Time goes by in an instant. Was any of it real? The memories of my childhood get fuzzy as I get older. I remember 1984, I was 11 years old. I had Voltron stickers all over the door to my room, and I watched Voltron every day on our small TV. I begged my parents for the Lion Voltron and I got the Vehicle Voltron. These are facts. I know them because I have held onto them, but these events only exist as memories, lost to time.

I am 44 years old now, almost 45. The release of a new, classic-style, combining Voltron toy brings me back to those early years, but the journey back also brings back some of the pain, the longing for a time that will never be again. A time before the internet, before cell phones, before girls, heavy metal and cars, when life was simple, when a TV show could distract me from the eroding of family life. These dumb little robots kept me occupied while grown-up problems were happening that I would only learn about as an adult.

Voltron remains a symbol of innocence to me. I can't remember much of the show, or the story from the original Voltron, and the few times I have tried to watch the english version I just cringe at some of the voices and dialog. But I knew at 11 I was into it. It's ok to let it go, in fact I prefer to. GoLion is a bit better, but the most recent Voltron Legendary Defender show actually has a good story and decent voice acting. This is going somewhere, just hang in there.

This new combining Voltron toy is 16 inches of nostalgia, but some of it was too much. The voice clips that activate each time you breathe on it just contradict with what I like about Voltron. I turned that feature off for most of this review. It's better left in 1984 if you ask me.

It was a giddy, frustrating few weeks until I could find all the lions at retail. I got the first two from Playmates Toys directly as samples (Thank You!) and I easily found the Black and Green ones at retail. But the Blue Lion was a pain in the ass, as you can read it its own review. 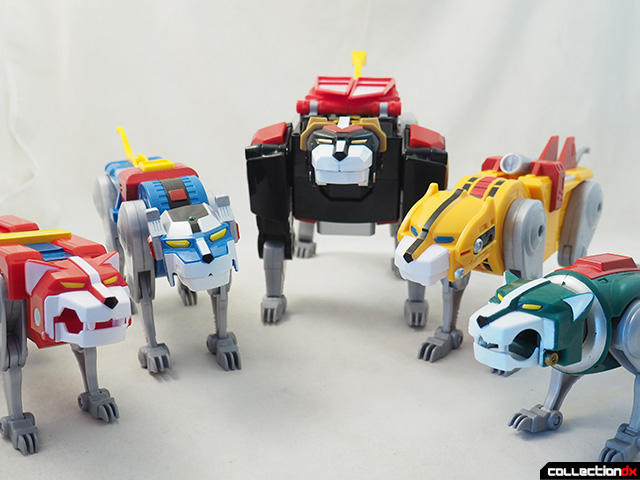 Playmates did a good job. Combining Voltron is like muscle memory. It can be done eyes closed, one hand tied behind the back. Each leg clicks into place securely. Sound effects go off with each limb, specific to each limb, and then continue to go off for no reason. Like the previous Legendary Defender, they should go off in an order, culminating with a final sound effect of completion. Not so. In this case it keeps making noises, sometimes repeating the same thing over and over. Pidge needs to shut the hell up. 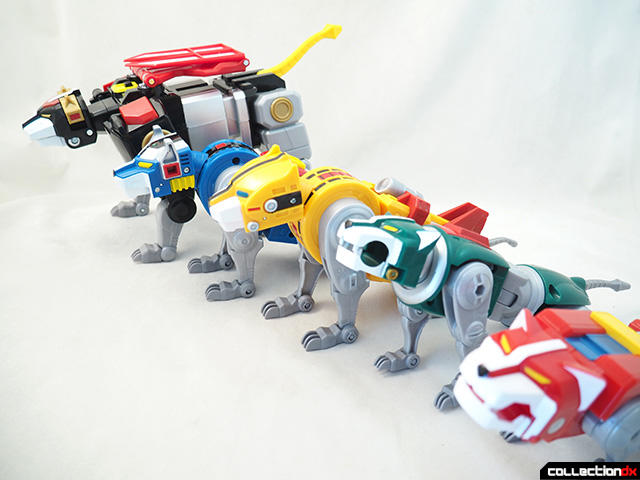 The chest lights up with the noises, but the eyes do not. If there is going to be a light-up feature, make it the eyes. 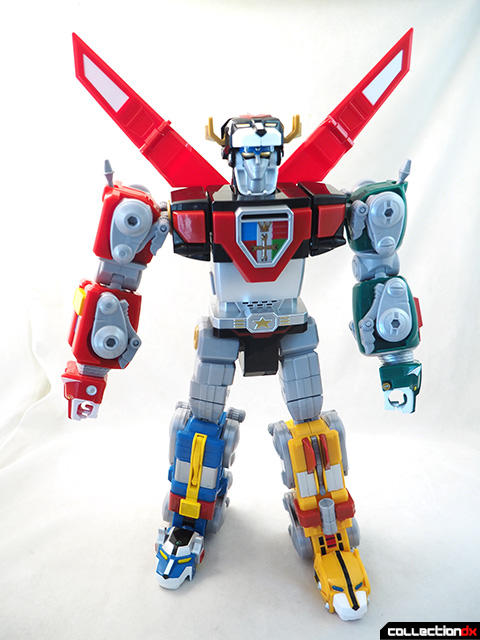 The completed Voltron stands tall and sturdy. He feels like a TOY. He's just missing some metal, some stickers, and firing fists. It's a classic design, with modern touches and materials bringing it into today's toy reality. 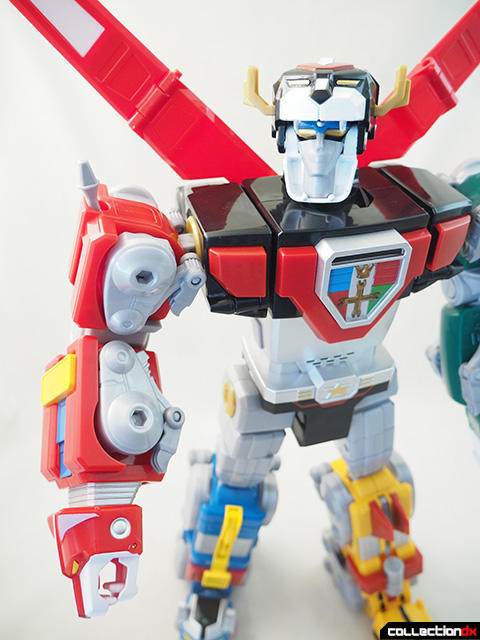 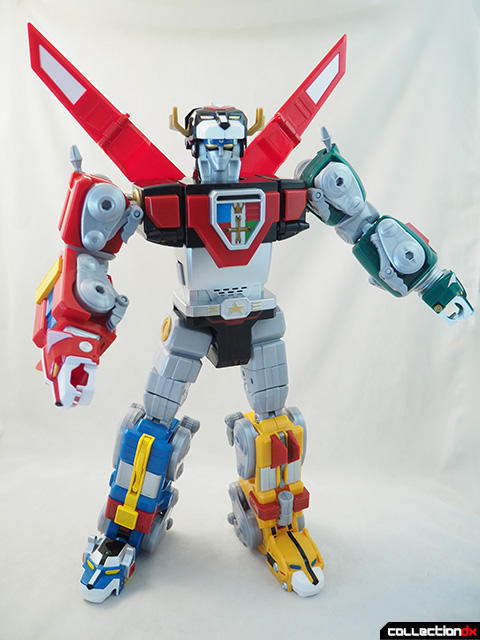 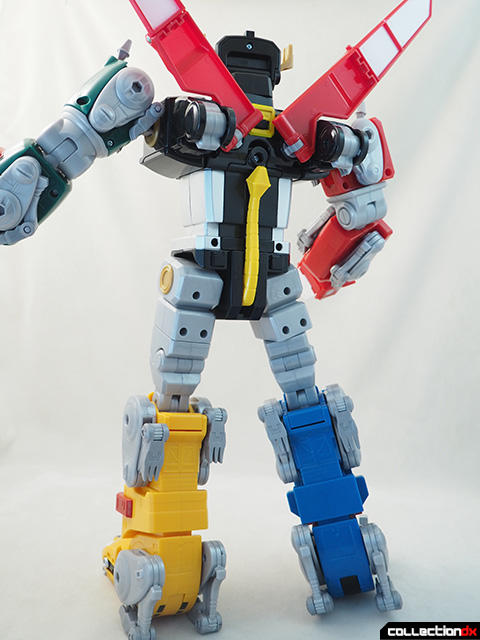 The Blazing Sword and shield that were included with the green and red lions can be held in place with mixed results. The sword fits well in the hand, with a tab that anchors it in place. However I can't get the same results with the shield, which refuses to lock in place. 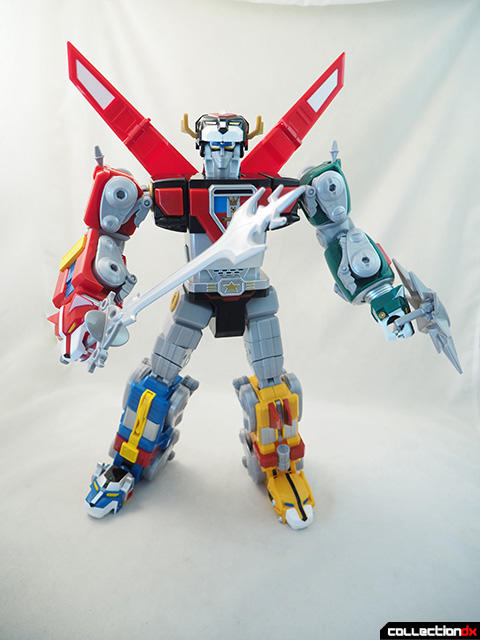 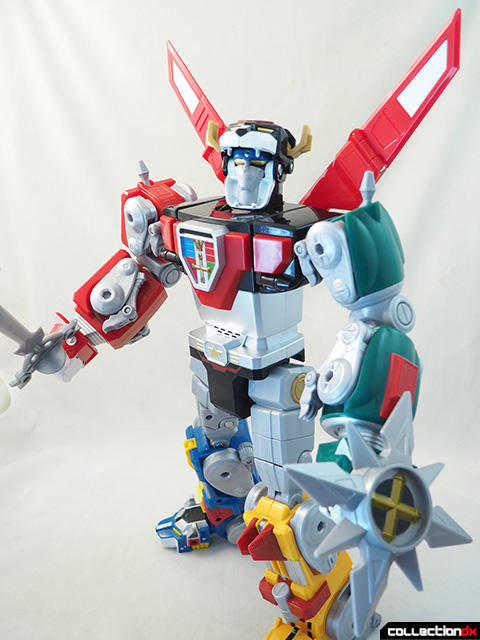 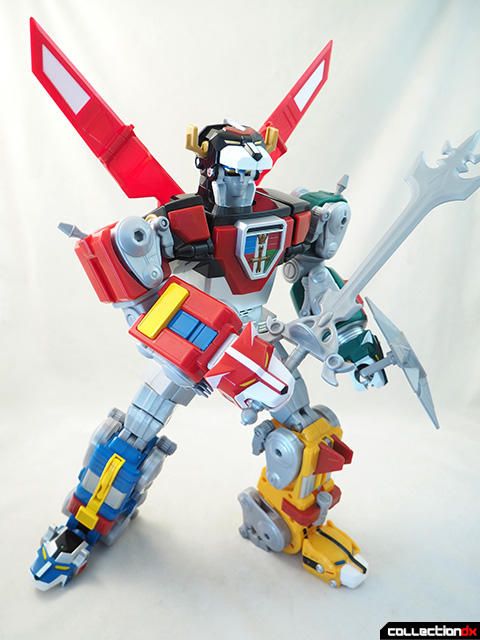 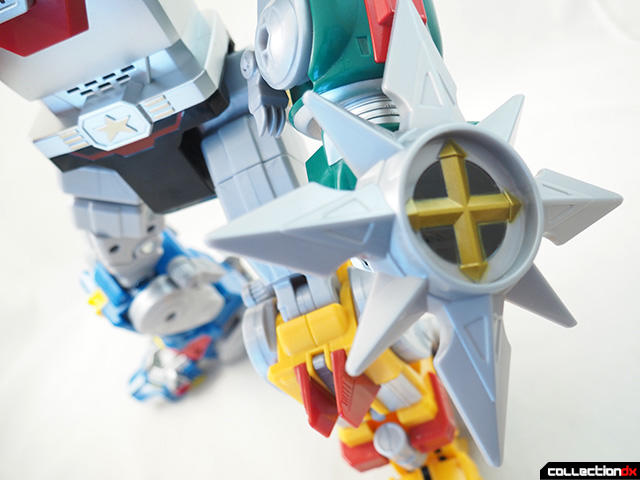 A glaring design flaw is the inability to move the arm up at the shoulder without moving the entire shoulder block. However I do like how they integrated the release mechanism for the lion into the red panel on the front. 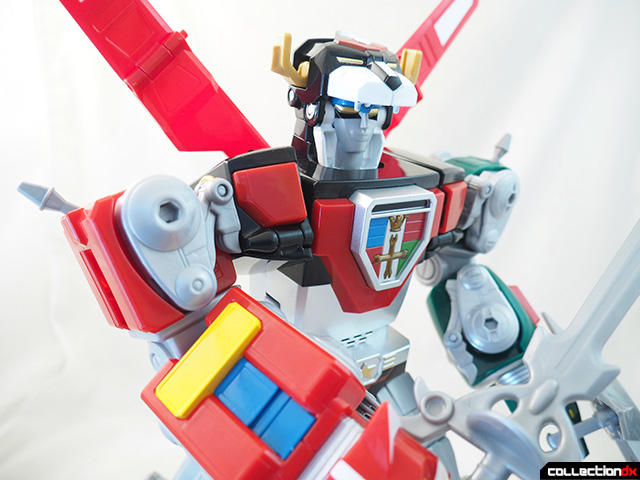 I'm a bit bummed that the paint was excluded from the sword, as it was shown painted on the package. That's kind of a Playmates thing I am learning. 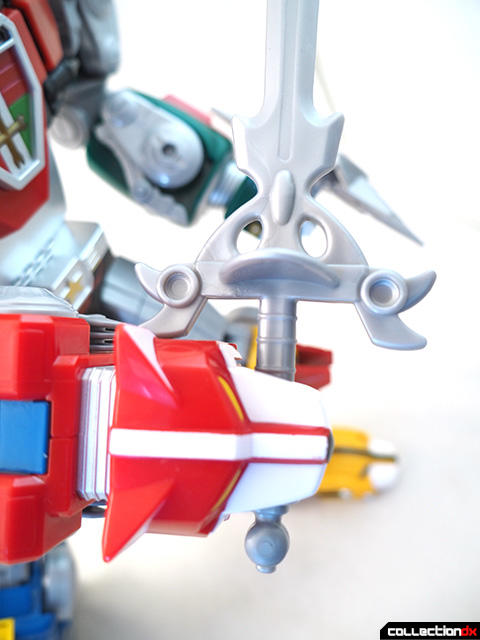 As you can see, the new Voltron towers over the classic Matchbox release. Still, I have a soft spot for the old toy, and I miss the heaviness that metal brings to the toy. 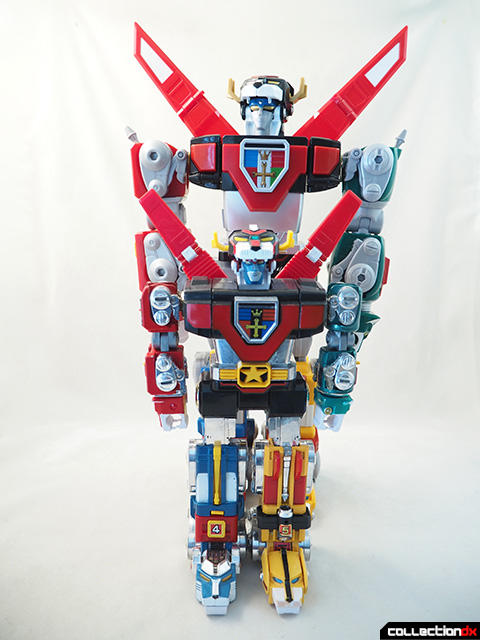 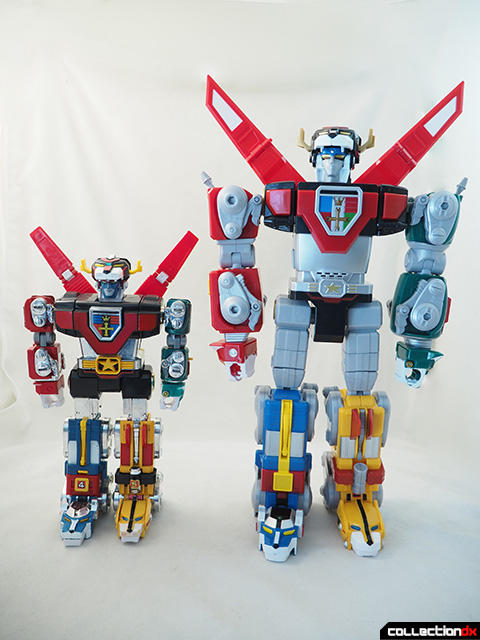 Next to the Legendary Defender, you can see just how much better proportioned the original design is. There is no contest. Why even redesign him at all? Voltron is essentially the perfect combining robot. The transformation has remained essentially unchanged since its creation, and the character was created with the toy in mind. 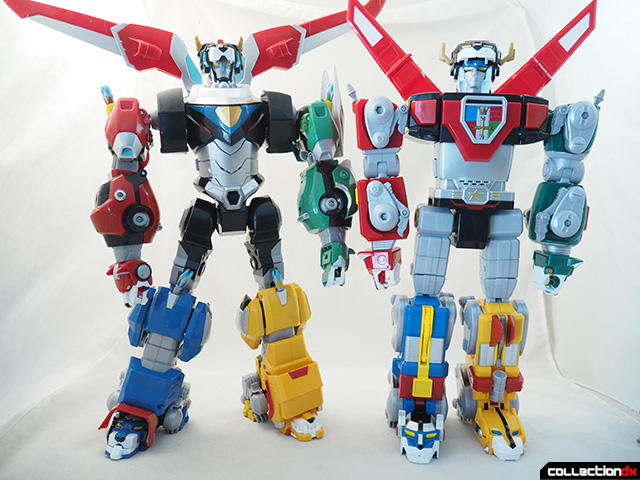 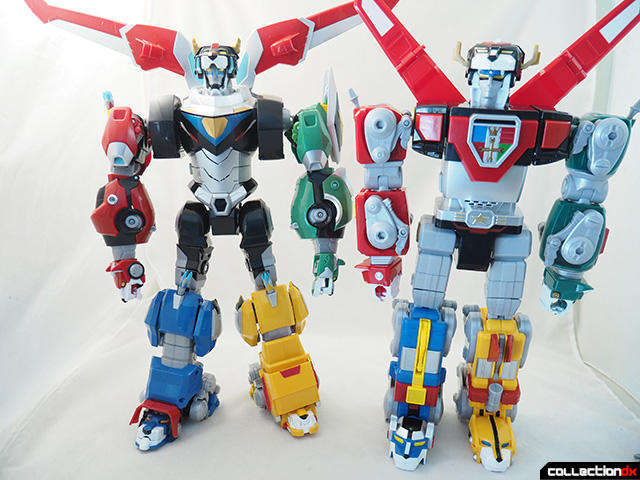 The big question I had when these were announced was if they were compatible with the previous release. Meaning, could the lions be interchanged between the Legendary Defender and the Classic version?

Well, yes they can, sort of. 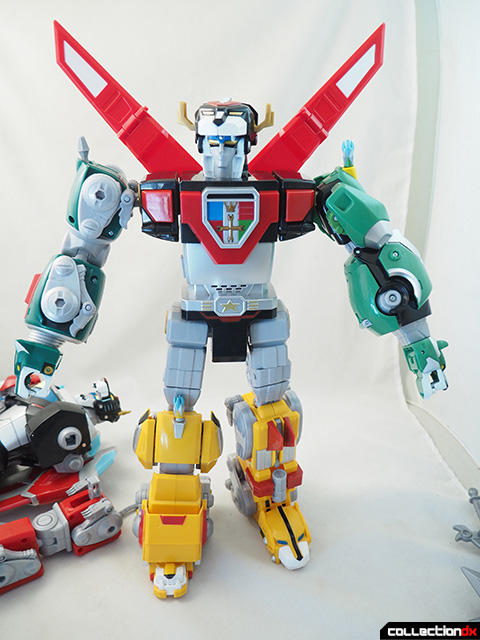 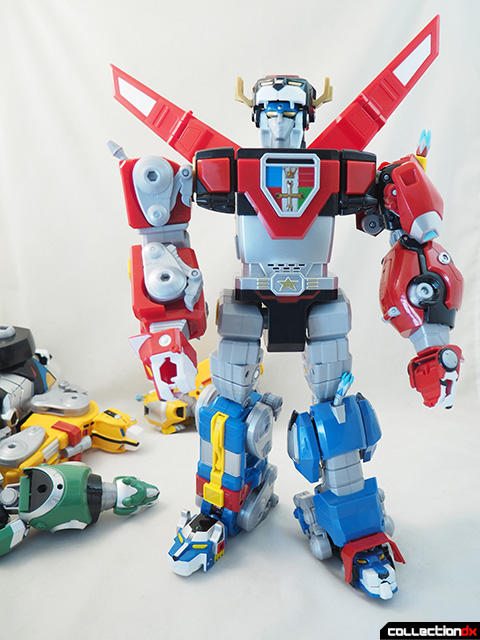 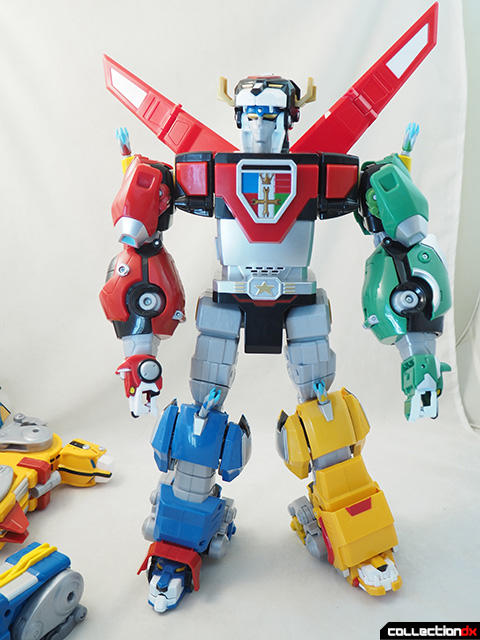 But I like that you can do what you can, it's an extra layer of playability for the toy.

Each lion needs to be bought separately, and of now there is no plans to release them in a box set like they did the Legendary Defender. The whole set will cost you just over $100 USD if you pay retail. Well worth it for what you get. Hopefully we get more updated classics from Playmates!

Again, it's not the Soul of Chogokin figure, but for $100+ and how easy it is to get, this works as a set. I especially enjoy how stable it is compared to the Legendary version. To be fair to the Legendary version though, I think the issues with its toys stem from the design not being made with toys in mind at all. It was simply made to be more modern & visually punchy.

Wow that intro is my childhood as well, right down to the years, incredible. Feel the same way.

I first saw a plastic model of Golion when I was just a little kid growing up in S Korea. It wasn’t until some years later in the US when I was reacquainted with Voltron on TV. More than it being a cool robot, it was a familiar friend from home that made my transition to my new home that much easier. Now almost 35 years later Voltron/Golion still has a special place in my heart. A lot of Really cool collectibles have come and left my shelf but this guy- well tbh the SOC VERSION OF HIM - will probably remain a permanent fixture alongside my Mazinger. Oh The power of nostalgia and that robot-lovin child that still survives within all of us. Thanks for the review.

I never thought I'd say it but this thing is almost too big. I love the fact that I can hand it over to my kids and not worry about it getting damaged, though. Props to Playmates for making a nice Voltron *toy* after all these years.
If we could swap out the sound gimmick and get proper shoulder rotation and bicep swivel, I'd have been perfectly content. But all in all a great piece and I'm glad I found all the pieces at retail.

It’s just great seeing such a nice Voltron, or any decent robot, toy at retail again. It’s not perfect, but it has deep presence. And is fun to play with. Both TRU and Walmart are dumping the lions at deep clearance, I think because Playmates stupidly gave them the same skis as the Legendary Defender ones. So Classic is coming straight from the factory to the clearance rack. Idiotic as they will be gone soon. But it means the robot can be had for about $60 complete. I was also able to grab the Legendary Voltron complete box set for $80 at the TRU clearance sale. Also Props to Playmates for packing in the full range of accessories. Everything we never got from Matchbox. Not just Lion Blades but painted Lion blades. Spring firing shoulder cannons. As was said everything but Rocket fists. The only real disappointment is the sword. It’s half the size it should be. Unpainted, and just feels wrong. Plus it tends to warp. Overall the perfect toy for a younger new generation robot fan with which to share the hobby.