I regrettably missed out on getting any Dark of the Moon mainline Transformers figures, nowadays I really want many of them, but when the line was on store shelves I was more into Gundam and collecting the miniature Medarot figures to have much money for Dark of the Moon, although I did try to get as many of the Cyberverse figures of the time as I could, a trend of collecting legends style figures that continues to this day.

One figure that I particularly regret not picking up was the deluxe Starscream, but when I saw that the new Studio Series Voyager Class one was an upscaled retool with a more accurate 2007 movie inspired color scheme and a less gimmicky accessory I knew now was my chance to experience the figure. As much as I’m not a huge fan of even the first Transformers movie, it is actually pretty nostalgic to me so having a new rendition of his appearance in that movie is actually a pretty big deal to me even though I don’t particularly like movie Starscream’s design.

In jet mode, I feel like, for a Voyager or deluxe figure, the mode couldn’t be better realized considering the overall accuracy of both modes. The undercarriage is pretty unobtrusive unlike the 2007 mood, robot mode parts such as the hands are not visible unlike the 2009 mold, and the color scheme is a lot closer to the film than the 2011 mold. In every way I feel like this f22 raptor mode succeeds, and for that I really really like it. It’s also a pretty good size which I really like, he looks good with his deluxe wavemates Crowbar and Stinger. 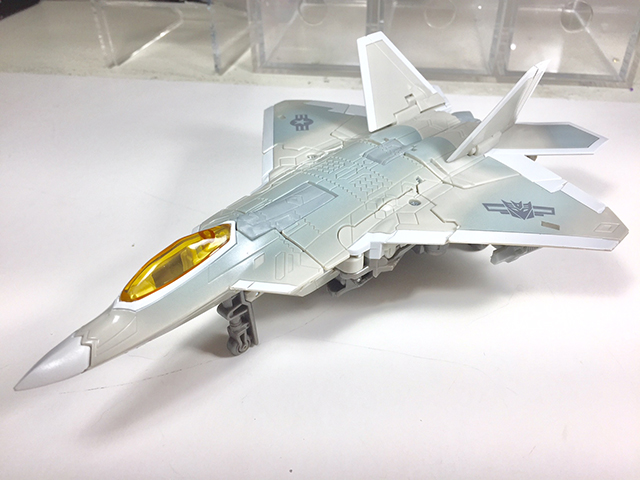 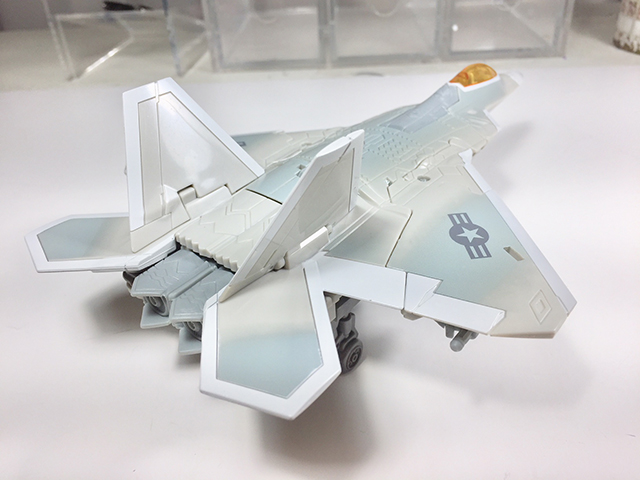 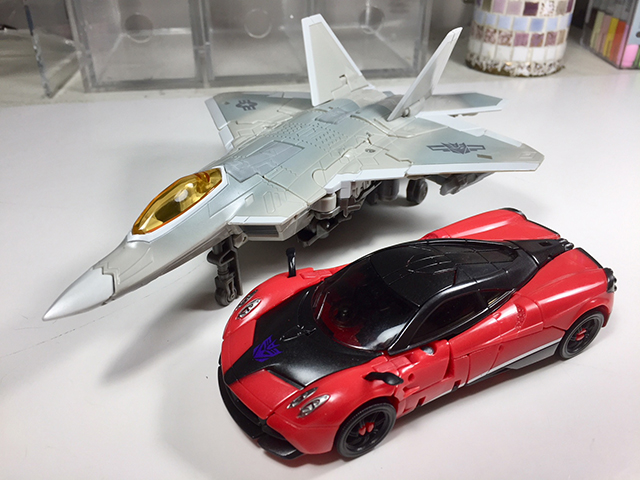 Starscream’s transformation is exactly the same as his 2011 deluxe incarnation, but since I haven’t experienced it before now, I was really impressed. The way the whole jet mode aside from the back folds up into his unique Dorito body shape, with the visible layers of panels on his back just like he has in the movies is really amazing engineering to me, and I think it’s so fun to transform! The arms and legs are less impressive as they just decompress for robot mode, but they all look so accurate in the end. I don’t want to go into too much detail because I want you to experience the transformation on your own, but if you couldn’t tell I love it! One aspect that is a huge improvement over the original release of this mold is the added chest parts showing more of their complex detail, having them cover up the unsightly gaps in his chest was a great idea.

In robot mode, Starscream is very well detailed in both the complicated sculpted detail and the impressive abundance of paint apps, although he is primarily gray and beige, the varying shades of both colors make him look a lot more visually interesting than he could have been and I really appreciate that. The only point I could see any improvement in is his eyes, although the head itself looks great, the beige parts that go over his eyes are painted red, making the eyes look much bigger than they should be. It doesn’t look bad really, it’s just not very accurate and the eyes aren’t sculpted that way. Not a huge deal though! 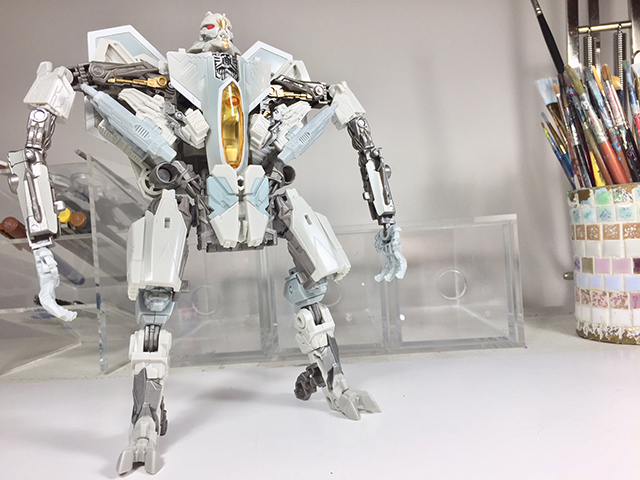 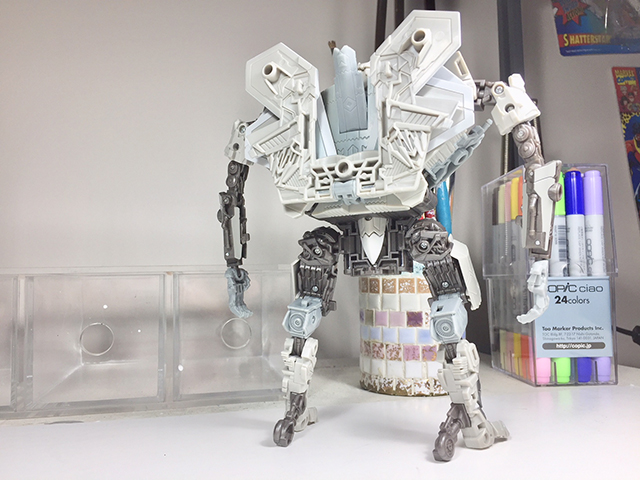 Although the level of detail is pretty amazing for a Voyager class figure, the standout aspect of Starscream for me is his articulation, as it is far beyond any recent Transformers figure from the Studio Series or otherwise. Particularly in the shoulders and arms, a huge variety of gestural and dynamic poses can be achieved, and although due to his small feet the figure can have trouble standing sometimes, the articulation is still very useful and abundant. There is even a designated neck joint so Starscream can look up, I really appreciate that. A great way for this articulation to be utilized is with Starscream’s weapon, a vicious blade surrounded by missiles. It can be affixed to his arm by folding his hand in and plugging it into Starscream’s wrist, or through the myriad of hard points throughout, making this weapon a very film accurate and versatile accessory, I really like it! In his alt mode, it can store in the back, but it kind of sticks out so I don’t usually put it there. 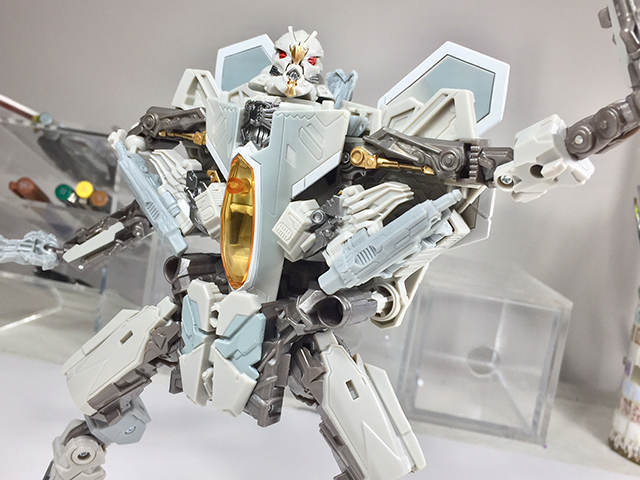 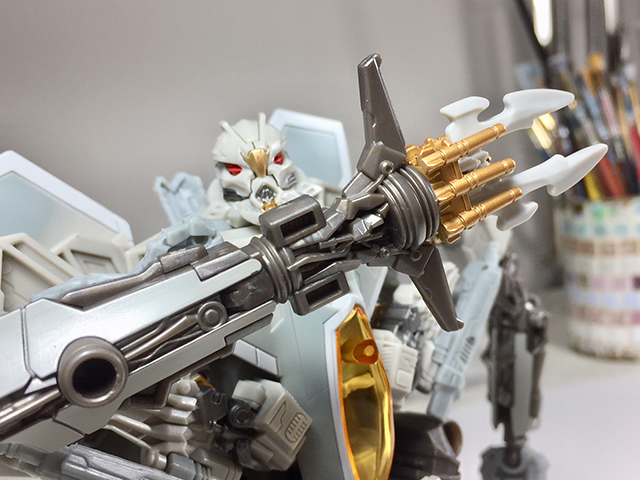 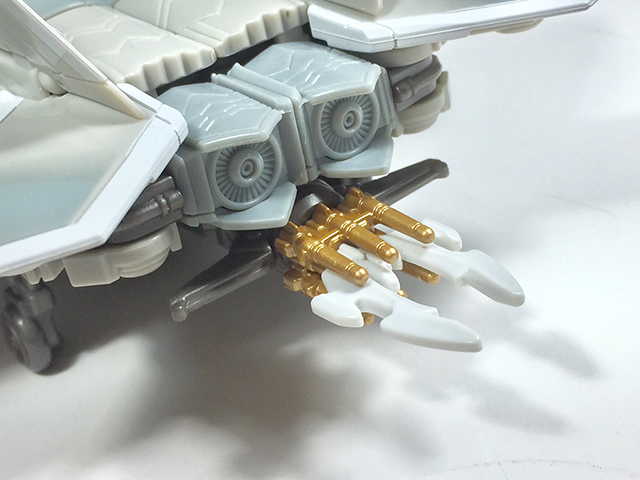 As far as robot mode size is concerned the Studio Series’ focus is clear as ever, as Starscream is suitably tall and wide, much more so than his wave mate Optimus Prime. Starscream looks great with Stinger and Crowbar, I can’t wait to see what he looks like next to wave 2’s Voyager Megatron 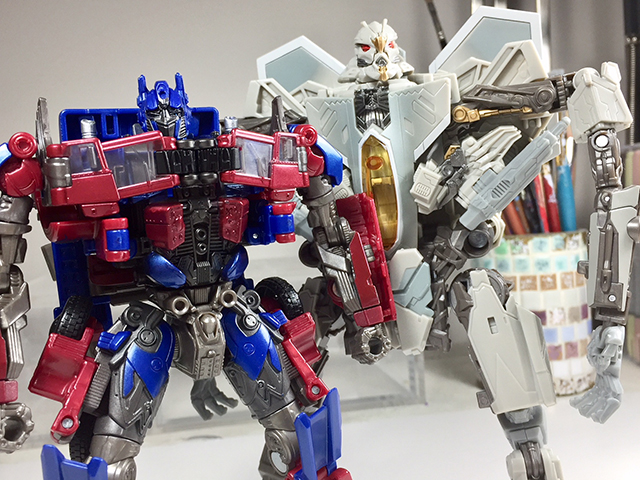 Overall I couldn’t be happier with Transformers Studio Series Starscream. His size, articulation, and detail are all very impressive, along with a transformation that is both fun and inventive. It takes a good mold and through upscaling and subtle retooling, makes it even better. I know this design may not be for everyone, but for people who aren’t bothered by the design, or really like it, I can’t recommend Studio Series Starscream enough. This is definitely another great Voyager class figure for the Studio Series!

I agree, the SS Starscream mold is a suitably nice one.  The paint applications are spot-on, the articulation is great (including in his two-joint knees), and the molds are top-notch for a Bayformer despite being a scaled-up version of the original 2013 figure.  It seamlessly fits in right next to all the dedicated Studio Series figures.

Only problems I have with it is getting the wings to telescope up/down on those waist pistons while in vehicle mode, and unpegging the back horizontal stabilizers from the rest of the jet's back end.  And, yeah, the undercariage kibble doesn't help much, considering the larger SS Leader-class Blackout managed to not show ANY kibble from the sides or top in helicopter mode.