When it comes to Valkyries and their numerous accessories, a full armor pack is part of the DNA that permeates the Variable Fighter lineage. As such, the third episode of Macross Zero featured the eponymous VF-0 wearing a predecessor to the VF-1's fan-favorite equipment. And while the "Reactive Armor" set was represented as one of Hasegawa's fully-articulated Battroid model kits, it was curiously absent from Yamato's then concurrent line of 1:60 scale Macross Zero toys.

Yamato's death and rebirth into Arcadia brought along a relaunch of VF-0 based merchandise, with their single-seat type Phoenixes looking primed and ready to receive the full-armor treatment. And while it took some time for this to come to fruition, the VF-0 has finally gotten its new clothes just in time to steel itself after Arcada's recently teased all new Sv-51 transformable toys. 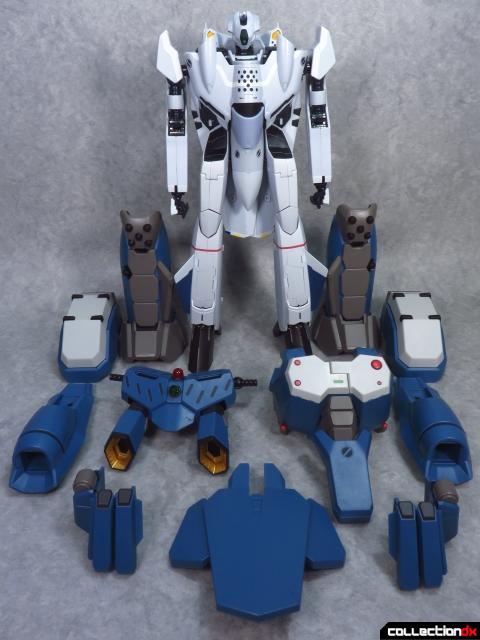 The officially named "Reactive Armor for VF-0 Phoenix" set is straightforward package of Variable Fighter accessories. You get eleven pieces of plastic armor that are all ready to be attached to Arcadia's VF-0A Shin Kudo type or their VF-0S Roy Focker type. And while the latter is the only Valkyrie to be depicted wearing the equipment in animation, I will be using my Shin type for this review so think of this as a PSP game-inspired alternate scenario.

Note that before installing the armor, you do have to swap out the default dorsal fuel tanks for the pair with extra slots. 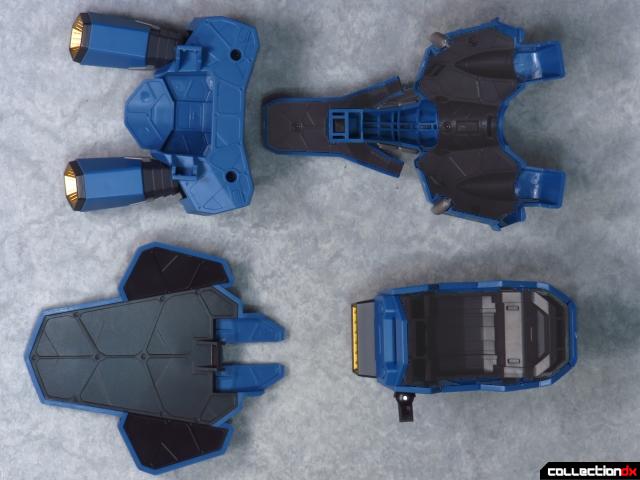 The fit and finish of the Reactive Armor parts is easily on par with Yamato/Arcadia's previous 1:60 scale Macross accessory sets. Each piece feels solid, with excellent detail on both the visible exterior and the interior where bits attach to the Phoenix itself. 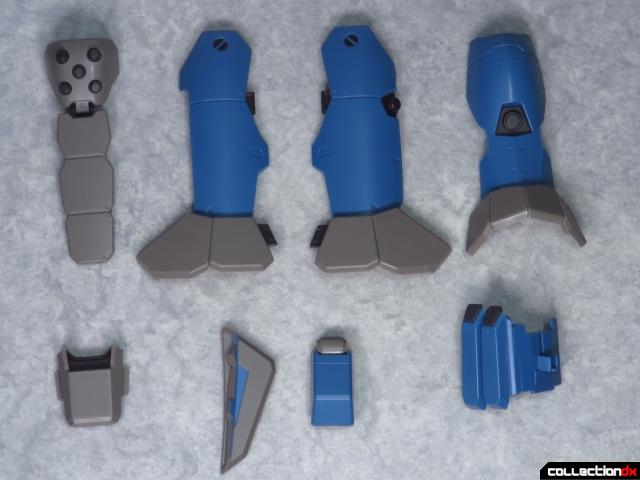 As with other Valkyrie parts sets, certain pieces can be broken down further for when its time to armor up the VF-0. In fact, the leg armor manages to go beyond what is needed by splitting into six(!) parts, which includes the front ankle guard and the cover for the leg fin. Contrary to what the instructions say, I found it's much easier reduce each leg assembly down into three parts rather than six. In addition, each hip armor piece breaks down into two parts with the outer grenade rack actually tabbing through the intake guard and into the leg itself to lock both pieces in place. 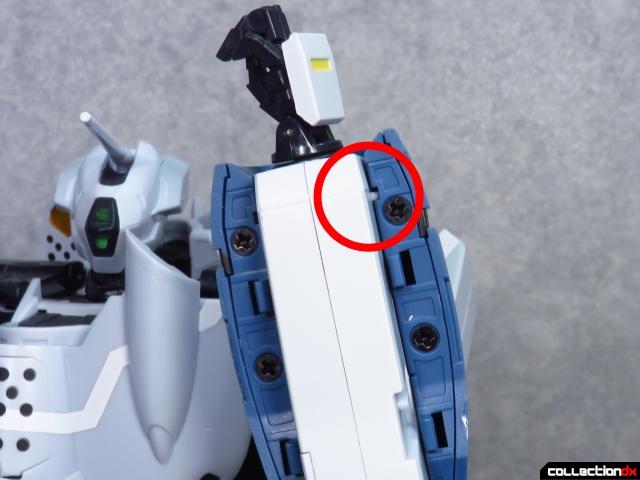 The large reactive armored shields can be attached on either side of the VF-0, even though its arms are slightly asymmetrical. A small slot in the armor accounts for a tab used during the Phoenix's transformation to fighter mode. Oddly enough, this arrangement makes the left forearm armor feel more secure than the right as the extra tab prevents the piece from sliding up and down. This isn't a huge issue as the right arm armor part only moves a little bit when handled, but it is a weird oversight with the design. 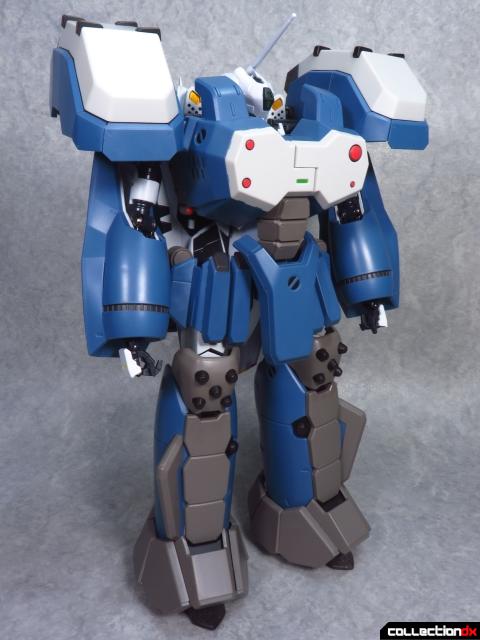 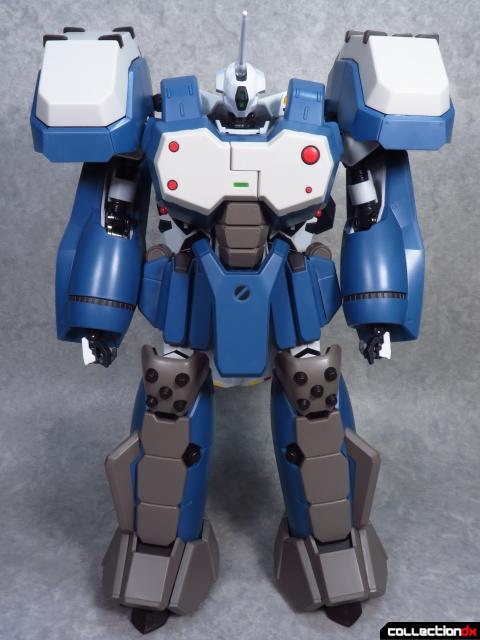 The VF-0 invokes the classic image of an Armored Valkyrie while adding its own unique touches to the design like separate reactive armor plates along the shins and forearms. Unlike in the OVA, the plates cannot be removed to simulate the true-to-life action of the armor blasting off when hit by enemy fire. 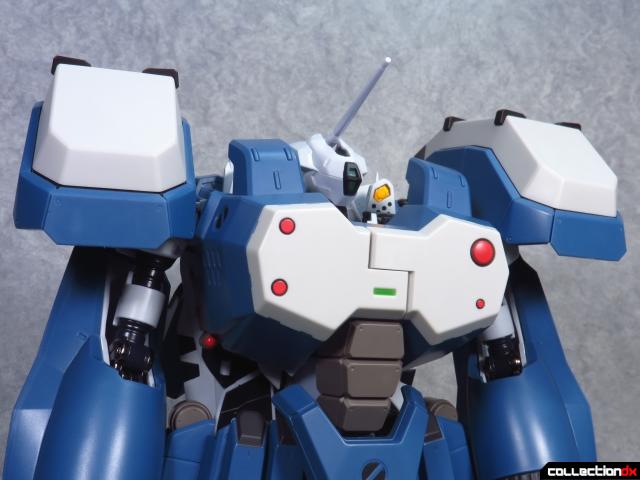 And while the painted surface details are all spot on, Arcadia's tighter budget for tampographed markings means the large red triangles that should be on the shoulder launchers have been relegated to stickers. This is not a deal breaker by any means, but it is a little disappointing given the price of the set. 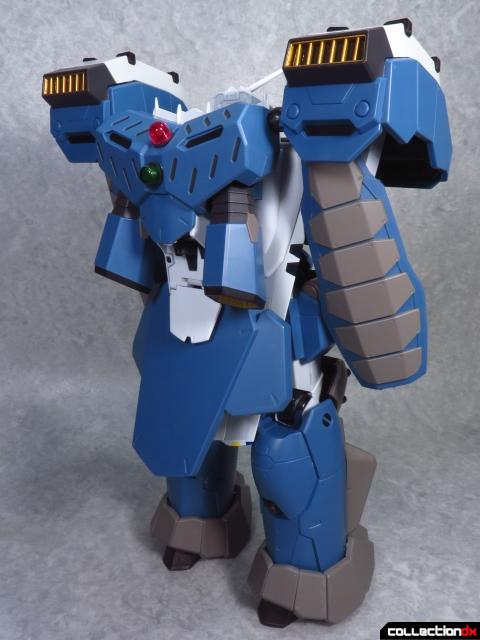 Overall, the toy holds up under all the extra weight thanks to how each piece clips or tabs onto the Valkyrie using slots unique to Arcadia's VF-0A/S. These factors, coupled with the fact the newer Phoenix has revised proportions, means the Reactive Armor is not compatible with the older Yamato VF-0 toys. 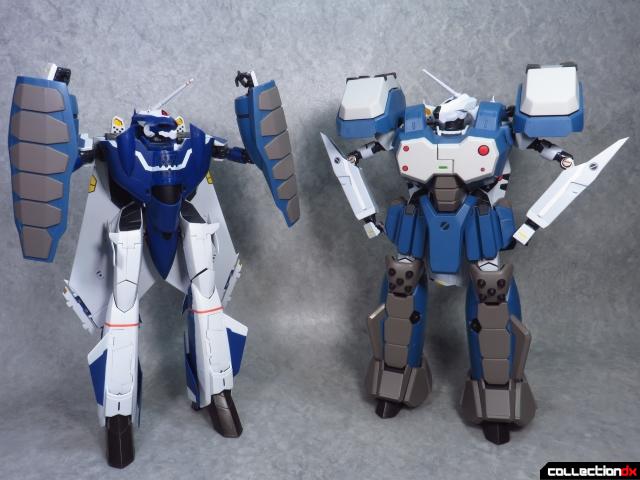 And for similar reasons, Arcadia's two-seat VF-0D with its redesigned legs and extra fins also cannot fully utilize the armor parts. However, the arms are identical on both types of Phoenix so there is a small level of cross compatibility. 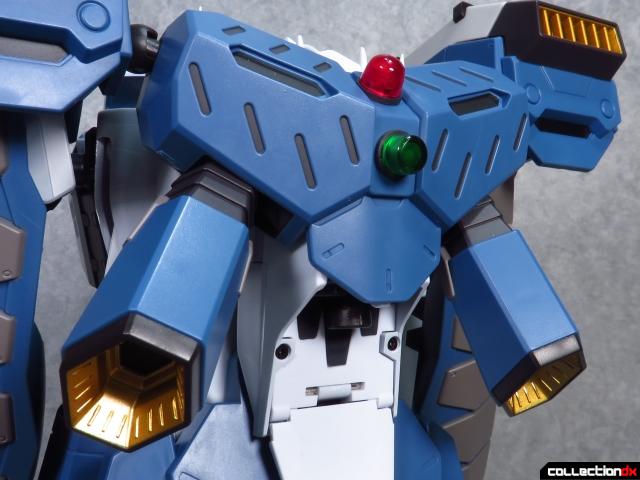 The Reactive Armor provides its own array of gimmicks to bolster the base VF-0 toy. For starters, the backpack features a pair of ball-jointed rocket boosters for hovering action. Also, check out the clear parts used for the red and green warning lights, which is a nod to how real-life carrier born vehicles are equipped. 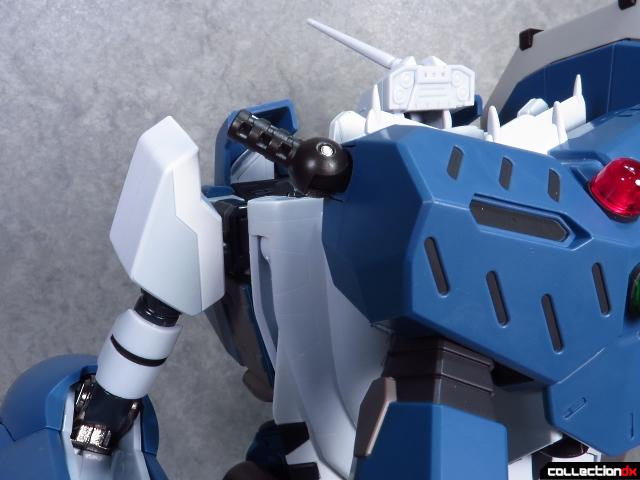 The shoulder missile launchers attach to a pair of universal joints mounted on the upper corners of the backpack. The joint itself has one round end and another more squared off end that angles down into the part itself. 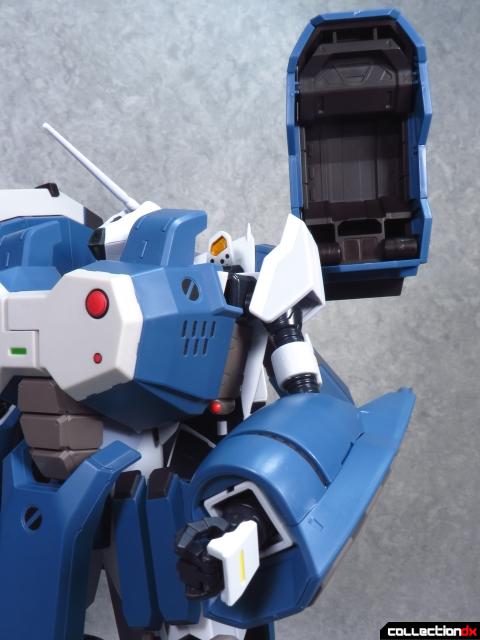 The resulting arrangement allows the beefy shoulder pads to float just above the VF-0's own arm without being anchored to it like on the VF-1's GBP-1S armor. As such, the toy can achieve more natural poses without the missile launchers pointing off at weird angles relative to the main body. 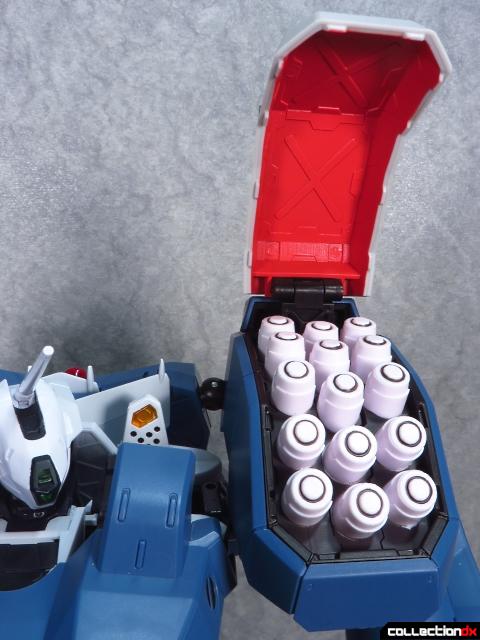 For Itano Circus power, each shoulder launcher opens up to reveal a bank of fifteen non-removable missiles. There's a good amount of sculpted detailing both underneath the moving cover piece and within the rack of warheads themselves. 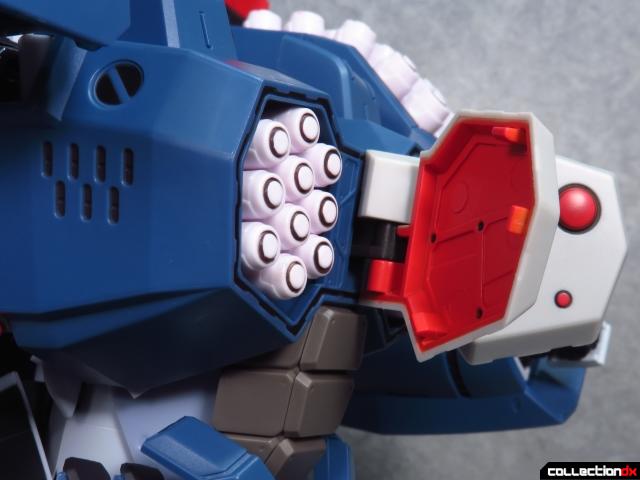 The chest missile launchers are similarly detailed. Ten missiles wait primed and ready on either side of the Phoenix's chest armor. 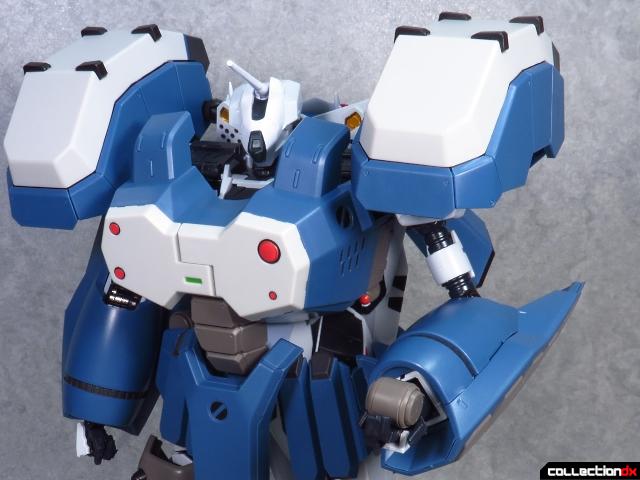 Rounding out the Reactive Armor's weaponry is a pair of grenade racks mount on the Battroid's hips. At the top of each rack is removable soda can-shaped explosive, which can be held in the toy's hands. 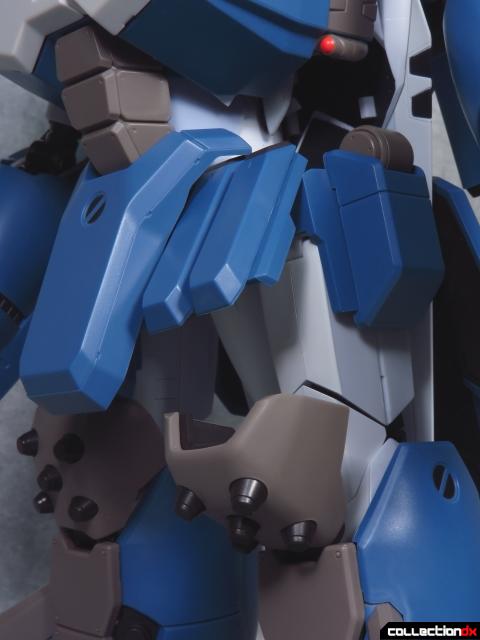 The fronts of the intake armor feature a hinged skirt flap to allow the figure's Gerwalk joint space to swing forward. In addition, the main torso armor has a poseable groin piece, whereas the main leg parts have hinged knee guards. 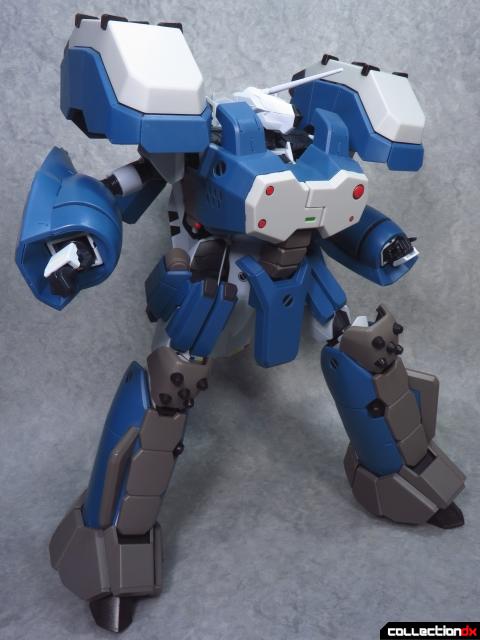 All told, the fully equipped VF-0 maintains a good amount of articulation despite the bulkiness of its armor. 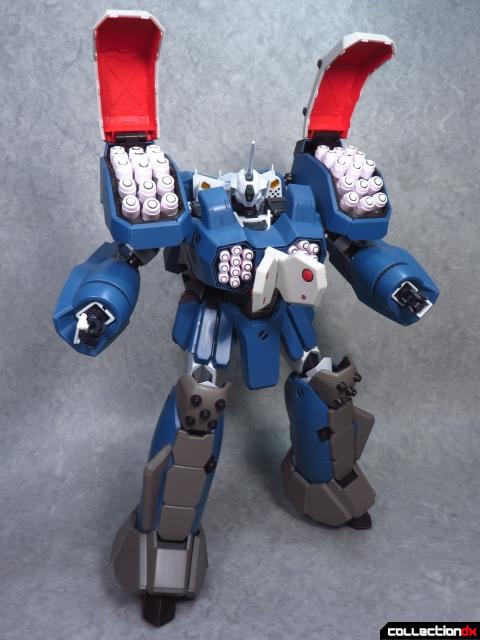 Not that the Reactive Armor Phoenix needs to do much besides brandish its multitude of missiles and pretend to hover around like in the anime, but I appreciate that the potential is there for much more. 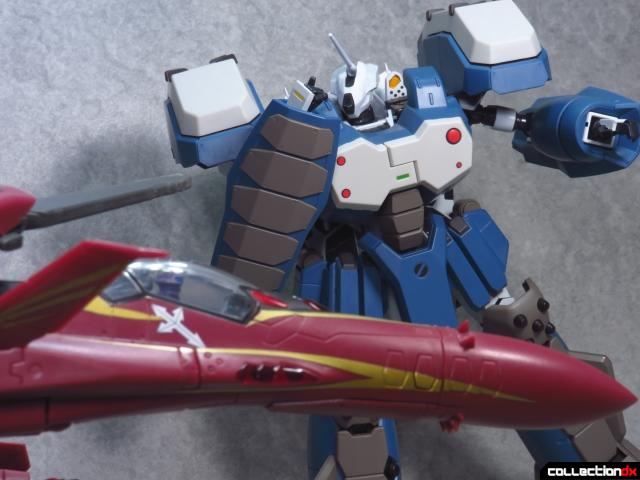 "Aw how cute! The little boy got new clothes for school!"

"Damn! This crazy woman is persistent!"

For instance, I can recreate fight scenarios from an intense session of Macross Ultimate Frontier in where Shin faces his nemesis the same way Roy Focker fought D.D Ivanov. 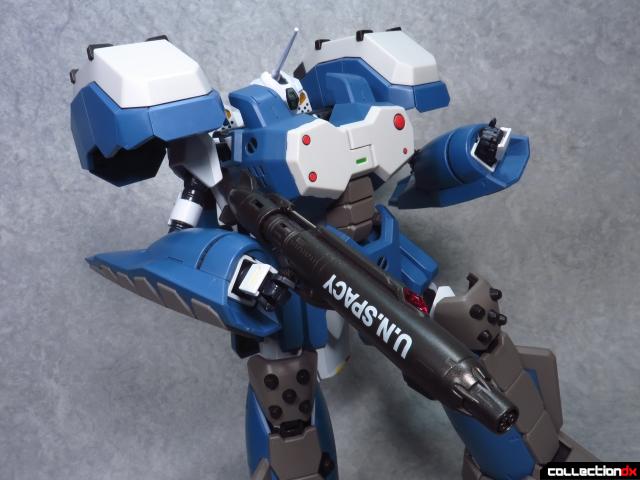 If there is one major failing to the Reactive Armor set, it's fact you can't really use the VF-0's gun pod in conjunction with the chunky arm parts. Now, while the hands on the base figure can be easily removed like on other Valkyrie toys, but Arcadia has not utilized this feature to provide bulkier fixed-pose hands. It is possible to have the Phoenix awkwardly hold its main firearm at an angle, but the result is a far cry from the badass scene of Roy's using both his VF-0's head lasers and gun pod to counter a volley of missiles from D.D.'s Sv-51. 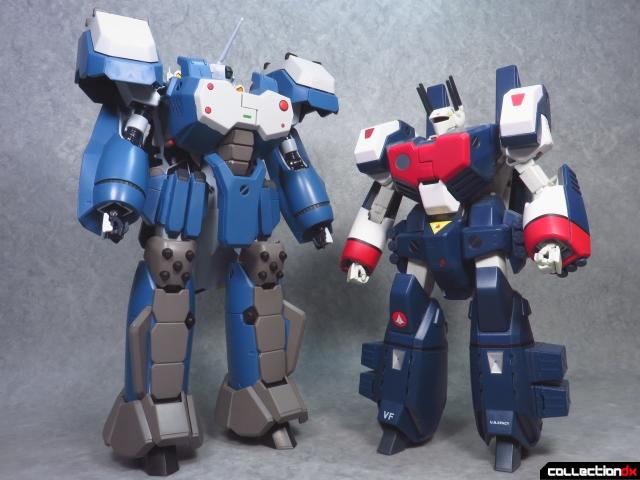 Gripes aside, Arcadia's Reactive Armor set is every bit as good as Yamato's GBP-1S set in terms of build quality. Putting the two together makes it clear to me that elements of the VF-0's equipment takes cues from an early design for the armored VF-1 Valkyrie, such as the rounded weaponless arm shields and soda can type grenade racks. 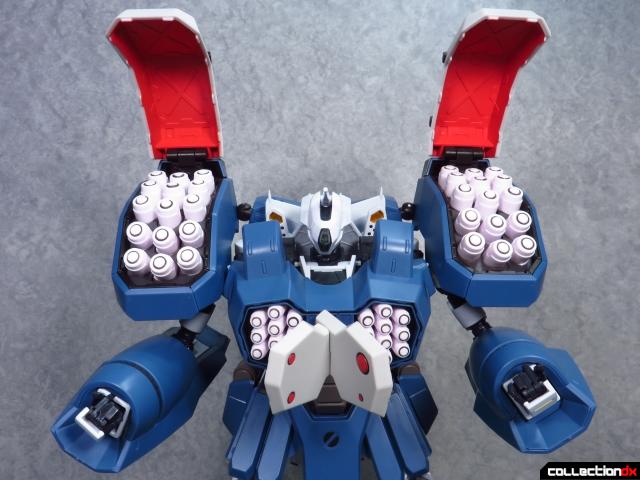 Overall, Arcadia's Reactive Armor pack is a solid execution of something Macross Zero fans have been waiting for a long time. With the set in hand, the Arcadia VF-0 can uphold the long-stranding tradition of going from a sleek fighter jet to a hefty robot bruiser. Unfortunately, the standalone equipment carries a price tag that is as equally hefty, a whopping 17,800 yen. Given that the base Valkyrie costs roughly $300 USD, adding the price of what could easily net a whole high-end robot toy by itself for just an accessory set will (understandably) turn away the more casual Macross fans. Still, I am glad that Arcadia was able to rise from the ashes of Yamato Toys to properly complete the VF-0 Phoenix.

Nice what a beast.