Coming at the tail end of the Gundam Iron Blooded Orphans anime, the Gundam Bael is Mcgillis's final mobile suit used in the series, and takes elements from his Grimgerde's design and applies them to the typical ibo Gundam's making for a very unique overall design that I think looks awesome!

While many keynotes of the design seem adapted from the Barbatos like many other ibo mobile suits, many design aspects such as the lack of a traditional v fin, and abnormally blocky feet serve to give the Bael it's own identity. The other major difference are the Gundam Bael's wings, which while thin and not very impressive, still look very unique and have lots of articulation, meaning that they can be oriented to suit any pose. 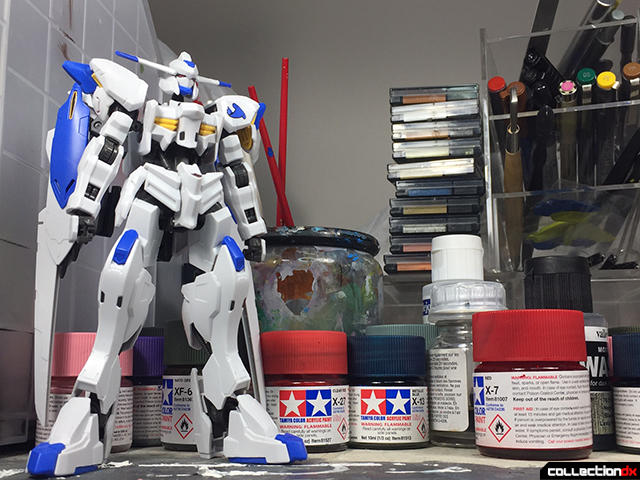 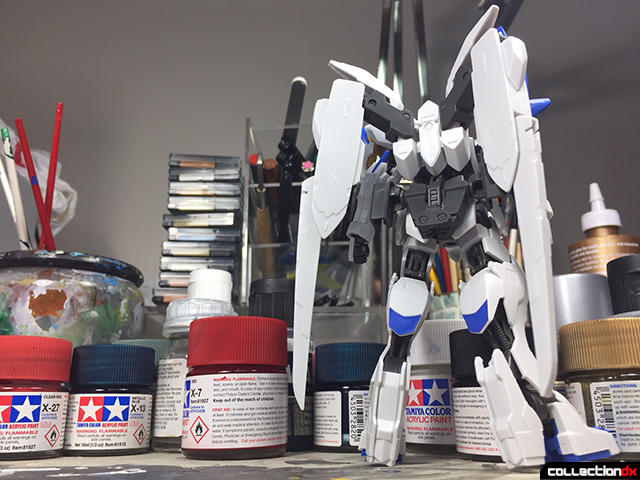 The Gundam Bael's sole accessories are his dual swords, which with their larger hilts and longer blades makes them an upgraded version of the Grimgerde's. The suit's articulation is just like any other ibo high grade sharing it's inner frame,(so, great) meaning that it can use the dual swords to great effect. They can be stored on a multi jointed armature mounted on the Gundam's back skirt and this, like the wing back pack can be removed for a more streamlined appearance. 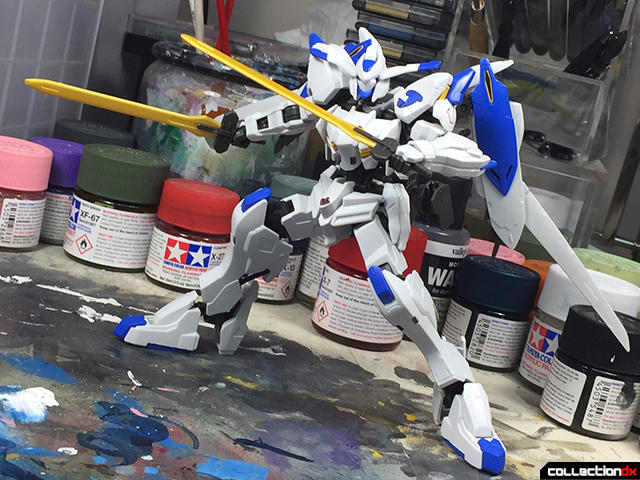 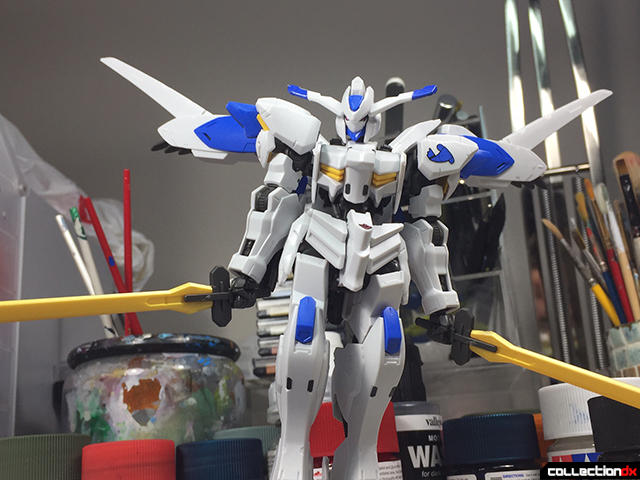 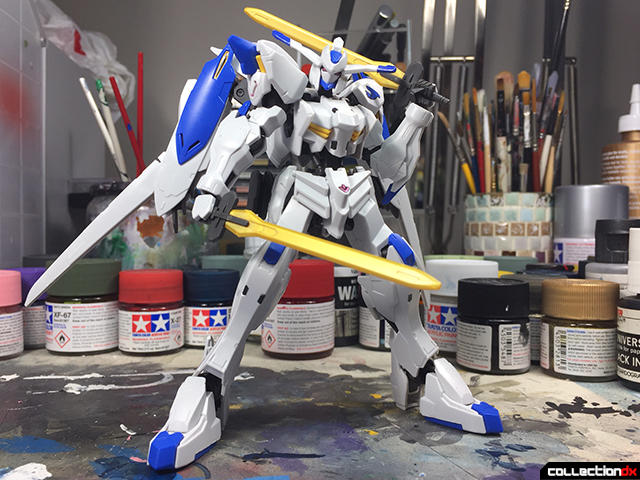 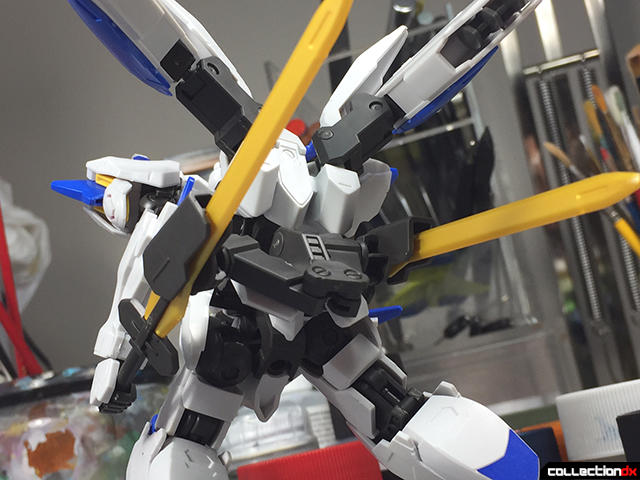 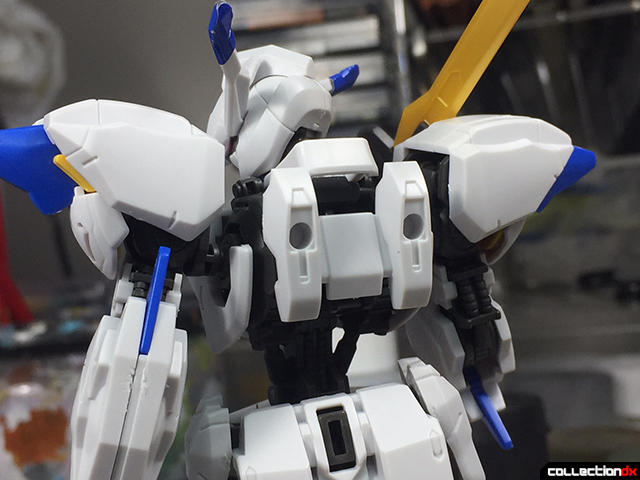 The Gundam Bael's color scheme is primarily white and blue, typical for a Gundam, but with a little yellow that keeps it from being monotonous. Other really great visual details are the pink detail etched into his shoulders, reminiscent of the Barbatos and the original symbol of the Gjallarhorn on it's left shoulder. The stickers supporting this color scheme are numerous for sure, but not that annoying. There are many small gray and pink details that require stickers, but none of them are difficult to put on, or problematic. The only stickers posing any sort of concern, are the two stickers seen on the tips of the Gundam's unusual "V fin". They stay most of the time, but can be subject to peeling every once and a while. 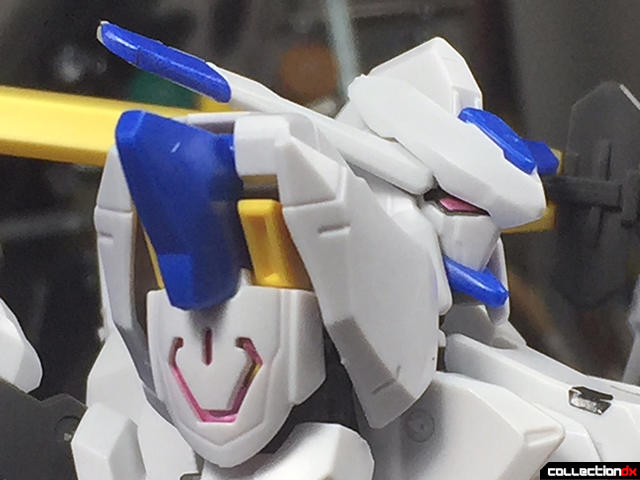 Gundam Bael's height is actually atypical for a High Grade, as he is really tall! This definitely makes him look more impressive as, the Bael did end the Calamity war after all. 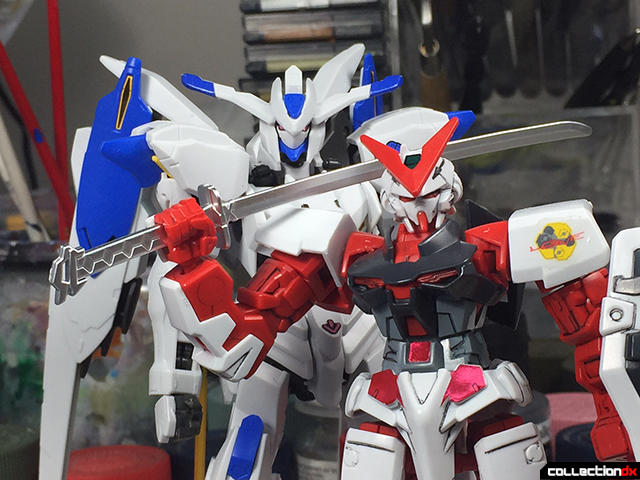 Good review, interesting design. Definitely looks like a Gundam, but the colors & backpack remind me of Tallgeese III.