My Melody is a cute character created by Sanrio in 1975, one year after Hello Kitty. A female rabbit, she wears a hood over her head and ears. This hood is usually red, as it was originally, but is sometimes pink or other colors. According to the official Sanrio website, she "was born in the forest of Mariland. Her favorite hobby is baking cookies with her mother, and her favorite food is almond pound cake. She enjoys eating cake with her best friend, a mouse name Flat."

I don't normally collect cute characters but a few months ago someone posted the commercial for this toy on Facebook and I showed it to my girlfriend, thinking it might be a fun way to introduce her to the wonderful world of gokin. To my surprise, she was already well familiar with, and enamored of, the character so I asked Josh to keep us in mind should he happen to get a review sample.

My Melody comes in a compact box with simple line art of the character on the front, as well as the designation "aka" (red) to indicate which color hood she's wearing. This would clearly lead one to believe that other versions on are the way. 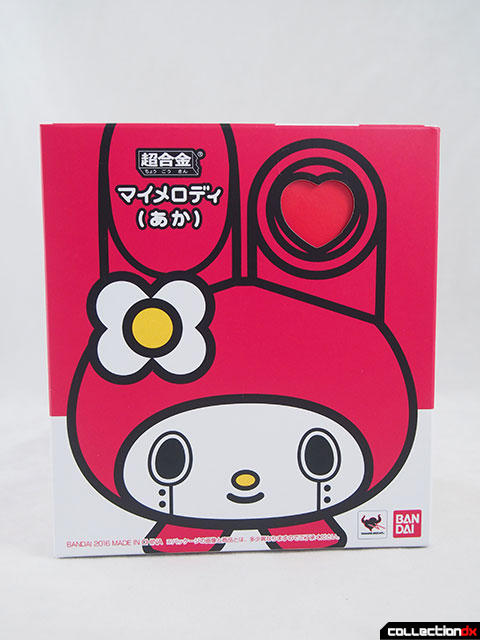 The back of the box has many pictures to give you an idea of the toy's capabilities. 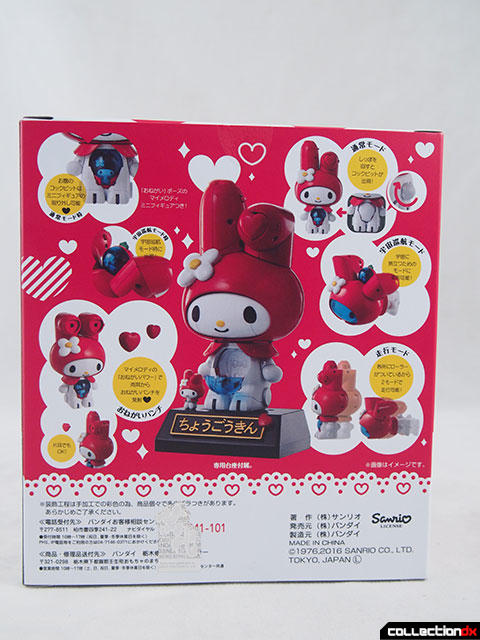 The toy is packaged like most chogokin, resting in a styrofoam tray, which is surrounded by a glossy slipcover. 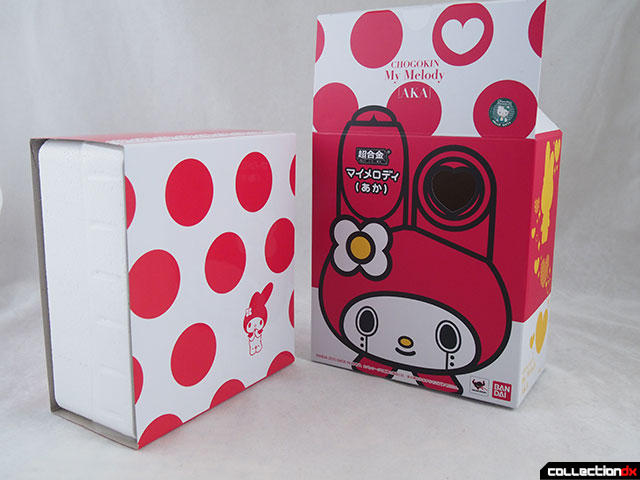 Once out of the box, she stands just a hair over 5" tall, from toe to the tip of the ears, both of which feature two points of articulation. Each can be turned such that they are pointing straight up, at an angle or are bent. 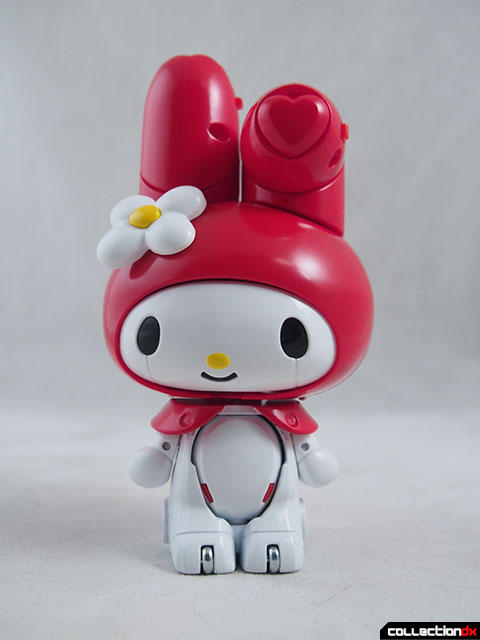 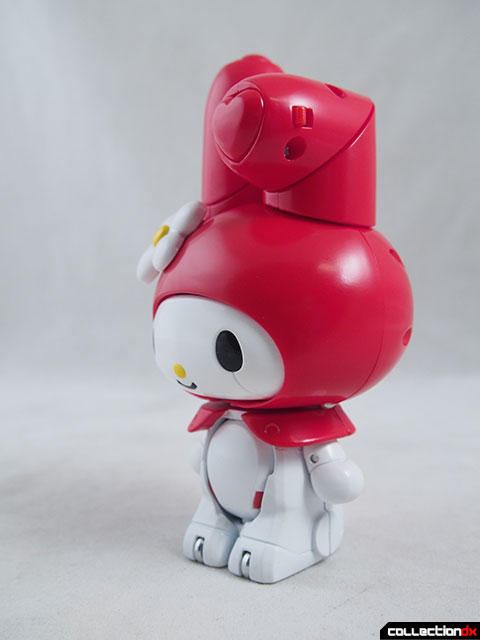 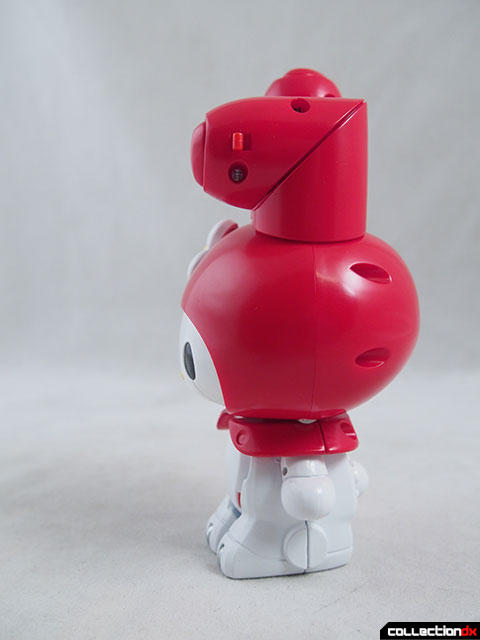 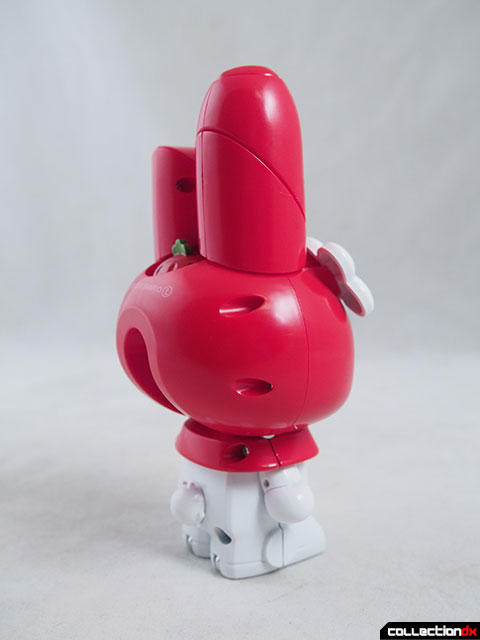 While the head and ears are entirely plastic, the body is mostly die-cast. The stomach is also plastic and features a fun gimmick. Here is how it looks normally.M 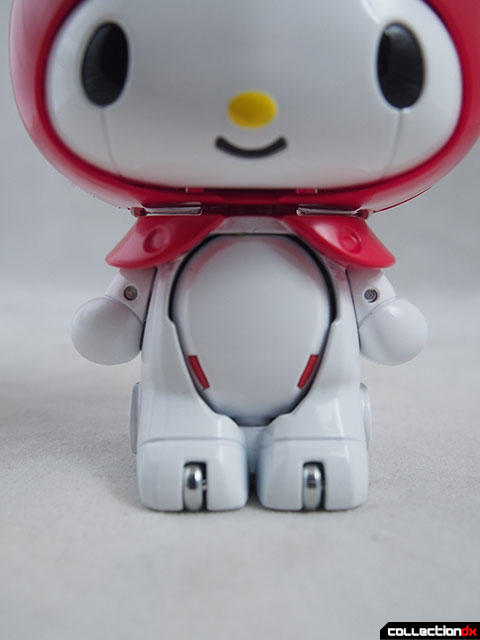 However, the tail is actually a knob that when turned, reveals a clear plastic cockpit for a mini My Melody to sit in!! 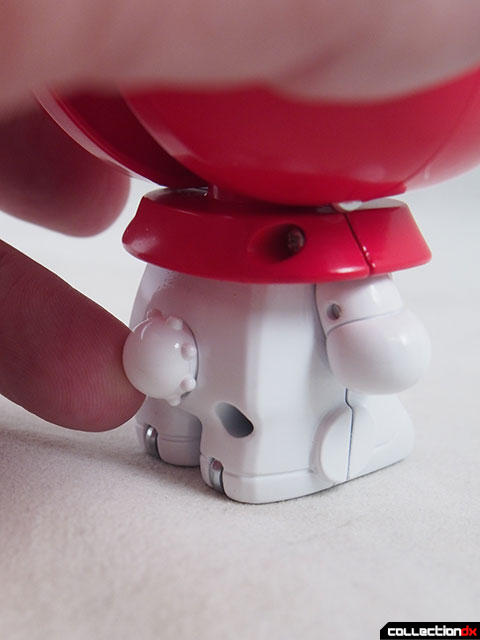 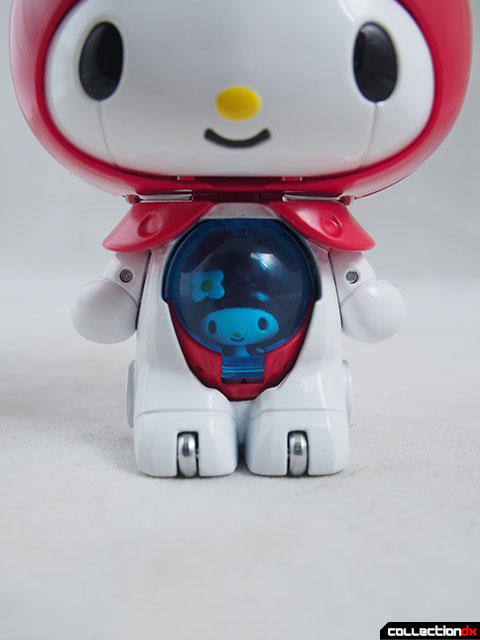 This little figure is actually removable and can be displayed separately. It's difficult to open the cockpit window without a little help but fortunately that help is included in the form of a small tool that actually doubles as a stand for the little My Melody on the included display base, which spells out "chogokin" in hirogana rather than the more traditional kanji.. 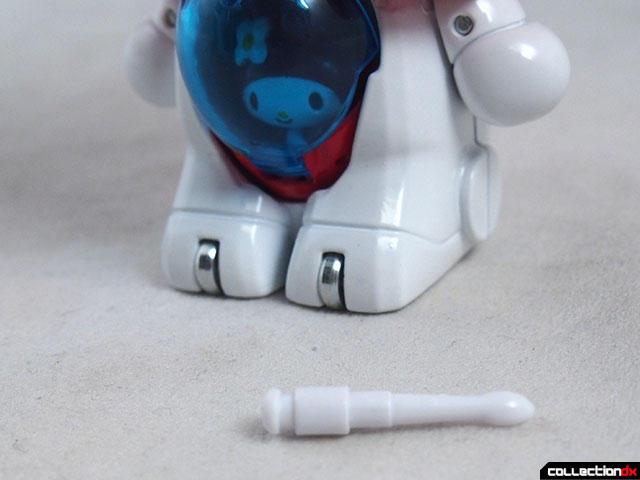 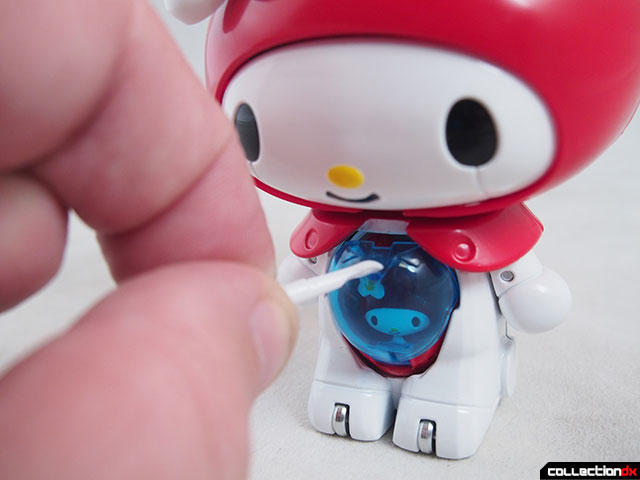 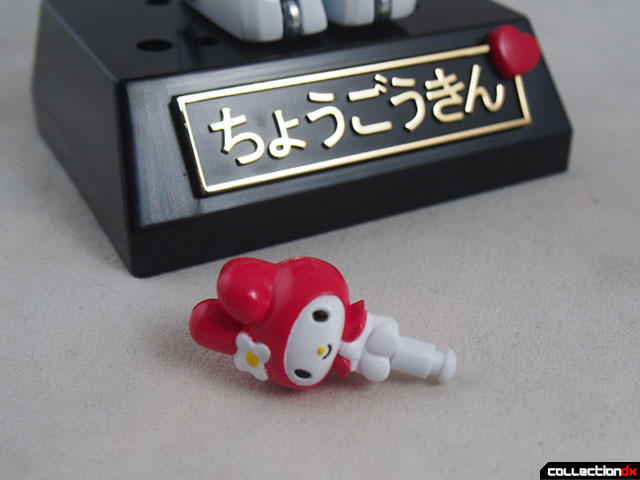 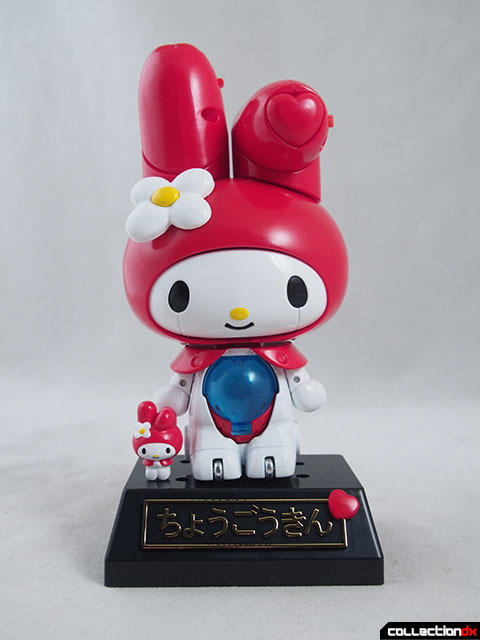 Besides the ears moving, both arms can rotate and the head can turn. 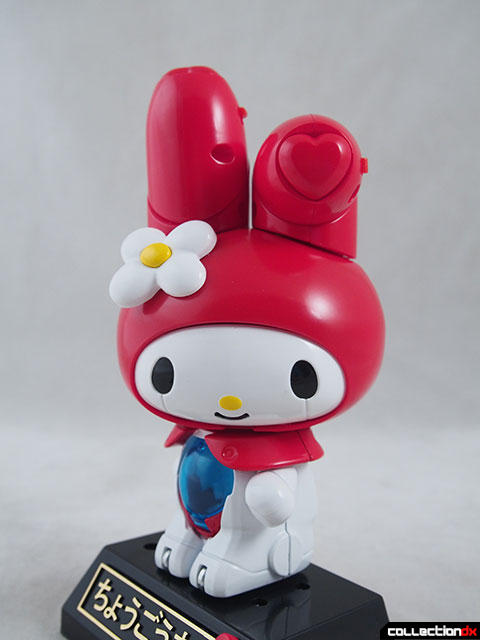 Now, My Melody can also 'transform" into Space Cruise Mode! Just twist the ears so that they are as far apart as can be, and point the top parts back. Then when you tilt the head back, a visor comes down over her face and another cockpit rises from her head, with another pilot inside! This particular pilot is fixed in place, but still, you basically get three different versions of the character in one toy. Although personally, I kind of wonder why they went this route rather than having one of those pilots be her mouse friend Flat. I think that might have been a bit cooler. 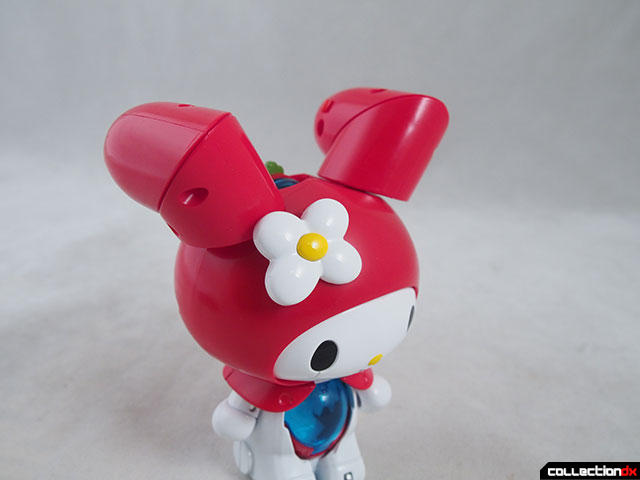 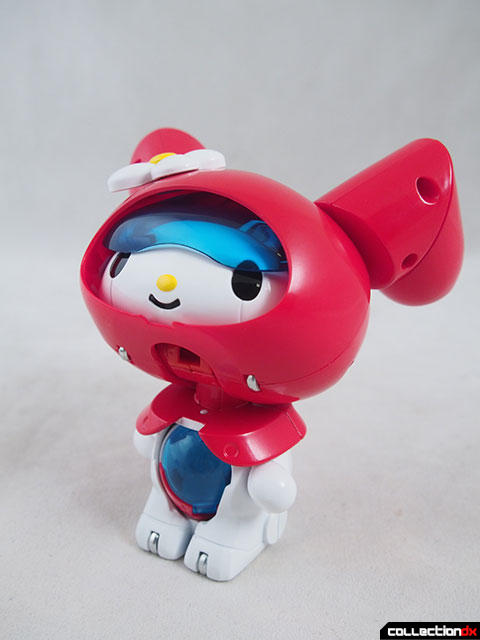 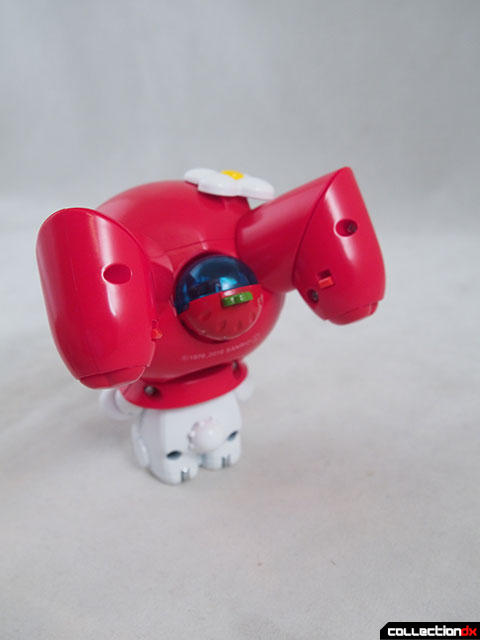 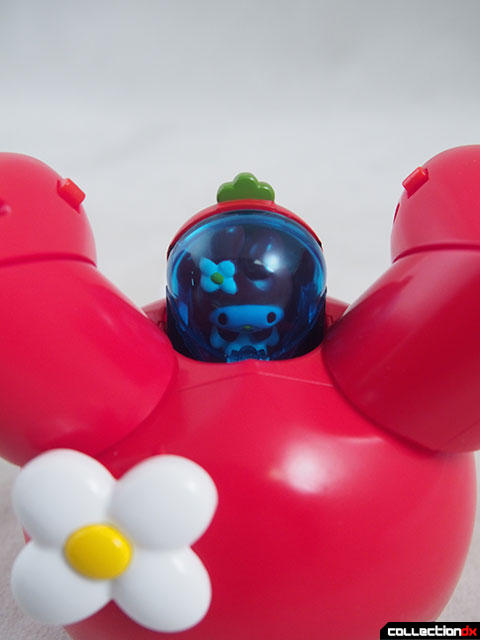 There are wheels on the toes and on the bottom of the head so that you can roll the toy while in this mode. 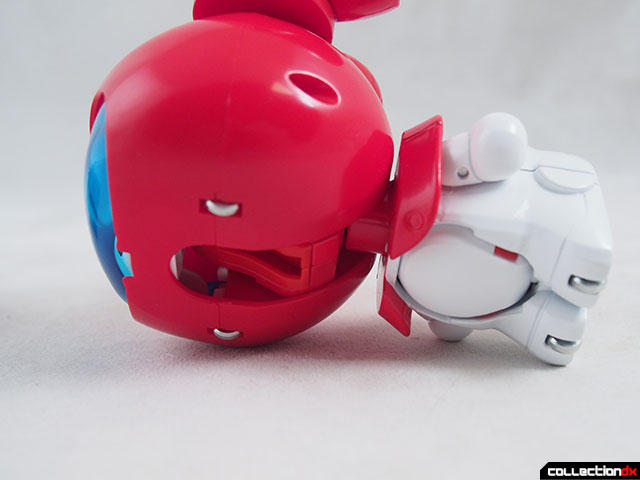 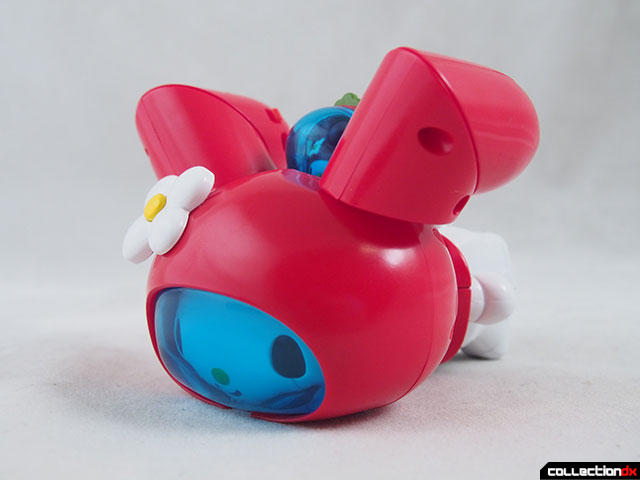 Two small black pieces are included so that you can display it in this mode on the base. Although it's a great feature, I suspect that most people will display her in her more traditional style. For instance, my girlfriend never even took these pieces out of the box. But you can store them, as well as the tool for the the little pilot, on the underside of the base. 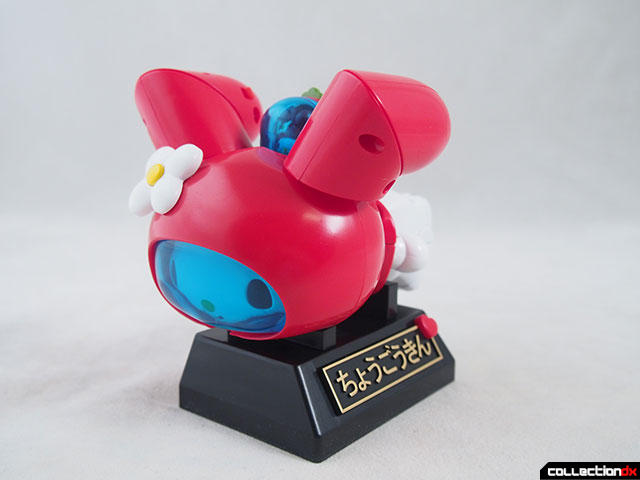 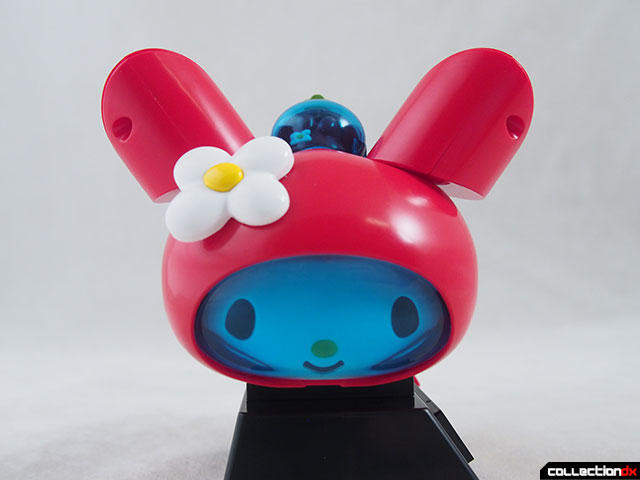 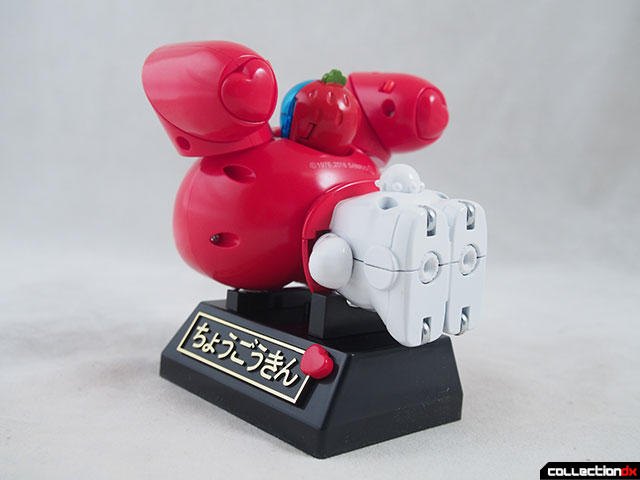 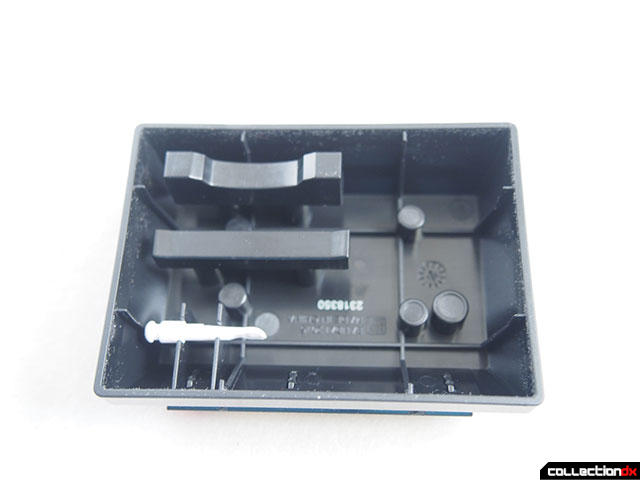 All of this is pretty great but for my money the best part is the shooting mechanism. The hearts on the tops of the ears? Yeah, they fire. This thing shoots hearts at you. How then could you not love it? 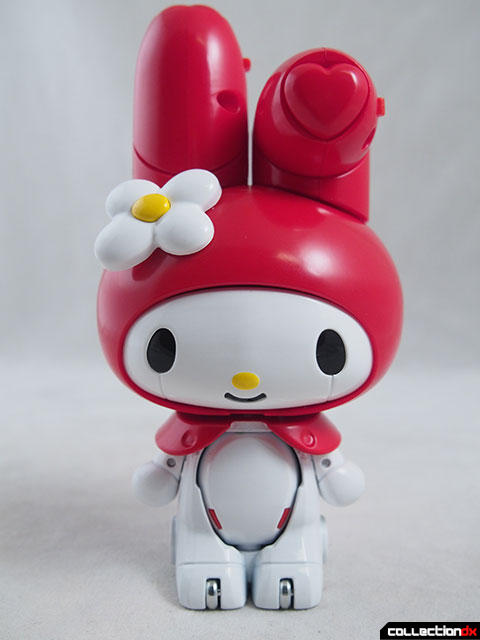 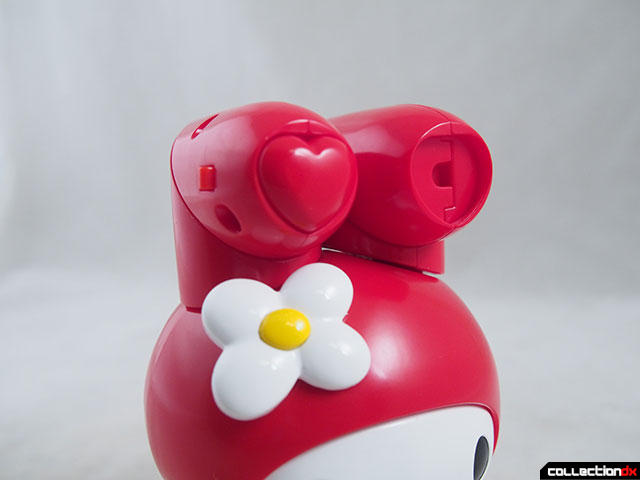 3 comments posted
I picked this up for my

I picked this up for my daughter's. Gotta say I love it, but it just isn't the gokin monster that Hello Kitty is.

Wow that's super sweet! Nice to see another review from you Dave!

I'd have really liked it if it was possible to engage the visor when the body is upright. The space cruise mode is pretty iffy for me.