Bandai is absolutely taking Hasbro to school with their Star Wars S.H. Figuarts. These things are just so amazing, and so much better than the Black Series. With that quality comes a price - the SHF are about 3X the retail of a Black Series release. So what justifies the extra cost? Read on.

S.H. Figuarts Luke appears courtesy of The ToySource! Get yours today!

This release depicts Luke in his outfit he wore on Tattoine. Apparently everyone in Star Wars wears the same outfit all the time.

The small box has a nice translucent window with some graphics painted over it. It's a little hard to see the figure but it gives it a classy appearance. 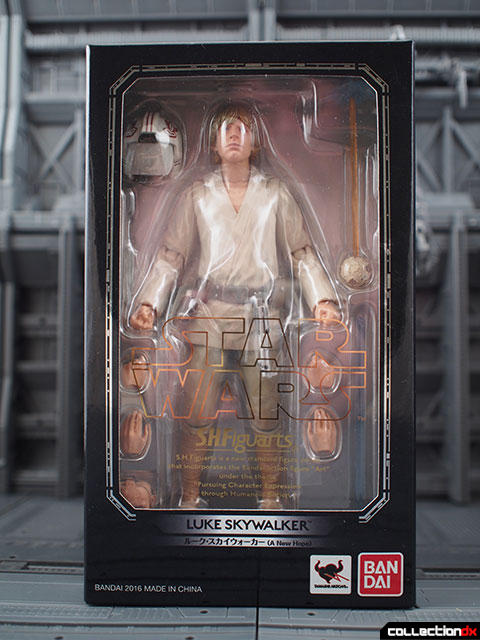 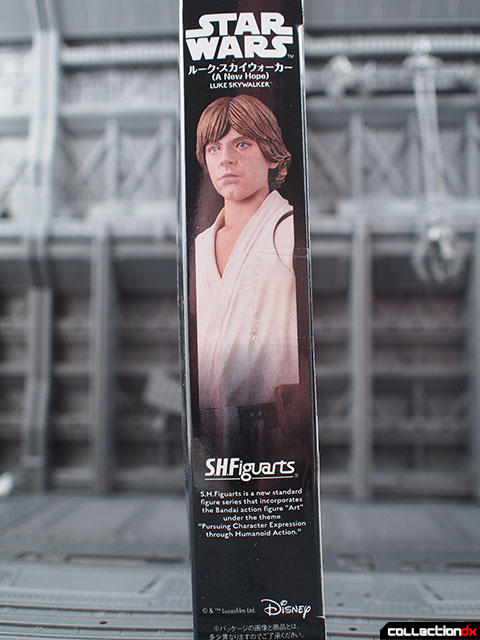 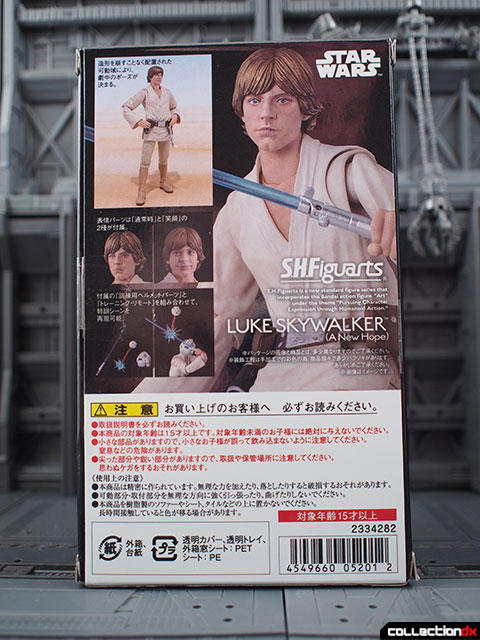 The likeness here is killer. The sculpt is beautiful. I have almost NO complaints about this figure. If anything it's that I would have liked a few more accessories. But I digress.

Just look at this farmboy. 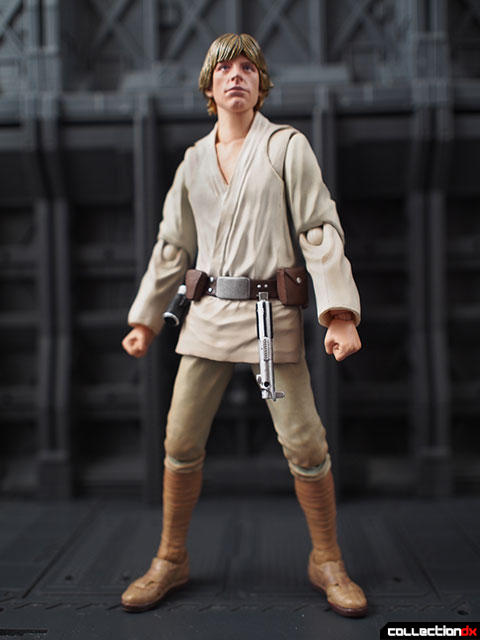 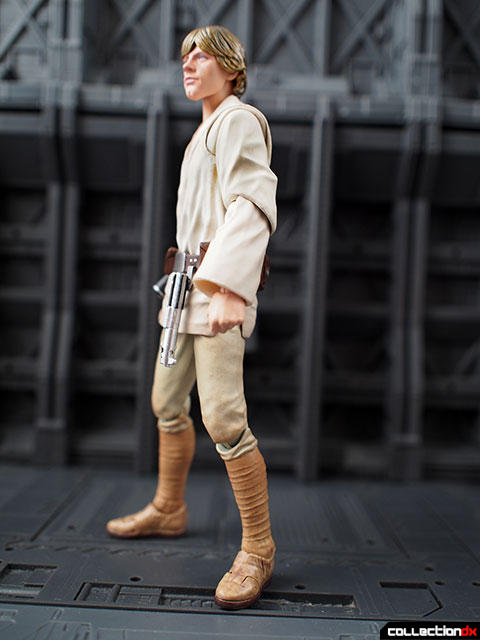 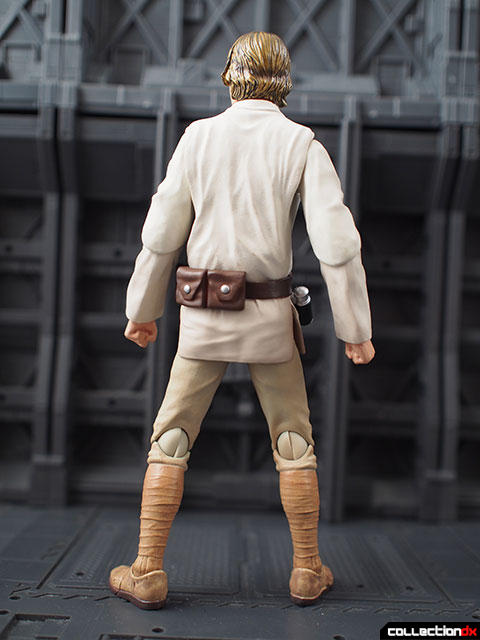 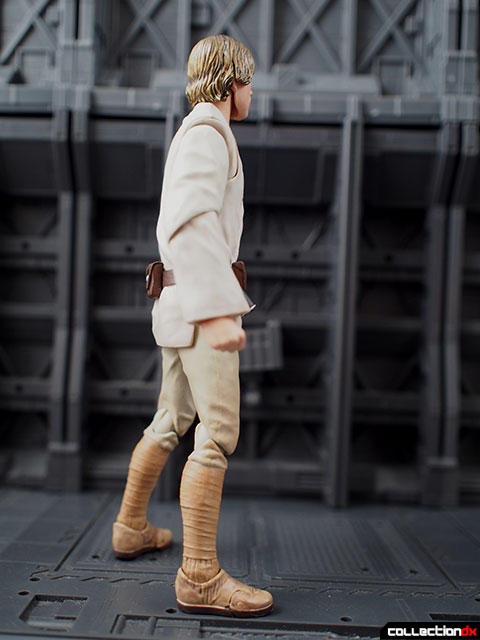 Articulation is fantastic, with subtle, smooth joints that look great in almost any pose. At this stage of Luke's life, his poses weren't dynamic. They are mostly whining, getting hit by sandpeople, crying because his aunt and uncle got barbecued etc... 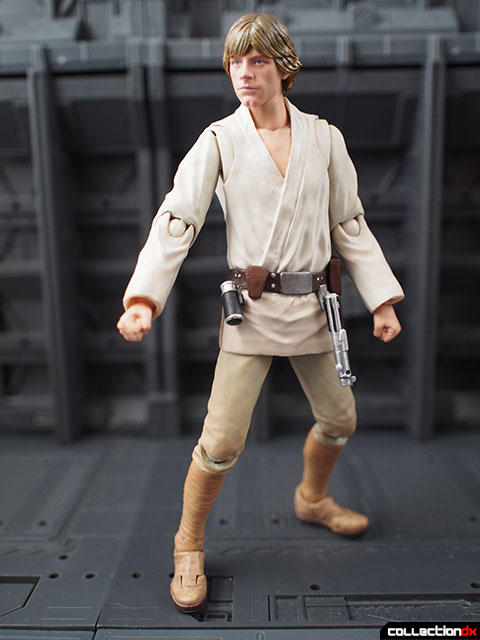 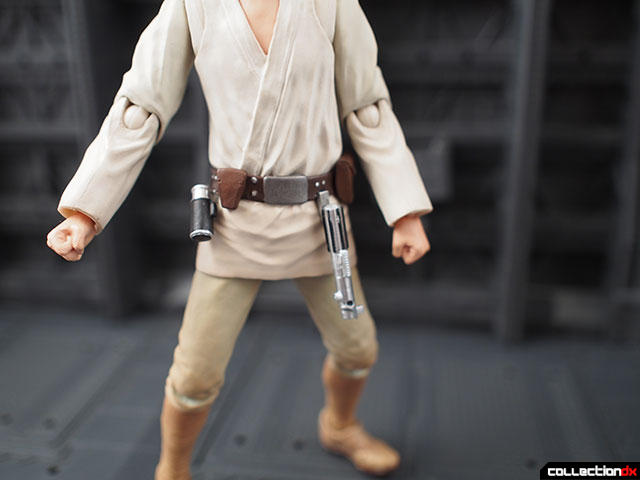 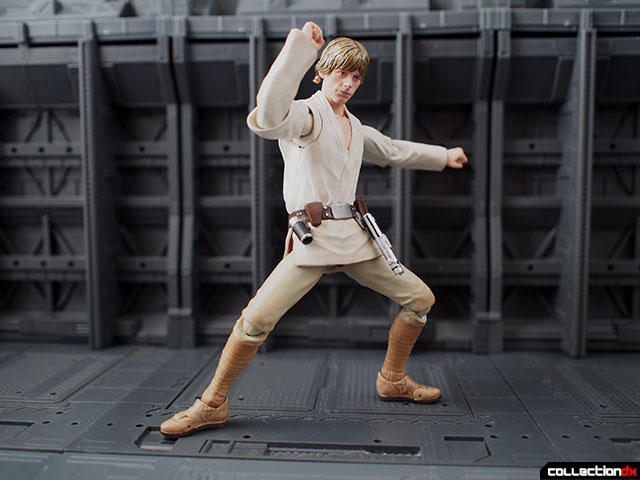 Four extra hands are included for a total of six hands. Closed, open and Lightsaber holding hands. Some hands plug straight in, others go in at an angle, so be aware of the direction of the holes in the hands before pushing them in. A small detail that I appreciated was that inside the lower sleeves is a distinct movable arm section. 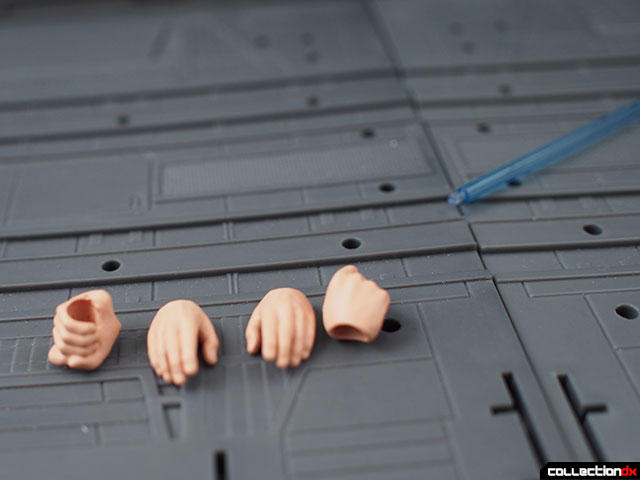 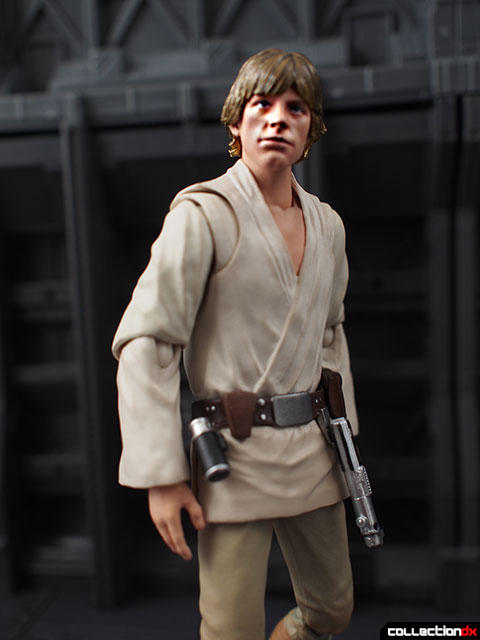 Luke also includes 2 variant heads. One of the faces is Luke smiling. It's a little goofy but that was a part of his character before he met old Ben Kenobi. To replace the face you split the hair down the middle, then separate the hair from the faceplate. Add the new face in the same way you took it out. 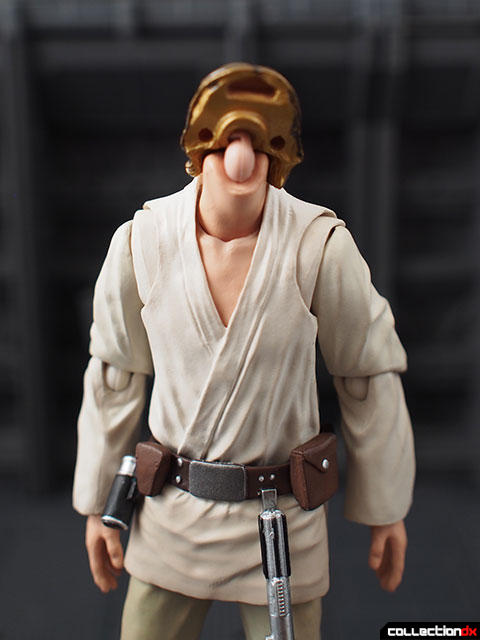 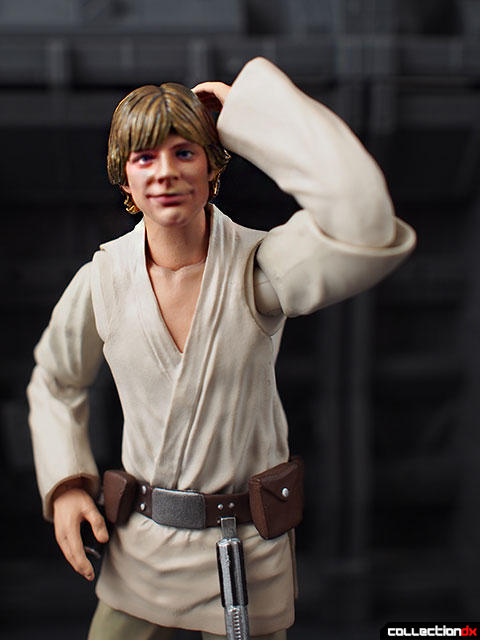 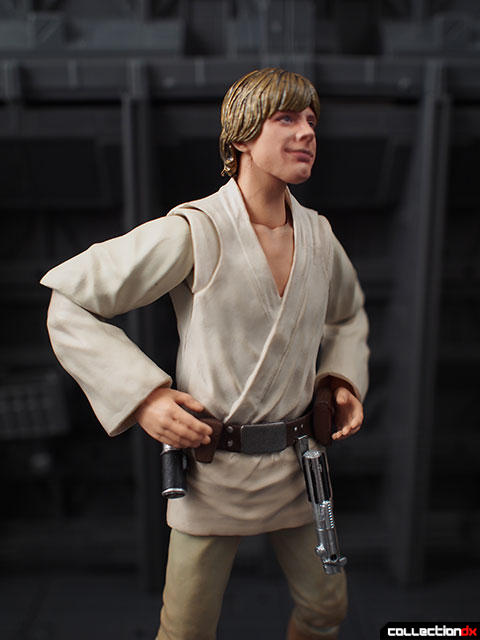 Luke's lightsaber plugs into his belt via a peg, and easily fits in his hands. 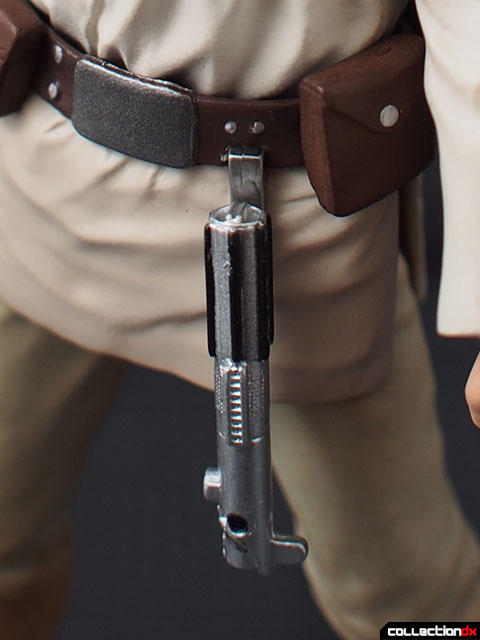 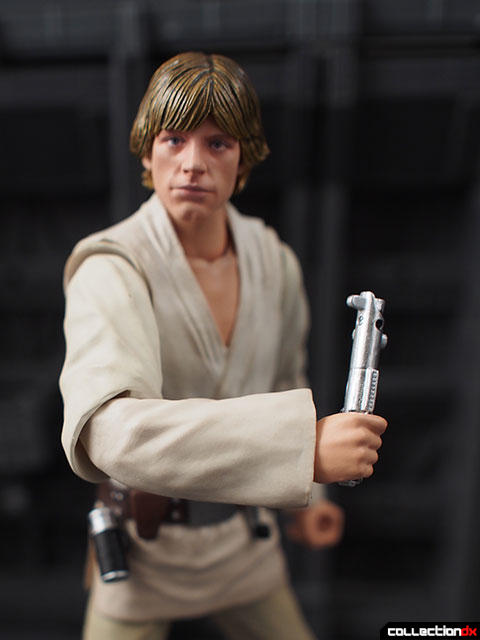 The blade is removable, so you can display with or without. 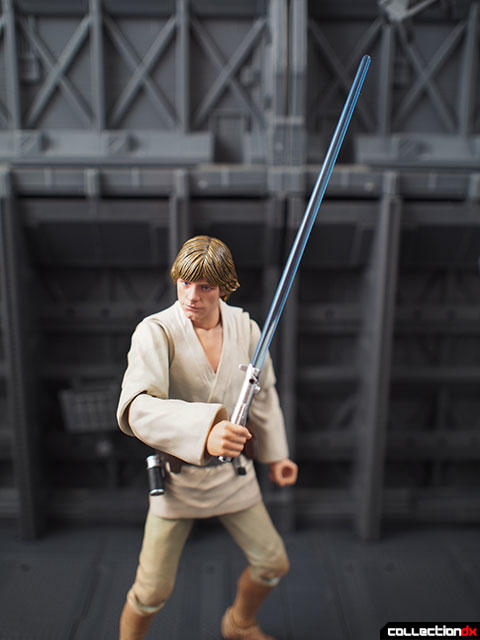 He looks majestic with his saber, even though he does not know what to do with it. 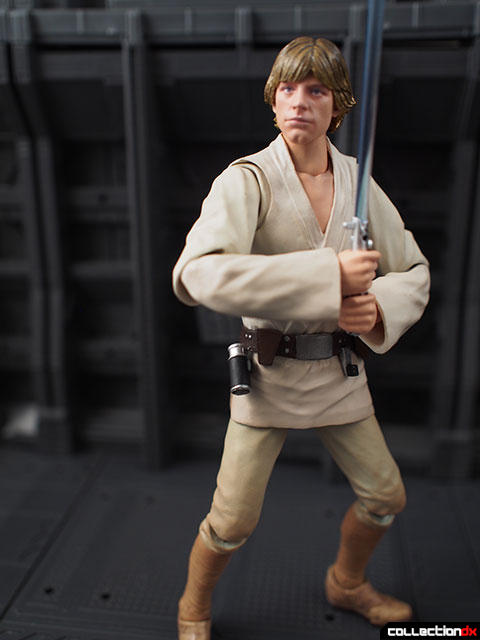 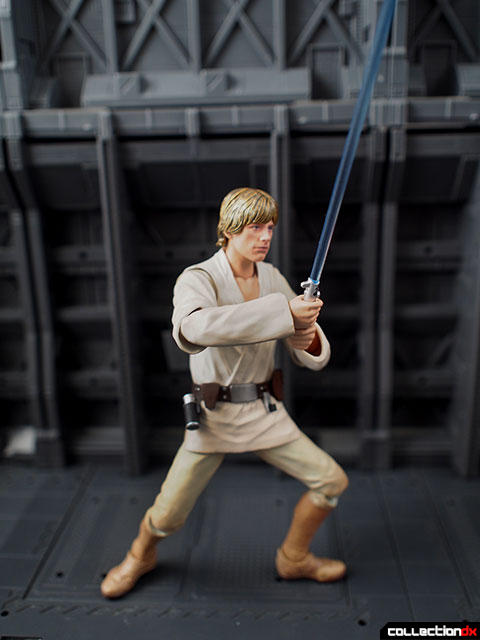 Which brings us to his other head - the helmet with the blast shield down. Unlike the variant face, this is an all new head piece that can use either of the variant face plates. The detail on the helmet is great. I wonder who this belonged to before they found it on the falcon? 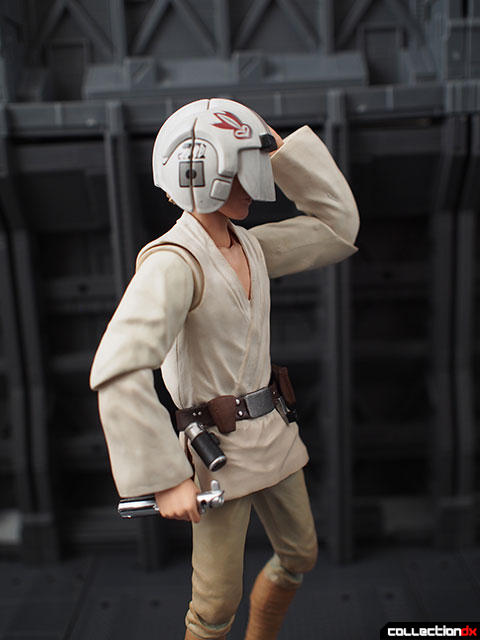 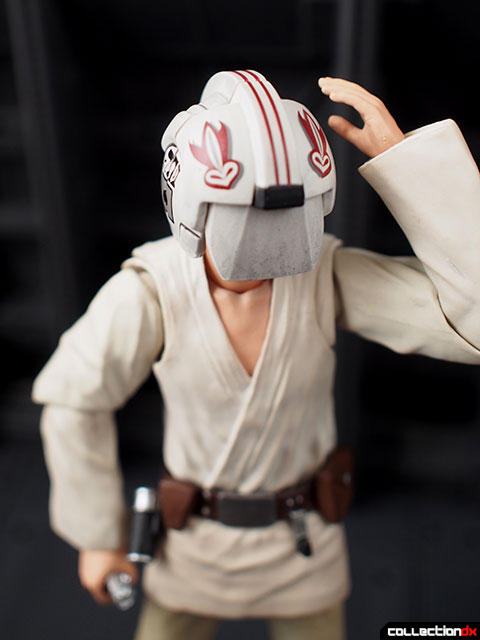 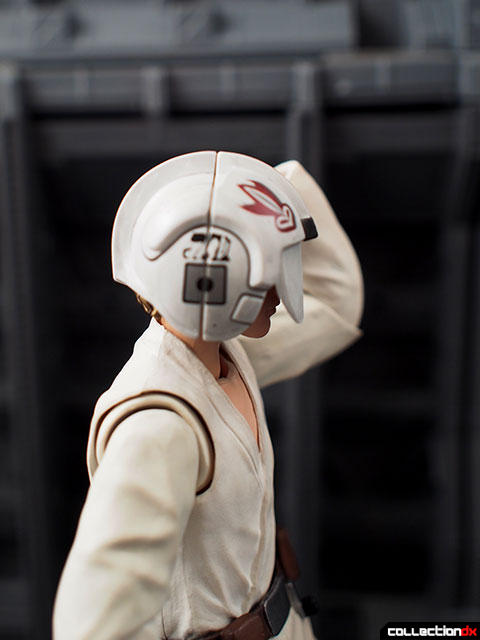 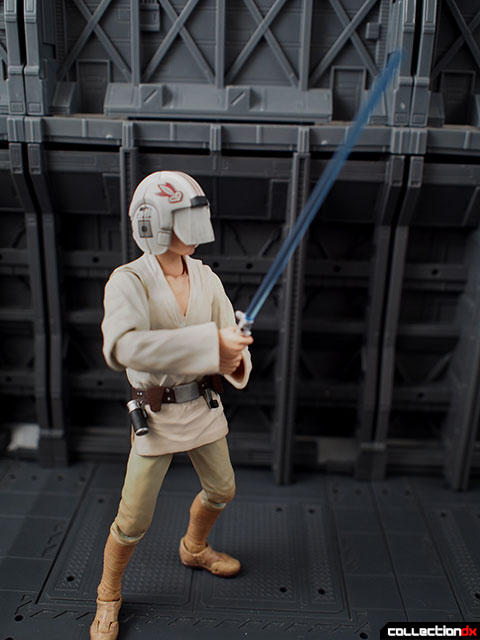 Maybe the coolest accessory is the training drone. It has a effect beam part that clips onto the lightsaber, giving the illusion of floating in air. It also has a hole in it should you choose to support it with a Tamashii stand. 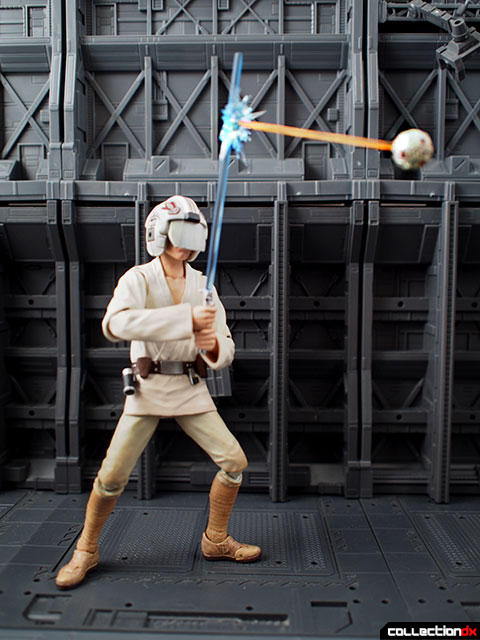 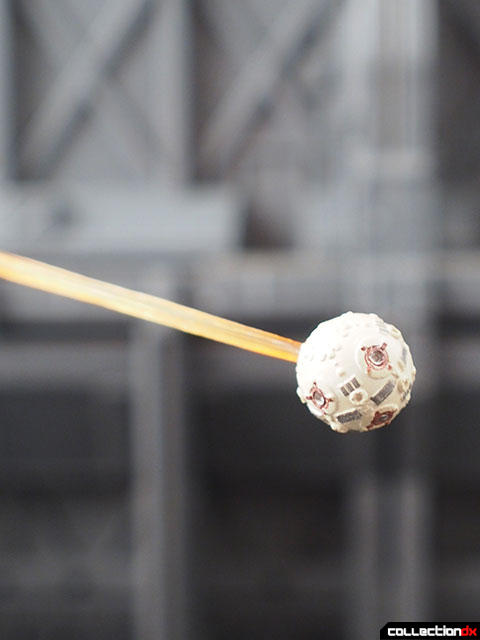 I mentioned earlier about the lack of accessories. While this has plenty, there are some missed opportunities. Around the same time in the movie he also had a hat, poncho and googles, macrobinoculars, and a rifle. I would have paid a little more to have the ultimate version of the character.

Get your S.H. Figuarts from The ToySource today!