First you draw a circle,
Then you dot the eyes.
Add a great big smile
And presto, it's Kirby!

The little pink blob from Dreamland is easily one of the most iconic characters in video games. Kirby has delighted both children and adults with for over two decades with a dizzying number of games. He is an incredibly adaptable character, able to star in titles ranging from platformers to puzzle games, and even pinball! Although Kirby's simple design is a tricky prospect for an action figure, GoodSmile seems up to the challenge with their release of Nendoroid Kirby! 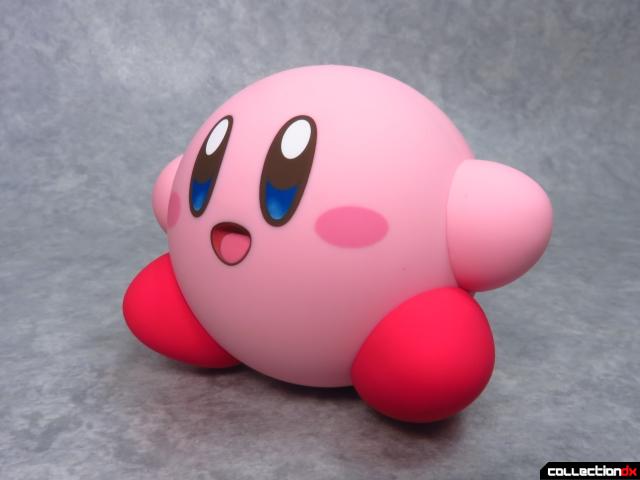 The hero of Popstar is a happy little ball who features a rubberized coating to make both look and feel soft. Kirby has a bit of heft to him, as the innards of his spherical body are lined with metal. He is a little under two and a half inches in diameter, which puts him well within typical Nendoroid size. 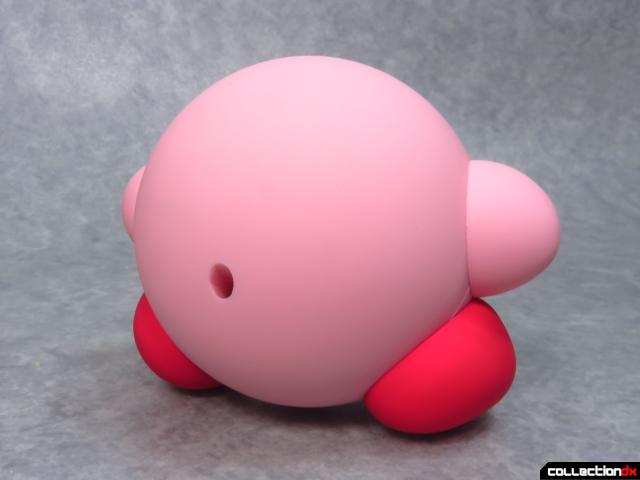 While Kirby is not really made to stand on his own, some careful positioning of his limbs can let you fake it if you wish to forgo using the display stand. The main problem is that his feet are rounded off in a way that trades stability for cuteness. 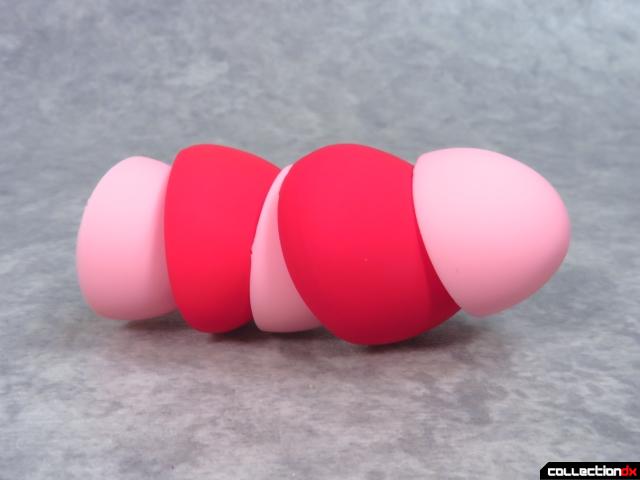 The aforementioned metal innards are the key to Kirby's articulation. He comes with five magnetic limbs that can be affixed to almost any place on his body. You get two feet parts, two arms(hands?), and an ambidextrous limb for holding his accessories. This technique was used previously on Takara's "Magnet Kirby Deluxe" figures from back in 2002. 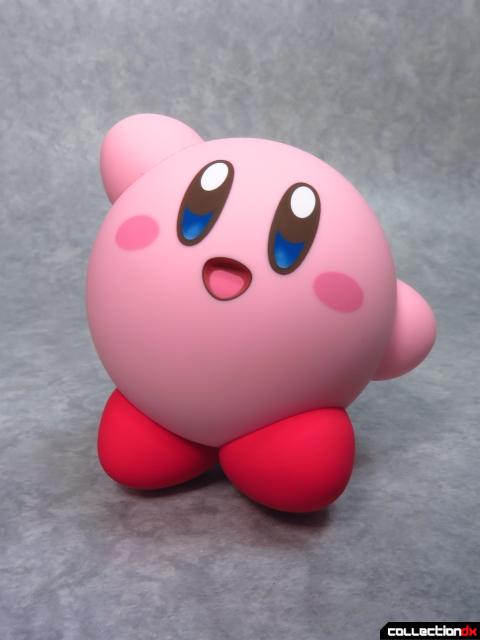 While messing around with the figure, I found that it's quite easy to employ the unused arm as a stabilizing tail so Kirby can pose without needing his display stand. While I wish GoodSmile had realize this trick themselves and included something like a clear magnetic "leg" to accomplish the same thing, using the extra arm part is hardly noticeable from most viewing angles. 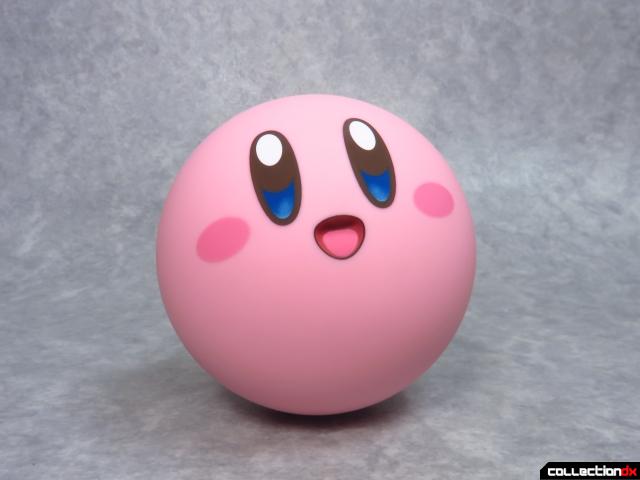 Without his limbs, Kirby is ready for a day at the Dream Course. 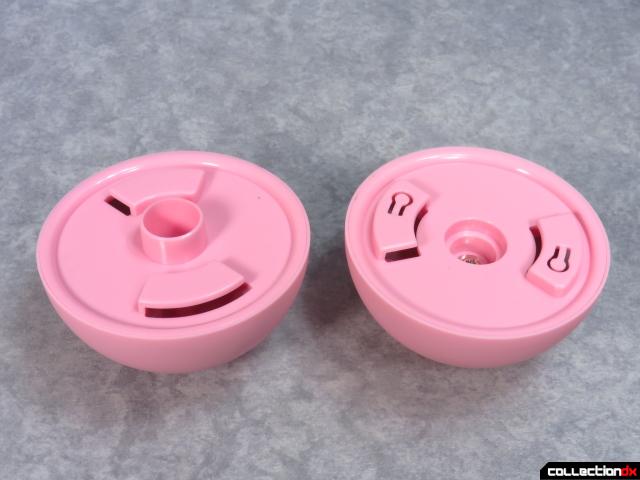 And like most Nendoroids, Kirby comes with multiple expressions. To change his face plates, simply rotate the two halves of his body counterclockwise to separate the parts. The toy is designed in such a way that you can only connect a face plate to the back plate. 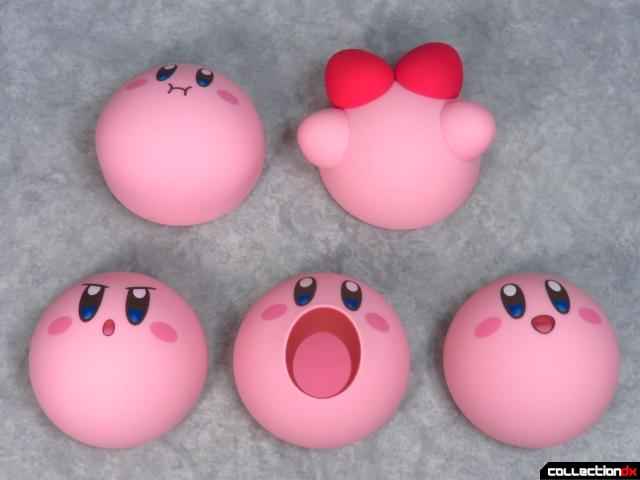 While I greatly appreciate having all these expressions to choose from, it looks like you could have made at least one more Kirby out of all of these parts. Granted, one would have a face on its back, but still... 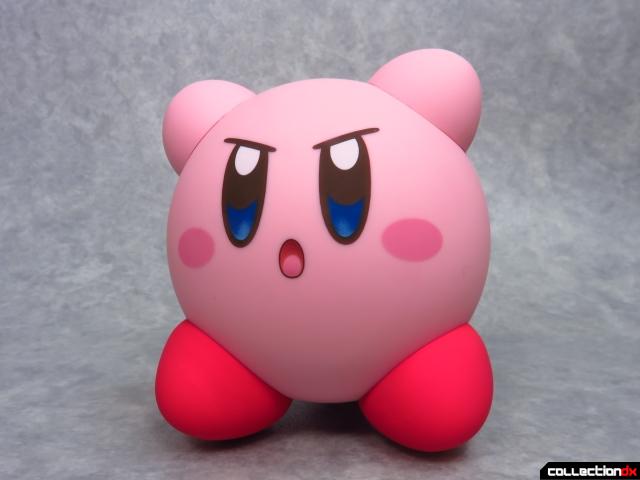 First up after Kirby's default happy face is this angry expression, which represents when he is attacking enemies, or appearing on box art for the North American versions of his games. 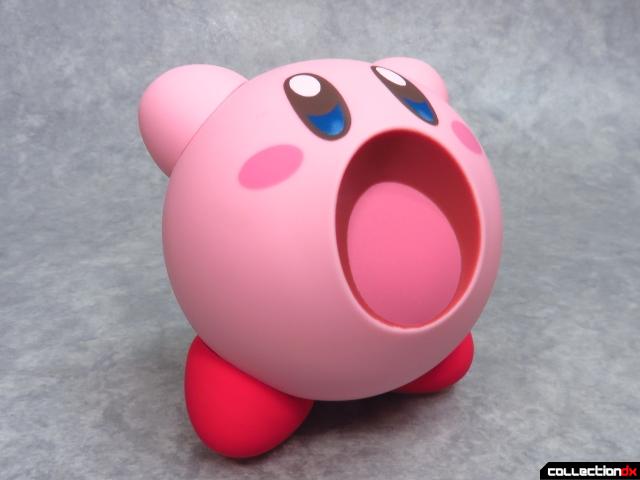 Next up is the inhaling face. This is arguably the most important thing for a Kirby toy, as it is the foundation of his powers in almost all of his games. 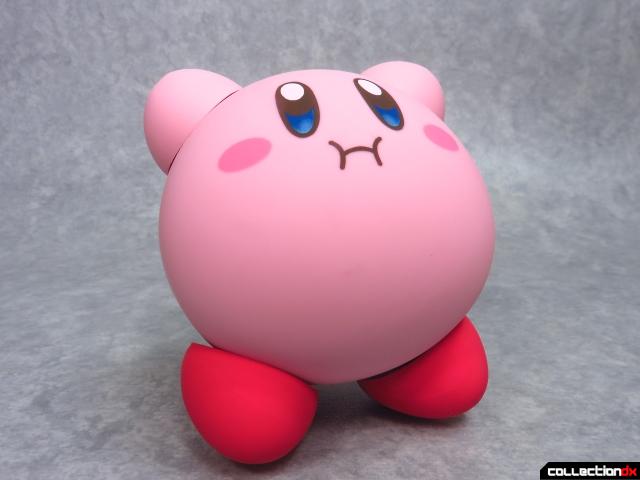 And you can't have our hero inhale something without the ability to store it, so the last face is Kirby with cheeks puffed out after gobbling up an enemy or item. Since this face doesn't have the same hemisphere shape as the rest, Kirby's limbs don't quite conform to the surface of this face part. However, it is still almost completely magnetic, save for the area near his face. 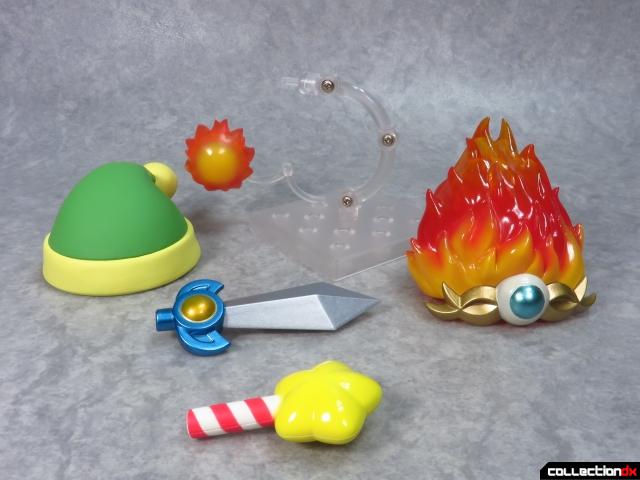 The rest of Kirby's accessories are a fun grab bag of items and powers from the games, as well as the usual Nendoroid stand. 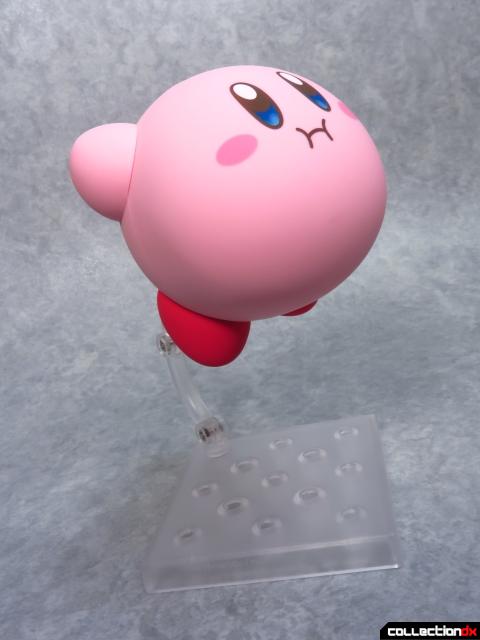 The stand plugs into Kirby's posterior, and is sturdy enough for flying poses. Hold up on the D-pad to fly! 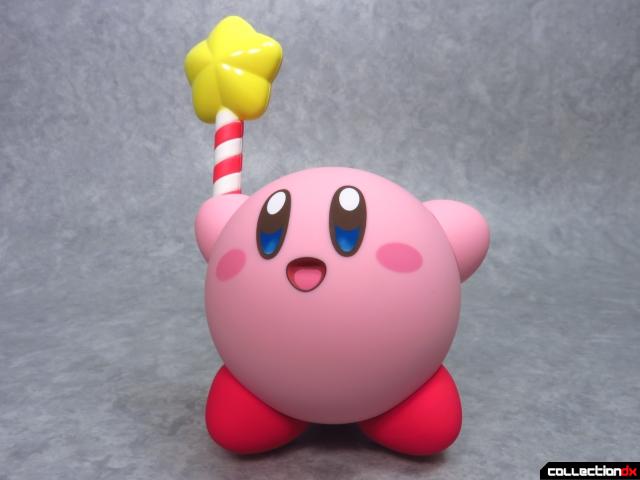 For handheld accessories, Kirby comes with the famous Star Rod! This magical wand has been a key item in dozens of games and is useful for defeating scary nightmares. 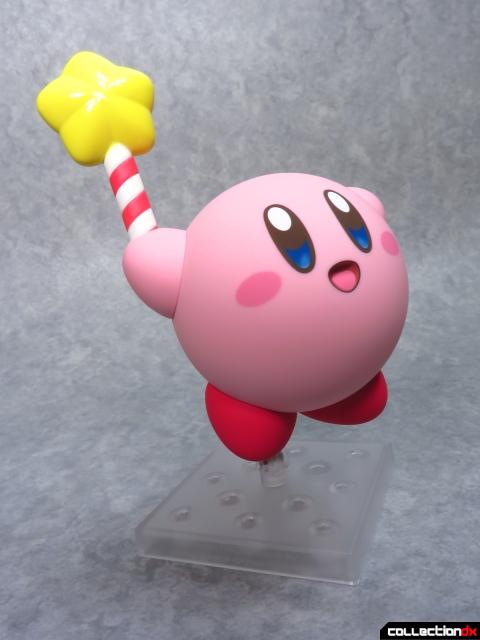 The Star Rod plugs into the extra arm, which features a circular indent with a peg on it. The connection feels nice and sturdy on my figure, so I can easily recreate the climactic final battle from Kirby's Adventure. Fly, Kirby! Defeat the Nightmare! 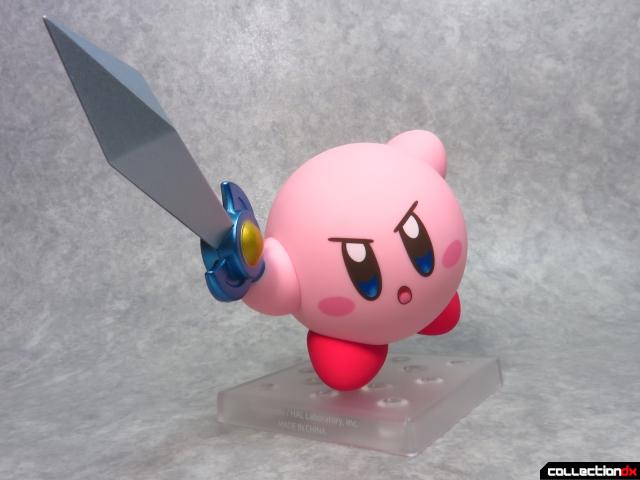 The sword is another power that hails from Kirby's first NES game and functions the same as the Star Rod. Coupled with the angry expression, this cute lil' guy can look downright fierce. 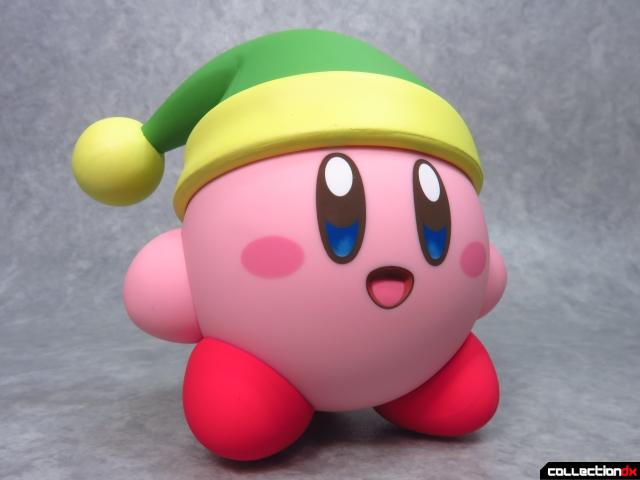 Starting with the 16-bit era, Kirby would don a fancy hat when he obtained an ability. Copying a knight gave our hero an elf cap that is not unlike the kind worn by a certain Hylian adventurer. Like Kirby's limbs, the cap has a magnet to help stay on his body. 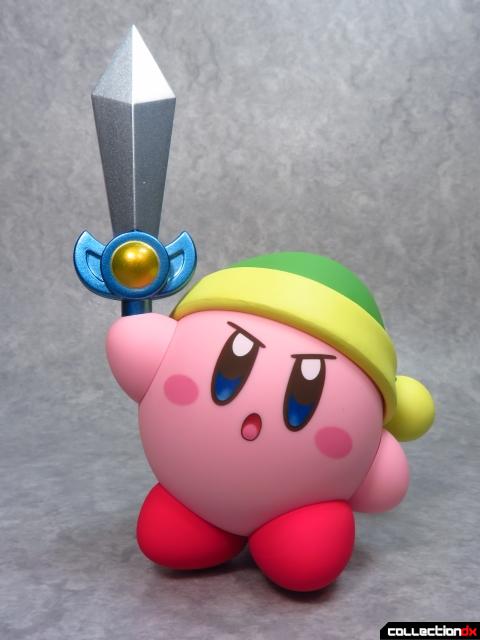 "By the power of Popstar! I HAVE THE POWER!!"

While the hat does decrease the amount of space you have to stick Kirby's limbs, it's still possible to pull off some cool poses with the full sword getup. 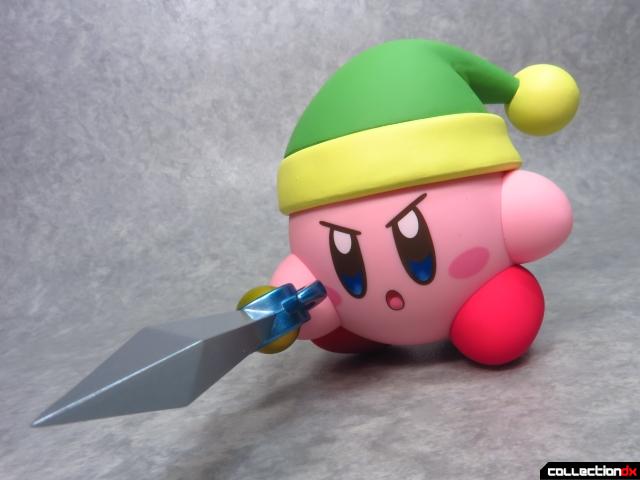 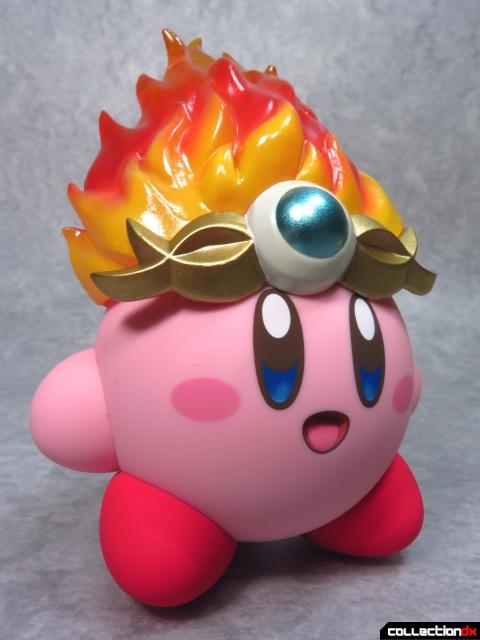 Kirby's other hat is the fire ability's flaming headdress. It is cast in clear red PVC plastic and given a hefty amount of paint to make it look like a burning flame. The fit on this accessory seems a bit more finicky than the sword cap, so it may take a little extra work to keep the front crest off of Kirby's eyes. 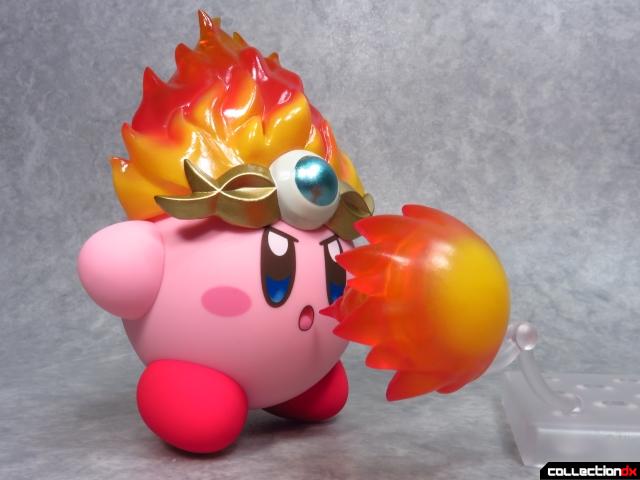 Giving some firepower to this ability is a small fireball accessory. It has its own adjustable armature that plugs into the base of the display stand. 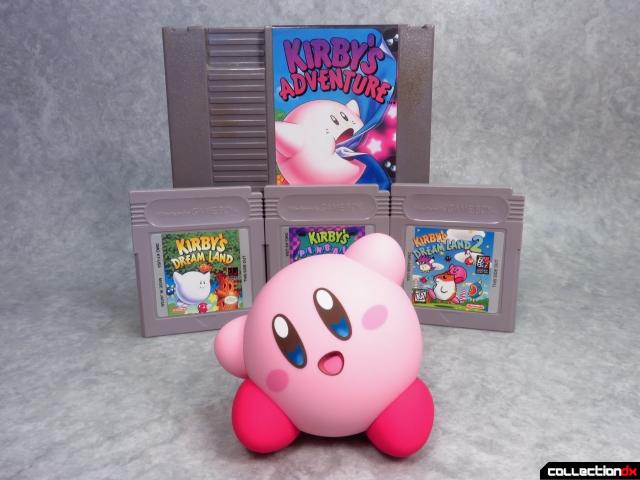 Overall, Nendoroid Kirby is pretty much everything I wanted out of a little pink ball action figure. While a few more accessories would have been appreciated, what is included is still a good selection of classic Kirby abilities. He is easily one of the most playable Nendoroids in recent memory, and I dare say, Kirby may be the cutest of them all!