\In the anime, Choujuu Kishi Dancouga, the Eagle Fighter has the distinction of being the first Cyber Beast Force unit to burst onto the scene with a loud, "YATTE YARUZE!" In fact, the show takes a rather "slow burn" approach to introducing the rest of the CBF, you could argue that audiences would get just as attached to Dancouga's individual components as they would the combined form itself. Unfortunately, the fact that the Eagle Fighter forms just the head of Dancouga means it is always forced to be the smallest and least intricate of any given toy version of the Cyber Beast Team. Sen-Ti-Nel, in cooperation with Union Creative and Studio Half-Eye, decided to rectify this by releasing a fully-featured and highly detailed Eagle Fighter as a stand-alone figure. 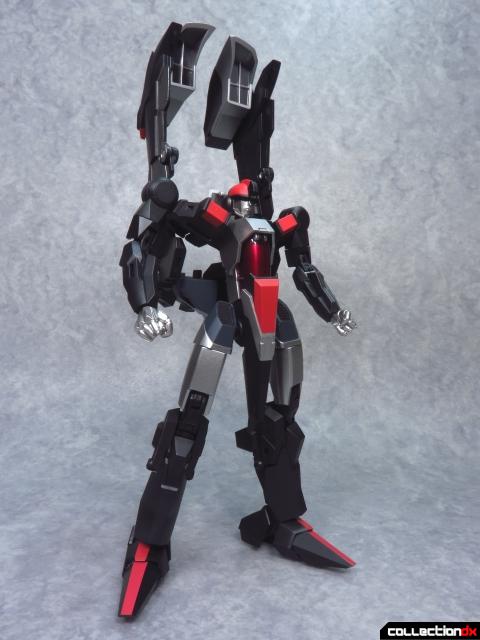 Studio Half-Eye modeled their Eagle Fighter after the highly stylized art and animation from industry pro, Masami Obari, rather than the stock character model. As such, this makes the for a very dynamic looking figure, even in a basic standing pose. 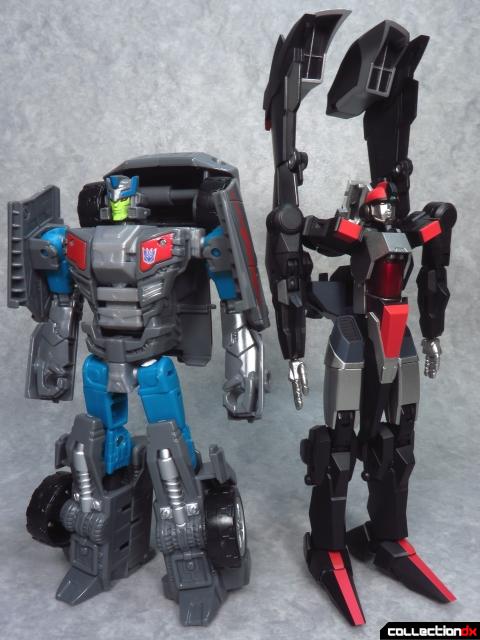 I must admit, when I unboxed the MetamorForce Eagle Fighter, I was taken aback by its size. With a head height of a little over five inches tall, it fits next to the average Deluxe-class Transformer (yet costs roughly eight times as much). All-plastic construction makes the toy feels fairly light for its size, which is similar to how a lot of max Factory figmas feel in the hand. 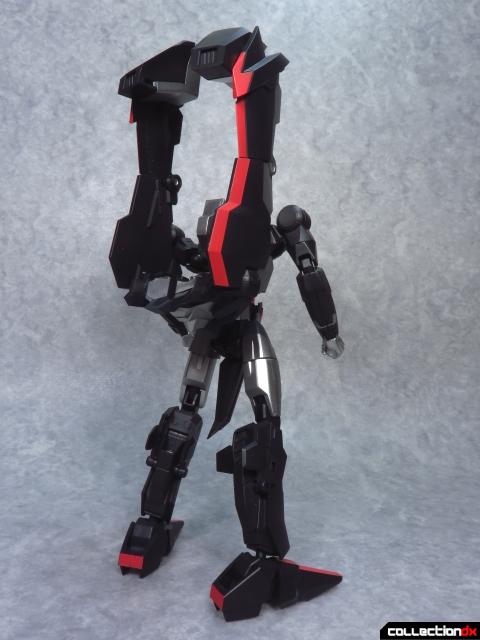 Stiff joints in the toy's hips and ankles allow it to stand tall in spite of the robot's sizable backpack. 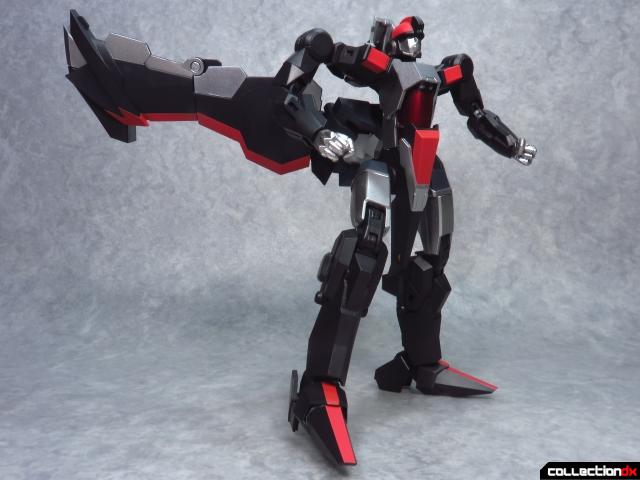 It can even remain upright when the Eagle Fighter has its wings out at their full span. Although, you may have to play around with its stance a bit for proper balance. 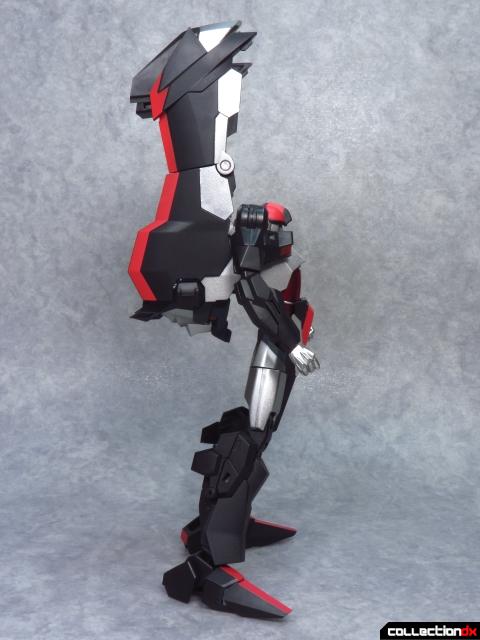 And true to Eagle Fighter's design, the wings are attached to a huge face you're supposed to kindly ignore when the figure is not Dancouga head mode. 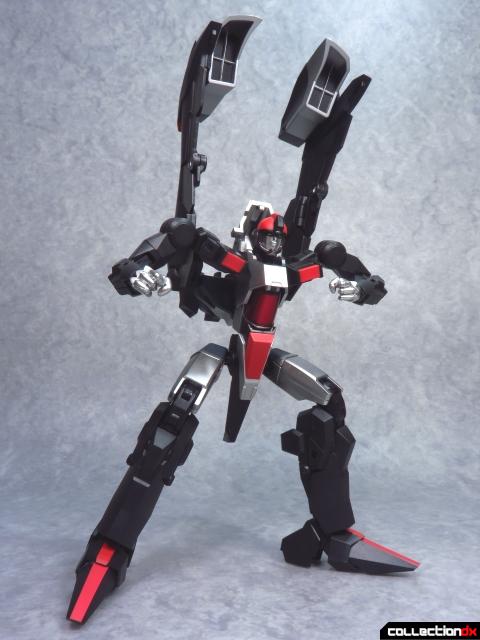 The MetamorForce figure is hands down the most articulated rendition of the Eagle Fighter to date. And while the competition for this title ain't exactly fierce, Sen-Ti-Nel and Studio Half-Eye put forth a strong effort to create an almost Robot Damashii level Eagle Fighter. Build wise, the toy feels fairly durable. Although, I would exercise caution around the finer points like the tip of the beast mode beak and the ends of the wings. 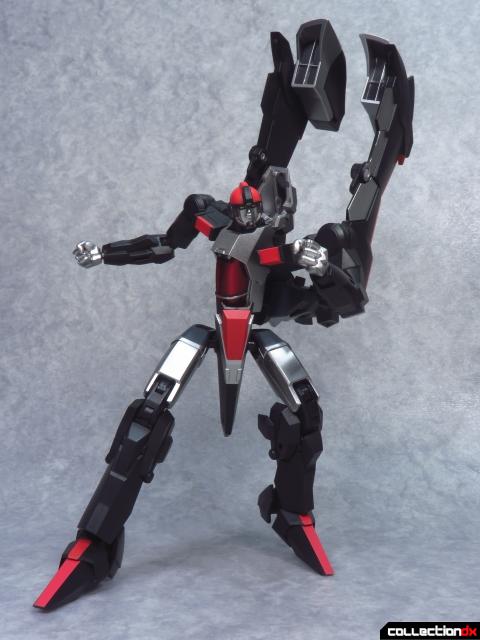 They even managed to sneak a waist swivel into the design. This is accessed by sliding the silver cockpit block section of the body upwards from the black beak/groin section of the figure. You get about a 45 degree twist in either direction. 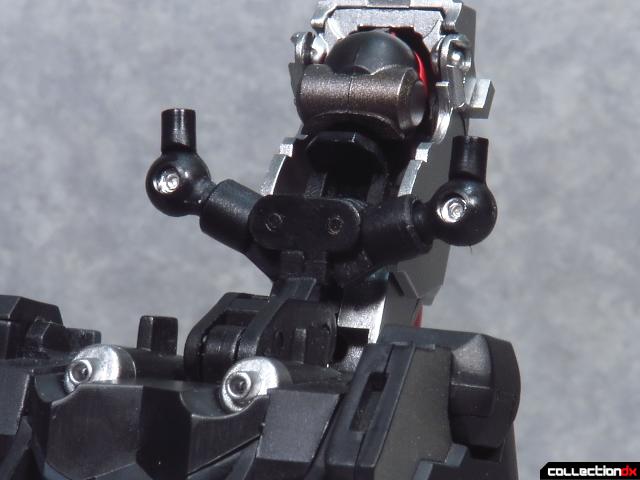 And while the figure has a respectable numbers of joints packed into its lithe frame, things tend to fall apart (quite literally) in the upper body region. Each shoulder block connects to a centrally-mounted assembly via these spherical universal joints, which have the unfortunately tendency to loose their grip at either end. Unless you take the time to tight the connections in this area, you may end up removing the arms, posing them, and then plugging everything back onto the toy each time you want to mess with the figure. While the arms go back on easily enough, this kind of design oversight is just plain annoying. Also note that for both beast and head mode, the metal pins in each joint need to be parallel to the main body (as seen in the picture). 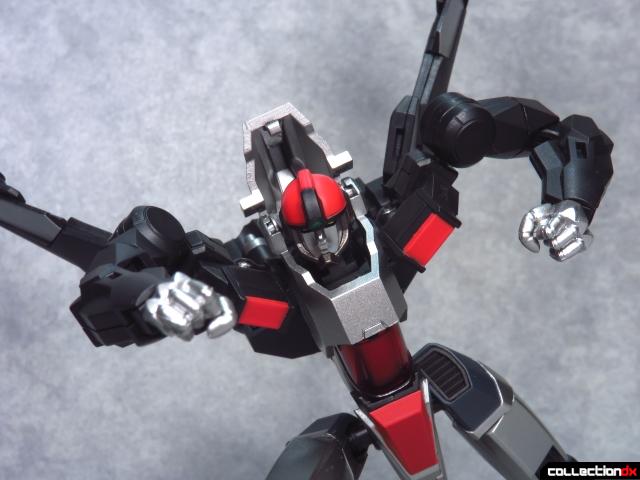 By default, the Eagle Fighter's distinctive three-fingered manipulators are balled tightly into fists. 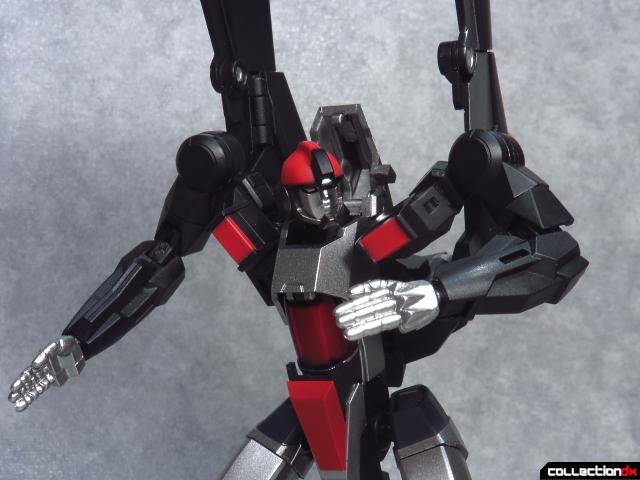 You also get a pair of "chopping" hands, which are primarily for use in beast mode. Ball-jointed wrists make swapping the different hand parts pretty straight-forward. 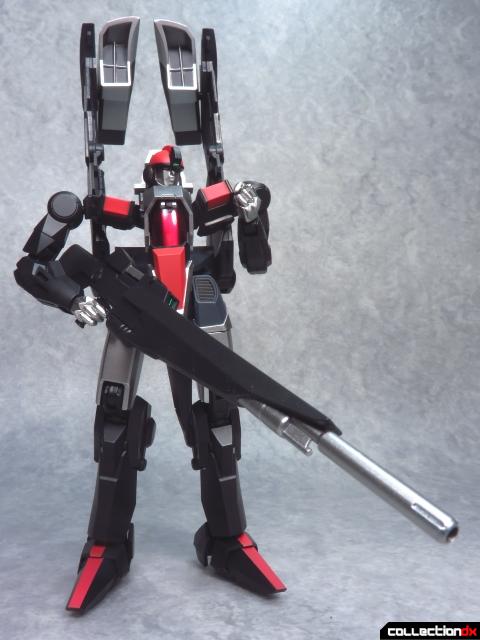 Also included is the Eagle Fighter's long-barreled beam gun, which is easily as long as the robot itself is tall. 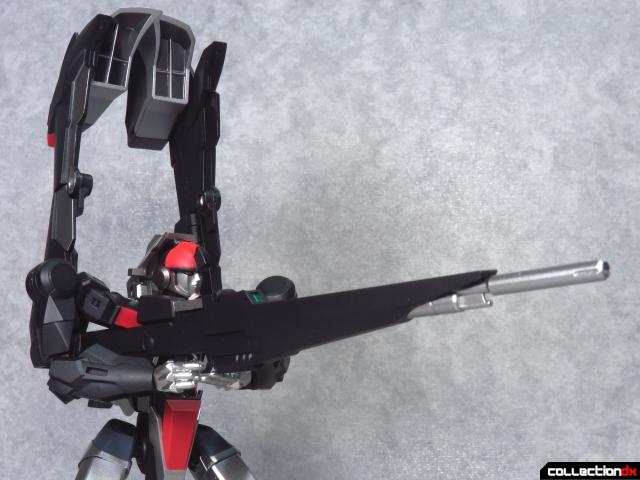 The handle of the gun is gripped by its own hand accessory. While the fist is not attached to the handle (merely threaded around), it feels like trying to remove it would end up damaging the hand part. 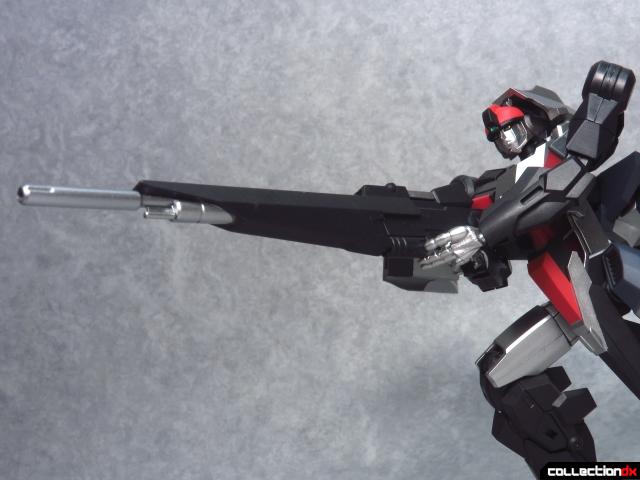 With some careful posing, the Eagle Fighter can readily wield the huge rifle with either one hand or two. 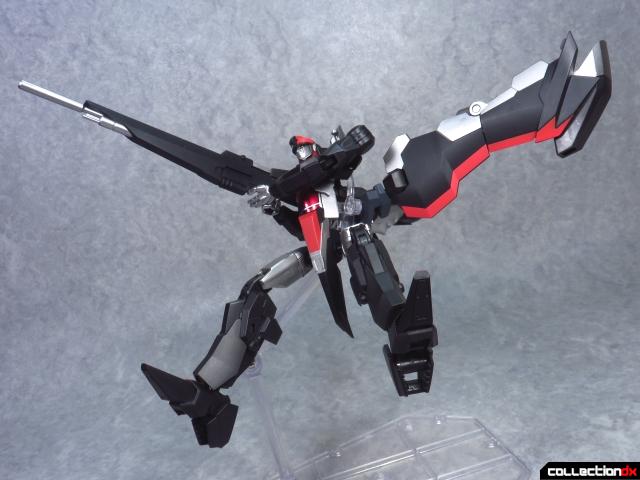 And while no display stand is provided, it's easy enough to wedge the usual gripping claw (like on a Tamashii Stage) between the Eagle Fighter's torso and the Dancouga face. 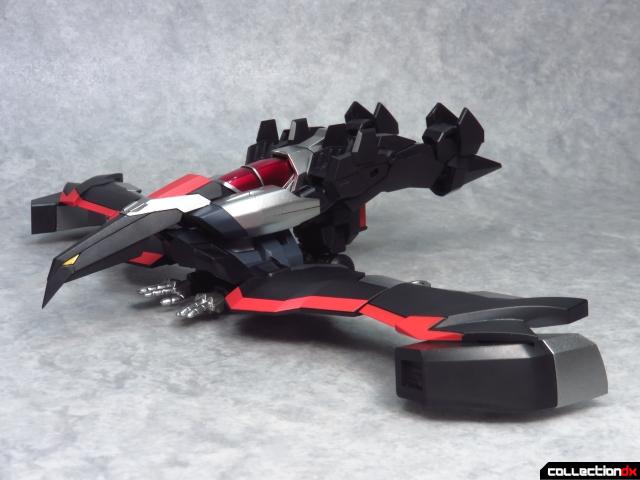 Converting the Eagle Fighter from Aggressive Humaroid Mode to Fighter mode is pretty straightforward. I found the only difficult thing is dealing with the terrible instruction manual, which uses straight photos of the toy in all its matte black and detailing obscuring glory. Learn to use adjust the contrast in Photoshop, fellas! 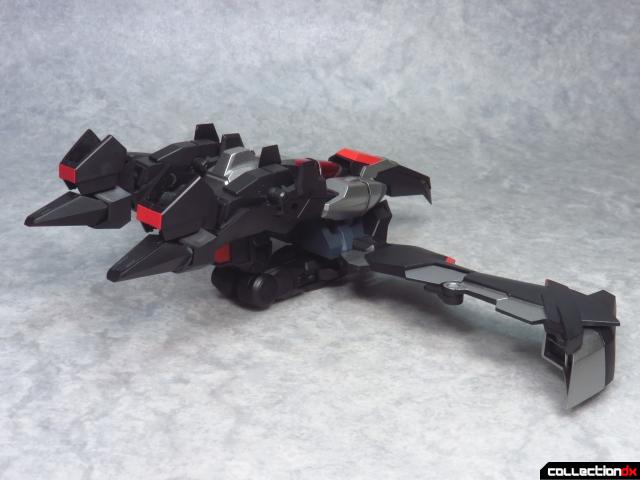 All the limbs tab neatly onto the body, creating a solid little bird bot. However, no landing gear is provided so all the figure can do in this mode is sit unevenly on the ground. 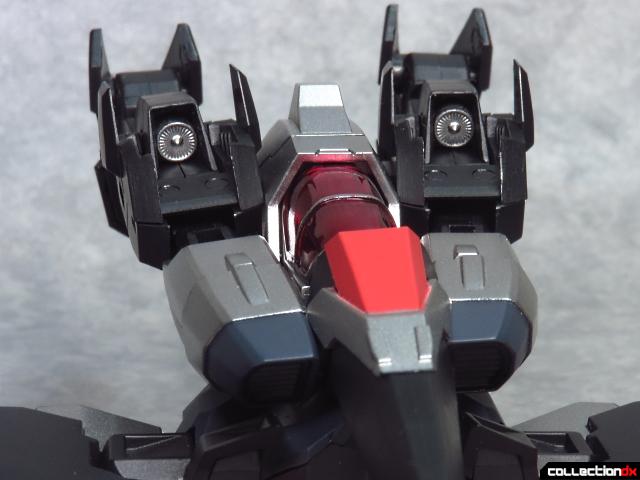 This toy embraces the Eagle Fighter's 80s aesthetic with little touches like intake fans on the engine blocks. The crimson canopy's subtle use of clear parts is able to suggest a cockpit interior, even though none exists on this figure. 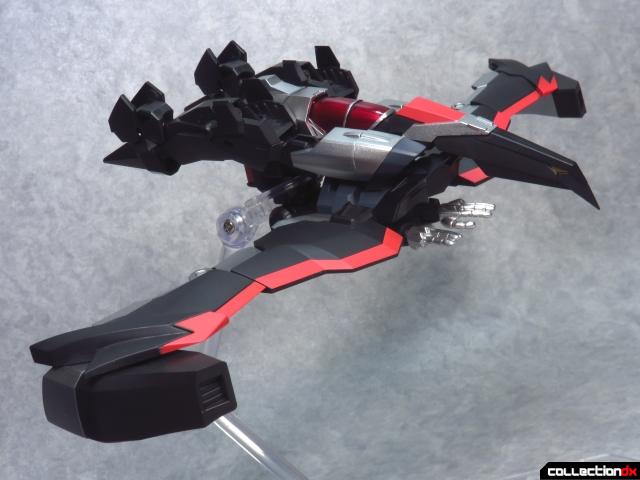 And again, while not stand or adapter piece is provided, it is possible to prop the Eagle Fighter up on a Tamashii Stage for flight poses. 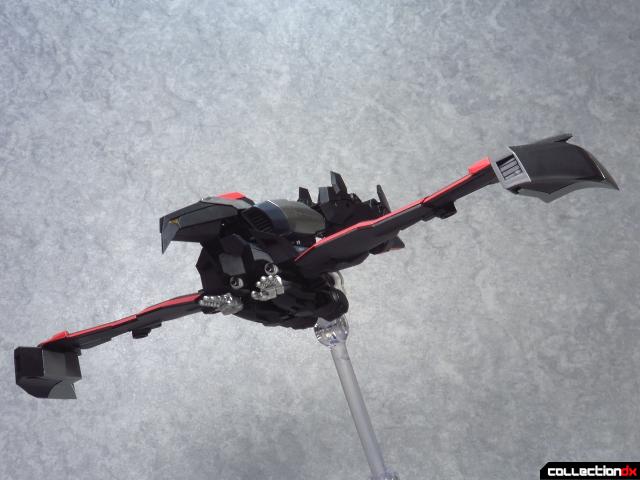 Just like in the show, the Eagle Fighter is armed with a pair of vulcan cannons and movable wing-mounted missile pods. 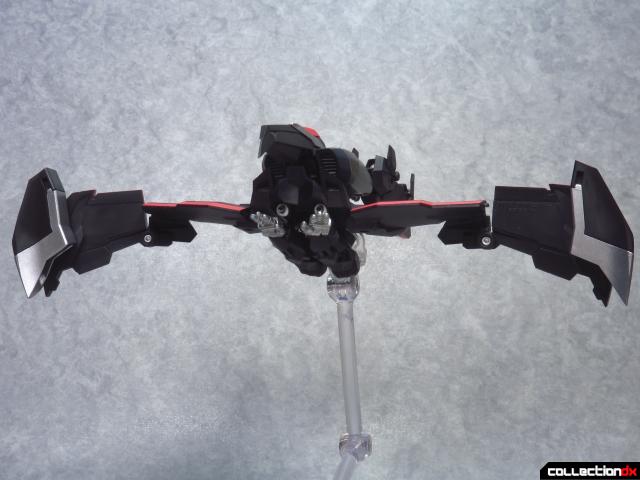 Strangely, the MetamorForce toy features an extra set of hinges in the wings which allow them to sorta curl up in a more bird-like manner. These are not a part of the transformation in any way, just an extra bit of functionality added by Studio Half-Eye. 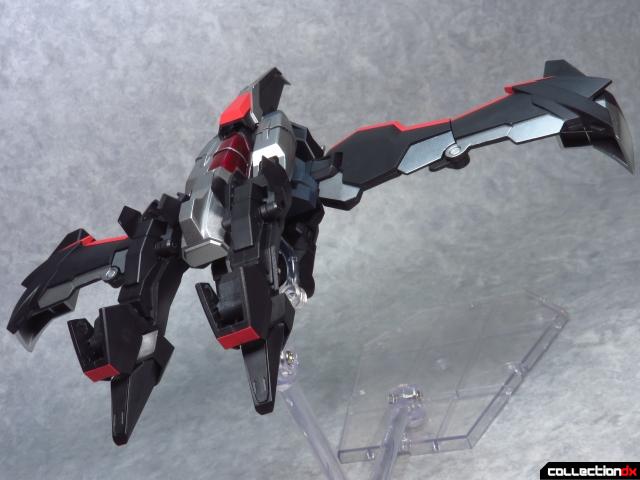 And sadly, no glowing psychic energy effect include, so we'll just have to imagine Shinobu kicking thing up a notch with a hearty, "YATTE YARUZE!" 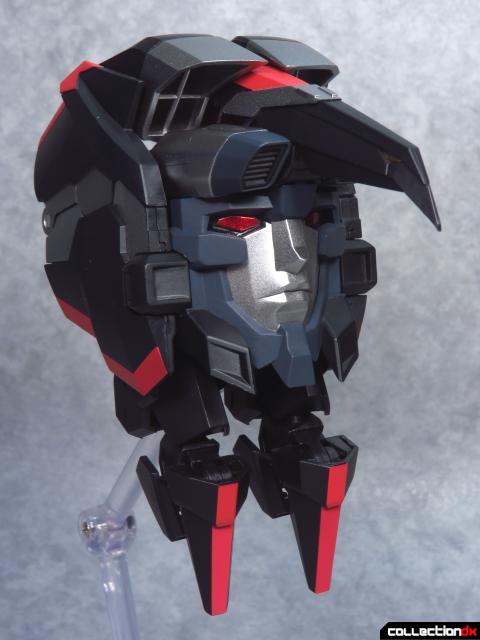 The Eagle Fighter's third mode is the head of the mighty Dancouga. While not as tidily locked together like beast mode, this stylish cranium definitely looks the part. 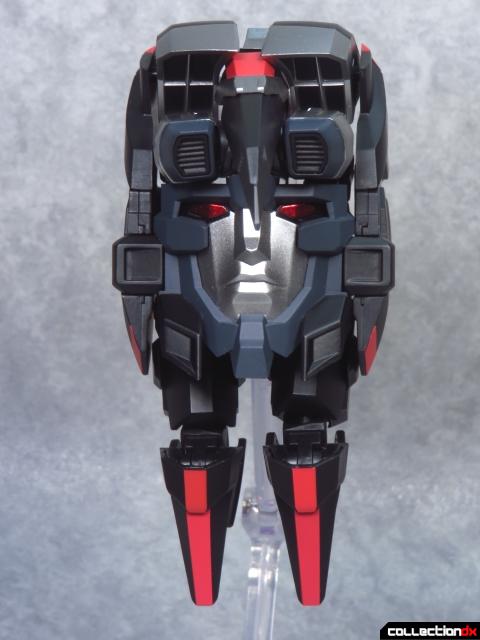 Sadly, without some kind of base or faux neck to plug it into, the head is left floating about with no real purpose other than fulfilling the Eagle Fighter's need for three modes. 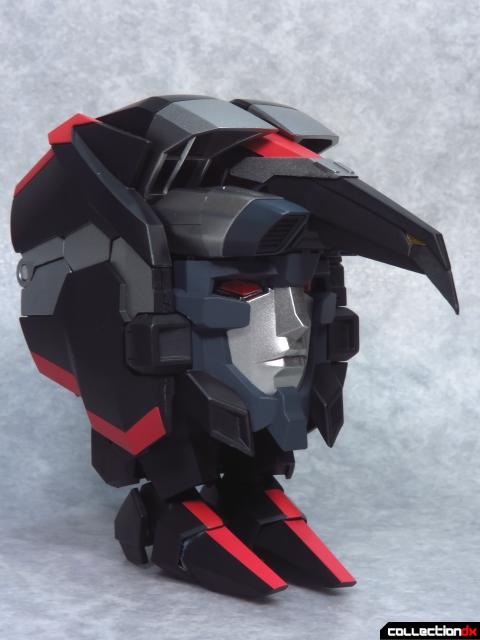 You can leave the robot's feet unfolded and rest the Dancouga head on the ground, but then it just looks like a very depressed Gradius enemy or a strangely handsome Rowlet. 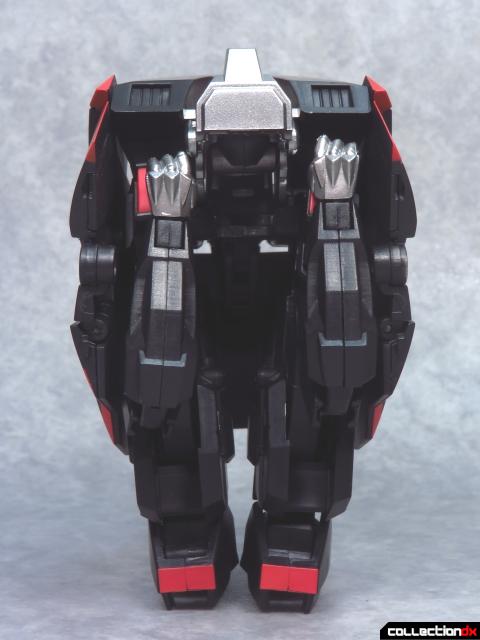 The inside of the head is pretty hollow, with no clear indication of how it could attached to a theoretical in-scale Big Moth. 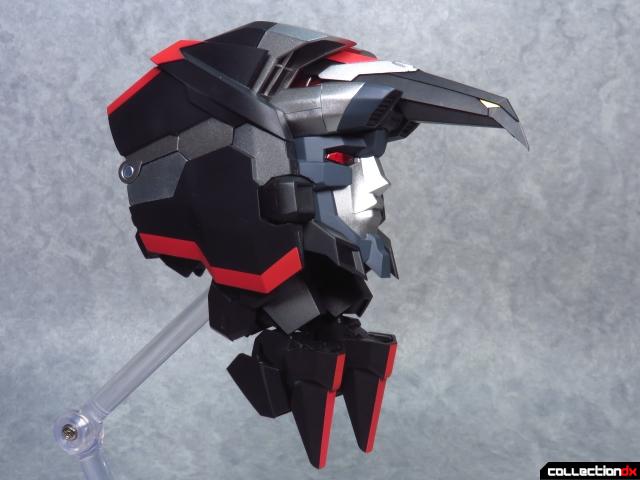 Still, it is fun to imagine a roughly Perfect Grade Gundam sized Dancouga with this Eagle Fighter forming the head. 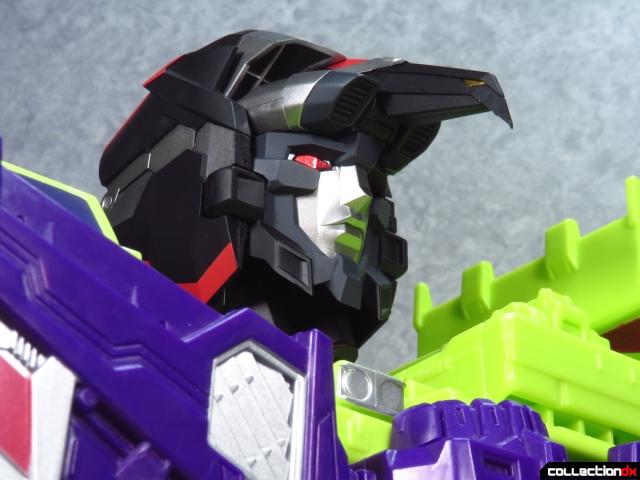 Or prop it up on a Titan-class combiner to create the Super Construction Machine God DEVASTATOR. 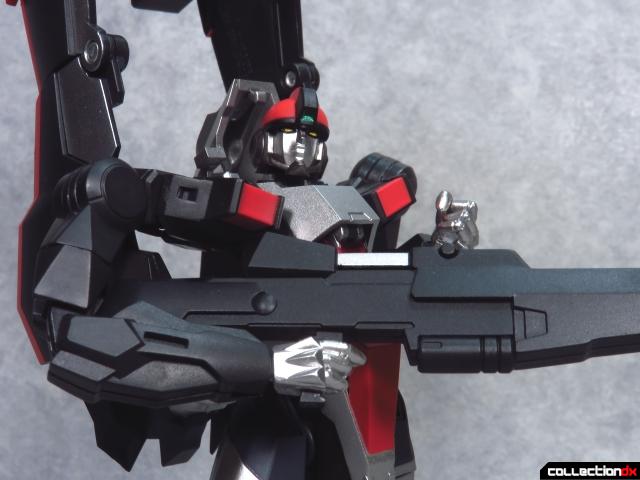 Overall, the MetamorForce Eagle Fighter is a toy that fills a niche within a niche. This is a figure not only for hardcore Dancouga fans, but ones who especially love Cyber Beast Force's lead machine. And while it is a good quality action figure, its premium price (14,800 yen!) and limited appeal make this Eagle Fighter poised to target only the CBF faithful. That said, I get the feeling this figure will end up heavily marked down like a lot of Sen-ti-nel's products, which might make it an easier sell to more casual Dancouga fans.