When discussing toys, people often talk about the "Feel" of a toy. What they mean by this is not the physical feeling, but rather what emotions and memories the toy evokes when handling it. As collectors, we are heavily tied into nostalgia, and this nostalgia often makes all the difference in our purchasing decisions.

With Rey's Speeder, it was not nostalgia, but hype, that led me to purchase it. It was another one of my Force Friday purchases, and I thought I should pick up at least one vehicle. People say these new toys have the "feel" of the vintage kenner toys, but is that true?

Lets talk a bit about the enigmatic Rey first. She's obviously one of the main characters in the new Star Wars film, but we know little about her. She scavenges the ruins on the planet Jakku, and she gets around on this speeder, who's nomenclature is unknown. Some call it the flying popsicle. Either way she is key to the story, and as such, deserves some attention.

The box is nice, with some wonderful painted art, and a die-cut window showcasing the included figure. 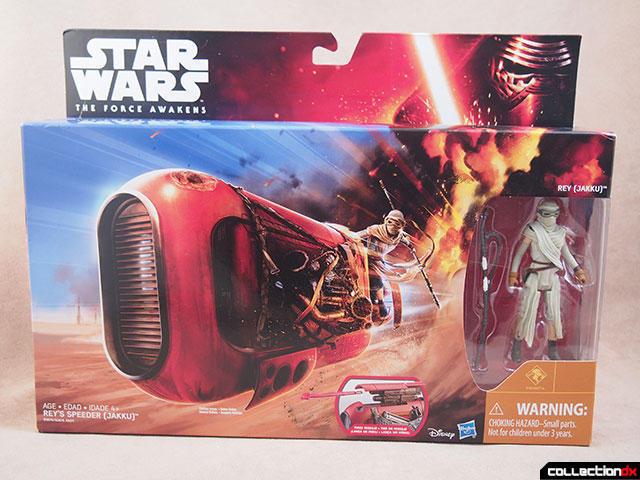 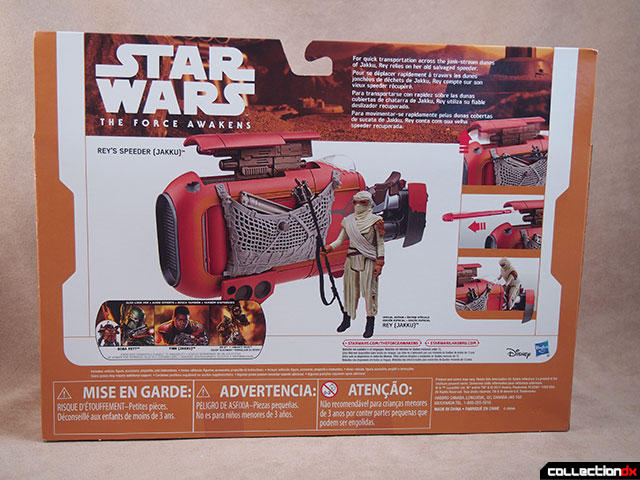 First, let's look at the Rey figure. This figure is exclusive to this set. Here we see Rey bundled up and ready to face the elements on Jakku. Her goggles are reminiscent of a Stormtrooper, don't you think? 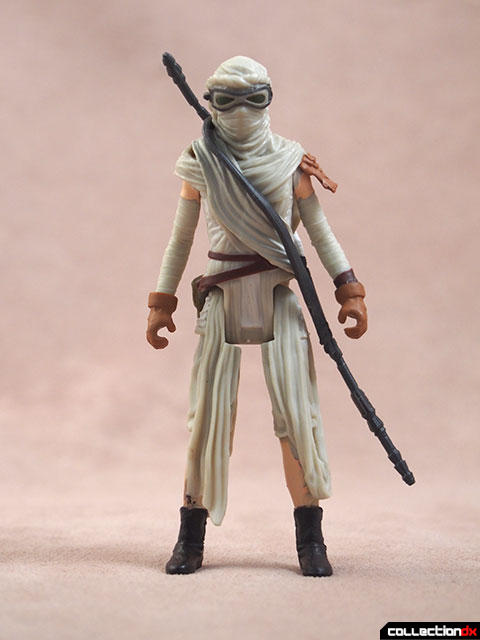 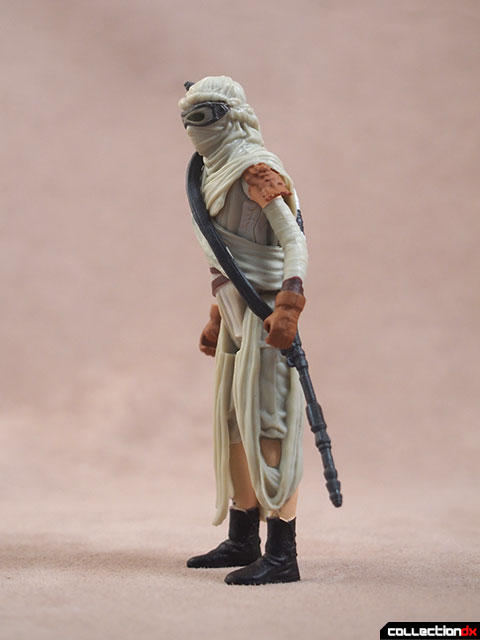 The figure only has four points of articulation, and she comes with a long staff weapon that can be slung over her shoulder. 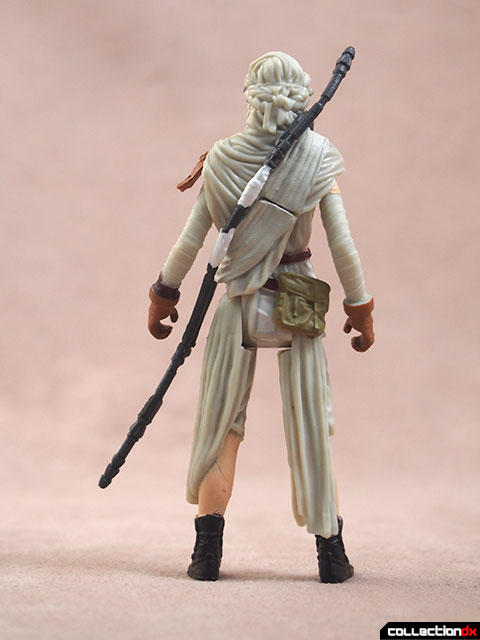 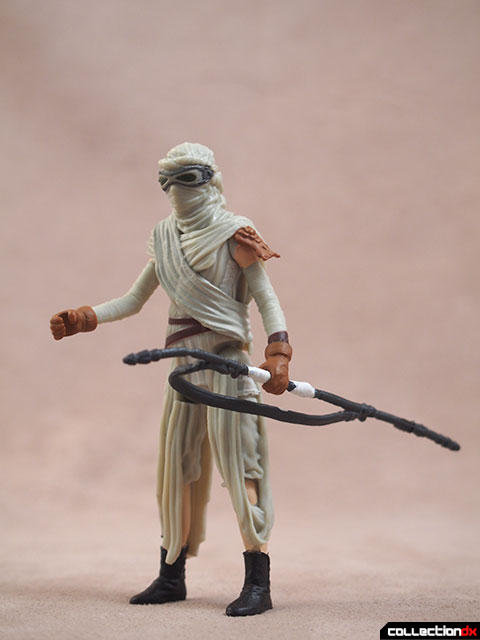 She's a great little figure that is nicely detailed and painted. Rey is designed in such a way that she can sit on the speeder without the need for bending knees. 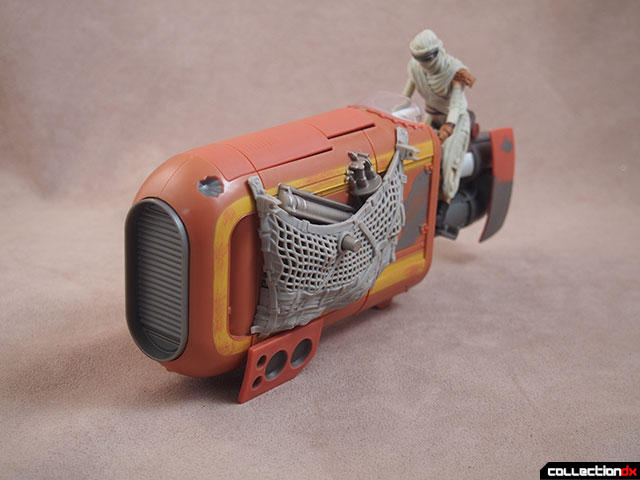 The speeder is basically a giant engine with a seat. There's a large air intake on the front, and a net on the side to store items that she scavenges. Despite being an odd shape, the Speeder can stand upright due to clever positioning of the fins. 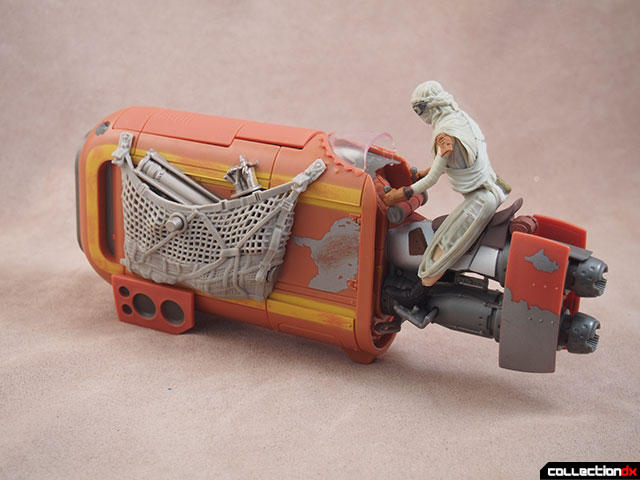 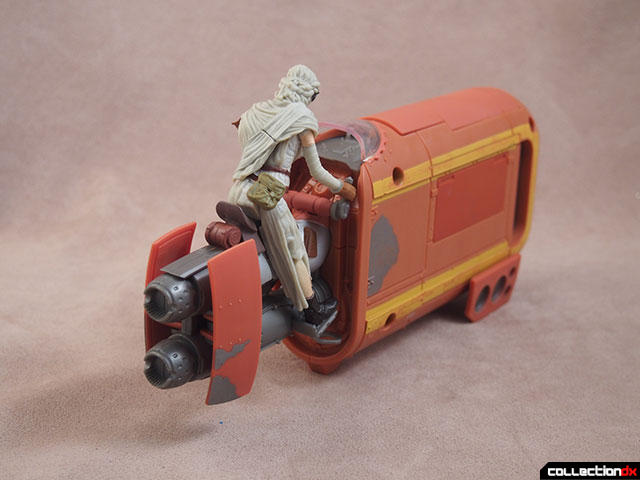 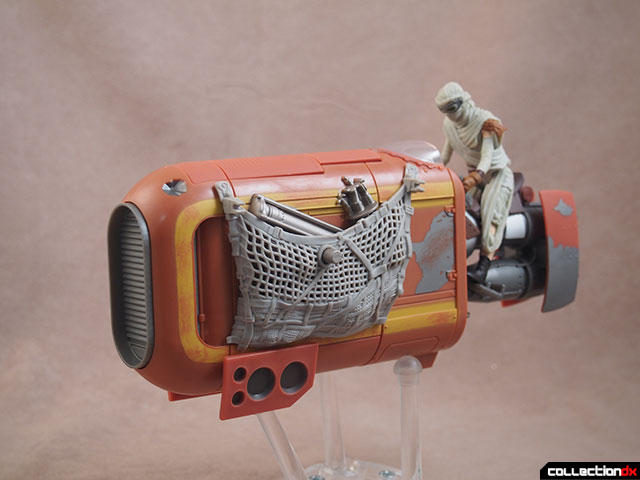 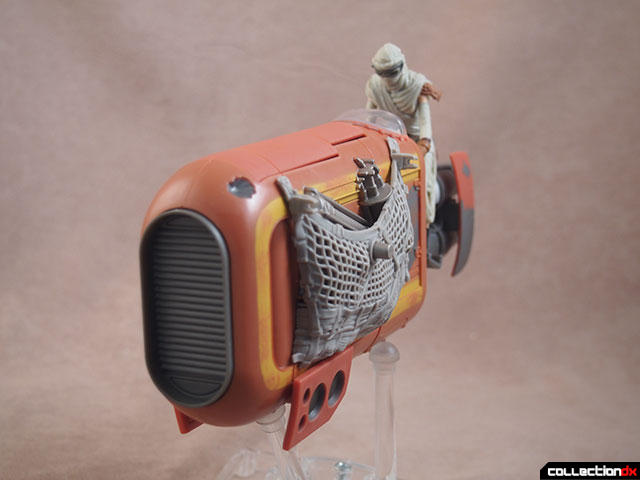 The rear fins are movable, perhaps a kind of air brake. 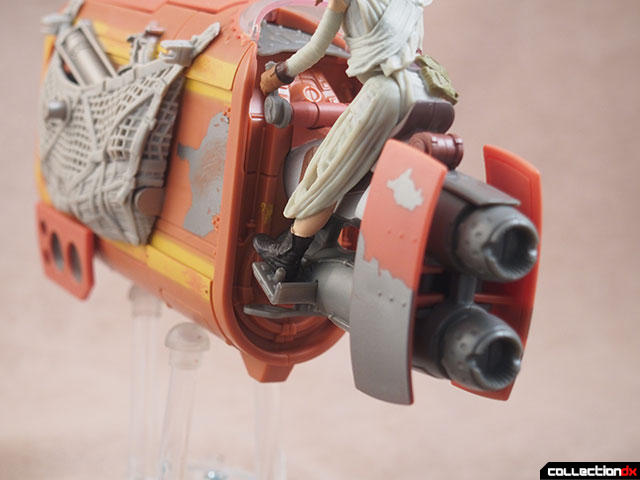 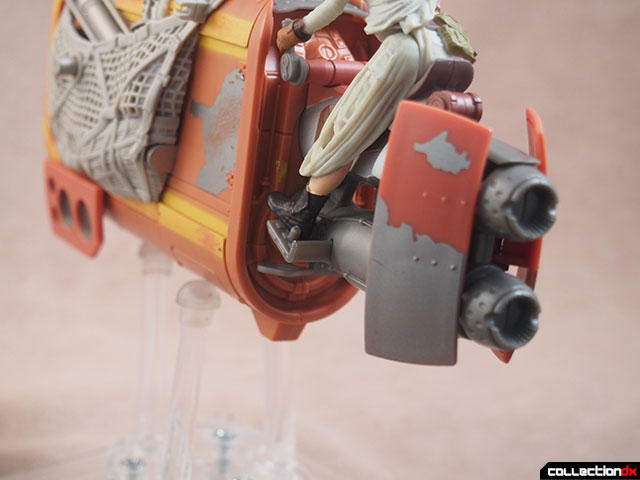 A missile firing feature is activated when you push a button on the side. One push springs up the cannon, and the next push fires the missile. 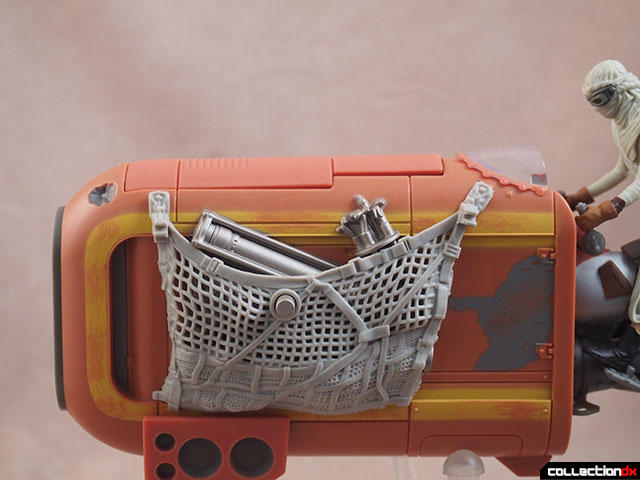 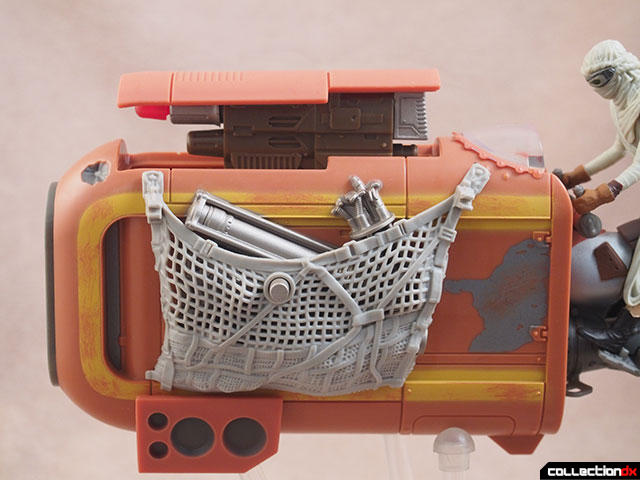 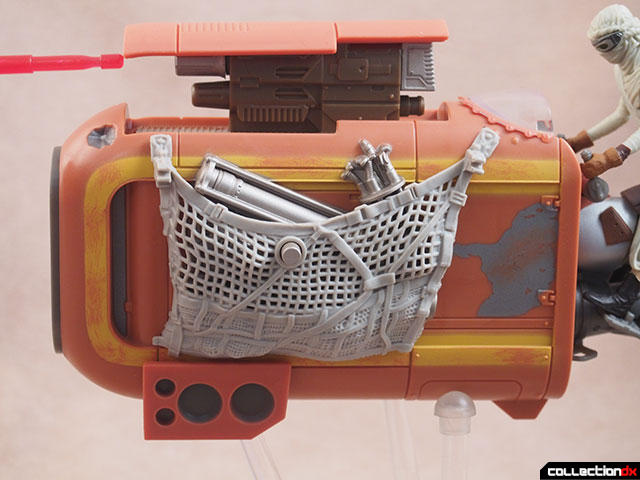 While riding, Rey can either hold her weapon, or it can clip on to the side of the speeder. 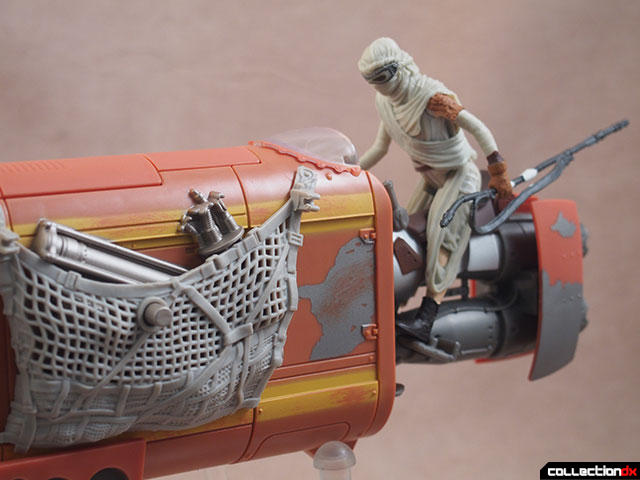 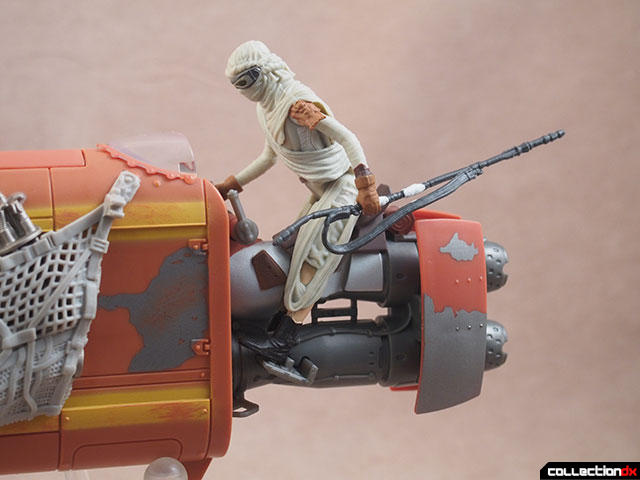 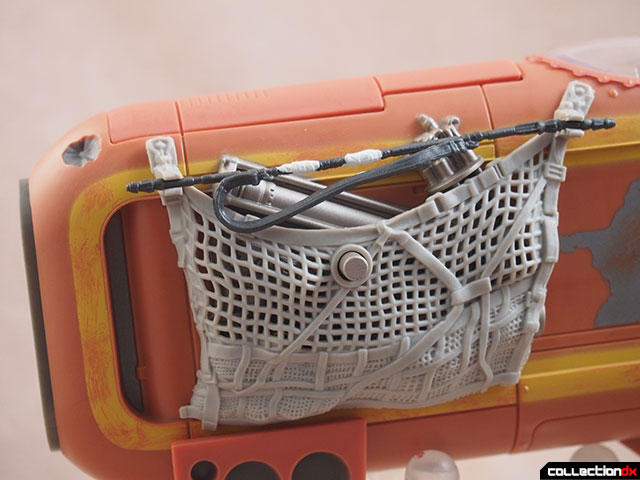 Does Rey's Speeder have that vintage feel? Yes, but not the vintage you are thinking of. This toy evokes memories and notes from the POTF2 line, Kenner's re-launch, rather from the original toy line in 1978. Say what you want about the figures from POTF2, but the vehicles were stellar. While still retaining the aesthetic of the original vehicles, the POTF2 line added more detail and often more play value than their vintage counterparts.

3 comments posted
Nice. I've picked up most of

Nice. I've picked up most of the loose figures but haven't wanted to throw down yet on any of the vehicles. Not only do I not want to spend the extra cash but I really have no room for vehicles. I do hope some of these figures get repacked at some point though, especially this one and the other Finn.

It does give me a kind of "Kenner Mini-Rig" vibe. Except this vehicle will actually appear in the movie, I guess. I definitely has more of POTF2 look to it than the TRUE vintage vehicles. And I love POTF2 figures, FTR.