For every Gundam the hero must pilot, there is a rival mobile suit. In the case of the novel sidestoryMobile Suit Gundam: Hathaway’s Flashwe haveHathaway Noah, known as Mufti Nabiyu Erin, in theXi GundamandLane Aimein thePenelope. Technically speaking the Penelope isn’t a Gundam per se, it’s actually the name given to theRX-104 Odysseus Gundamplus its massive Fixed Flight setup. The result of all this is the RX-104FF Penelope and the fact we finally have a toy of this monster is pretty incredible really.

The mecha in this series were designed byMoriki Yasuhiroand for anyone who has seen his work in the anime adaptation of Zeorymer should know what that means. In short, both the Xi Gundam Penelope are very angular mecha cover in lots of pointy parts and suitably 80s shoulders.

To be honest, Hathaway’s Flash was always a pretty niche spin-off. Following on from the novel continuity ofBeltorchika’s Childrenit covered the creation of a new anti-Earth Federation force called Mufti. One of its main pilots is Hathaway, the son of  Bright Noah.

Written byYoshiyuki Tomino, the novels are interesting but also very bleak. They’ve had their fans over the years though, not least because Moriki’s designs definitely broke several moulds when it came to mobile suit design.

Over the years, the Hathaway’s Flash mobile suits have popped up in a few games. However, what really kicked this resurgence off was the double whammy ofGundam Unicornand theGundam Extreme Versusgames featuring a variety of the mecha.

The latter was key as it created a market for people who played with these mobile suits in the arcade and then wanting to have something similarly tactile back home.

While we already had a pretty execrableGundam FIX Figuration set of the Xi Gundam and Penelope, Bandai has finally approached these difficult designs as proper action figures.

So back inJune 2013 we received the Xi Gundamas part of the Robot Spirits Ka Signature line, as supervised and designed byHajime Katoki. It was a massive figure for the toyline and was a webshop exclusive with it.

As soon as the Penelope joined the Gundam Extreme Versus ranks, Bandai announced they too would be releasing another Robot Spirits figure.

However this time we had two variants, avanilla releaseand aMarkings Plusversion. The former was like the already released Xi Gundam, without decals and fairly monochromatic in terms of the coloring. The latter was a lot fancier though, with pre-applied decals and lovely two-tone shading in terms of some of the coloring.

The other major part to this toy was the fact the Fixed Flight unit was detachable leaving a fully playable RX-104 Odysseus Gundam underneath.

Again, this was a webshop exclusive but considering these things don’t come along very often I picked it up. 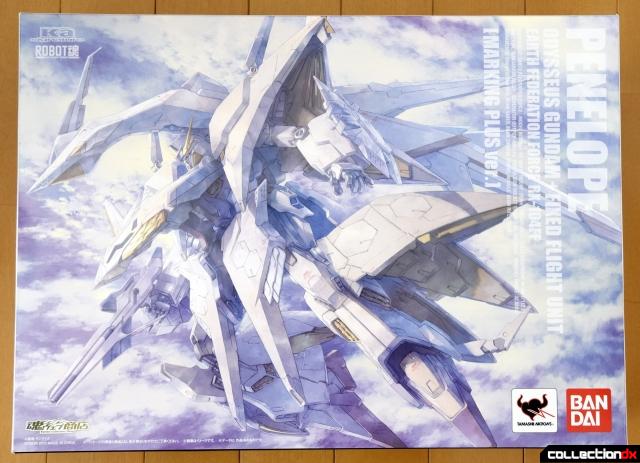 The Marking Plus version also came with custom box art by Hajime Katoki himself, something that is partly replicated on the included stand. 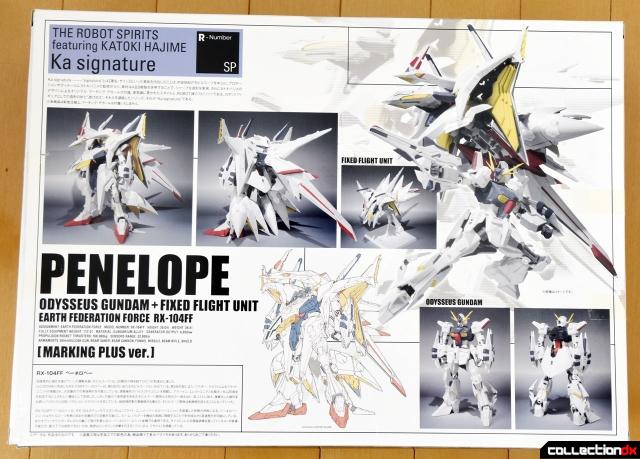 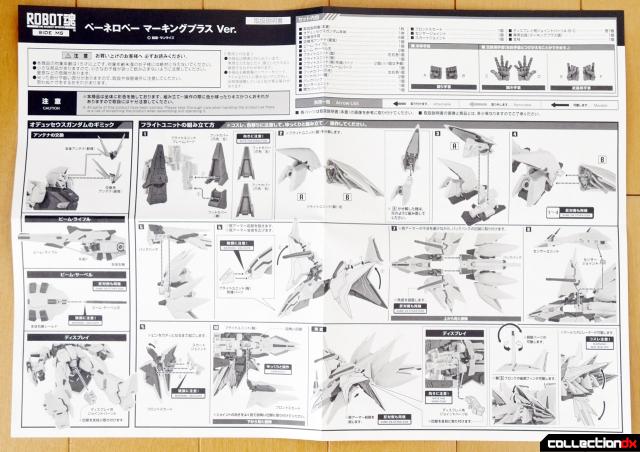 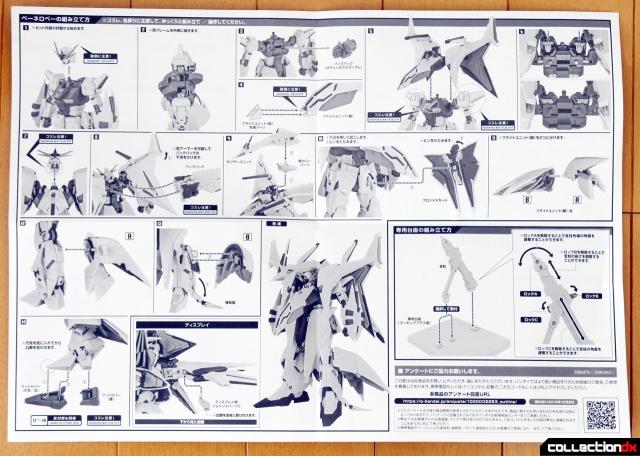 As you’d expect with all the parts involved the instructions are suitably comprehensive for a Robot Spirits figure. Normally, you get a tiny single page listing the gimmicks but the Penelope is a lot more complex than that. 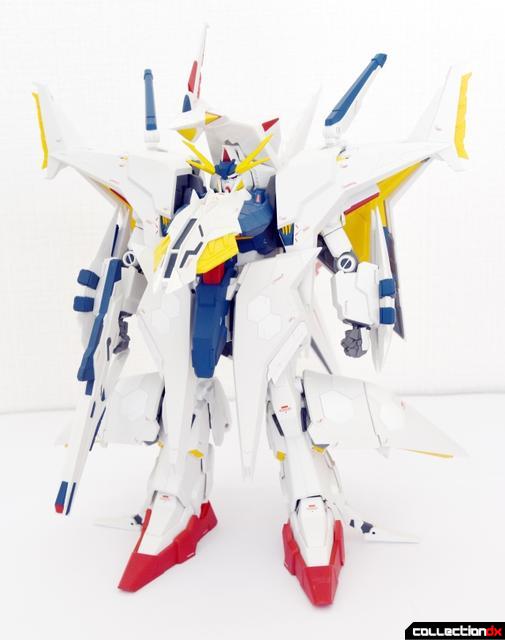 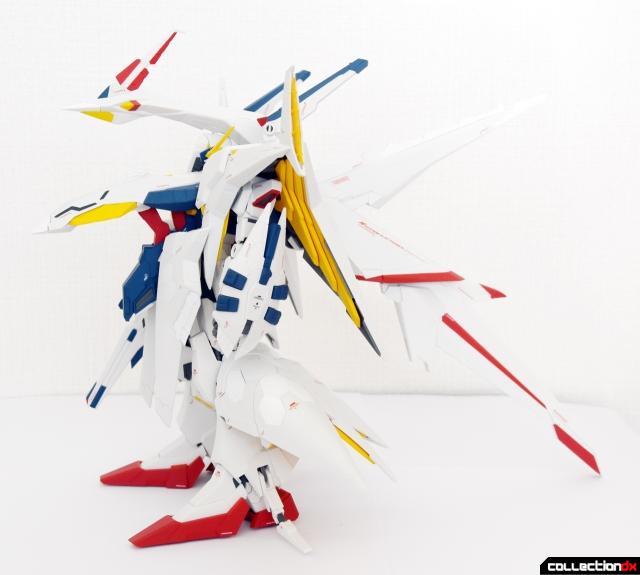 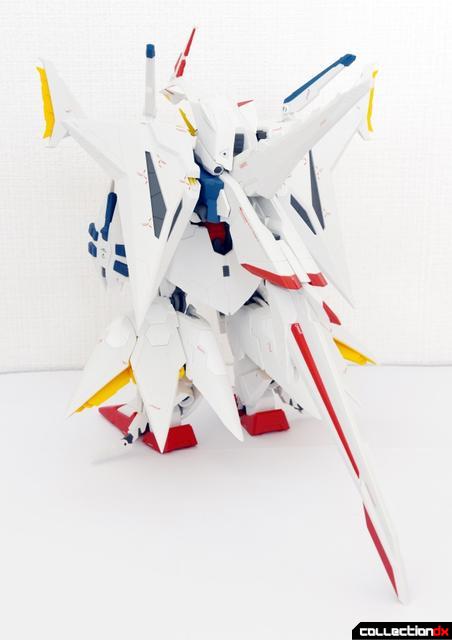 Even with all the parts attached, the Penelope can stand up on its own just fine. The Fixed Flight unit does limit grounded posing but that’s what the stand is for. 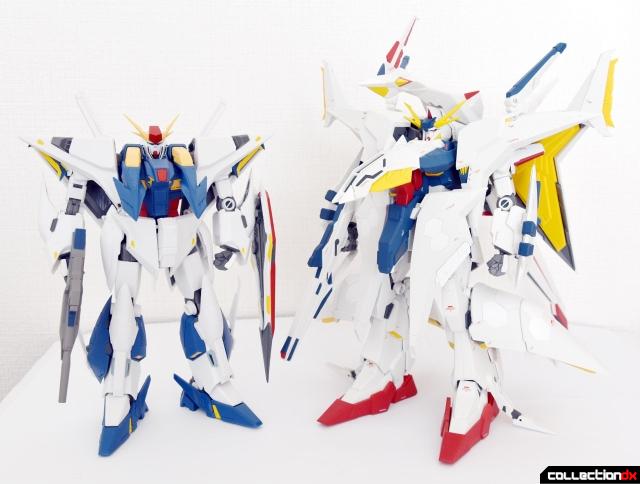 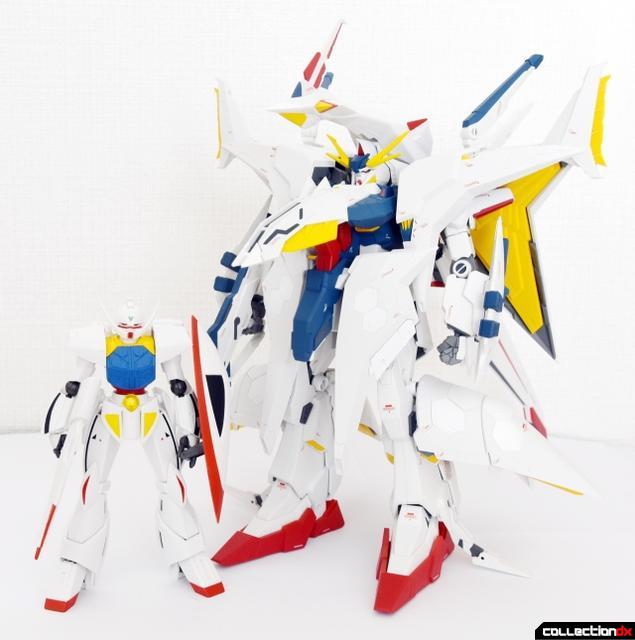 The Penelope is also massive and is definitely one of the biggest Robot Spirits toys I’ve ever owned. Even compared to the previously release Xi Gundam it is huge and it positively dwarfs the Turn A Gundam. 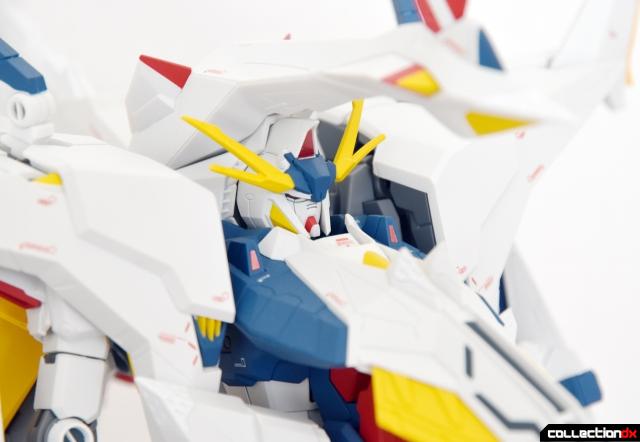 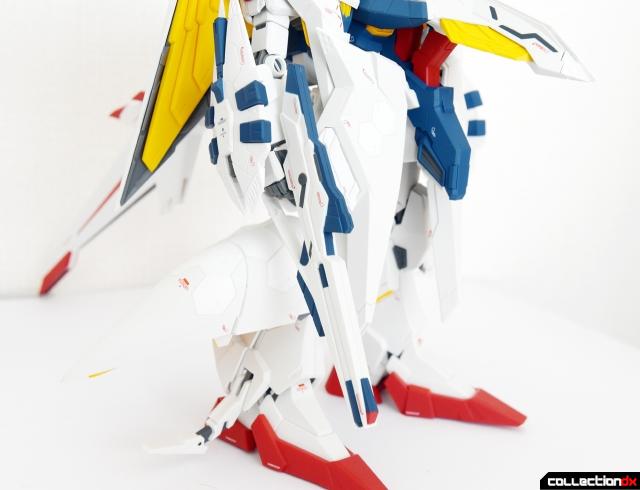 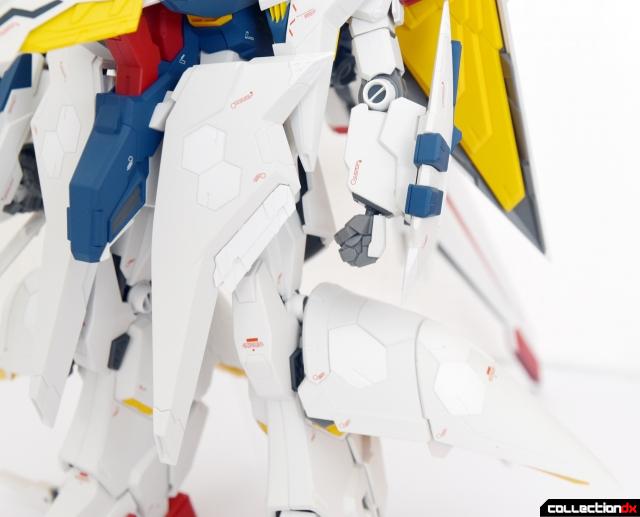 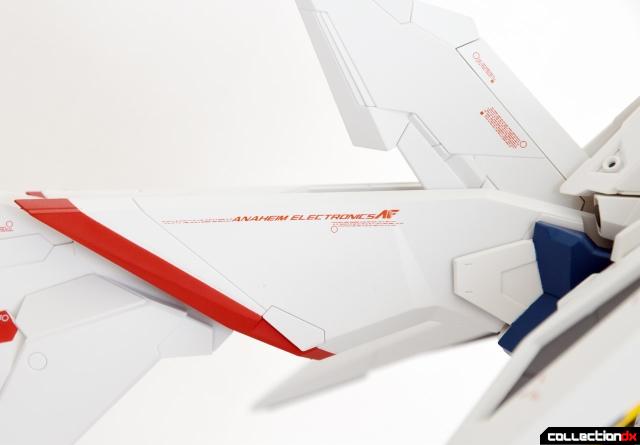 Compared to the standard release of the Penelope, you pay a chunk of cash more for all the extra detailing on the Markings Plus version. The detailing is very nicely done though and the extra two-tone shading is great as well. 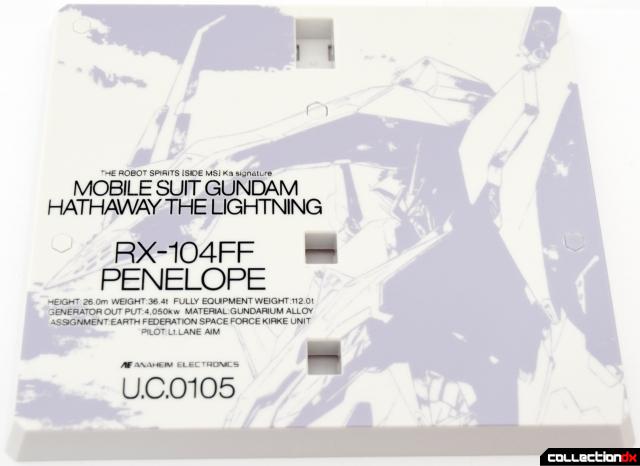 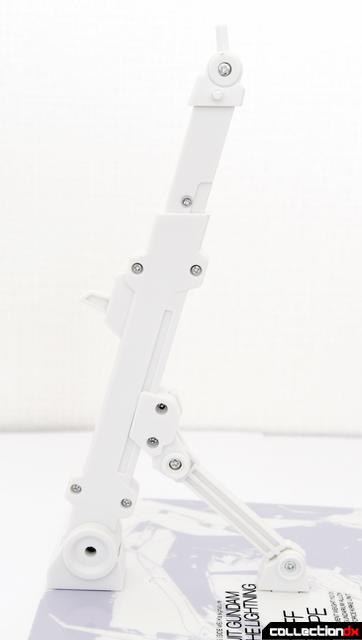 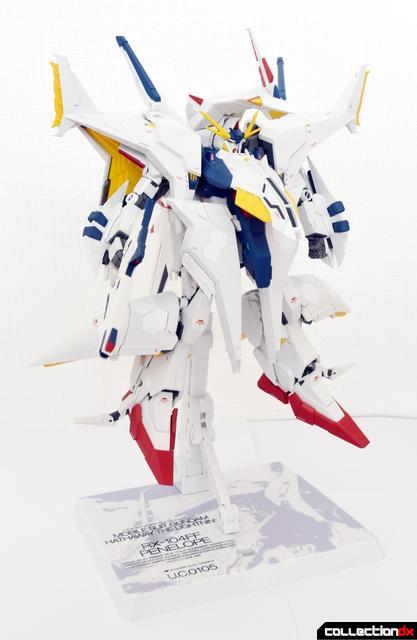 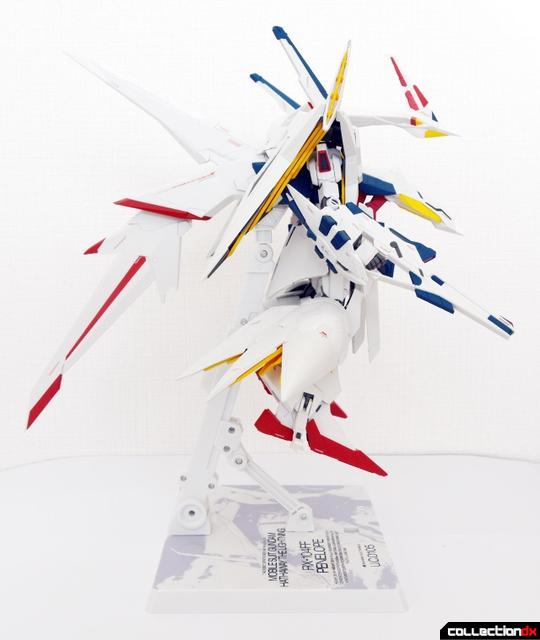 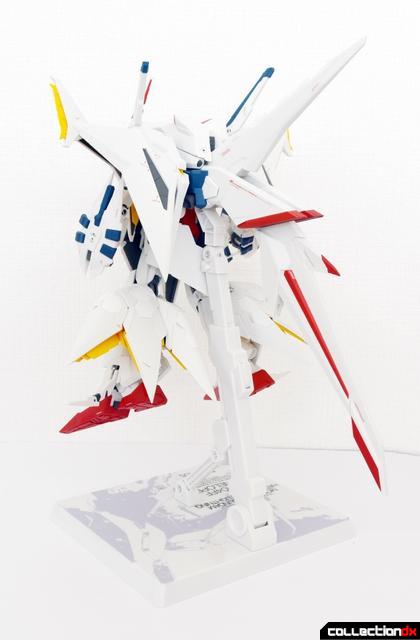 The Penelope looks the best once it is on its stand though, as it’s meant to be primarily an airborne mobile suit. The stand itself also has multiple latches to hold it in position. This is entirely necessary as the Penelope is heavy but the result is that you can do more poses on the stand compared to when it is standing. 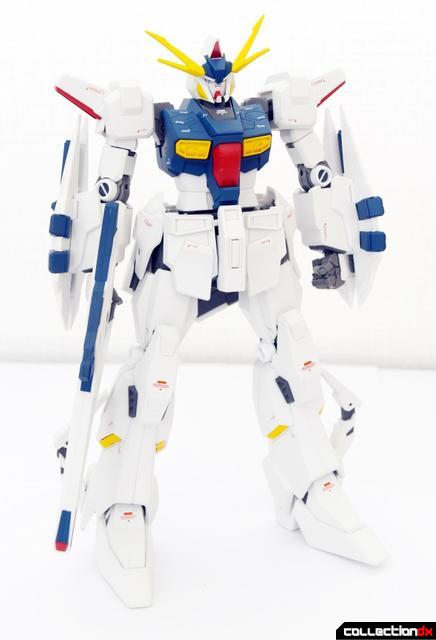 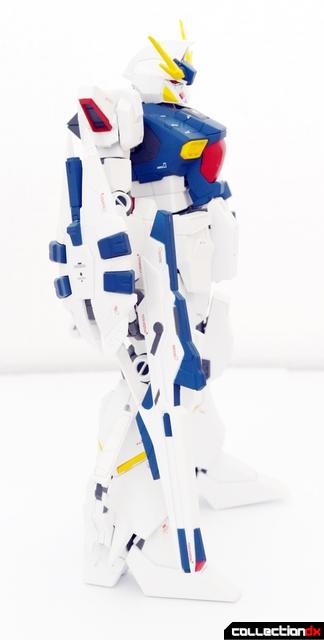 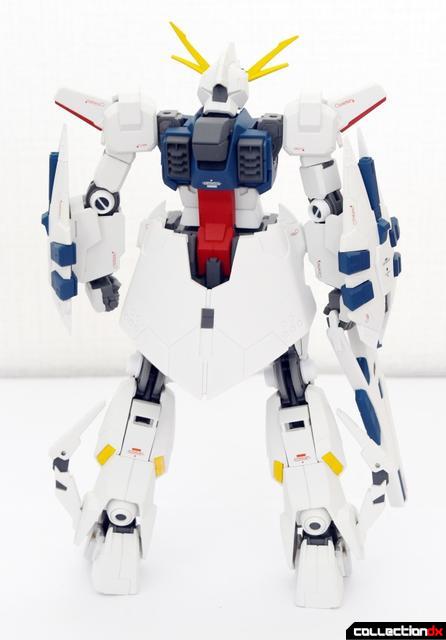 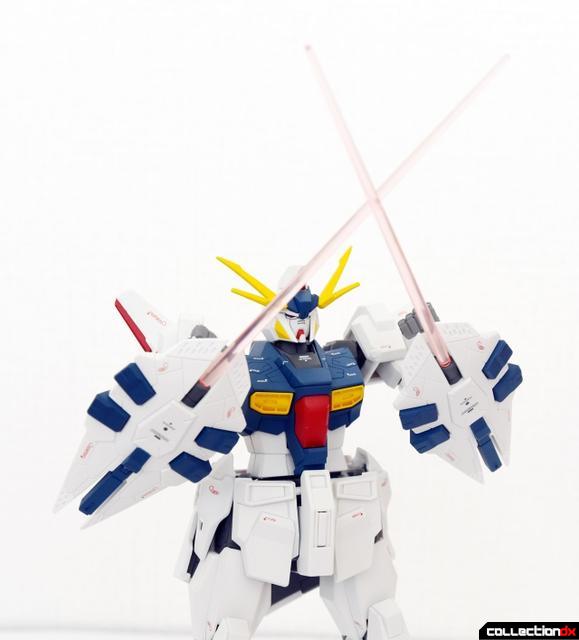 The reason why the articulation works so well is because the base Odysseus Gundam is very sturdy indeed. While the materials used are mainly ABS and PVC, the Odysseus Gundam has its joints reinforced with some metal pins (this is also common in other Robot Damashii releases). 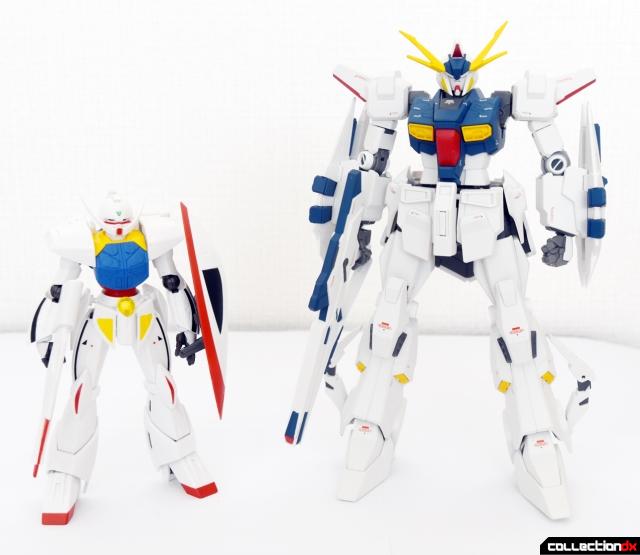 Even the Odysseus Gundam on its own is pretty big too, again with the Turn A Gundam for scale.

Overall the Penelope Markings Plus Ver. is a remarkable toy and the fact you can actually play with it like any other Robot Spirits release is amazing really. Considering the design’s complexity, the fact we have a toy is a bit surreal to be honest. So paying more for the Marking Plus version felt entirely necessary.

That said, this is a big figure and it’s heavy with it. Personally, I therefore think this is more at the display end of the scale compared to the Robot Spirits Turn A Gundam for instance. The stand definitely helps show it off though and I am glad it was included, as normally you have to buy stands separately for most Robot Spirits releases.

All things considered, this is likely the ultimate iteration of the Penelope we’ll get and completely destroys the godawful Gundam FIX Figuration version. If you’re a fan of Moriki’s designs or just anything spiky and like Robot Spirits figure, then this is an amazing addition to any collection.

Stunning figure, it's only a matter of time (looong time) before we'll see a Gunpla of this one.

Well, they did show off a bunch of Reborn 1/100 not too long ago with the Xi Gundam being one of them (just a drawing at this point).

I *really* think you should have taken these photos against some other background than white.

Have to agree as well, not to pile onto you. Probably a good idea to have a more neutral grey background for reviews especially in this case.

That all said I have this figure as well and love it. The Penelope is one of my favorite mobile suits and this piece doesn't disappoint. Can't wait for the upcoming Marking Plus Xi Gundam to replace the "old" one that came out a couple years ago.

The Penelope is one of my favorite big dumb Gundam designs. I'd love to own this, but man its price is a bit rich for me. Hopefully I'll be able to get one down the line though.