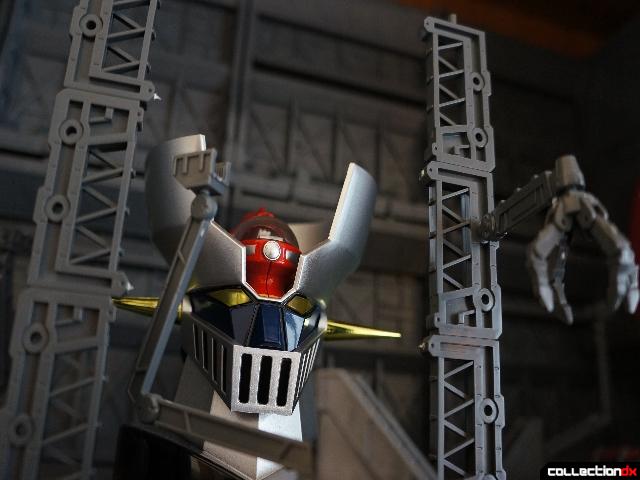 (I’d like to start off by giving a big thanks to CDX reviewer chachipower for helping me out with some tips on improving my photography set up !)

If there’s one thing that giant anime robots have retained over the past 40 years it’s a unique docking sequence and/or a vehicle to help initiate it. For Mazinger Z’s pilot Koji Kabuto, that method was his infamous hover and Jet Pilder crafts that would transport him to Mazinger Z and then act as the robot’s control center and cockpit thereafter.

Here is a longer clip featuring the Jet Pilder.

The docking sequence was considered so iconic among the creators of the series that it was featured in Mazinger Z’s opening intro and then started a trend with toy makers to manufacture Mazinger Z heads and pilders. This helped give collector’s something more that would allow us to come one step closer to that the sequence we witnessed on screen. Among the most iconic of these was Bandai’s soul of Popynica Mazinger head and Pilder. Now, Evolution Toys has giving their own try at a new Mazinger Z head display piece and Pilder set, one that puts it on the same level of amazing detail as Bandai’s iteration, but is also lacking in a few minor fronts. 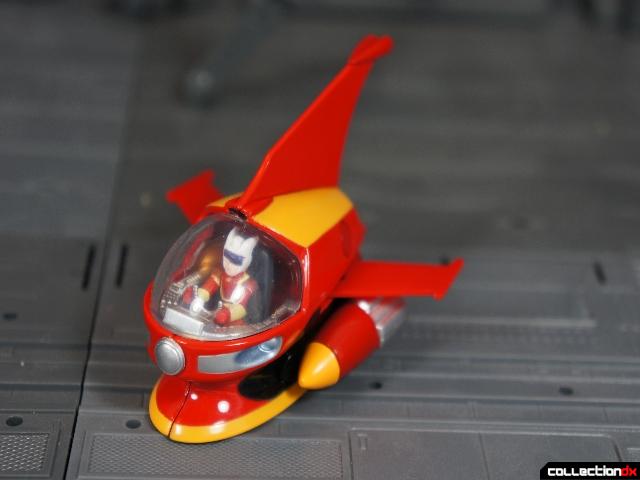 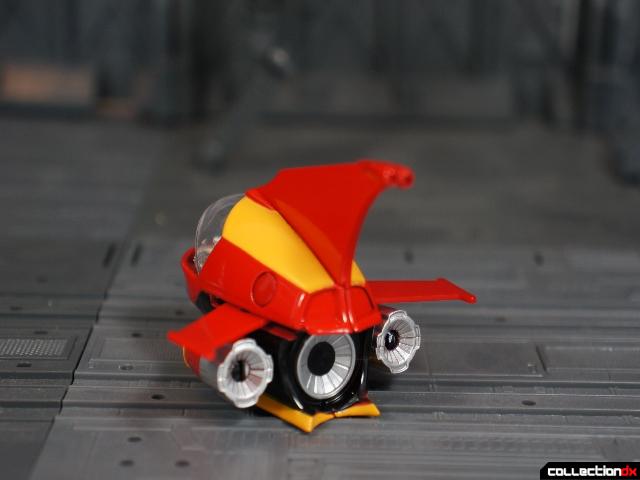 Starting off with the Jet Pilder. I personally always thought of the Hover Pilder as the more iconic vehicle, but seeing the Jet Pilder at this scale for the first time in hand has really made it grow on me. The color scheme used here is a variation of bright red, bright yellow, black, silver and some light blue in the head lights. Probably the best thing about this little guy is that it’s nearly entirely made out of die cast metal, with the exception of the inner cockpit and windshield, the non-removable Koji figure, the side jets/missiles as well as the wings and two screw covers that come unattached in the box. 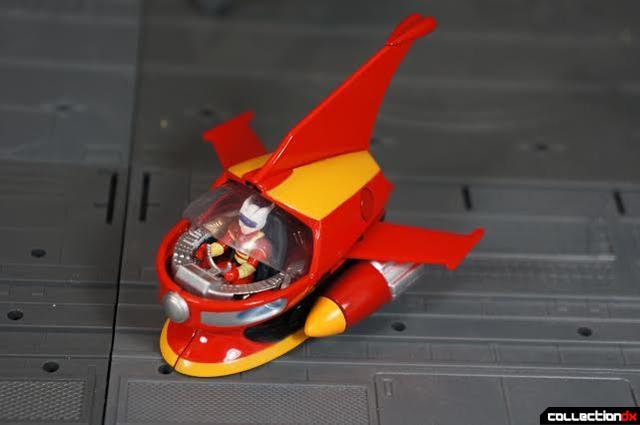 The windshield only opens half way. Once open, there’s some nice molding inside the cockpit but without any paint applied to the control panel within. 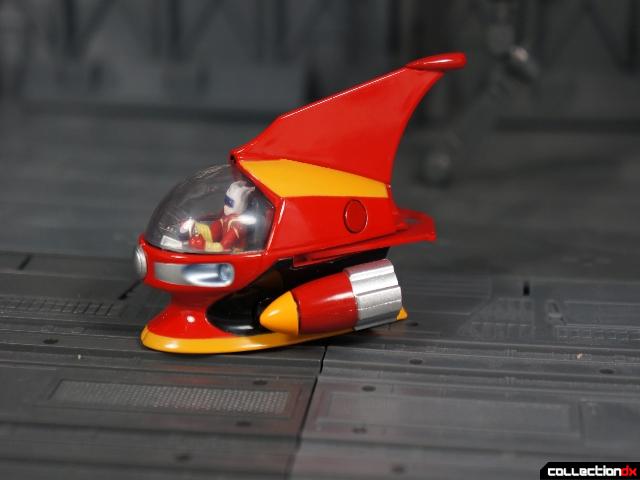 The wings can be tucked into the sides of the Pilder to allow it to be docked into the head piece, and out for flying poses. The side jets/missiles are tucked in for flying, and can be pulled out and rotated for a vertical takeoff and landing. 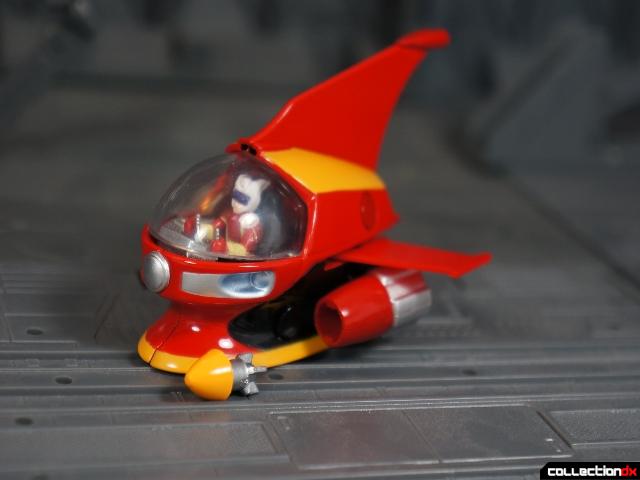 There’s no firing mechanism, but the missiles can be pulled out to reveal molded fins. 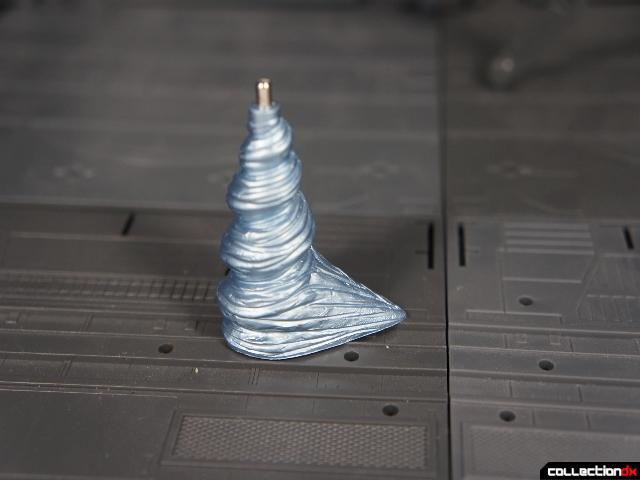 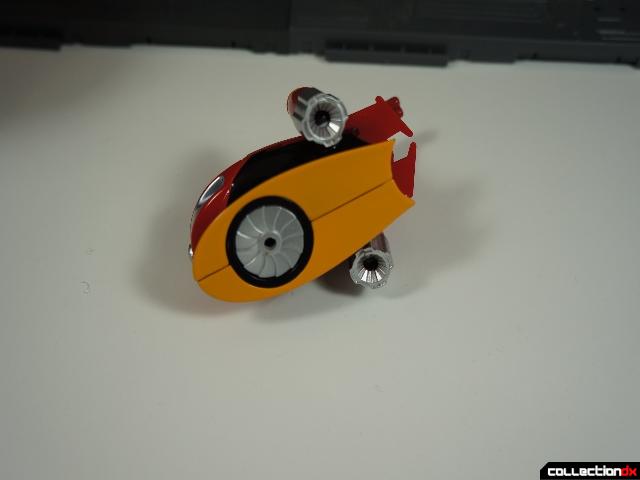 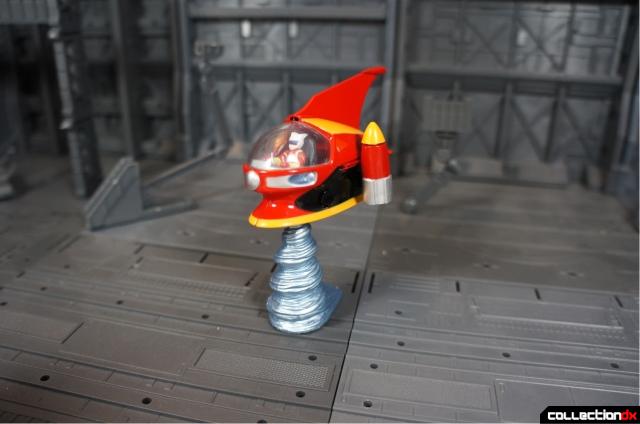 The set also comes with a smoke affect part that can peg into the bottom side of the pilder to simulate the landing and takeoff scenes. 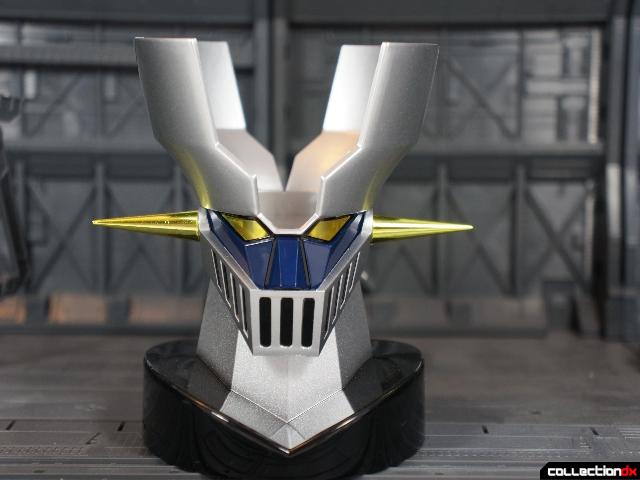 Onto the main piece, and I’ll take this opportunity to reveal an embarrassing collector’s flaw that got the best of me with this purchase. When I preordered this piece I had seen some early prototype pictures and then assumed that it was meant to be equally large if not as big as Bandai’s Mazinger Z head, I never even considered looking at the dimensions from the site I ordered it from, boy did my jaw drop when the size of it was much smaller than I anticipated. Now, don’t get me wrong, there’s nothing wrong with it being much smaller than I’d hoped, it’s just not what I expected. Now, with that out of the way lets dive into it. 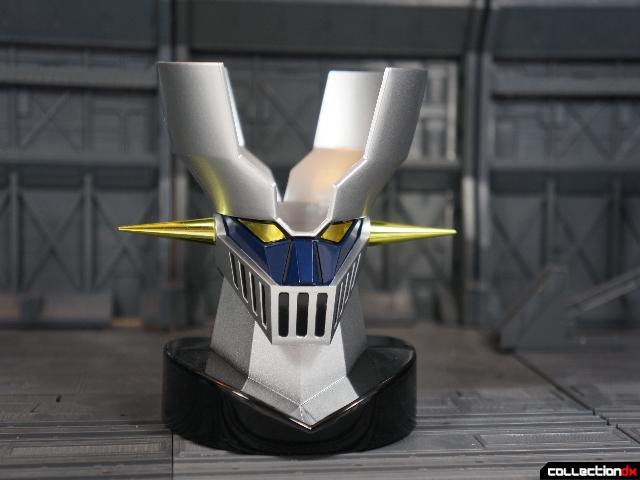 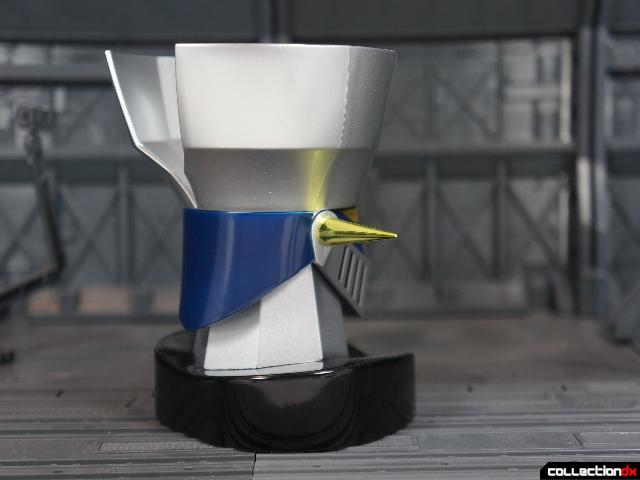 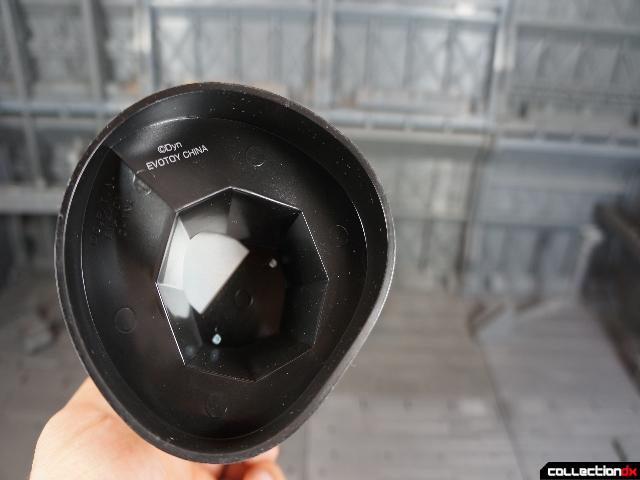 The head piece itself has some great details and color applications on it. From the transparent yellow eyes to the gold metallic horn like antennas and the dark blue surrounding the eyes. The paint scheme on the armor uses the traditional silver and dark blue with a glossy block on the base. One thing that caught me off guard was the applied blue color on the back of the head armor, I had to refer to a classic anime clip to confirm that color scheme as this piece was never colored anything but silver in full Mazinger Z figures. Apparently in the later episodes of the show, Mazinger Z receives some slight color changes. 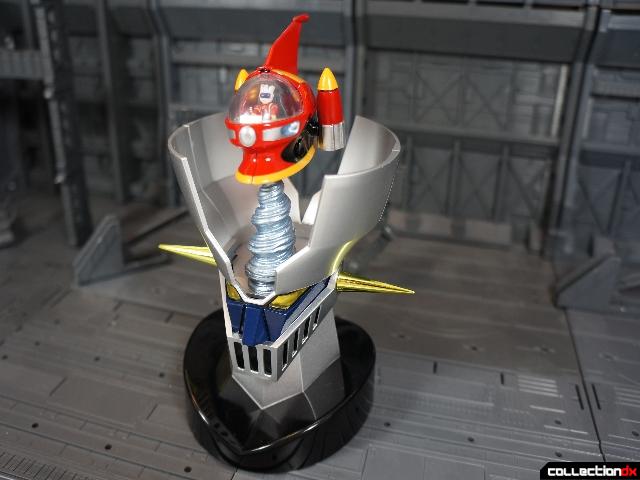 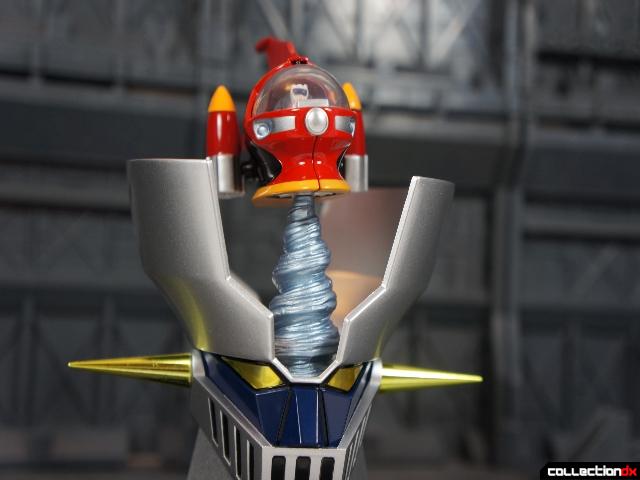 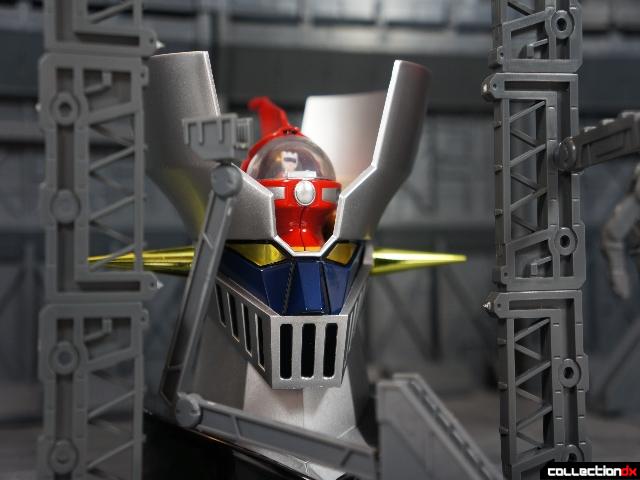 Here are my gripes with this piece. When held in hand, the head piece feels extremely light, and that’s to be expected due to the lack of any die cast content. Also, while this feature probably might have upped the price a bit, I feel that such an amazing looking display piece might have come a long way with the addition of a light up gimmick in the eyes. 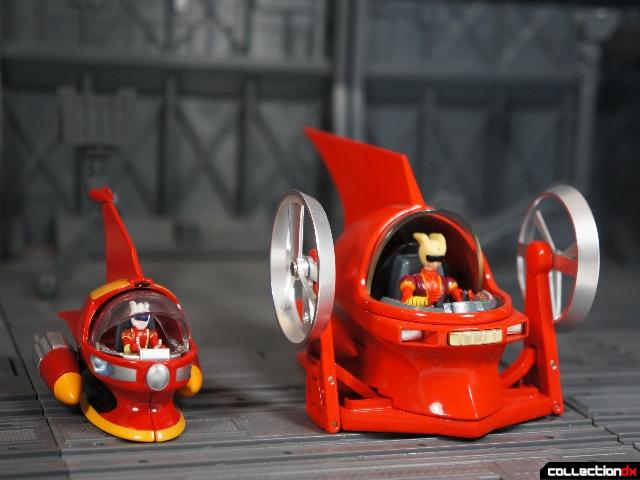 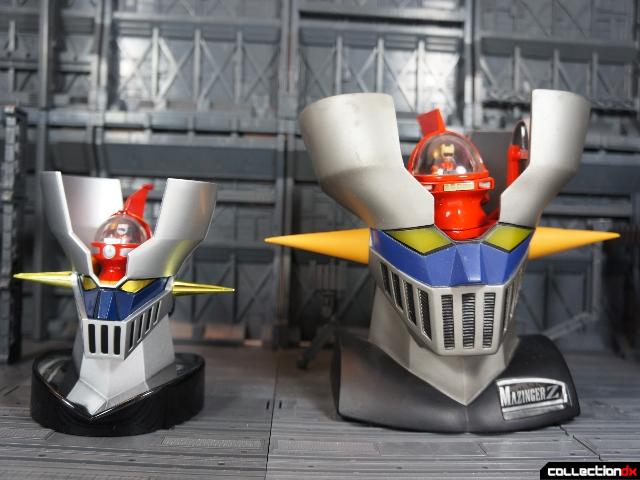 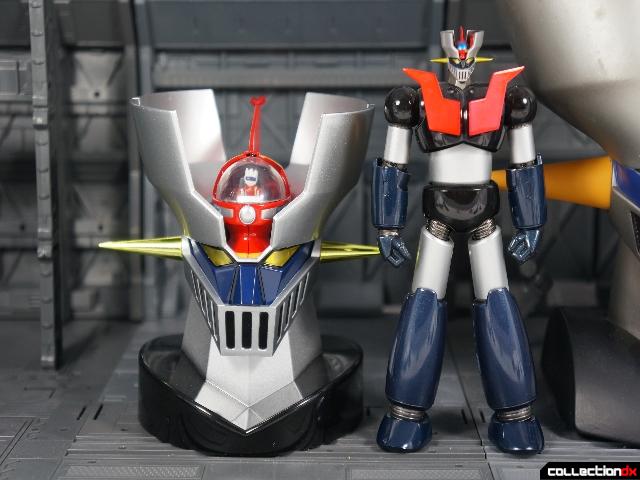 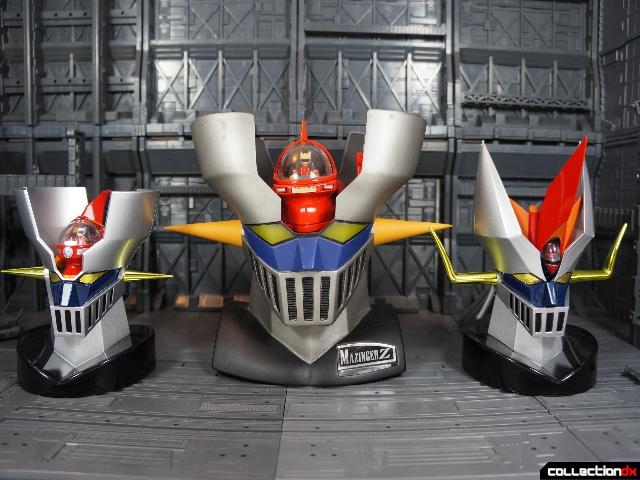 Evolution Toys Mazinger Z (left), Bandai Mazinger Z (middle), Evolution Toys Great Mazinger (right).
With a high degree of attention to details in the mold and an affect part that offers a few additional display options, I’d say this is an impressive display piece. Unless you can find Bandai’s original Mazinger Z display piece with the light up eyes and Pilder (sold separately) for a reasonable price, I’d say this is very well made alternative worthy of your shelf.