Bandai has been making some big moves in the KanColle merchandising cold war, with their latest sortie led by the Imperial Japanese Navy's quartet of battlecruisers. Fresh from the docks of Barrow-in-Furness is fan-favorite nameship of the Kongo-class! 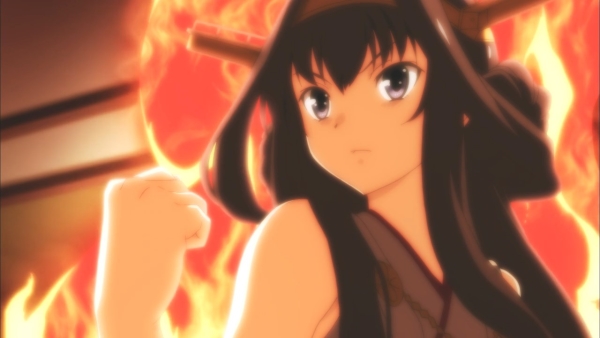 In the world of fleet girls, Kongo's boundless energy and equally boundless love for the admiral (aka the player) has made her extremely popular to both male and female Kantai Collection fans. As Max Factory and Bandai compete with their respective KanColle action figures, there was much speculation on which company would land the license to make the beloved boat. With the dust from Bandai's full volley cleared, let's see if their Armor Girls Project Kongo Kai II is a worthy member for an admiral's fleet. 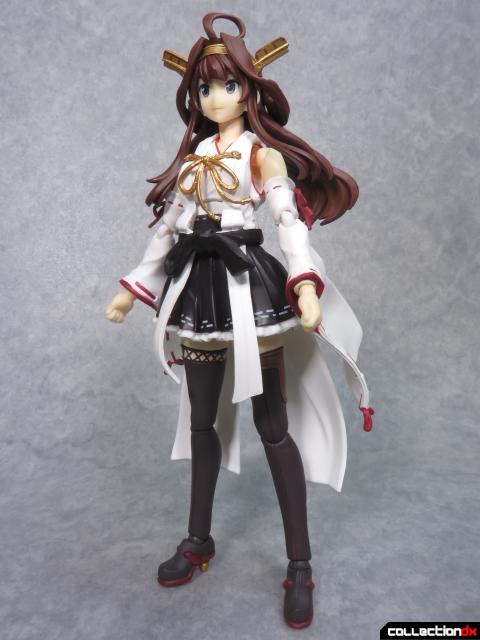 Armor Girls Project Kongo makes a good first impression, with an amazing figure sculpt that captures the peppy gal's modified shrine maiden outfit extremely well. She has several layers of PVC clothing, with the long bands on her front and back being soft and flexible. Kongo measures a little under six inches tall from bow to stern. 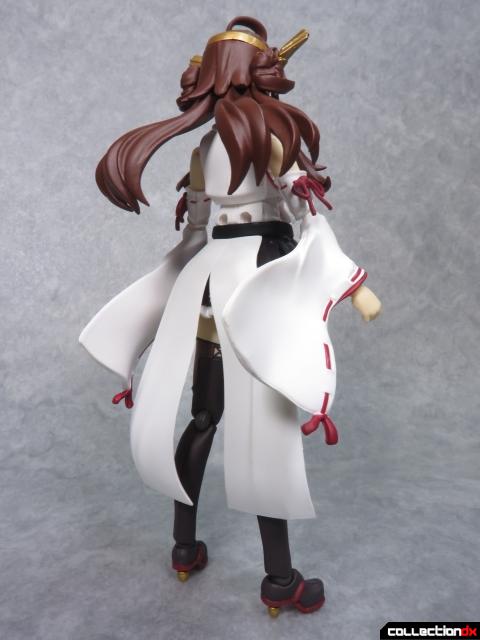 Unlike her fellow boats, Kongo does not wear crazy rudder heels, and thus has a much easier time standing up than say, Yamato or Nagato. 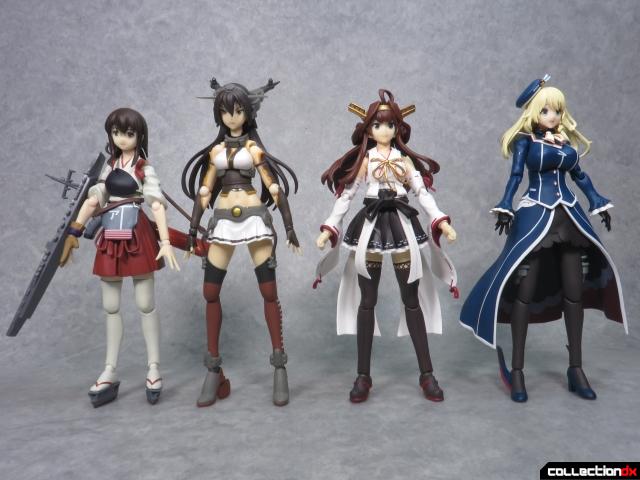 The AGP figure fits in well with her ~1/12 scale seafaring comrades, be they from Max Factory or Bandai. 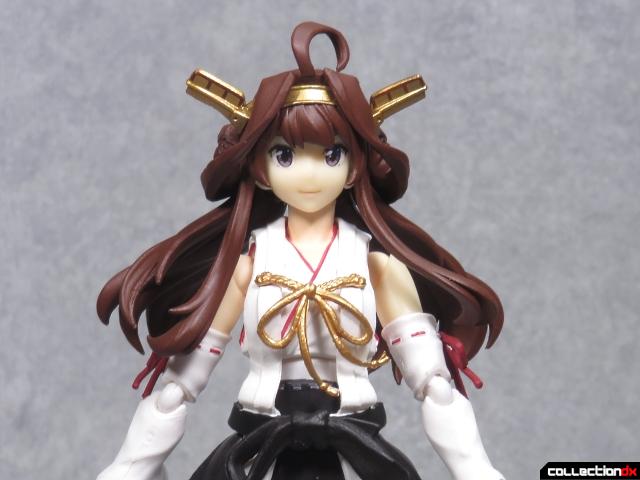 To swap face parts on Kongo, you must unplug her hair buns from the side of her head before pulling her front bangs out. Her default face is a pleasant smile. 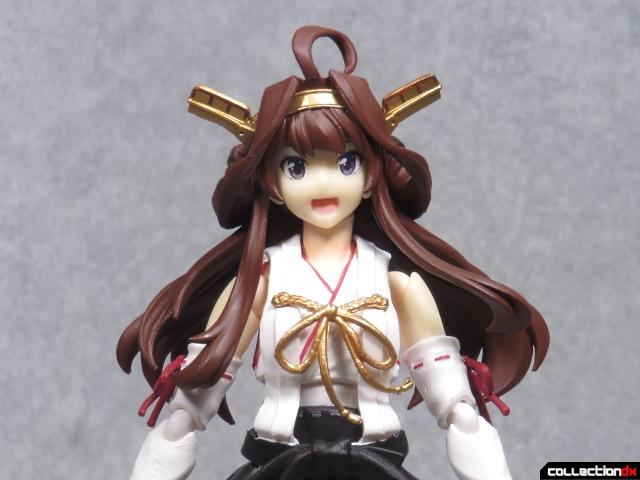 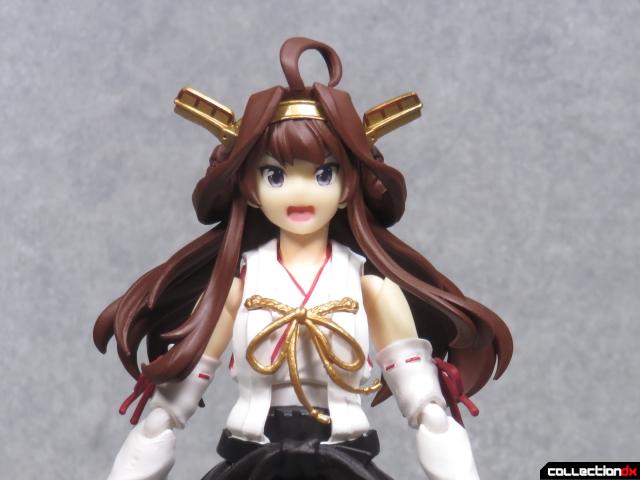 Her enthusiasm carries over to Kongo's "battle" face, which is subtly different from the previous one. It can be hard to tell with her hair in the way, but Kongo's eyes and eyebrows show a much more aggressive look. 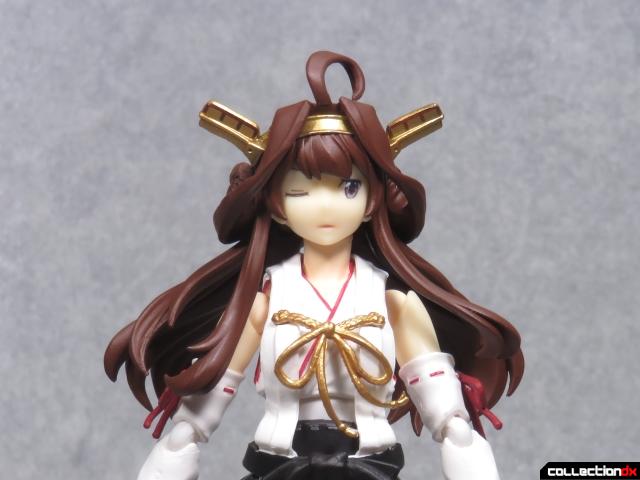 The last face part is the requisite "feelin' bad" expression. I feel like this face loses its purpose without an optional damaged outfit. 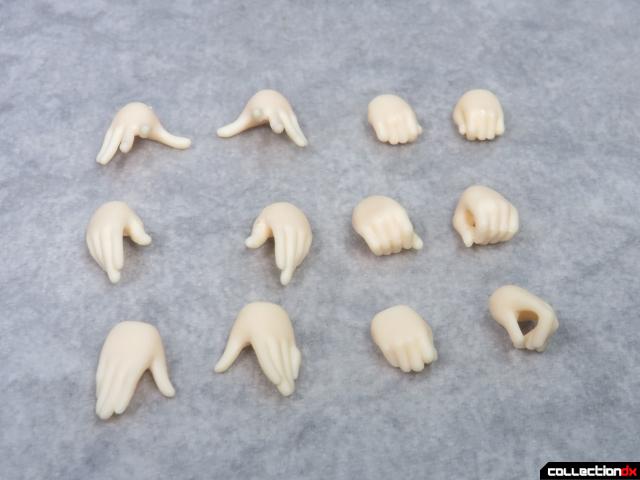 Kongo comes packed with no less than 12(!) different hands. Since a bunch of them are just variations on an open palm, it's hard not to think Bandai went a little overboard here. 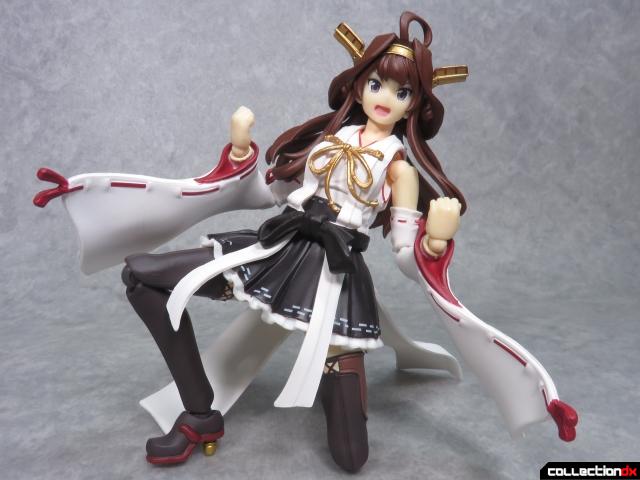 Kongo has a full range of articulation, but some joints are limited by her outfit. For example, the black ribbon around her waist is actually a part of the white bands going down the front, and they hug her waist so tightly that her torso joint can't really turn left or right. Also, while Kongo's skirt and coattails are flexible, they still impede how much you can move her legs or how close to the ground she can sit.

As a word of caution, please be careful with the figure's joints when you first take the figure out of its box. Overly tight joints resulted in my first Kongo being damaged when I tried moving her neck. Just use some warm water and slow movements to loosen things up. That said, the joint Bandai used in this AGP figure's neck seems a touch more fragile than what I've encountered on their other KanColle toys. 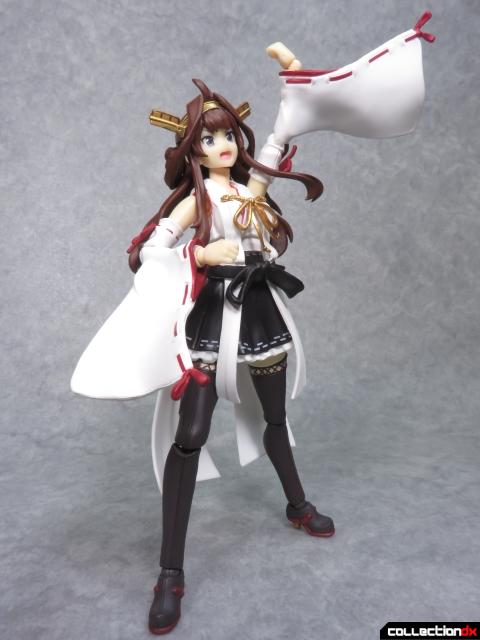 Also, I wish there was a way to rotate Kongo's long sleeves separately from her forearms. While the sculpted folds look really nice, it tends to look weird when each sleeve is falling in a different direction relative to each pose. 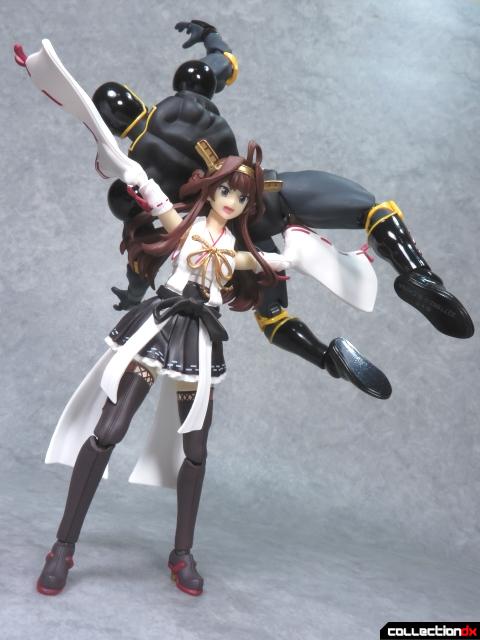 Gripes aside, once you get a feel for the figure, Kongo feels pretty solid. Still, I feel like she's not quite on the level of an S.H. Figuarts or figma. 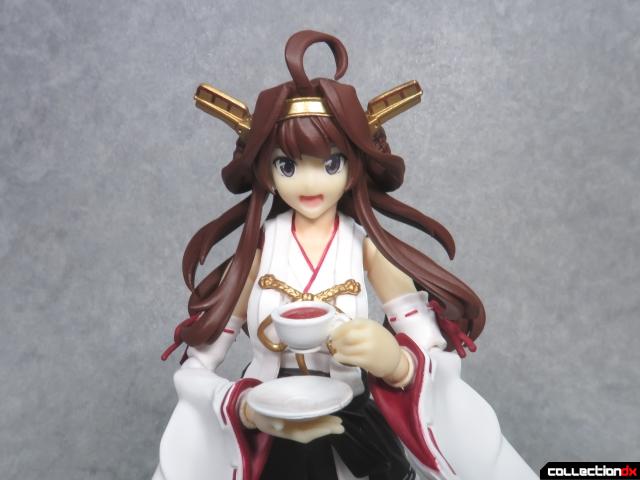 And speaking of figma, Bandai threw in a neat set of character specific items for Kongo with this tiny tea cup and saucer. Since the real life Kongo was actually built in England by the Vickers Shipbuilding Company, the creators of KanColle gave the ship girl an affinity for British goodies (and for sprinkling English words into her Japanese speech).

Unfortunately, Bandai made the dishes separate from the hands that hold them, so they can easily fall out with the slightest bump. The tea cup isn't quite as bad, as it sorta clicks in between Kongo's thumb and finger, but the saucer just rests on top of a specific open palm type hand. Tea time with the boats shouldn't be this difficult! 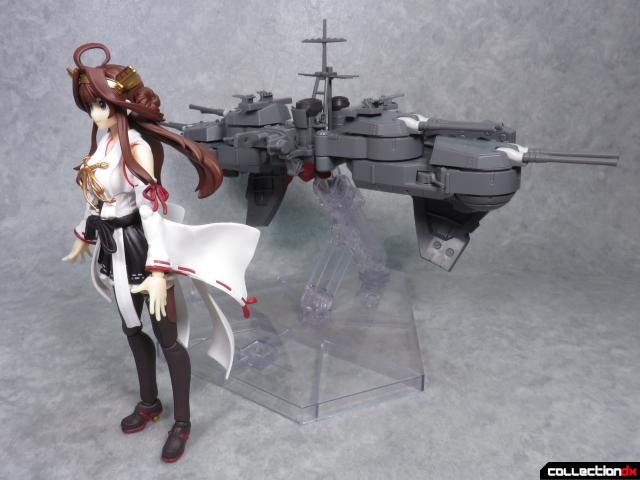 If there is one thing Bandai has done consistently well with their AGP KanColle figures, it's going all out with each fleet girl's weapons array. This take on Kongo's Kai Ni (II) upgrade gives her the firepower of her initial battlecruiser form, but with enough armor to be a battleship. This translates to a boat bustle loaded with more guns than sense. The rigging attaches to the now familiar Armor Girls Project stand, which does an acceptable job of holding the hunk of ship parts aloft. Though, again, it seems like a Tamashii Stage Act 5 would do the same job with less of a shelf footprint. 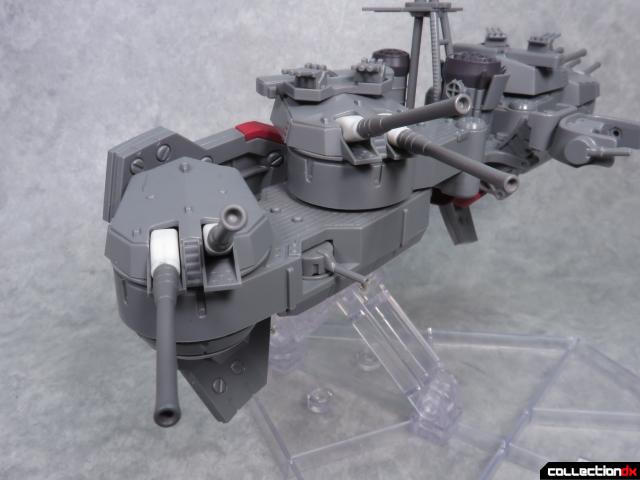 Kongo is ready to take on dozens of Abyssal ships by herself with four rotating turrets, each with a pair of elevating cannon barrels. Also note the smaller movable gun in the side of the hull. There is one of these on both sides of each hull half that makes up the weapons array. 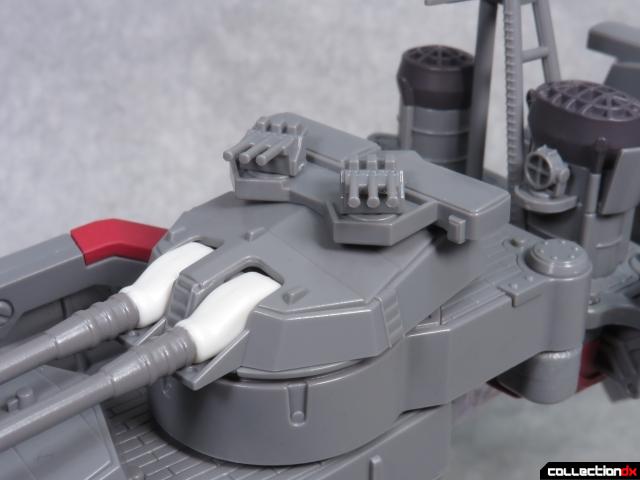 The innermost turrets also have a pair of smaller ones mounted on top. 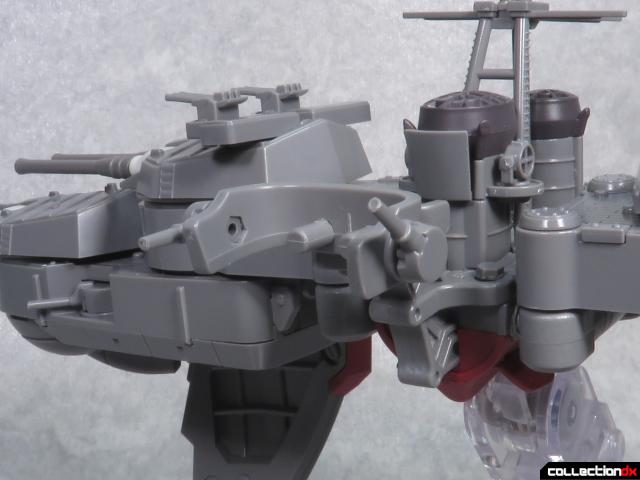 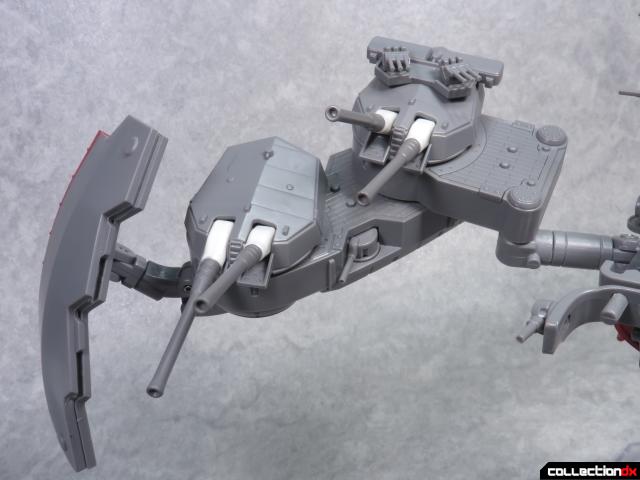 As a contrast to Max Factory's more faithful renditions of each fleet girl's equipment for their figmas, Bandai redesigns everything for their Armor Girls Project figures to create mechanical musume marvels. Multiple joints let each half of the faux-boat move around like they were made for Doc Ock's anime loving niece. 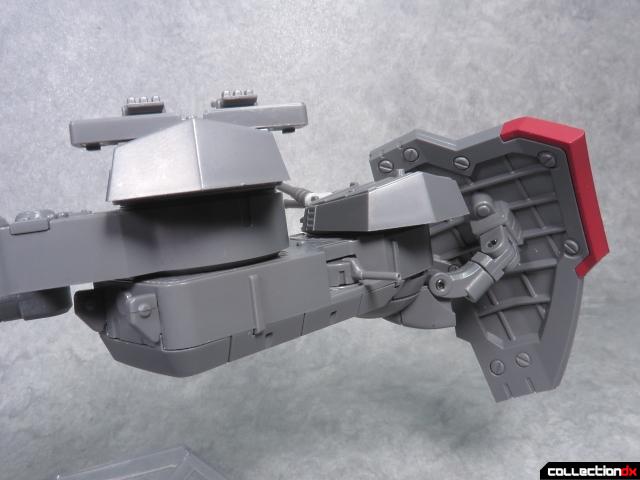 Even the ship bow-shaped armor panels can move every which way in order to provide maximum defense. 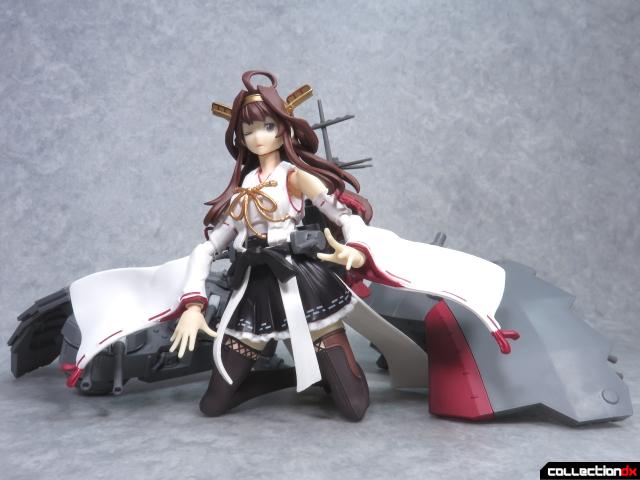 The ship halves plug into the movable arm joints, and are packaged separately from the middle section in the box. This allows you sorta recreate Kongo's "heavy damage" pose, though her skirt and coattails make it hard for her to fully rest on her knees. 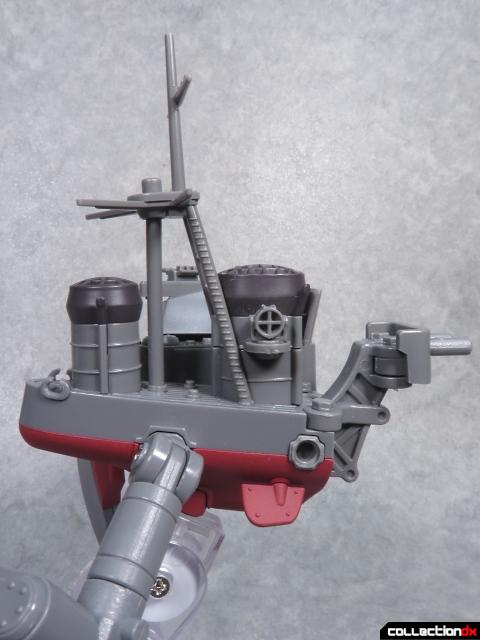 With the ship halves out of the way, you can see the high level of detail on the main section of the rigging. It's basically a miniature version of the real Kongo's conning tower, complete with deck plating and tiny searchlights. Note the hole near the front, where each hull half can peg into the middle section to give Kongo's rigging a more solid boat style configuration. Also, I would recommend taking advantage of Kongo's jointed hair tufts, as they allow you to work her luscious locks around the bulky smokestack and connecting bracket. 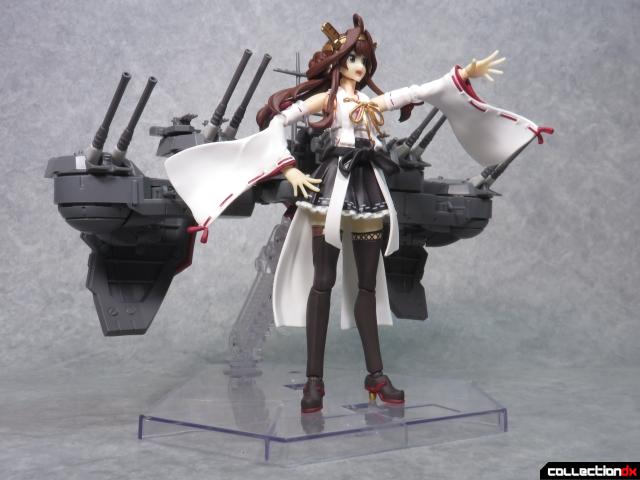 Once plugged in to her rigging, the AGP Kongo gets a much needed boost in playability. Now she feels like a proper fleet girl, and makes for a impressive display of femininity and firepower. 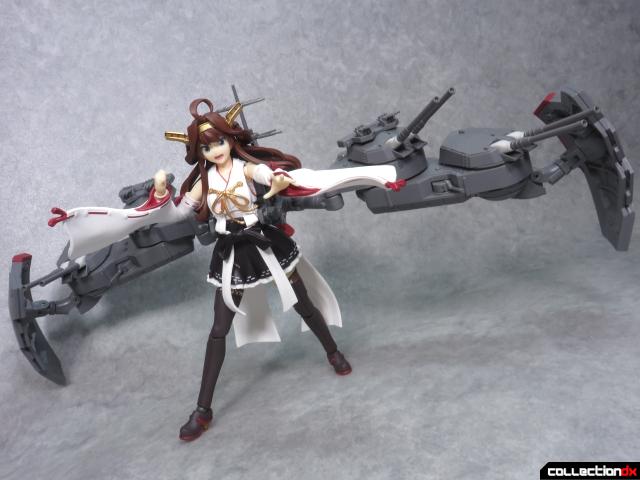 And while it is possible to have Kongo stand up while fully equipped, doing so will test your patience as she isn't exactly stable like this. 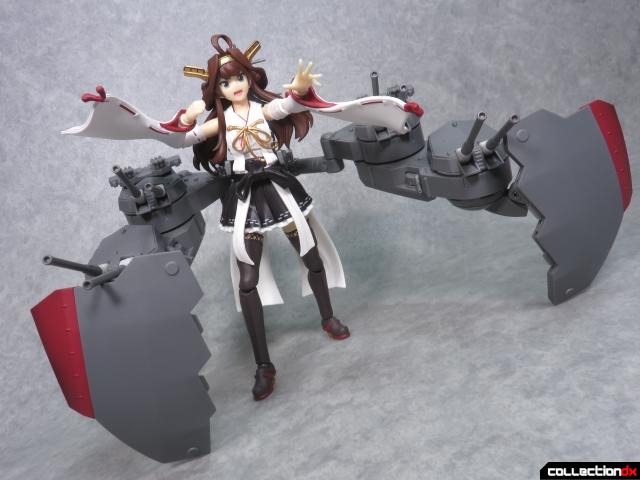 Still, Kongo can plant her feet just enough to swing her rigging into a defensive position. 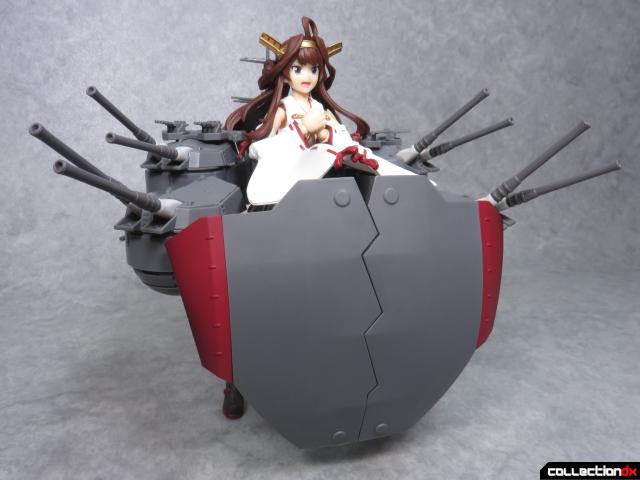 Her shields can lock together to form a solid bow. And yes, Kongo is actually holding the armor plates off the ground (if just barely). 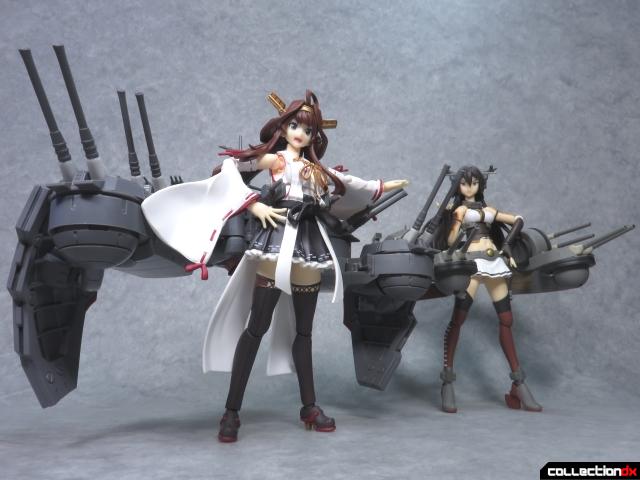 "Kongo, you need to listen to my orders-"

When placed alongside the figma Nagato (a fellow battleship), AGP Kongo's rigging looks pretty oversized. While I am satisfied with Bandai's take on her equipment, I have to wonder how a more "on model" take on a figma Kongo would look. At the very least, it would probably be better at standing without support. 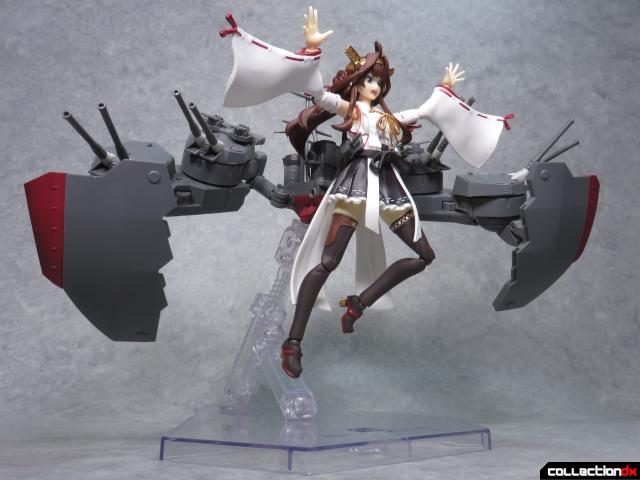 The more sane among us will probably just leave Kongo with her rigging attached to the base. While it can't swivel left or right like a Tamashii Stage, the base's main arm acts like an extendable boom with a small latch to keep it locked at the desired length. 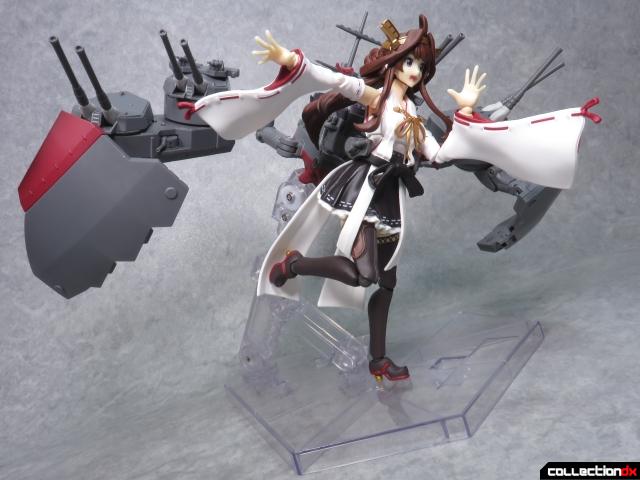 And sometimes you just want to frolic the way the boats do... 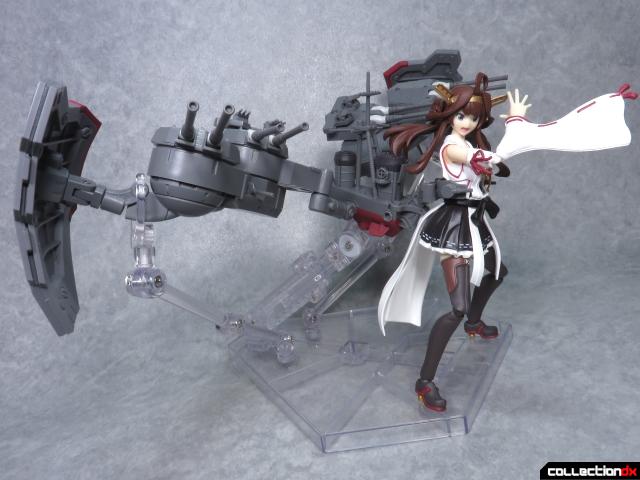 You also get a pair of Tamashii Stage arms to help bear the weight of the hull-halves. However, the joints on the rigging feel pretty robust, so these are more of a safety net in case things start to loosen up after frequent sorties. 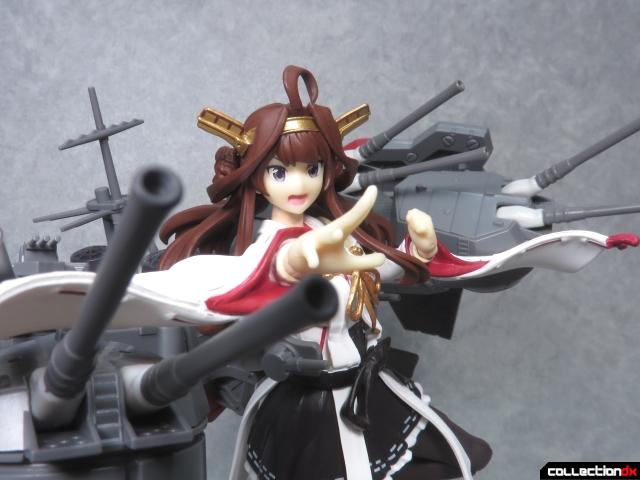 Overall, the Armor Girls Project Kongo is a pretty good toy. The main figure is a great rendition of the character, but suffers a bit from its commitment to fidelity with the somewhat restrictive attire. When attached to her rigging, the toy gains a much needed boost as a complete mecha musume figure. Kongo looks great all kitted out for battle, and is much more playable than her KanColle AGP forebear, Yamato. All that said, the price on this figure (as well as her sister ships) is a bit much for what is essentially a figma-alike. I've come to expect this from Bandai, as Armor Girls Project is more of a niche line, and they always attempt to fill out the price point with large (some may say, excessive and/or over-designed) display stands and weapons arrays. This toy is meant to be a fan pleaser, and I think it does the job respectably.

See you next sortie.

2 comments posted
Do you plan on

Do you plan on getting/reviewing AGP Naka when she comes out?

She's all yours, teitoku.