So where do I start? I'll hold off on my opinions of the Kamen Rider Ghost TV series, as I do not wish to upset myself.

Still, I really love Ghost's design so I snatched up the S.H. Figuarts release to hopefully let something good happen due to Kamen Rider Ghost.

That was a mistake.

Check out the video review then continue on. I elaborate on the issues mentioned in the video.

So, to begin, here's a little backstory. Kamen Rider Ghost is a guy that died so he's a ghost now. He uses souls to transform and get new abilities. Ore Damashii basically just means "My Soul", so this is his base form. 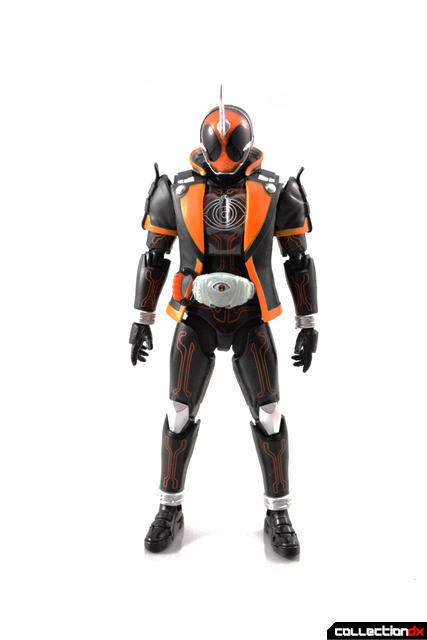 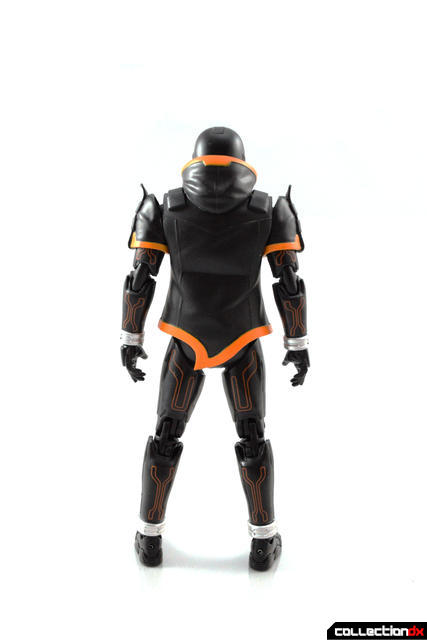 I'll start off with the good things. The design is super slick, and the details look fantastic. The suit is represented well, and Ghost will definitely look great on a shelf. Far away. Where you can't touch it. 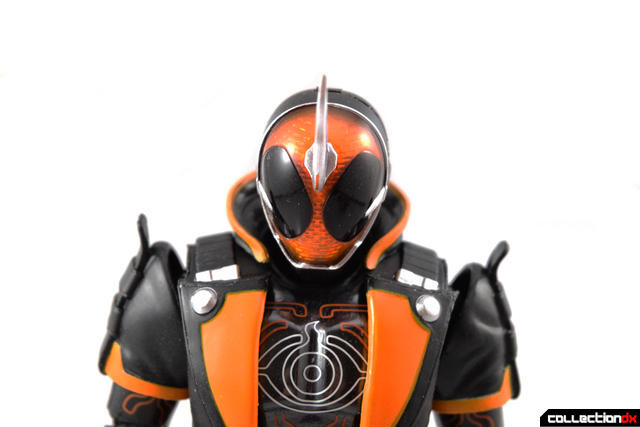 Because holy crap this thing is a nightmare to play with. 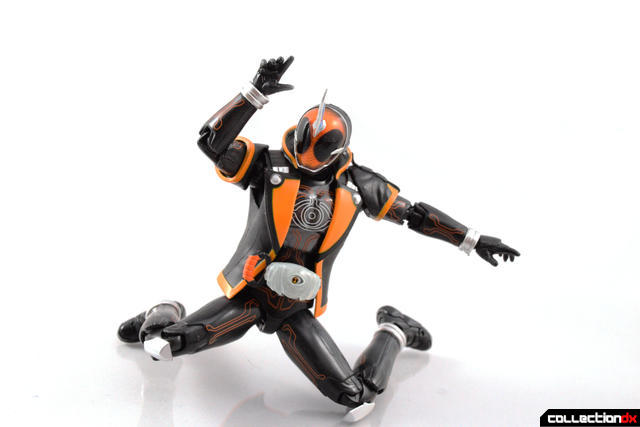 The articulation is a mix between serviceable and terrible. The head articulation is great, the arms are decent, the hips, thighs, and knees are awesome, and everything else is basically garbage. 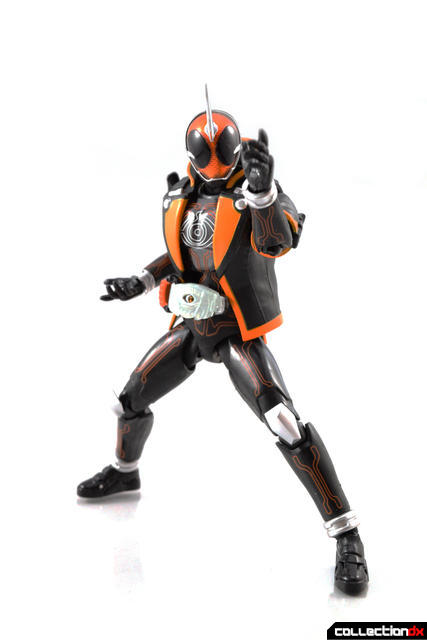 The chest is awful. I can't do ANYTHING with this. His TOTAL forward and backward movement is about a half an inch. 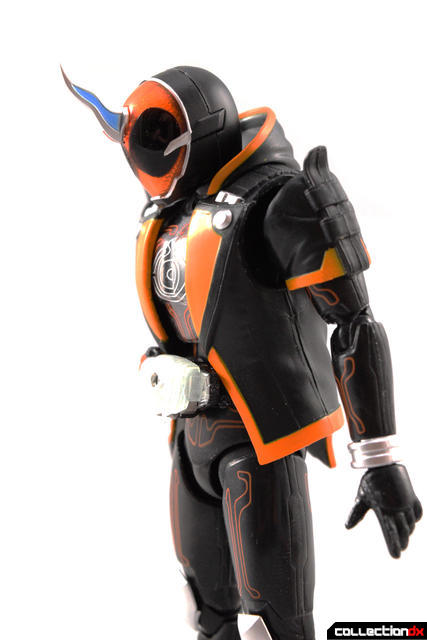 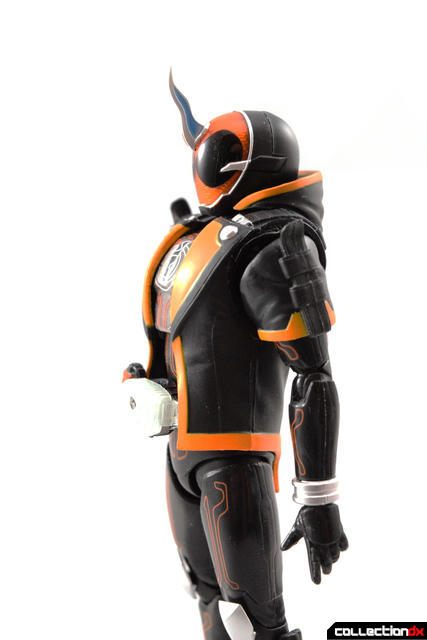 Not only that, but the waist doesn't move left or right at all. You can get a little bit of movement there but it's basically just the chest ball joint moving around. 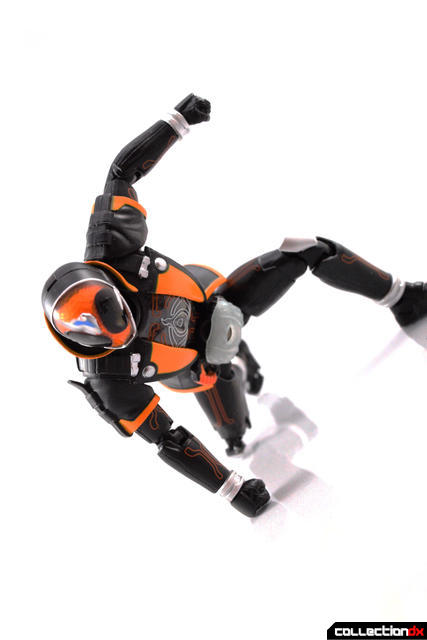 Also, the ankles are awful. The rockers are alright, but the feet cannot really move up and down at all, and this seriously hinders his possible poses. 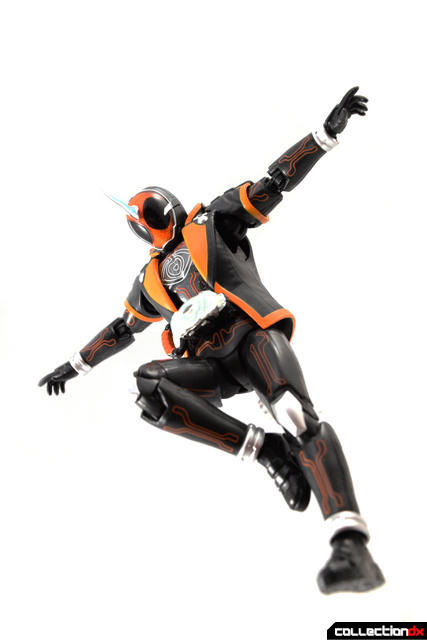 In the time between the video review and the written review, I was able to work in the shoulders so they work much better than I originally thought. Yay. 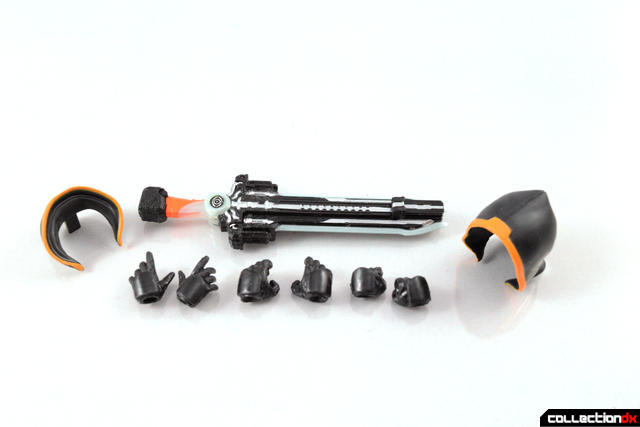 He comes with some good accessories though! He has three sets of hands, two hoods, and the Gan Gun Saber (which transforms into both gun and saber modes). 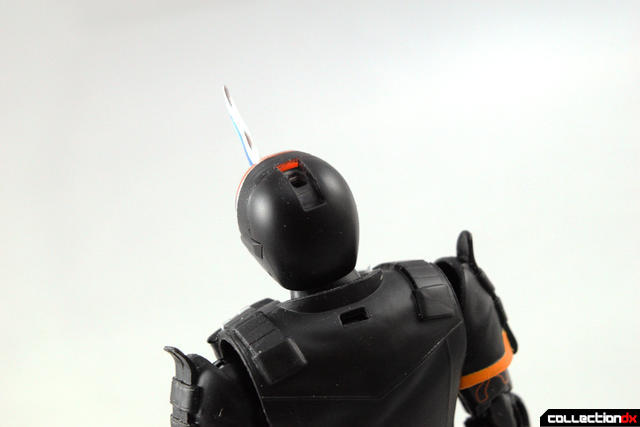 Switching out the hoods is very easy. His head has a removable tab so that you can fit the extended hood on. 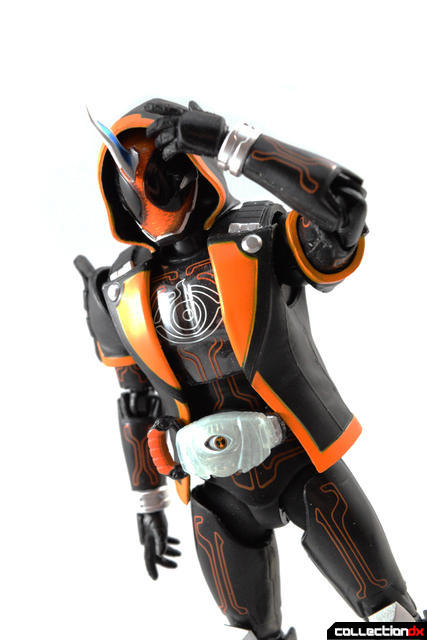 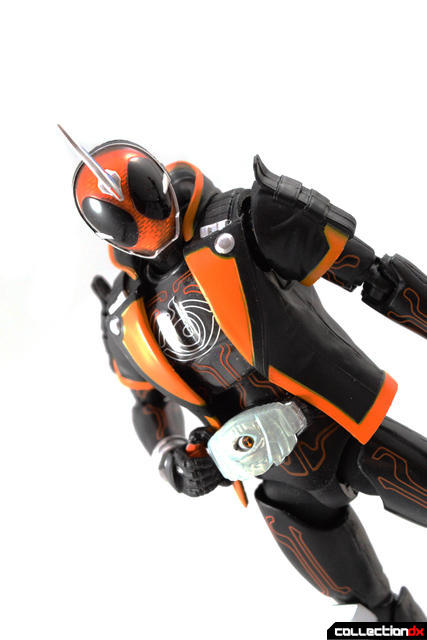 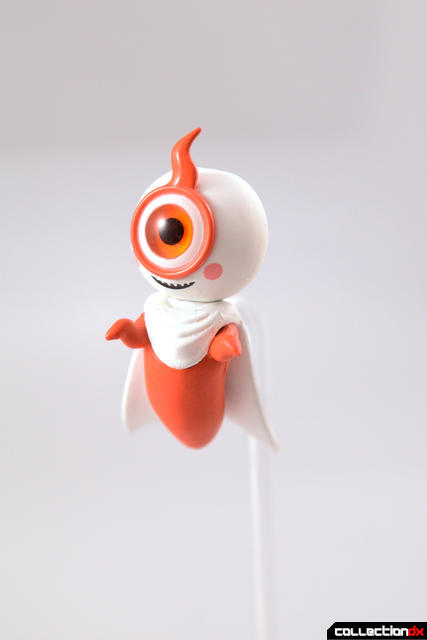 The first release version even comes with a tiny Yurusen. 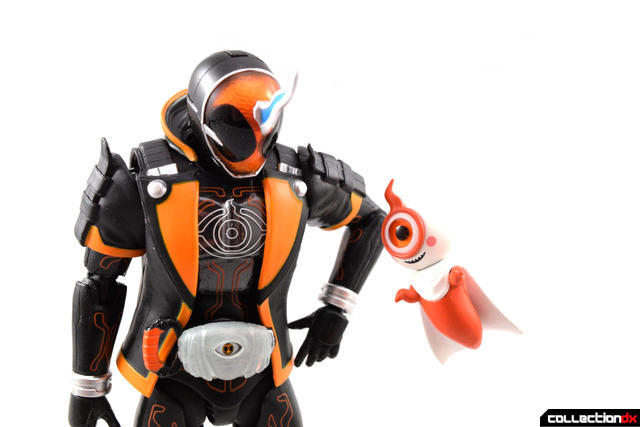 Yurusen is an annoying sock puppet that I hate. But it's cool I guess. 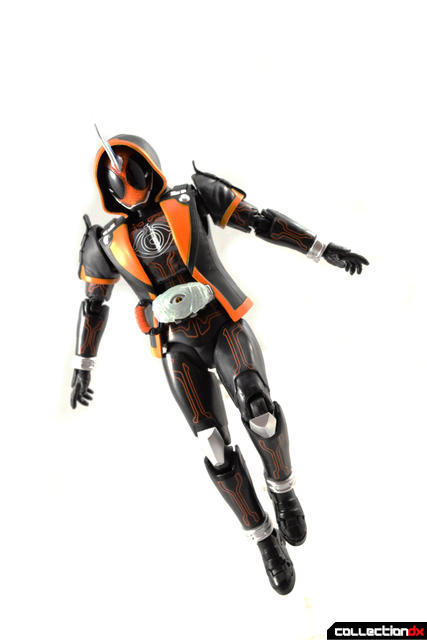 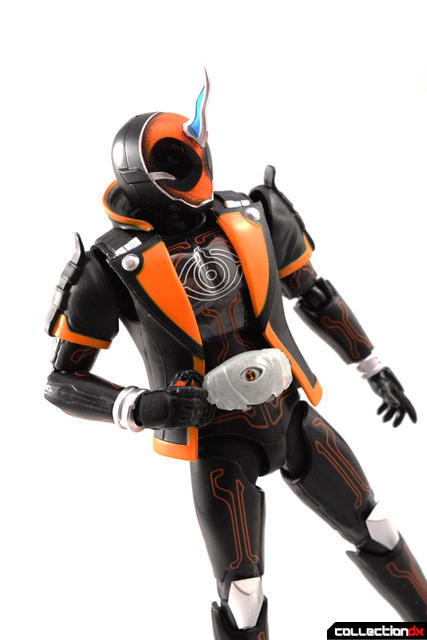 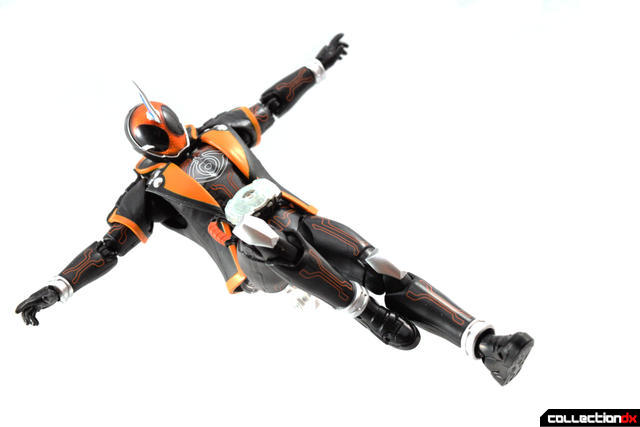 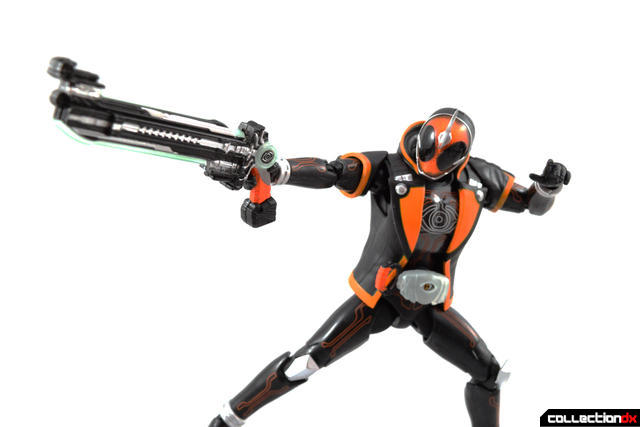 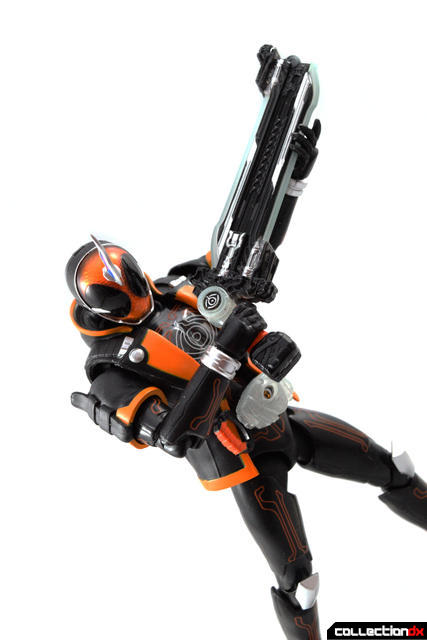 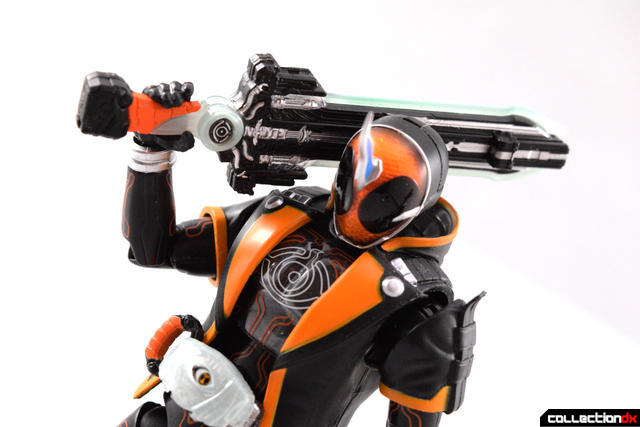 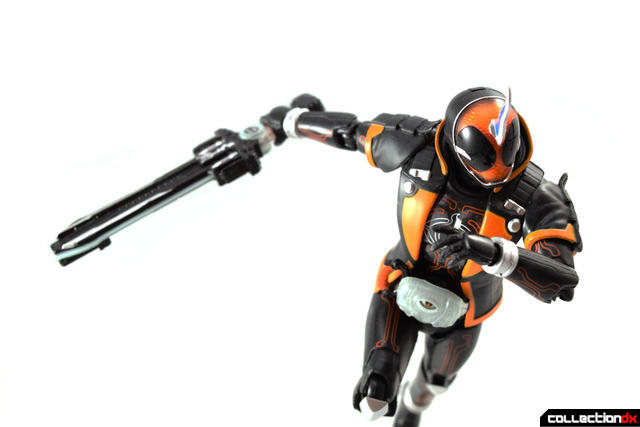 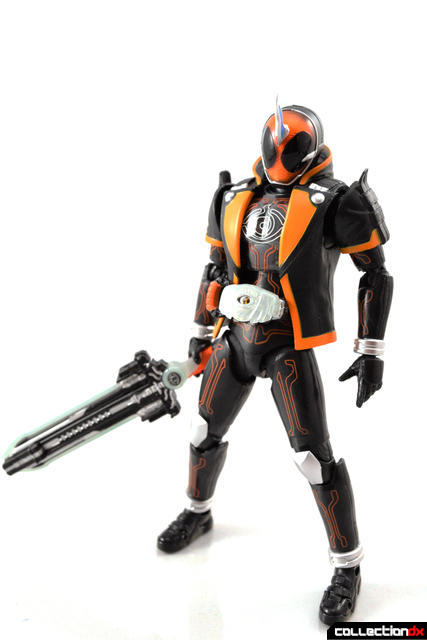 This toy is serviceable, but it pales in comparison to last year's SHF Kamen Rider Drive. I mean, Drive has a freaking TIRE in the middle of his chest and he has almost completely unhindered articulation. 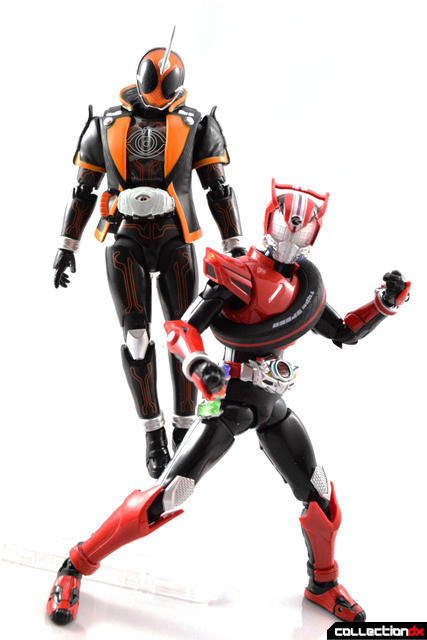 While Ghost isn't the worst S.H. Figuarts release I've ever reviewed, it's far from the best. In fact, it is a massive disappointment.

Not to mention the fact that the toy RATTLES. LOUDLY. There are tiny plastic circles inside the chest to... cover up the arm holes? Whatever. They are loose and make loud rattling noises whenever I tried to touch the figure. In fact, I had to rip the arms off of mine and pry those plastic bits out with a knife to even attempt to pose this guy. I shouldn't have to perform surgery on my "premium" collector's item to make it useable. That is unacceptable.

As such, I cannot recommend this figure. Just get the kid's toy version and forget that they tried to make a premium one. 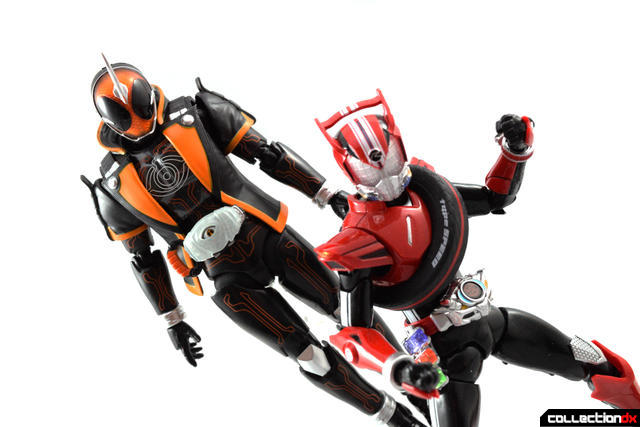 4 comments posted
The only good thing about

The only good thing about ghost is the opening song. By the way, I figured out you can tuck the shoulders into the chest cavity for a bit more range, but I also put him back in the box because he's dead to me.

For a figure you don't recommend, you took some good-looking pictures of it.

I like the figure better than you do, but I'm surprised you didn't dig on the thing that bothers me most: the arms come apart MUCH too easily for my taste. On the upside, it's easy to put them back together, but I didn't *try* to disassemble the arm. It did that on its own when I was trying to execute a pretty deep pose, getting both hands reaching inside the hood to pull it back.

I agree with you on the front-back motion of the feet: I find it a frustrating limitation because it just doesn't seem necessary. I'm not bothered as much by the limited torso articulation, as he can get into just enough of a slouch to replicate his immediate post-henshin pose. (Some time into the series, they established that he slouches forward when the Ore Damashii overtakes him, after which he straightens and lowers the hood.) I can *just about* get his hand properly positioned to push back the hood.

This figure seems to me to fall into a rare category. It's not an all-out disaster like Figuarts OOO TaToBa. Instead, there are elements that are exceptionally well-executed - on par with Drive or Gaim - and some that just aren't (the feet, the hips, elements of the arms.) I don't at all regret purchasing the figure, but I also don't generally try to replicate an Iron Man pose, which would pretty much highlight all of the things you didn't like about the figure.

I'm a little more critical of the accessories in two specific categories. The first - a nitpick - is that they didn't engineer it to allow the naginata formation of the Gan Gun Saber, the way they did with Gaim's Dai Dai Maru and Musou Saber. I assume they did it to keep the handle looking right. My other criticism is that it could've used another pair of characteristic hands, although where'd they'd have fit them in the clamshell is a fair question. (Then again, I almost never pose these figures with the basic fists; those hands always seem like a waste to me.)

Where I can't agree with you is in the Ghost Change figure being preferable. I own it, and I think it's got better-working ankles, but beyond that, the Figuarts version looks and functions better.

From what I've seen, this has been a pretty divisive figure; fans are bound to have differing opinions. I can certainly agree that Ghost (a) should've been better, and (b) isn't nearly as good as Drive Type Speed.

I agree with Jetman. The figure has problems, but it doesn't 'suck'. The torso articulation is limited which is regrettable, but is managed by the little forward back motion you demonstrated in the review and left right motion below the belt. This was tight on my copy of the figure, but once it was unstuck it added a lot of personality to the figure.

On the topic of 'surgery'. I did have to disassemble my figure's arms to get move the jacket enough to sneak in some dish soap and loosen the previously mentioned hip joint. The joint was working fine, just a little stickier than I would have liked. Unfortunately this is something that is pretty common with any engineered product. You get the bad side of a tolerance on two different components that fit together which requires some TLC.

Thirdly, on the topic of the shoulders. You are correct in that those parts that you removed are to cove the joint in wide-armed poses. This is pretty standard for Figuarts and they do tend to rattle (maybe you had an extreme case). You probably can avoid the rattling if you pushed them in. There's a sliding joint that lets the arms either sit flush with the body or have additional clearance to get wider armed poses.

I agree that he isn't the worst. He's just incredibly disappointing. He looks fantastic, but the limited articulation destroyed it in my opinion.

And yes, those rings I removed are for filling in the shoulder joints and torso. Almost every SHF has them, but this is the first time I've had to remove them. I've heard from a few people who have that issue and from those who don't. It seems to be a mixed bag.

I'm not going to berate someone for buying one or wanting one. It just doesn't get my seal of approval.