I’m a pretty big Tatsunoko fan, Casshan being my absolute favorite anime by them. All last year I was watching Tatsunoko classics (and I grew up on a few myself), so when I heard—and saw—that Sentinel was making a line of super articulated and metal infused action figures of Tatsunoko’s paramount heroes. . . I was more than a little excited.

And Hurricane Polymar being the first?
Sign me up!

My excitement, sadly, was somewhat misplaced as Sentinel’s first foray into its Tatsunoko Heroes FightinGear line is, well. . . not too good.

Before the bad, though, the good, namely just how sweet this figure looks: 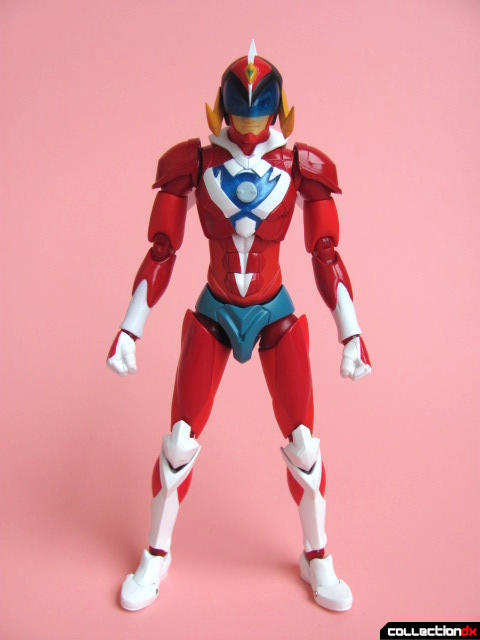 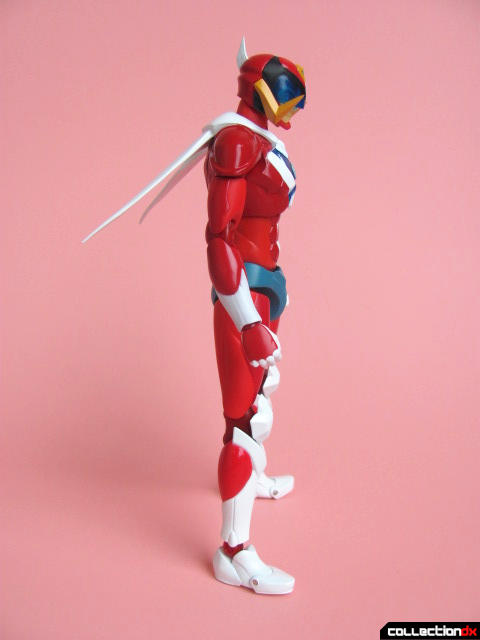 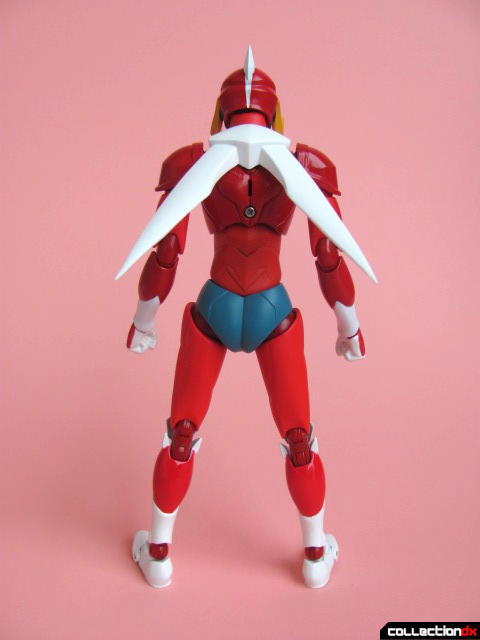 The first thing to notice about this figure is that it is not the original 1974 Polymar and neither is it the rather “gritty” Holy Blood Polymar, but instead a new take on the classic design by Hiroyuki Komatsubara (studio RECKLESS). It certainly tries to be the smoother, less fierce Polymar from ’74 but with a sharper and more armored look overall. I prefer the classic “jump suit” look but a nice update for sure: 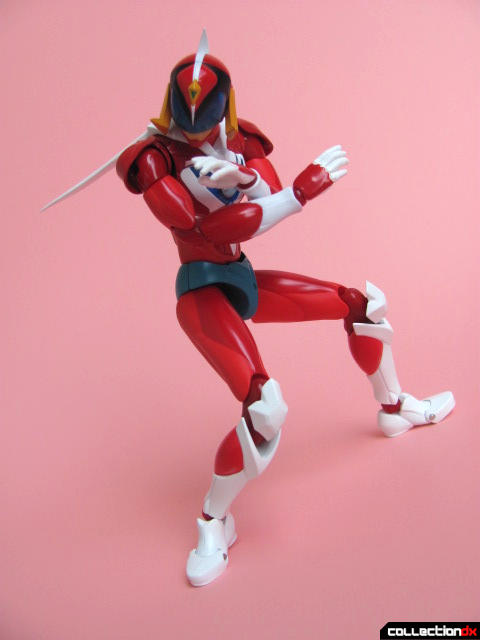 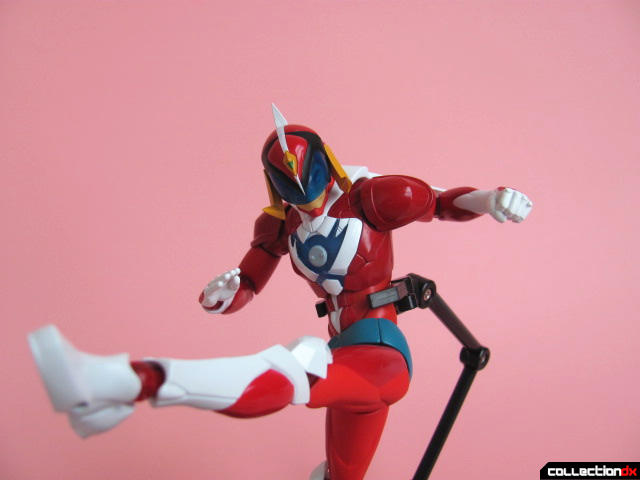 The sculpt—besides being new—is littered with muscular detail, most notably on the legs. Polymar also sports grooves and raised detail all over his suit giving it great presence. The sculpt is purposeful and direct. 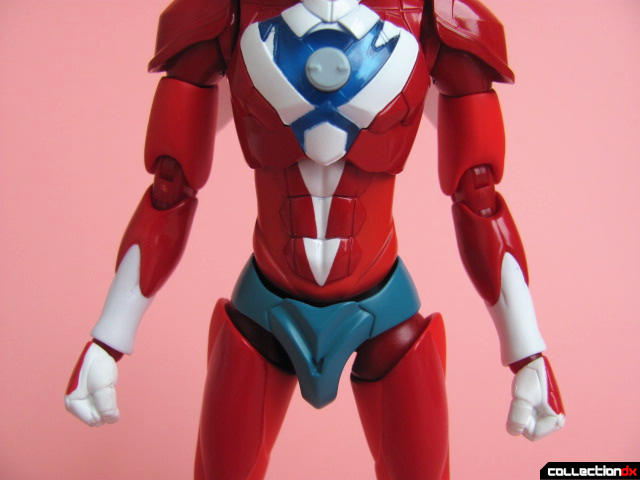 One thing to praise this toy for is getting the likeness of Yoroi Takeshi—Polymar’s alter ego—down to a T; Sentinel really put effort into his face: 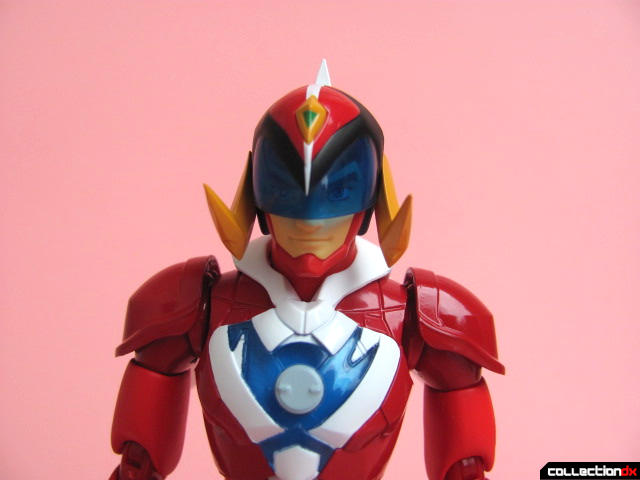 Now we start getting into the less than ideal qualities of the figure, starting with the paint. Polymar has both unpainted and painted pieces of his construction; this—I would assume—is to give him a more dynamic look. This is actually kinda nice, this blend of matte and shiny coming together; what isn’t nice, however, is how poorly the paint is applied. The edges where paints end and start is just plain sloppy; for a ¥8400 figure I expected much better than this: 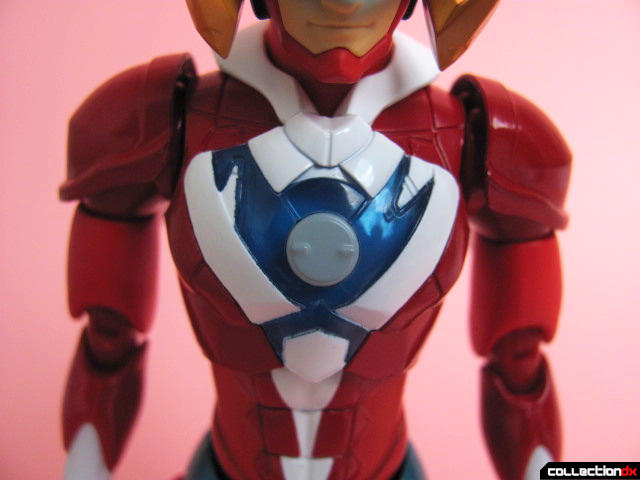 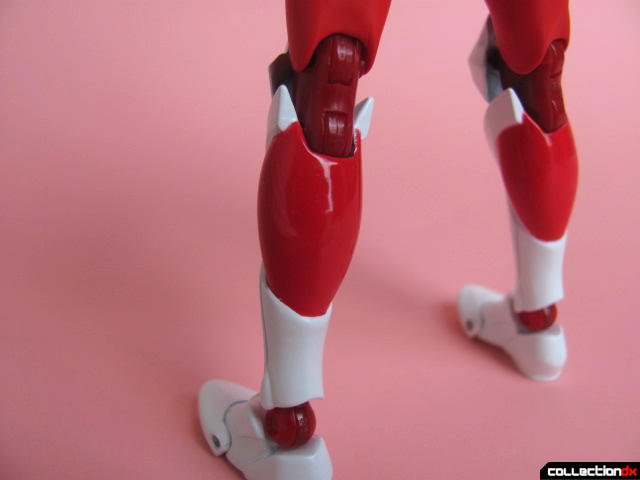 Between the white and red there are also parts where they have bled together. It’s not evident from normal viewing distance like on a desk or shelf, but that’s poor excuse for poor paint.

Nextly we have articulation and this is where Sentinel drops the ball in the worst way. The shoulder pads are connected via a ring around the shoulder joint itself so vertical movement there is restricted; the elbows are double jointed but his upper and lower arm aren’t cut deep enough thus effectively making them single joints. 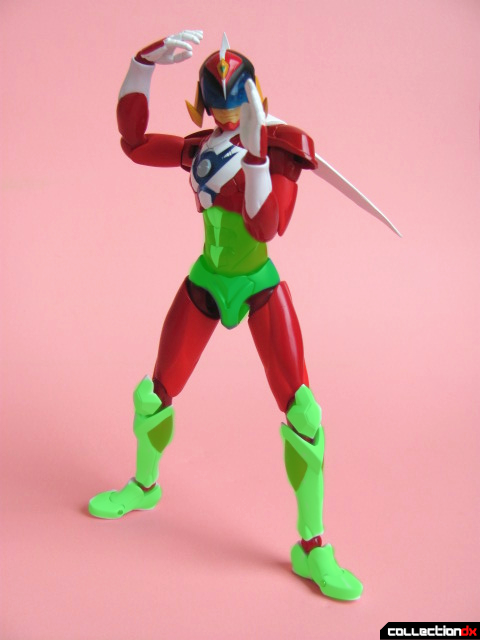 And the worst joints are the ankles and waist; I would not feel bad calling them trash. These joints are so weak that posing is a nightmare. It’s like the diecast of this figure (and there is a LOT of it [which is nice in general (but not here)]) was an afterthought and none of the joints—even the most important ones—were engineered to hold all that weight (something I’ll get back to later).
Ankles are floppy and the waist is useless.
And don’t even get me started on the exposed pin in the toe joint. . . 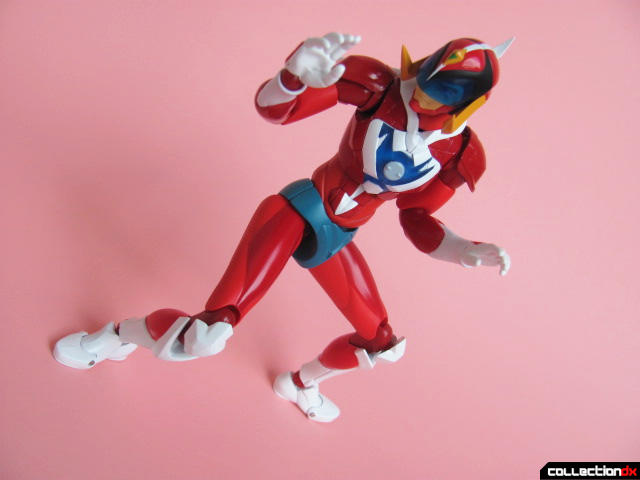 On the flipside, though, the hips are effective and the knees—though a tad bit ugly—are some of the most mobile ones I’ve ever seen, what with almost making 180° easy. 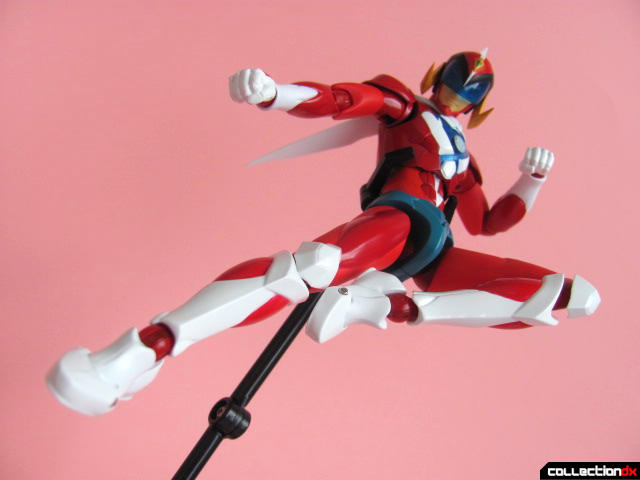 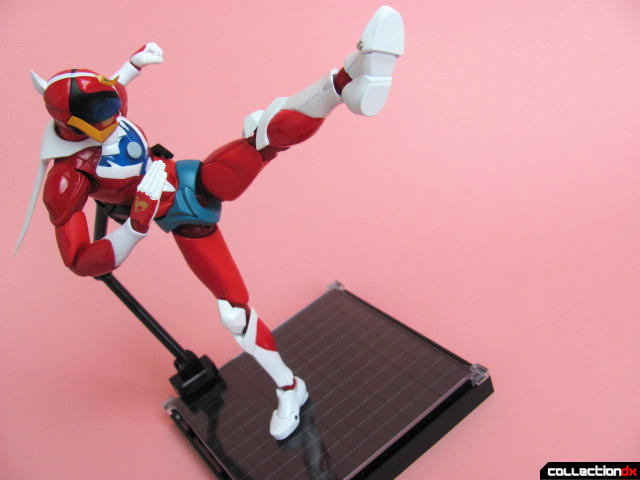 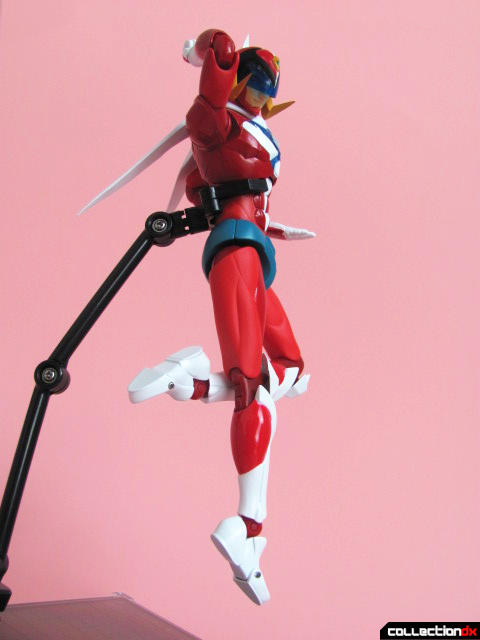 Polymar comes with a few accessories:
- 4 pairs of hands (6 total)
- A stand 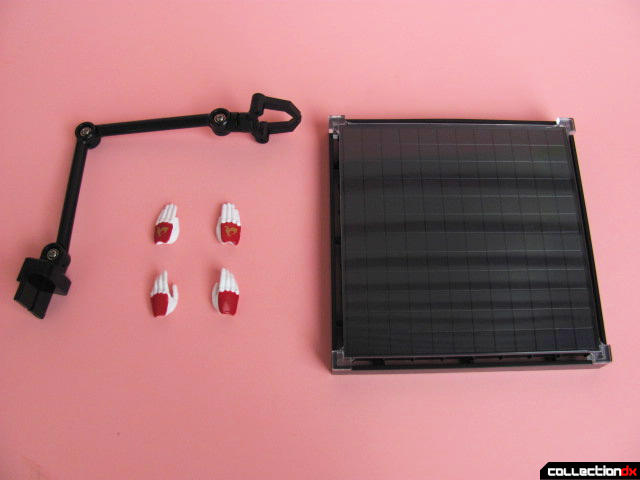 The hands exchange easily enough and the two karate chop hands come with Polymar’s signature glowing Hurricane Mark. The stand is functional and dynamic; a peg system instead of a clasp would have been much appreciated, however, as Polymar is too heavy to use it effectively. 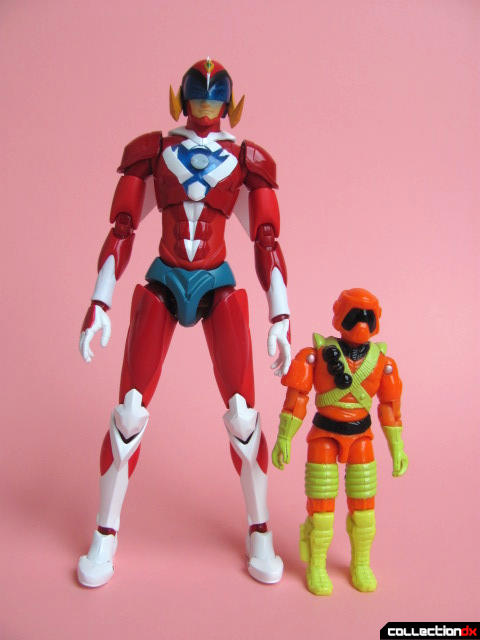 There are a few things I feel this figure would have benefited from, some that are—in my opinion—inexcusably omitted. Firstly, even a single interchangeable face would have given so much to this figure. Takeshi as Polymar is hardly a straight faced, smirking kind of fighter: 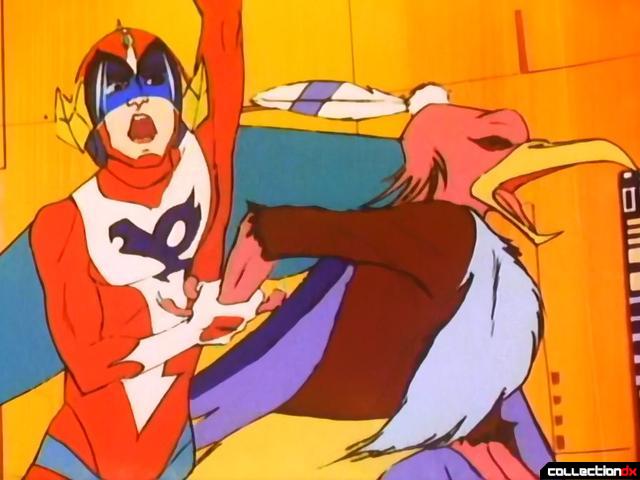 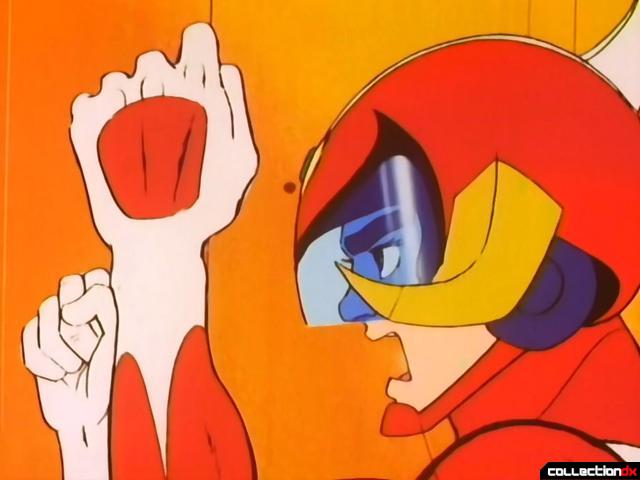 Only having a nigh-neutral face removes so much expressiveness from this figure thus making it not only flat but a bad portrayal of Hurricane Polymar, to be honest.

Secondly, the hands (and this is a two parter)
First, only the karate chop hands come with a Hurricane Mark; this is odd because in the show the Mark usually shows up on a closed fist. I would have also appreciated every pair of hands having an alternate with and without the Mark to make for a more fully rounded figure.

Second—and this was what I was referring to being inexcusable—is the lack of splayed hands for Polymar. Polymar’s fighting style is open palm and splayed finger: 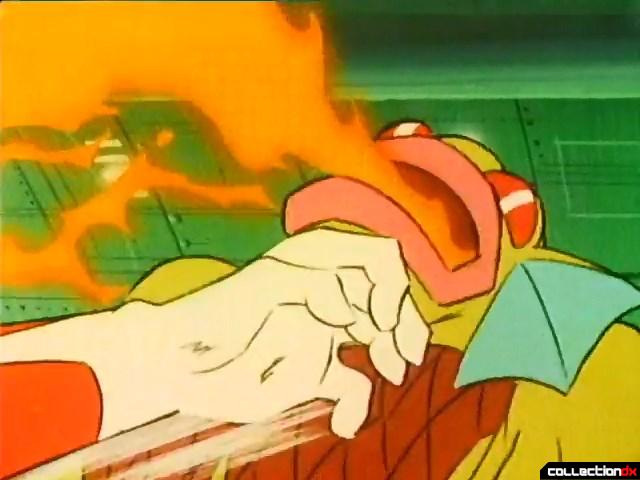 Not giving him these hands is akin to not giving a hypothetical Spock figma a “live long and prosper” hand. If this sounds like an overreaction you may be right, but this figure just feels so impersonal (same for what we've seen for Casshan); a common accessory mold just doesn’t cut it. 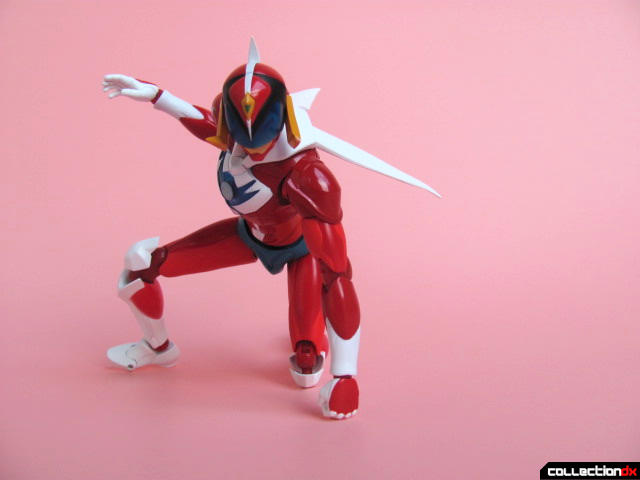 Polymar also sports a light-up gimmick which is pretty neat. A simple flick of a hidden switch on his back and: 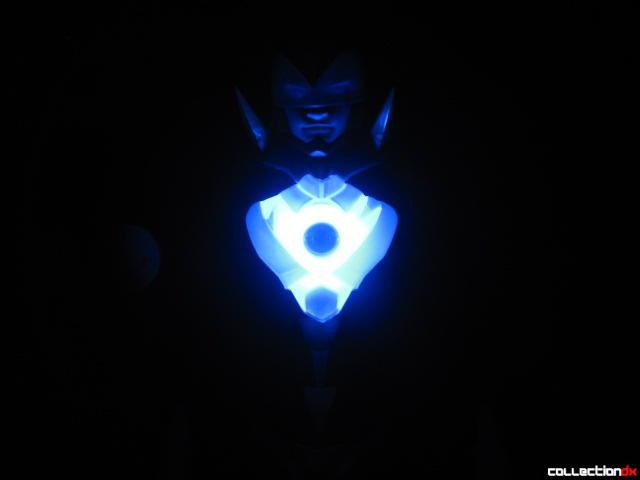 This is cool because in the show Polymar’s chest does light up (thought I think only for cinematic effect). Nice touch to the figure but somewhat unneeded. 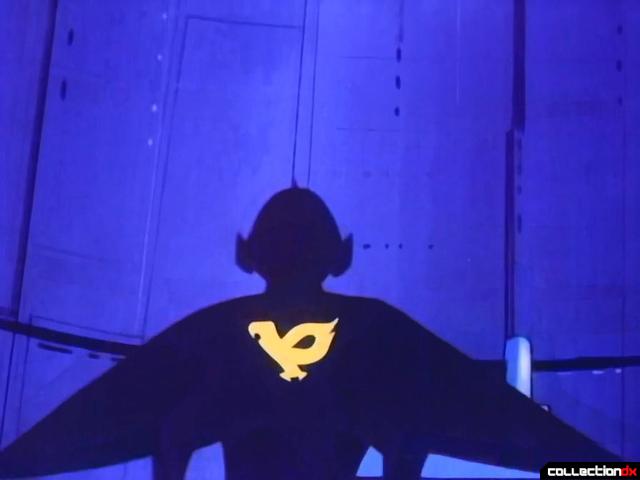 This leads me into my final point about this figure: the paint is rough, the articulation is trash in some areas, and the accessories do not portray the character of the character because of capital being sinked on the diecast and the light-up gimmick department. Instead of prioritizing funds on personalizing the character, making sure the joints can hold the figure’s weight, engineering, paint, and overall quality it was used for metal and a light up gimmick. And the toy suffered because of that.

In conclusion, Sentinel needs to go back to the drawing board for this line. With Casshan already coming out and Gatchaman in the works it’s prolly not gonna happen, but we can hope they will get better over time. I’m used to hearing about mind-blowing toys from Sentinel (like their Riobots and Giant Gorg). But this figure just blows.

At full price I cannot recommend this toy.
From both an extreme fan point of view and a regular consumer of toys one, this figure is disappointing. I wanted to love it but sadly I can’t. 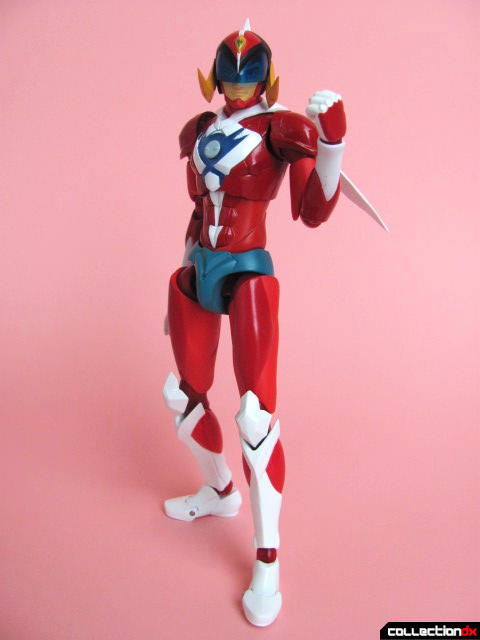 4 comments posted
Shame about this one. Good

Shame about this one. Good review though!

Yeah, it's a shame, doubly so since I was excited for it.
Sentinel feels like it's testing the waters with Polymar so I would assume when the Gatchaman ones come out--since they are probably being bet on being big sellers (since the only thing anyone ever seems to care about is Gatchaman)--they'll be better. Here's hoping, at least.

And thanks for that, Josh.

Is it too much to hope that they'll make one of these for Karas, my favorite underappreciated Tatsunoko character? He's been in need of a figure for a while and I'd be willing to grab one so long as the quality control is improved.

Karas and The SoulTaker are the ones I'm hoping get made, so you're not alone there. I don't think it's too much to hope for Karas to be made simply because there aren't a whole lot of heroes that would honestly fit the aesthetic of this line, having jumpsuits to be armored or having armor already.

It just might take a while since this line starts in the 70s and will prolly progress from there; other than the wait I think there's a pretty good shot for a Karas.

In the meantime, Karas did get a figure from Max Factory; could be worth checking out.