By now, most Gundam fans probably know the origins of the design; coming from Tomino’s novel Mobile Suit Gundam: Char's Counterattack - Beltorchika's Children, the Hi-Nu acts as Amuro’s trademark mobile suit. For what seemed like decades, the Hi-Nu was this mythical design that never got a proper release in model or toy form, yet we’ve somehow reached a point where there are arguably too many Hi-Nu Gundams available. 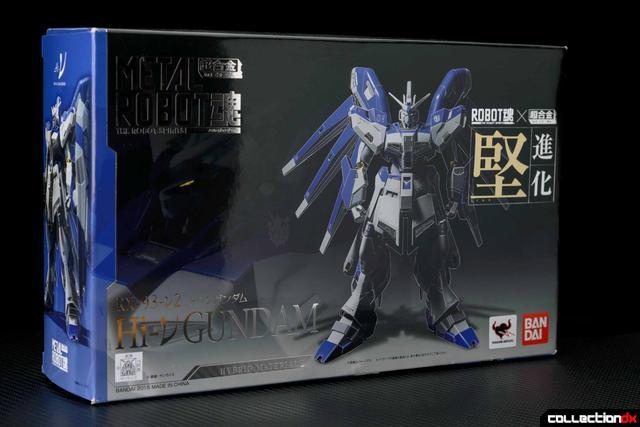 The Hi-Nu Gundam comes in quite a large box for a Robot Damashii and is designed to resemble the Metal Build packaging. 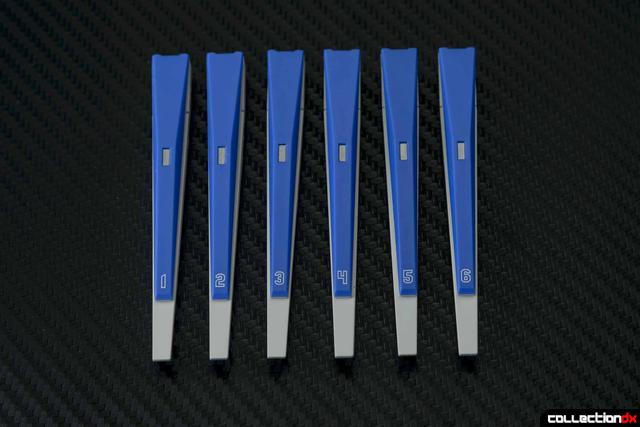 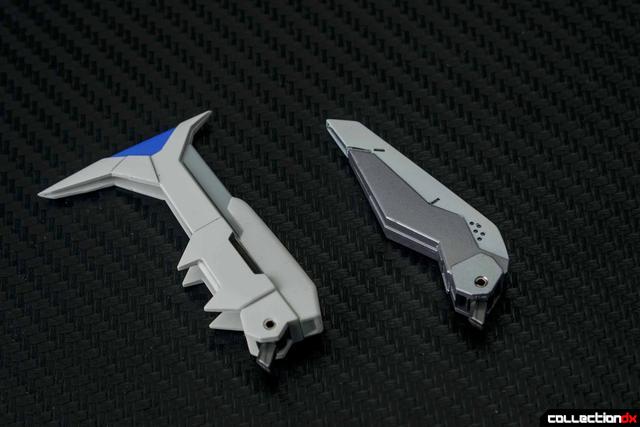 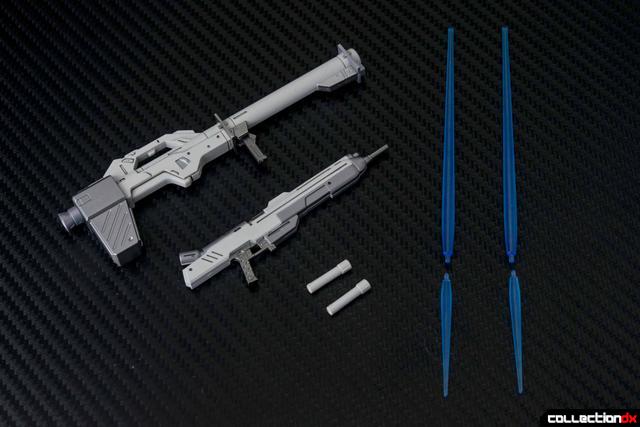 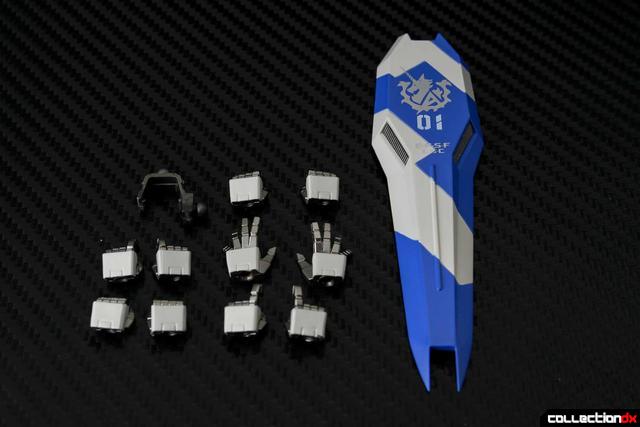 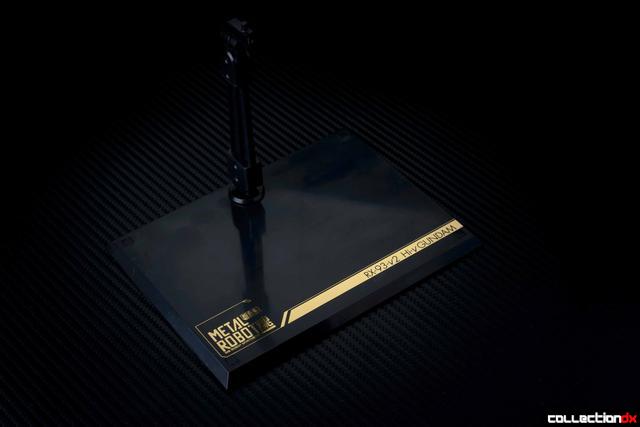 Included are quite a lot of accessories, taking up 3 trays. There are 5 pairs of hands, shield, beam rifle, New Hyper Bazooka, 6 Fin Funnels, two beam sabers, 2 sets of long and short beam saber effects, and a large display stand. The Fin Funnels are painted and numbered from 1 to 6 while the stand has really nice looking gold foil printing. Two types of backpack binders are also included to allow you to display the figure in the more classic or modern Katoki style. What is not included however, are the Fin Funnel beam effect parts that came with the regular release, allowing you to display them detached from the binders. Considering the increased price of the figure, it’s the type of dick move I’ve come to expect and rather infuriating. Considering how iconic the image of Fin Funnels flying around the Nu-Gundam are, it’s really disappointing that Bandai would not provide the parts necessary for such a premium figure. The included stand is actually really useful since the Fin Funnels make the figure very back heavy and difficult to stand without support. 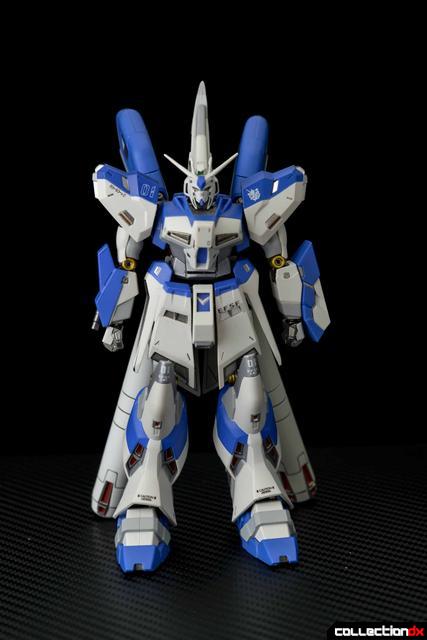 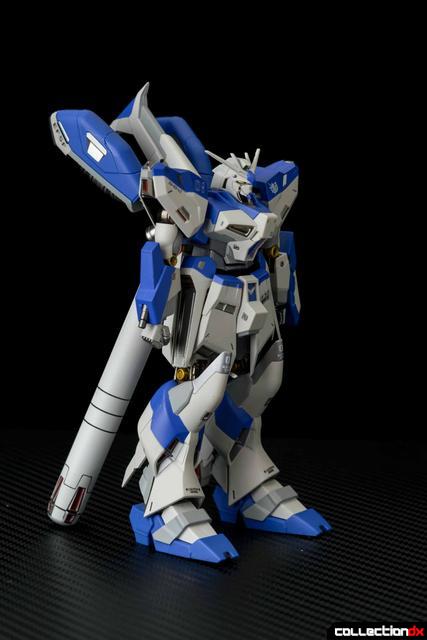 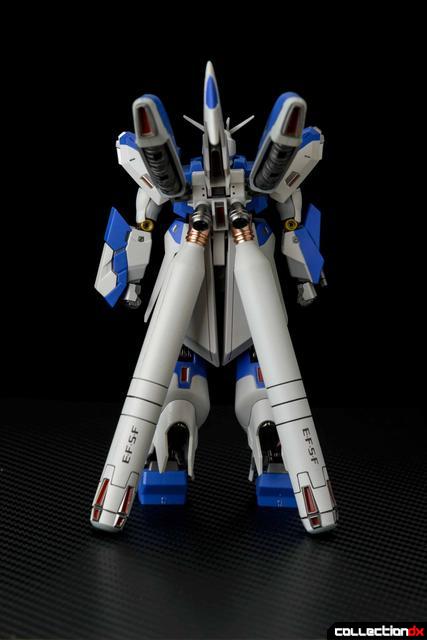 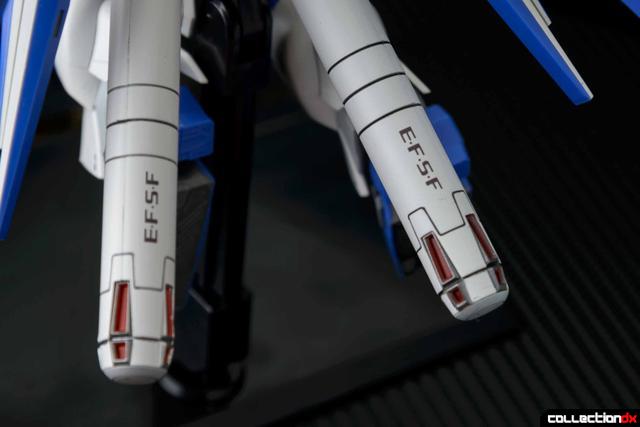 While not explicitly stated, this version of the Hi-Nu seems most closely to the current Katoki design. Comparing it to Veef’s review, the figure itself seems identical to the Robot Damashii version except for the metal joints internal frame and paint applications.  The paint applications are really great, with lots of detailing and marking all around the figure. The quality of the figure really makes it feel like a scaled down Metal Build figure. Articulation is ok, but the large skirt, fuel tanks, bind and attached Fin Funnels do tend to get in the way. The beam rifle is also not fixed and the figure has problems holding the rifle flush to the arms. The best way I’ve found is to have the hands diagonal to surface of the arm in order to hold the rifle straight. 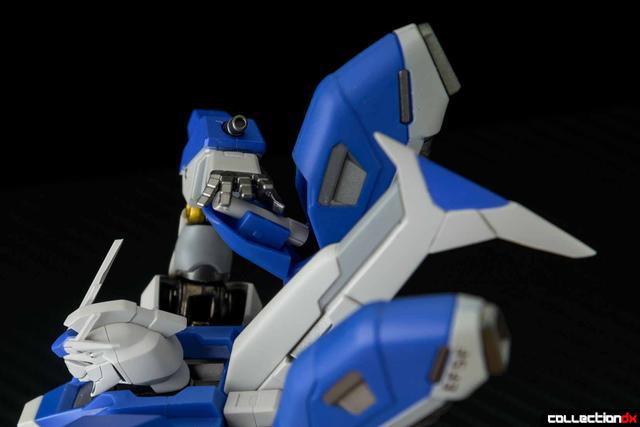 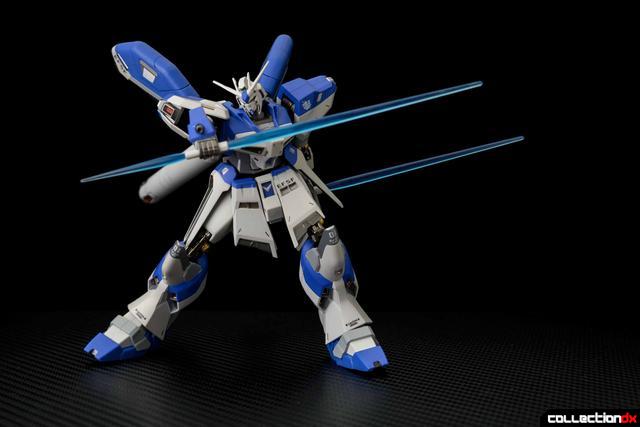 The beam sabers are still stored in the binders and booster pods and the saber itself also emits a beam dagger from the pommel much like the original Nu Gundam’s large beam saber. 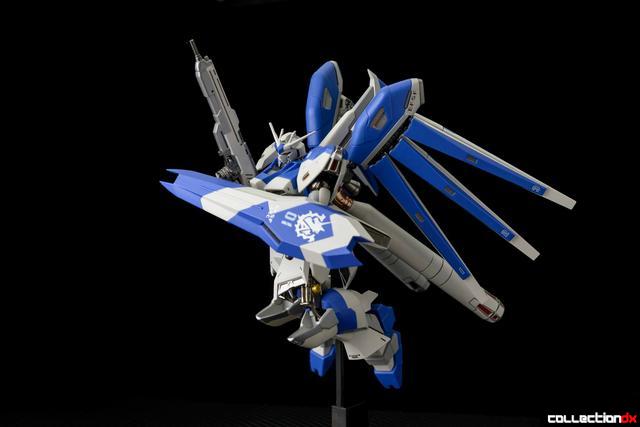 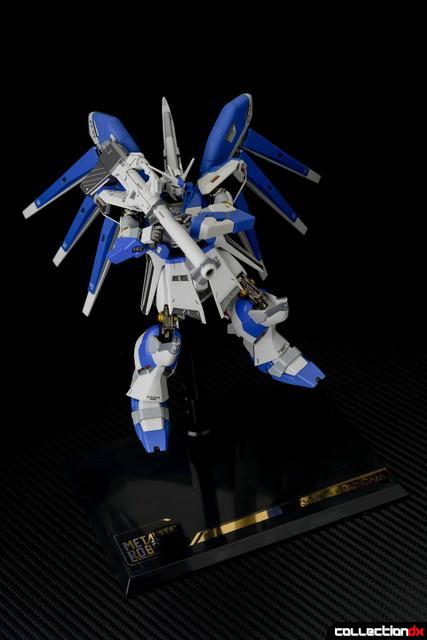 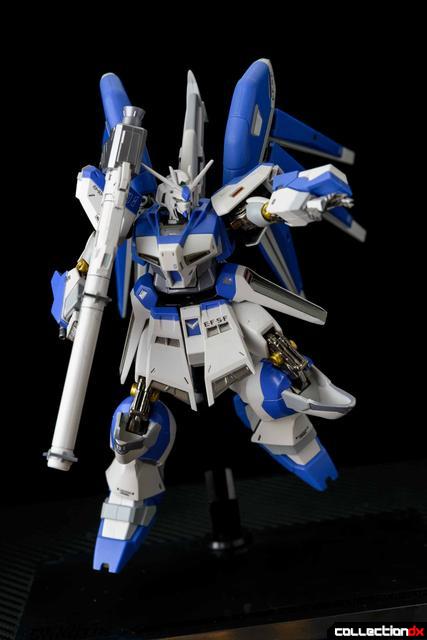 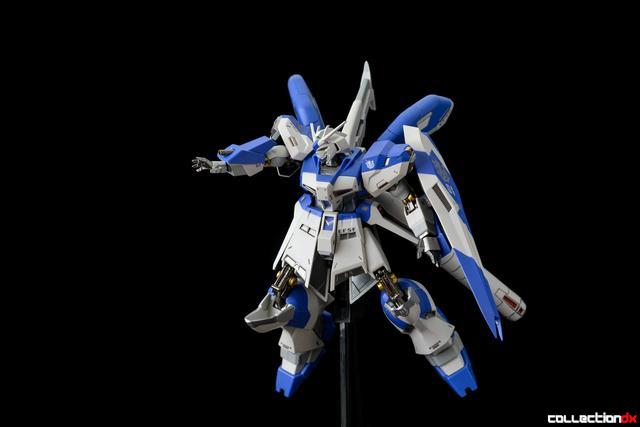 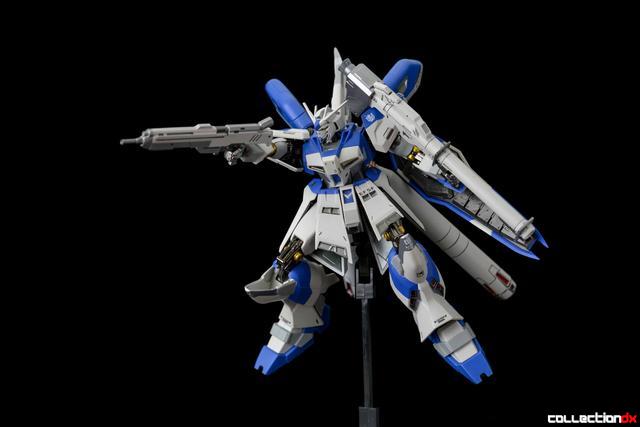 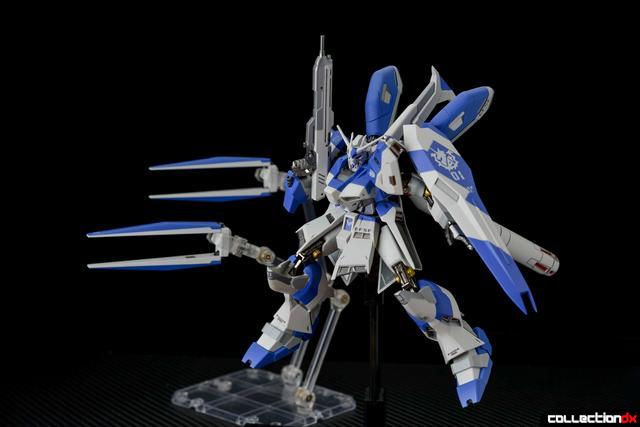 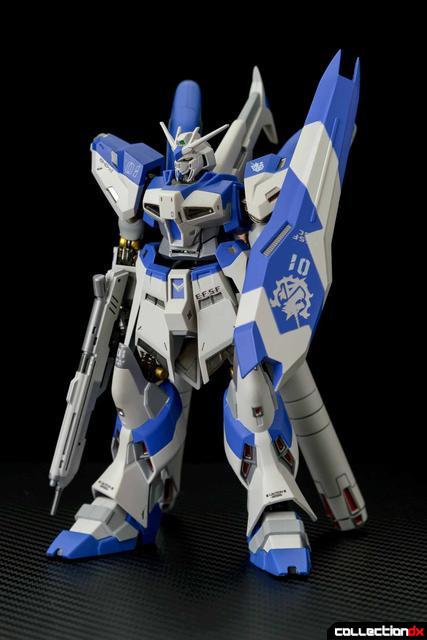 As a figure itself, I really enjoy the Metal Robot Damashii Hi-Nu Gundam. The finish and quality are excellent, but the exclusion of the Fin Funnel effect parts is still incredibly annoying. It’s not quite a deal breaker, but it’s something that you should know going into this. At around 90 dollars, it’s pretty expensive for such a small figure, and really confuses me. On one hand, I love the paint applications and this is exactly what I have always wanted in the Robot Damashii line. I’ve also considered the RD line to be the robot equivalent to Figuarts, yet they’ve never felt like they were made to the same standards. While most Figuarts have great paint applications and detailing, the RDs just felt like unpainted 1/144 model kits. The Metal RD changes all this with its awesome finish, but it also brings to question: What is the point of it? For such a small and expensive figure, I’d much rather spend more and get an actual Metal Build of the Hi-Nu Gundam. For RD collectors, this is also significantly more expensive than most other figures. The Metal RD Hi-Nu just seems like a figure that doesn’t have a target audience. It’s a really great figure, but I wouldn’t quite justify the full price. If you don’t already have the standard version and can find this on sale, I would highly recommend it but don’t go into it expecting Bandai to continue the series.

Awesome review. the figure looks incredible, but I think you have your designers backwards. It's really closer to Izabuchi's design when you look at the face. Katoki's MG "Version KA" has a more recessed face, but the proportions are almost equal. The only thing that's off is the Fin Funnels don't have the 'airbrushed' stripes and are solid color (which is really what I want to do with my MG V.Ka)

For the first Metal Damashi We've not heard any follow up to this yet have we?

Pretty sure the line is dead, its been over a year since the last release and nothing was even 'display only' at tamashii nations. Its really cool, but just doesn't feel like it has a place in Bandai's lineup.

To clear the confusion here, the original 'fat' purple Hi-Nu was designed by Yutaka Izubuchi. The one with striped Fin Funnel and beak-shaped backpack. Then years later Izubuchi himself redesign Hi-Nu into blue-ish slimmer version with simpler, fin-shaped backpack seen as option in this figure for the first Master Grade kit.
Then recently Bandai released MG ver Ka of Hi-Nu but contrast to Katoki style of making things sleek and slim he went back to old fat Hi-Nu, complete with that beak backpack, purple color, and striped fin funnels.
So when you said "more classic or modern Katoki style" it should have been just "classic and modern style" because both are Izubuchi's and MG ver.Ka is pretty much Katoki trying to bring back old design.