This figure was provided by HobbyLink Japan.

The late 70’s to the mid-80’s were the golden age of the combining robot. Many such as Combattler V, Golion (Lion Voltron), and Dairugger XV (Vehicle Voltron) would helm from this era. One such robot was God Sigma. 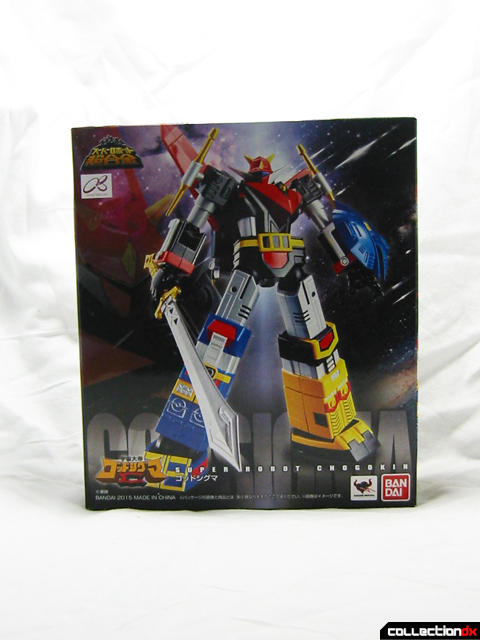 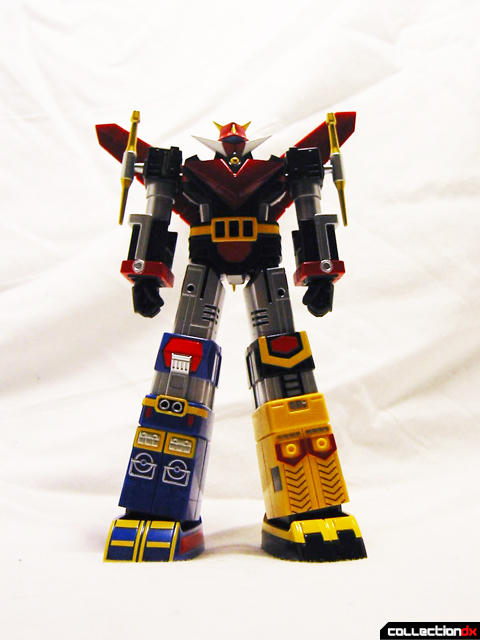 This toy however, isn’t a combiner. Since this toy doesn’t turn into it’s separate components like its large SOC version, it’s a bit more stylized, especially around the legs that taper off into a trapezoidal shape rather than just straight down. 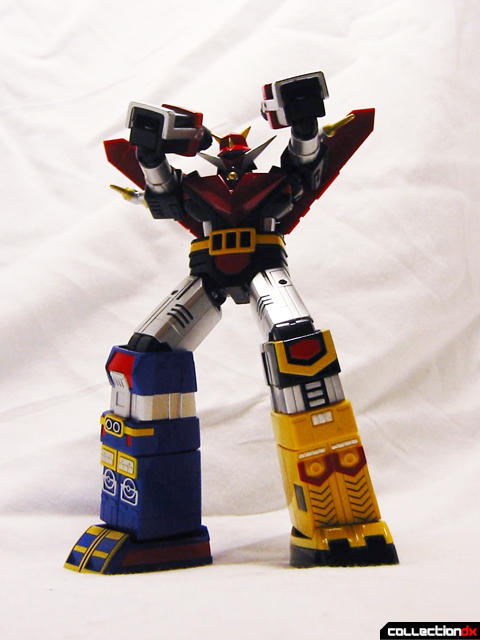 Standing five inches, it is, however, very articulated. While being a very blocky design, it’s able to do all sorts of crazy poses. Shoulders can swing upwards, elbows are double jointed and detented. Even the shoulder rods can swing around (but aren’t removable like on the original ST Chogokin). 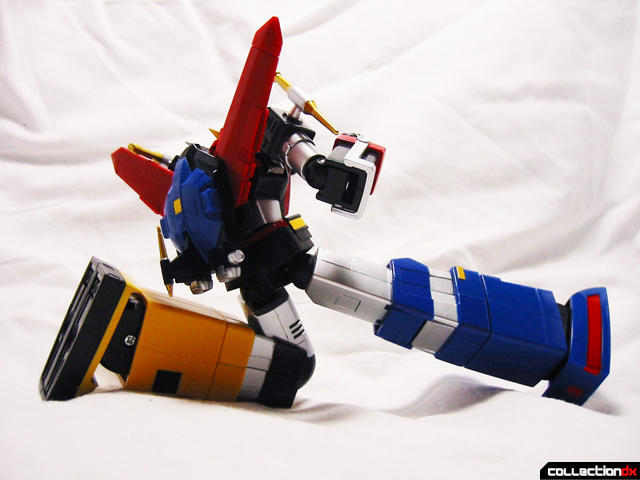 Knees can bend further in thanks to the collapsing panel in the back although on mine it gets a bit stuck on the blue leg, so I have to manually push it in with a tool. The hips do have a swingable bar, but I wish they could make the legs go higher. The feet get a bit more movable when you pull down the ankle. It can rock forward to back as well as side to side (although not much). 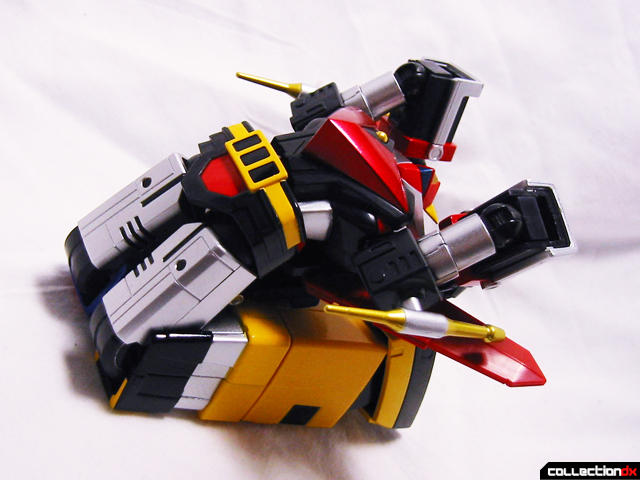 Check out that sexy ab crunch. 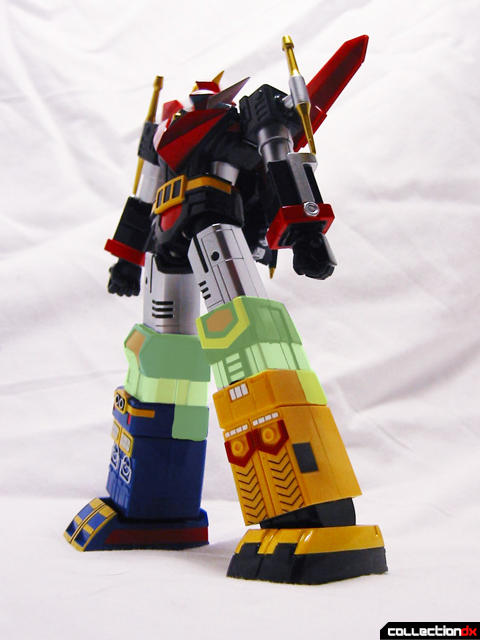 Since this is in the Chogokin label, you’d expect a decent amount of diecast. Really though, other than the shoulder and the swingable hip joints, the only major diecast content is the upper part of the lower legs (which I have highlighted here). It adds a little bit of weight, but not much. I would have prefer just a bit more especially for the price this goes for (7500 yen). 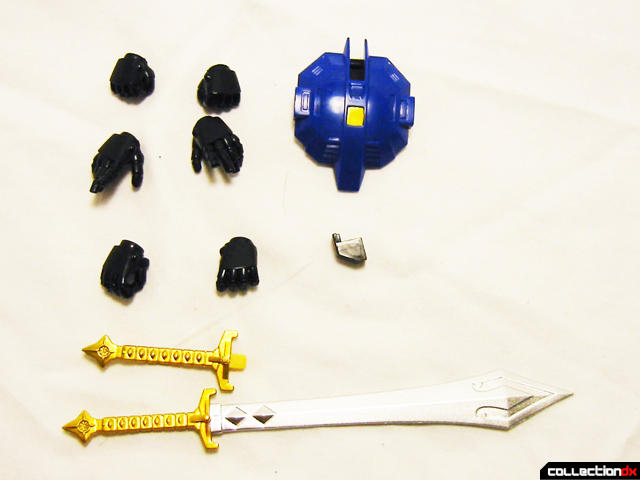 Accessories are minimal but satisfactory. Three pairs of hands (closed fist, open palm and sword holding hands). Along with that is the sword, sword handle, shield, and attachment for stand. 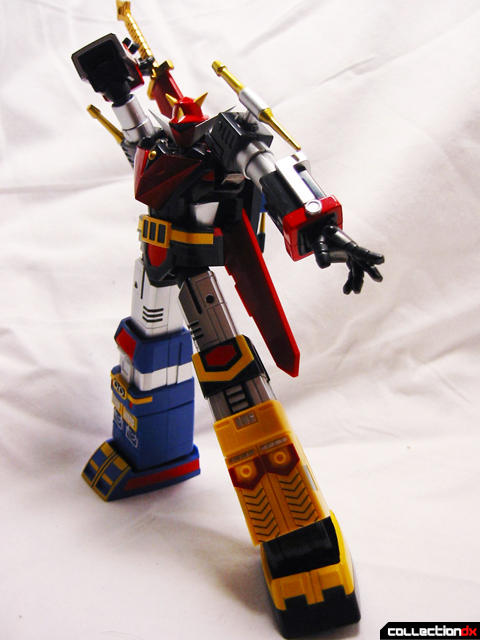 There’s a little piece of that comes off the wing, so the sword handle can fit in so it looks like it’s pulling it out. 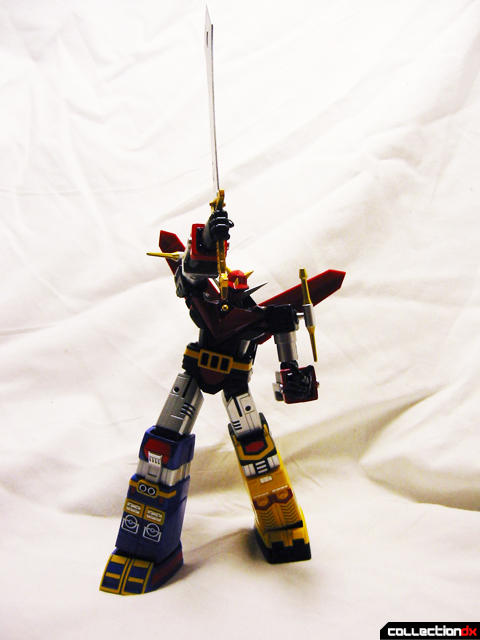 As for the sword itself which is called the Musou-Ken (Peerless Blade) it’s a bit of a struggle to get it in the hand so I wouldn’t recommend taking it out once it’s in there. Still it’s cool to have both hands hold it since the hilt is long enough. 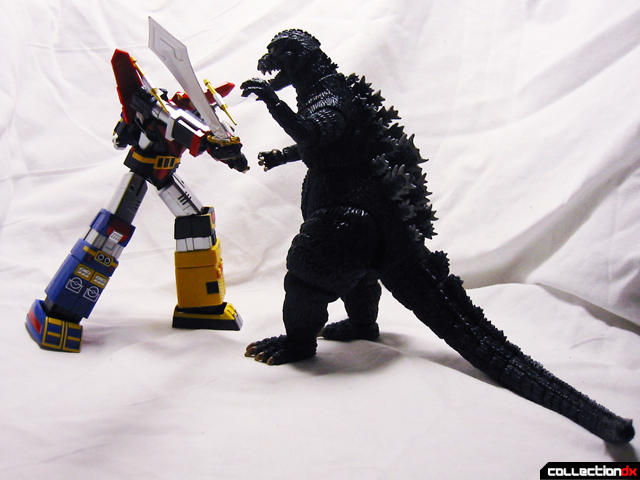 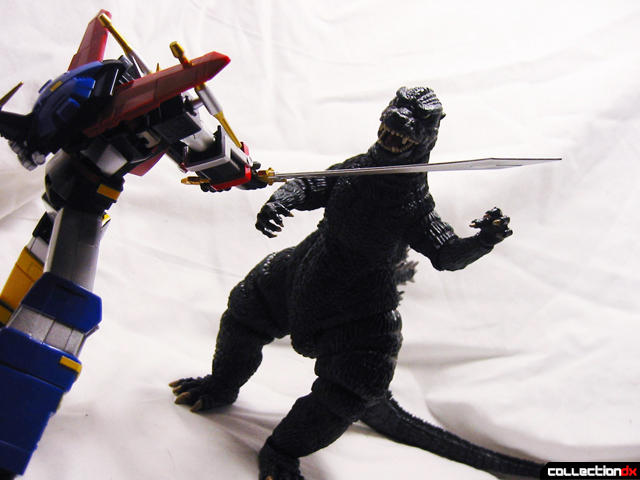 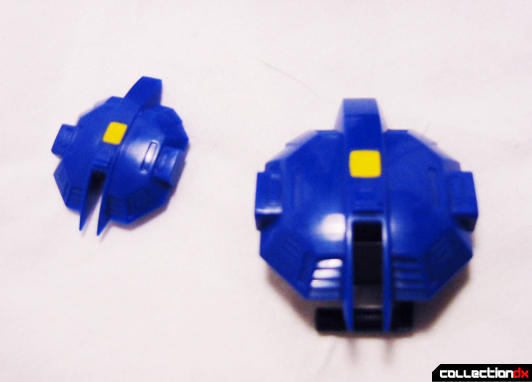 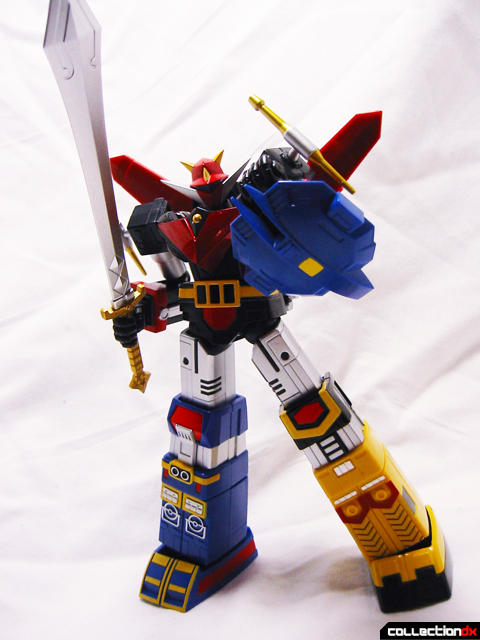 Now for the shield (called the God Shield), there’s one that you can take off the back but that’s just for show. In actuality, you use the large shield to hold. 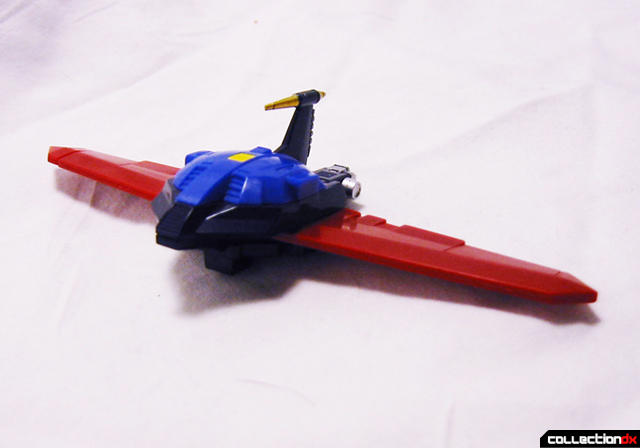 While yes this toy isn’t transformable, at least the Big Wing can come off. 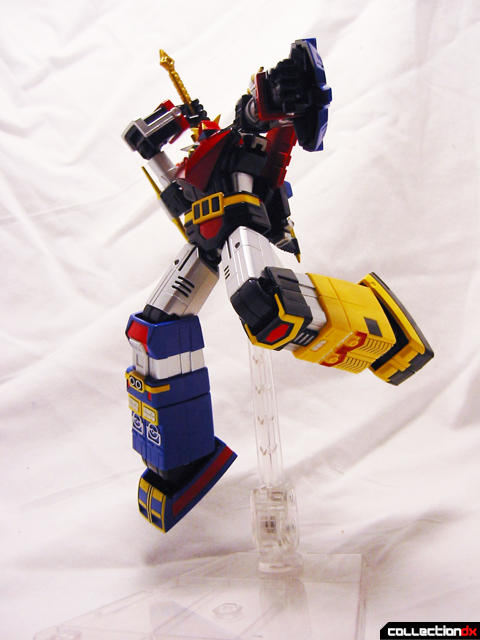 And of course, it’s usable on a Tamashii stand. 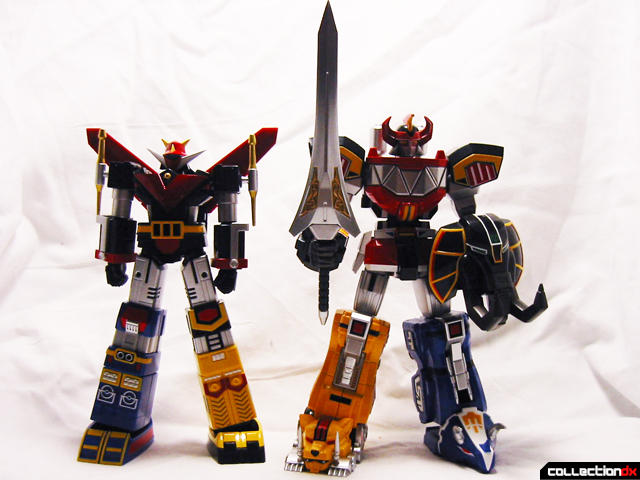 Because it has the same overall colors and blocky design, he it is next to SRC Daizyujin (which IMO is the most solid SRC I own). 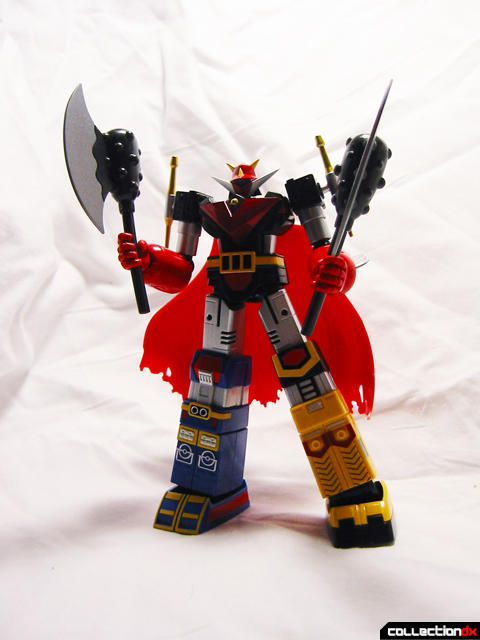 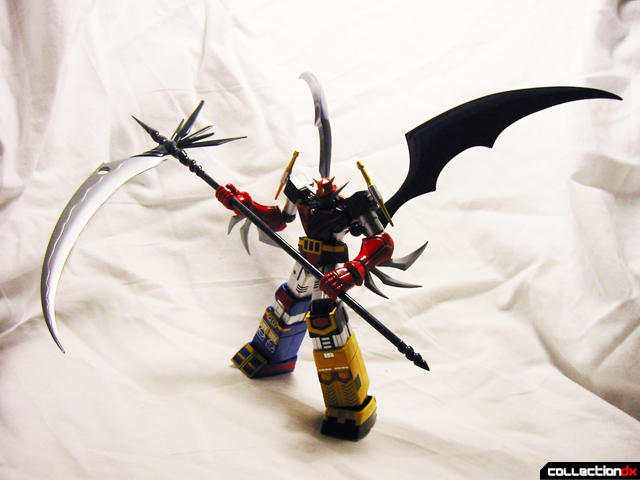 The neat thing about this SRC is it’s ability to switch it’s arms and wing with others that are compatible. Putting in the other arms is a bit tight but that’s probably since its regular arms fit loose on mine.

In overall, a pretty good entry in the SRC line. While I’d would have a bit more diecast (not a deal breaker but it comes off a bit of a rip off), it’s still a worthy one to collect if you like the SRC line or old school robots in general.

Thanks goes to HobbyLink Japan for sending this figure.

Very light, very small for an SRC, very little metal for an SRC and very expensive. This would be a great figure if it was limited to two of those circumstances. With all of them it is at best "good". It's a nice figure, just not at MSRP. The detail is great, but the fact that Gid Sigma stands a full head shorter than Daizyujin and company on your shelf is disconcerting and disapointing. SRC has released some showstoppingly good mechs. This is not one of them. It's not a bad robot figure. It's just not a great one.

Pretty much. I don't get why this is a full 1000 yen higher price point other than the change in inflation.

I'm debating if I should get SRC Gunbuster (love the OVA ) and Mazinkaiser (the chogokin Z version). I hope this isn't the beginning of the end for the line because they teased some great stuff like God Mars and Ryuseioh (Red Dragon Zord).

Completely disagree I heard all this before and it made me hold off on the figure. Now I own 2. It is exactly the same size as every one of the original SRC which was the original small chogokin concept. Recently SRC figures have been getting bigger but he is no smaller than the recent Getter and the same size as the Mazingers, people are getting selective size memory. I was much more disappointed by the SKL mazinger it's too big and the overall design is nowhere near as enjoyable to pose as God Sigma. There already is a huge SOC God Sigma that's not the point of this it's small and super poseable and awesome.

My point of reference for size and scale is the 5 Super Sentai combiners that SRC has put out. God Sigma seems most akin to them in terms of overall gravitas and design stylings. Between those, Gurren Laggen and Aquarian, similarly framed mecha. he is in a word small. Undersized. He is even a full head+ shorter than Kantam Robo. Everyone is free to draw their own conclusions and establish their likes, dislikes and their determination of value.

Me, given the generation of Mecha I would categorize this guy in with The Super Sentai and other Combiners like Aquarian and Gurren Laggen. Given the shear size and status normally held by this Robot, I would expect him looking impressive beside those others.

What we got was a smaller scaled robot that doe not loom impressively above the classic combiners. he may blend better with the 70's era mechs. But that still seems off.

In spite of the size he is a solid well made figure. If you can get him in the $35-$40 USD price range he is extremely good value. However at MSRP of twice that...

I see your point however I believe God Mars is on the way and we can only hope more of the SOC combiners. I hope they all sit will together and it's a theme moving forward. I like the Super Sentai bots but it's no major concern if he scales with them to me. I love this guy and I think people might get turned away on the "small" low diecast comments which are over-shadowing a solid well executed release with a stellar paint job, superb articulation and really smart joint hiding. I do prefer SRC getting smaller again now in retrospect I think the recent larger releases started heading toward SOC figures in terms of size and it starts to getting the lines a little confusing .

I saw this week SRC God Sigma being marked down to around the 3800yen on Amazon.co.jp. I think it's safe to say the SRC line is on its death bed with the exception of Mazinger recolors.