Fire Phoenix Gun King is the central part of a giant Chinese dart gun combiner robot. Yes, it is as insane as it sounds. But not only is it insane, it's actually very, very good.

There are five robots in this line, called Armored Forces of Heaven and Earth (铠力天地). At least that's what it says in Chinese on the box. However, also on the toy is Adventure Force, and on the manufacturers website, it's called "Kaineng Armored X'Man". The latter would make sense with every toy having a "K" designation on it somewhere.

The other four in the line are:

There are A and B versions of the toys, with the "B" being gold colored and the "A" are multiple colors.

The box is quite large, and loud and colorful. It takes it's design cues from the recent Transformers movie line, with the angled side, and red band with faux autobot logo at the top. There's also a handy carrying handle. 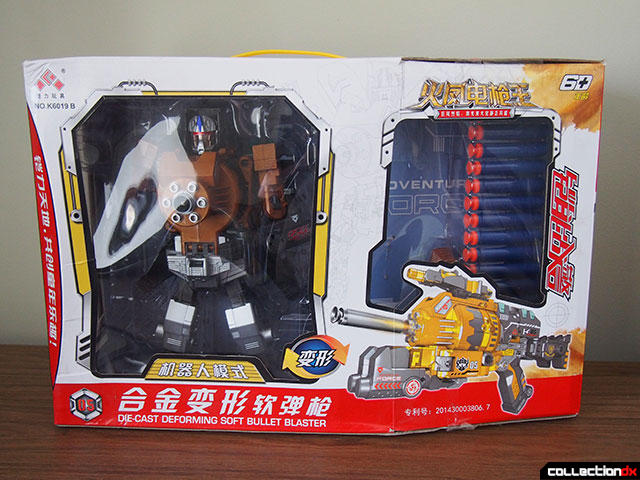 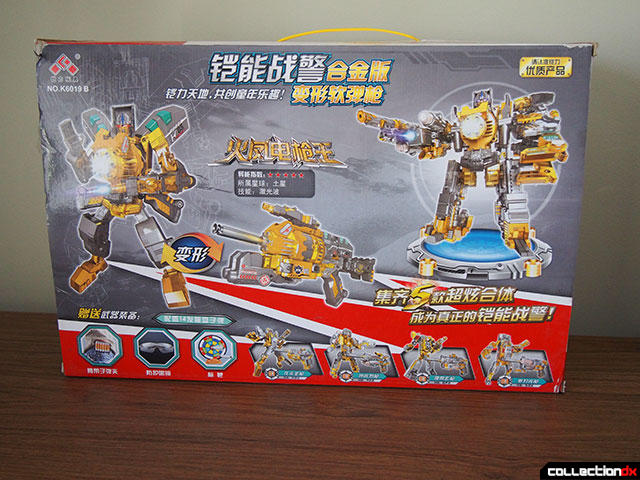 This toy is big and heavy. In robot mode it stands about a foot tall, and actually has a fair amount of diecast in the construction. The silver parts on the legs, and the handles on the back are both solid diecast metal. 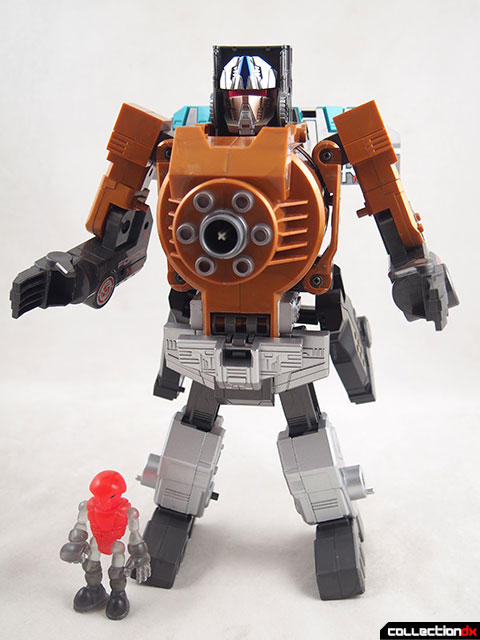 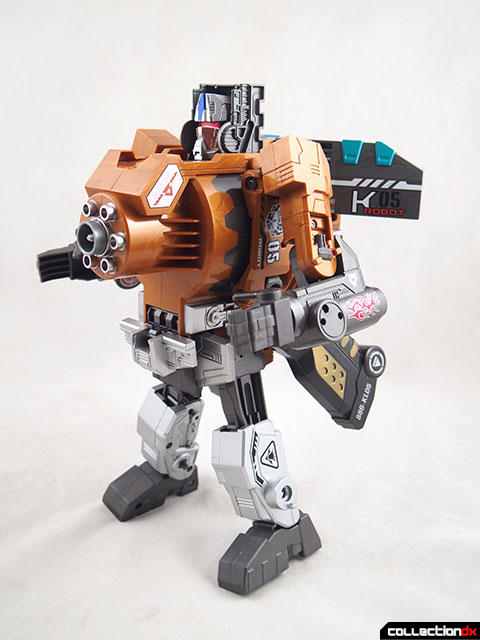 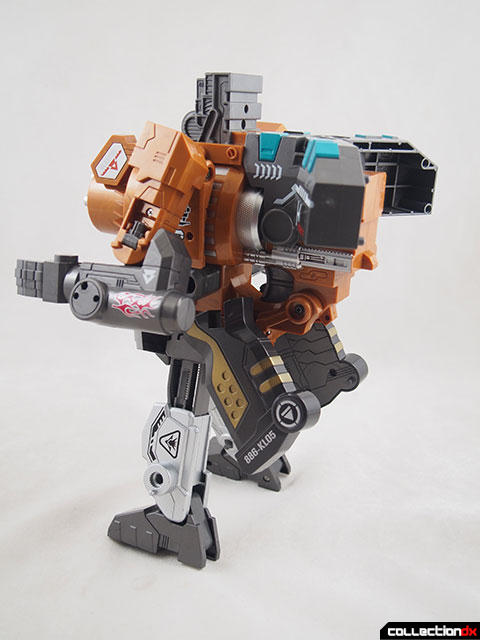 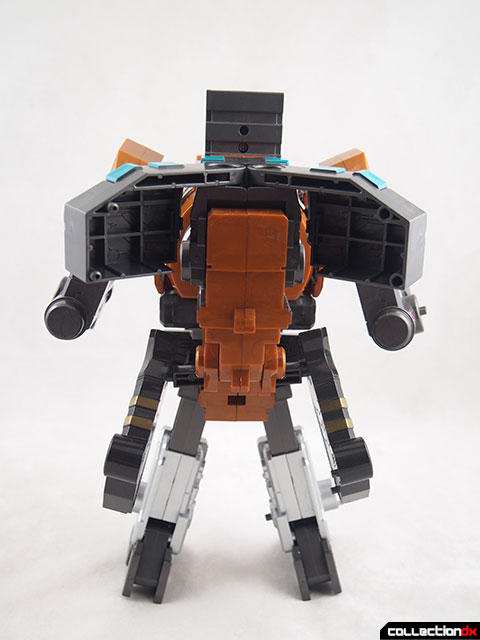 There's nice painted details all over the figure. Nothing was skimped on there. The details are crisp and clean, the mold is great, the material is top-quality. 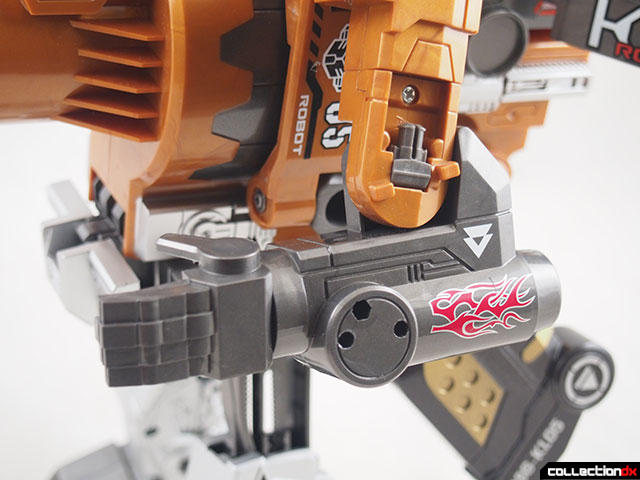 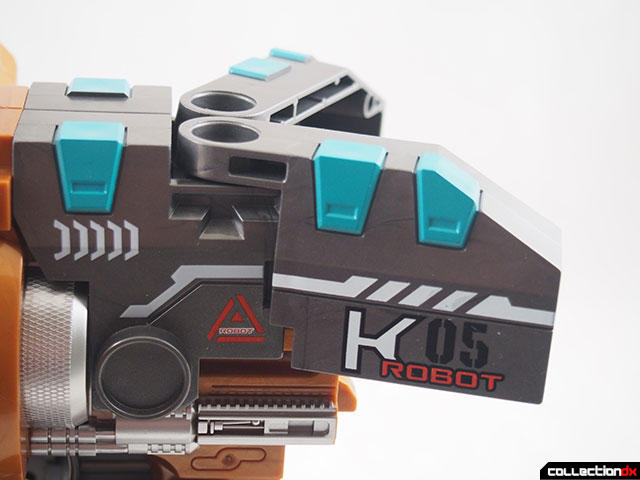 The design is a bit dorky though. The head is oversized due to it's doing double duty as the head for the combiner. The legs spay out, and the arms move in a typical "I am a robot" fashion. 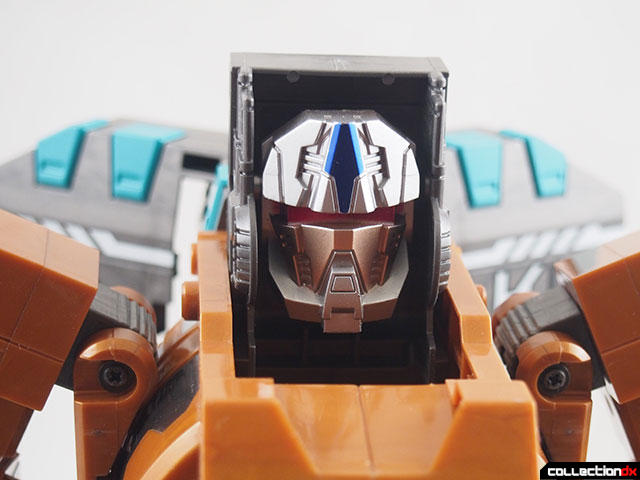 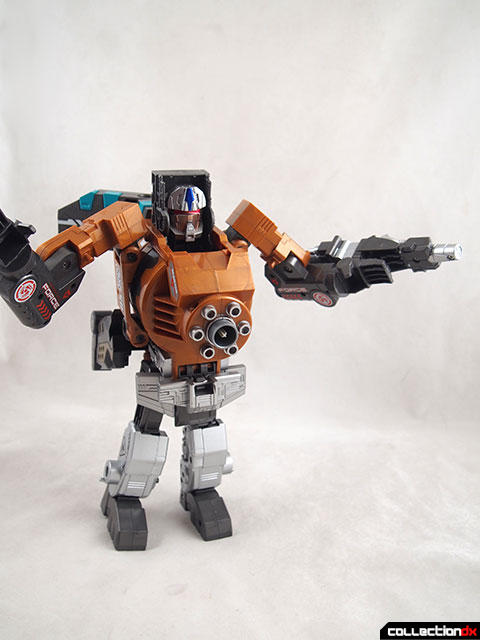 There's a gun that attaches to the left arm, it does not shoot anything. Holes on the side look like maybe it was designed to have light or sound. 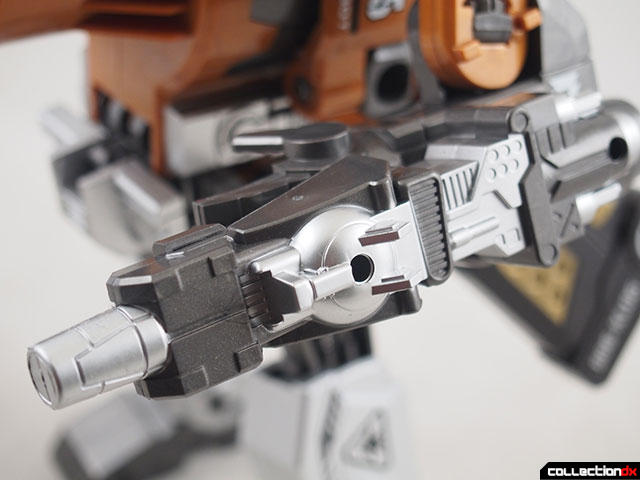 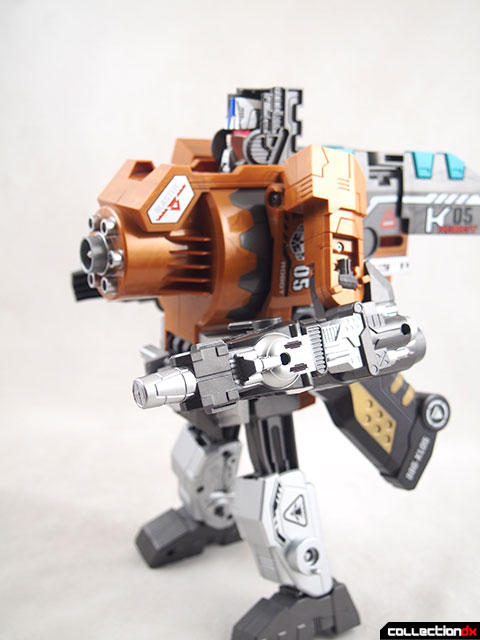 In robot mode, the dart gun action is fully functional. Pull the back section to cock the trigger, and then pull the trigger to launch the dart with a surprising force. It's at least twice as strong as any domestic Nerf gun. 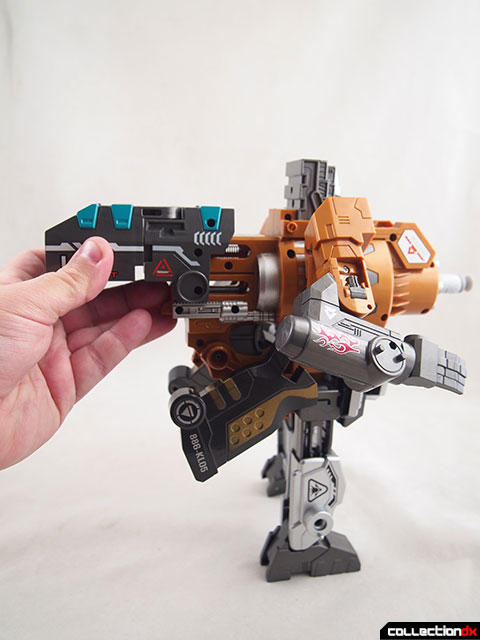 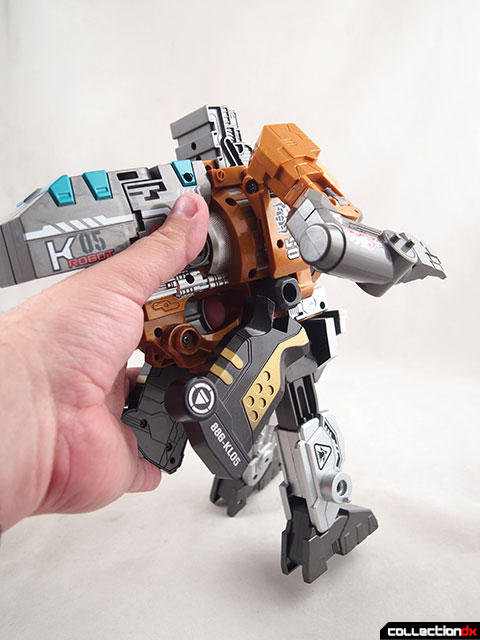 Transformation is a joy. Seriously. Every part clips or pegs into another part, enabling a secure, and good looking gun mode. It's appropriately sized when in gun mode, and the whole thing feels great, a large part due to the die-cast metal grip. 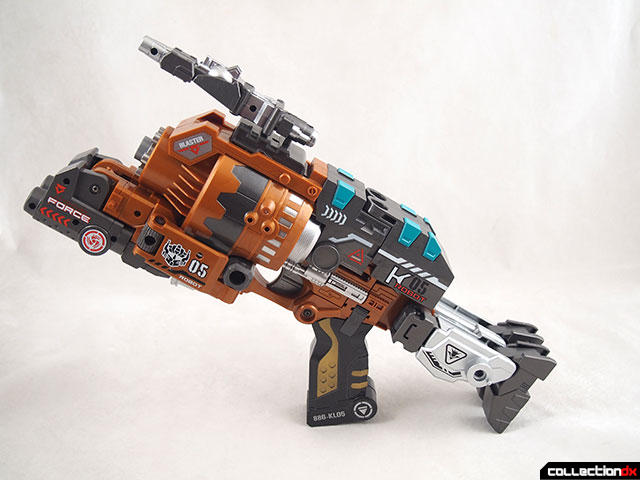 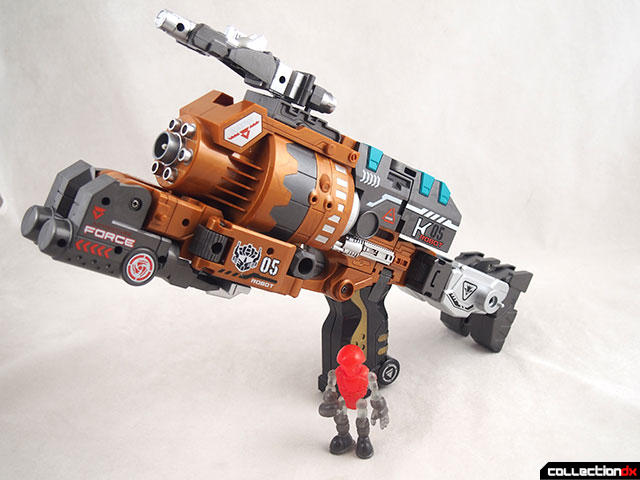 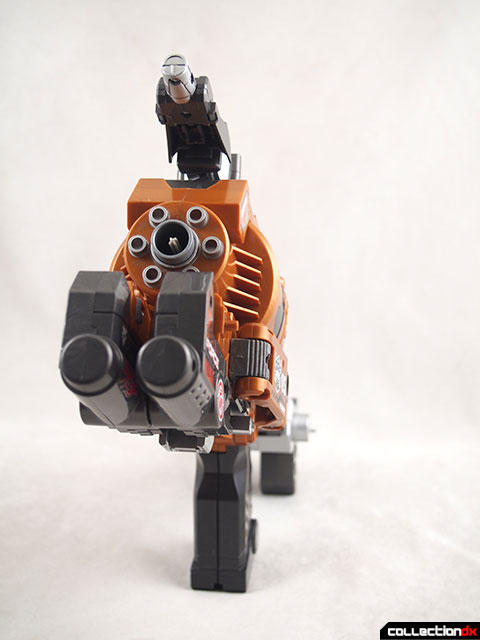 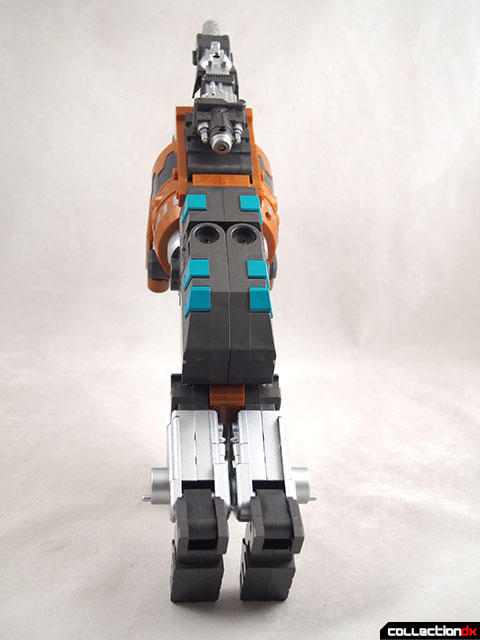 You get a lot with this set too. Check out everything that is included: 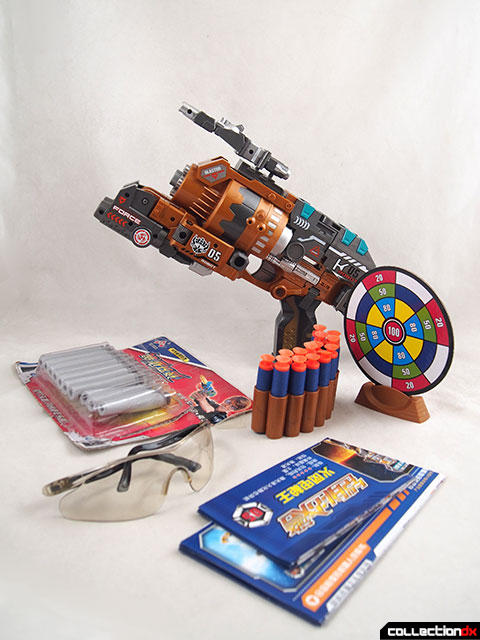 The cardboard target sits in the plastic base, and the belt clip holds additional ammo. 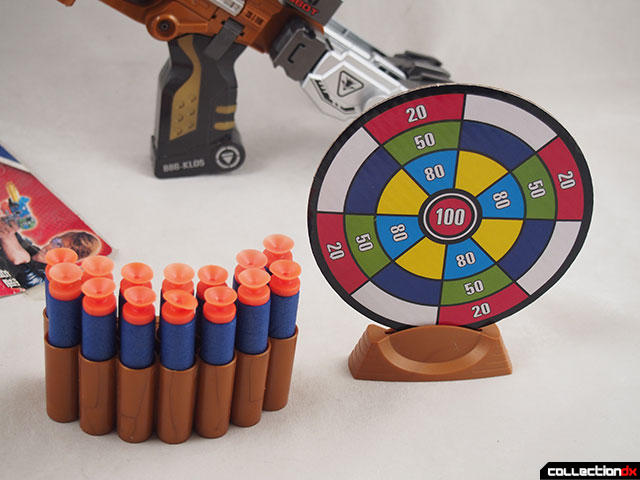 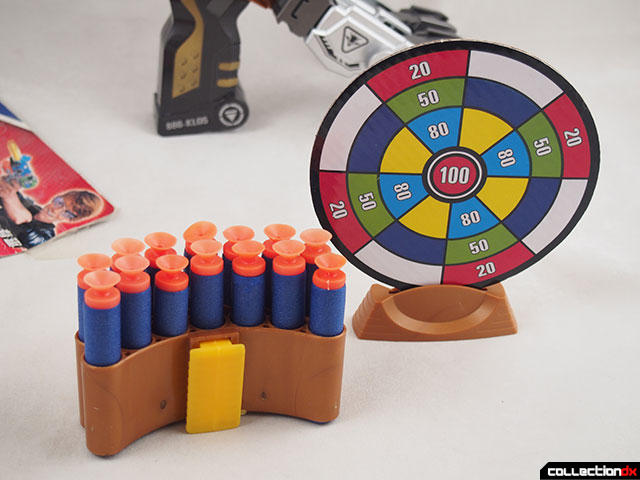 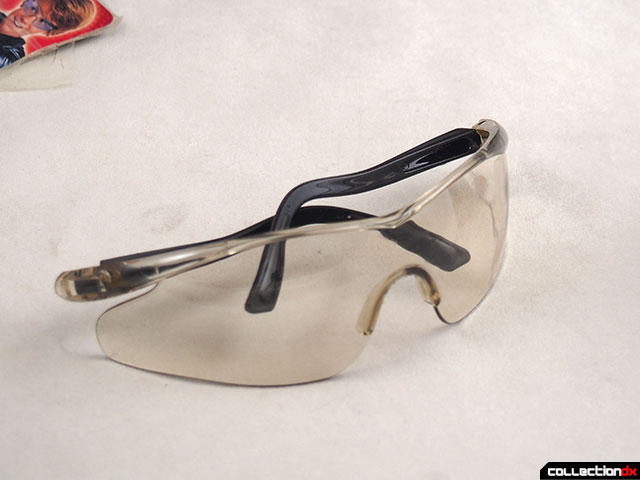 Mine even came with an additional set of silver darts taped to the front of the package. 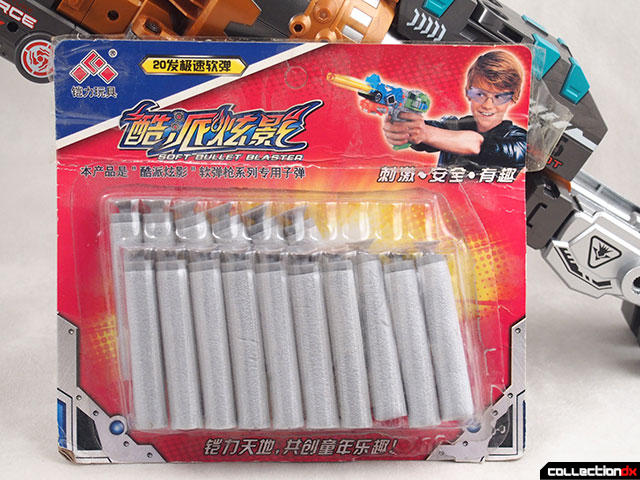 I have to say, I am SUPER impressed with this toy. I'm not sure what I was expecting, but I know that I did not expect this level of quality.

These can be hard to find, but this one (and the others in the series) can be found at Gearbest.com!

There's also several listings on Amazon of dinosaur/dart blasters that combine. The Chinese sure love their combining guns.