Ferocious Wolf Gun (独狼玄枪 Lone Wolf Mysterious Gun) is the third in the series of transforming foam dart guns from Kaili toys. This is an original design from China, but it's not a cheap knock-off. This is a high-quality original transforming toy with die-cast metal.

This too was ordered from a vendor on Aliexpress, but it was yet again a new vendor. So that makes three different sources needed to purchase the entire set. But whereas the other sets came boxed in retail packaging, this one came in a simple brown box with some bubblewrap and the toy in robot mode. No clear tray, no twist ties. This was fine with me actually as I ended up throwing the boxes away. Still, while I did receive all my packages from Aliexpress, your mileage may vary.

In gun mode, Ferocious Wolf Gun is a rather compact pistol. It features die-cast metal on the grip and under the barrel. The top scope is removable and of course it is a fully functional dart blaster. Pull back the back section to arm the gun, pull the trigger to fire. 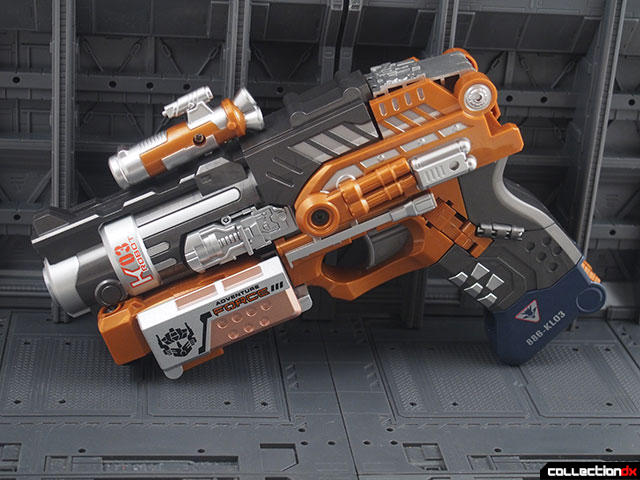 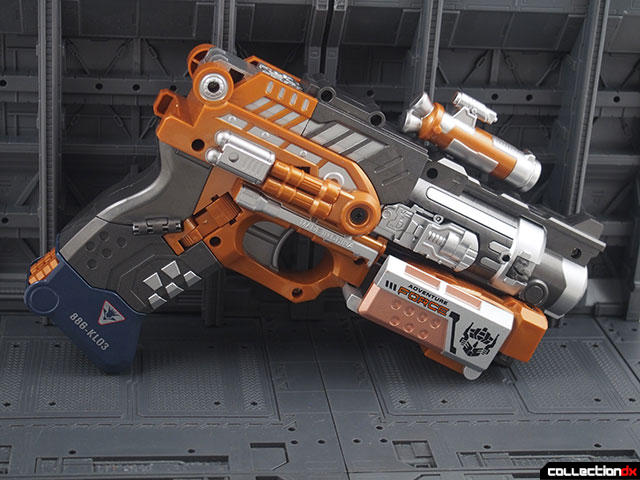 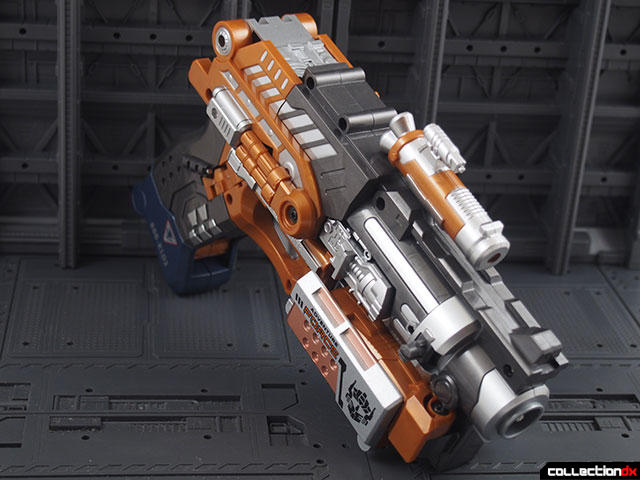 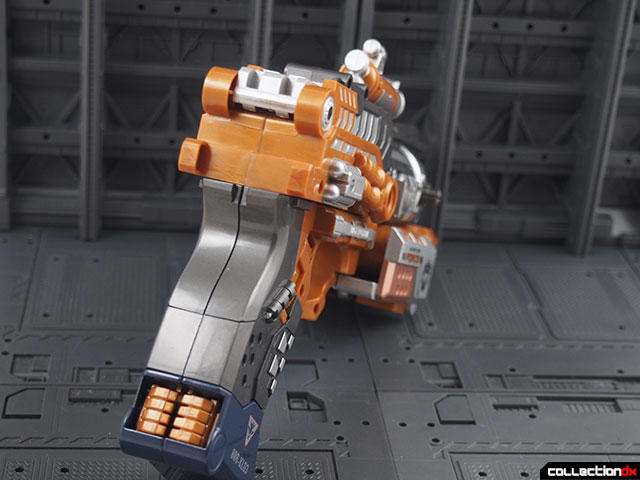 Robot mode is fine, but it suffers from the same drawbacks as the others. Neither the head nor waist has a joint. But it looks good, and it is reasonably articulated otherwise. 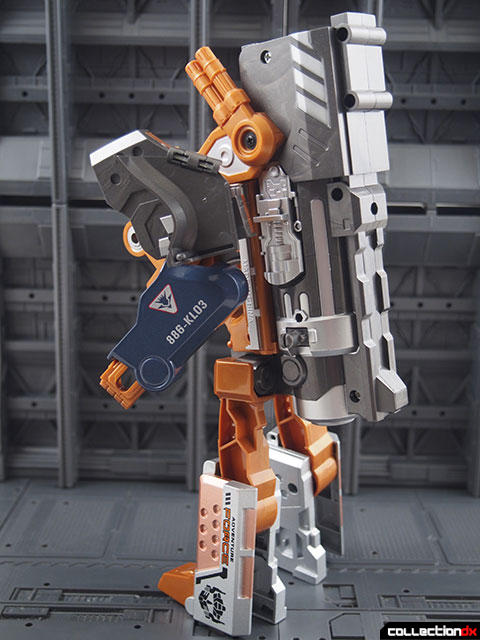 The small scope on the top can be used as a weapon. 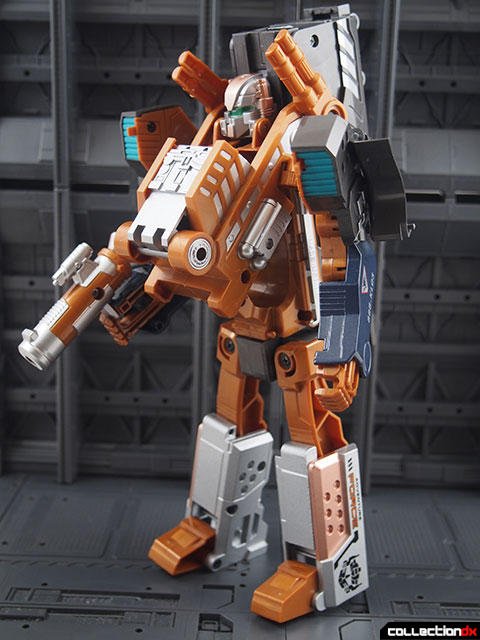 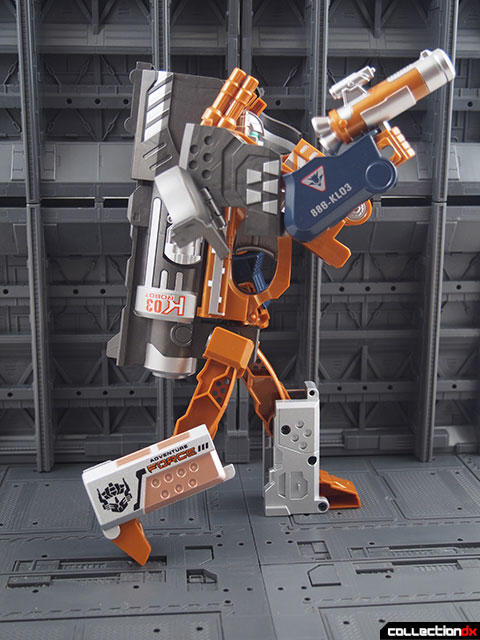 It's a fun robot. But at this point, i'm all about the combined form. Each gun becomes a limb to a giant robot.

03 becomes the right leg. The parts of the gun hilt just fold around the back, and don't do much to support. 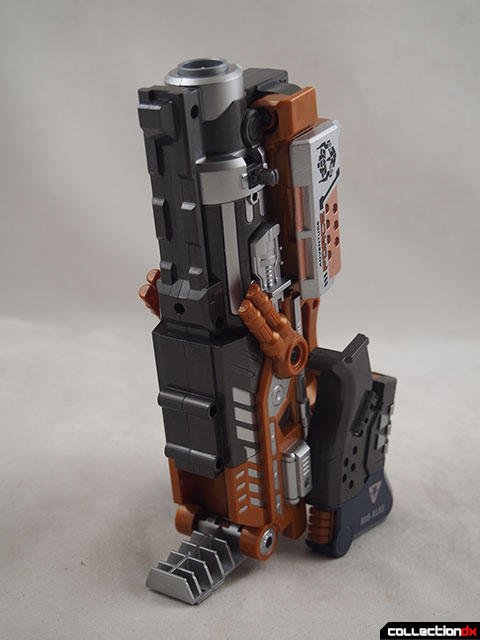 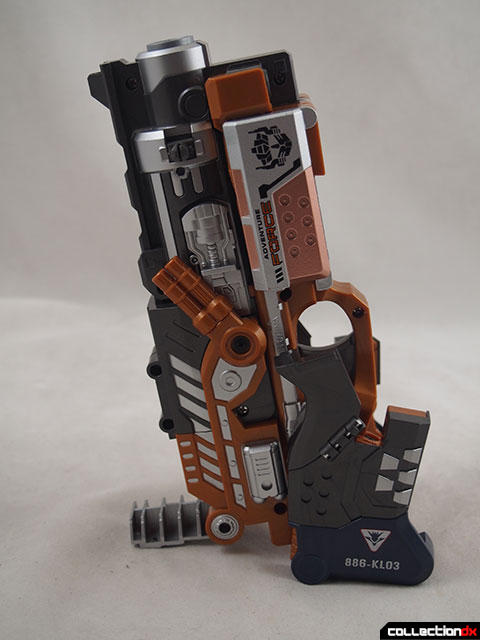 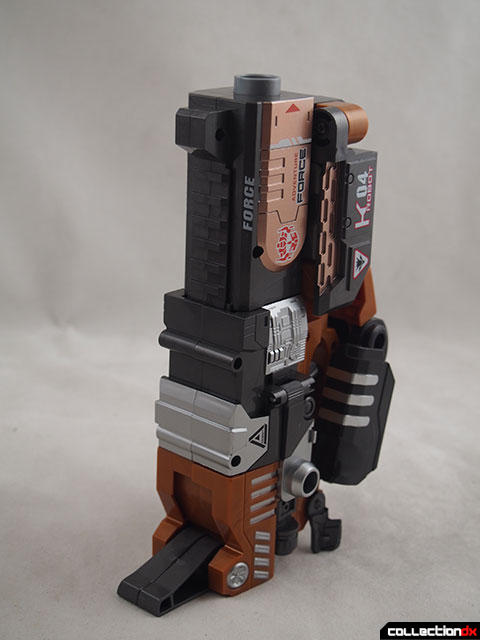 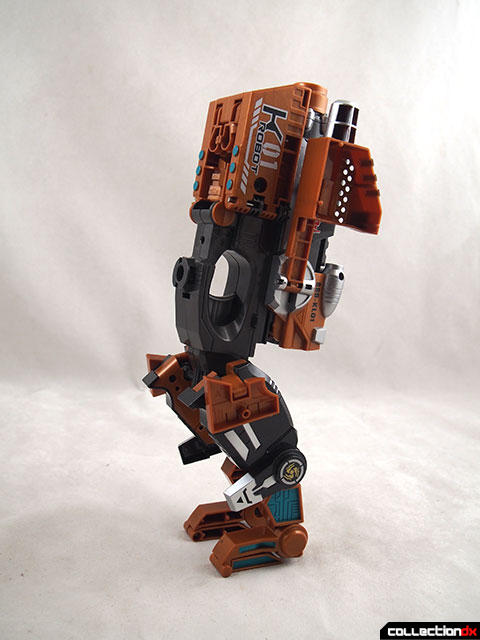 05 becomes the chest of the robot. All the parts combine to him. The legs peg in on the sides of the metal legs of 05, and they have pegs to keep them from moving. 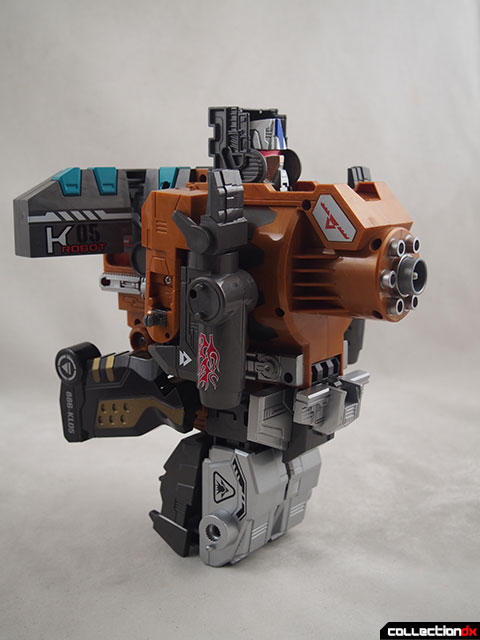 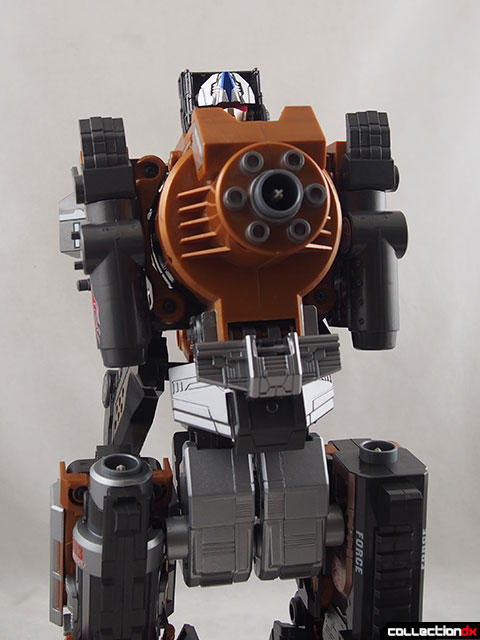 Combined it's sort of a mess. I mean, it's huge and heavy, but it's just not put together well. 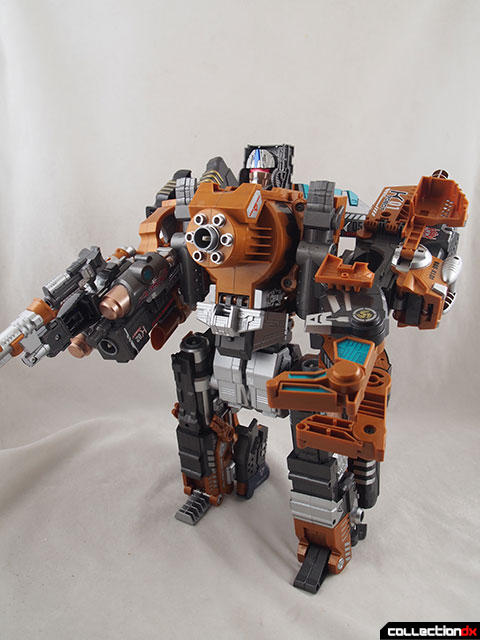 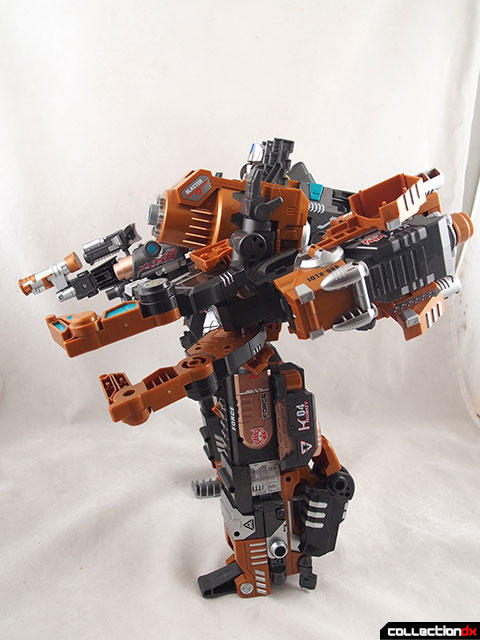 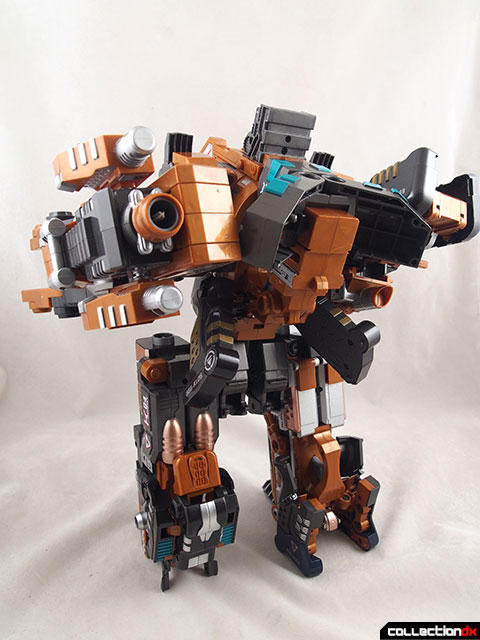 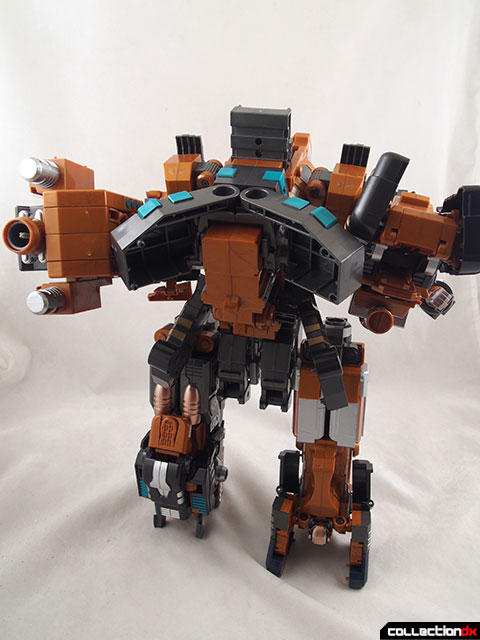 One cool thing is that all the guns for all the individual robots combine into one large weapon that clips into the right arm. This arm does not have a hand, instead it has the gun attached. 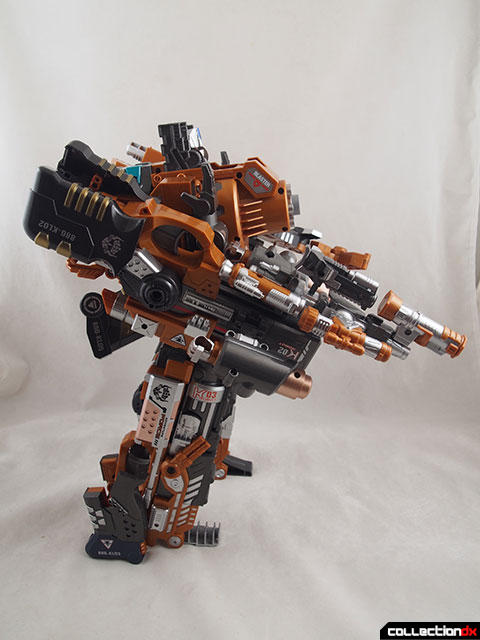 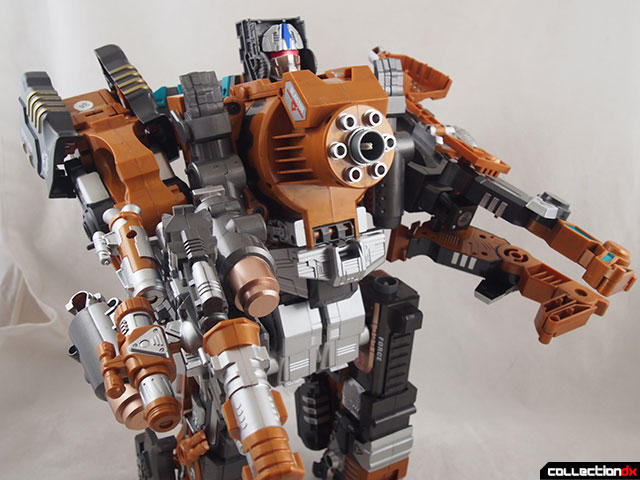 The other arm forms a sort of claw. Both arms are locked in place and have no articulation. Basically, it's a big brick that you just leave on the shelf. But the journey of discovery was more than worth it. With each robot came a new experience, a feeling of finding something new and fresh. For the most part, the toys are an amazing accomplishment. Five different perfect-transformation robot toys that transform into fully-functional dart guns. Each comes with darts, a target, and safety googles. Each features diecast metal construction with flawless paint apps. In fact, the only letdown of the entire thing is the not-well-thought-out combination. But I still think it was worth it. 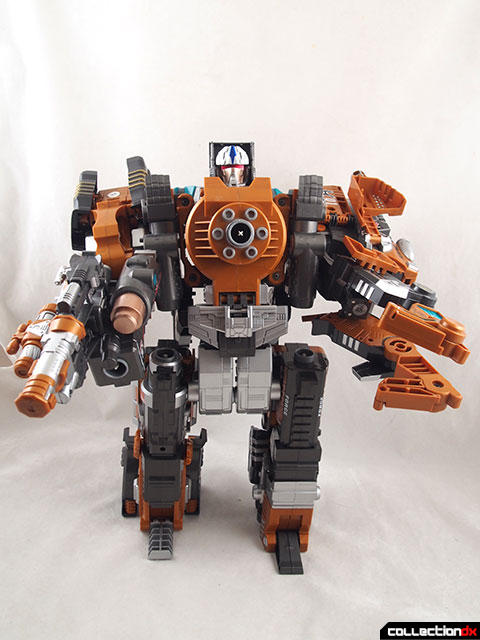 2 comments posted
Do all these robot guns

Do all these robot guns somehow come together to form a giant Robot Death Star Cannon of Destruction?

Hey thanks for the review, Ben over at Benscollectable did a good review too.
curious why you bought from multiple sellers? The entire set has been available for ages at sirtoys.com (minus packagin so cheaper shipping etc) I'm looking forward to buying them later this year.
What sort of price did you find them for?
Glad to see these cool toys getting some more coverage. I'd love to see more stuff like this and Glacial Lords with that unapologetically chunky 80's / G1 toy aesthetic.