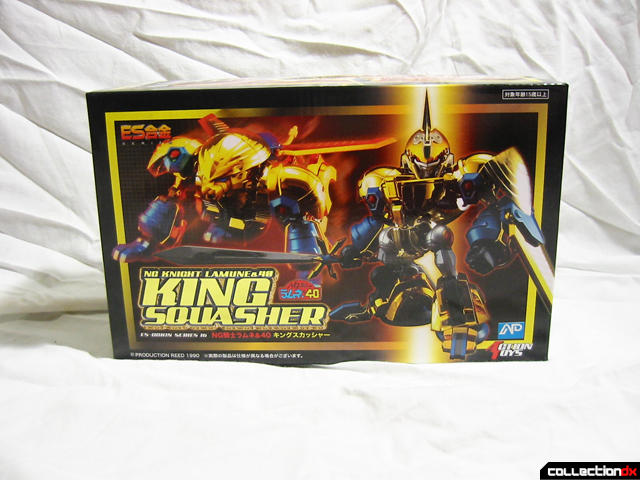 In the late 80’s/early 90’s due to the popularity of SD Gundam and Wataru, there were a bunch of robot anime that were in the super deformed proportions. One of these was NG Knight Lamune & 40 from 1990. I haven’t seen the anime but it looks like something I’d enjoy. Being a semi obscure robot anime, there have some but not many toys from it. Originally released by Bandai and then Megahouse. This particular figure I’m reviewing is the main root from the anim called KIng Sccasher (the box has it romanized as King Squasher) from Art Storm’s ES Gokin line. ES Gokin focuses on turning popular mecha into SD proporioned toys but this design is already SD but it’s still fitting for this line.

The first thing I noticed was how heavy the box is. 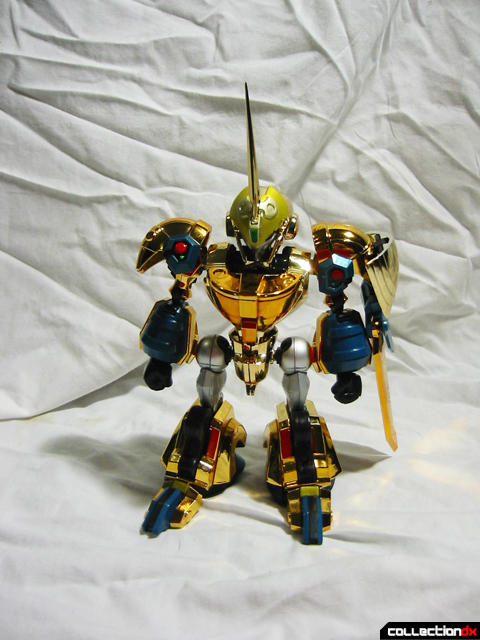 Taking it out confirmed this, as the toy has quite a bit of metal (especially in comparison to Bandai’s Super Robot Chogokin line). Out of the box standing at 6 inches, this thing is just beautiful! Lots of glistening gold vac metal (which unfortunetly can scratch easily in certain places). Details are nice and crisp. The figure itself it sturdy but please take care of handling the spike on the head since it’s thin and hard plastic coated in vac metal so thus it’s fragile. 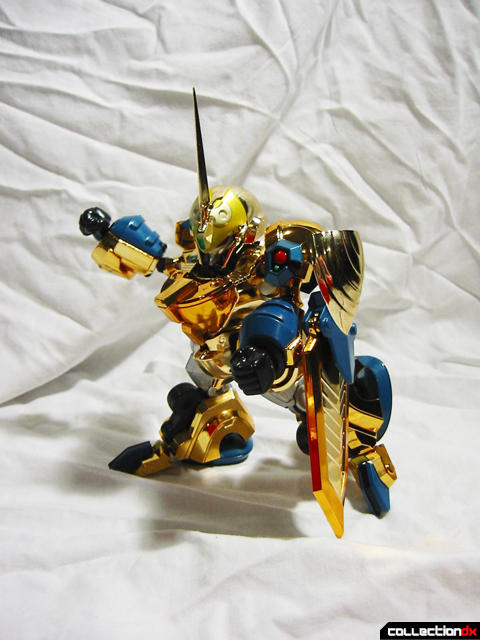 It’s pretty well articulated and holds its poses well due to the rachetning joints in the shoulder and hips, along with all the other joints just generally being tight. 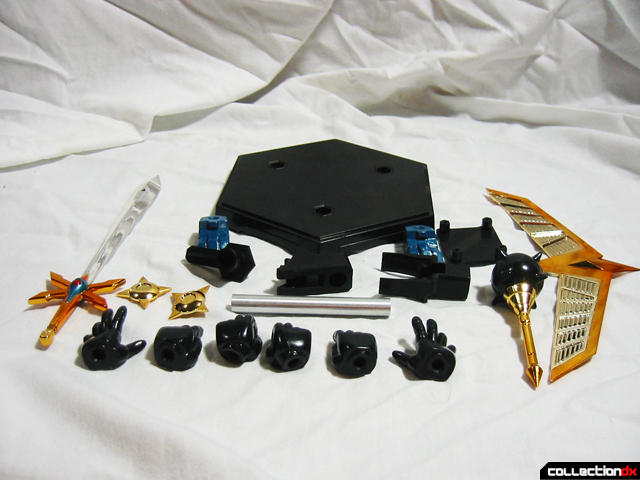 Accessory count is satisfying. Four pairs of hands, sword, club, two shurikens, wing boomerang, large feet for lion mode, stand, stand attachments (including a metal rod) and a connector piece that can attach the stand to other ES Gokins. 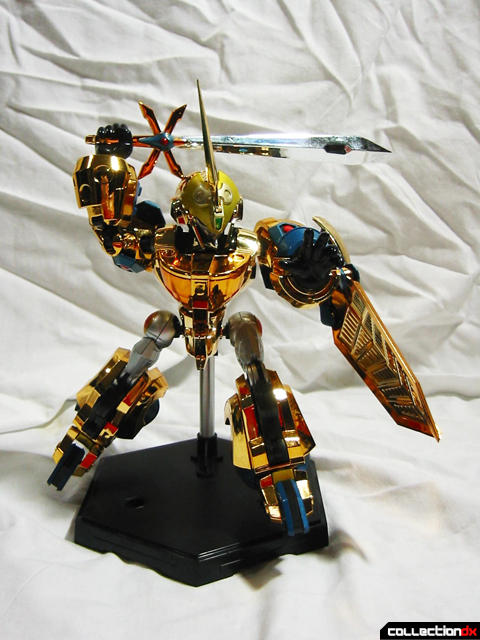 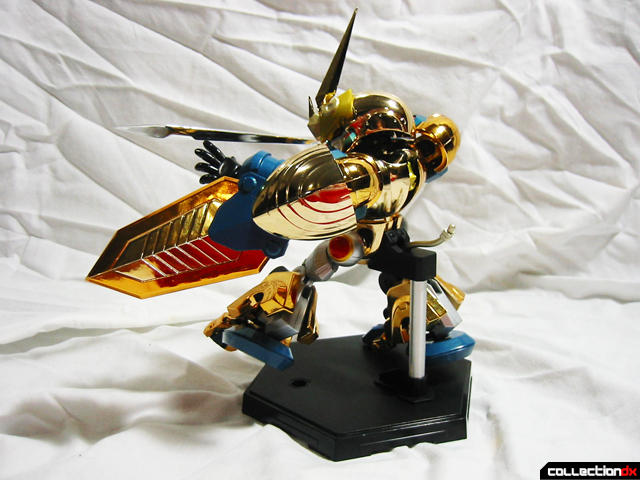 To attach the to the stand, you need to pull down the lion tail and thread it though the plastic connector to which it’s able to clip to the butt of the figure. It holds surprisingly well despite the weight of it. Switching the hands is a bit of a pain but doable. The sword is easy to put in as long as you pull off the bottom of hilt first. The blade’s got a nice thickness to it. 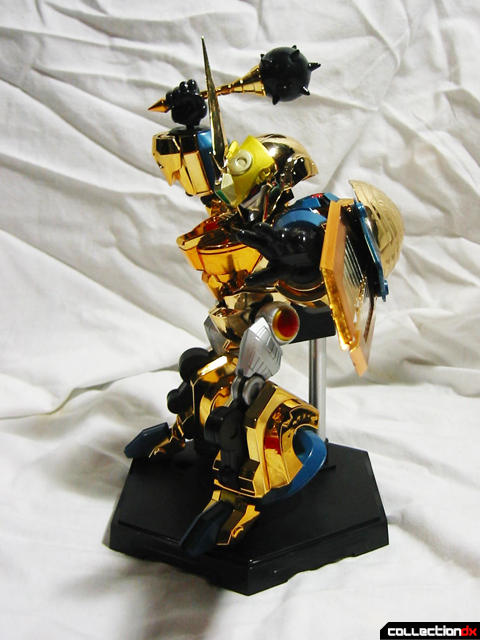 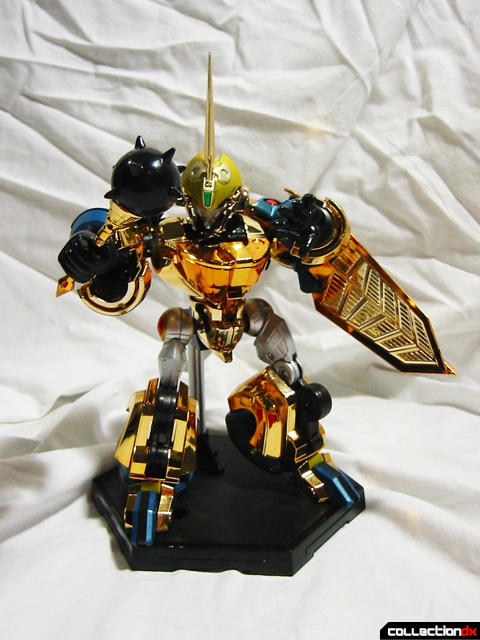 Same thing with the club. Pull the bottom of the hilt off to put it in the hand. 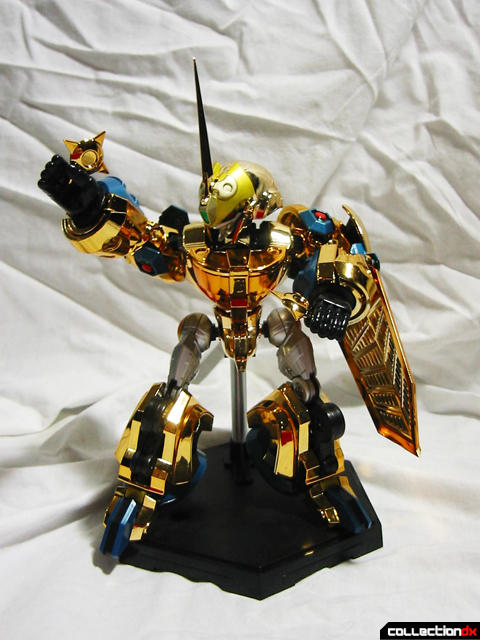 The shurikens require another set of hands which stay in easily. 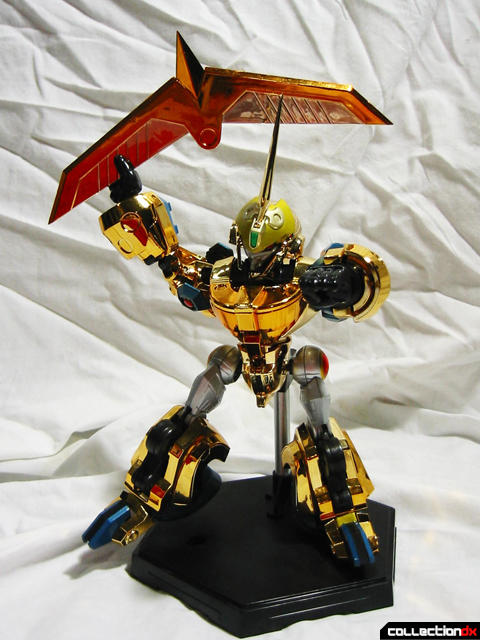 The boomerang is a nice piece of vac metal. 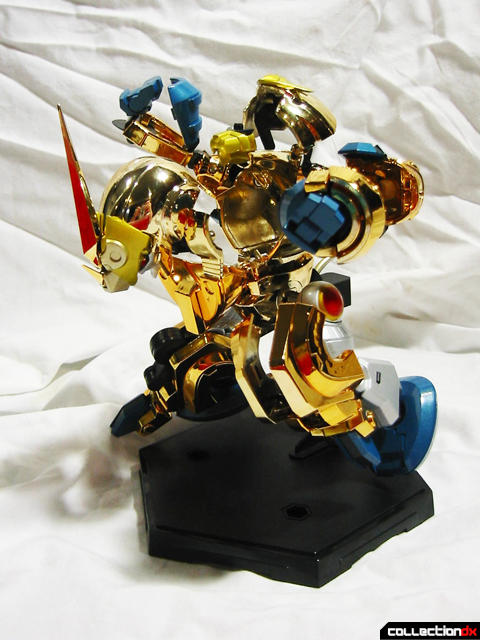 The transformation into its lion mode is quite complex. Fists rotate to reveal lion paws., Entire torso assembly opens to store the robot head for the lion. Hips need to pull out. Lower leg covers go up to the thigh (which scratched the thigh paint). The real pain was the way the knees slide up and then you have to push the lower part to make it align correctly. A few tries and I got it right. 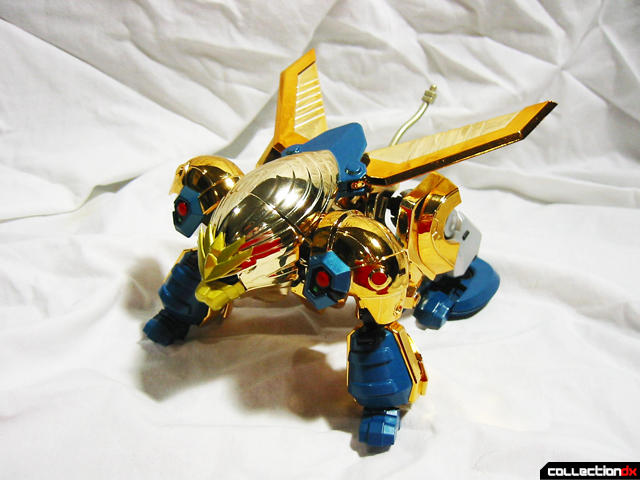 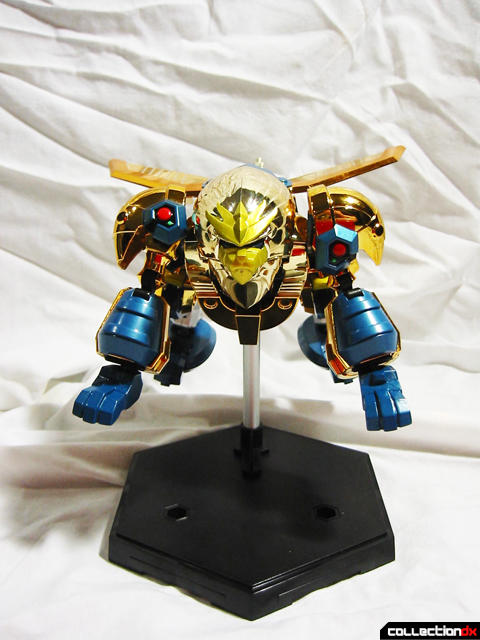 Once finished, you get a nice posable lion with articulated wings (in and out plus up and down due to a ball joint design). I can’t get the front paws to even though it has a joint there. 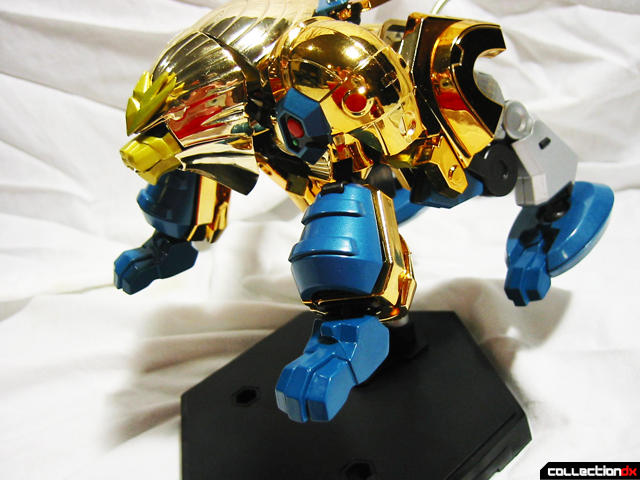 There’s an extra pair of larger feet for the front legs (I’m guessing for anime accuracy). This mode also has it’s own stand attachment which hold the figure very well. 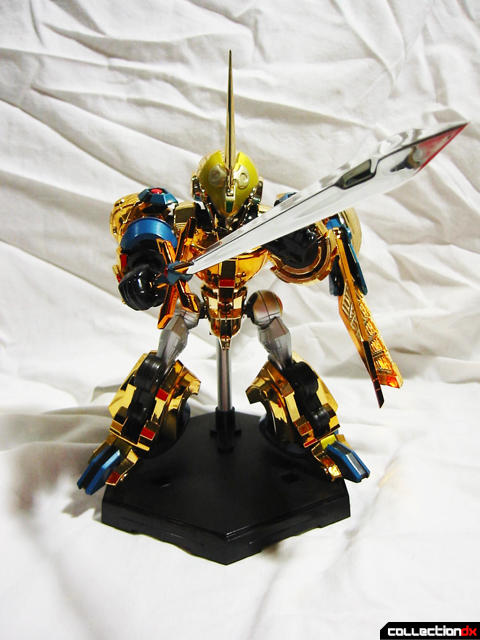 Overall, this is a lovely figure that is just gorgeous. While expensive, it actually is worth the price since it’s got a lot of metal, chromed vac metal and is transformable. While I’m bit annoyed that the hands aren’t easy to swap and the paint scratches, it’s still a wonderful piece and worth grabbing even if you’ve never seen the anime.