The Earth Engine Impacter comes from the anime series Captain Earth, which aired in Japan in 2014. The series is currently available on Crunchyroll.

I've only watched a bit, but it's rather typical in your "special kid is chosen to pilot giant robot against aliens" except the aliens look a bit like Team Rocket from Pokemon. It doesn't seem groundbreaking in any way, but the mecha designs are pretty cool.

The main mech, Earth Engine Impacter, is actually a combiner in the show, similar to Gaiking, in that separate components combine to form the robot. It's an overly elaborate combination sequence, which involves being shot from earth in a rocket and then passing through three separate space stations to gather all the parts to make the robot. Director Takuya Igarashi was adamant on having a good looking launch sequence, and he may have gone a bit overboard.

Regardless, Earth Engine Impacter is interesting looking. It was designed by Shigeto Koyama, who also designed the mecha in Takuya Igarashi's other work, Star Driver.

The box is average for what you get these days. Thin cardboard, plastic tray, die-cut window. 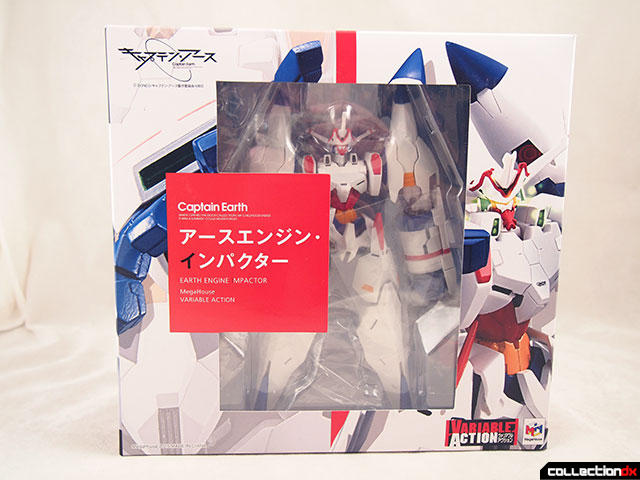 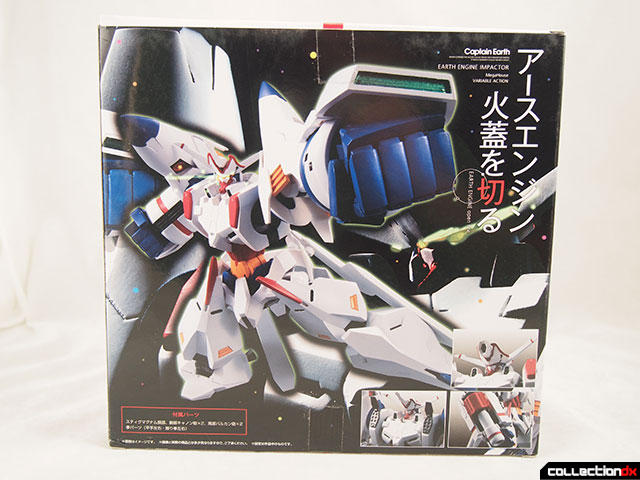 The first thing you will notice is that the robot cannot stand on its own. This is because it is a space-based mecha, and as far as I can tell never touches the ground. As such, the included stand is essential to display. The robot itself is 18.5 cm tall (7.5 inches) and made entirely out of plastic. 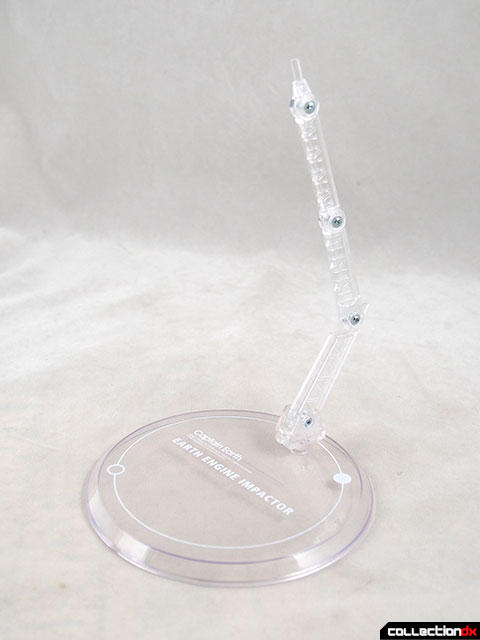 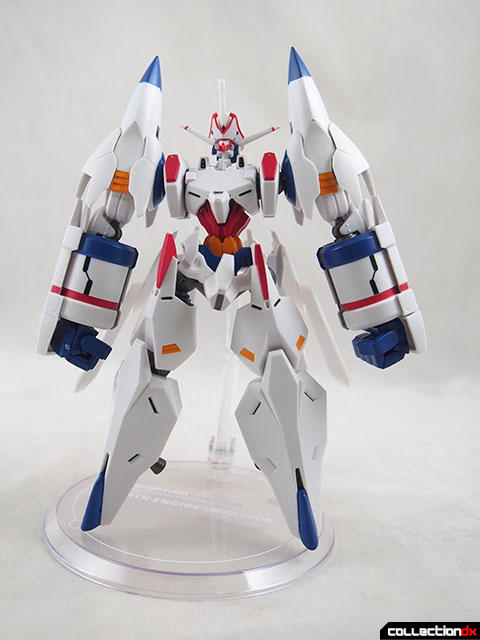 The only thing you need to assemble out of the box is the fins on the back of the skirt. It's an interesting looking robot, but sadly it does not break down into its individual components. Like the New Arhan, again this robot is missing its primary gimmick. Best for display, not for play. 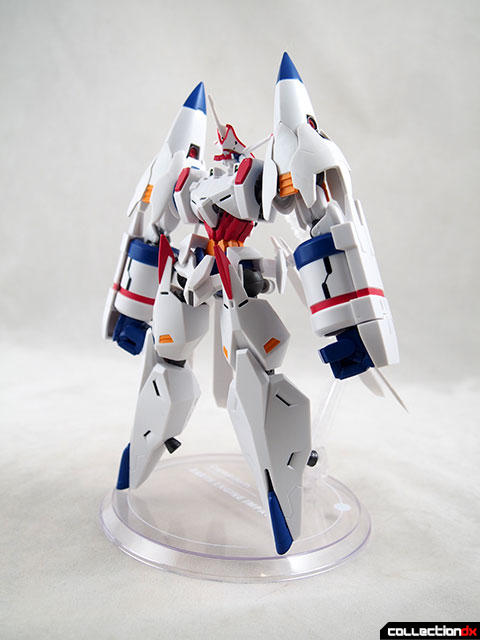 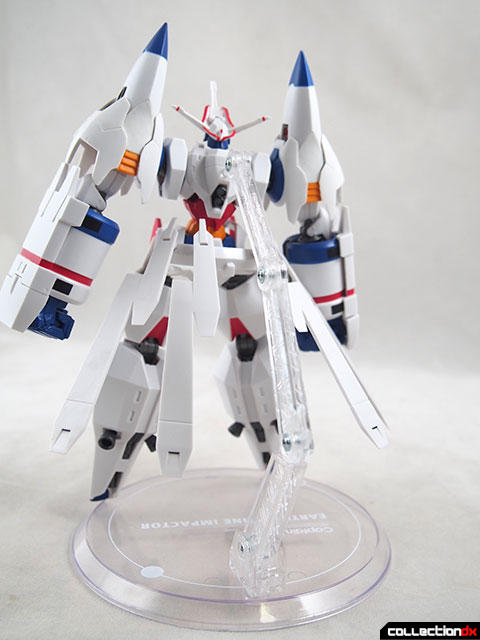 The head has a pirate look to it mixed with a bit of Evangelion. The center bit moves up and down, I think to replicate the final part of the transformation. 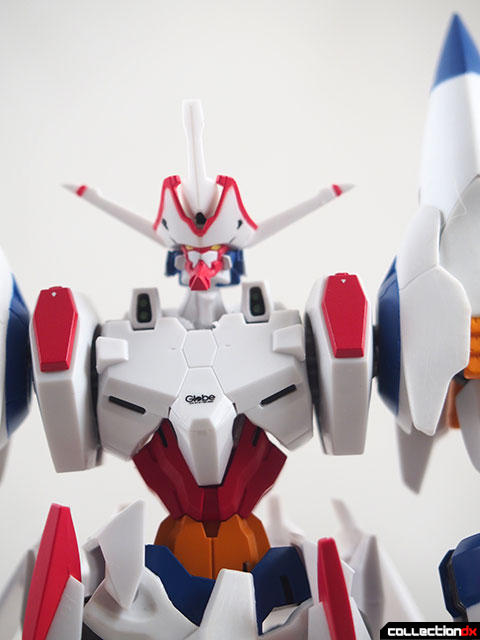 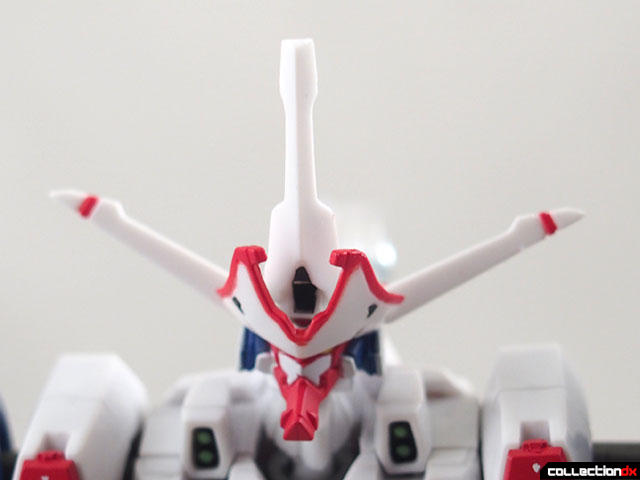 The big cones on the shoulders limit movement a bit, but the bottom of the cones have flexible sections that allow for some leeway. 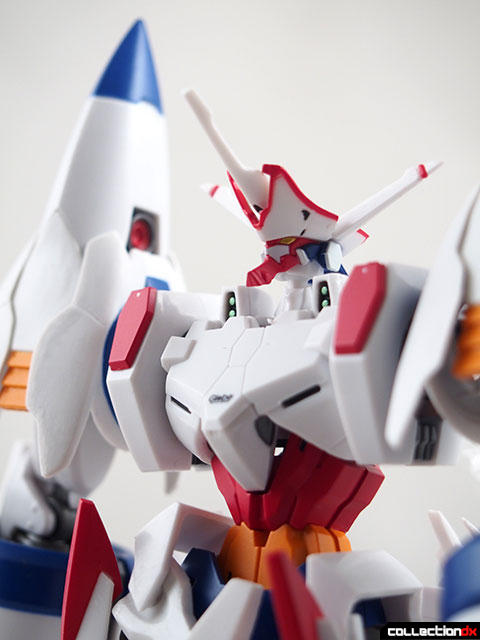 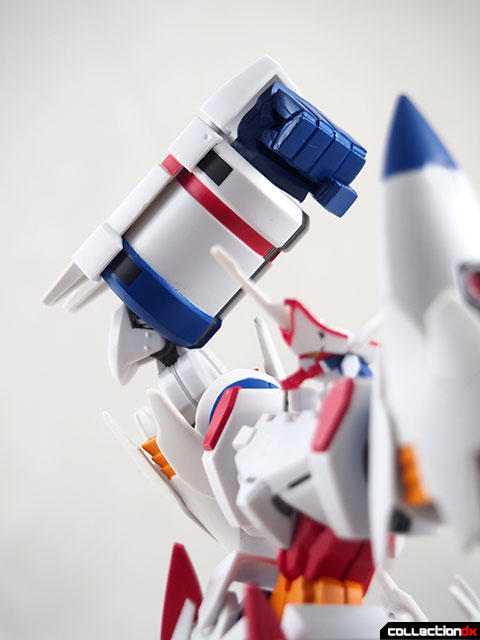 Little engine nozzles are scattered throughout the design. 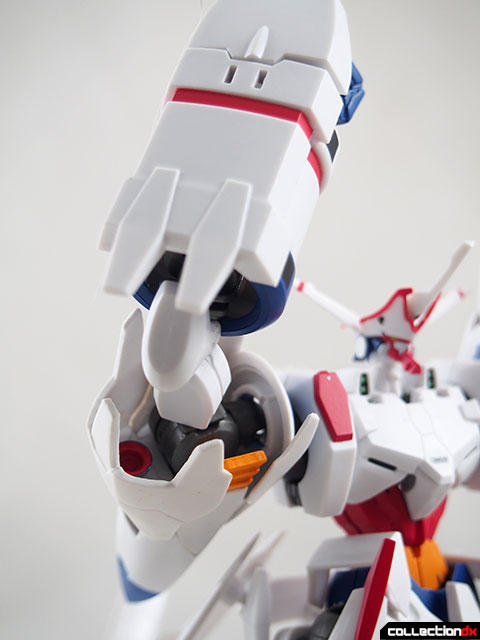 The waist has an ab crunch, the skirts move a bit, and the hips are on ball-hinge joints. Knees have a limited range of motion. 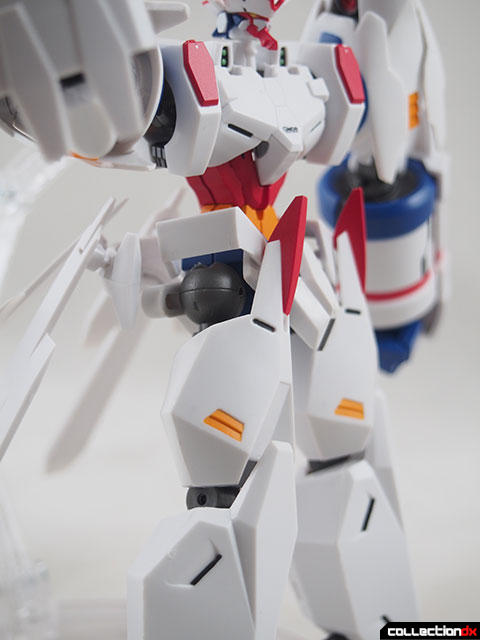 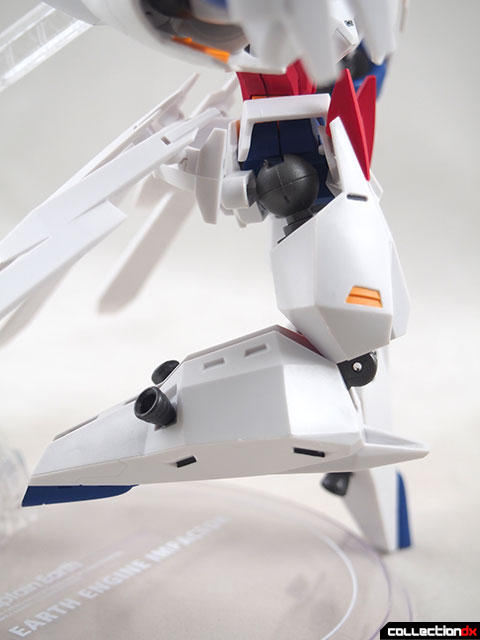 You'd think a space-borne robot would be more articulate than this, but it's just so damn bulky. Lots of things move, but they don't move very far. 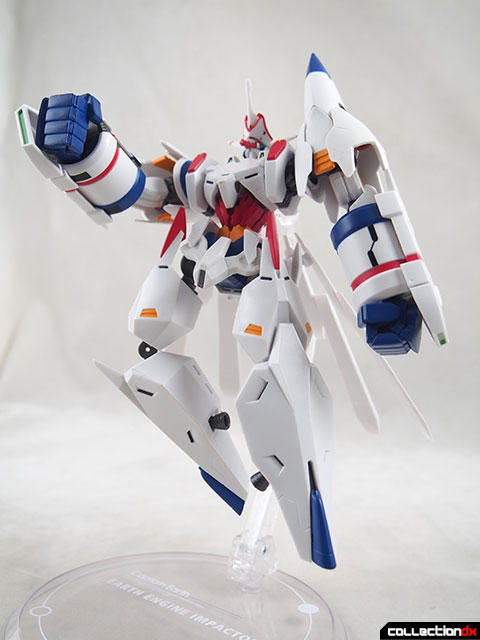 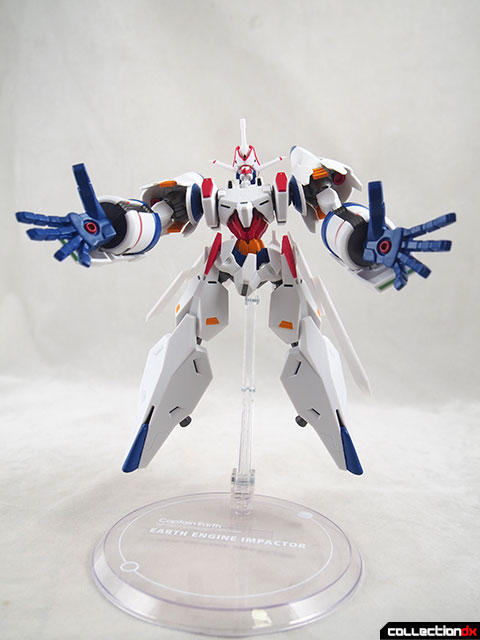 In the anime, giant arm cannons pop out of the forearms, but for the toy they are replaceable panels. 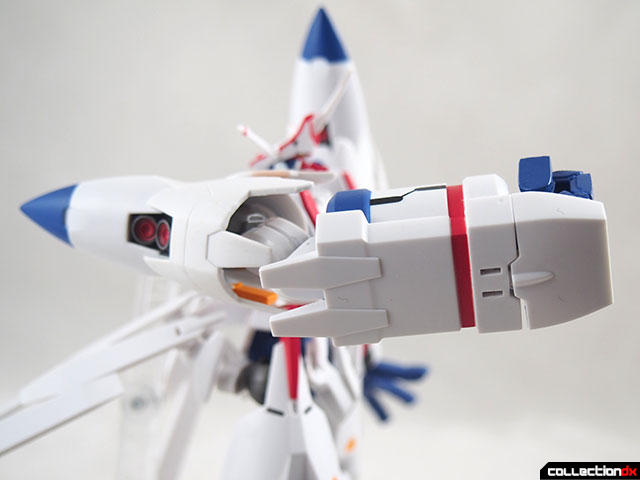 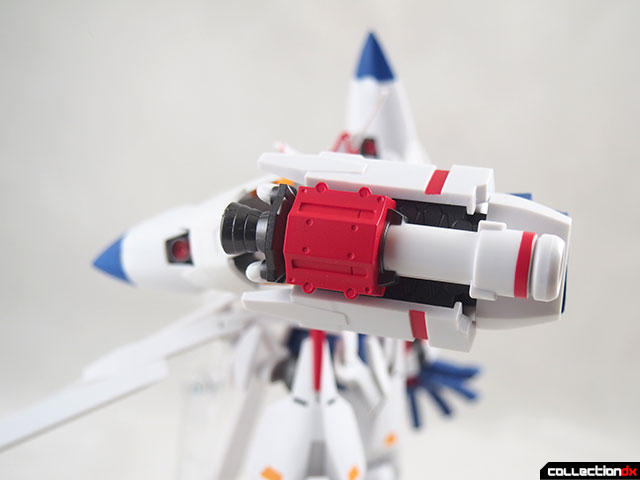 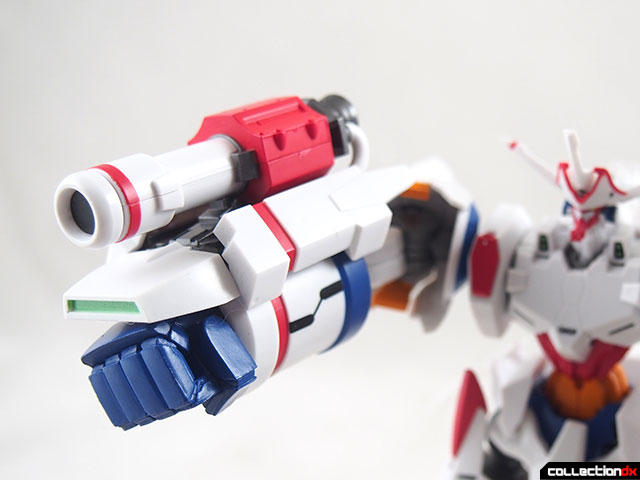 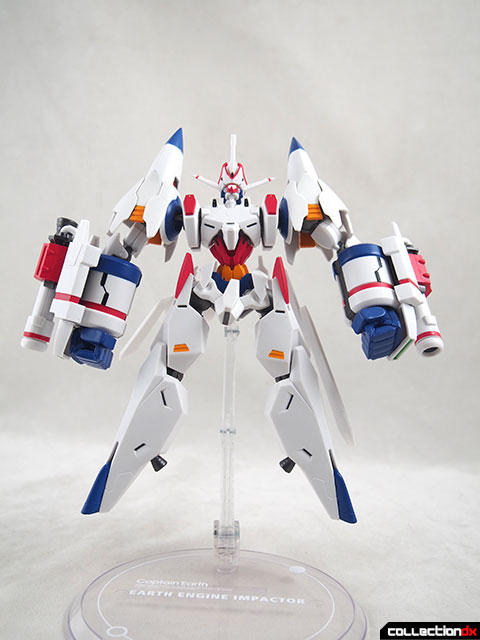 There are two chest vulcan cannons on the shoulders, and each need to be removed and replaced with open bank parts. This should have been on a hinge - I don't understand why they made this decision. 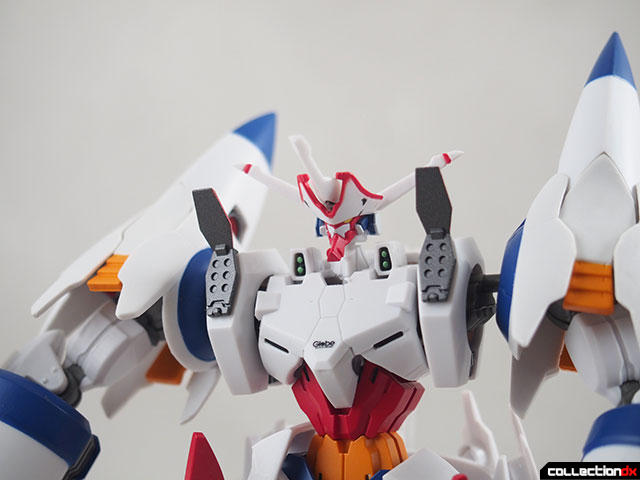 There's also a variant head that sports a cannon on the front that looks like the Wave Motion Gun from Yamato called the "Stigmatic Magnum". I haven't seen this used in the anime yet, so I don't know it's proper usage, but I believe it's used in the final episodes. 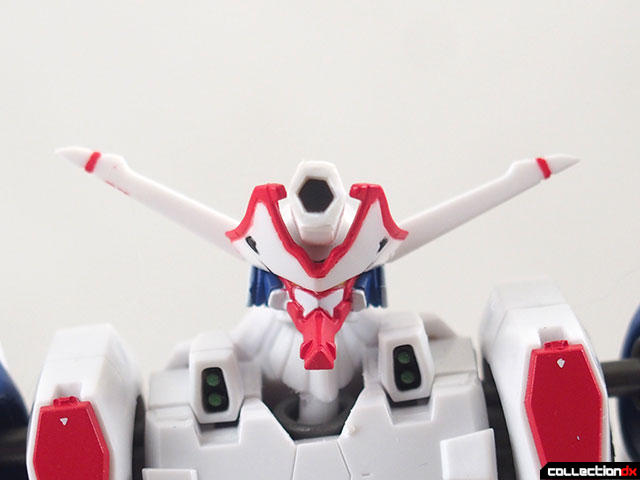 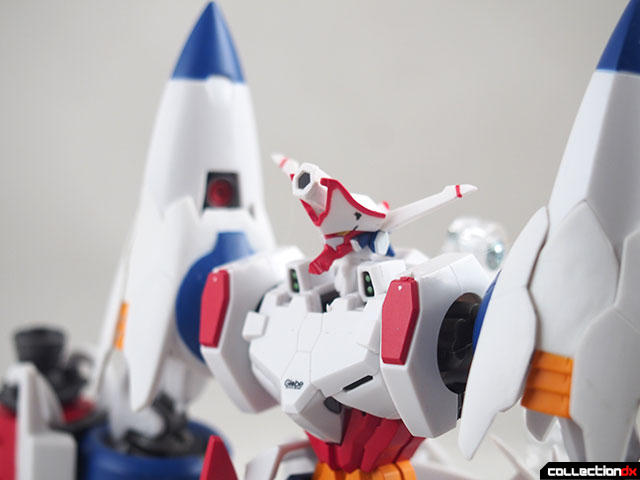 A stand adapter is included to mount the stand under the crotch as opposed to the back, giving it a bit more height in display. 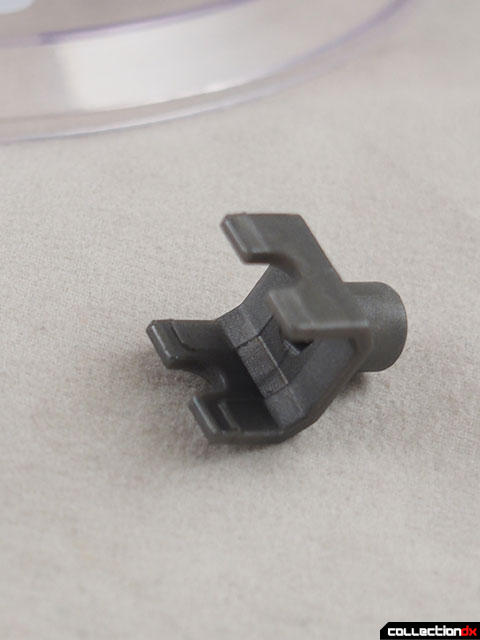 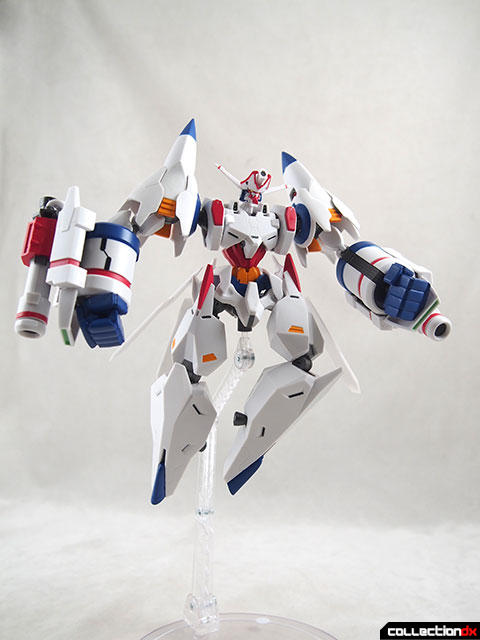 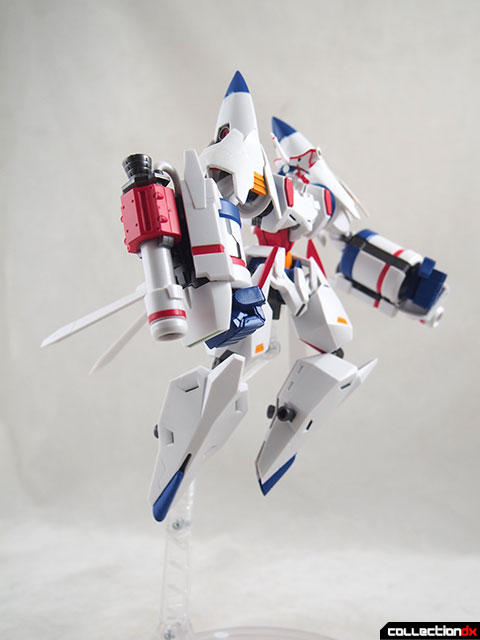 Overall, it's an unremarkable toy, with few accessories and no real gimmicks to speak of. However it is the only toy of the Earth Engine Impacter, so if you like the design this is your only option (aside of the Kotobukiya model kit) 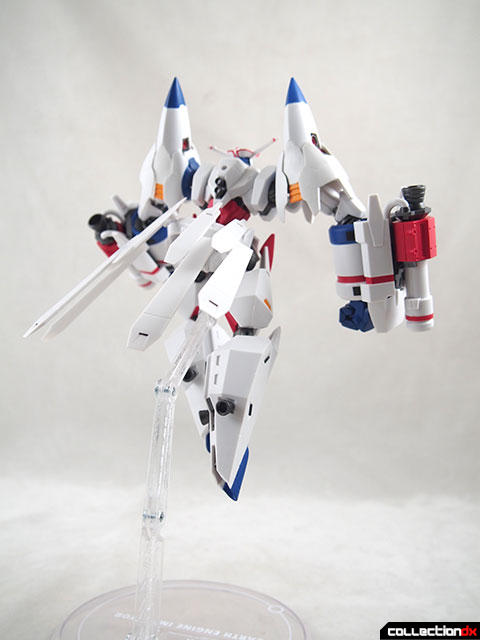 You can get your Variable Action Earth Impacter at HobbyLink Japan