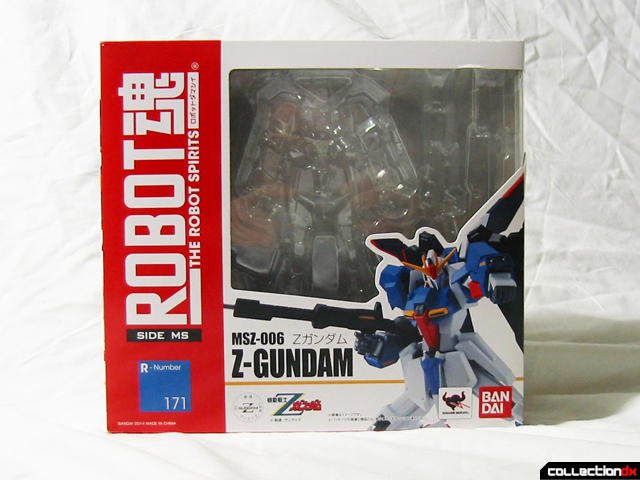 Piloted by the impulsive teenage genius Kamille Bidan (not a girls name), from the 1985 anime Mobile Suit Zeta Gundam, the MSZ-006 Zeta Gundam is the one of the most iconic Mobile Suits from the Gundam franchise. Being a 30 year old design, there have been many toys and models of the Zeta Gundam. Since Robot Damashii is Bandai’s current line for Gundam toys, it was inevitable that the Zeta Gundam would be introduced as well. 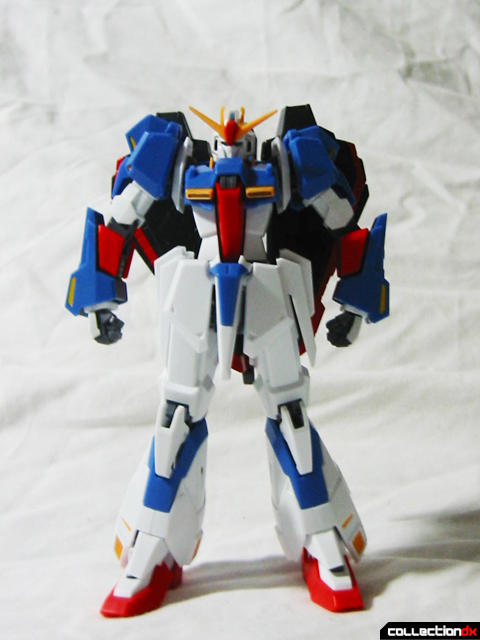 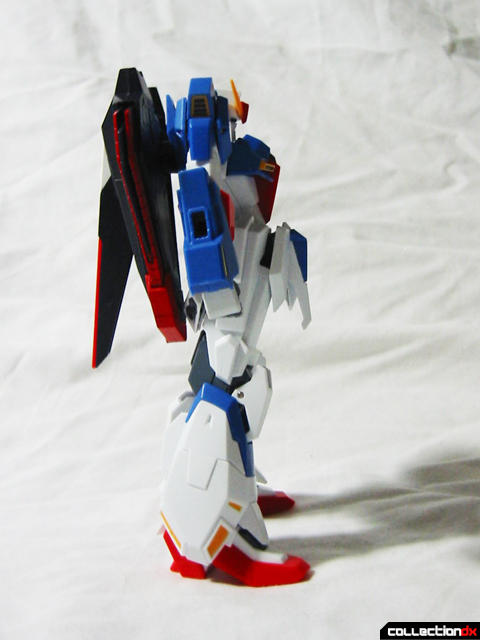 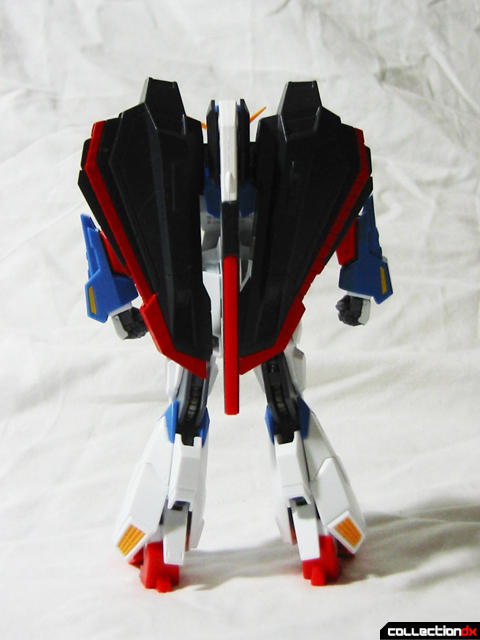 Zeta Gundam here stand at 5 inches and, while noticeably has more stylized proportions than the original anime design, the shins don't seem to be the same length as in the anime (I thought they were longer). Although the Zeta Gundam is known for being the first transformable Gundam, this toy doesn't turn into the Wave Rider mode (honestly, it’s not worth engineering such a complicated transformation on something this small). 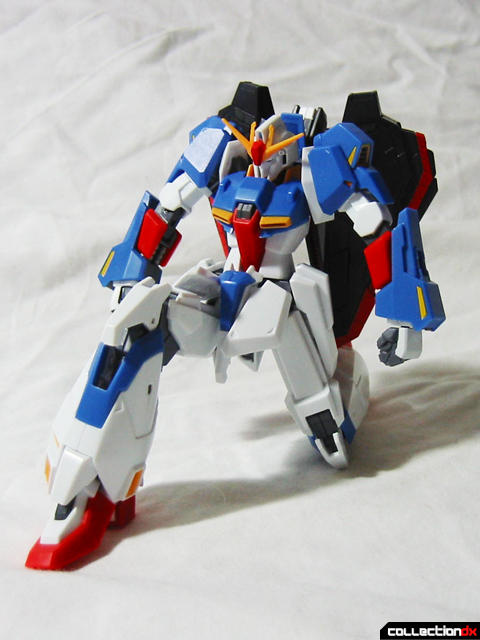 Articulation is excellent. Double jointed elbows, double jointed knees that collapse at the back when bent, feet that bend inward, toes that point down. Basically, all that’s expected on current RD releases. Only downside is that the waist is limited due to back skirt armor getting in the way. 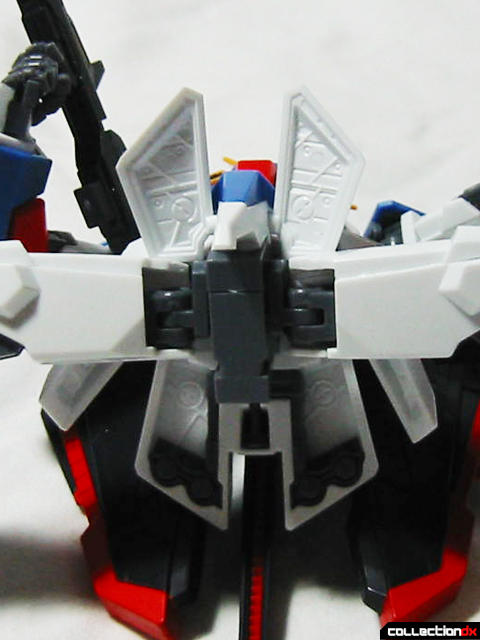 Details are sharp and crisp. Check out the panel lines underneath the skirt armor. I also like that the vents on the legs are molded in yellow plastic. The red plastic part on the arm has the tendency to pop off if handled wrongly. Do be careful with the V-fin. It’s molded in hard plastic and an extra isn't given. 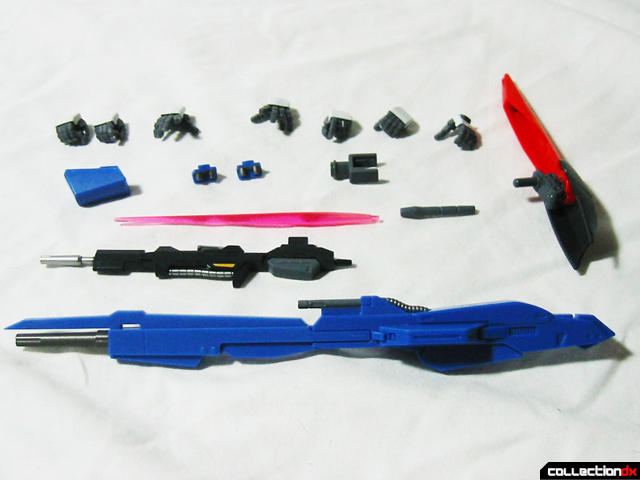 Accessories are the following: Four pairs of hands (closed fist, pair for guns, pair for beam sabers, open palm and and extra hand for gripping the guns which I'll get into later), open panels arms, a grenade launcher pack (just one Bandai?), beam saber and holder, beam rifle, large cannon known as the Hyper Mega Launcher, and shield plus an attachment for stand. 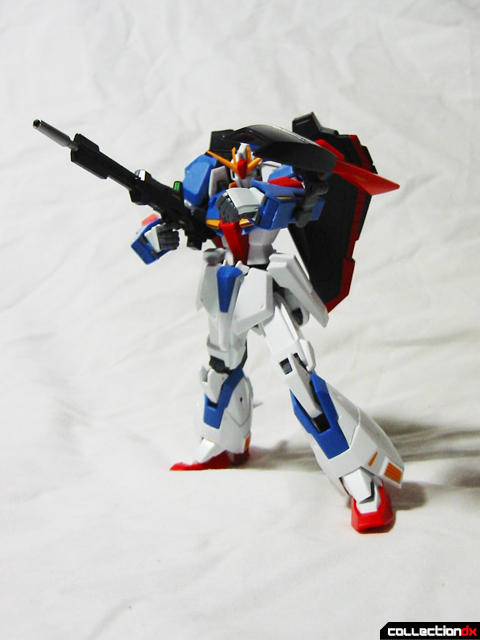 The beam rifle fits snugly in its hand. Oddly, the handle is on a ball joint, which can pop out when you take it out of the hand. 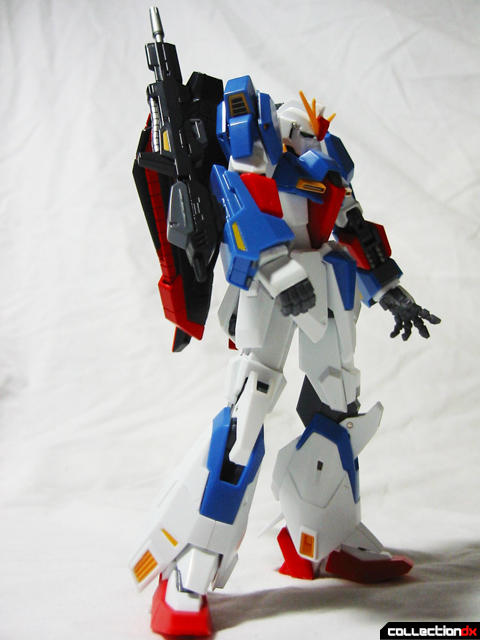 It can also fit nicely on the arm as so. 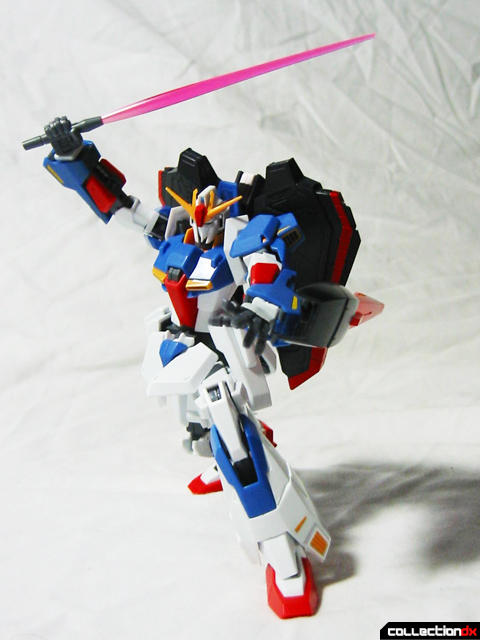 Beam saber holds well and has a nice silver spray on the bottom of the beam to give the effect of gradient brightness. Just one beam saber is included. Also the saber hilt cannot store anywhere (it’s meant to store in the hip armor but it doesn't do that on this toy). 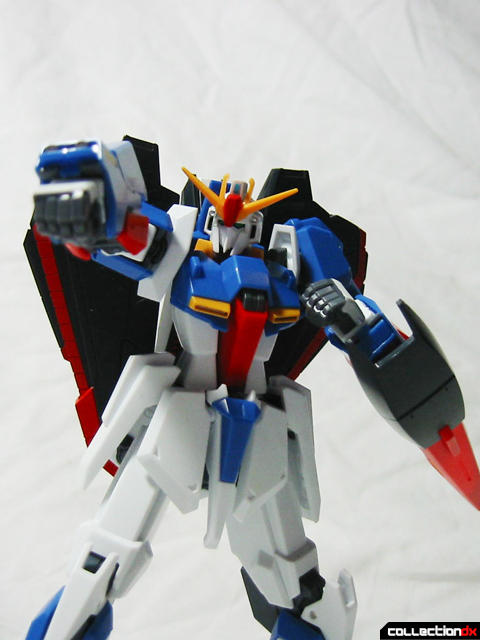 To do grenade launcher, you switch the closed panel with the open one. Oddly, while there’s a pair of open panels for arms, it only comes with one grenade pack to put on the arm. 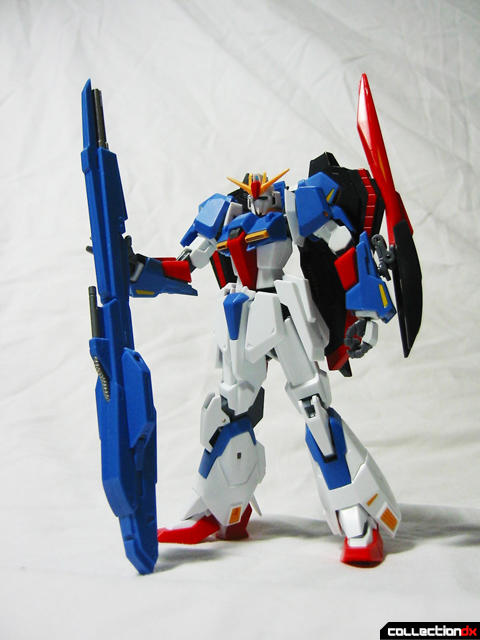 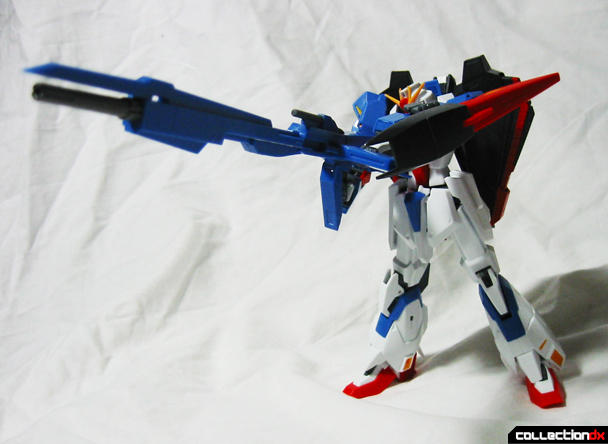 Final and largest weapon is the Hyper Mega Launcher. Previous versions of this design have had trouble holding this large blue cannon. Not this one. In fact, it can hold it with just one arm. 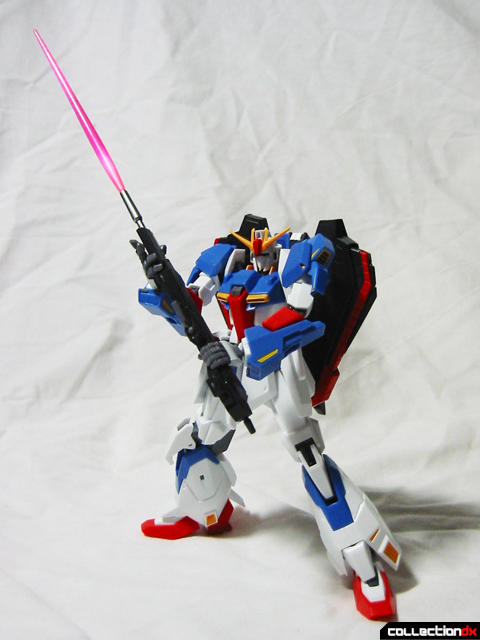 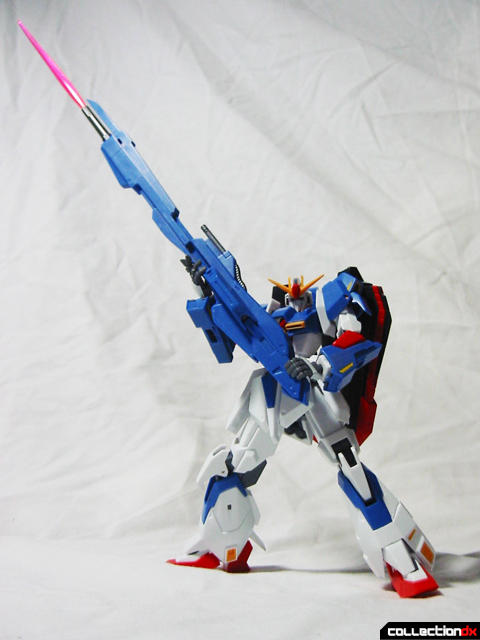 Another neat feature is the beam can plug onto the nozzle of either the beam rifle or the hyper mega launcher, making a large beam nagata. There’s an extra hand to hold the base of the weapons. 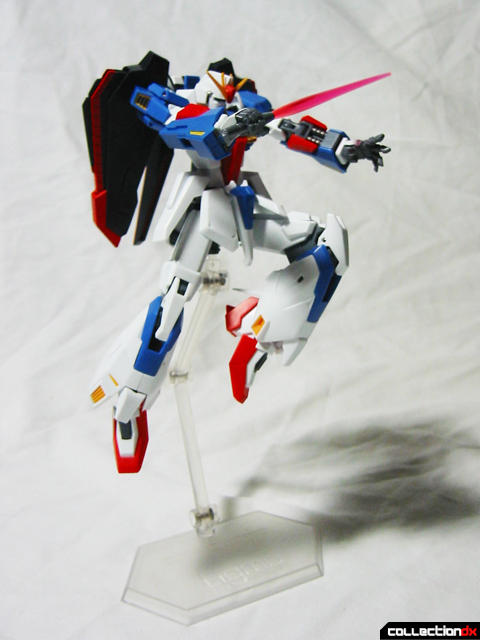 Of course you can't forget about the stand attachment. I prefer using a figma stand for these shots. 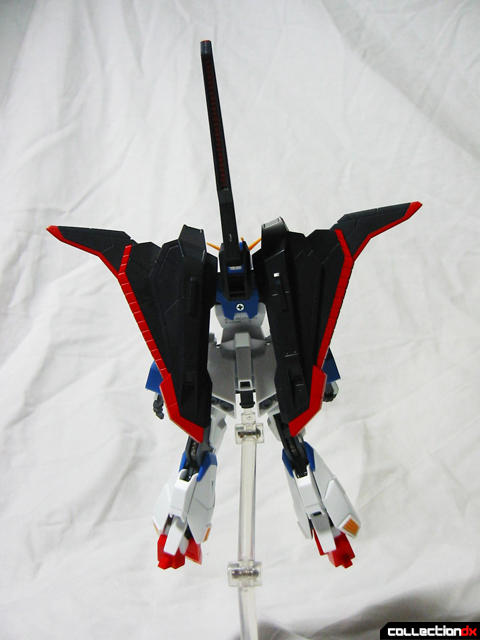 As I said before that while it doesn't transform, the wings can open up on the back. It’s a bit difficult to pry the fins out and you might need a tool. 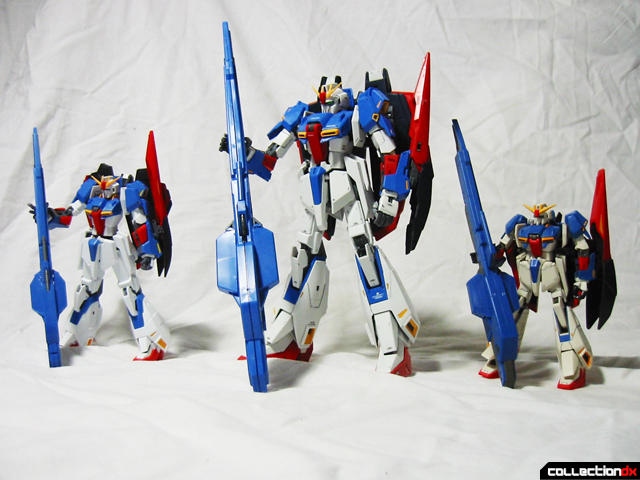 Finally, a comparison pic of all the Zeta Gundam figures/models I own (RD, MG 2.0 and MSIA 2.0). I used to own the transformable chogokin but that wasn't that good of a figure anyway. Notice how oversized the weapons and shield are on the MSIA version. 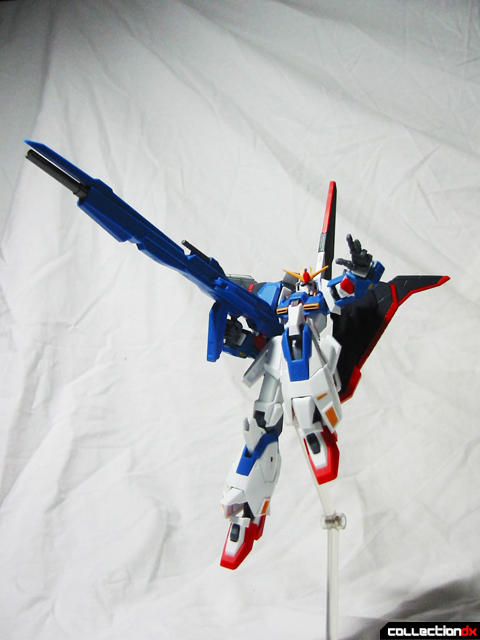 Overall this is an excellent rendition of an iconic 80’s Gundam design. I am glad to see Bandai pull off one of my favorite Mobile Suit designs. Choosing to make the figure not transformable was smart and would have lend to stability issues (like on the MSIA 2.0).

2 comments posted
The Zeta Gundam made a very

The Zeta Gundam made a very brief appearance in the Anime "Machine Robo: Revenge of Cronos" where it was knocked out of the sky by a large monster, transformed, and then swiftly destroyed by flowing lava.

Yes, I remember that.