Continuing on from my review of figma Racing Miku, here is the story of Greenlilocks and the Three Bikes. 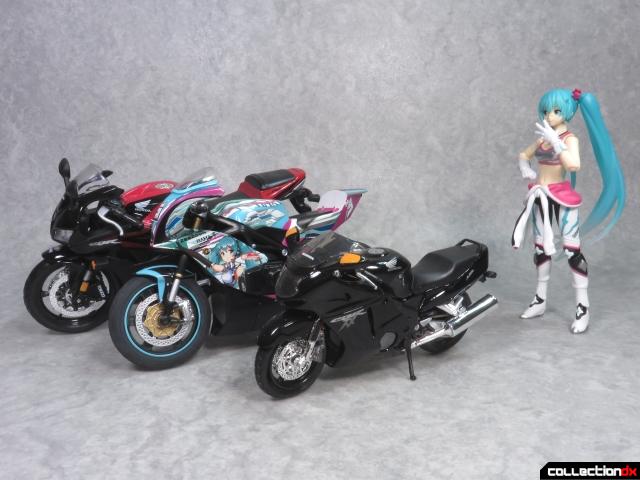 Greenlilocks had wandered into the land of gray, where she happened upon three motorcycles. 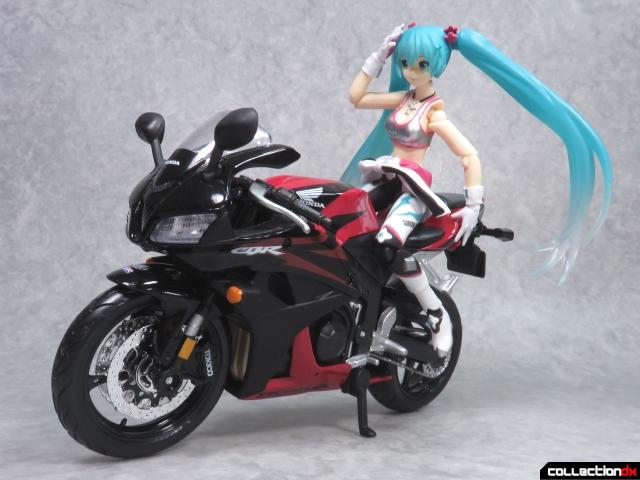 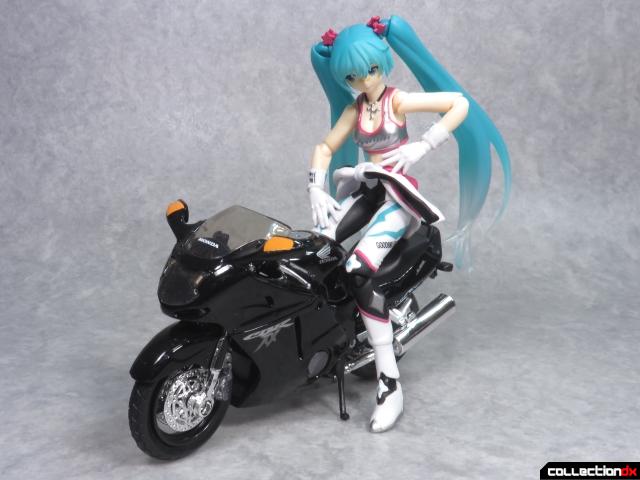 While the Maisto 1/18 scale bike was tooooooooo small! 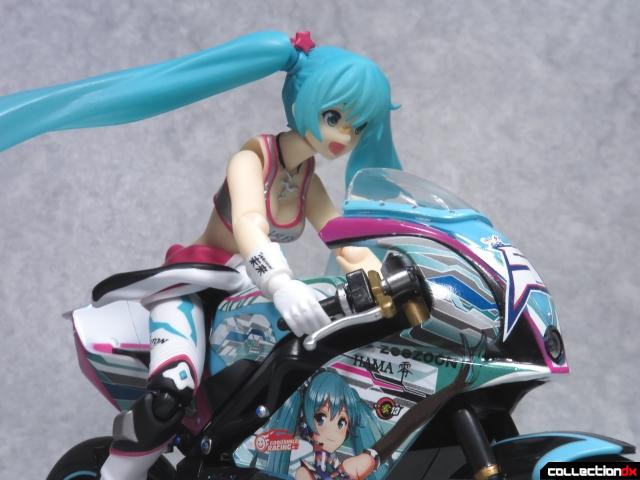 When Greenlilocks sat on the Spride.06 - TT-Zero 13, she happily exclaimed, "Now this is juuuuuuust right! 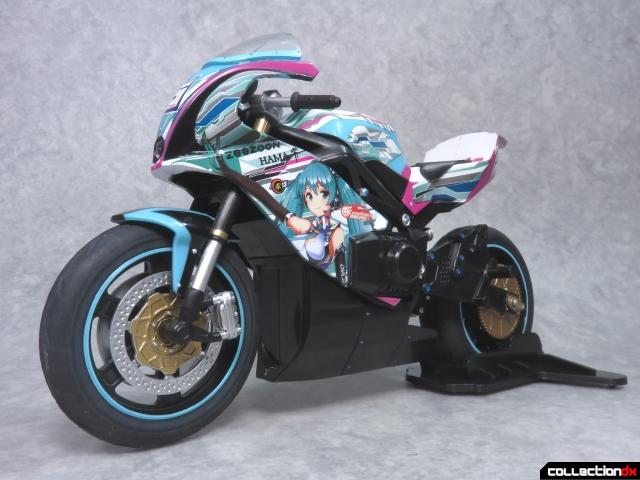 The 2013 Racing Miku EV: MIRAI figure is meant to be paired up with this particular motorcycle. This figma-scale bike is a near-perfect recreation of the actual TT-Zero 13, though with most of its sponsor markings relegated to an included decal sheet. While the bike does not contain any diecast metal like a comparable Maisto piece, it does still have rubber tires (which have an odd odor to them). The TT-Zero 13 measures a little under six inches long from wheel to wheel. 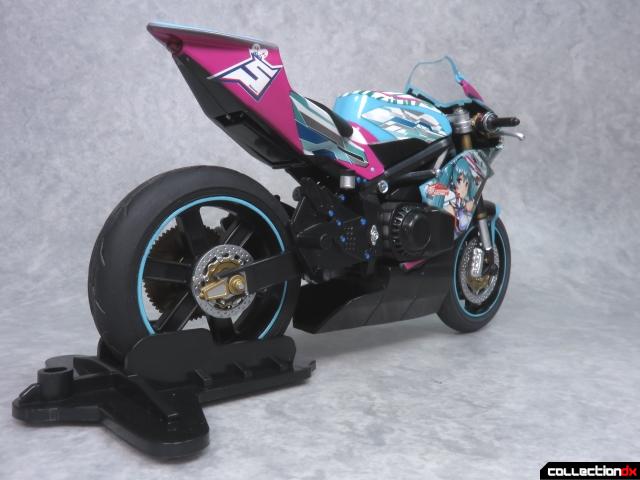 You may have noticed that the bike lacks exhaust pipes, but this is because the actual TT-Zero 13 is an electric vehicle. It also does not have a kickstand, so FREEing has included an ugly but functional cradle for the rear wheel. I wish the cradle piece was clear, like with S.H. Figuarts bikes. 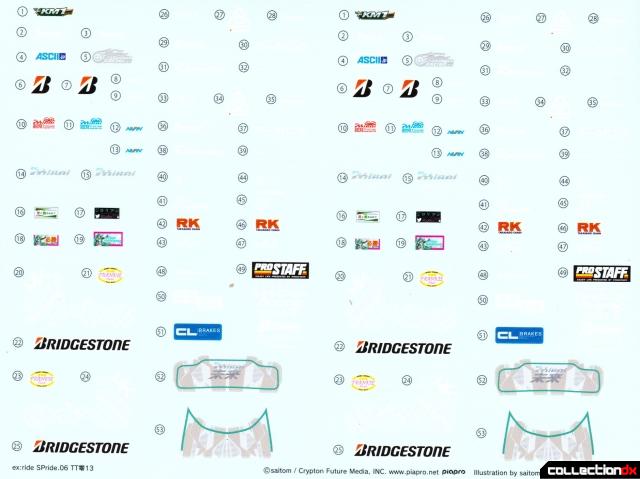 Here is the aforementioned water slide decal sheet. These are mostly sponsor logos and text, so you are not really missing out if you choose to leave them unapplied. 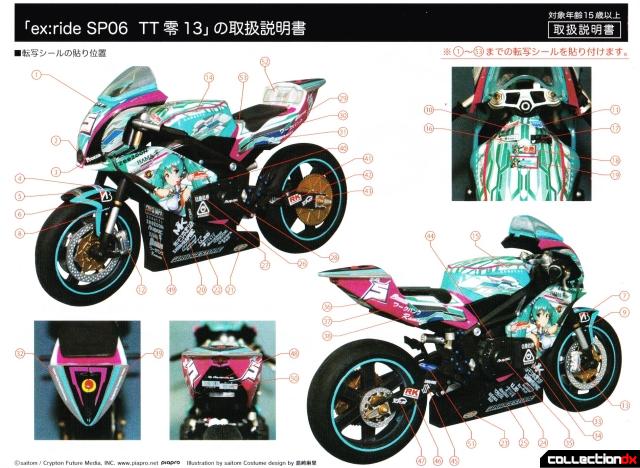 For reference, here is the decal guide from the instructions. 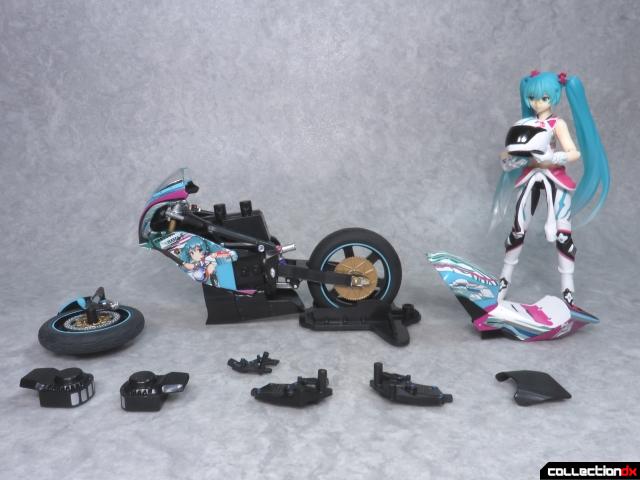 To help facilitate applying all these markings, the TT-Zero 13 can be partially disassembled. Its front forks, seat, upper frame, engine cowlings, and foot rests are removable. On my copy the front wheel assembly is particularly tough to plug in, as one of the three connecting pegs seems a bit too tight. I'm not sure if this is a common issue for these pieces, but please be aware. 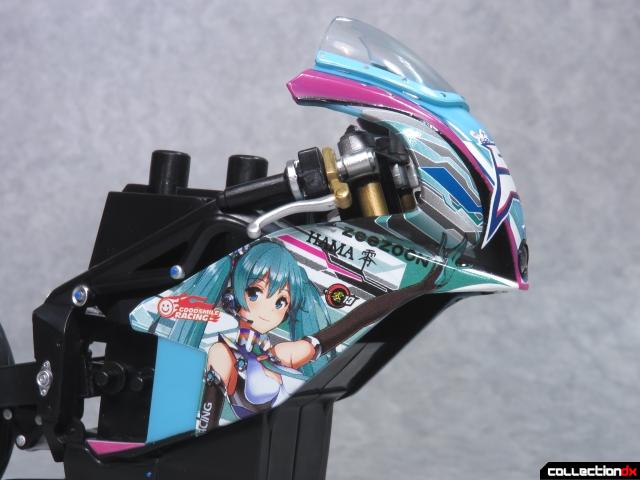 Even without the additional decals, the bike is quite gorgeous, with Itasha style markings featuring Hatsune Miku in her 2013 Race Queen outfit. 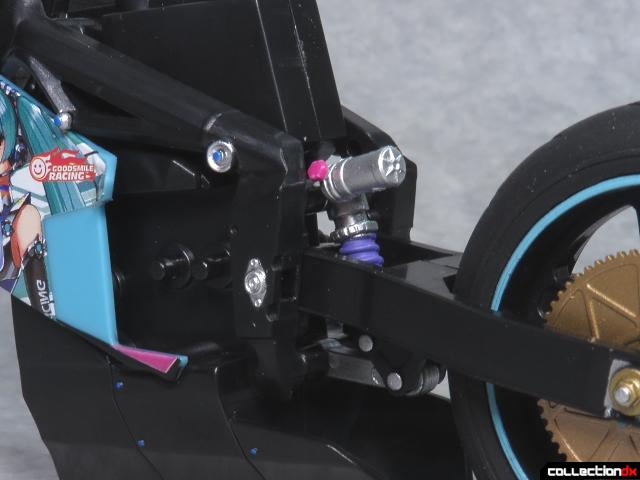 While it's not the most intricate toy motorcycle, FREEing made sure everything you should see on the bike's exterior is present. For example, there is a (non-working) suspension nestled in the main body. 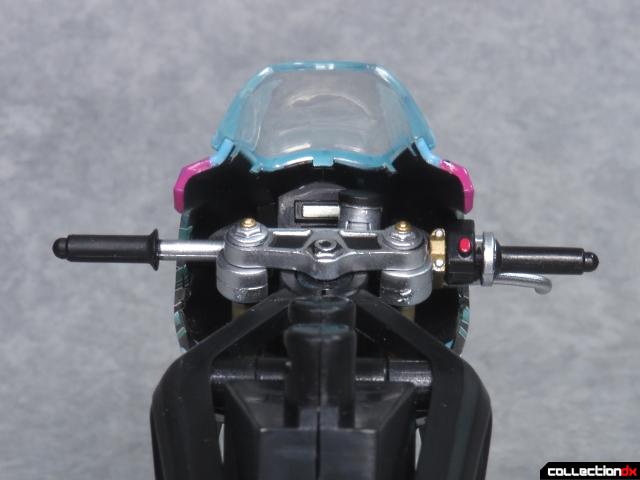 Likewise, the handlebars and console have a good level of detail. Turning the handles will move the front forks. Also, the individual handles can pivot in and out so Miku can more easily grip them. 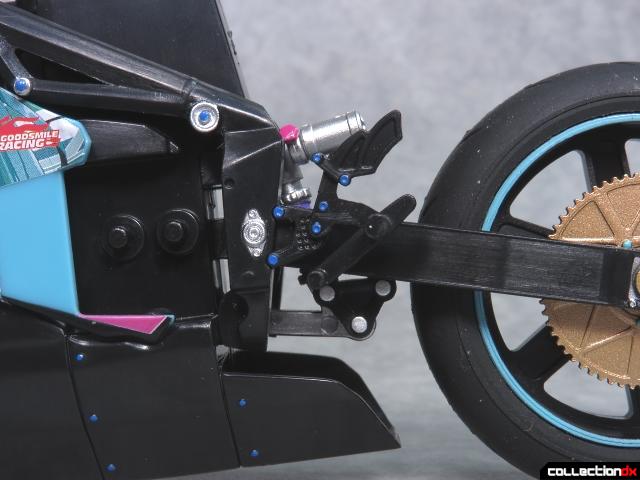 By default, the TT-Zero 13 has a small footrest installed on the left side. Oddly enough, this piece has to be swapped out in order for Miku to ride the bike. 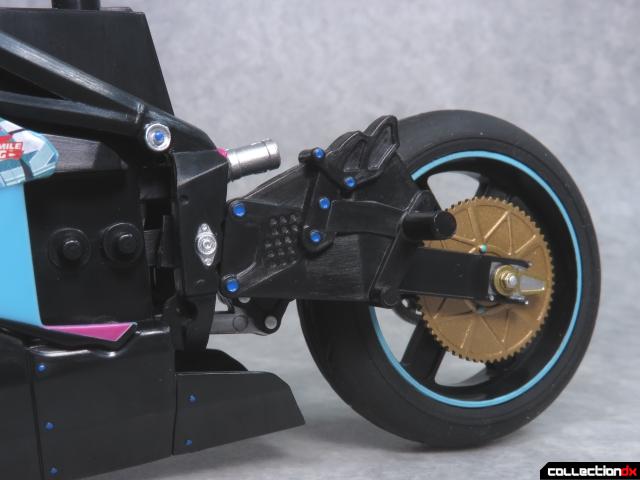 When it's time for the rider to get on her ride, the small footrest is set aside and replaced with a pair of larger ones. 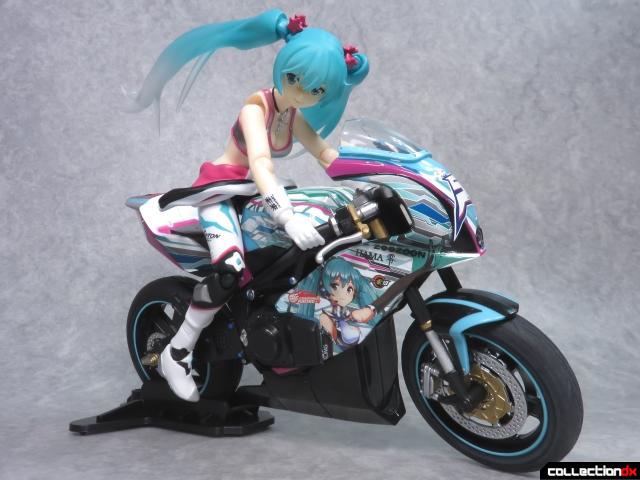 To get Miku mounted on her motorcycle, you basically scrunch up her legs and torso until she is riding with her keister above the seat. She doesn't quite have the flexibility to sit on the TT-Zero 13 like an actual rider would, mostly due to the soft plastic "shorts" that make up the top part of her suit's pants. 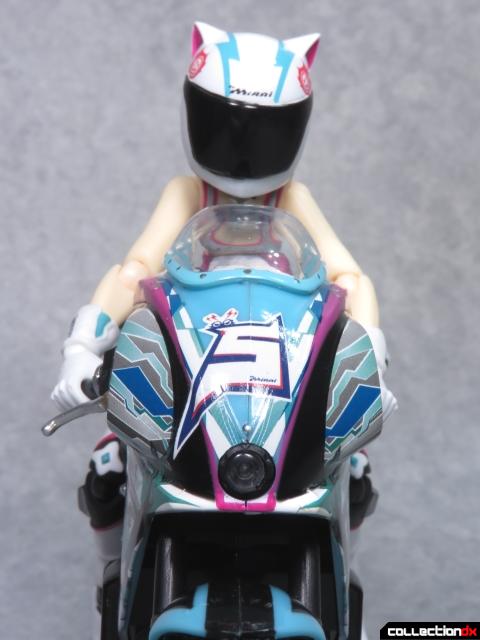 Still, Miku looks quite legit on her machine and is ready to be a real Racing Hero(ine). 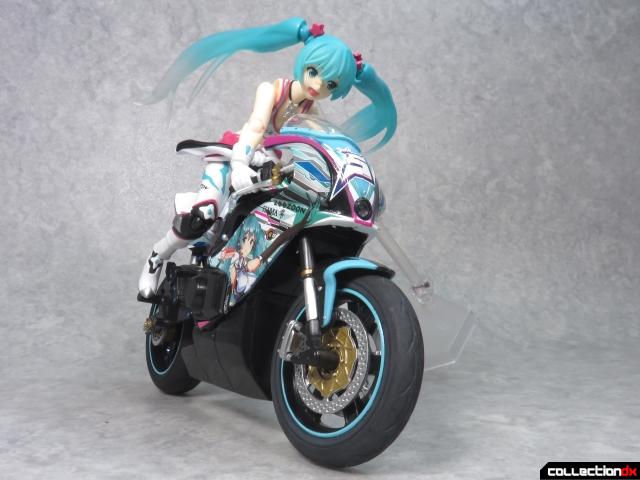 To recreate driving poses with the bike, you have to use Miku's stand to prop everything up. 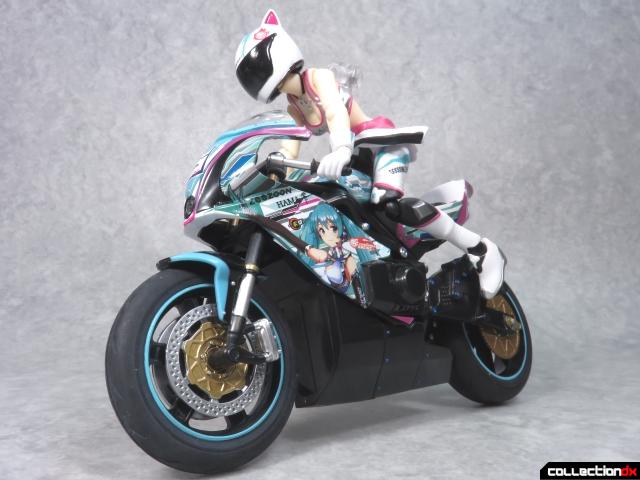 It's a bit weird, but having the stand attached to Miku's back works quite well, even when leaning in for a turn. 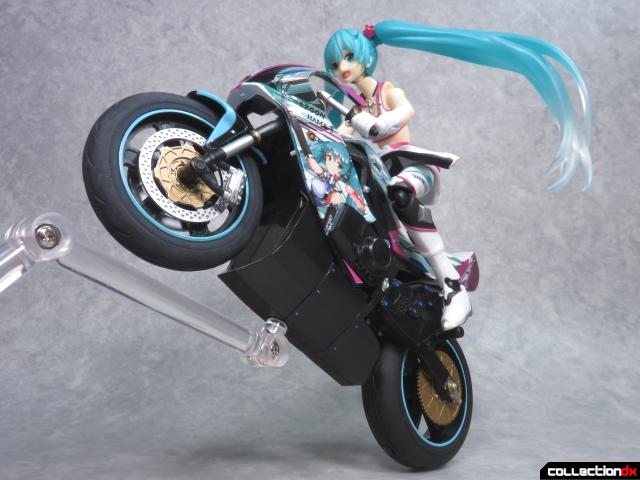 There is a hole on the bike for attaching the stand directly, but it is located on the very bottom of the TT-Zero 13. As such, you can really only use it for poses where Miku is popping a wicked wheelie, as the stand's arm is too thick to let both tires touch the ground. 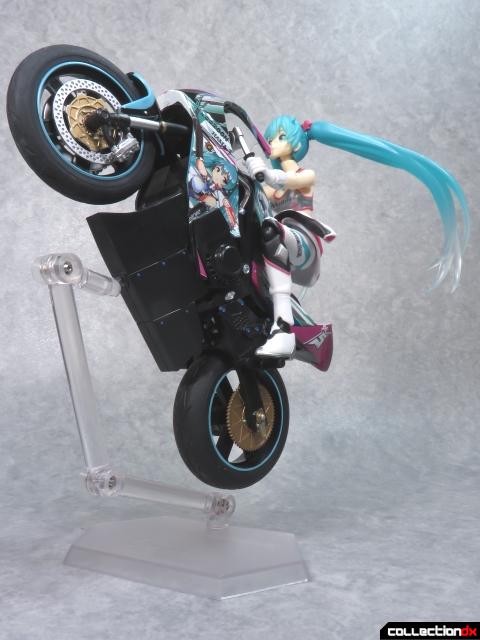 One good thing about this setup is that you can actually have Miku's figma stand hold both her and the bike up in the air. However, if you wish to use a sturdier display stand, both rider and ride can use a Tamashii Stage or any other armature with the same size peg. 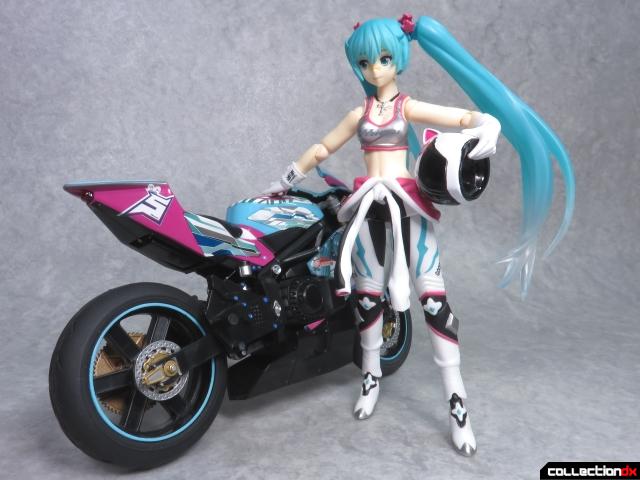 The lack of a kickstand does make it difficult to have Miku interact with the bike without using the wheel cradle, but I made do with her figma stand. 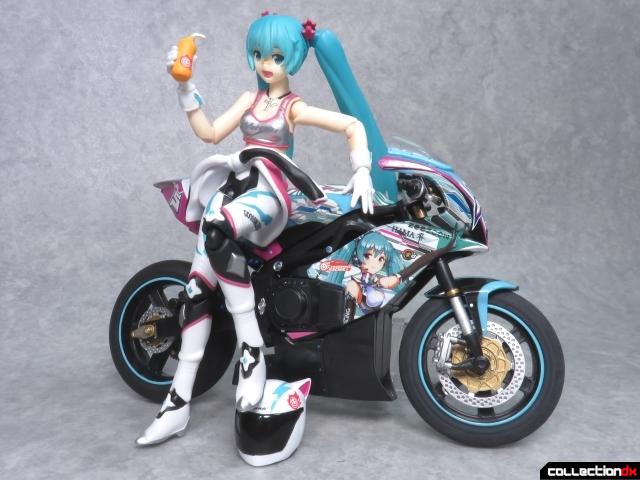 With water bottle in hand, Miku is ready to relax after a tough race.

While the ex:ride TT-Zero 13 is not the most feature-filled figure scale motorcycle, it is an essential part of delivering the full experience with figma Racing Miku. Since she doesn't really work with off the shelf toy bikes (or at least, not with 1:12 or 1:18 ones), getting her personal machine is the best way to go. The only downside to it is its price: 5,800 yen for what is just a good (perhaps a bit perfunctory) toy motorcycle. For just a little more, FREEing was offering an entire one-person truck! Still, I can understand the high cost of the TT-Zero 13, because of the intricate Itasha style artwork on its body, and the need to get clearance to use the official sponsor logos for the decals. Overall, I'm happy to finally have Racing Miku's motorcycle, as it completes her look as a cool bike-ridin' lady.

There's kind of a sad footnote to this bike. During the 2013 Isle of Man TT Team Mirai's rider, Yoshinari Matsushita, was killed in a crash during qualifying for a different event. 10-time Man TT champion Ian Lougher would end up competing on the TT Zero 13 out of respect for his friend Matsushita.