This review sample provided by HobbyLink Japan! Get yours there today!

Nothing quite like a Leiji Matsumoto anime.
If depressing space operas are your cup of tea, then Yamato and Galaxy Express 999 are for you!

This also includes Space Pirate Captain Harlock. While I’ve only seen the feature film Arcadia of my Youth (a stunning visual and directorial masterpiece), even it falls within the purviews of “no, my eyes are just leaking, that’s all” story telling that Matsumoto and his subsequent anime directors bring to the screen time and time again.

With this, Bandai gives us the GX-67 Space Pirate Battleship Arcadia from the Toei animated series Space Pirate Captain Harlock. An entrance in their Soul of Chogokin line, this figure is filled with metal and packed with detail, an excellent combo. 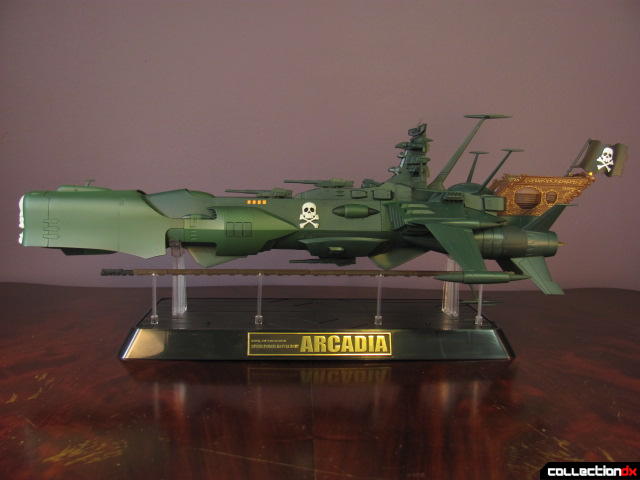 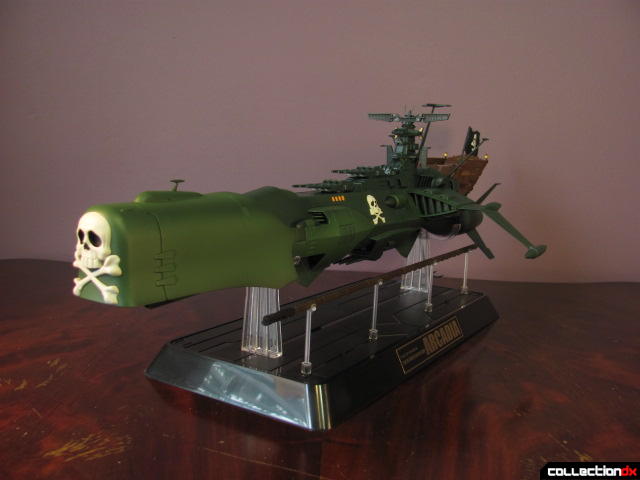 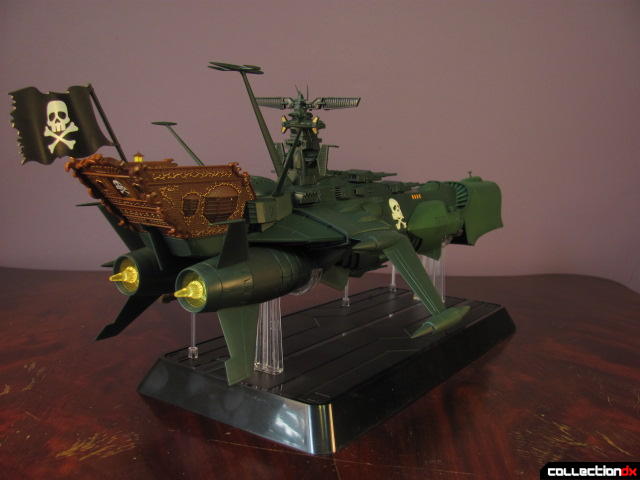 The sculpt is spot on to the movie and series. Every groove, vent, slat--you name it--is meticulously replicated; this ship almost feels like it could actually fly. It even LOOKS heavy (which is proven when you lift the monstrosity). The colors are matte and provide little sheen, something that makes me think of the cel colors but not as flat as they are there; this provides a classic look but also a great piece to display. The paint—for what little there is—is expertly applied with no overspray. 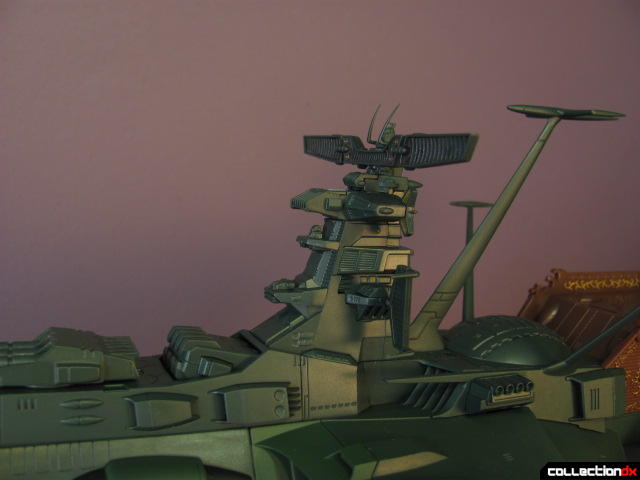 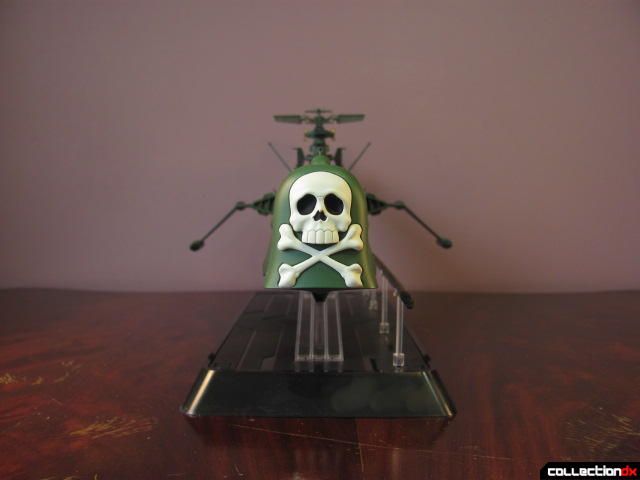 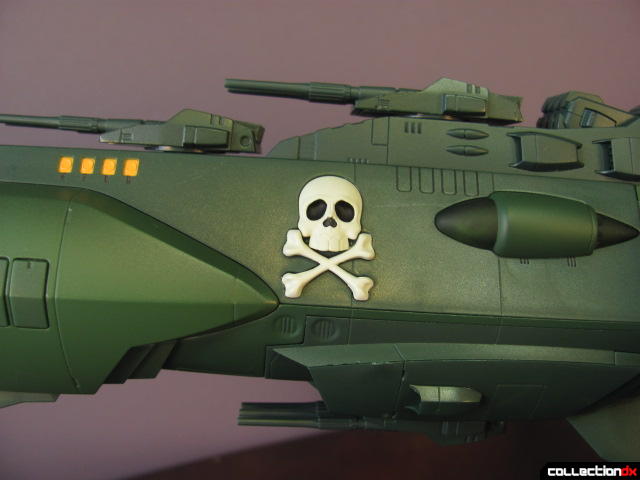 Seriously, nothing is too small to have been sculpted and added to this figure: 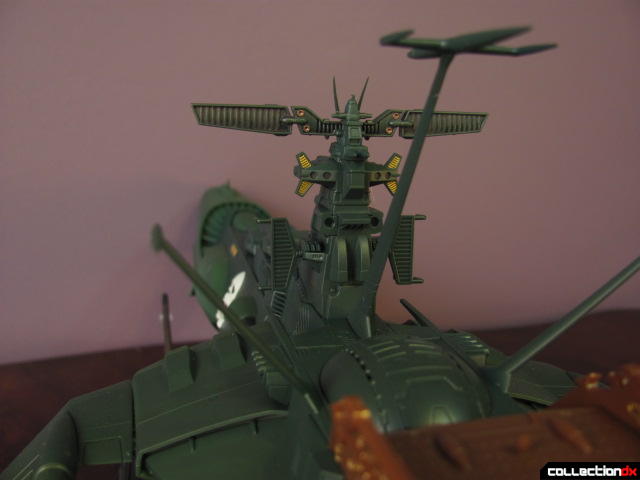 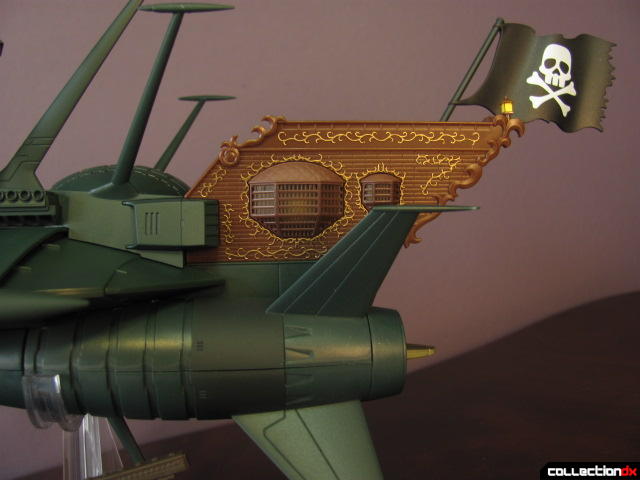 There isn’t so much going on, however, that the design looks busy or crowded; it’s just pleasant and really… just good looking. There’s a lot to say about a mechanical design such as this.

This figure isn’t without articulation. The triple pulsar cannons can be turned 360 degrees on top and bottom and each one’s cannons can be separately pivoted up and down. The missile pod nearer the bridge can also be moved up and down. Much like a space ship, however, nothing else moves. 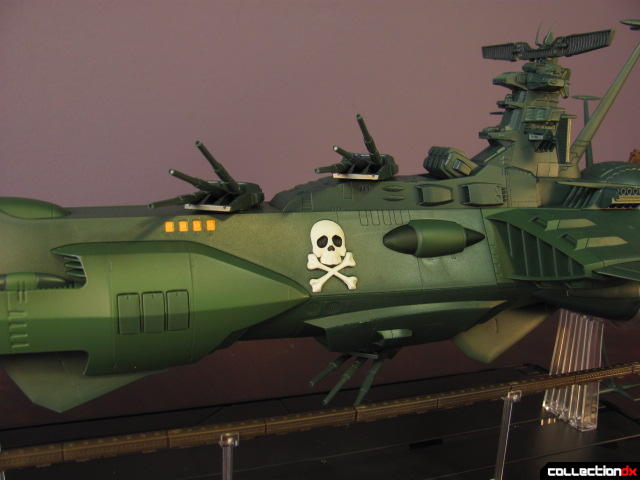 At its shortest height, the Arcadia is about 2.5 inches tall while at its highest, 5 inches. The length is a whopping 18 inches and it weighs just over 2 POUNDS. This is a mega sized toy and I wouldn’t have it any other way, honestly. The Arcadia is such a demanding ship that it deserves it. 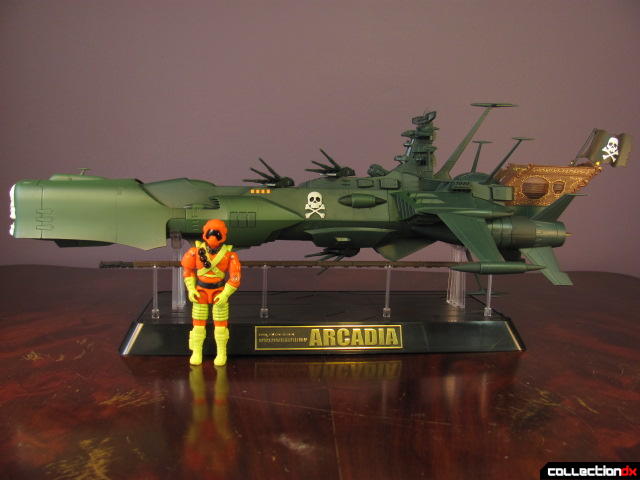 Ice Cream Soldier wouldn’t have it any other way, either: 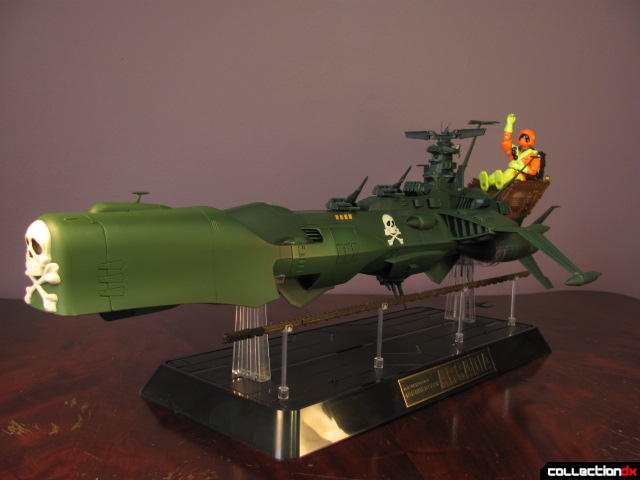 The base is your standard, gold printed SoC base. Really, no SoC is complete without it and it just looks ravishing. 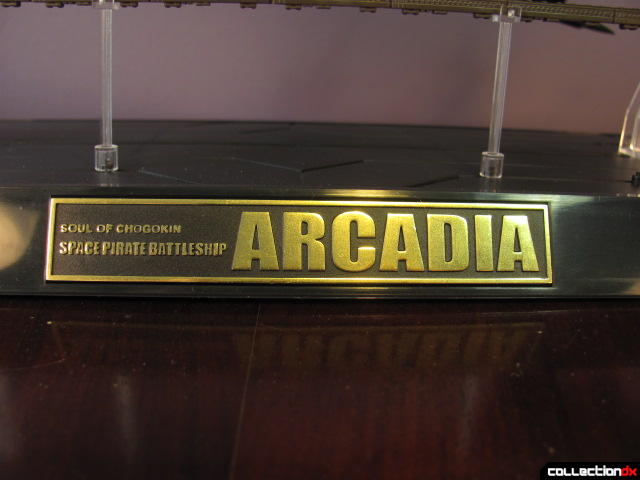 The gold lettering is a great contrast to the bleak and matte black around it and just makes the figure feel display ready and important. The stand pieces have secure locking points to connect to the Arcadia and have two options: level and TAKE OFF: 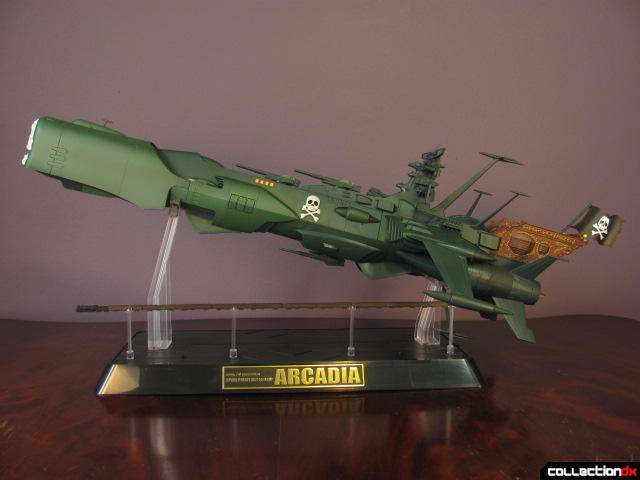 The take off display option is my favorite as it brings a dynamic aura to the figure which couldn’t be achieved through much else (it being a ship and all). It just looks great coming right at’cha! 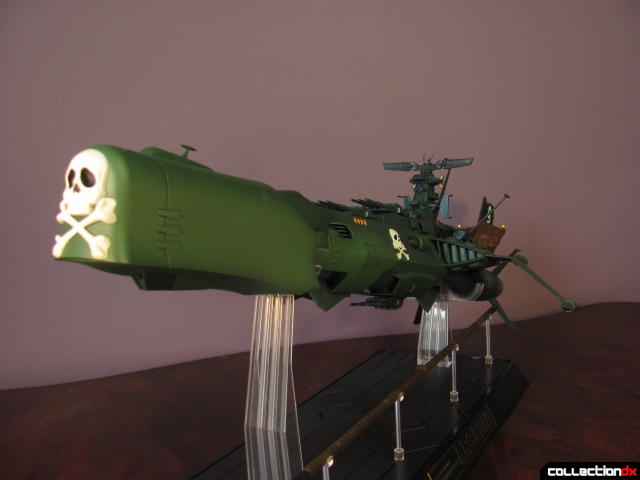 The Galaxy Express 999 is a wonderful treat in this package. While I’m almost positive Galaxy Express 999 has nothing to do with Harlock—which has me questioning its inclusion—it’s just great to see and to have alongside the Arcadia. It’s very well sculpted and detailed but is missing any trace of paint.
Still. 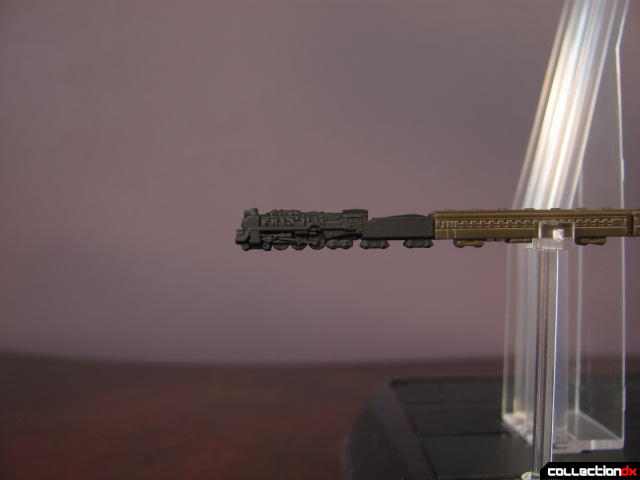 Finally, the remote control.
With a flip of the switch on the box and a flip of another hidden switch underneath the Arcadia, you can activate a cavalcade of sounds from the Arcadia! 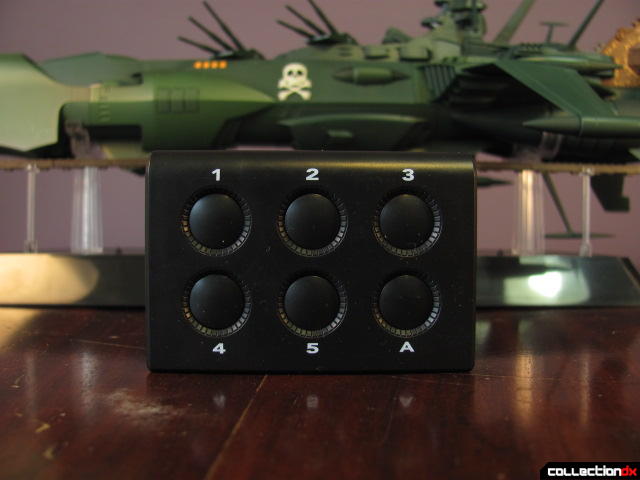 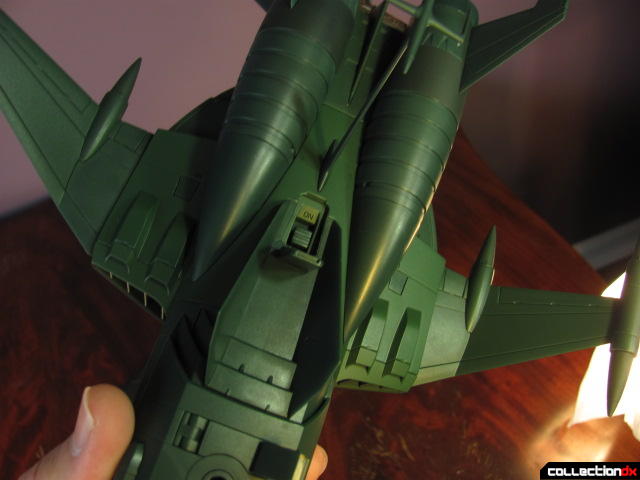 There are eight sounds that the Arcadia can play:
- x3 BGM from the original anime
- x5 Arcadia sound effects

Below is a smattering of videos for each set of sounds:

The sound quality is pretty good and clear; I can definitely tell what I’m hearing and it isn’t too tinny or empty. I honestly wasn’t expecting electronics and this was a pleasant surprise. Along with sounds, the Arcadia also sports lights! The bridge glows green and the cabin and engines glow an eerie yellow (with the engines fluctuating to red and back for TAKE OFF AKSHUN). 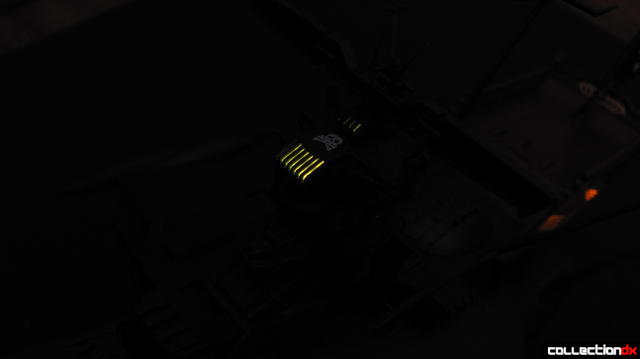 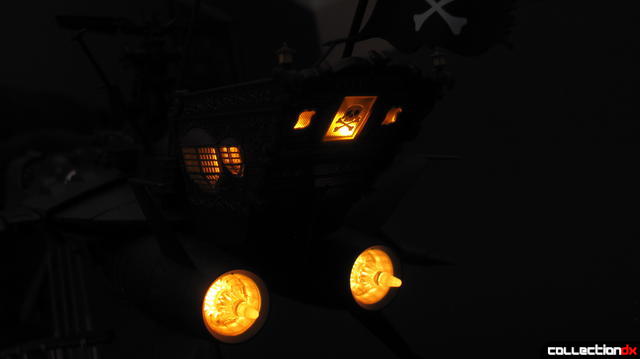 In conclusion, yeah, Bandai hits it out of the park with this.
It’s heavy; it’s gorgeous; it has LIGHTZ and SOWND.
Do yourself a favor and pick this up should it tickle your fancy; you’ll not be disappointed. 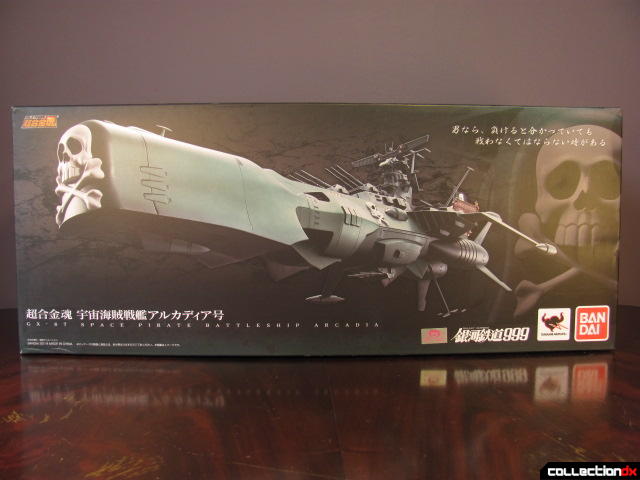 This review sample provided by HobbyLink Japan! Get yours there today!

You would be surprised just how many crossovers between Captain Harlock and Galaxy Express 999 there are.

The Galaxy Express movies would be a good starting point. In fact, I think that's where this ship makes it's animated debut.

This! The Leiji'verse is a strange place that more or less co exists and crosses over itself in ways that often seemingly run counter to the primary narratives. There are indications of some connection between Galaxy Express 999's Maetel and Harlock's Emereldas. The gun Matel gives Tetsuro is one of the Creations of Tochiro, the builder of Harlock's Arcadia. Etc. there are even some scenes in the GE999 Manga that show the Arcadia, Yamato and Andromeda in port side by side while the GE999 flies by. Harlock's and GE999 are more solid than the usual cameos as he and Emereldas play major roles in the GE999 movies.

Still, thanks for that, both of you.

The music that this toy plays is all from the first Galaxy Express movie. I was kind of disappointed with that really, I much preferred the cues from SSX - although they were composed by Shunsuke Kikuchi and I'd imagine there was some problems with licensing the music of a big name composer like him.

So that's why I couldn't place any of the music, ha!
I was listening to the wrong OST the whole time.

While I can't claim to be a much of Galaxy Express or Herlock fan (due to opportunities to watch rather than taste), I do love the SoC line of ships so when I saw the Arcadia up for auction on Ebay, I decided to go for it. The box was slightly damaged, so I ended up getting this for <$200 including shipping, which is a huge bargain in my thinking.

Anyway, once I got it out of the box, I couldn't have been more pleased. The review is spot on in terms of heft and detail. My only complaints are that the length makes it difficult to position on the shelf. The Jolly Roger located at the stern of the boat adds another two-ish inches to the length. Also, when assembling be sure the bottom antenna is securely in place. It is precariously positioned behind the rear pillar of the stand (also putting it at risk for bending), so it comes off easily when you remove or replace it unless securely locked in.

This is relatively minor stuff, though, so if you're of fan of Matsumoto, Galaxy Express, Captain Herlock or just generally love bad ass replicas of spacecraft, then I highly advise you pick this up.

Does anyone know how this ship compares in terms of size and scale to the other Arcadia replicas such as those produced by Aoshima, Taito, or in Leiji's Space Battle Ship Collection?