Bishoujo Senshi Sailor Moon is the anime series that popularized the Magical Girl genre and is also a staple of American TV for those who grew up in the 90s. Sailor Moon featured the titular Sailor Moon fighting alongside her fellow female(and sometimes male) pretty soldiers. Sailor Moon took a while to grow into her role as the leader of the Sailor Senshi. Luckily for her, the team featured several strong, indpendant characters who could step in when Sailor Moon needed help taking down the monster of the week.

One of the strongest-willed characters in Sailor Moon is Makoto Kino, Sailor Jupiter.  Having to taken care of herself from a very young age, Makoto developed a tough personality that made her quite the tomboy. Despite her tall stature and boyish qualities, Makoto dreamed of nothing more than settling down and becoming an average housewife. 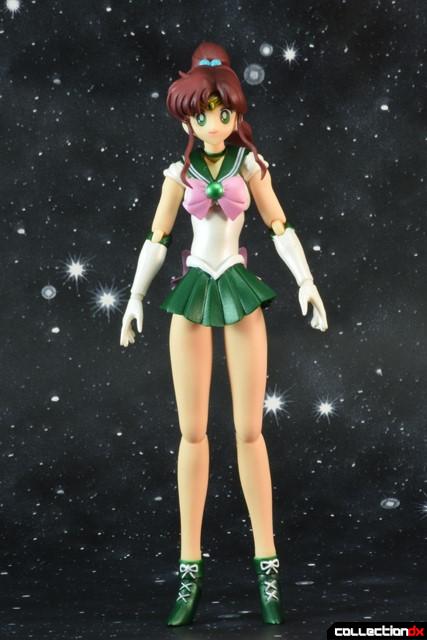 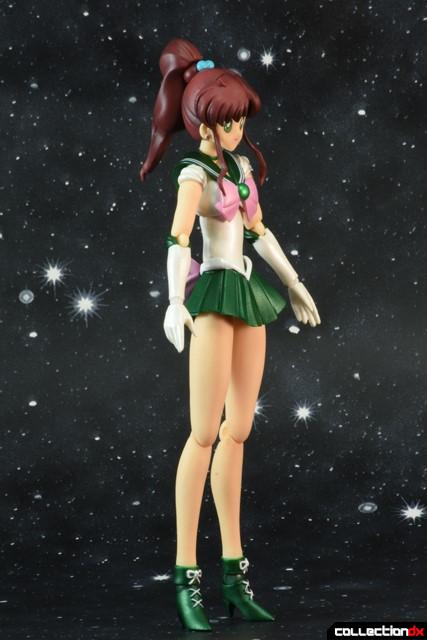 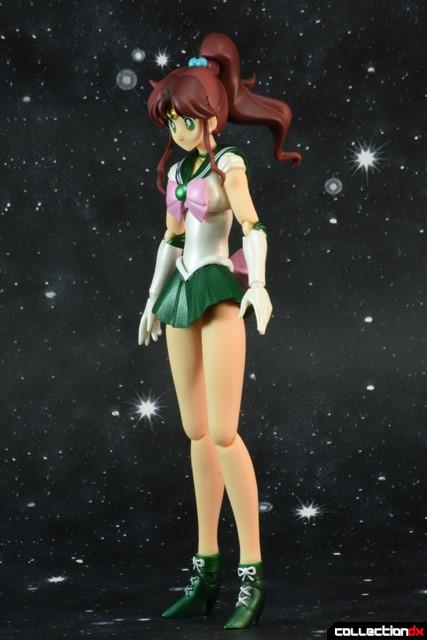 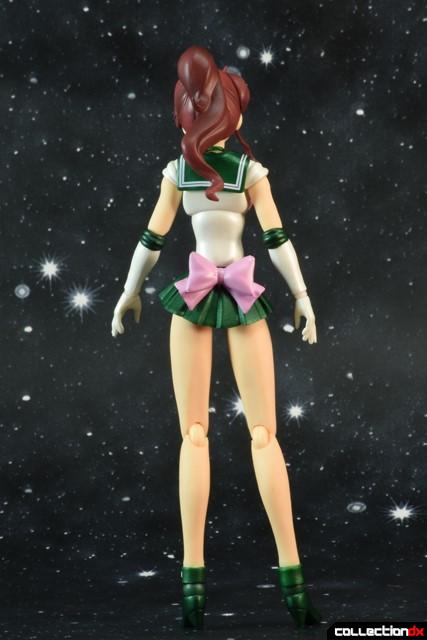 The long-limbed feminine body of Sailor Jupiter is very nicely represented in toy form. So far, I think she has the best sculpt of the Sailor Senshi that I have had the pleasure of reviewing.

However, I would have liked it if Bandai made her facial features a bit more pronounced.  Her nose and the hash marks under her eyes can often blend in with the rest of the face. 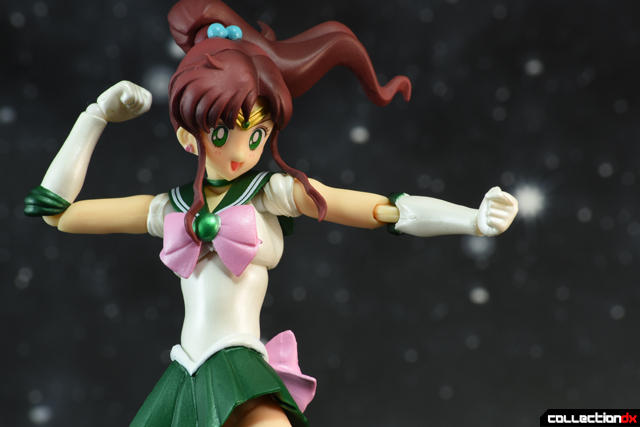 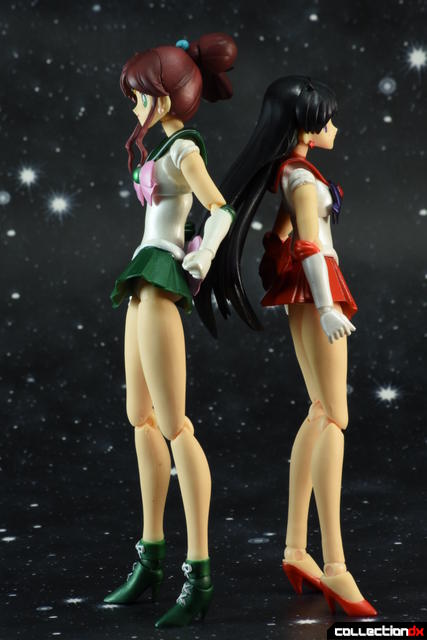 For size comparison, here we have the celestial buddies, Mars and Jupiter, next to each other.

Articulation for this figure is great, just like the other Sailor Moon S.H. Figuarts. Double jointed knees and elbows, along with ball joints, ball swivels and hinges in pretty much anywhere else you could want them, make this a very poseable figure. 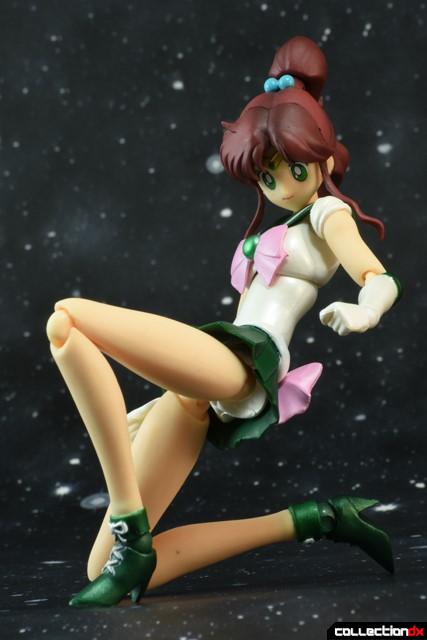 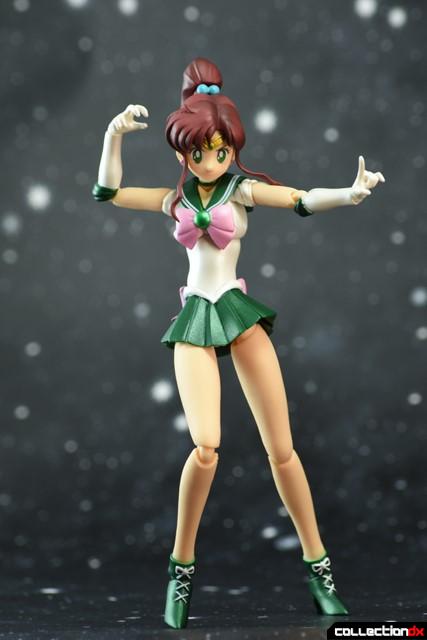 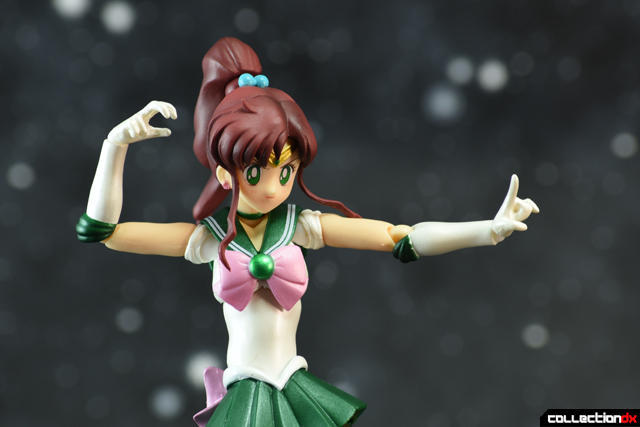 Like with the other Sailor Senshi, the only thing I would have added was a second ball joint at the base of the neck.

Even the ponytail is on a ball swivel joint on it, for all your dramatic hair-posing needs. 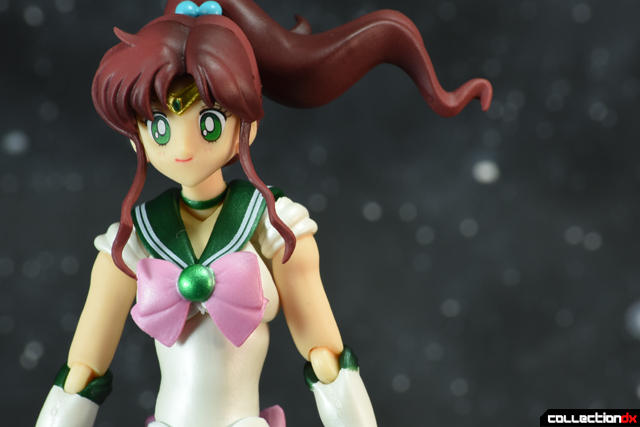 The skirt is a nice soft plastic material, which allows the legs to move without much restriction. 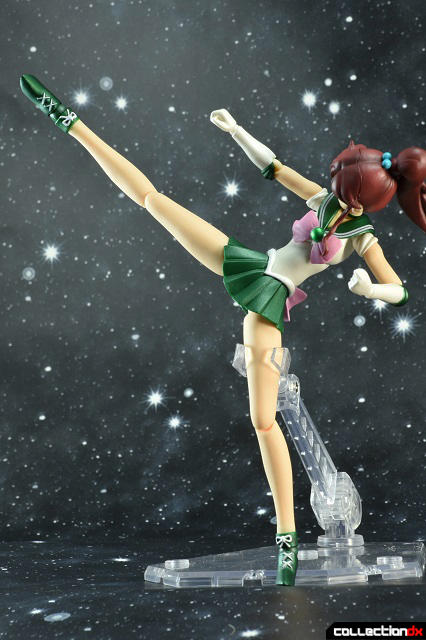 Since Sailor Jupiter is a long-legged sexy soldier on heeled shoes, it can present obstacles when trying to pose her in extreme ways.

Luckily, Bandai has given this figure its very own branded stand. 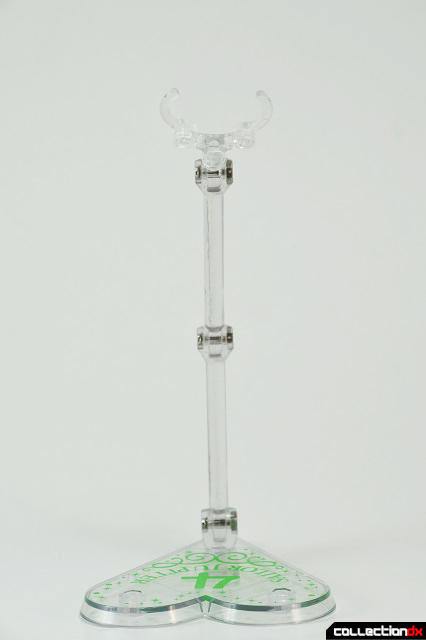 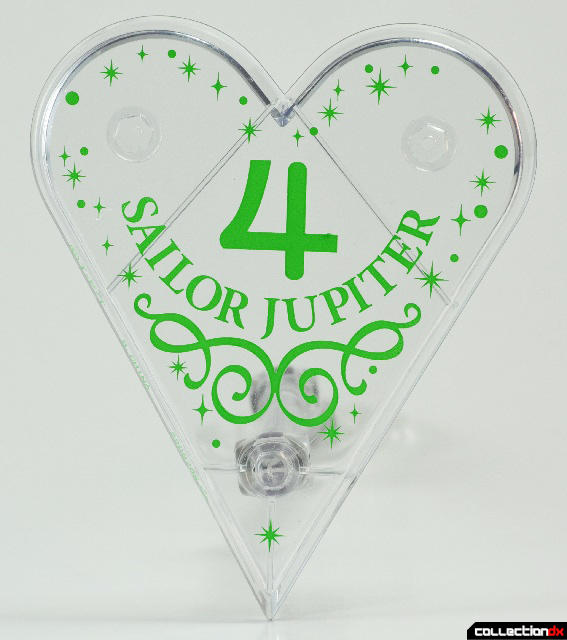 So you can go nuts with the posing possibilities. 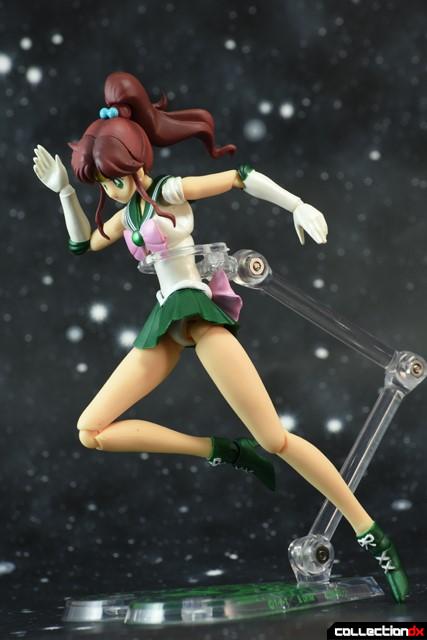 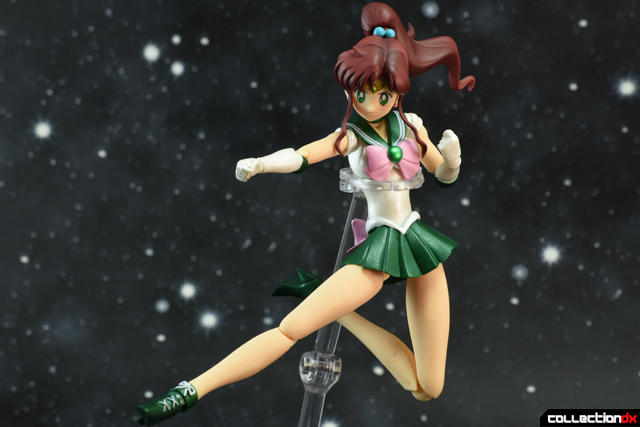 Sailor Jupiter comes with 4 faceplates and 12 hands.  The extras are held in this nice little plastic tray that you can take out of the much larger tray that houses the toy. 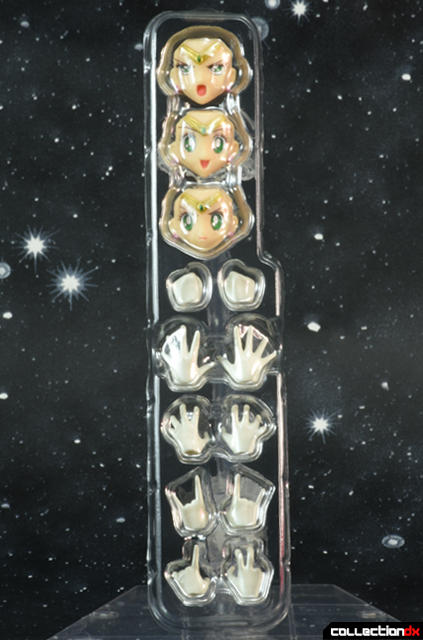 You also get a second front hair piece, which has an antenna attached to it. 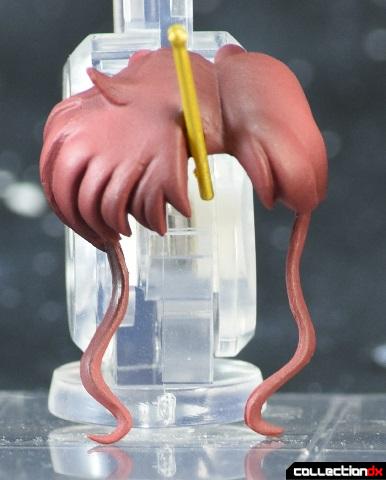 This antenna acts as a lightning rod for Sailor Jupiter's lightning-based attacks. 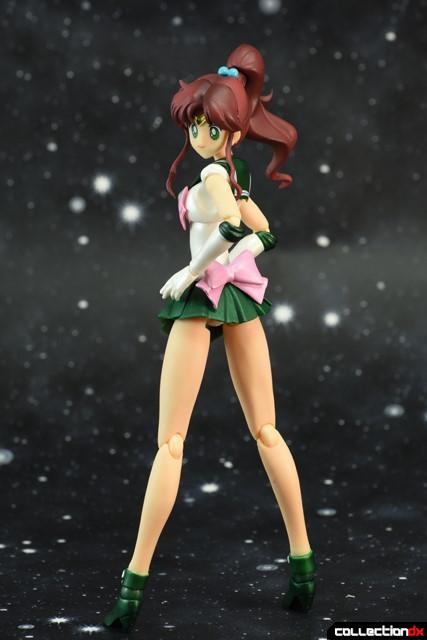 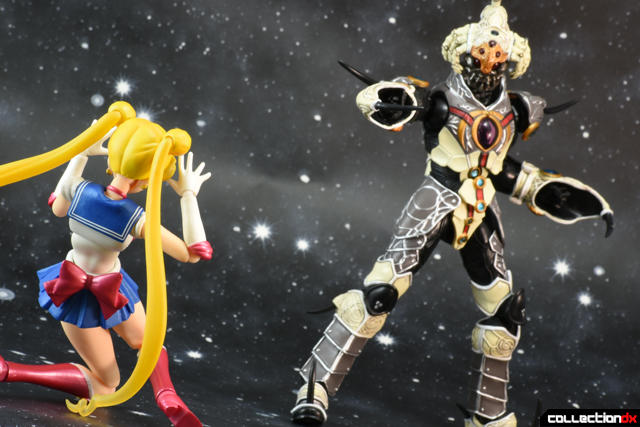 The monster sent by the Dark Kingdom is too much for Sailor Moon to handle and is making our heroine cry. But the fearless Sailor Jupiter isn’t going to back down from a fight with some scorpion monster thing. 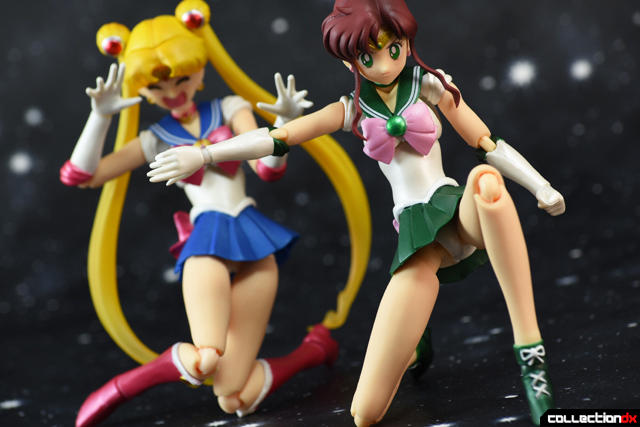 This could turn out to be a very long and elaborate battle, but instead Jupiter is going to take out the villain in usual Sailor Moon fashion. Roll that stock footage attack! 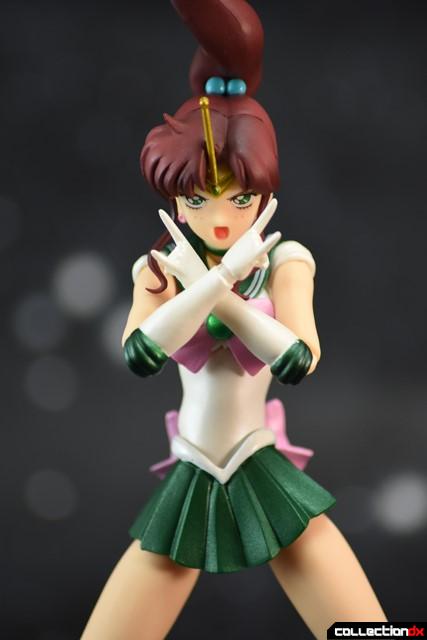 My guardian Jupiter! Brew a storm! Call the clouds! Bring down the lightning! 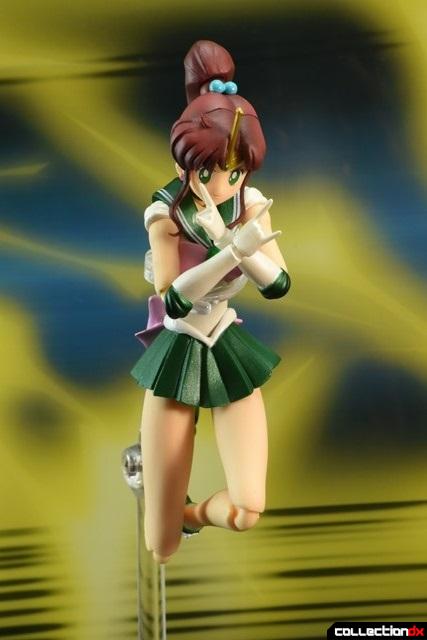 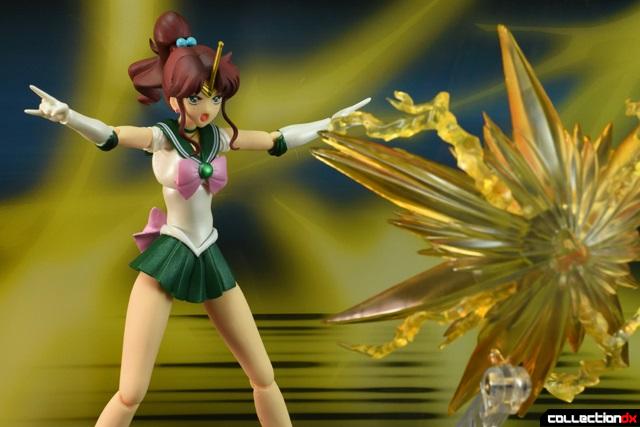 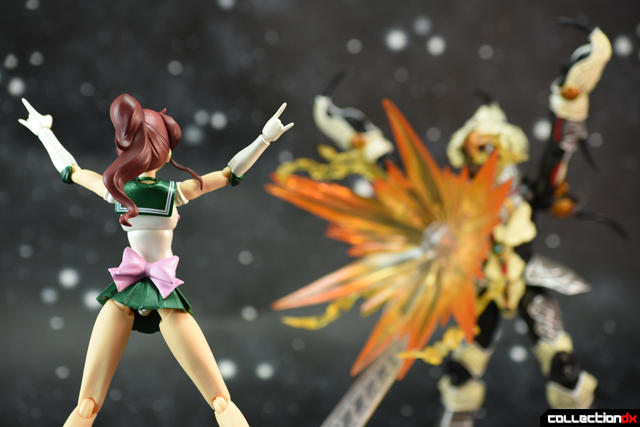 ....While the Sailor Senshi may have defeated the monster of the week, they have yet to face their most evil adversary... 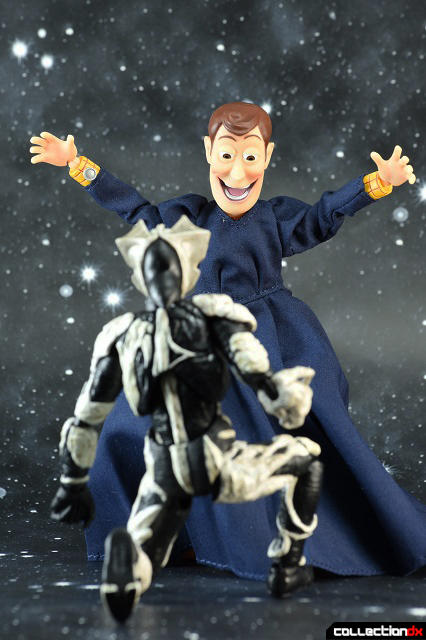 ...Queen Woodryl, substitute commander of the Dark Kingdom, plots his... err... I mean her next move agains Sailor Moon and her Senshi.