A repugnantly minded and tempered 17 year old girl, she hunts to find the wielder of the other half of her scissor blade as the wielder would irrefutably be the murderer of her late father. On a quest of vengeance, she joins the ranks of the Honnouji Academy to slay the big wig, of course not before getting some information.

Kill la Kill is an over the top and ridiculous anime from the collective minds of Studio Trigger, a disbanded and reconstituted Gainax. Director Hiroyuki Imaishi (of Gurren Lagann and other prolific anime fame) brings his unique and defined style to yet another show, and PHAT and Max Factory bring the main character of Kill la Kill to statue form (and what a satisfying and gorgeous statue it is).

The packaging for Ryuko is art in itself. A beautiful matte black offset by a glossy red makes for a stunning box. 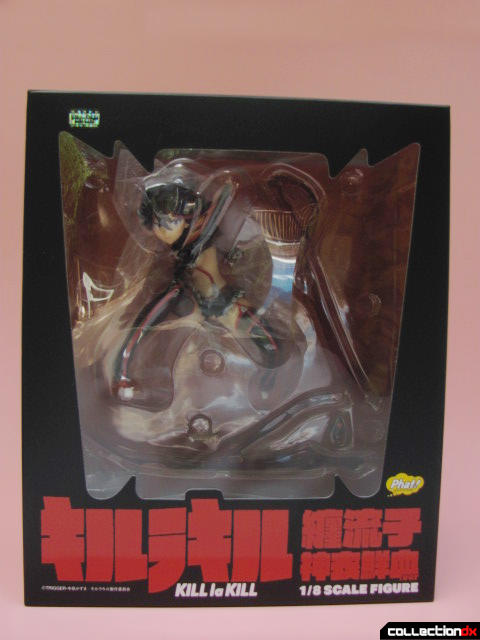 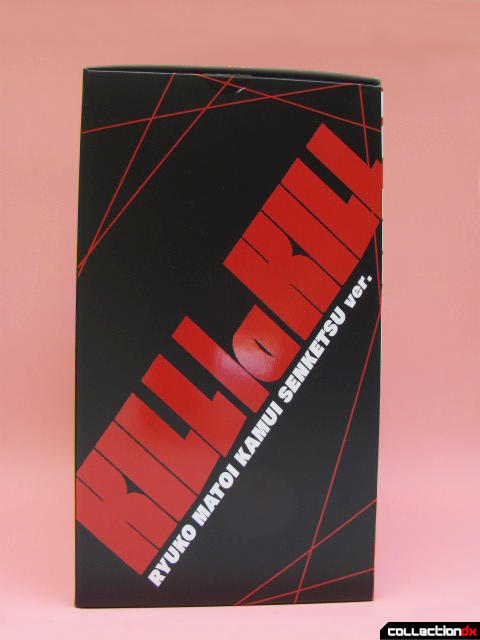 The best part is that when the box is opened it makes a facsimile of little ol’ Senketsu! 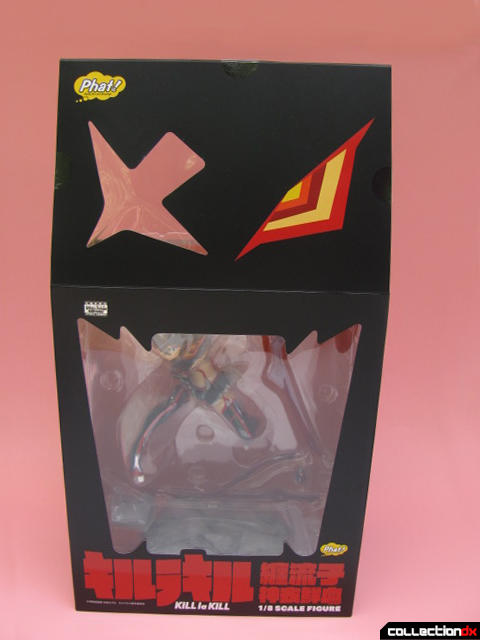 Such a great piece in and of itself.

The Toy
Now for the main event.

And I think I’ll let the pictures do most of the talking here ‘cause I can’t say with enough words how beautiful this statue is. 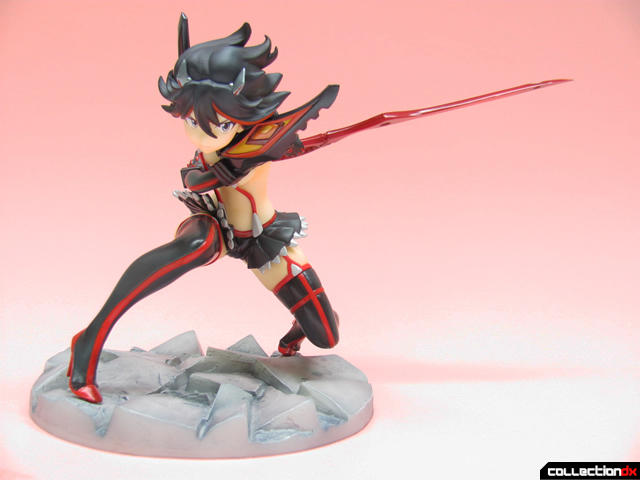 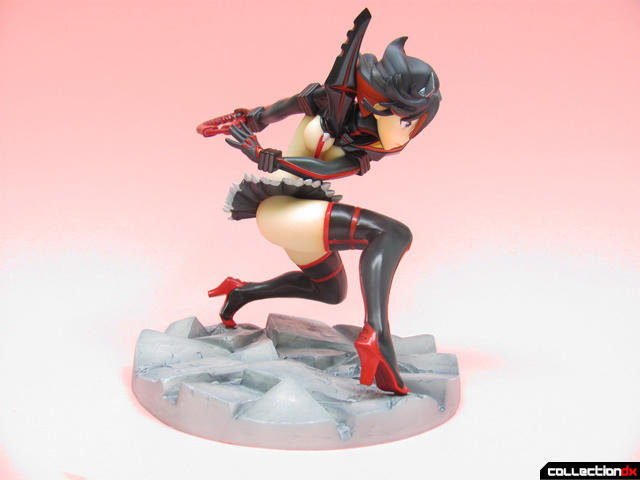 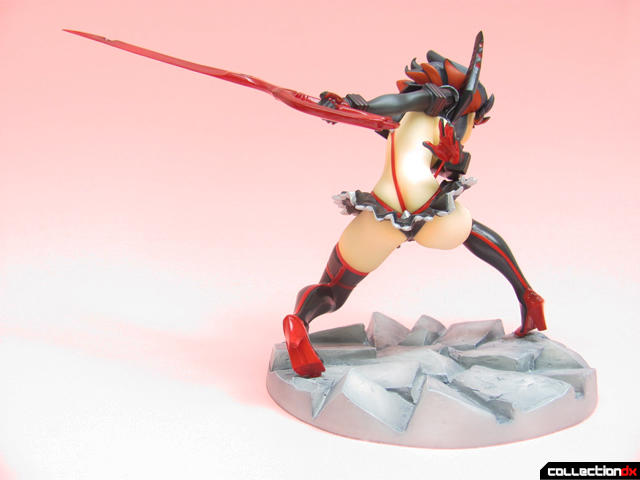 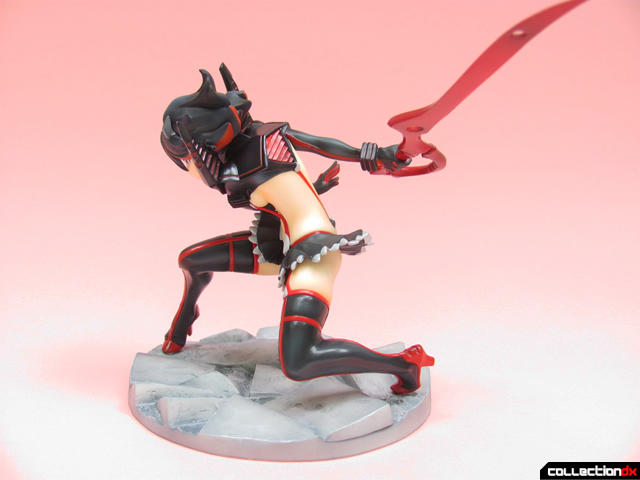 Lavish begins to describe this statue. It emanates an awesome power about it, one that works with the seething revenge centric to Ryuko’s character. The action pose that she’s in is—simply put—really cool. It looks as if she’s getting ready to decapitate someone (or something) or she already has. It does make her appear rather small on your shelf but it in turn makes her very dynamic and look good at a multitude of angles: 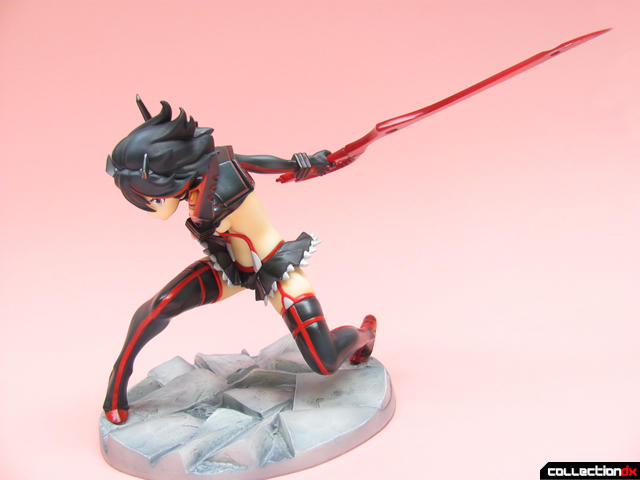 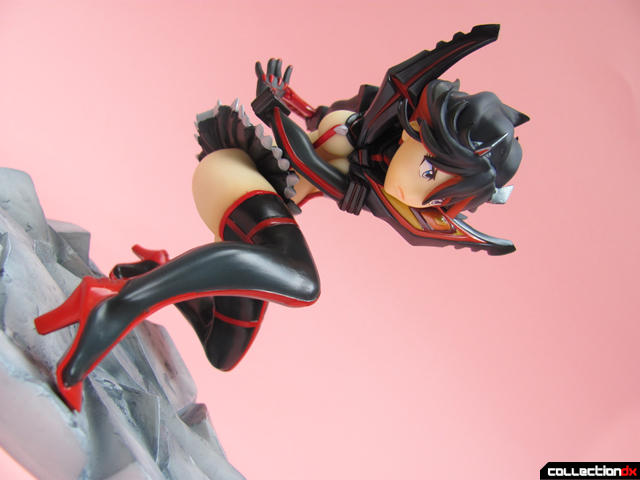 Speaking of size, Ryuko stands at about 5 ¼ inches tall; however, being in 1/8 scale she’s still big and has great displacement. 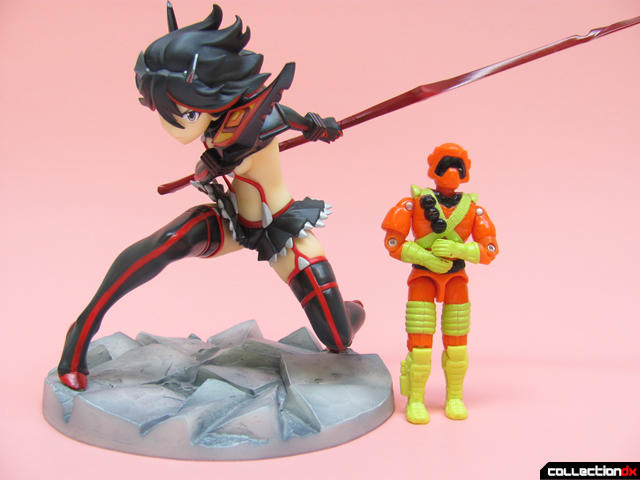 Translating 2D characters into the realm of 3D takes some working and some things don’t come out looking exactly right; it’s inherent in the process. That being said, Ryuko looks pretty much spot on to her animation counterpart. Very few artistic liberties have been taken and everything has been faithfully represented. 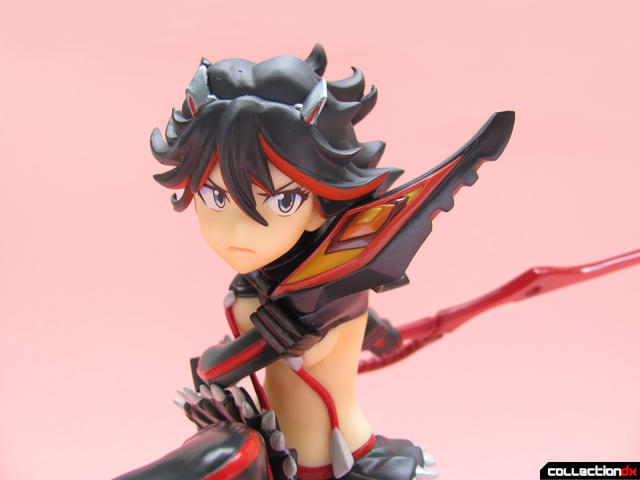 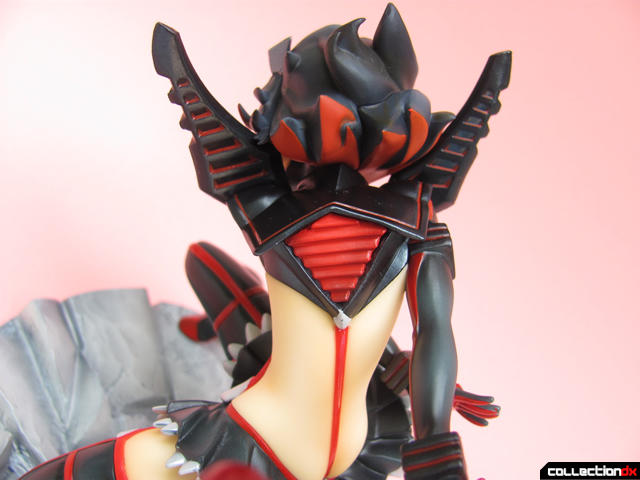 There’s not an awful lot of sculpted detail to take into consideration (seeing as how Senketsu is skin tight), but what is there is great. The red suit accents are raised; there are subtle folds and bunches in her boots; her skirt is layered and flowing; and she is rife with divots, grooves, and other such 3D detail. 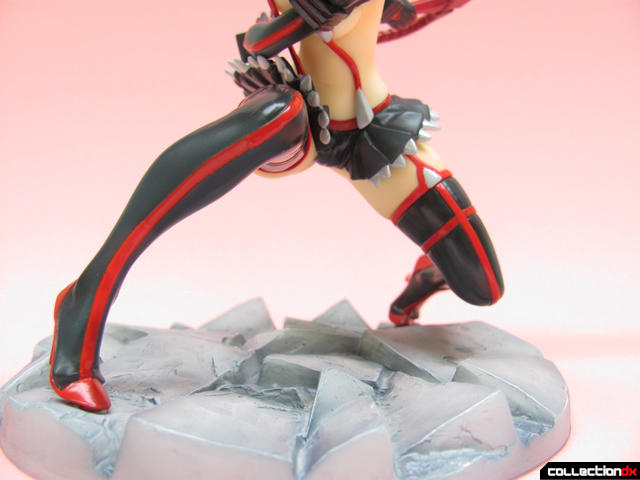 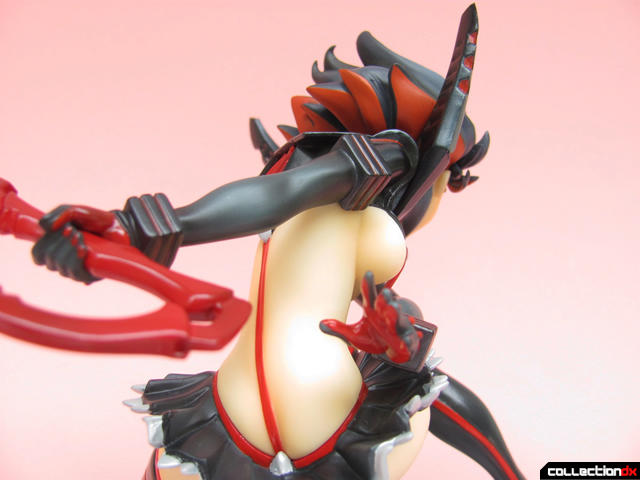 The anatomical sculpt of this statue is as correct and incorrect as the show, heh. There is careful consideration on her extremities of muscle groups, fat, and bone structure. Her gluteus maximus has a distinct end point and her hamstrings/thigh a defined starting point. And on her arms, her brachioradialis is notably exaggerated from her torqued radius and ulna. 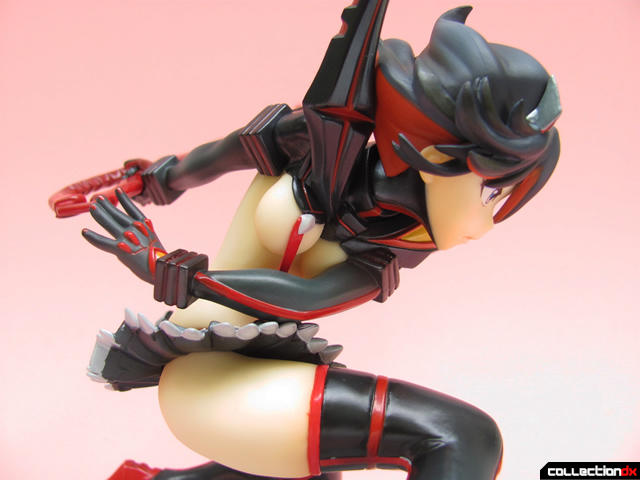 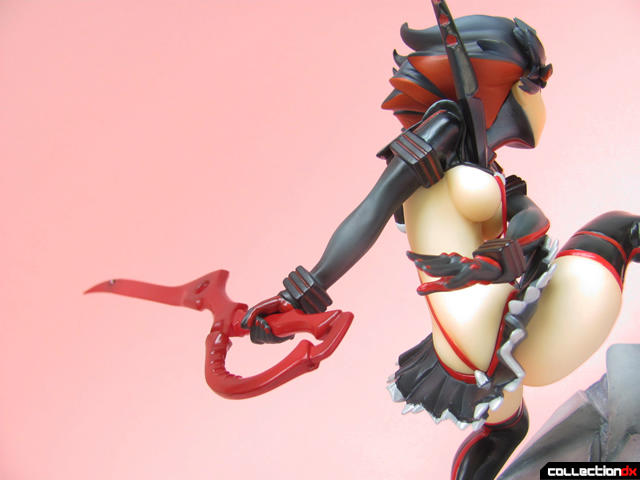 The anatomical considerations abruptly end, however, where her trunk is considered. It’s more or less just a chest and waist shaped chunk; no muscle or fat considerations to speak of. Not even a belly button. This is most likely due to the fact that all the rest of the attention and PVC went into her breasts. . . 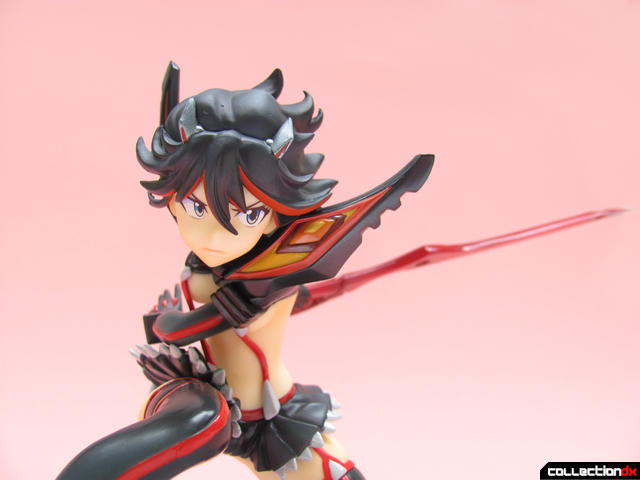 The paint on Ryuko is great.

The black and red are a deep kinda 40/60 matte/gloss; it’s shiny but not reflective. These play well together against the dull tones of her body and hair and are well punctuated by the sparse gray additions.

This being said, some of the paint is a tad bit sloppy. There are a few minute yet notable cases of overspray and pooling. These are on and only on the hand-painted parts of the statue. It’s a shame to see this; I usually expect (and have gotten) perfect paint on my statues. 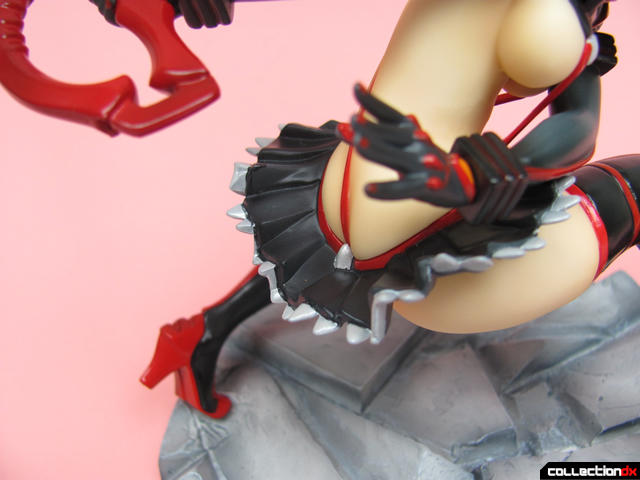 Ryuko comes with a few accessories: 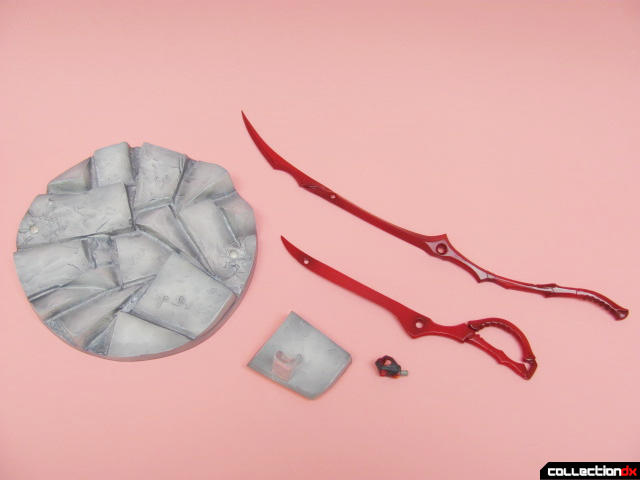 These accessories all have the same lavish attention and detail as the main figure. My only complaint is that the two Scissor Blades feel very light, almost cheap with an unintentional bumpy finish. This is, however, to alleviate the PVC sagging over time.

Speaking of sagging, the stand comes with a swappable piece for Ryuko to lean her knee on to, once again, alleviate stress over time. 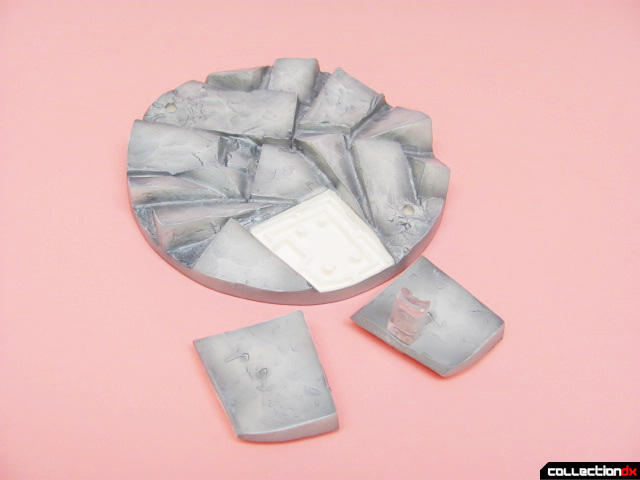 Her Scissor Blades connect at the hilt and can be reconnected through her hand. It makes for a very snug fit after some slight work. The Decapitation Mode Hand replaces her splayed hand via a mushroom peg and hold the Decapitation Mode Blade the same way. 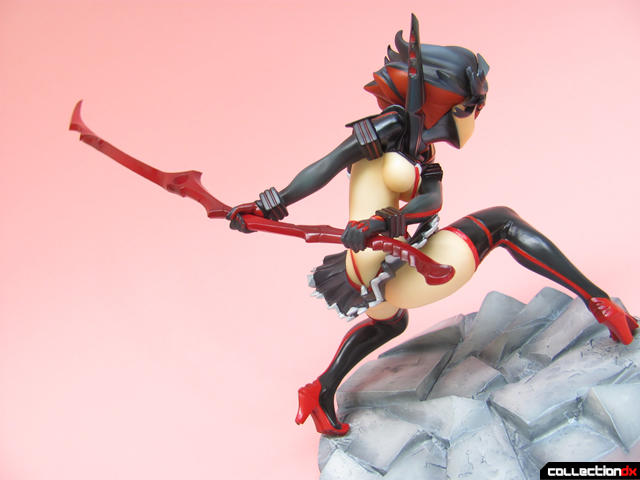 This blade is also BIG. 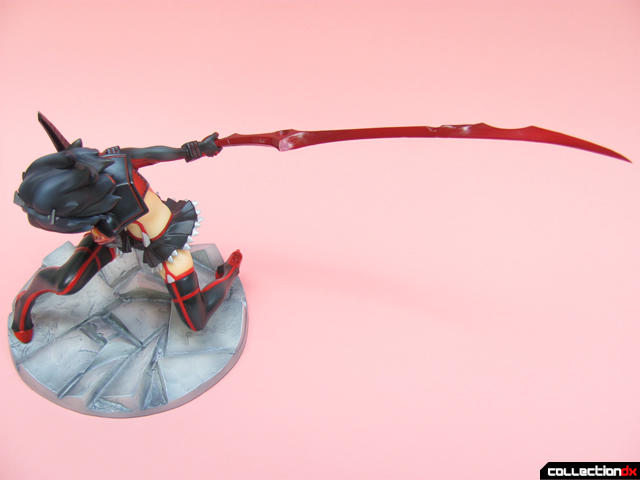 Since I purchased my PHAT Ryuko from the official Trigger online store, I was given a free store bonus, and what a bonus it is! It’s a (copy of a) hand drawn thank you from Sushio, character designer of Kill la Kill and animation director of Gurren Lagann (as well as much more). This is a phenomenal extra and a wonderful memento (besides the statue itself) of the show, its crew, and their dedication to it. 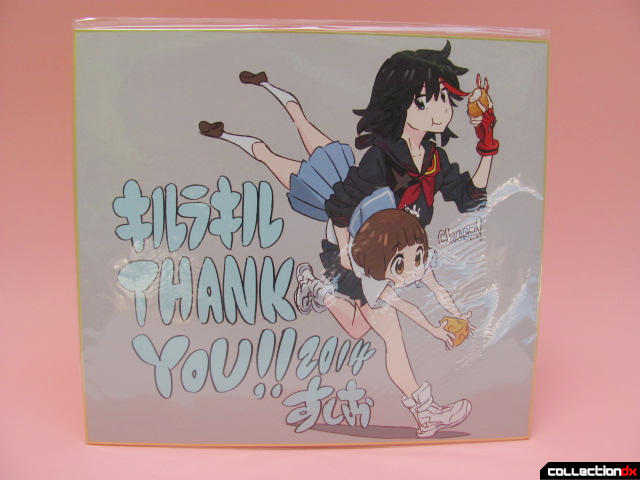 PHAT’s Ryuko statue is a complete and total winner.

Though it may suffer from a few minute problems in the paint department and a few weak anatomical sculpt points, as a whole this statue looks great with exuberant attention to detail and character. Ryuko exudes so much power and presence on a shelf and is a wonderful piece for any fan of Kill la Kill. 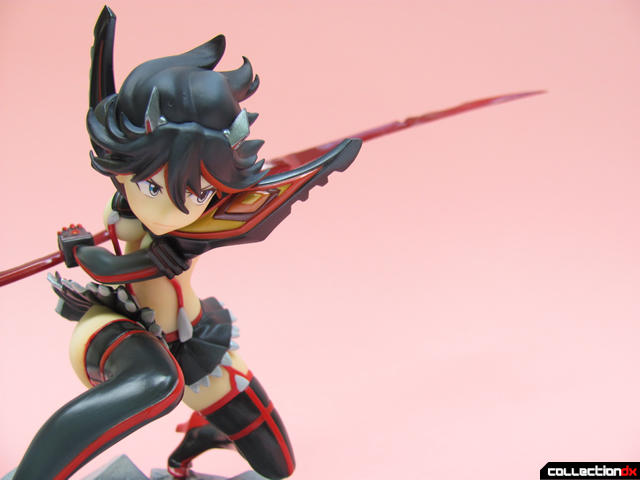