Rokushingattai Godmars hails from the 1981-82 anime of the same name and is the 13th entry in the Dynamite Action series of magnemo toys by Evolution Toy.

The toy comes packaged in a somewhat large box, measuring in at almost 16" wide x 9.5"tall and 3" deep. The completed robot will ultimately only take up about 1/3 of that size but of course all the various parts are laid out in a plastic try. It amuses me that "Godmars" is written 5 times on the front of the box, albeit in 2 different languages. 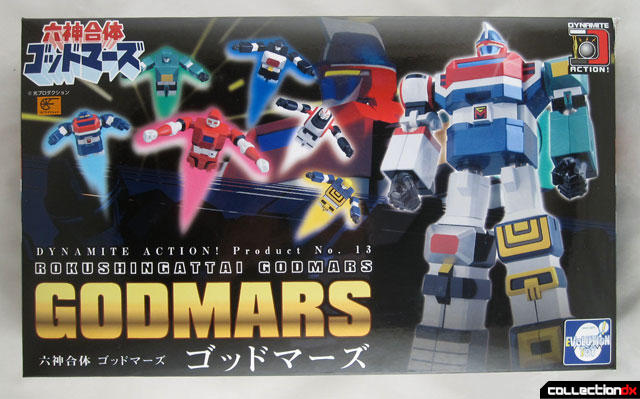 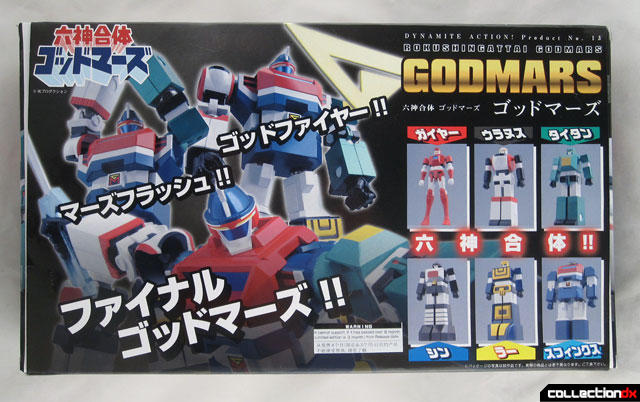 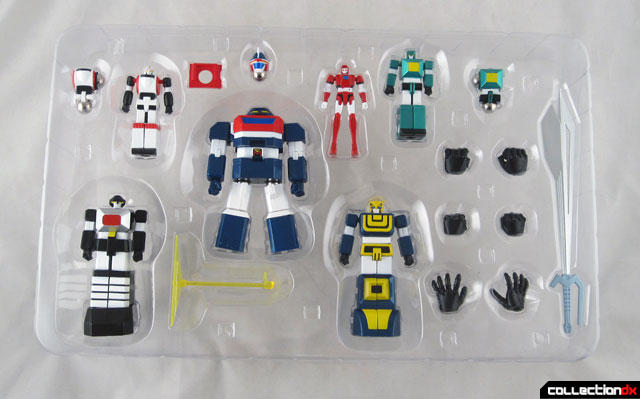 Included in the tray are the six individual robots, or "gods", that combine to form Godmars, as well as a mercifully small sampling of accessories. Don't worry, you don't get 8,000 fists like Albegas! 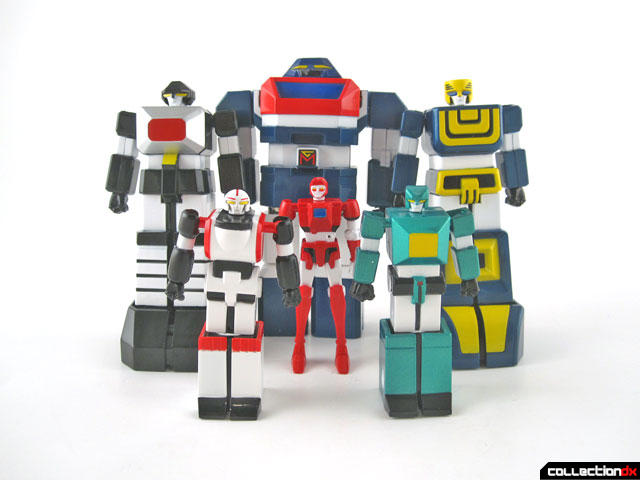 The first god, Sphinx, comprises the main body in the full combined form and measures slightly more than 4" tall on it's own. Of all the lesser robots, this one probably has the most articulation. The arms move up and down on solid detents while all swinging outwards. The hips and knees are also jointed and the fists are on removable ball joints (more on that later). The only thing that disappoints is that there is no elbow articulation. A fake joint has been molded in, almost as a tease though. 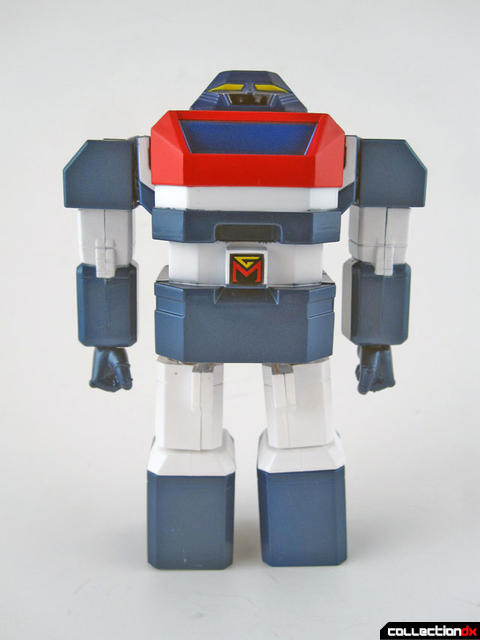 The next god, Shin, forms the right foot. It stands about 3.75" tall and is articulated at the shoulders and neck. The arms are on a ball joint and the head fits over a small tab and turns.The feet are on a magnetic ball joint so they can be moved but this is intended mostly for use in the combined form. But if for some reason you need Shin (or Ra) to list to one side, you can do it. 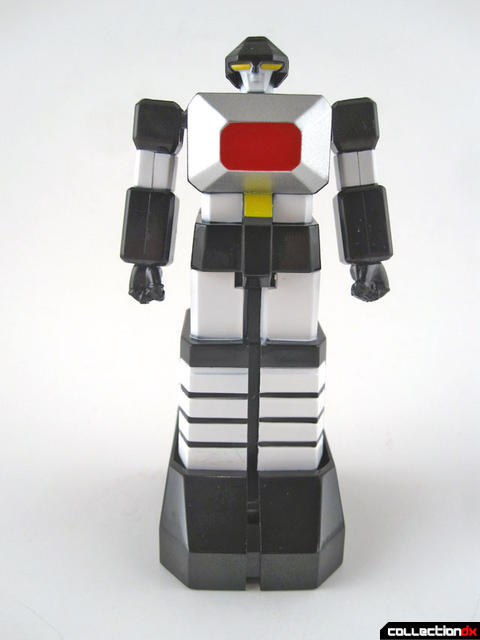 Ra, which forms the left foot, looks different from Shin but has the same basic design and function. 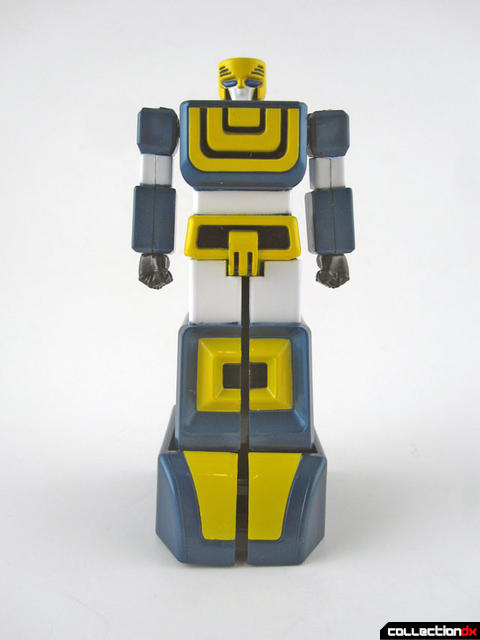 Uranus forms the right arm and stands about 2.5" tall. It's arms are on ball joints but that's it for articulation. 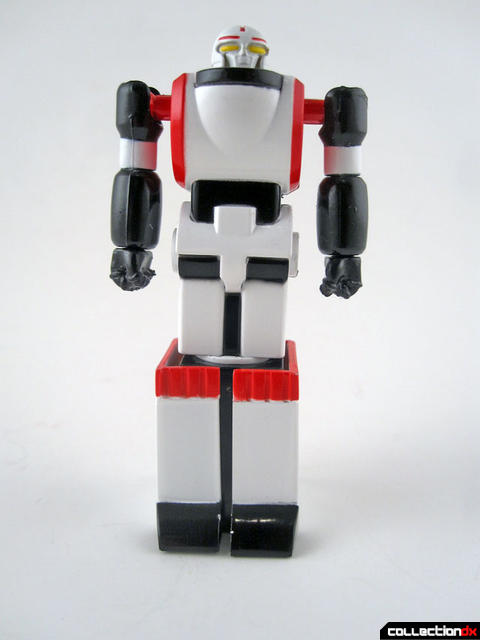 Titan is the left arm and is the same in function as Uranus. 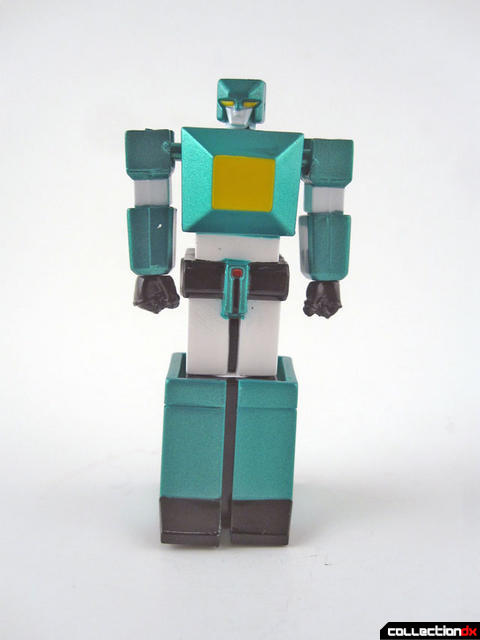 Lastly we come to Gaia, which you might expect to be the smallest of the bunch but is actually a bit taller than both Uranus and Titan. It's arms are on ball joints and the legs bend at the knees. The arms tend to pop off pretty easily and at least on my specimen, the small metal rod that attaches the legs fell out of my left leg so sometimes that falls off, too. Gaia docks into the chest of the completed Godmars robot. 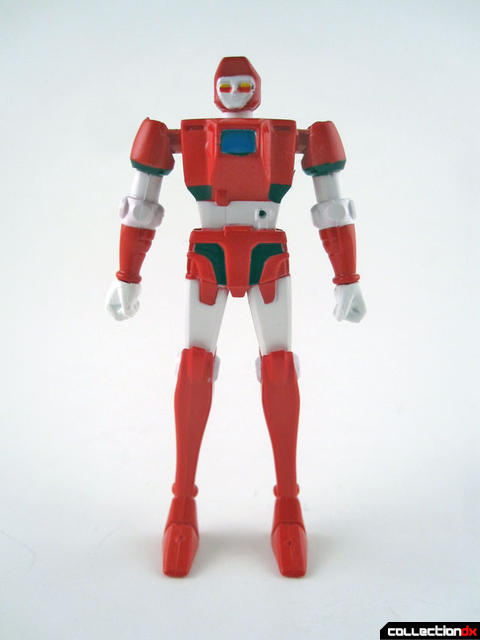 Unfortunately, this toy doesn't replicate that and instead uses a lot of parts swapping. Rather than show you step by step in pictures, I decided it was easier to just shoot some video so check this out if the combining process interests you.

One thing I do want to touch on here because I think it's important is how the hands connect. As you can see below, the hands and the arm both have a hole in them. 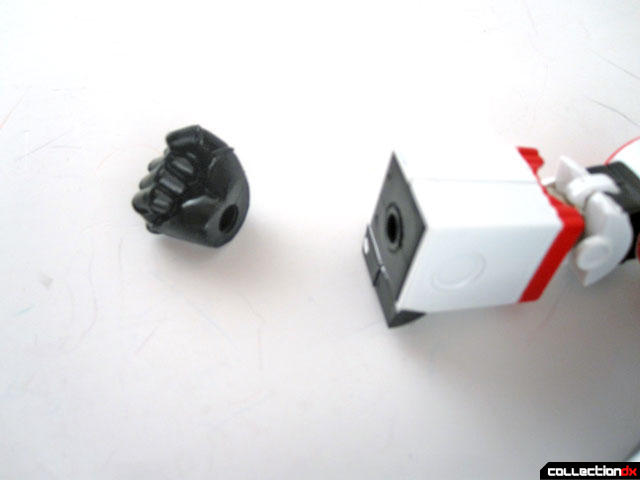 You need to steal a tiny plastic double ball joint from the Sphinx robot and attach it to Godmars before you can use any of the included fists. 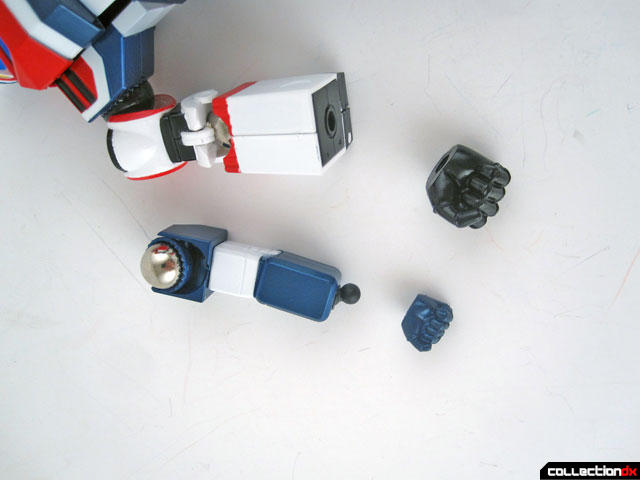 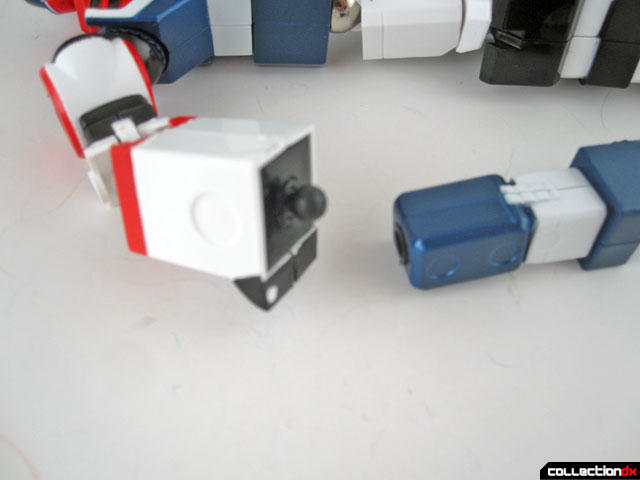 This process gets easier over time but you run the very real risk of dropping and losing the vital part if you aren't super careful. If you do lose that part, you're out of luck and will be stuck with a robot with no hand(s). It would have been nice if they'd included extra pieces, just in case. Regardless, it just seems like a terrible idea to begin with, especially for a toy that employs magnets as it's gimmick. Why not just embed a magnet in the end of the arm and attach it that way? It would work in the same way as the head does and still have a wide range of articulation.

Regardless of that misstep, the final form of Godmars is very pretty to look at. It looks just like it should without having the magnets be too unsightly. Godmars stands slightly more than 7" tall. 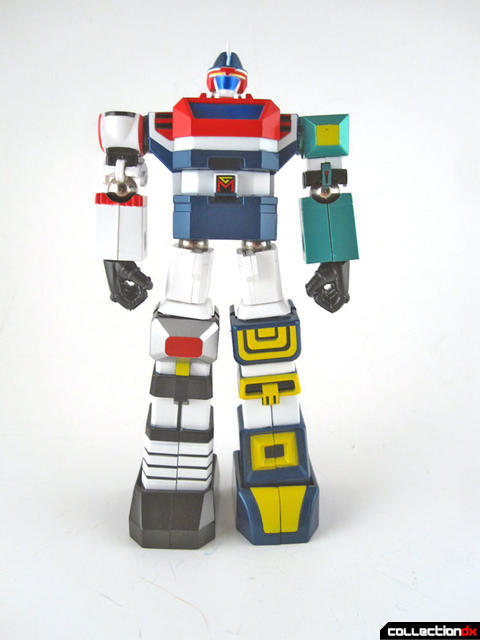 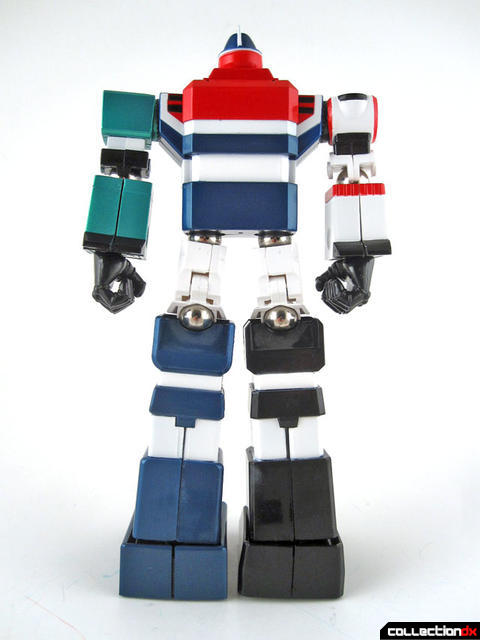 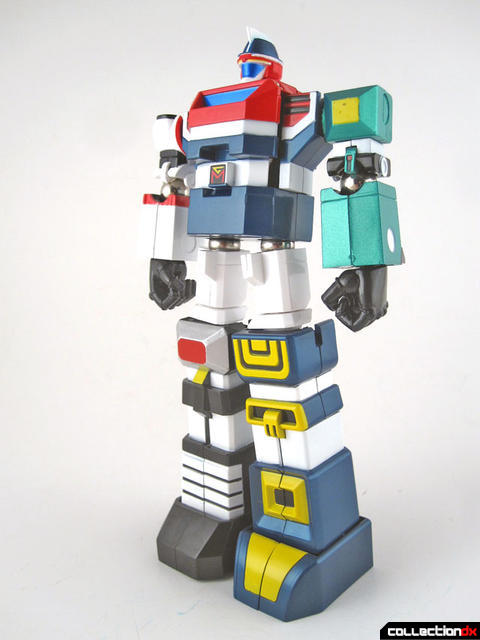 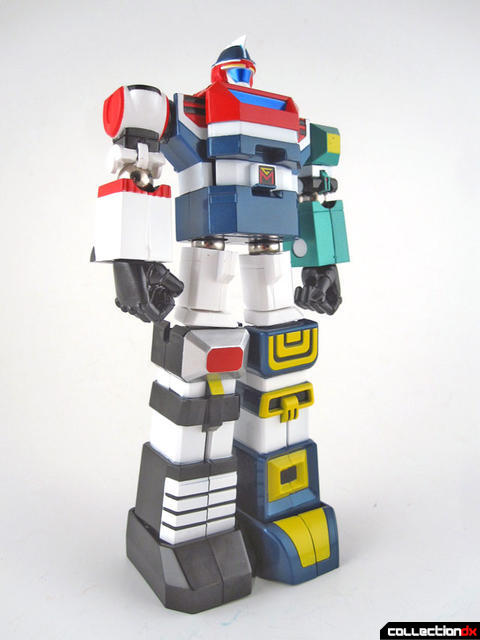 Once everything is put together, you're left with a very satisfactory representation of the classic robot, with ample articulation for a variety of poses. 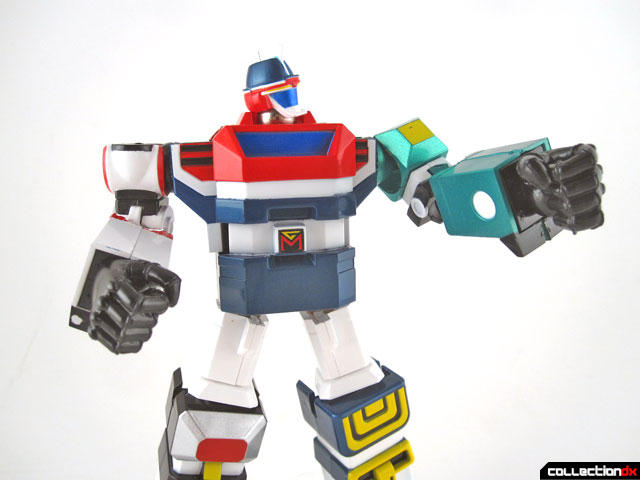 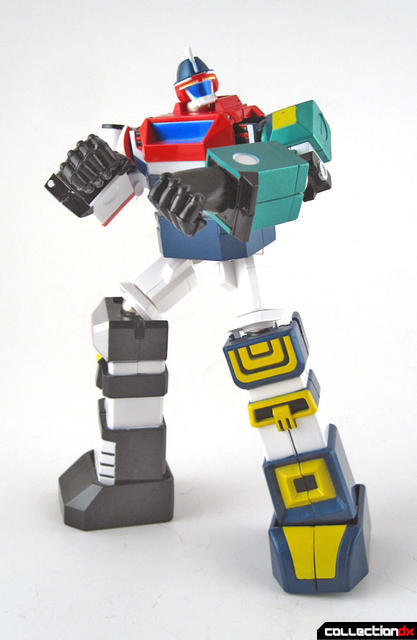 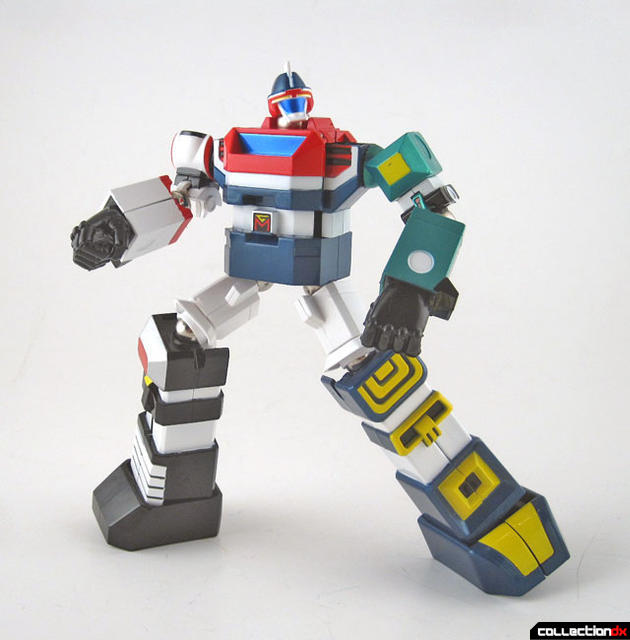 The only issue I have with the final form is the gap in the chest that leaves Gaia exposed. It's a very small gripe and I honestly do not recall if previous toys of this character have the same issue. 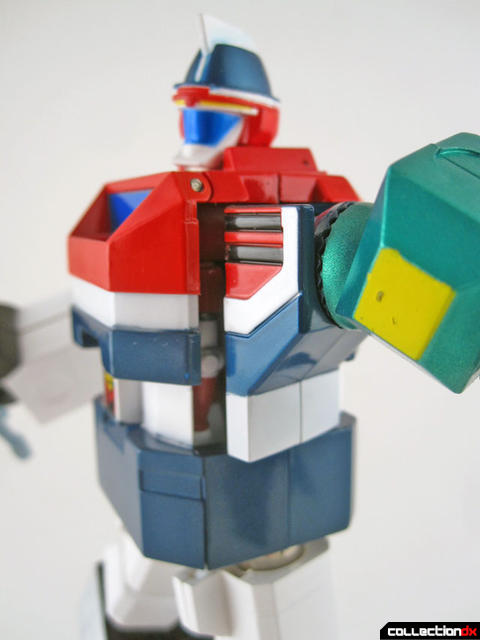 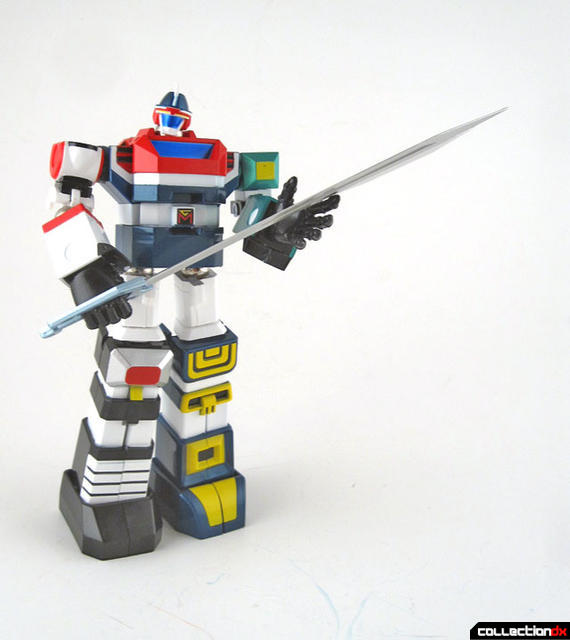 A final feature is a the "Godfire" effect. This is a blast that emits from the waist of Godmars. 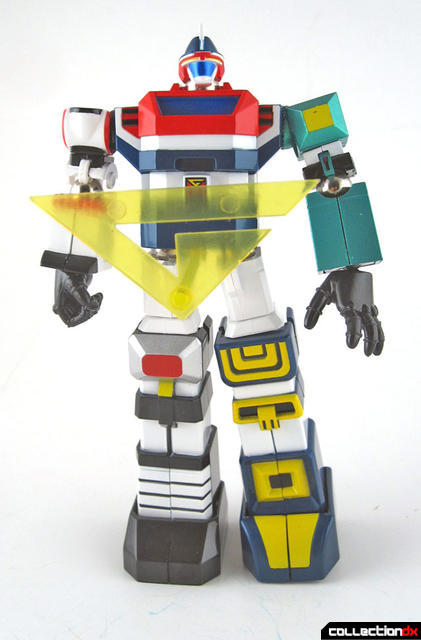 Viewed from the front, this is perfectly fine. However, to connect it to the toy, you need to lift up the chest piece and connect it right near the crotch. 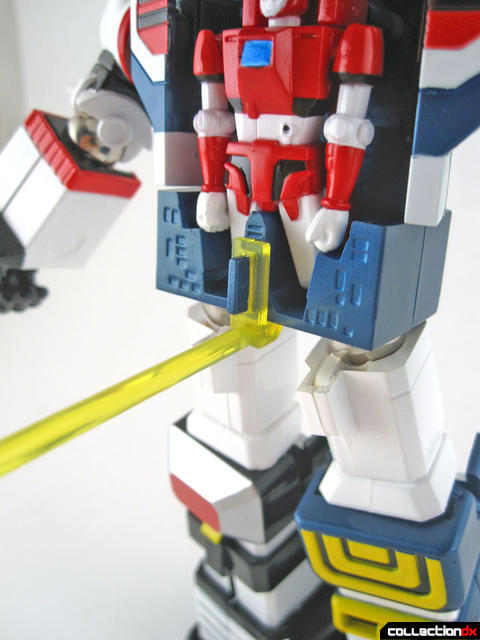 So yes, there is a transparent yellow pole extending from the crotch. This just begs for some immature humor, doesn't it? 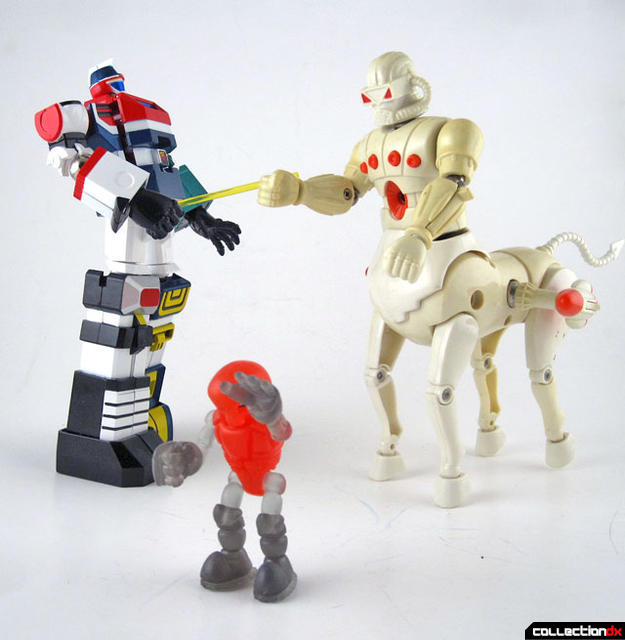 Uh-oh, Papa Godmars is not amused. 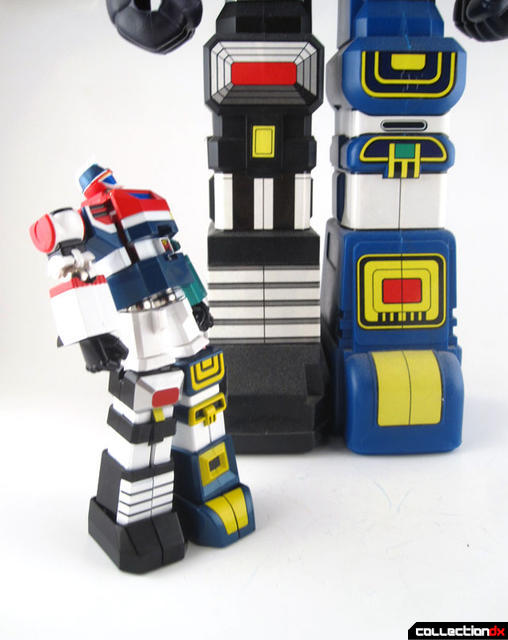 So, what are my final thoughts? Well, after some initial disappointment, the toy has grown on me over time. Ultimately, it's an excellent representation of the character that, combined with other entries in the line, has some real play value. But with no die-cast content, it's also light and floppy. The individual robots feel very cheap, making Godmars literally more than the sum of it's parts.

Wow, that looks impressive, but I don't like the idea of having to cannibalize parts from one piece to the other. Seriously, you'd think that they'd give you a few spare double ended ball-joint stems. Luckily there's enough after-market model supply makers that sell them.

This is one ET product that leaves me baffled. A nesting, transforming, combining, six into one robot? This is not something that their tech or designs do well. Why try and do this and compete directly with Bandai's offering, at (and this is the important part) Bandai's price point? ET is at their best when they go off the beaten path, and stay away from the more complex transformers.