This is the review of the most powerful and amazing racing car in the world, the Mach 5. The Mach 5 is the racing car of the young Speed Racer of the titular TransLux cartoon Speed Racer. Built by his father Pops Racer, the Mach 5 has many secret gadgets to help Speed win many races. But Pops doesn’t let Speed always race in the Mach 5 for fear that Speed might CRASH UP. Pops Racer doesn’t want the same thing to happen to Speed that happened to his other son Rex Racer after test driving the Mach One and CRASHING UP. Rex Racer then ran away after getting real mad at Pops and now Pops is real sad. But Speed Racer still goes and races and wins races for Pops and that makes him very happy. 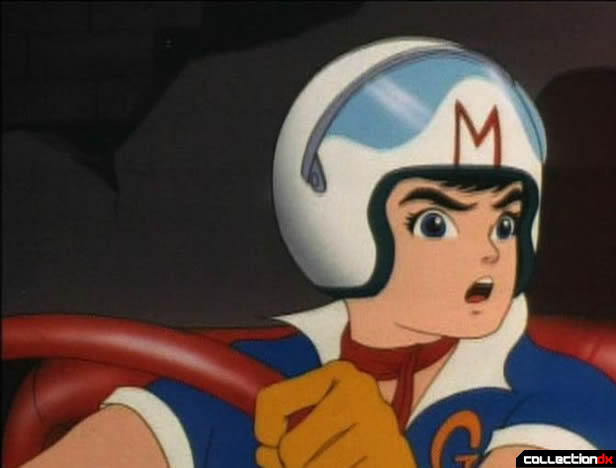 *Ahem* With this, Takara Tomy brings us the Mach 5 from the Wachowski Brothers’ film Speed Racer. Part of their Dream TOMICA line, the Mach 5 is 1:64 scale, metal, and well detailed and painted. While highly out of its price range, it’s still a good little car.

Packaging:
The Mach 5 comes in a simple yet charming cardboard box detailing everything you need to know about it. 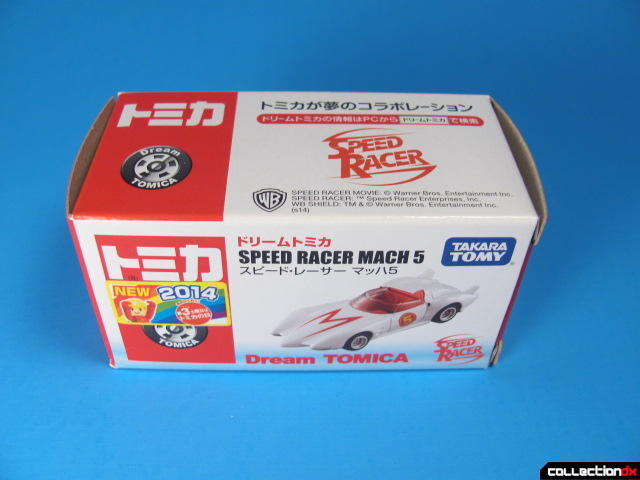 The Toy:
If you’ve bought Hot Wheels before, then you pretty much know exactly what to expect from the Dream Tomica Mach 5, as it really brings nothing new to the table; that said, I can safely say that the Mach 5’s paint apps are seriously super tight (and rather shiny) and smooth which—in some ways—is better than your average Hot Wheels. The body is also full diecast, which is hefty and nice. 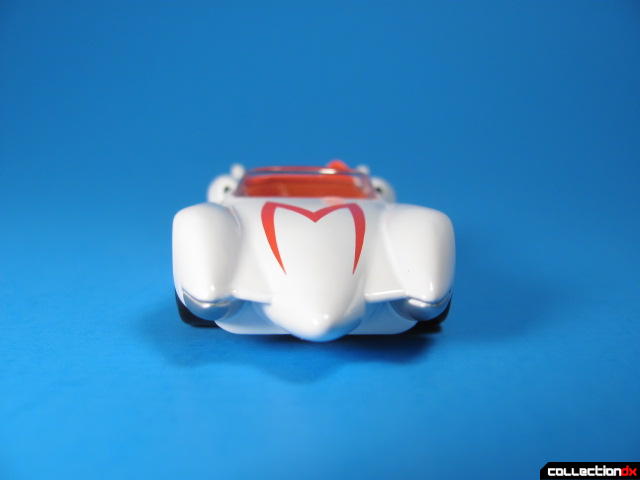 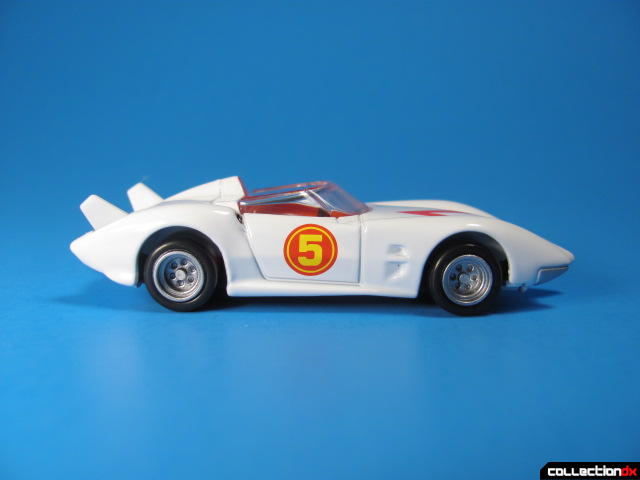 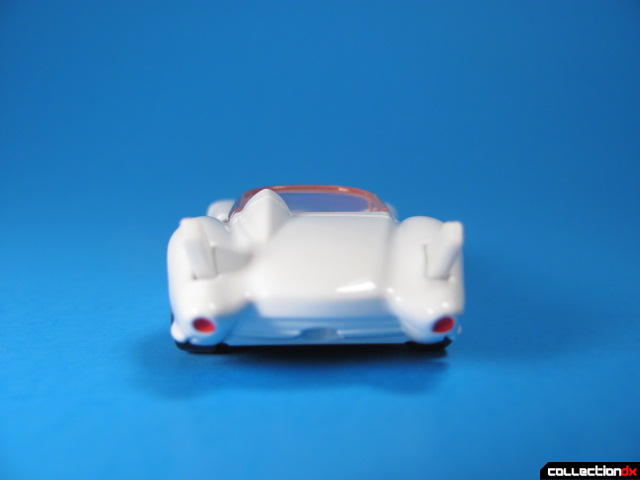 All the details—wheels, vents, grooves, and interior—are deep and accurate to the onscreen counterpart. The sideview mirrors are sorely missing, however, a big misstep, I feel. The back fins are made of matte plastic and are poorly cohesive to the car as a whole. 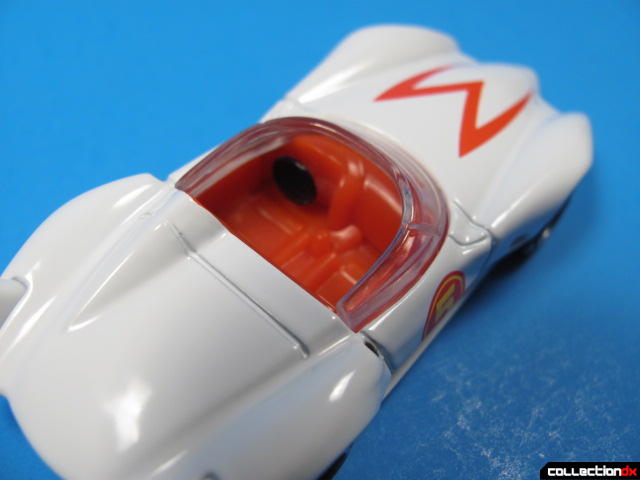 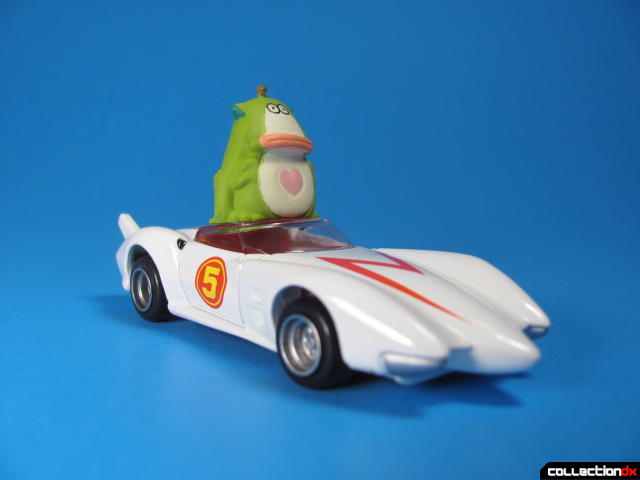 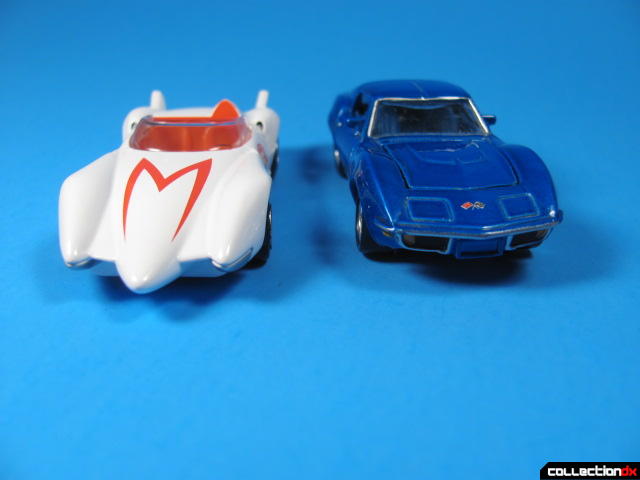 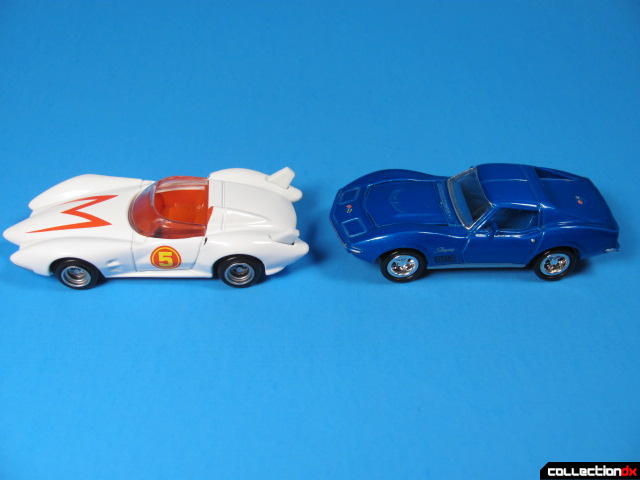 This is the one that really bugs me: no sculpted under carriage 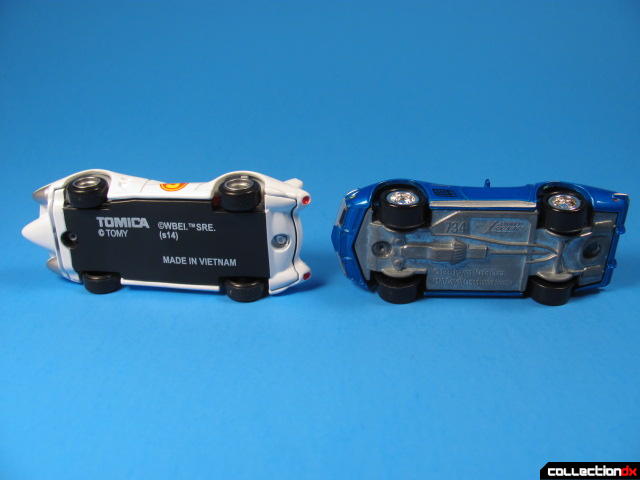 You don’t even have to pay $7 for that; Hot Wheels come with an accurate and moderately detailed and sculpted under carriage. And those pesky missing sideview mirrors?
The Corvette has them.
And an opening hood.
And other cars of a similar price point come with opening doors.
And rubber tires.
And metal wheels.

On that note, the Mach 5 does fit well with your other Hot Wheels: 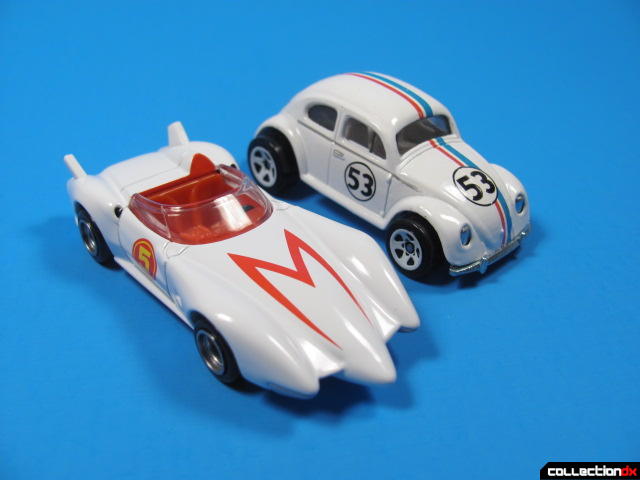 And it’s a good 3 inches long: 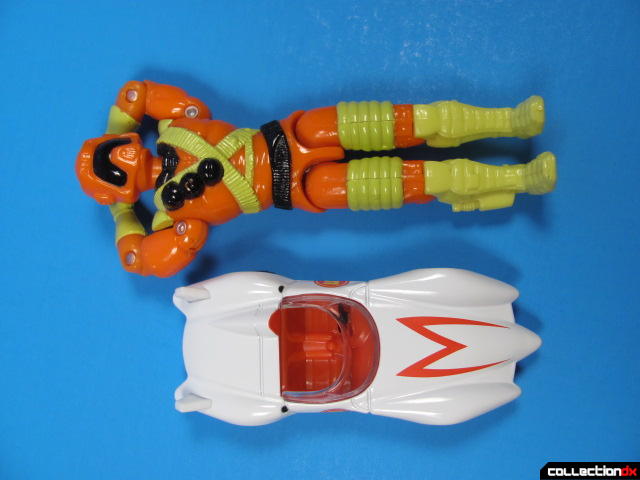 Now, I’m not saying that the Dream Tomica Mach 5 is a bad toy; I mean, just look at it! 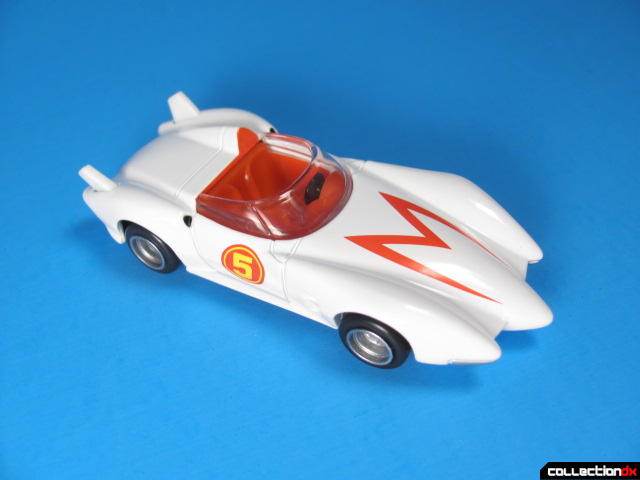 What I am saying is that it is sorely and malignantly overpriced for what little it gives you and what other similarly priced cars have. Only get this toy if you have an extreme love for Dream Tomica or Speed Racer and if you can find it on super clearance because sadly. . . it’s not worth the money. 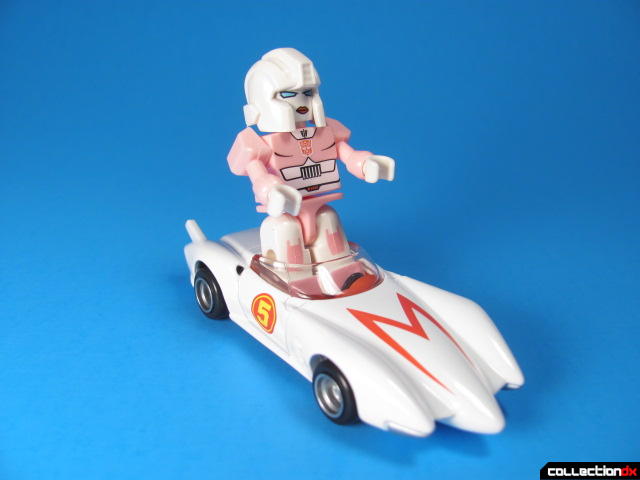 5 comments posted
They actually made an

They actually made an official Hotwheels Mach 5 back when the Speed Racer live action film came out. I own it and it's very similar to this. It's lacking the undercarriage detail, rear view mirrors, and opening doors, too. Only the bottom is made of metal an the rest is plastic. Hotwheels just aren't what they used to be, it seems... A neat feature though, is that there's pegs at the bottom to attach included weaponry.

I remember those, yeah.
Hot Wheels have become a mixed bag as of the past five years or so; some cars get more attention than others, it seems. Some will have copious amounts of paint and decals and clear parts while other won't even get painted taillights. I guess, in some ways, that's to keep Hot Wheels under a dollar; people tend to lose their minds when Hot Wheels are anything more than 97¢

I like mach 5 a lot, but I think the asurada series from cyber formula are the more powerful ones

This a million times. Especially since pretty much all of the cars from Cyber Formula are basically the super robot equivalent of cars.

It is made in Vietnam? Wow. I'm Vietnamese and I cannot find Tomy's factory anywhere.