Luigi Mario (of the Mario brothers) started off humbly enough, as a recolor of Mario made for the second player. He quickly evolved into his own distinct character from the titular plumber, and became a beloved hero in his own right. Bandai's team-up with Nintendo has warped the legendary little bro into the world of S.H. Figuarts. 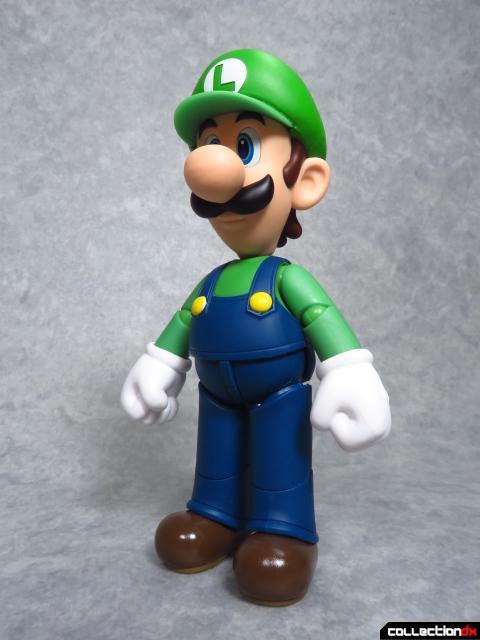 Luigi stands four and a half inches tall, and is a near-perfect representation of the slightly slimmer plumber. He's still sporting a bit of a paunch, which connects the character to his blue collar roots. 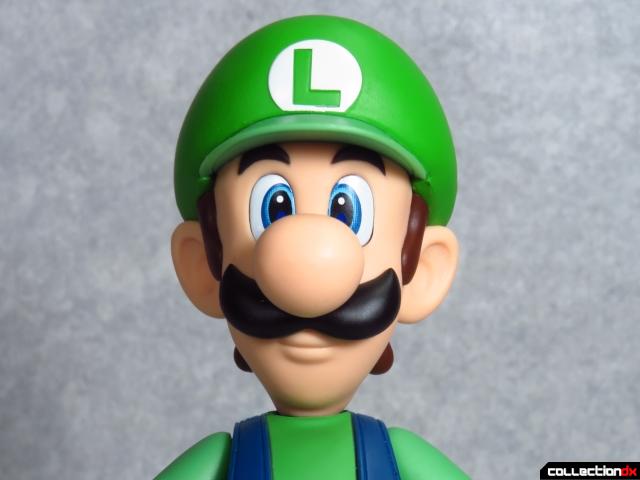 Unlike his brother's happy smile, the Figuarts Luigi has a more neutral expression. He does however, use the same black mustache dye as Mario... 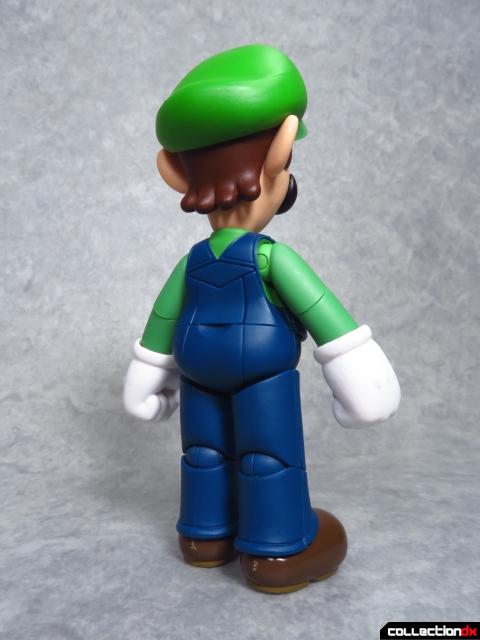 His plastic colors are both eye-catching and spot on to the character. Like Mario, Luigi is a relatively simple Figuarts who emphasizes straightforward play value over the line's typical excess. 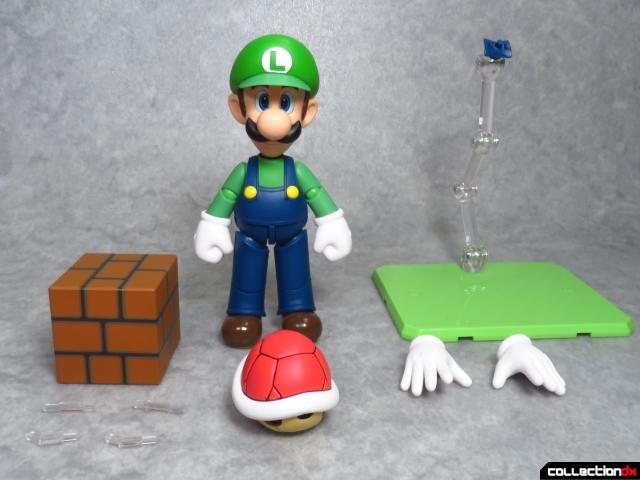 Luigi's spread of accessories is much more impressive than Mario's, which *clearly* shows who is the favored brother of the pair. He comes with a SMB-themed Tamashii Stage (with stand adapter), a red Koopa shell, clear pegs to hold the shell, extra hands, and a brick block. The shell and Tamashii Stage are noteworthy, because you had to buy two separate diorama sets to get these items for Mario himself. 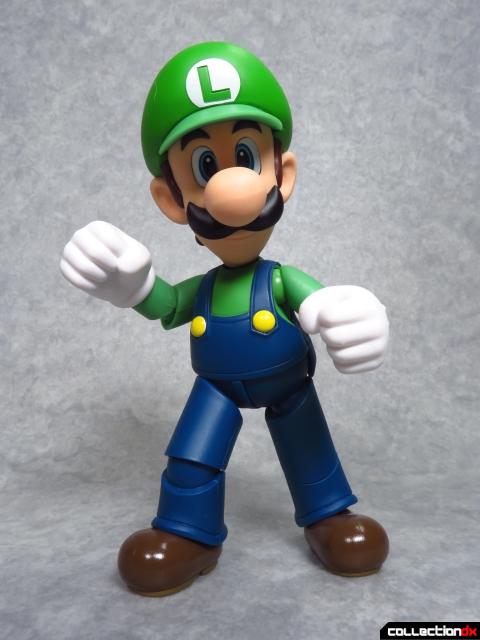 The 2P plumber is similar to his brother in terms of articulation, but his lankier legs appear to be a bit lacking in their range of outward motion. This is a minor quibble, as Luigi's proportions still result in a good looking A-stance. 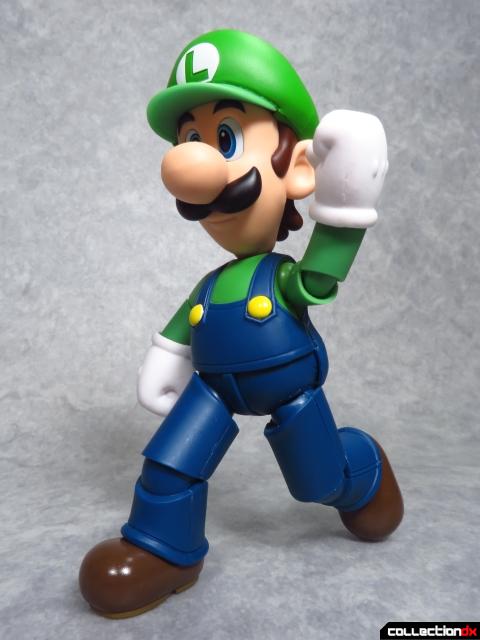 He is well balanced and can pull off some familiar moves, like a hasty run when you hold down the B button. 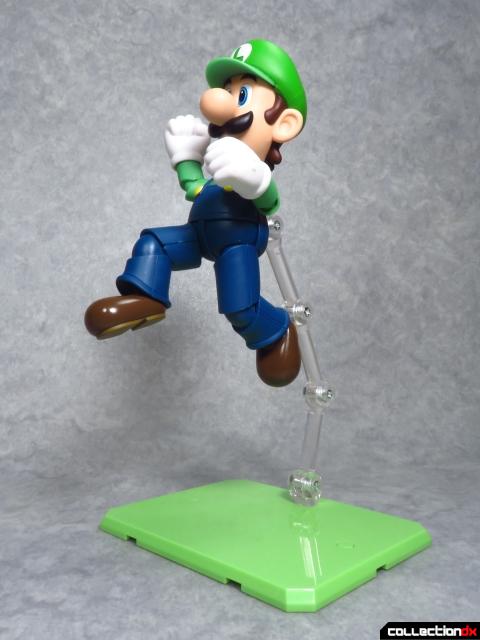 The Tamashii Stage provides instant access for high jumping action. Honestly, it makes me wonder why you had to buy this separately for Mario, when it is such an integral part of the plumber pair's appeal. 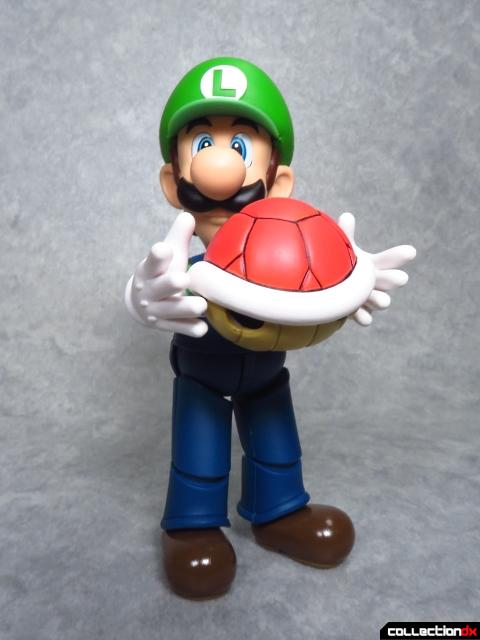 Luigi's extra hands not only provide an accessible emotion enhancer, but can also carry the included Koopa shell. To hold the shell with the head hole facing sideways, you have to use the clear straight pegs, which get inserted into the turtle shell's leg holes. 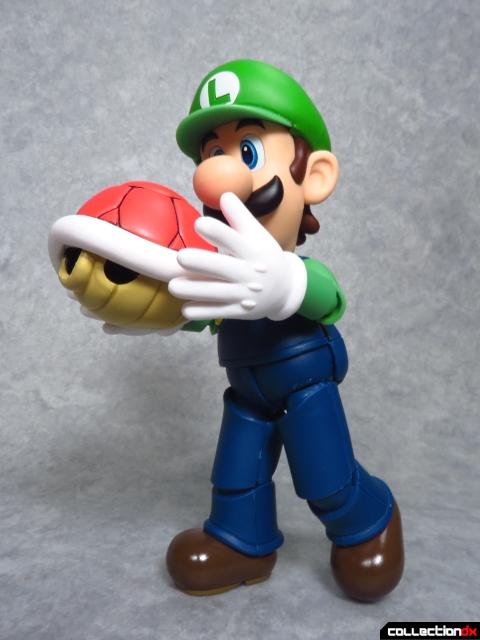 The angled pegs are for when Luigi wants to hold the shell with the head hole facing forward. Also, remember that with both sets of pegs, the longer end goes into the shell. 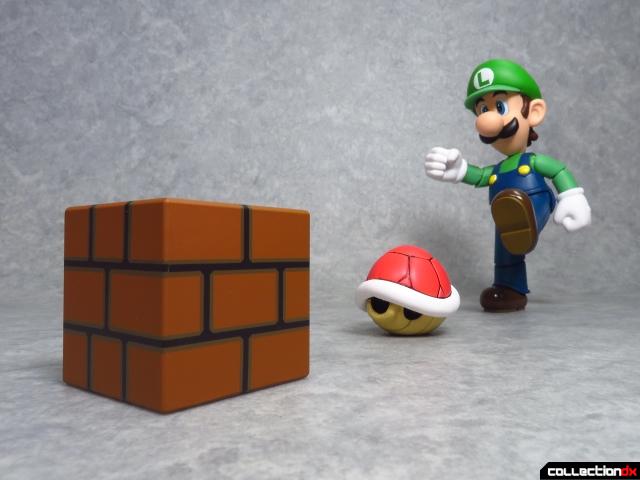 With a shell at the ready, Luigi can bust those hard to reach waist-high blocks when his spin jump isn't in the game. 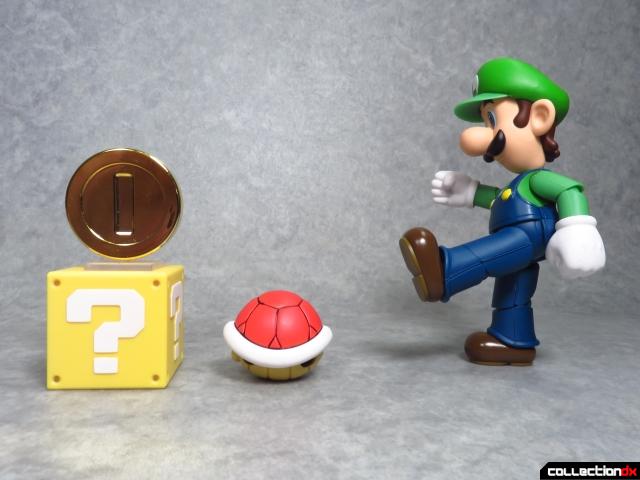 And if you have the Figuarts Mario (or one of the Diorama Sets), Luigi can kick a koopa at a variety of things. I'm happy that despite his different proportions, he can still balance on one leg for authentic punting poses. 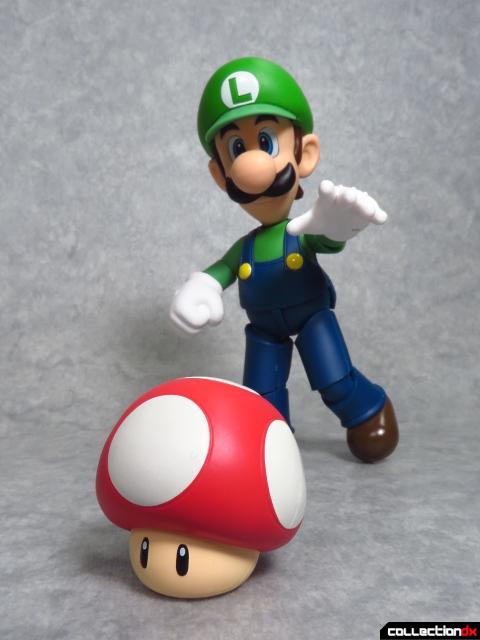 There's a lot you can do, even if you only have the main Mario Bros. figures. 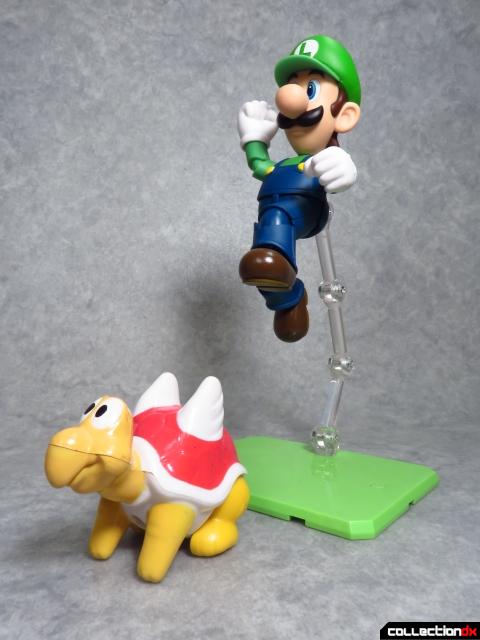 Also, if you still have your Super Mario Bros. 3 Happy Meal toys (like me), Luigi can jump on them for some family-friendly assault. 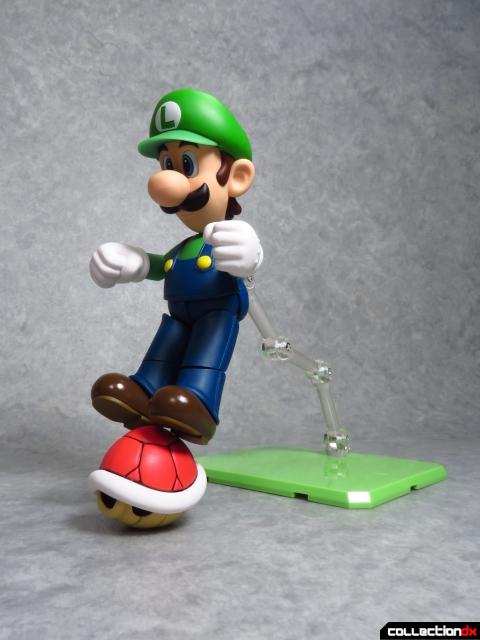 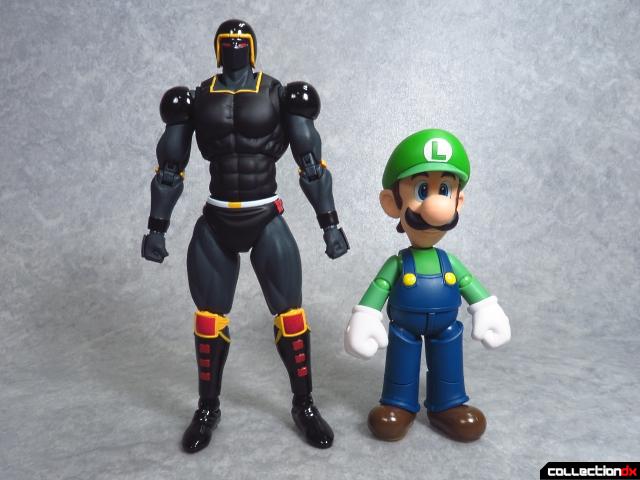 For another size comparison, here is Luigi next to Warsman, who is a more normally-proportioned six-inch figure. 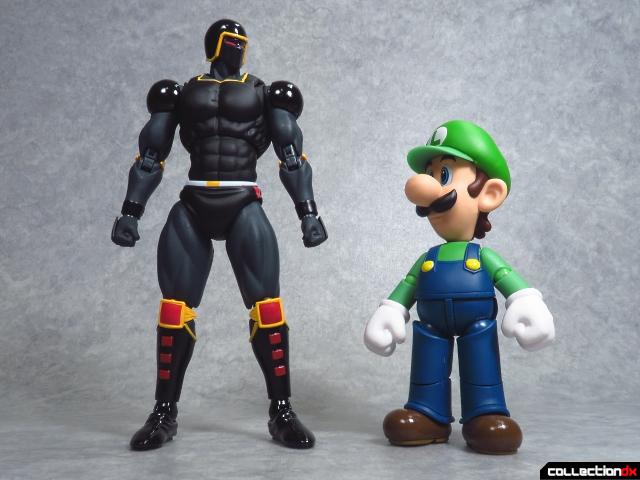 "Uh.. excuse me! Why does your head look like a Buzzy Beetle? Are you working for Bowser?" 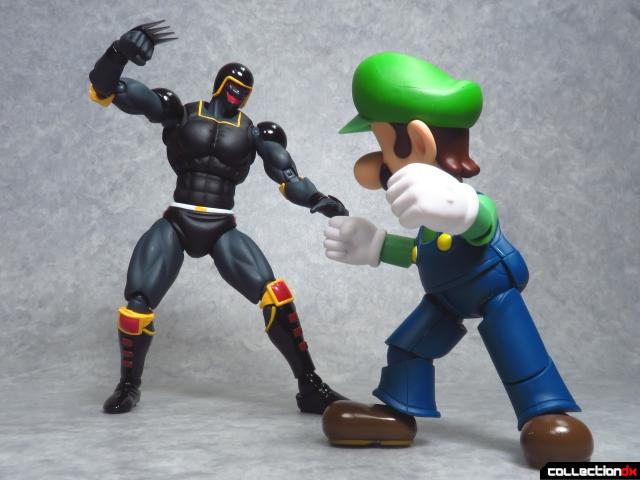 Bad move, Luigi, Warsman does not like being associated with turtles... 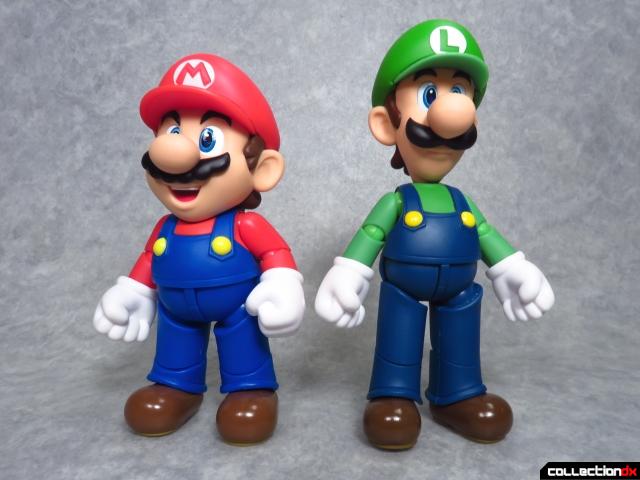 Both Luigi and Mario look perfect next to each other. Their relative heights are just right, and their aesthetics match just as well as they do in official artwork. 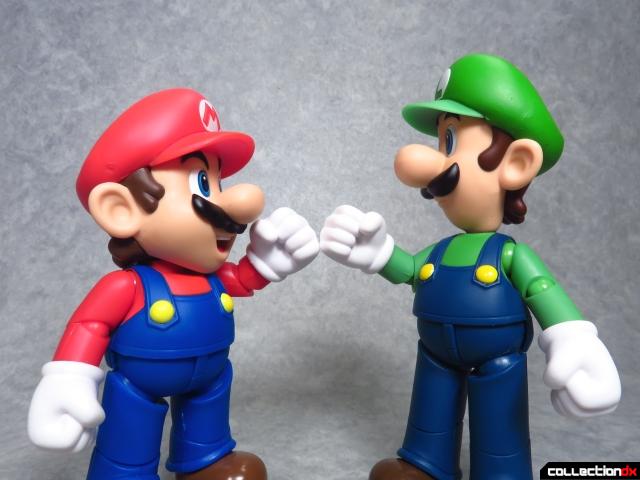 With these two, it's always bros before 'shrooms! 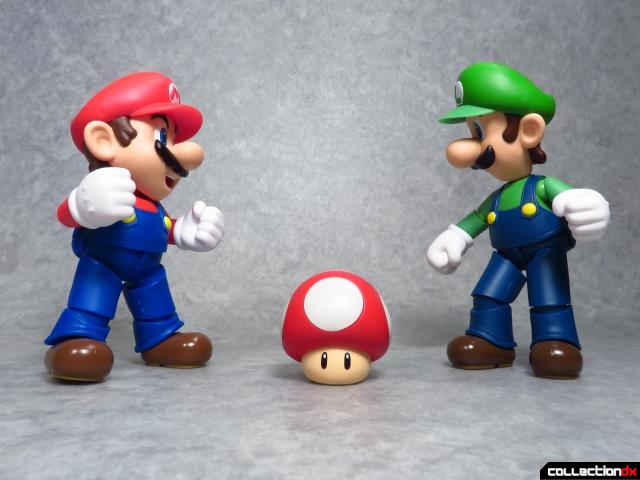 "Oh, Luigi! You gotta respect your big brother! I need it more than-a you!" 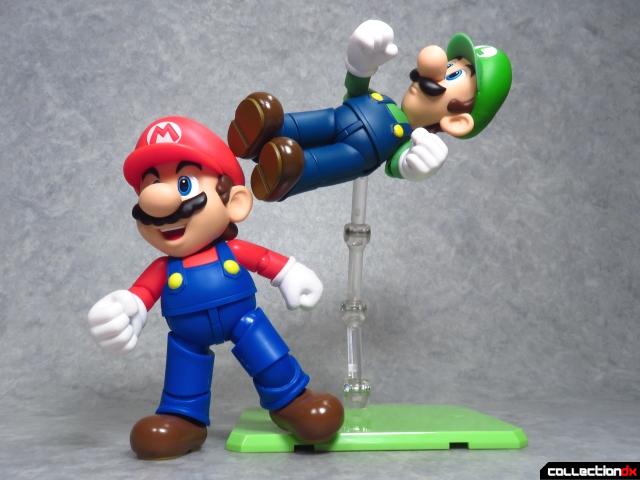 Luigi was always my favorite fighter back when I played the original Super Smash Brothers on the Nintendo 64. 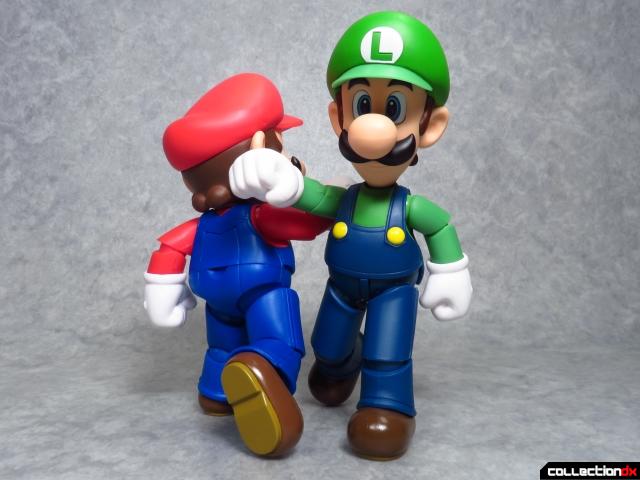 He even had the best victory screen out of the whole crew.

This should come as no surprise, but S.H. Figuarts Luigi is actually the better buy of the two brothers. He comes with more accessories, which allows you to do the Mario right out of the box. And to his fans, this innate superiority was obvious from the get go.