Kaga is another member of Kantai Collection's massive cast of Fleet Girls. She represents the Imperial Japanese Navy aircraft carrier of the same name and is usually paired off with Akagi, who I reviewed here. As you can probably tell, Kaga and Akagi are meant to complement each other, with both figmas using the same base design with a few tweaks for each character. Kaga was released as a Goodsmile exclusive and has been sold both on their website and at events like Wonder Festival. Oddly enough, she managed to get deployed even before the general retail Akagi did. Since you can't have red without blue, I purchased a Kaga through the Goodsmile web shop and after months of delays (US customs was suspicious of all these IJN movements) she reached my home port. 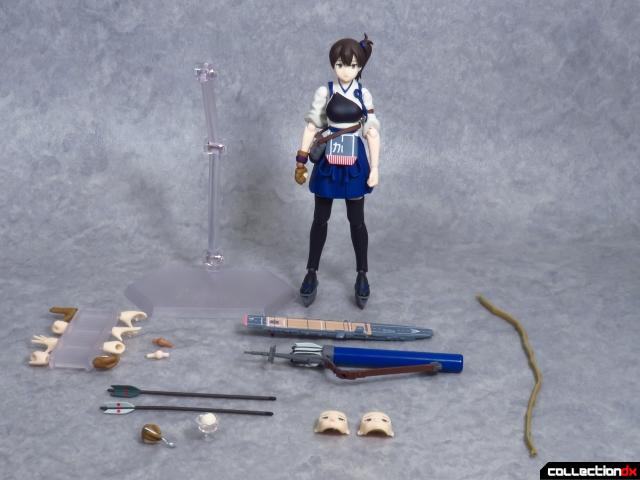 Here is Kaga with all of her accessories. She comes with all the same combat gear as Akagi but has far fewer character specific props. This can make Kaga seem like a much leaner release since she costs the same as Akagi. You get her bow, quiver, two arrows, her flight deck, a whole rack of extra hands, two additional faces, two spare wrist joints, a tiny frozen treat, and a figma stand. 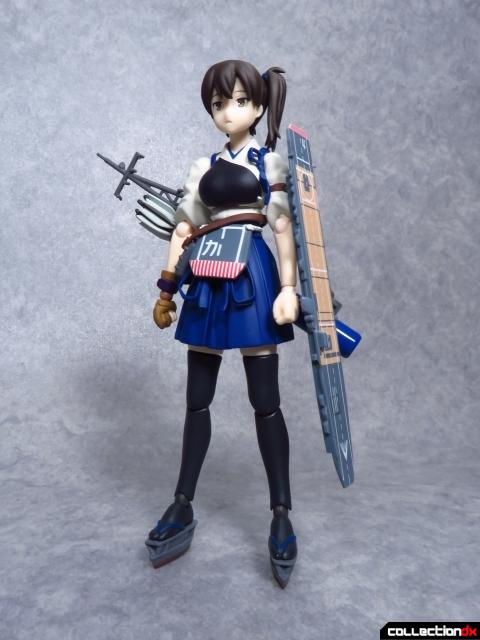 Here is Kaga with her nominal equipment. Like Akagi, she is an all PVC action figure with hard ABS joints that stands five and a half inches tall. 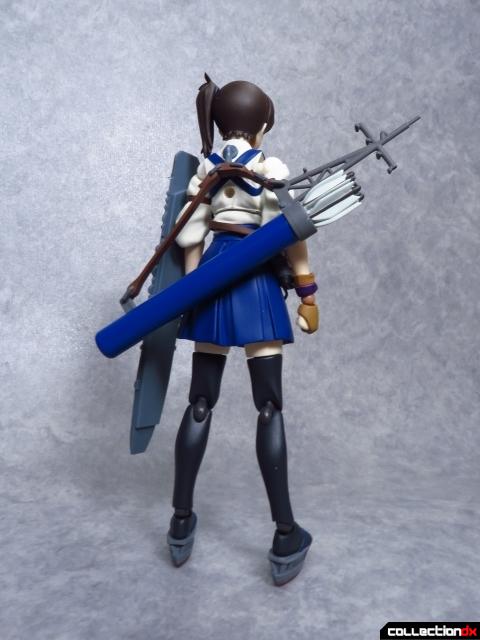 Naturally she shares a good number of parts with her red companion, but there are enough differences to make Kaga feel fairly unique and is in some ways a better figure. Most notably, Kaga lacks an awkwardly placed shoulder antenna and has much shorter hair. Also her carrier deck is attached to her left arm instead of the right. The quiver still has a non-moving strap and no ability to store the extra arrows. 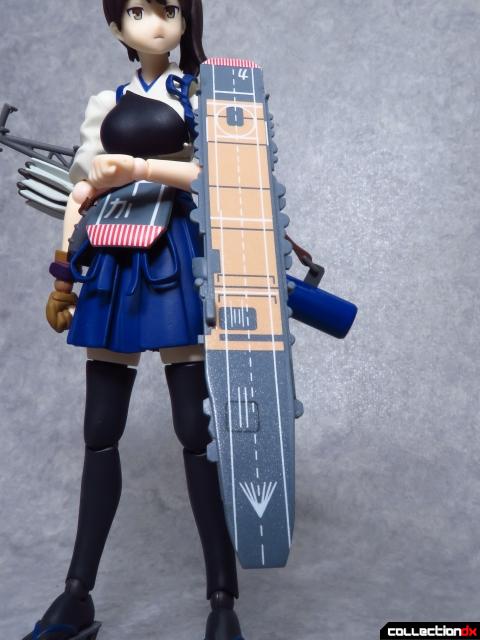 Like Akagi, Kaga's flight deck attaches to her arm with a small ball-jointed peg. I found this to be much easier to put on and remove than with Akagi. The deck is also shaped differently and features an elaborate tampographed runway. 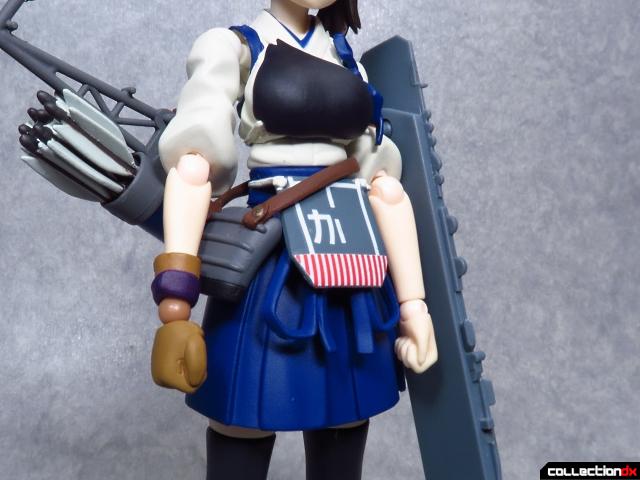 Even her waist protector is a bit different, as it is shaped to match her the real life carrier and even has a katakana "ka" for Kaga. 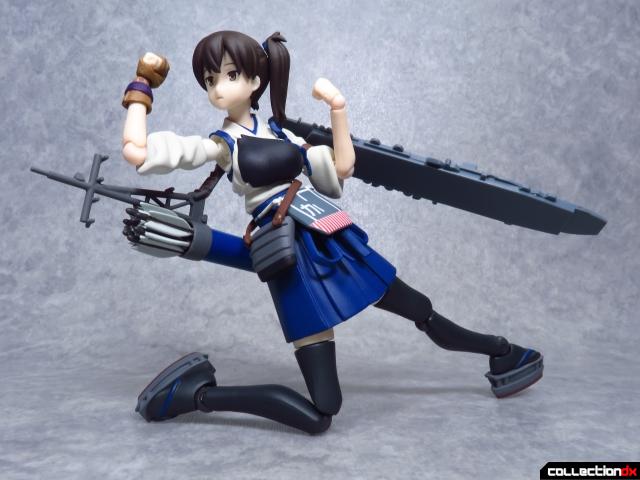 Kaga's articulation is largely the same as Akagi's but with one major improvement. Her shorter hair and lack of an antenna on one shoulder means Kaga can freely turn her head in any direction. 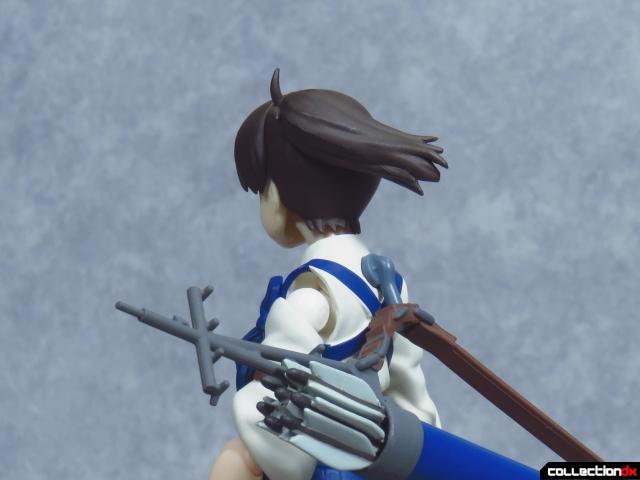 Also, Kaga's ponytail is on a ball-joint for extra emoting. It's on a rather small connection so I would advise being gentle in posing her hair. 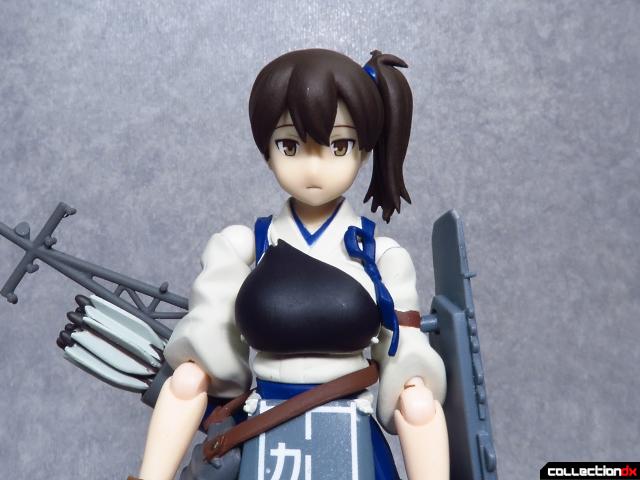 The blue colored Fleet Girl is usually portrayed as serious to be point of being emotionless. As such, Kaga's default expression is a powerfully nonplussed face. She uses the now standard setup where to change faces you simply remove the front part of her hair in order to pry off one part and then attach another. 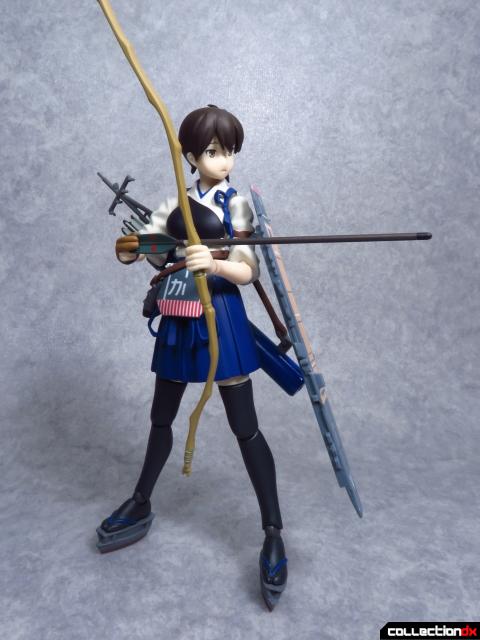 With a bow and arrow in hand, Kaga can easily replicate the pose from her in game art. 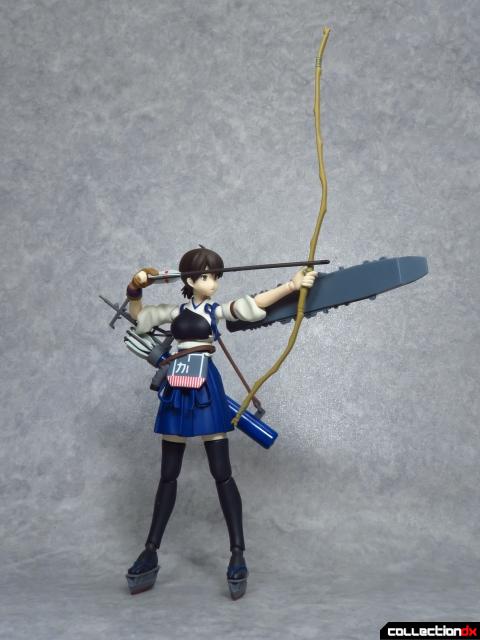 Lacking a pesky antenna and long hair, Kaga is also much more capable at getting into a proper arrow firing stance. 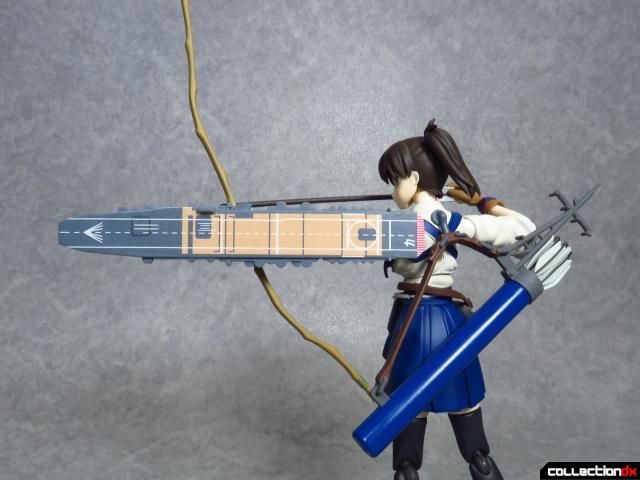 Changing which arm has the big boat bit is a simple idea that goes a long way in giving Kaga a different attitude than Akagi. Having the flight deck lined up with an arrow ready to shoot makes the KanColle interpretation of an aircraft carrier make more sense. 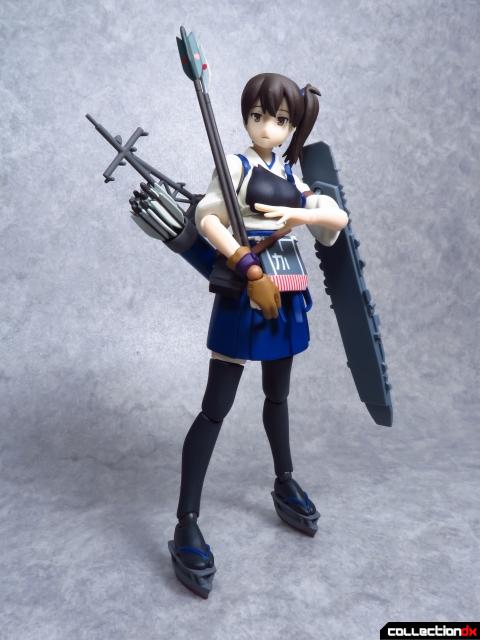 Like Akagi, Kaga has two arrows with different colored tails that are depicted as magically transforming into tiny airplanes once in flight. 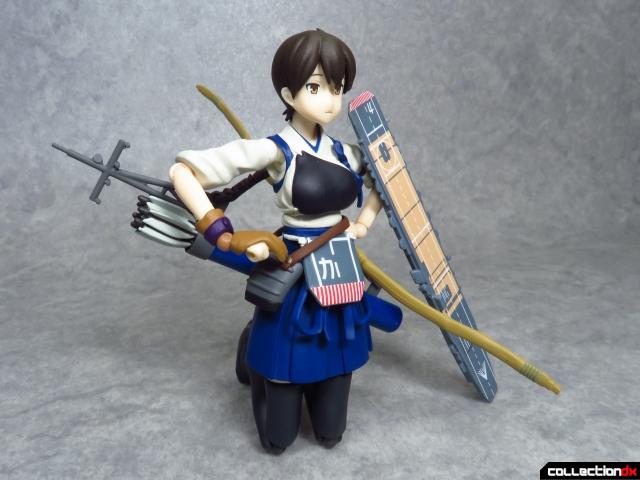 Kaga's whole look and attitude is based on traditional Japanese archery called "kyudo". In KanColle's spin off media such as the anime, Kaga can often be seen patiently waiting in "kiza" kneel while Akagi finishes practicing. The figma can handily do this to show proper decorum. 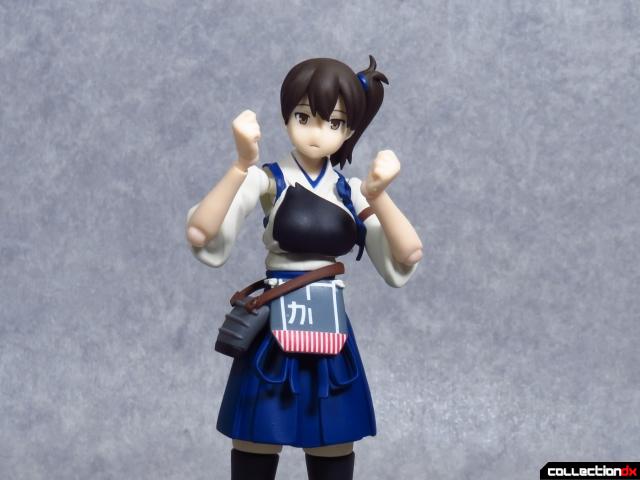 The spare flesh colored wrist joint allows Kaga to use all of the bare right hands she comes with. Simply pull the default brown piece and matching yugake cuff and replace it with the hand of your choice. As a modern figma, Kaga uses tiny universal joints for added flexibility. Personally I am not one-hundred percent for this setup as with some hands it can be difficult to remove these tiny things from the attached hand. 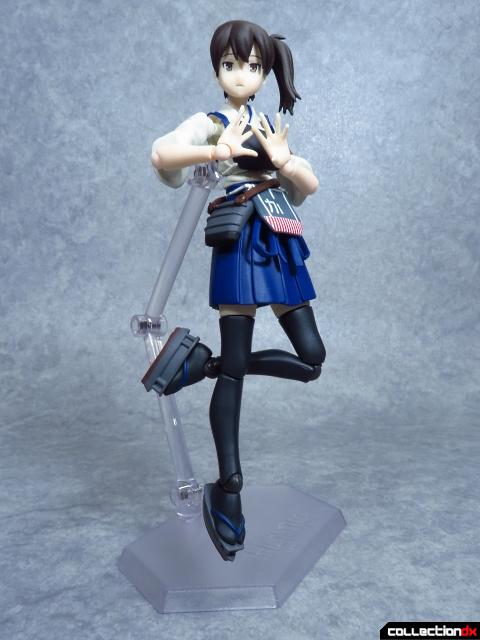 "Saying "kyun" should be reserved for airplanes in flight."

You can plug the included stand into Kaga's back easily enough. This allows her to *attempt* to act a bit more girlish but is otherwise not necessary for keeping her upright. Her fanciful boat shoes still have a nice flat sole so she can stand without additional support. 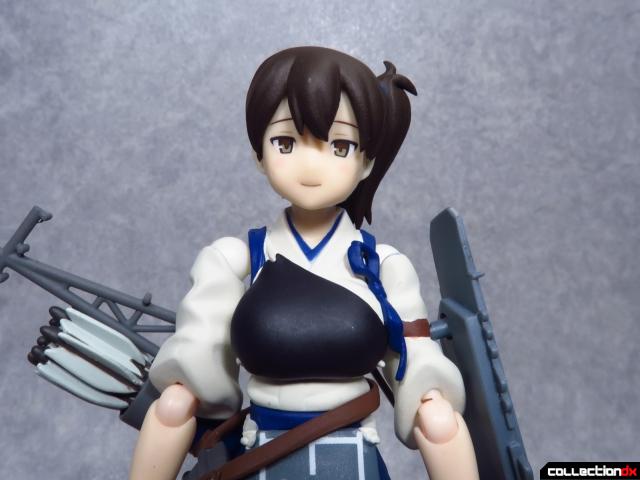 Kaga's second face has her smiling with a light blush. 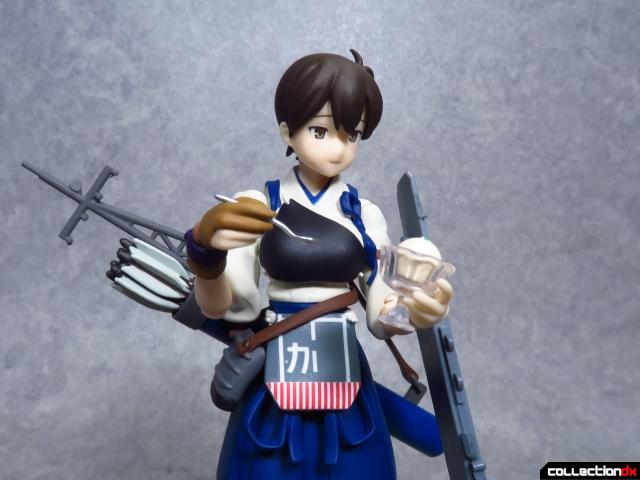 This expression is meant for when she is holding the included ice cream served in a classy little container. It should be no surprise that a cool headed carrier like Kaga enjoys an equally cool treat. One of her glove wearing hands has a small spoon permanently attached while the left has specifically posed fingers for cradling the clear plastic dish. While you can get Kaga to hold the dessert, I wish the container could be more securely attached to her hand, or even just glued in place by default, as it can fall out in the wrong position. 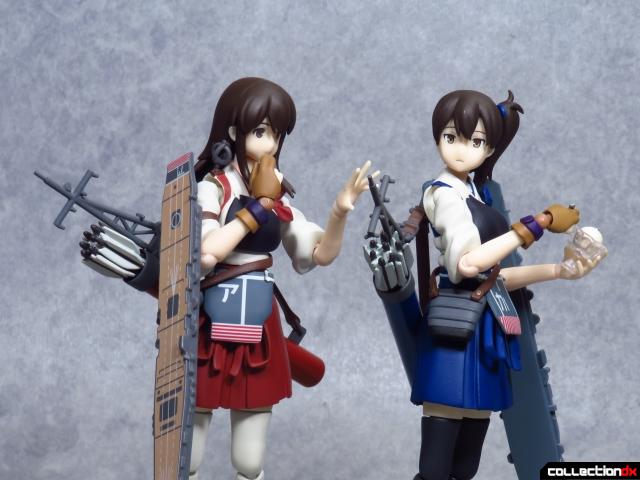 "Ahhhh~ Kaga-san! May I please have some of your-"

Kaga knows she needs to be ever vigilant around her gluttonous companion. 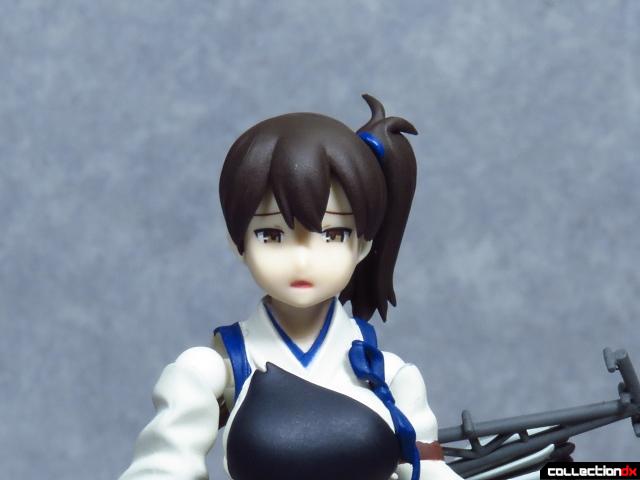 Kaga's final expression shows her being very upset when she gets heavily damaged in combat. This is possibly the most emotive of all three faces. 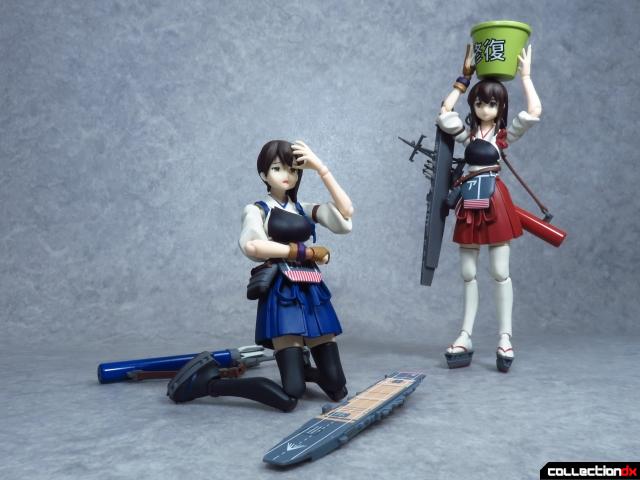 "Ah... To think a fleet carrier such as myself could lose so badly..."

"Don't worry, Kaga-san! I have just the thing to help you recover!" 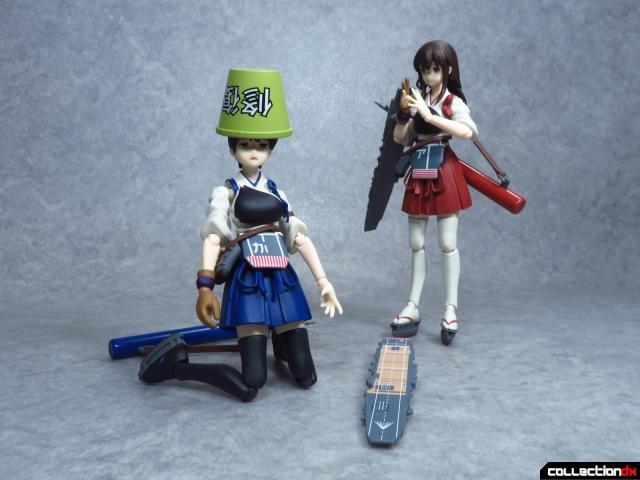 "For some reason only my head still hurts." 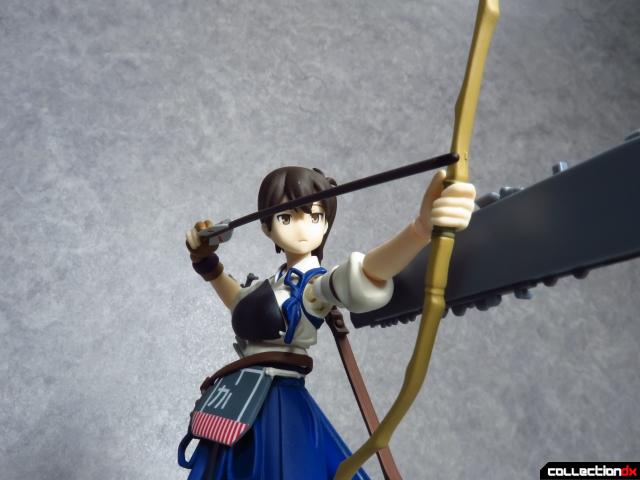 "This should be an easy sortie."

Overall, Kaga is another solid Kantai Collection figma who despite being a repaint and remold of Akagi, turned out to be a better figure. The few tweaks to her design resulted in a toy that is easier to handle than her mass-release partner. Unfortunately Kaga's status as an exclusive may mean paying a lot more than her original price when buying one on the aftermarket. Even buying her from the English side of the Goodsmile Online Shop was expensive, due to how they only use express shipping methods when you purchase from them. Still, I feel like my figma Akagi was just not complete without a Kaga to pal around with, so I took the plunge and am quite satisfied with her. 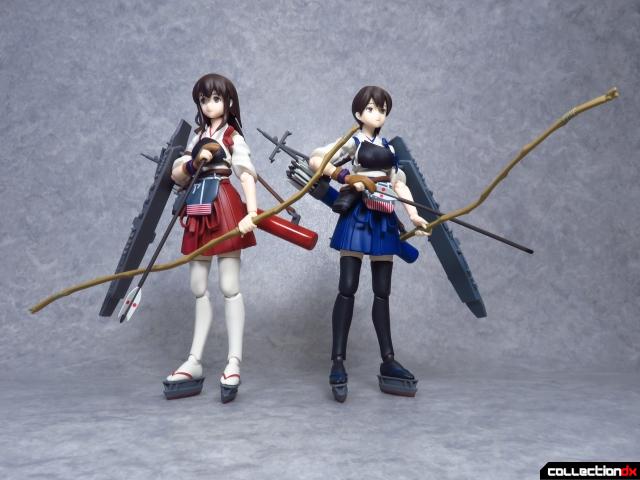 It's like a famous man once said, you just can't have red without blue.

As I'm not very familiar with the source material, I had expected her to be a mirror image of her sister, i.e. using her bow in the right hand with the guard on the left (is kyudo even taught that way to left-handers? I have no idea). But I think you are correct that having the flattop on her left arm actually works much better for the same handed-ness as Akagi. Somehow the dark stockings make her knees look less weird as well.

I want to ask if you have any info or opinion on how the fleet girl figures are being split up, with Bandai getting some in the AGP line and Good Smile getting some in the Figma line. My limited experience has been that Bandai can make a decent posable figure on their good days, but the details don't hold up well next to Figmas (and they are slightly different scales). From what I've seen of Yamato, it looks like Bandai was not having a good day at all...

So far it seems like Bandai gets the more elaborate Fleet Girls like Yamato and Musashi whereas Max Factory gets the more compact releases. Although with the upcoming AGP Atago and soon to be released figma Nagato, the division isn't as clear.

Atago is coming out soon and I intend to review her so look forward to more comparisons between Bandai and Max Factory on the KanColle front.

Are you planning on getting any of the microman destroyers as well?

I am not planning on getting any of the TakaraTomy figures. 1/12 scale is more my size.

I've watched two episodes of the boats, and it's earning a solid "meh" so far. But I just realized that Kaga's sis is voiced by Saki Fujita, which is kinda neat if you're a vocaloid fan. I wouldn't mind a crossover figure, a la Fei-Yen Miku HD!

I forgot if I've asked this before but will you be reviewing figma Shimakaze? Watching the anime now, I hope to see Naka, the idol one.