Gundam X: the only of the alternate universe trilogy to never air in the states and a series that some shy away from (which is a total shame ‘cause it’s seriously really good... NewType dolphins included).

With this, Bandai gives us one of the two main villain suits from After War Gundam X: the Gundam Virsago, more specifically its updated form Virsago Chest Break. The Robot Damashii line fully captures the essence and design of the Virsago while making a stout and supremely articulated figure with great playability. 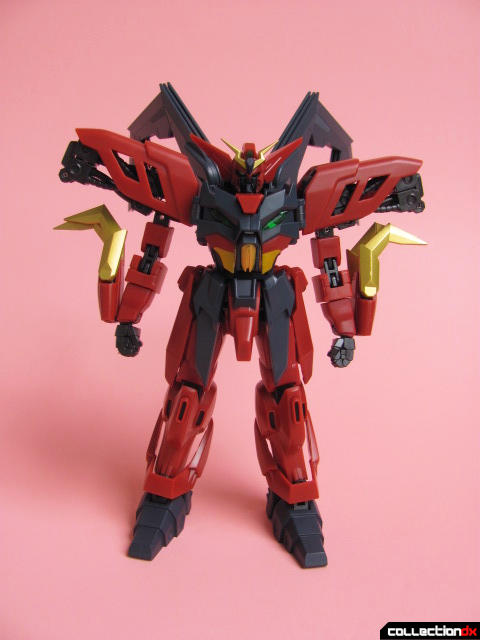 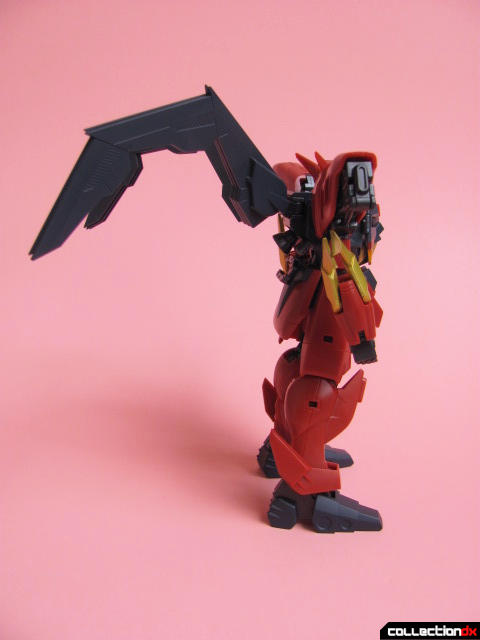 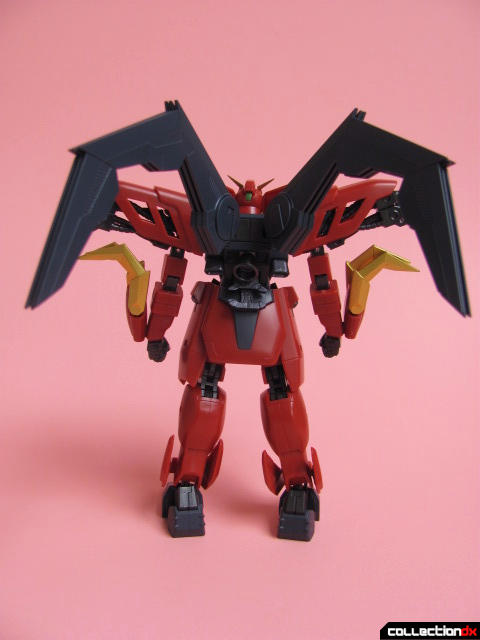 The Robot Damashii line has recently been going towards a more anime accurate depiction of mobile suits and other such robots in its line, and the Virsago certainly shows a movement in that direction. Its sculpt and presentation strongly emulate its onscreen counterpart down to the greebles in its arm pipes and grooves all over its body. The colors are deep and matte and play really well together. Even the mismatched blacks on its chest compared to its arms are accurate: 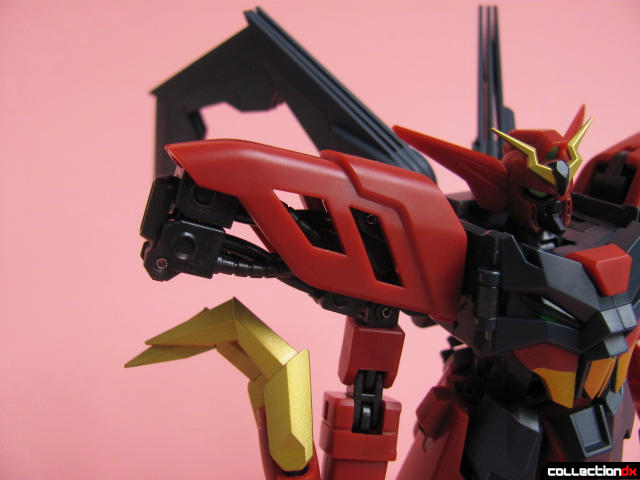 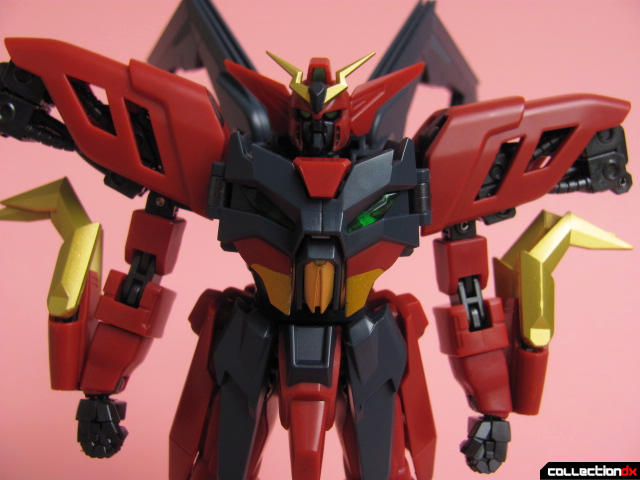 What’s not so keen, however, are the disruptive and obvious hinges for the Virsago’s chest covers and the pins on its arms. While not debilitating they do disrupt an otherwise clean silhouette and consistent color palette.

And while not as apparent, the Virsago also suffers from mold flash on its parts.

And where there is paint (most of it is plastic), it is tight and brilliant.

As with the Robot Damashii line, the articulation of the Virsago is WILD. Almost every joint is Figuarts or better with deep cuts, swivels, double joints and ball joints everywhere, and all being taut enough to hold any pose you can just about imagine: 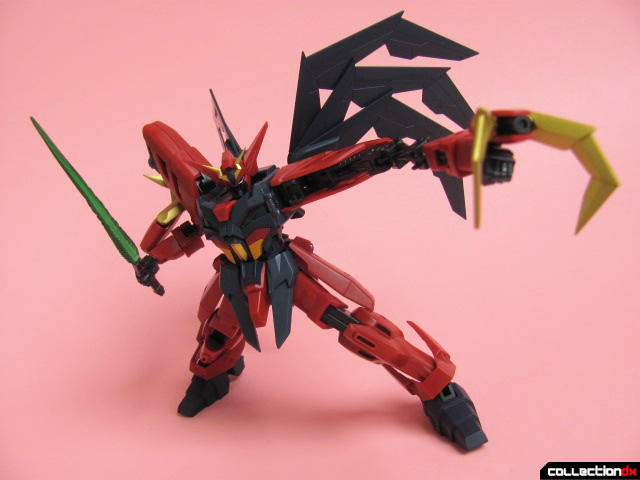 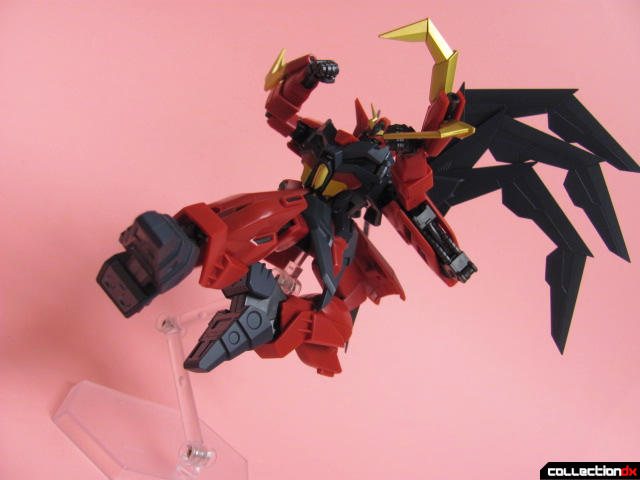 Much like the Leo, the Virsago just does everything. With a ball and hinge jointed head, ball jointed shoulders, double ball jointed chest, double hinged elbows and knees, double swivel forearms, ball jointed wrists, universal hips with thigh swivels, ankle rockers and toe joints, and swivel and ball jointed segments on its extendo-arms, this is one complete and super poseable package: 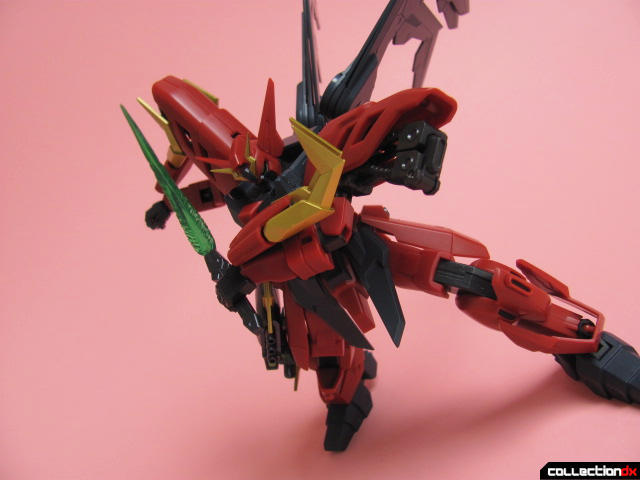 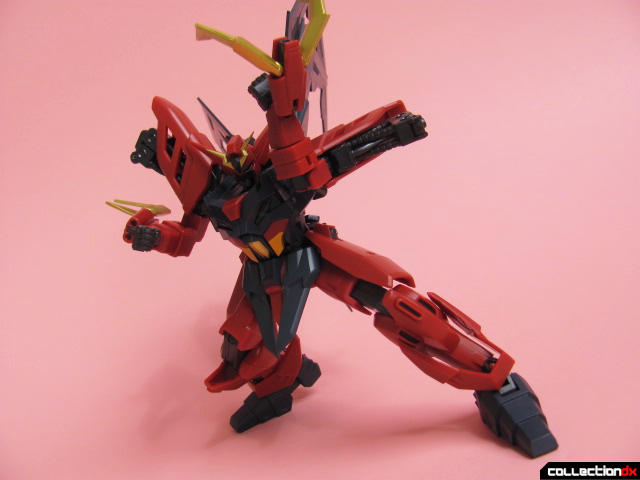 I mustn’t gloss over, however, that since this Gundam has a more complex design its own sculpt does get in the way a tad ‘round the shoulders. But otherwise? Explicitly poseable.

The Virsago stands at about 5.25 inches tall: 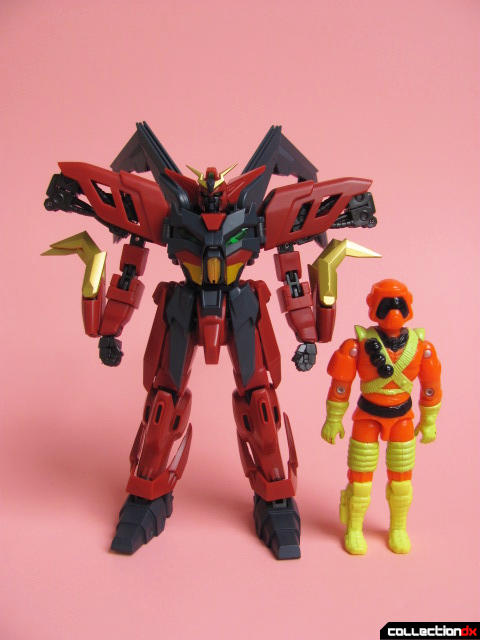 The Virsago—like other Robot Damashiis—is not in a common scale; its scale is basically “let’s make ‘em all about the same size” so it doesn’t pair too well with your HG Gundam X models: 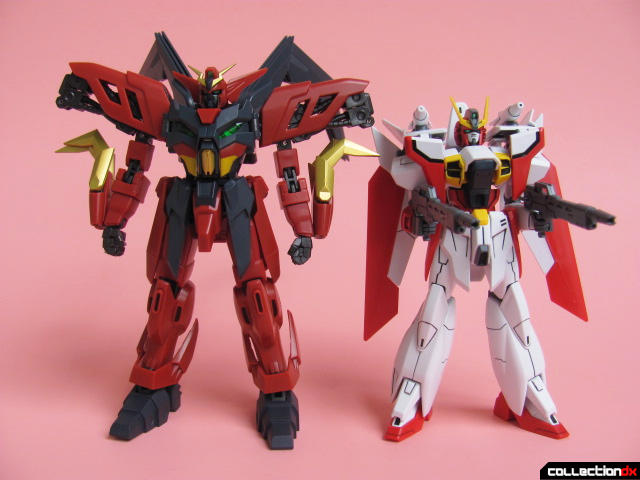 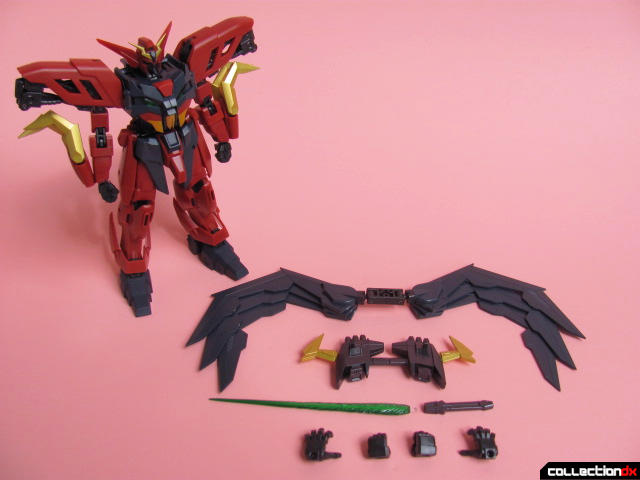 All of these accessories are equally brilliant as the figure itself. The hands are easily interchangeable and made of a slightly gummy plastic as to make holding weapons easy yet taut. The Virsago’s version of the Beam Harmonica disconnects and slides into each side of the holding hand: 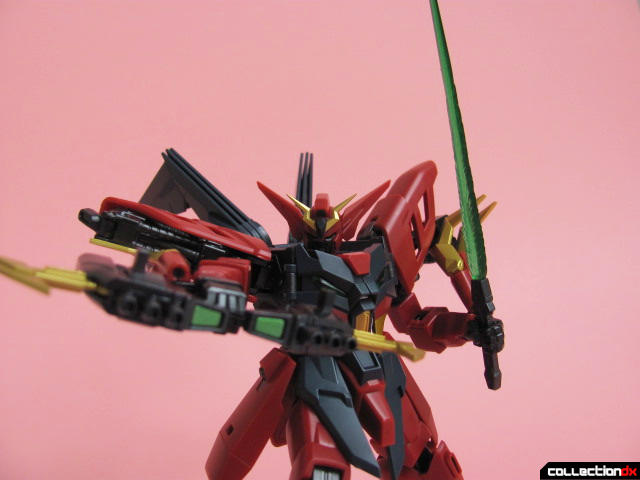 All of his accessories, too, can be attached on his person, a very nice addition: 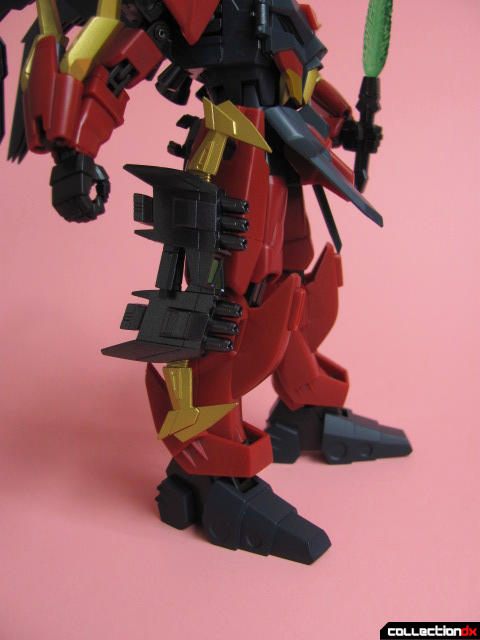 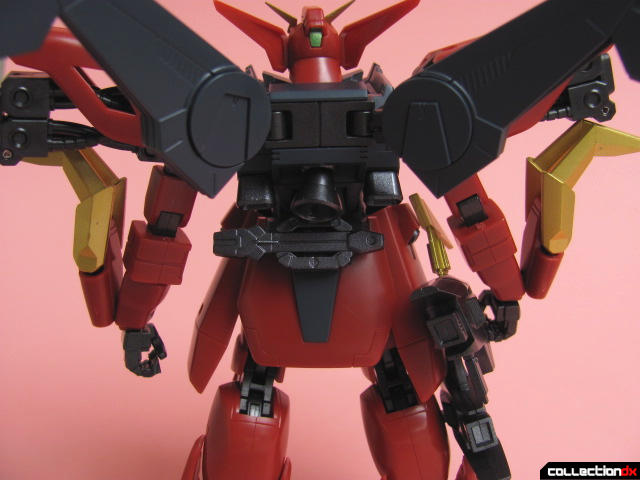 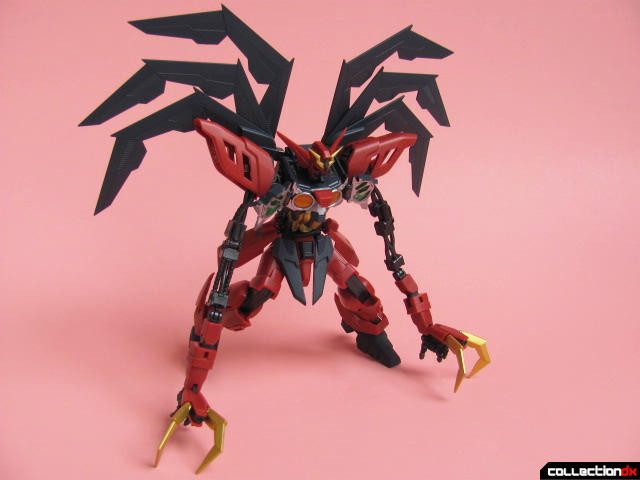 The Virsago’s arms unfold and go wiggly waggly all over the place and his Strike Claws also fold forward on a hinge. For a long, skinny extremities they are tight and can hold any position with ball joints and hinges. The chest opens up smoothly on a hinge and the torso pops up and clicks in place revealing the 3-barrel megasonic gun hidden in its belly. The fact that this is all part of the figure and it transforms well is extra nice. 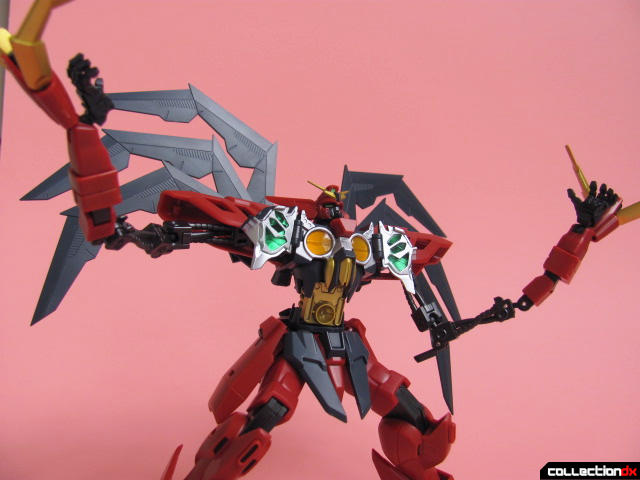 All in all, the Gundam Virsago Chest Break is an ace toy. With mega poseability, clean and accurate physical interpretation, and simply being excellent to play with, it hits every mark and is a solid and fun toy. If you like Gundam X or just appreciate its design then pick yourself one up.