Taurus Aldebaran is the kind-hearted, steadfast guardian of the second Temple of Sanctuary. When the Bronze Saints made their way through Sanctuary in order to save Athena’s life, Aldebaran tested the young Pegasus Seiya’s resolve and strength by challenging him to cut off one of the horns on his helmet. In pushing Seiya to his limit, Aldebaran teaches Seiya how to reach the 7th Sense. In later story arcs, Aldebaran becomes a powerful ally of the Bronze Saints.

The EX Taurus comes in a massive box. 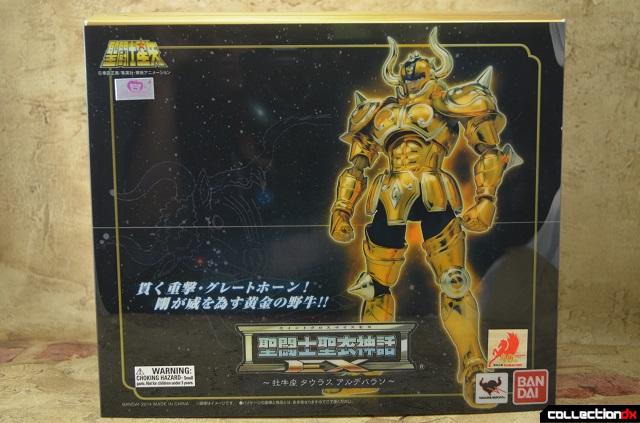 This is the biggest box in the EX line so far. For comparison, here is the EX Taurus Box next to the EX Cygnus Hyoga box. 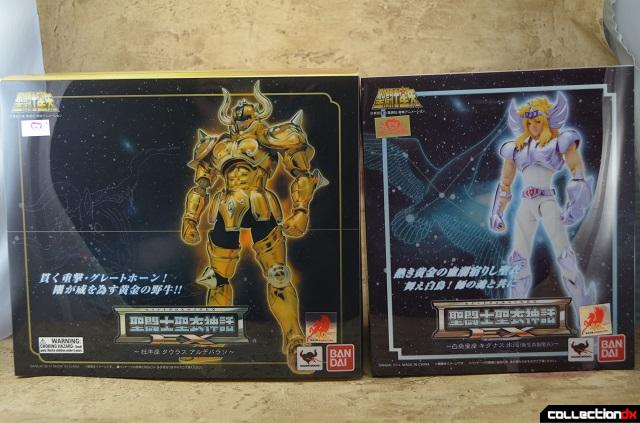 Under the sleeve, we have the box, which designed to look like the Taurus Pandora Box. 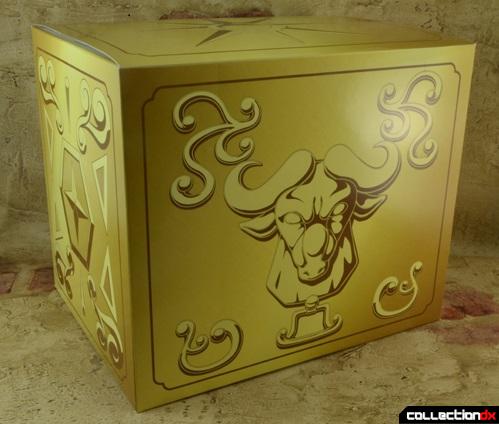 The Taurus Object Mode is a godlen bull. 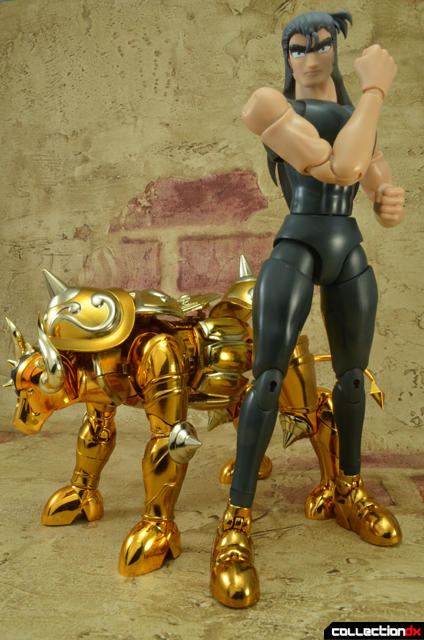 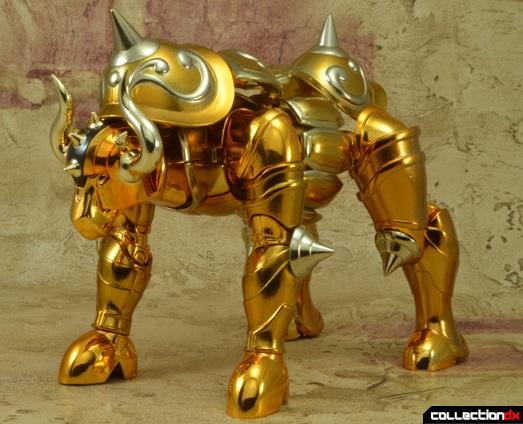 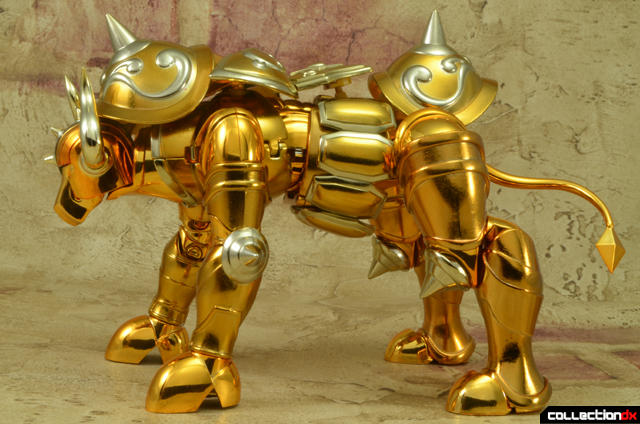 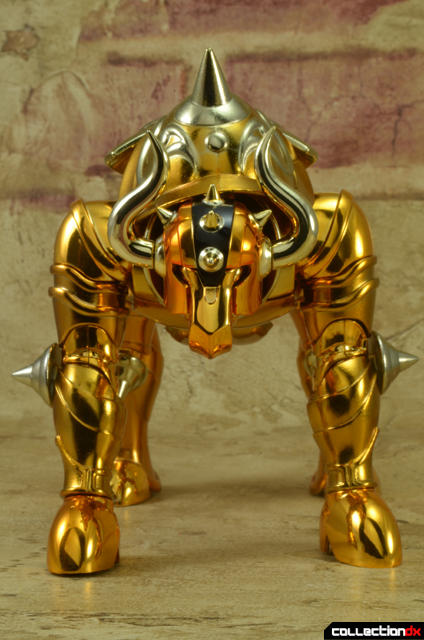 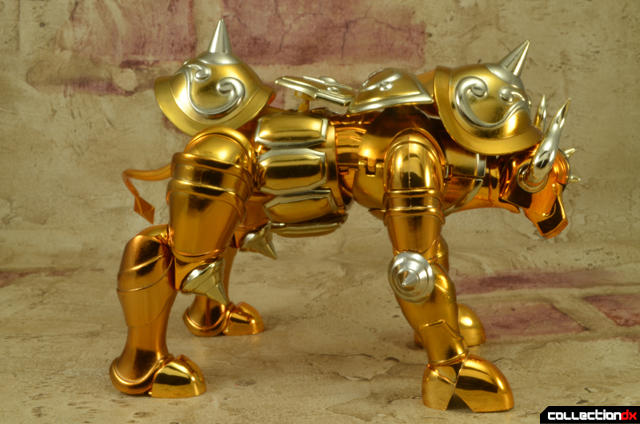 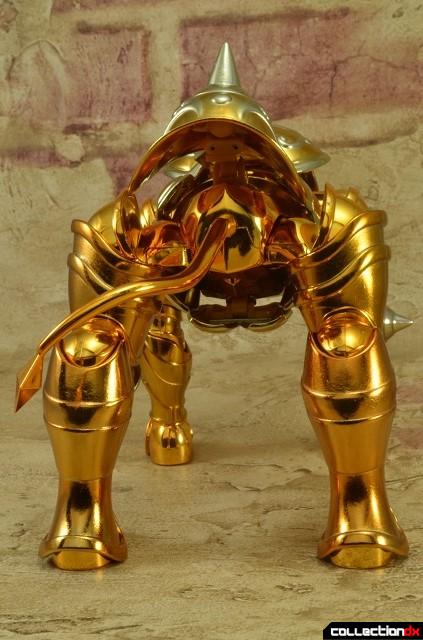 The EX rendition of the Taurus Object Mode looks better than the SCM version.  The SCM Object mode had one of the shoulder pads stuck under the head of the bull. The EX version has the shoulder pads attached at the top of the neck and waist areas. 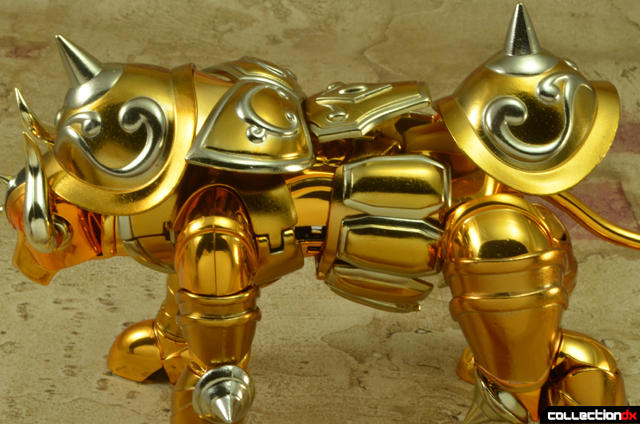 I looked for a while and could not find a good picture of what the Object Mode looks like in the anime.  So I can’t really speak on which is more accurate to the source material. In terms of looks, however, the EX version looks less abstract and has proportions that are more fitting of a bull. 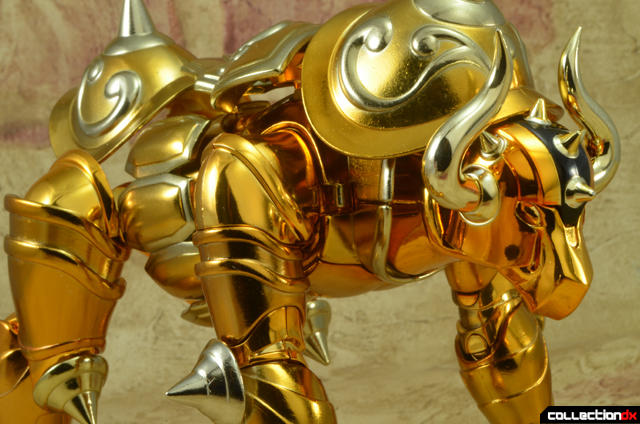 When Aldebaran dons his armor, he looks pretty decent. Since he is a character with a robust physique, I was a bit disappointed to see him rendered in the slim build that is the signature of the EX SCM line. 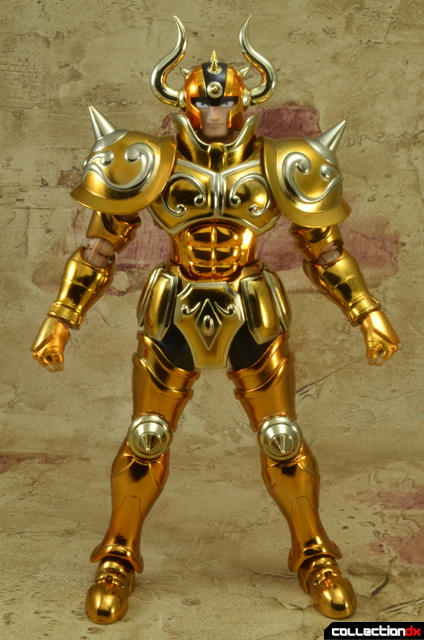 Even the EX versions face looks slimmer than it should. 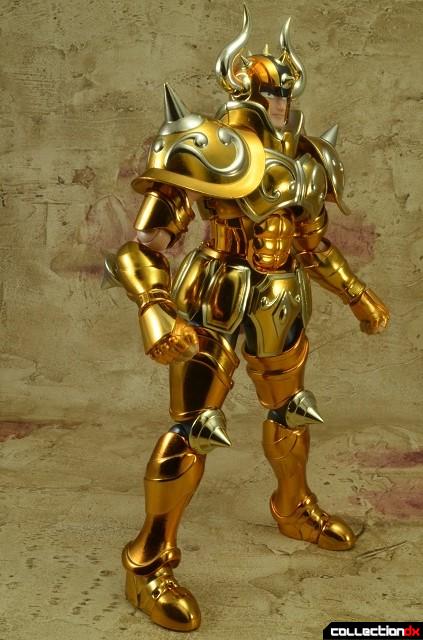 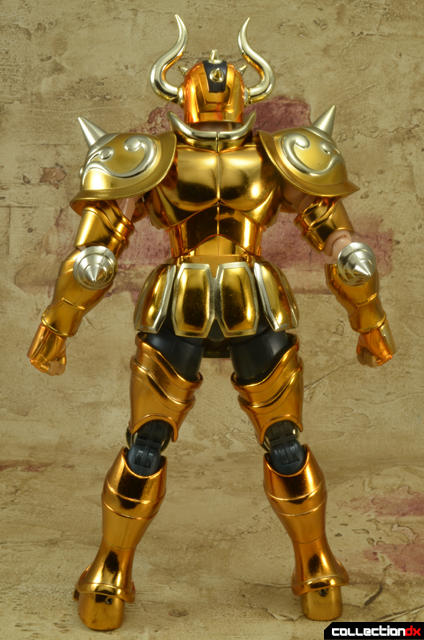 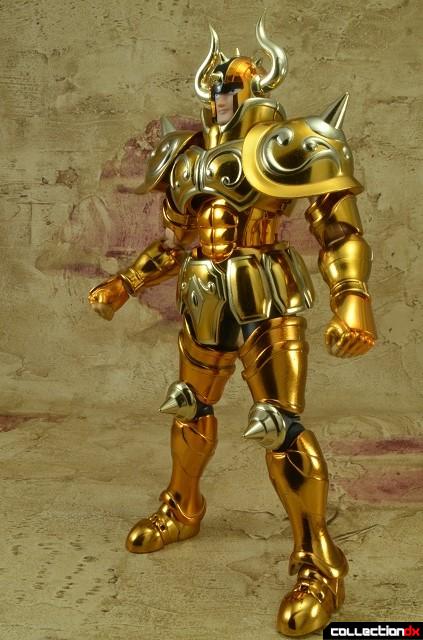 Now it is time to compare the EX version with its predecessor. 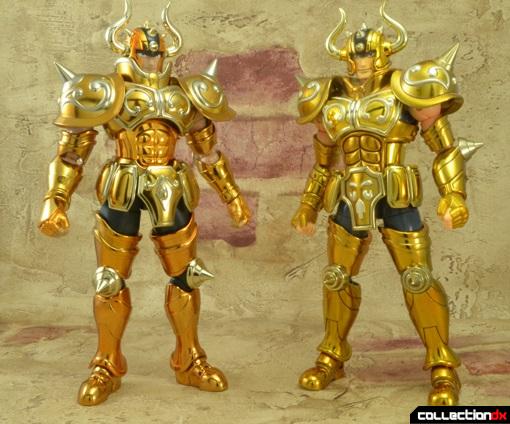 Interestingly enough, the EX Aldebaran’s skin is much more accurate to the source material. Aldebaran is a darker-skinned character of Brazilian origin. The darker skin tone is only one of several slight improvements made over the original release. Besides the primitive looking face sculpt, I still think that the original toy holds up well. 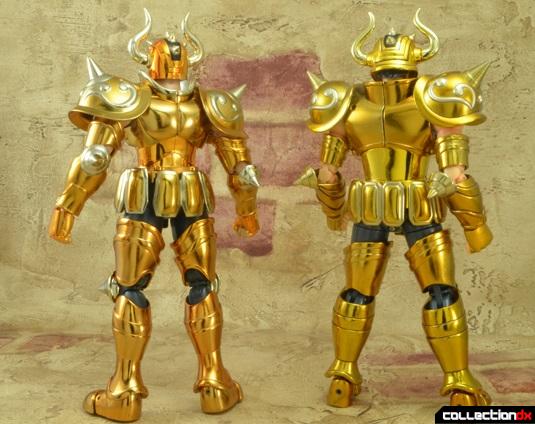 Aldebaran has the usual Saint Cloth Myth EX body articulation.Furthermore, the engineering for the armor is very good. 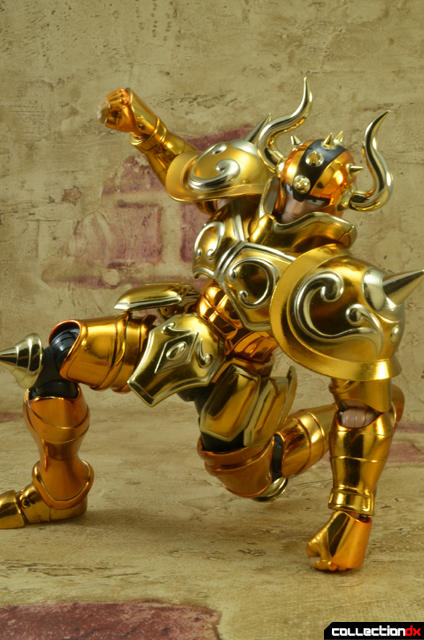 The shoulder pads allow the upper arms to move a good amount. But the large dome-shaped pads do not allow the Saint to move his arms much more than this. 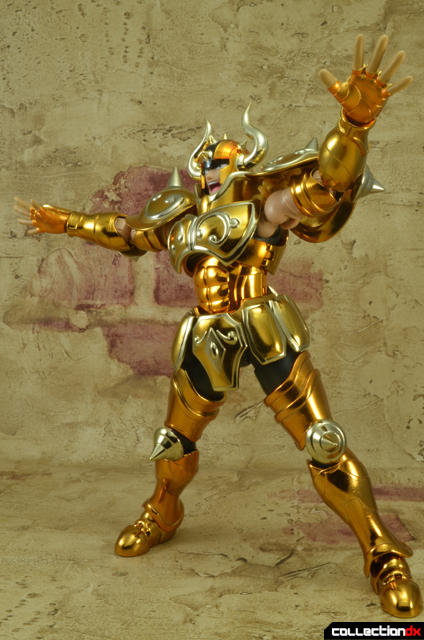 But he can still pull off the Great Horn without any real issues, so I can't complain too much about the restrictions that the shoulder pads place on the toy. 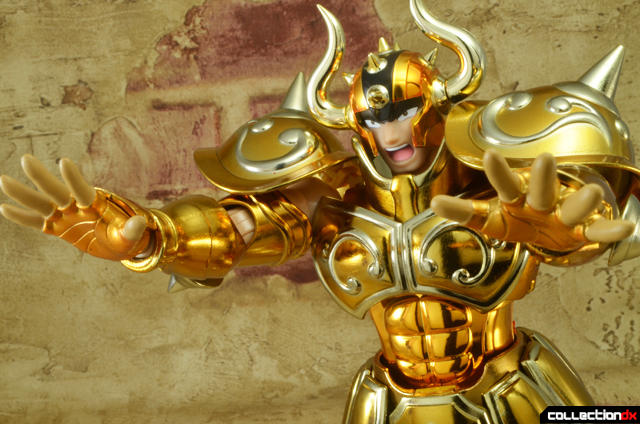 My personal favorite is the articulation of the side skirts. During the run of the EX line, Bandai has only given a few of the EX Gold Saints fully articulated skirt armor. It feels like Bandai arbitrarily decided which characters needed full use of the lower limbs when fully armored. Luckily, Taurus is a character that the Bandai engineering gods have smiled upon. Thus he has skirts that move and twist in all sorts of ways and allow this lumbering Saint to move his legs very freely. 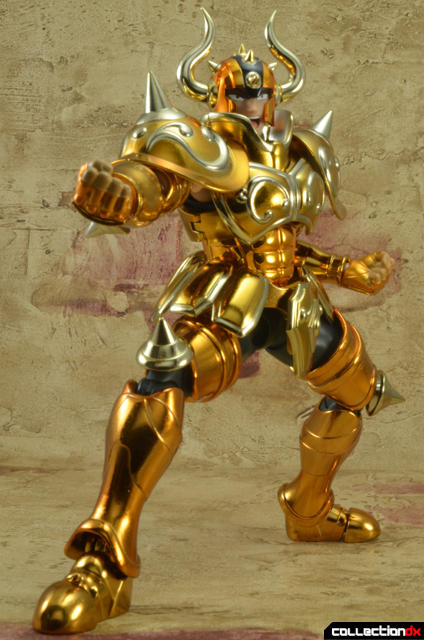 He can even peacfully repose in front of the Taurus Temple. 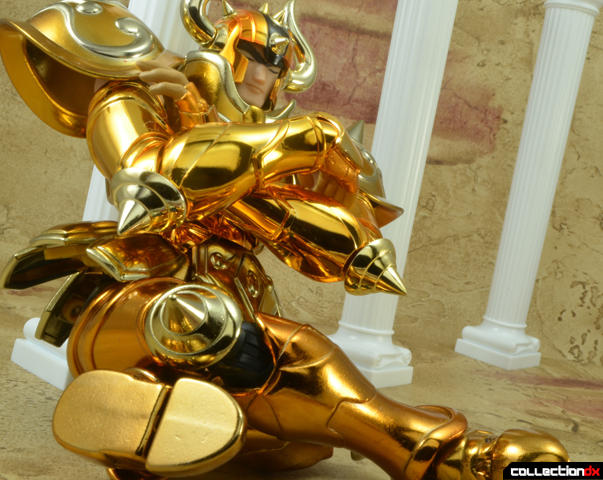 Taurus also comes with a good amount of extras. 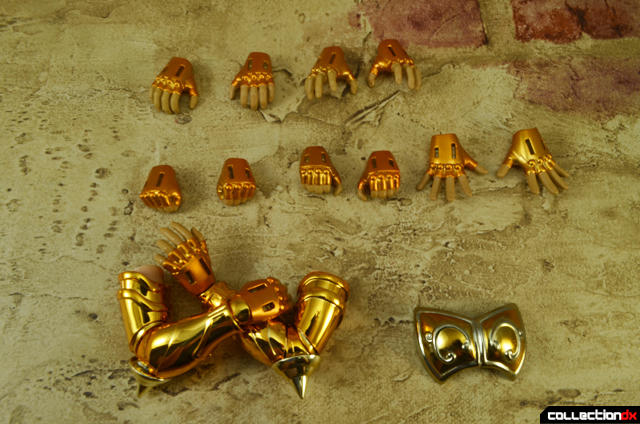 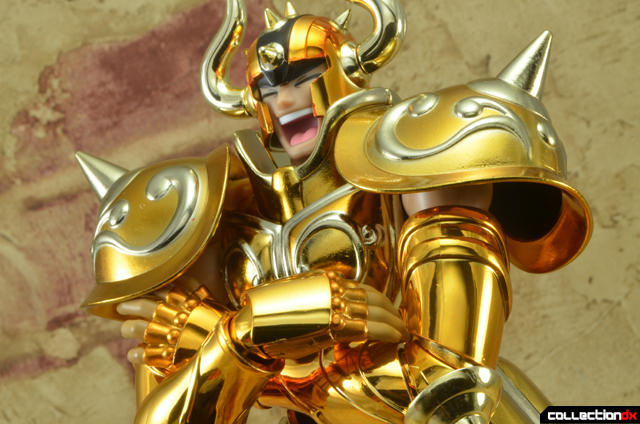 Using the crossed-arms arms, you can also make Aldebaran look like he is practicing some funky Kung Fu. 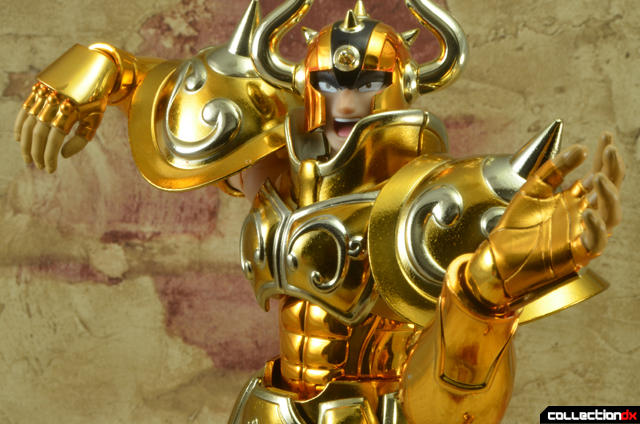 The faces for this release look very cartoony, in both a good and bad way. While the look of the faces clearly give it an anime look, the clean look of the face makes him look less rugged and more bishounen than how he appears in the anime.

One of the faceplates is a blacked out face, which still manages to have a unibrow. 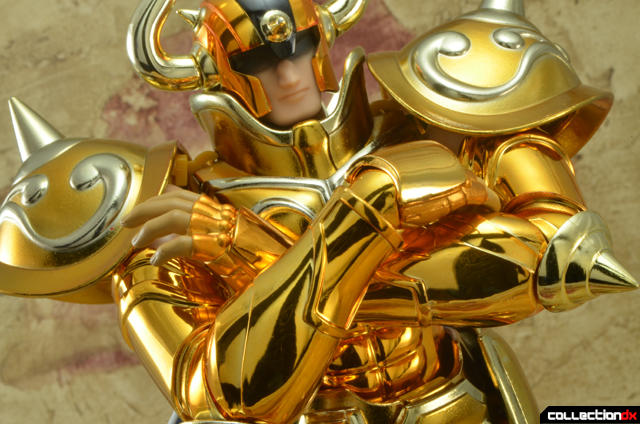 Who could that mysterious Saint be?!

He also comes with a standard 3-piece plastic cape. 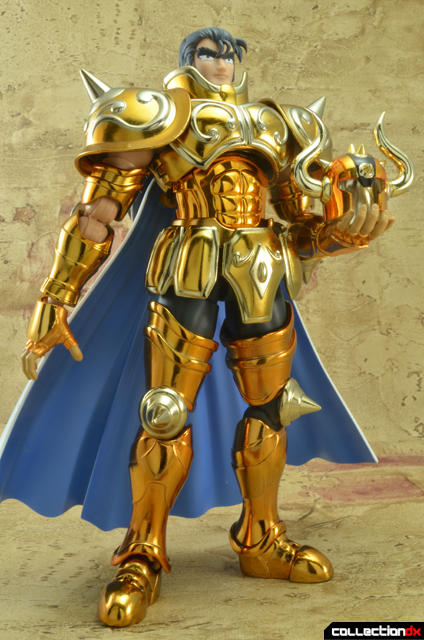 On the downside, the cape for Taurus lacks the range of motion that the other capes for the EX Gold Saints had. The side pieces of the cape barely move laterally, though they do move up and down a substantial amount. However, their lateral restriction, makes it hard to fan out the cape.

Finally, Taurus Aldebtran comes with a spare left horn that is shorter in length, to represent when Seiya cut it off. 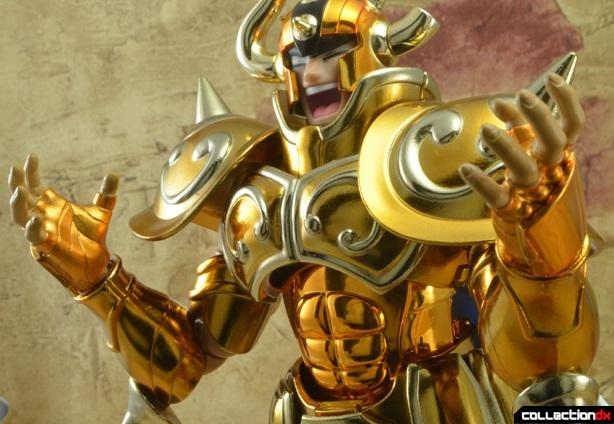 Plastic is kept to the bare minimum in this release. Only the few things highlighted in red are made of plastic. 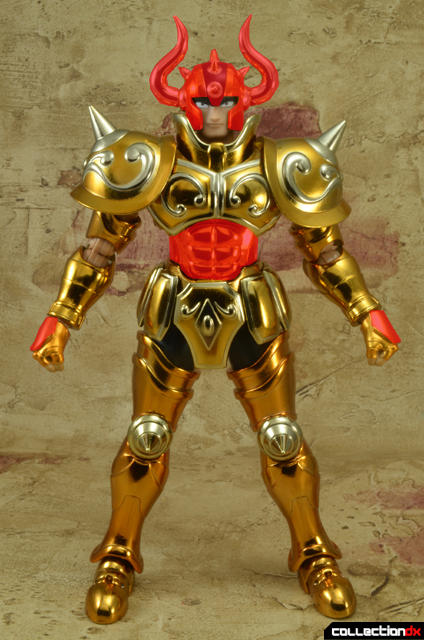 So here we are at the penultimate EX Gold Saint. It is a good release.  However, I am still left a bit unsatisfied because of the fact that I was expecting the EX Taurus Aldebaran to be a bit bulkier to better represent how the character looks in the anime. In his EX fomrm, Aldebaran looks like he lost a few pounds in order to make a lower weight class for an upcoming fight. In the end, he still looks like a formidable fighter, but not quite how you remember him looking like in the anime. 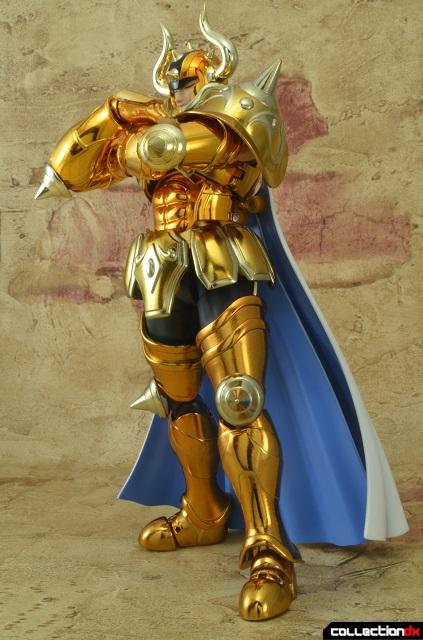 Our old big unibrowed friend got a beautiful release. The crossed arms are a very nice addition.

Deba-chan is a nice character, too bad he always loses his battles. Allowing Seiya to pass on was a good insight, especially since other presumably more powerful and wise Gold Saints just had no doubt about the Pope until they almost killed our Bronze friends (Shaka, I'm looking at you)..

The funny thing about his old 1987 figure is that his mentioned dark skin tone was not only ignored (probably because of the mass production of Saint Seiya figures), but also he was unexplainably blond (it was pretty strange to see that on TV commercials):

As always, that was a nice review. I've seen some criticism concerning to the height of his cape (they say that it should be bigger and seems to begin halfway on his back). As you didn't even mention it, it seems it's not an issue for you (and seeing his wonderful pictures, neither for me). Besides that, it's odd seeing an EX figure that is actually the same height as his old Cloth Myth version.

At last, the addition of an extra chest plate was a good insight. You can even pretend that is simulating the size changes we always see on the show (which affects both characters and armors). In the beginning, I really thought it was included because of that, lol

How about that. A blonde Aldebaran. Perhaps they went off his hair color in the manga.