The Kamen Rider Taisen ft. Super Sentai movie introduces several movie-exclusive trains for the Ressha Sentai ToQGer. The movie features two trains that are based off previous Super Sentai. One such train is an alternate form of Gabutyra, from Zyuden Sentai Kyoryuger, known as the Kyoryuger Ressha. While the trains that appear in the actual ToQGer TV show are part of the DX Ressha Gattai line, the movie exclusives are sold under the EX Ressha Gattai line. So the Kyoryuger Ressha falls into the latter category. 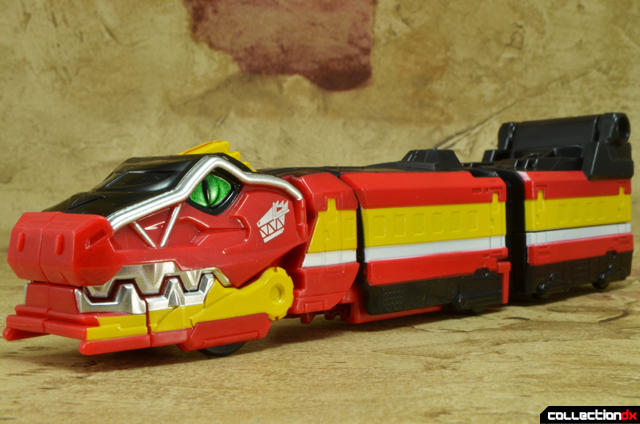 The EX Ressha Kyoryuger Ressha is part train and part mechanical T-Rex. The molded details of the train are nice enough, you know, for a $10 train.

The paint apps are good considering the small size of this train (1in X 1in X 6in) and the price point of said train. 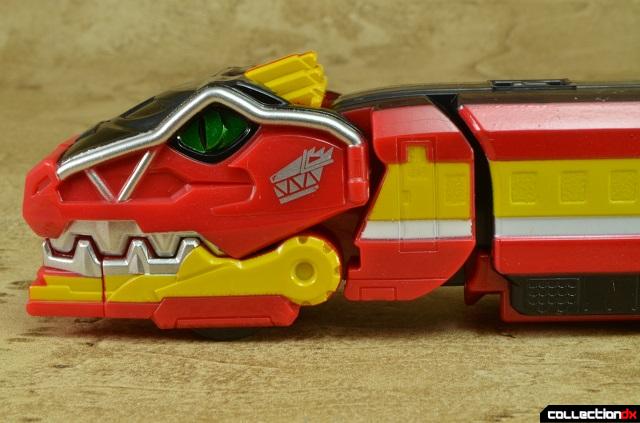 The Kyoryuger logo on Gabutyra’s cheek is a nice touch.

The top of the train looks pretty plain, as it is mostly black.

The bottom of the train features some wheels for rolling the train around, some raised bits that the ToQ Changer reads, and also a couple of hitches.

This time around, there is no square opening at the rear of the train. 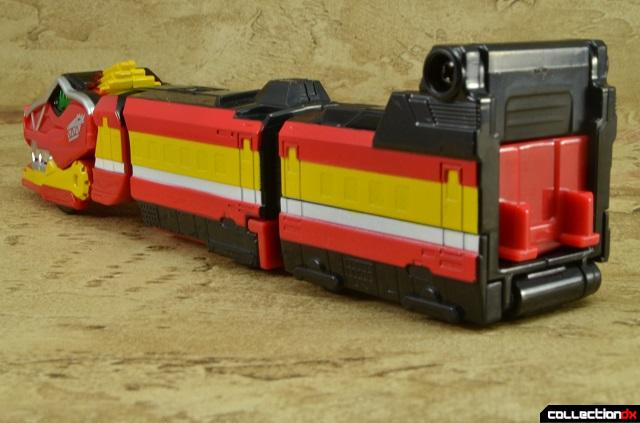 From what I have seen, there is really no difference in terms of quality and build between the EX and DX Ressha Gattai lines. The only difference is where the train appears in the ToQGer story continuity.

In train form, the Kyoryuger Ressha has a couple of play features.

First, the mouth of the Gabutyra can be opened up, so you can get some chomping action going. 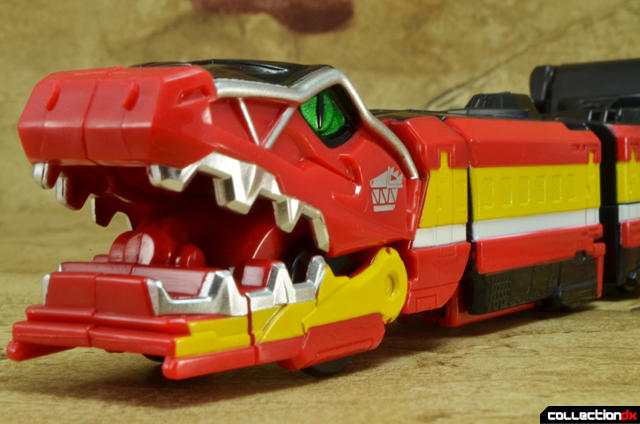 Also, like the other trains in this DX Ressha Gattai line, you can separate the Kyoryuger Ressha and link the train pieces using the hitches and a circular hole on the underside of the train.

The ToQ Changer has a couple of sounds that it will produce when the Kyoryuger Ressha is inserted into it. For those unique sounds, check out the video review. 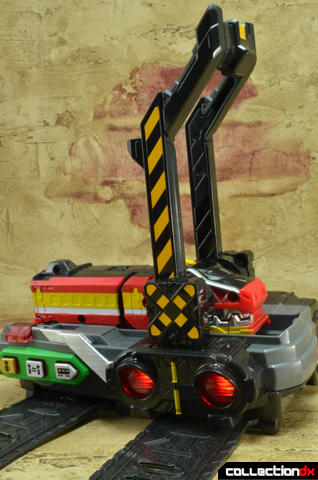 ToQ-Oh Kyoryujin
Besides doing its train thing and interacting with the ToQ Changer, the Kyoryuger Ressha can also combine with the ToQ-Oh. 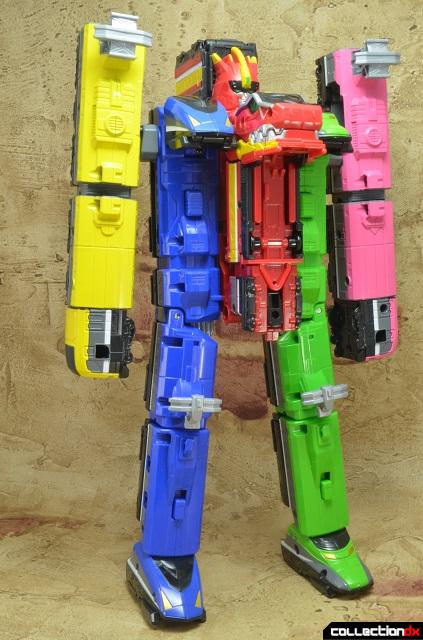 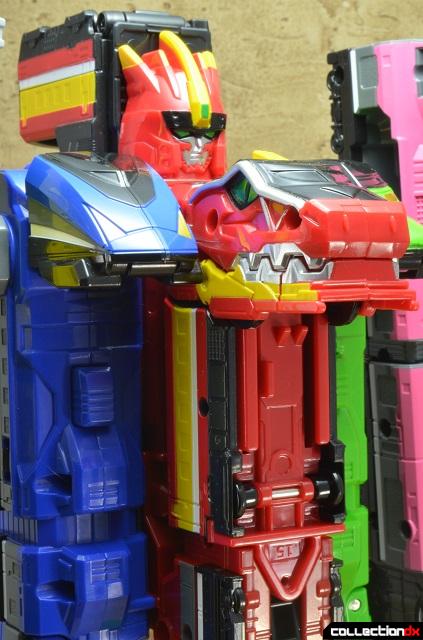 My only real gripe with this combination is that we now have two piece of train just sticking out of the rear of the robot. 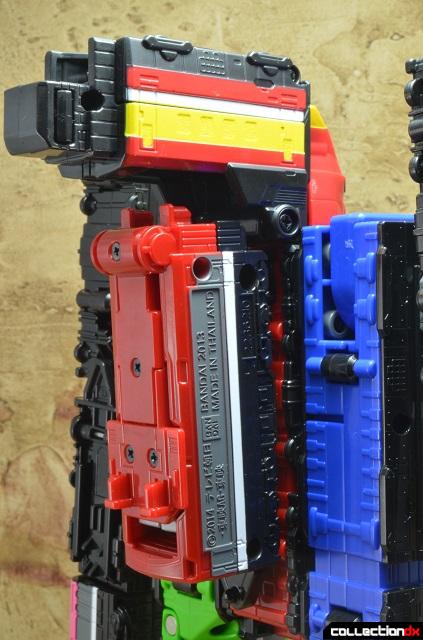 Luckily, this is not as noticeable from the front. 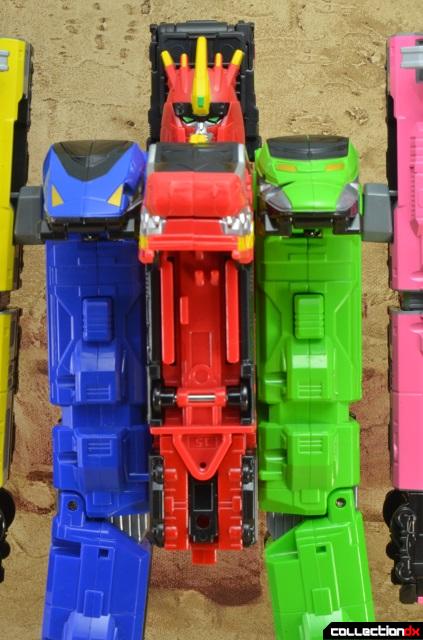 I am really digging the EX Ressha Gattai line. It is this year’s Super Sentai line of gimmick collectible toys and it is a lot more engaging that previous year’s gimmick collectibles. Ranger Key’s and Dino Batteries just never really got me excited about collecting each and every one of them. However, the fact that the EX Resshas are pretty good looking trains for their price point, they  interact with the ToQ Changer  and can combine with the ToQ-Oh is just plain awesome! 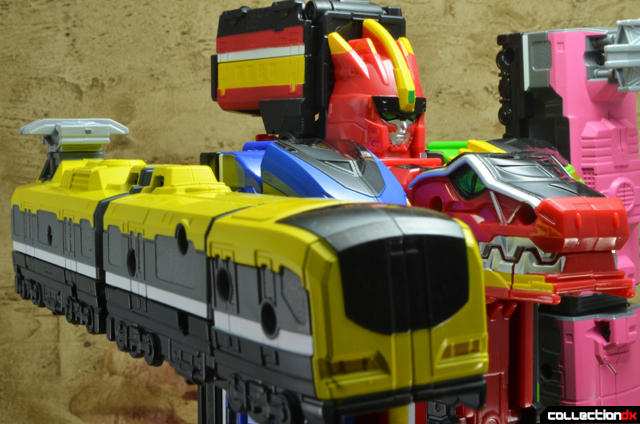 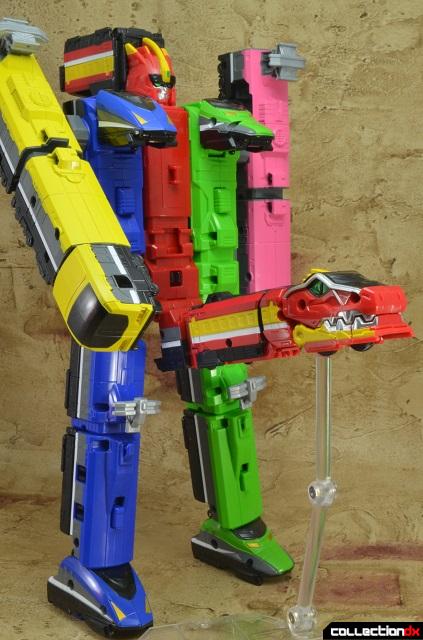 I feel like the Sentai Ressha (and one Kamen Rider Ressha) should make the appropriate Henshin noise on the changer. For example, instead of saying "Kyoryuger Ressha!", it should play samba music.

My nephew used to love that show, luckily not any more now that I've seen this.

Seriously, why more train wang?! These Sentai series keep getting weirder and weirder.

They actually only showed the train wang in one episode of ToQGer, which I am sure won't be in the US version... As for my reviews, I can't stop taking pictures of train wang. I think it's an illness.

That would be pretty sweet, but it would require the ToQ changer to have larger memory unit. Especially when you consider we don't know how far back they will be going with the Super Sentai trains.

Dino wang. Better than the demon wang from that giant black devil creature in the last part of Yugioh, the one where everyone is sucked into an RPG of the past.