Metal Armor Dragonar is a fondly remembered mecha action series from the 1980's that is very similar to Gundam in many respects. A space based empire attacks the Earth in the name of independence while the good guys fight back with a trio of high powered prototypes which can only be piloted by some punk teenagers. Additionally, the show featured robot designs by the famous Kunio Okawara and produced by Sunrise which further highlights the show's link to the popular V-finned hero series.

Dragonar-1's pilot is a young man named Kaine Wakaba who controls the eponymous Metal Armor. As the series progresses, his machine is upgraded into the Dragonar-1 Custom with the already eye catching design becoming ever more awesome. Now the D-Team leader is ready for any biker punk themed space ruffians.

While there have been a surprising number of Dragonar toys lately, they were all part of the beleaguered Soul Spec line and had been relegated to the world of web exclusives. Not wanting a fan favorite series to go unloved, Bandai has decided to relaunch Metal Armor figures as part of Robot Damashii. 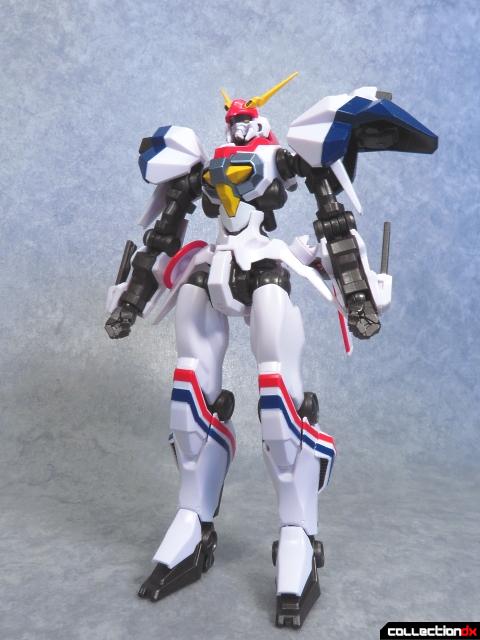 The Dragonar-1 Custom (or just D-1) stands roughly five and a half inches tall and is the first Metal Armor to become a Robot Damashii toy. I find that the switch over from Soul Spec to this line has done nothing but benefit Dragonar figures as this toy will soon demonstrate. Free from the need to removable armor to expose its inner skeleton, the D-1 Custom is a very solid action figure with nothing feeling like it will fall off if mishandled. 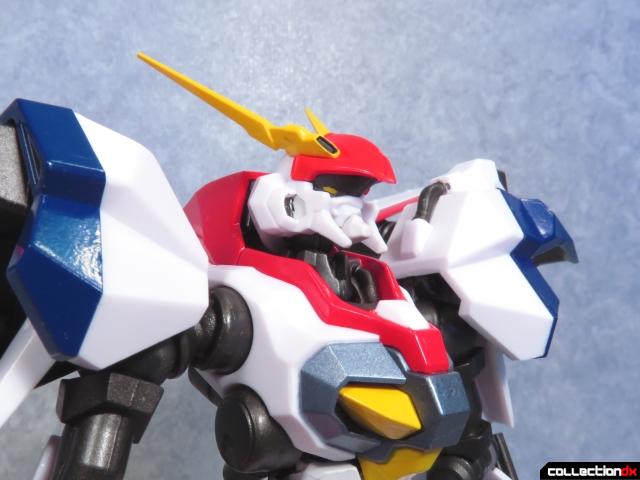 While Kunio Okawara may have created the D-1 Custom, it is the distinctive style of talented animator, Masami Obari, that stuck with the design. Obari's work on the show's opening sequence demonstrated his skills at giving giant robots a dynamism that was rarely seen in anime at the time. As such, the Robot Damashii figure draws heavily from his artwork and not the line art with its more pointed features and chiseled form evoking the look and feel of a muscular warrior. The sculpt is quite fantastic and the paint work is mostly spot on. My figure has a minor quality control mistake where there are some tiny splotches on the gray part of the chest. However, these imperfections are minuscule and do not detract from the overall piece. 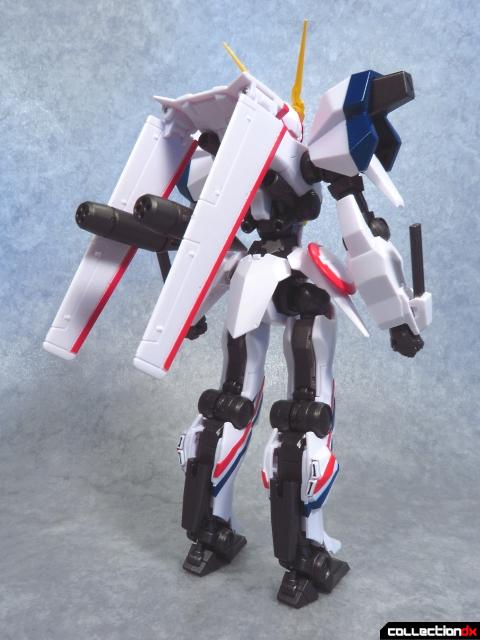 The most notable change from the normal D-1 to the Custom version is that its Lifter backpack is now fully integrated into the body. You can fold the wings down for storage but they cannot be removed. 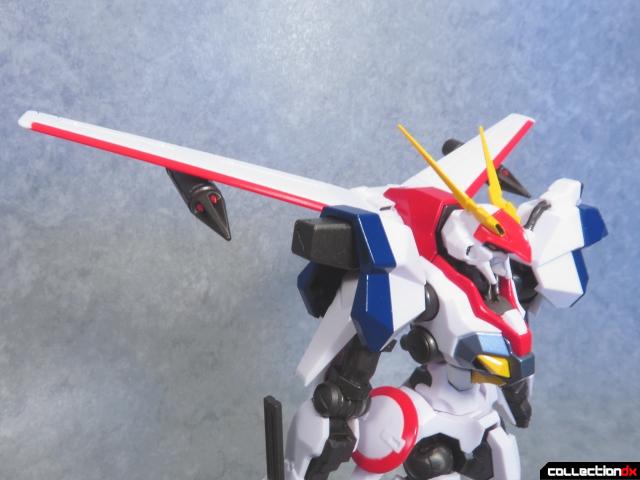 D-1 Custom has a wingspan of about five and a half inches making it about as wide as it is tall. 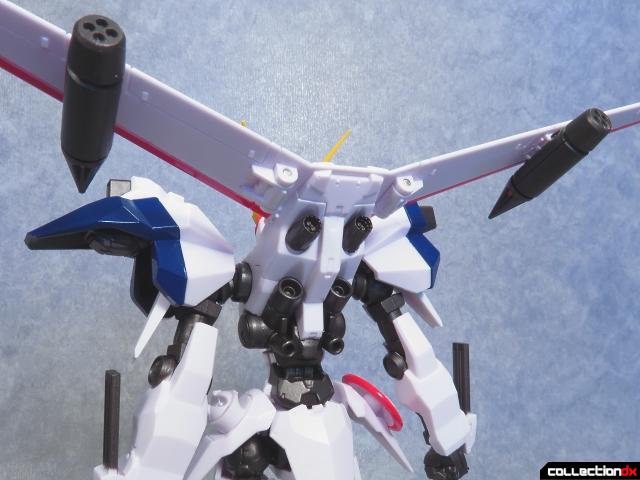 For air-to-air weapons, there are two non-removable missile pods mounted on the wings. On the backpack, all of the small engines nozzles are present but do not move. 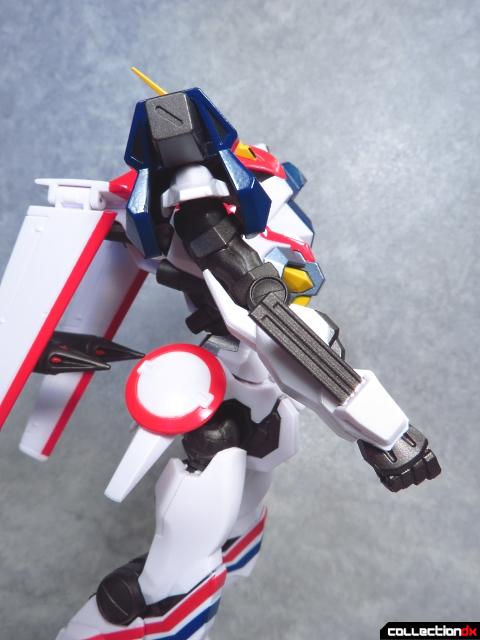 The D-1 Custom also carries a number of munitions all over its body. However in order to simplify the figure, Bandai made all of these non-removable unlike on the Soul Spec Dragonars. The small rectangular bomb in the shoulder, the disk shaped throwing bomb on the hip, and even the spare magazines attached the arms are all either molded on or fixed in place. 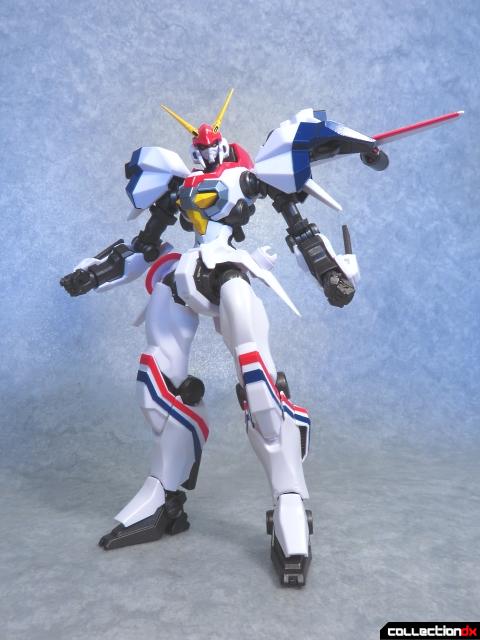 As I mentioned before, this D-1 Custom draws heavily on Masami Obari's style and the designers at Bandai made sure it can pull off all the important poses such as the recognizable "standing like a cool guy" stance. 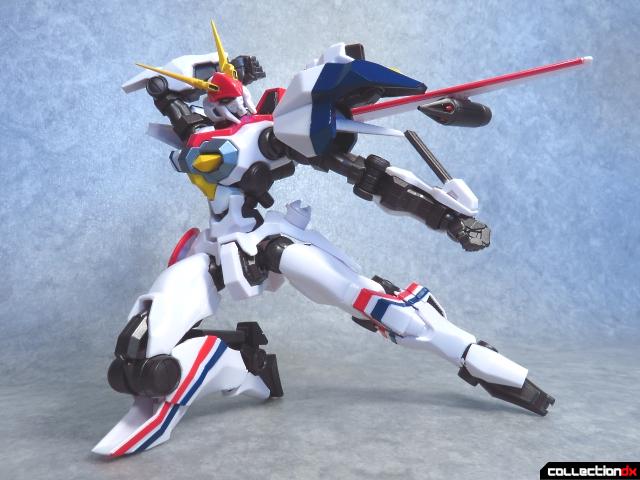 This figure's articulation is just as extreme as Obari's art with a plethora of joints that let the D-1 do just about anything you could want. The joints feel good and stiff and the figure's more slimmed down proportions give everything a wide range of motion. While the skirt armor is one single unmovable piece, it is flared out enough so it does not hinder movement. If the figure had one notable flaw, it's that the ankles have a very limited sideways tilt so you'll often be moving the whole leg to keep its feet on the ground. 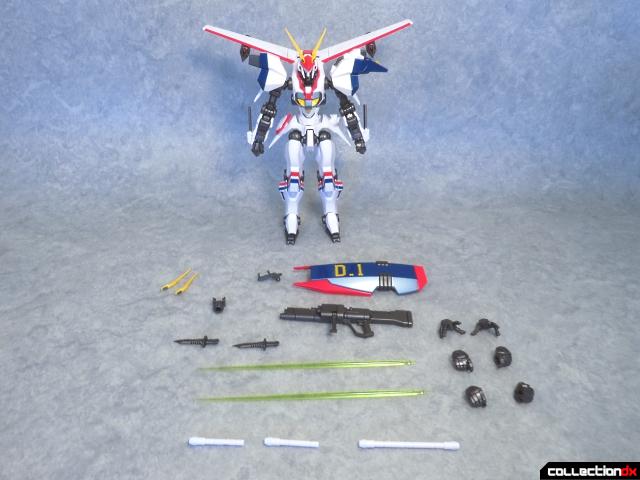 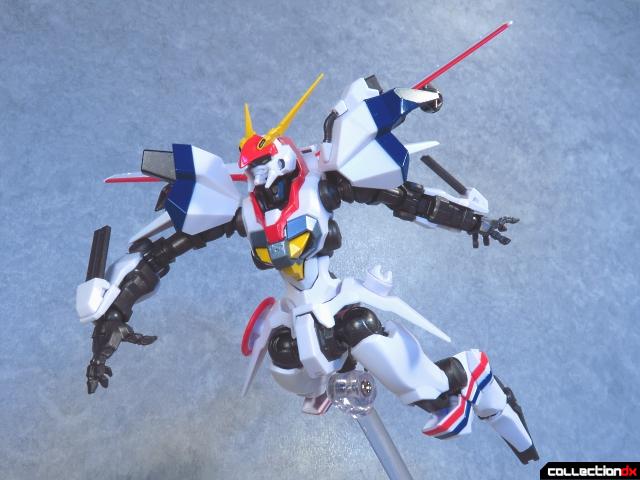 The stand adapter is arguably the most important piece as leaving a winged robot on the ground just doesn't feel right. It clips into the posterior and is compatible with Tamashii Stages or any other stand with a similarly sized peg. Just pop it on the arm and let the Dragonar take flight. Note how the splayed hands on this figure fit in the overall styling of the figure.

Swapping out the different hands involves popping them onto a ball at the end of a small universal joint. This can be tricky as the wrist will often move as you're trying to peg the hand's socket onto the tiny ball. 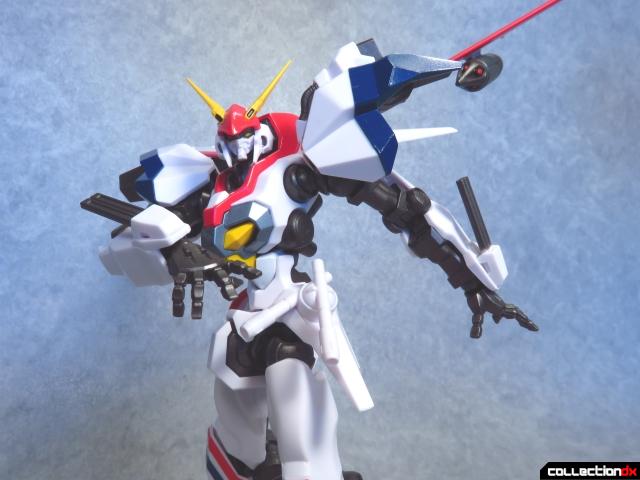 On the D-1 Custom's left hip is a double holster for its laser swords. The swords clip into the mechanism with a a small slot on the handle aligning with a tab inside the holster. Both the inner and outer parts of the sheath can rotate independently to give the blades a samurai style look. 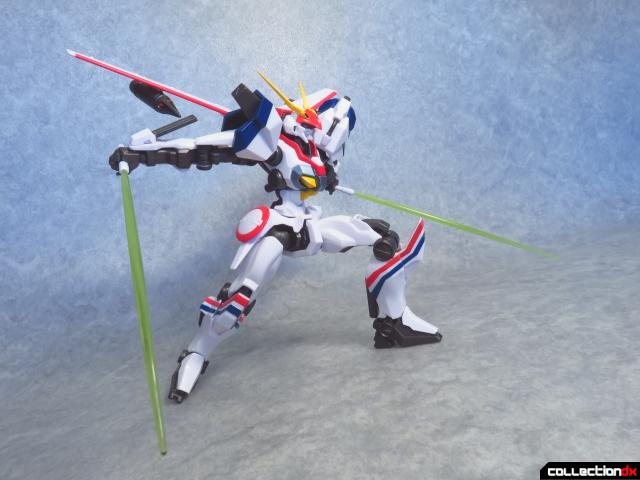 The laser swords can be held by the slightly opened hands (labeled C and D in the instructions) with massive green blades plugging into their hilts. 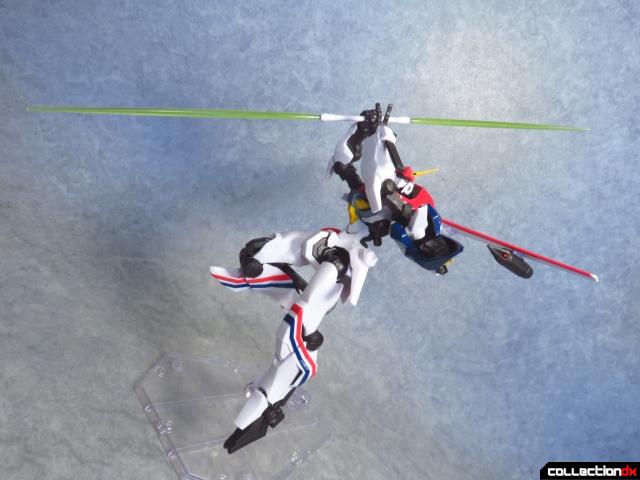 In the show, Dragonar-1 could also lock its swords together to create a twin lancer type weapon. On this toy you get a separate accessory of the combined sword you can plug the laser blades into. Now the figure has an almost Tekkaman Blade like vibe. 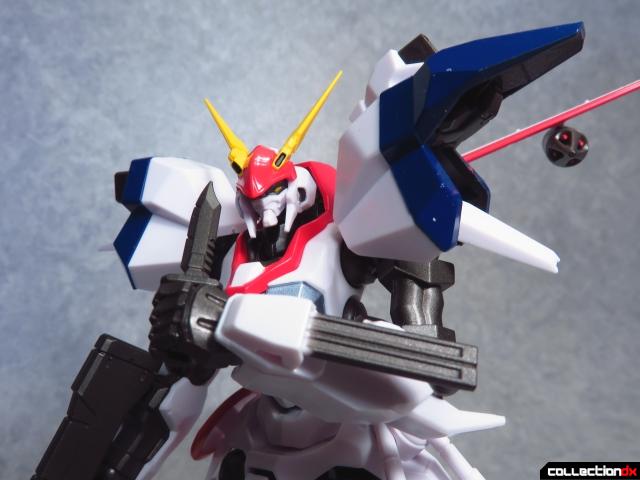 For some less flashy melee combat, the D-1 can employ a pair of assault knives. These use the same hand as the laser blades and look appropriately tacticool. 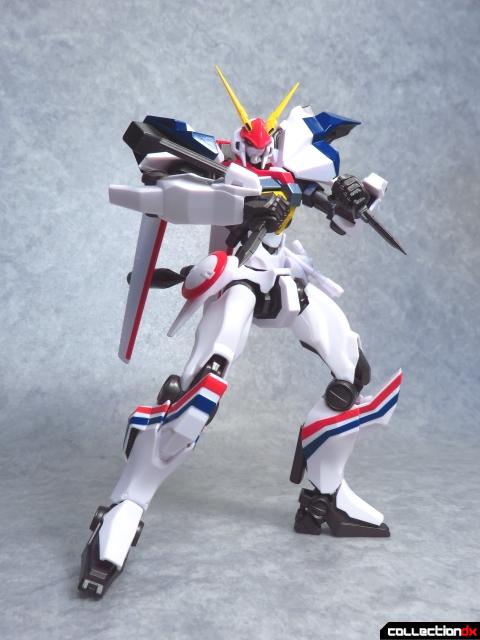 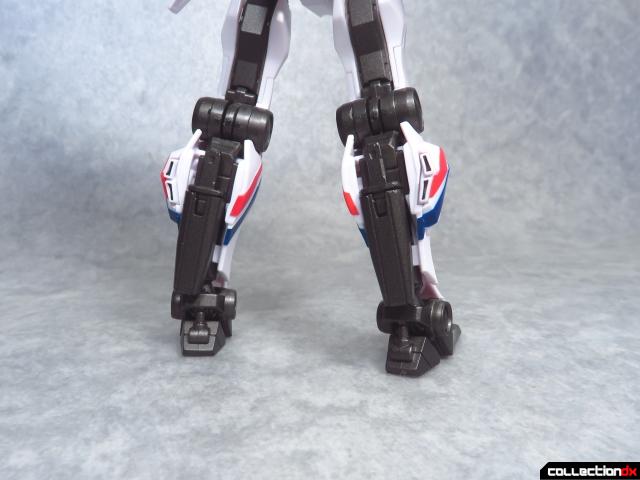 The knives can be stored a pair of sheaths mounted on the robot's calves. While the handles end up in the knee area, this barely affects articulation. Also getting the knives back out can be tricky as they slot in quite snugly. 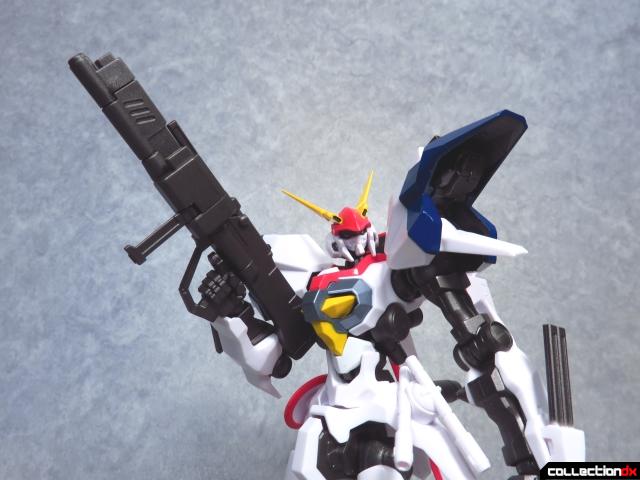 For some long range firepower, D-1 has a Hand Rail Gun. You get a pair of hands with extended trigger fingers to wield this big sci-fi rifle. When putting the hands around the gun's handle you will need to gently bend the fingers out of the way and slip the grip into the palm. 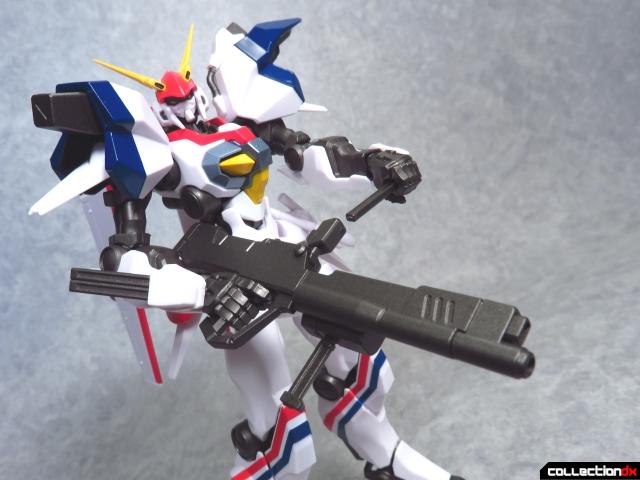 You can swing up the rifle's tiny magazine and remove it. In true future warfare manner, a rail gun's ammo is apparently really small compared to the rest of the weapon. 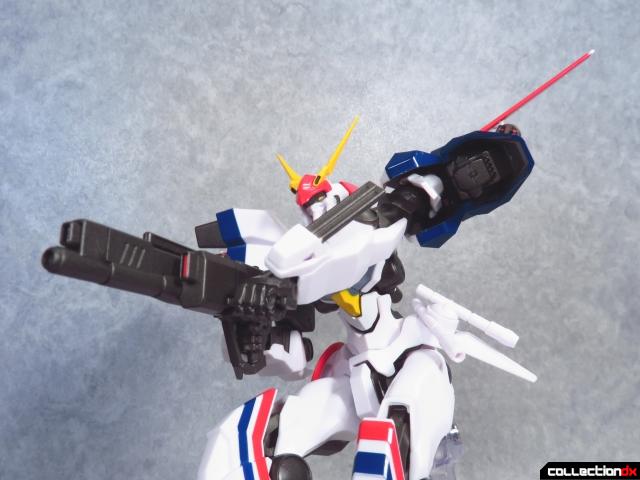 The gun features a moving fore grip that can be grasped by the sword holding hand. Setting this up is a little difficult as you need to put the hands on the gun before plugging them into the wrists. 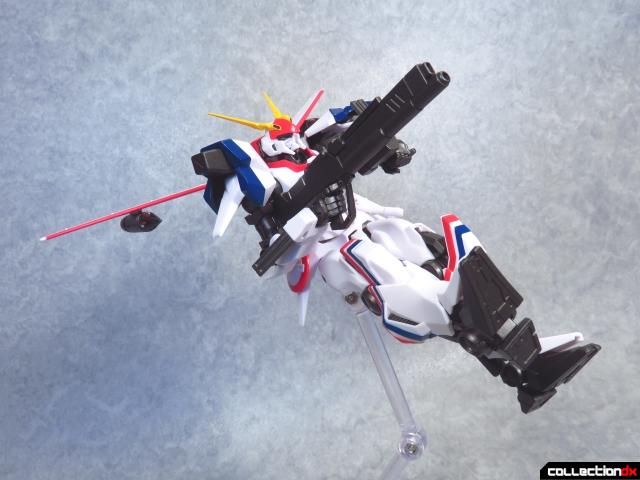 Still when you go through the effort, the resulting display is pretty damn cool. 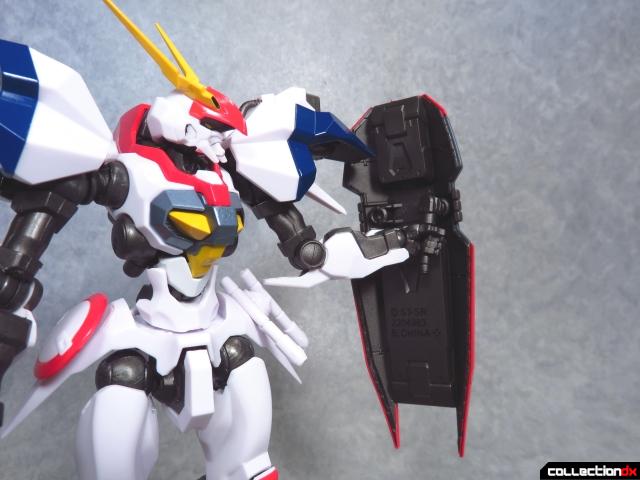 D-1 has two different methods for holding its shield. It can utilize a movable handle on the back side or... 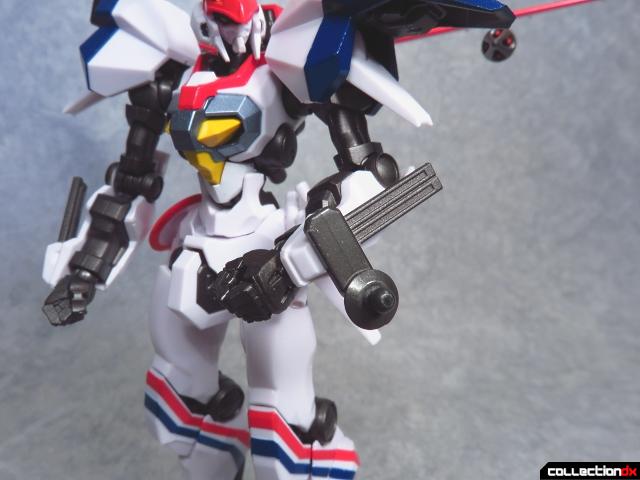 Attach this small bracket to the forearm. Of the two, I find the handle is more flexible but does rely on the strength of the wrist joints to hold the shield in place. 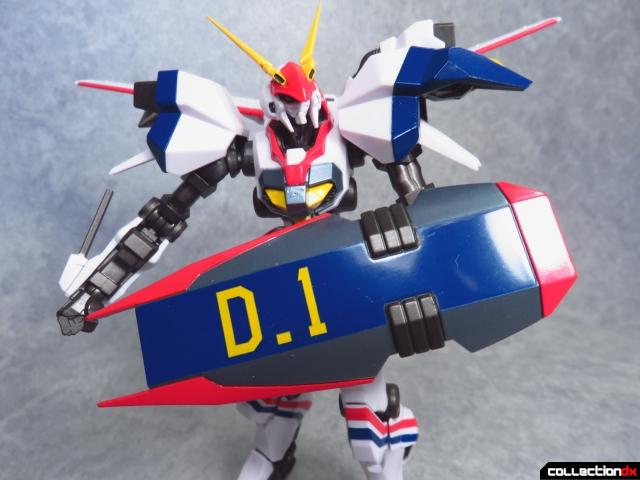 The shield sports some nice vibrant colors with a big "D-1" emblazoned on the front. 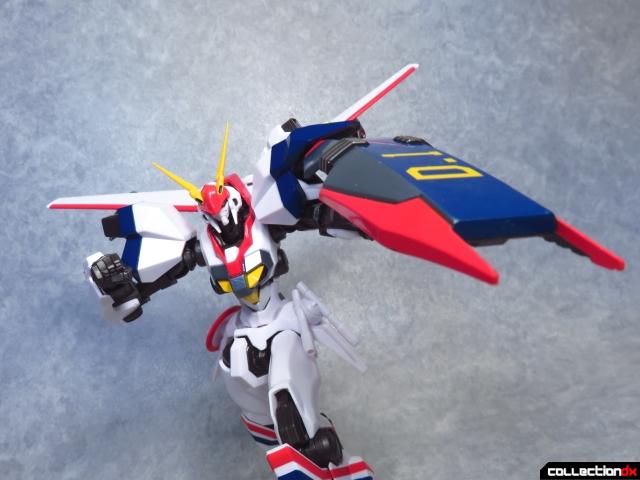 The two prongs on the front give this defensive implement some offensive bite. 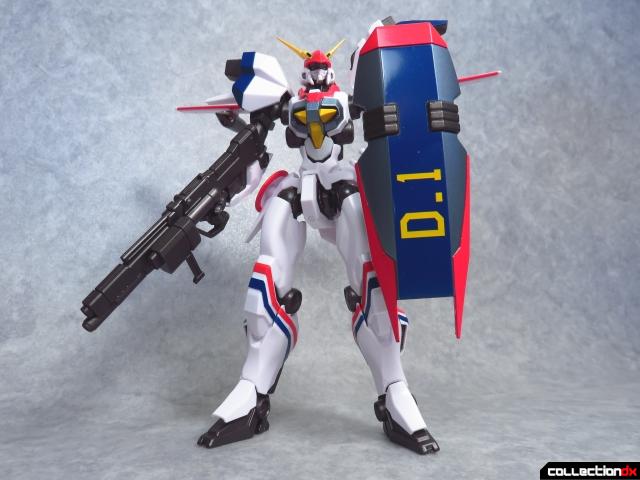 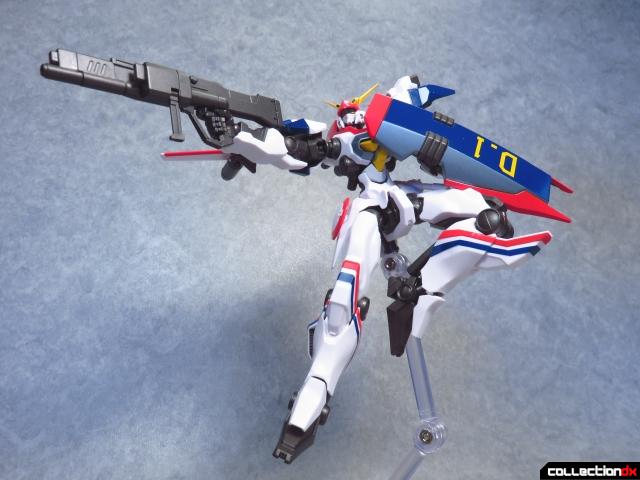 This toy is really everything it needs to be. Even "that pose" is easy to pull off and looks amazing. 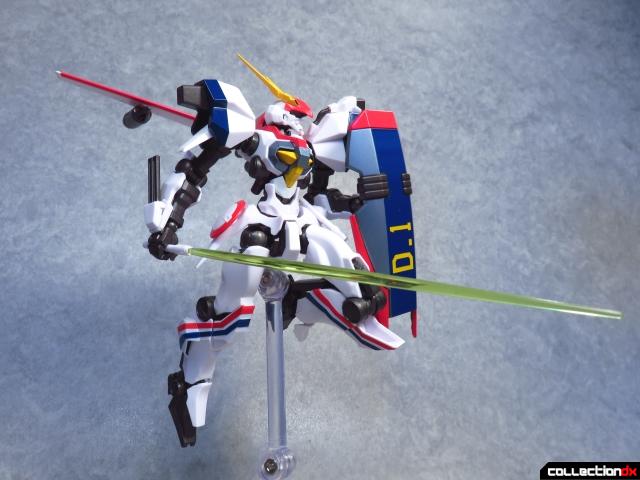 It is really a great rendition of a classic design. 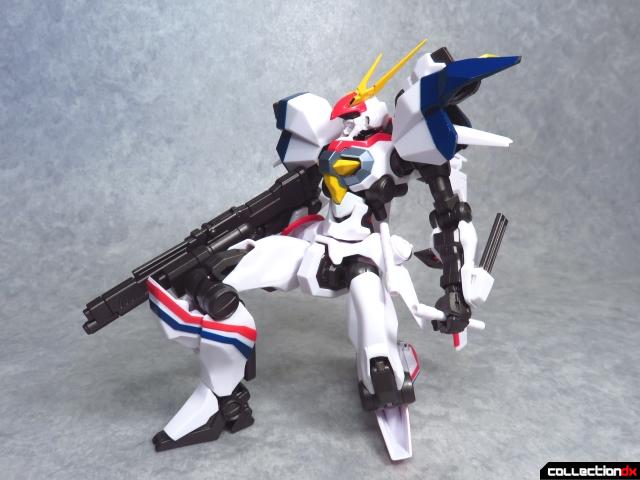 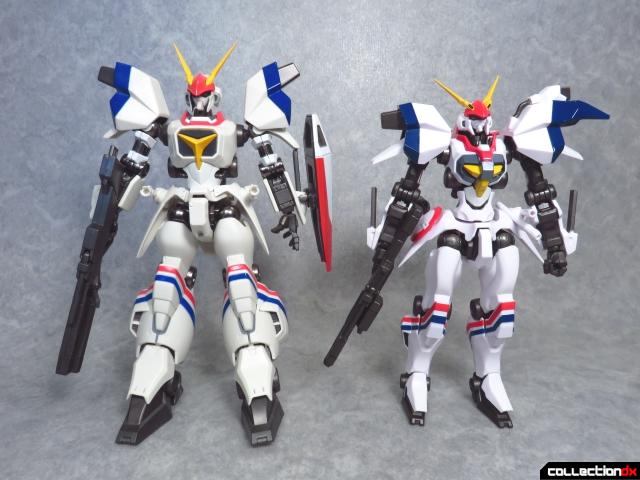 Here is the Soul Spec Dragonar-1 "Opening Silhouette" version next to its upgraded iteration. I reviewed this figure back when it came out and found it to be quite good. These two toys represent different versions of the D-1 as well as two different takes on Masami Obari's style. The former is bulky and imposing which reflects the look of the machine in the opening while latter has the lithe style Obari would come to be known for. While I do appreciate the heft and build quality of the Soul Spec thanks to its diecast inner skeleton, I'm glad Bandai decided to switch to making Robot Damashiis of the Metal Armors as it means we can get new releases more frequently. And honestly, the removable armor gimmick is cool but it added complexity to the figure and felt a bit excessive for something rarely utilized in the anime. 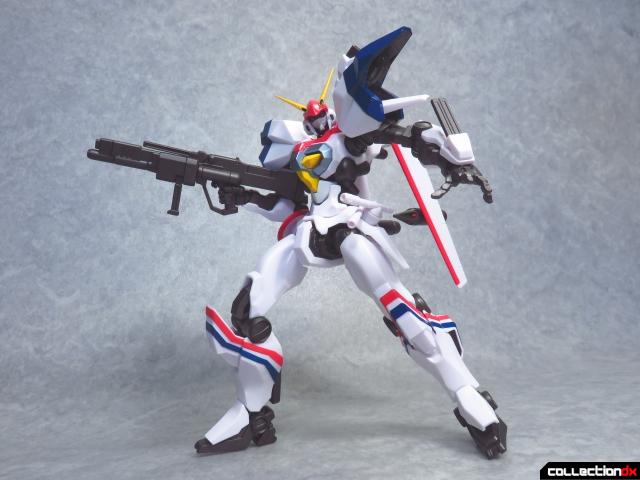 Just BARI all the time.

The Robot Damashii Dragonar-1 Custom is a terrific figure. Really everything it sets out to accomplish it does with amazing prowess and style. It is easily one of the best figures of the line and I had a lot of fun posing it for this review. I highly recommend it for fans of Metal Armor Dragonar or just people who love Masami Obari's distinct style.

I was getting a real Strike Gundam vibe from this design, particularly the knives and the Ootori-like backpack. But Dragonar predates SEED by about fifteen years. Checked the Gundam Wiki and, sure enough, Okawara is credited with "cleanup" on the Strike's design. So, I guess "cleanup" means getting your mecha ready for robot knife fight.