The Girls und Panzer series has been responsible for a battalion of licensed goods ranging from character figures to repackaged tank models with show-accurate decals and even inflatable tank shells. Some of the aforementioned merchandise comes from a company called Pair Dot. Among their catalog of tankery-related wares came this curious oddity of a figure/vehicle combo pack. It is my privilege to introduce the Ooarai Girls High School's Sensha-dou instructor: Ami Chouno. 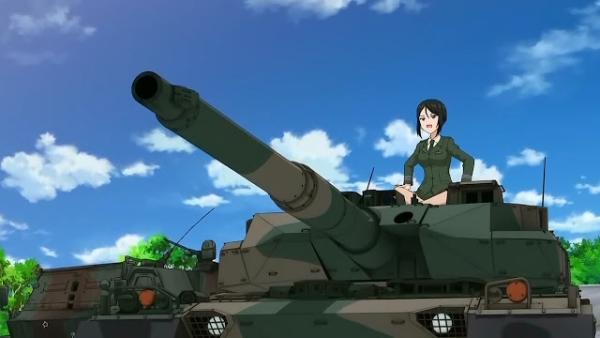 If you remember this GuP character at all, it's probably from her grand entrance into the series. The Ooari school's newly reformed tankery club needed an academic advisor, which led to Ms. Chouno and her Type-10 battle tank being airdropped into the school's parking lot. While driving up to meet the students, she ends up crushing the principal's expensive Ferrari with an ill-timed maneuver. After introducing the Ooari tankery team to the basics of Sensha-dou, Ms. Chouno pretty much vanishes from the show until the very end where she is the judge for the tankery finals. However, the fact that she's featured in the show's intro makes me wonder if there were plans to do more with her.

In any case, when I saw that Pair Dot had made an actual figure of Ami, I had to pick it up just out of sheer novelty. 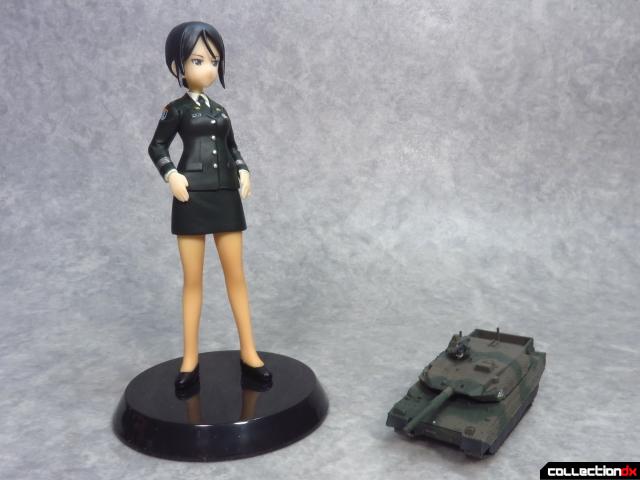 Just like it says on the box, this set contains Ami Chouno and her Type-10 tank. It's a pretty lean package with Ami herself measuring about 3.75 inches tall. 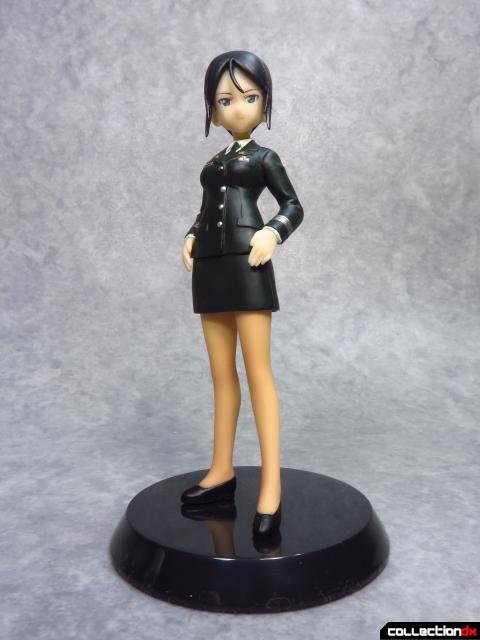 I'll start by focusing on the Girl part of the set. Ms. Chouno is a attractive, if no-frills, non-scale figure. A hole in her right foot lets you attach Ami to the included display stand. 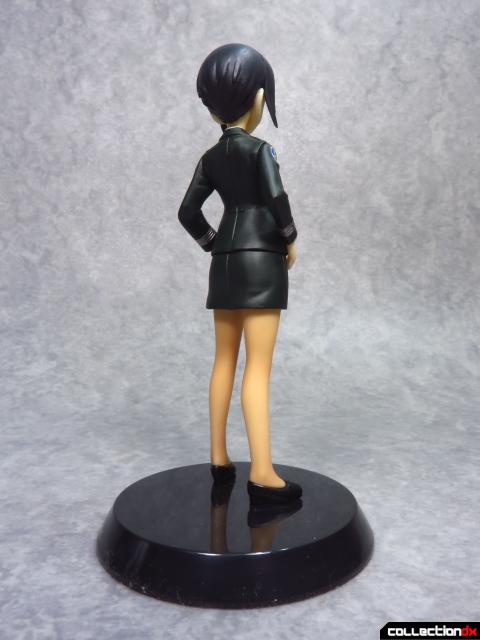 The tankery teacher is clad in her Japan Ground Self-Defense Force uniform, which is quite accurate to the real thing. She even has the standard-issue pantyhose. 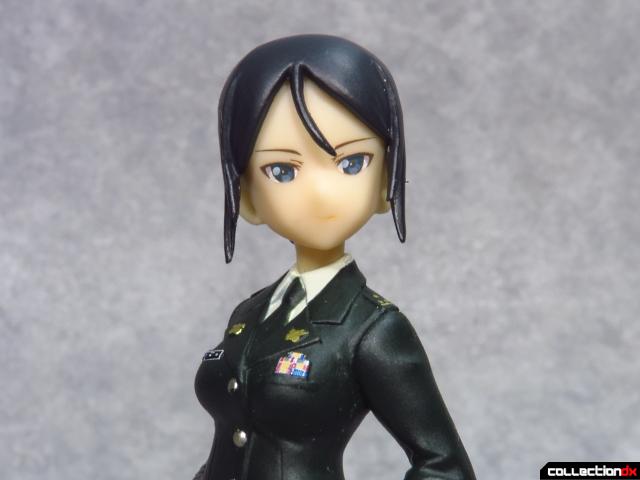 I was pleasantly surprised to find out that Ms. Chouno has a ball-jointed neck. This one point of articulation gives the figure a surprising amount of personality. 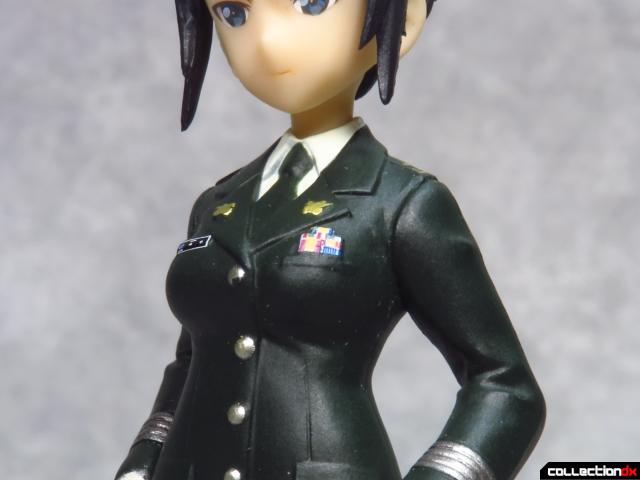 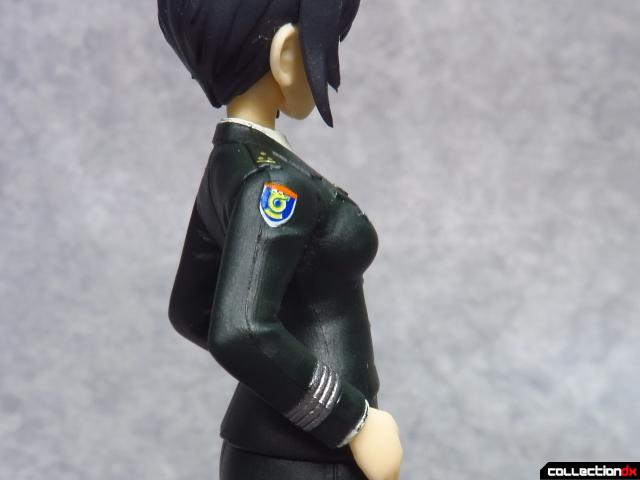 And she has a unit patch on her right shoulder. I'm not sure if this design corresponds to a real tank battalion, but it certainly looks legitimate.

Honestly, though, I've always wondered if there exists an actual military in the Girls Und Panzer universe. In a world where tanks are part of a girls-only sport, is Ami a real JGSDF captain or just a model Sensha-dou participant who was molded into a fine young woman by this prestigious activity? 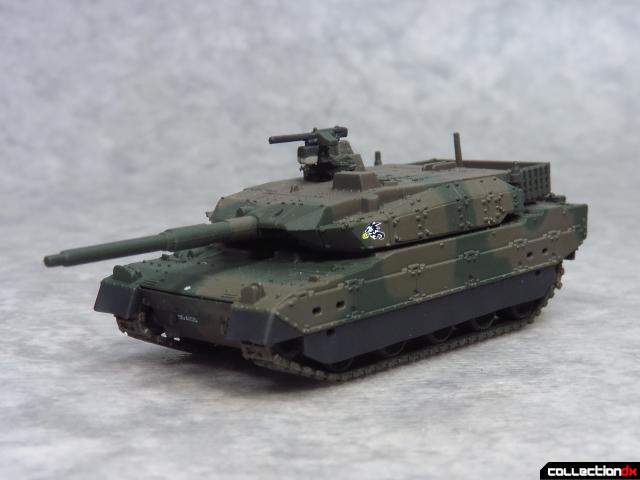 Let's move on to the panzer part of this equation: the Type-10 tank. The JGSDF's premier armored fighting vehicle is rendered here as a tiny 1/144 scale completed model. 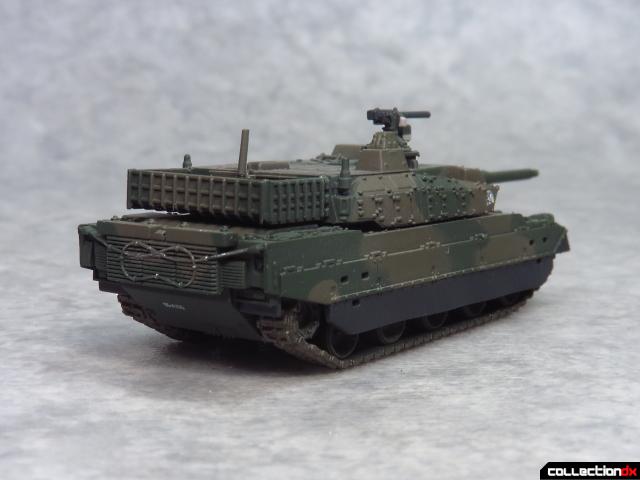 Measuring about two inches long, Pair Dot did an amazing job at detailing and weathering this little panzer. 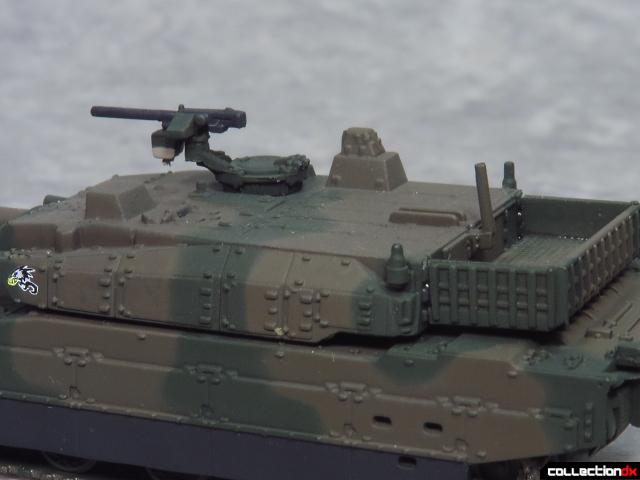 Now, I want to emphasize that this is mostly definitely a model and not a toy, as it features no moving parts, and several bits like the antenna and topside machine gun feel like they could break if handled roughly. 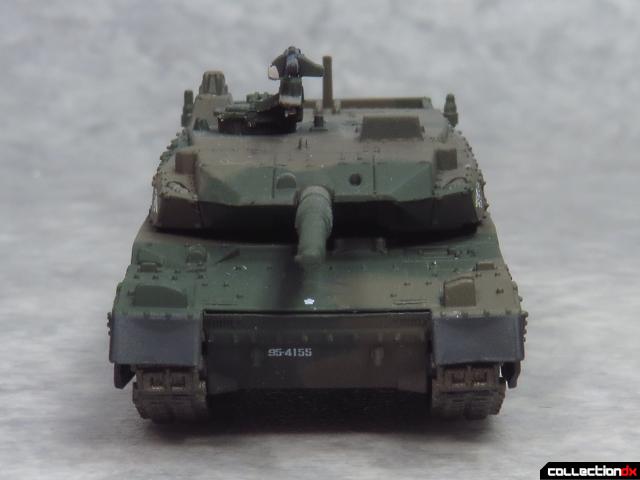 That said, the Type-10 makes for a nifty thing to look at. 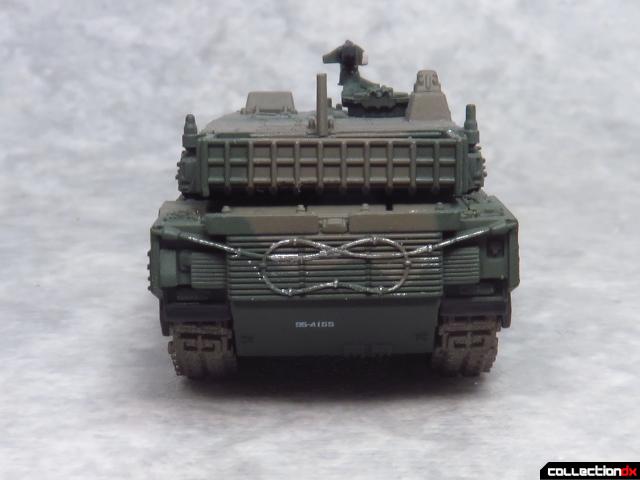 You might need a magnifying glass to pick out all the little details, but I assure you there is a lot packed into this tiny tank. 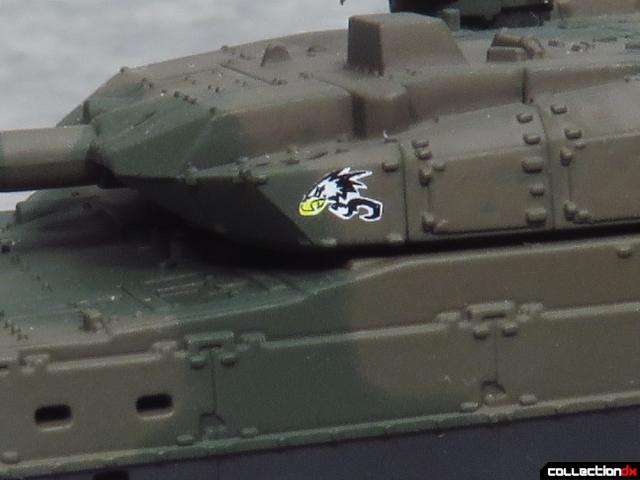 Speaking of things that are hard to see, the sides of the turret are adorned with a stylized eagle head. I actually couldn't tell what this emblem was until I could zoom and enhance it NCIS style, because it is barely the width of a q-tip's head. It's not that the decal is poorly applied or blurry, it's just too small to be legible to the naked eye. 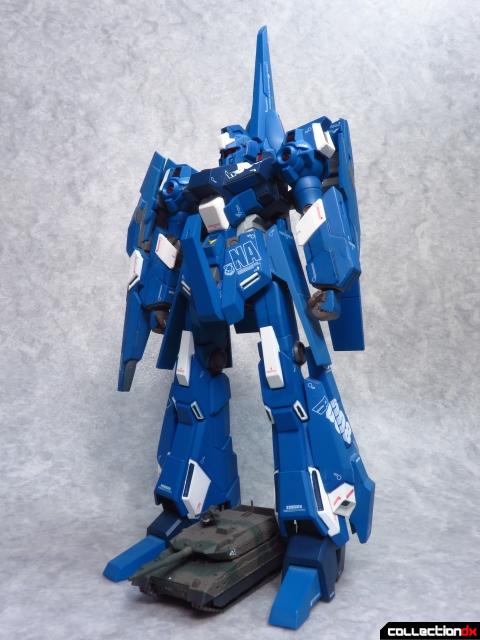 And as a bonus, being a 1/144 scale tank means you can display it alongside combat vehicles from all corners of warfare, both real life and fictional. 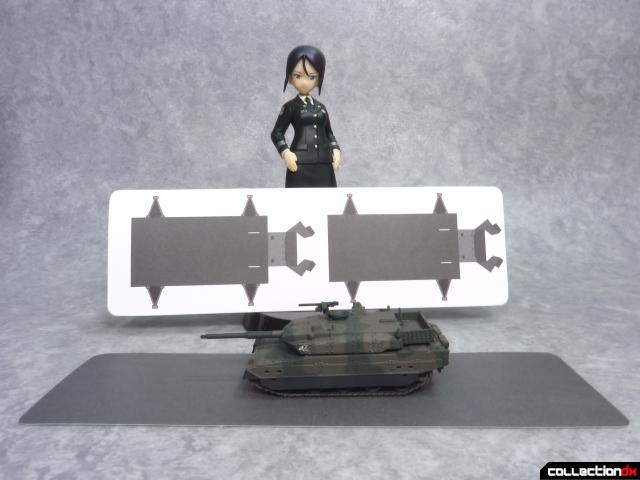 Pair Dot also proudly advertised a set of papercraft airdrop rigs for use with the Type-10. This gimmick is so utterly underwhelming that I can't be bothered to carefully cut the things off their cardboard strips, so here's a link to Pair Dot's official page if you're really curious to see how this works. 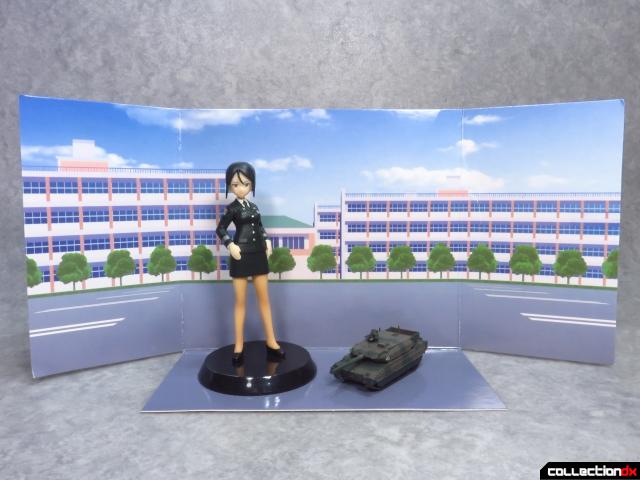 And as one last note, the packaging insert depicts the Ooari High School parking lot where Ms. Chouno made her debut, so you can use it as a low-rent backdrop. 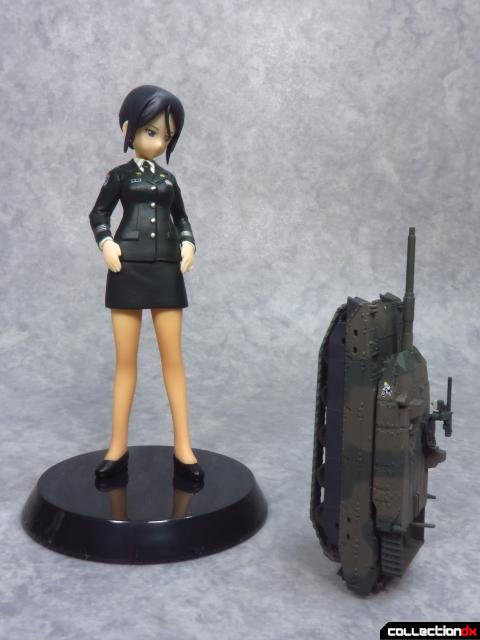 A proper lady is the master of her panzer. 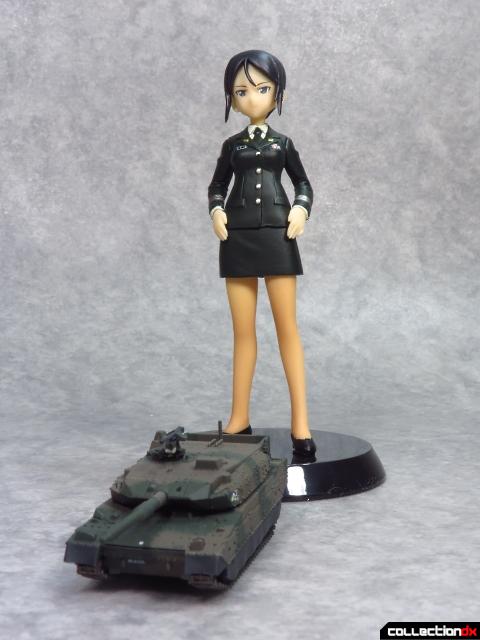 Together, these two make for a fun little Girls und Panzer themed display. 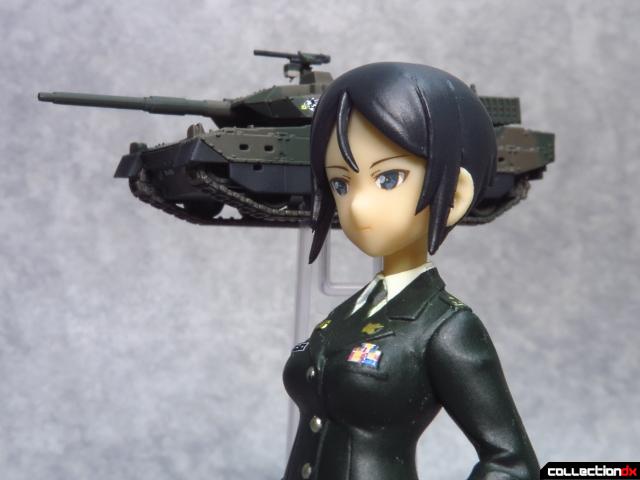 The Captain Ami Chouno & JGSDF Type 10 Tank set is one of the more low key releases in the world of Girls und Panzer merchandise. I believe most casual collectors would balk at the original 2,800 yen price for such a minimalist package, so this is definitely something for fans only. Still, if you find it cheap enough, this girl and her panzer make for a charming novelty in any military lineup.

3 comments posted
Oh cool. Thanks for the info!

Oh cool. Thanks for the info! That's a neat reference.

You remember all the speculation we did about what kind of pivotal role she was gonna play in the anime?