Armin Arlert, one of the main characters from the incomprehensibly popular Attack on Titan, is the learned and brilliant young strategist of the group. While his physical strength pales in comparison to practically anyone else in the Recon Corps, his genius more than makes up for it. For reasons unknown his figma is the only one from Attack on Titan that's Good Smile Webshop Exclusive. 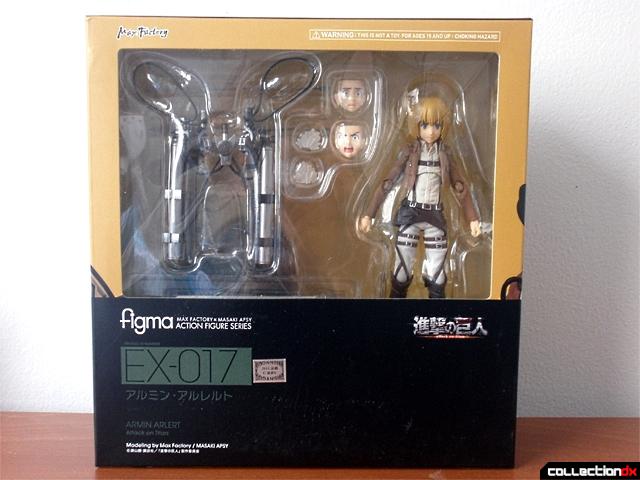 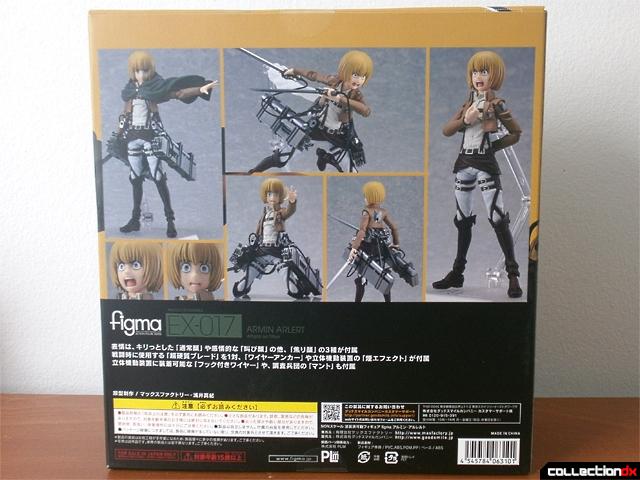 He comes in a standard box with a front window into the contents. 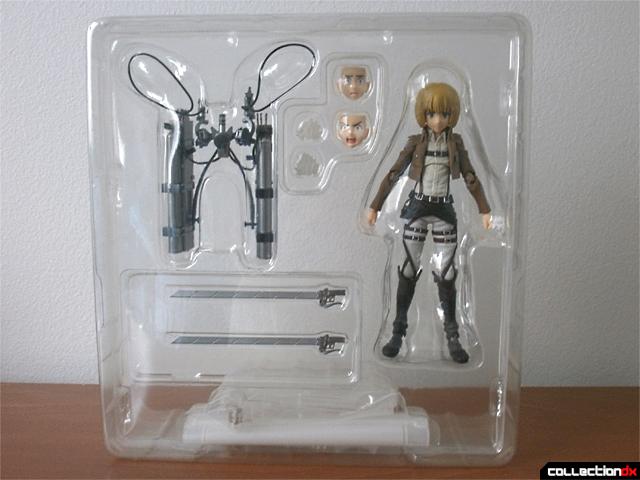 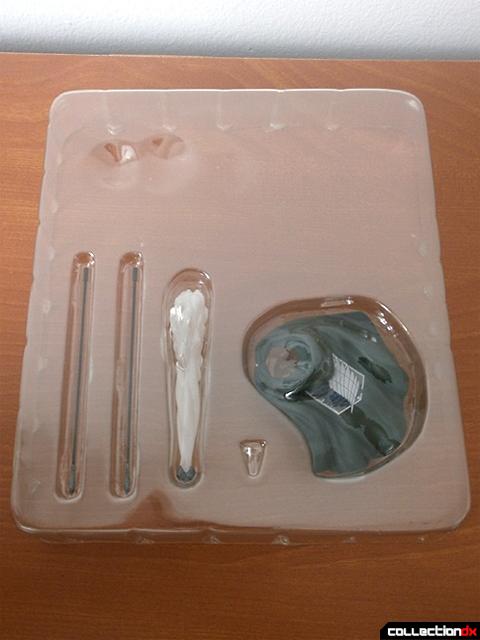 The figure comes in the usual clear plastic trays, showing off the enormous 3D Maneuver Gear. 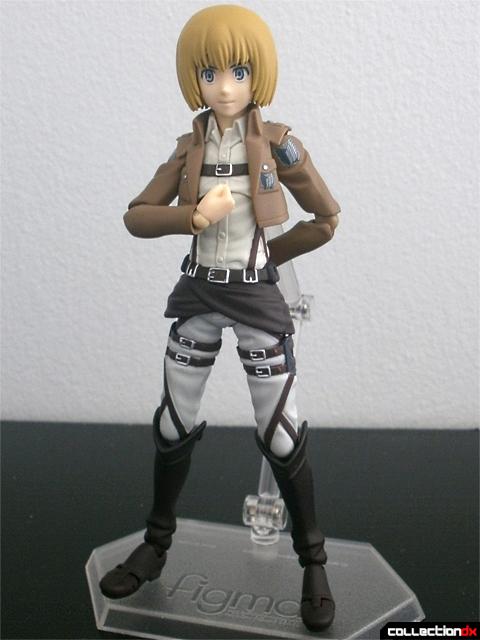 Straight out of the box, we can see how well Armin does his salute. His right arm can't quite extend to the proper position, but it's forgivable. 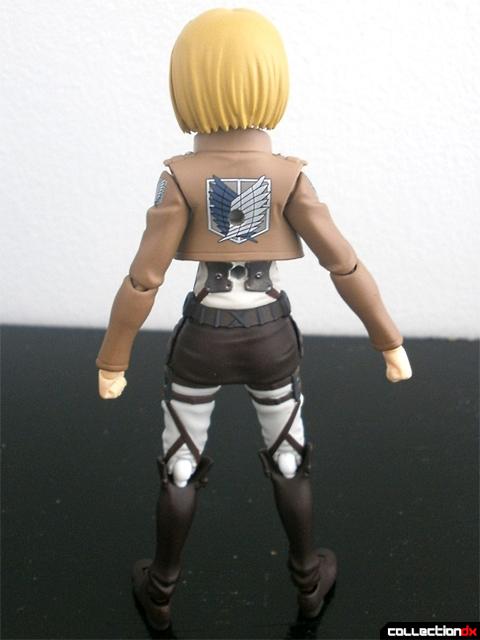 Armin's back has two holes for the Figma stand, one rather obnoxiously in the center of the Wings of Freedom on his jacket, and the other one just below. Two holes seems unnecessary but it makes posing him with the stand and all his accessories much easier. 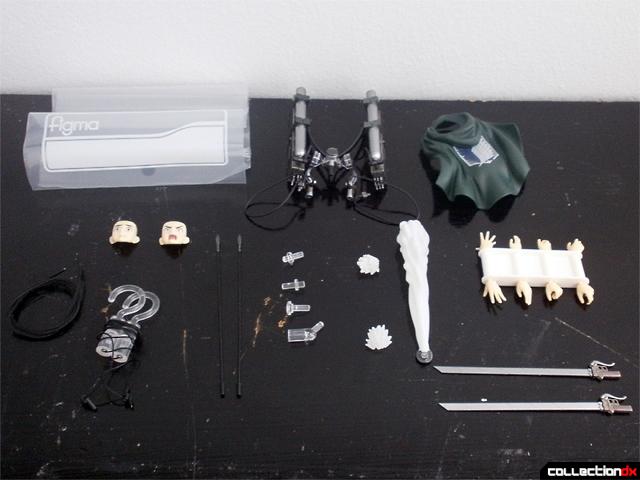 Besides the base figure and stand, Armin comes with plenty of extras. He has four pairs of hands: splayed, sword-holding, cupped hands, and ones that can hold more standard weapons. Also included are a cloak, two swords, and two alternate faces. The 3D Maneuver Gear gets effect parts, parts for the anchors it shoots, attachable wires that it can use to hook onto objects or figma stands, and extra wires. There's also a spare wrist joint and an extension for the stand, and a clip to hold the cloak in place. 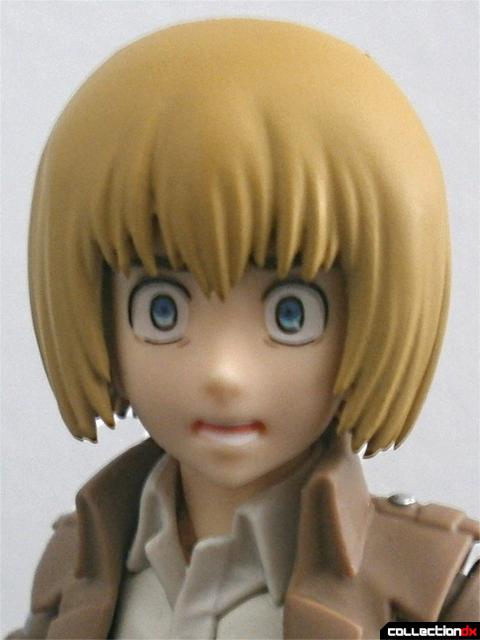 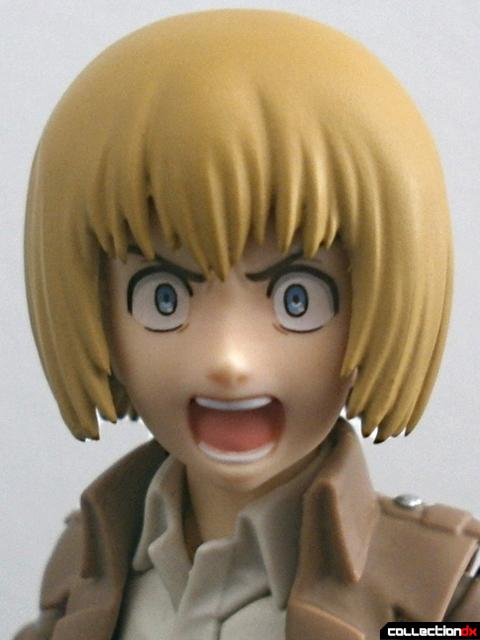 Really the star pieces of this set are the extra faces. Armin's shocked expression is extremely expressive, and his yelling face works perfectly for those angry action poses. 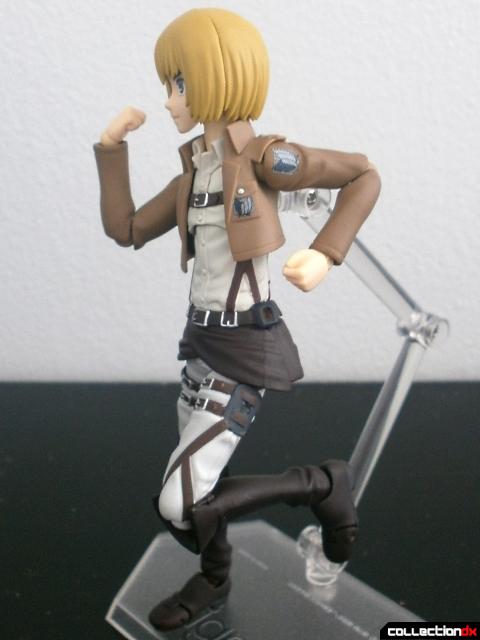 While he's certainly not the most poseable figure of all time, Armin's range of motion is still up to Figma standard. His skirt is made of a flexible plastic that doesn't get in the way of his legs moving, but his legs pop out a lot more than they should, but I'm not sure if that's a universal problem with this figure or just mine. 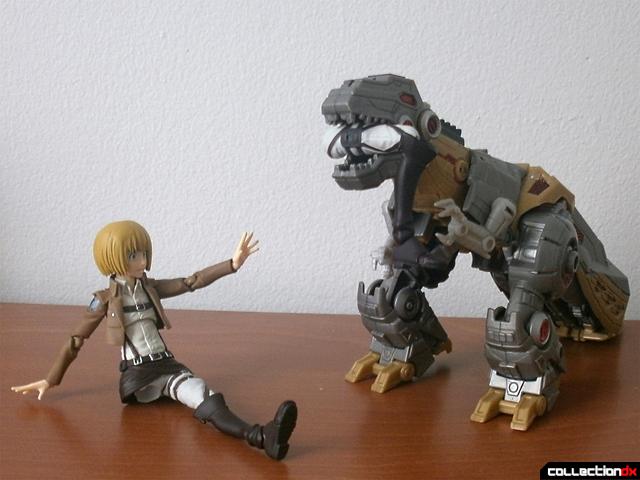 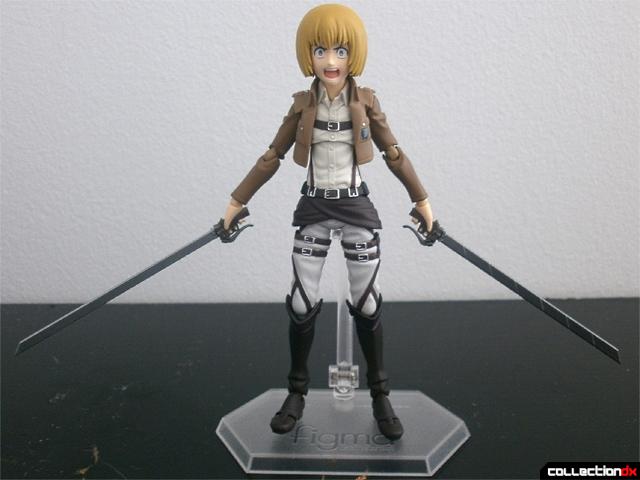 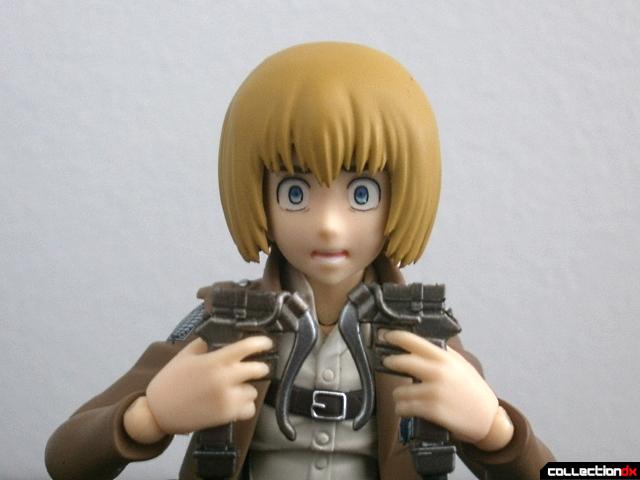 First up on the large accessories, the swords. They're definitely as detailed as they need to be, and the blades even come off! 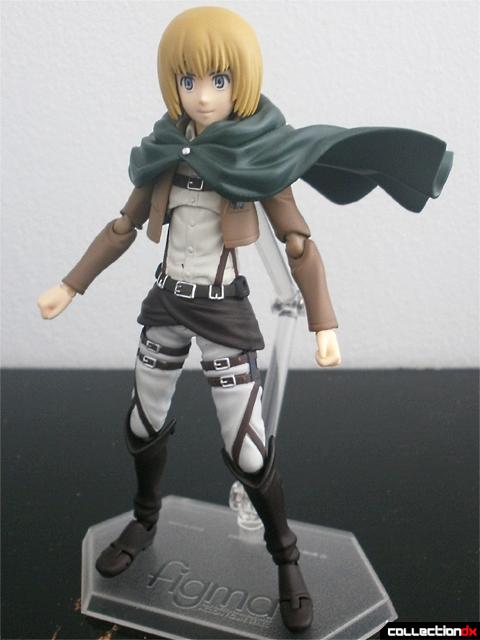 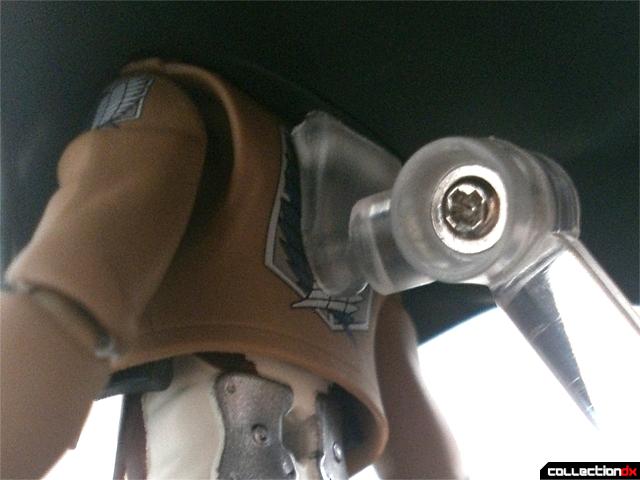 The cloak is one solid unmoving piece, that definitely accentuates dynamic midair poses, but doesn't work so well otherwise. I kinda wish they had included another less windblown cloak or a cloth one, but that's more RAH territory. There's a clear tab on the bottom that allows the display stand to hook through it and into the upper hole on his back. 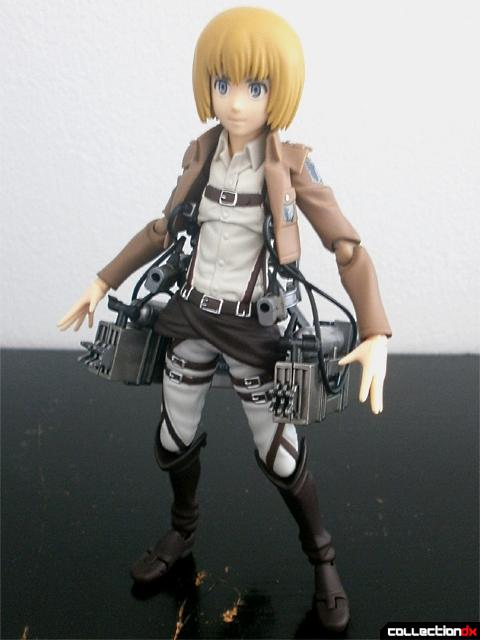 Of course, the most important item, the 3D Maneuver Gear. Putting it onto Armin is not nearly as stressful as I thought it would be, it plugs into the lower hole on his back, two more on his sides, and two on his mid-thigh. The 3DMG's attention to detail is incredible, it looks great, and does everything it needs to and more. 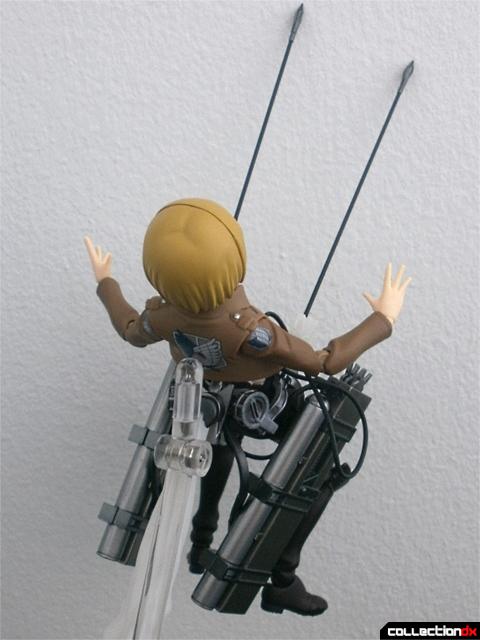 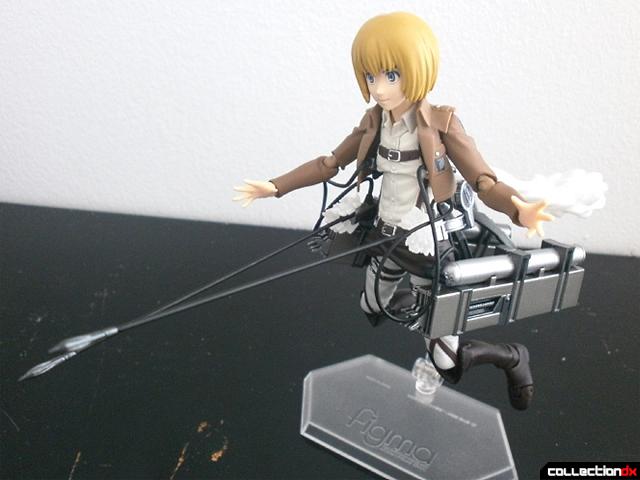 The anchors attach right into the 3DMG, and extend straight forward. An effect part goes right over each anchor, and another one on the center back. I'm personally not big on effect parts usually, but it's still a nice touch. 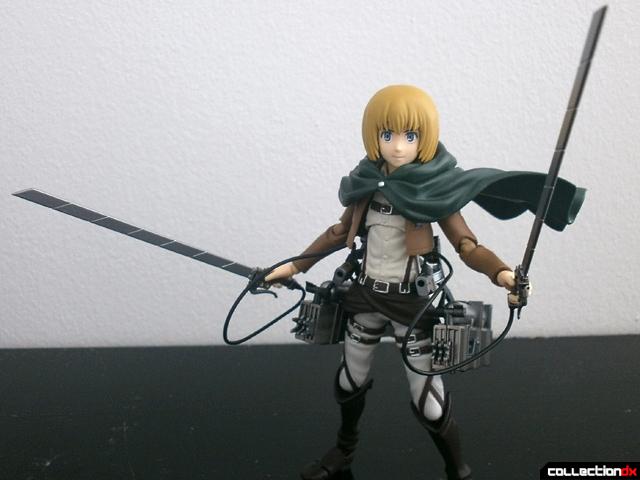 Here's Armin with cloak, swords, and 3DMG all together. Looking at him battle-ready like this, you can almost forget that Titan-killing is not his specialty. Incredibly, he can actually stay balanced without his stand even with all his equipment. 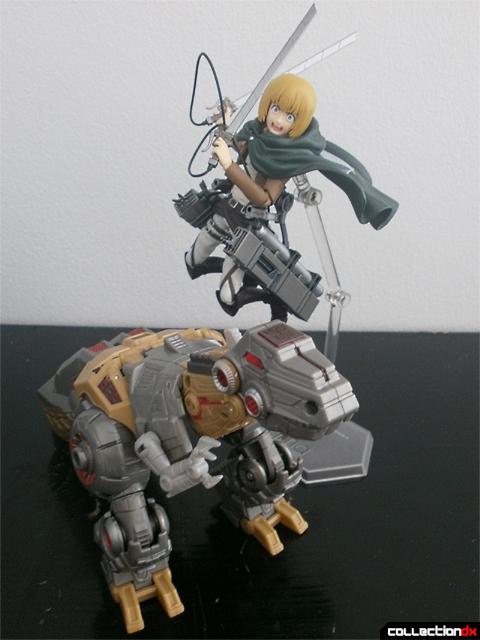 With the aid of the figma stand and extension part, he can be propelled extra high to get a boost on any target. 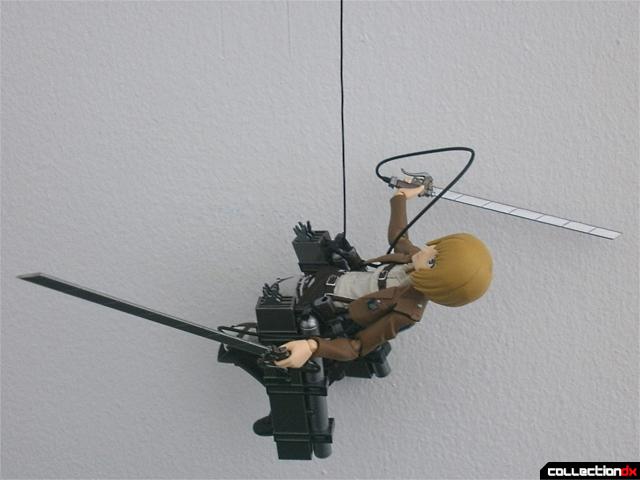 The alternate hook attaches into the same hole as the anchor part, and lets Armin hang from almost anything. It's a lot more stable than I would have thought, and lets your neighborhood friendly Titan-Man swing across a display. 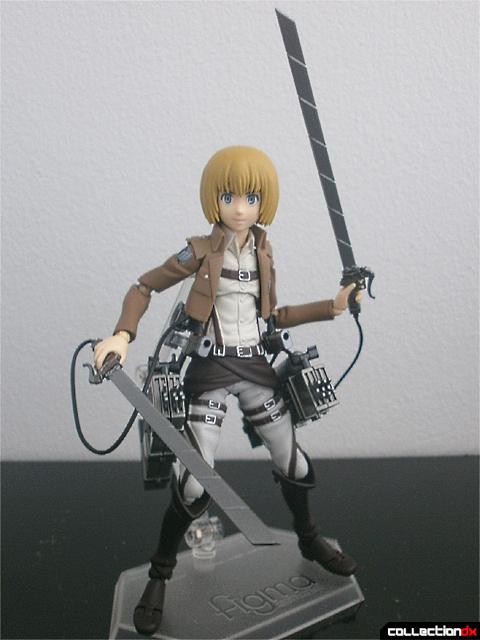 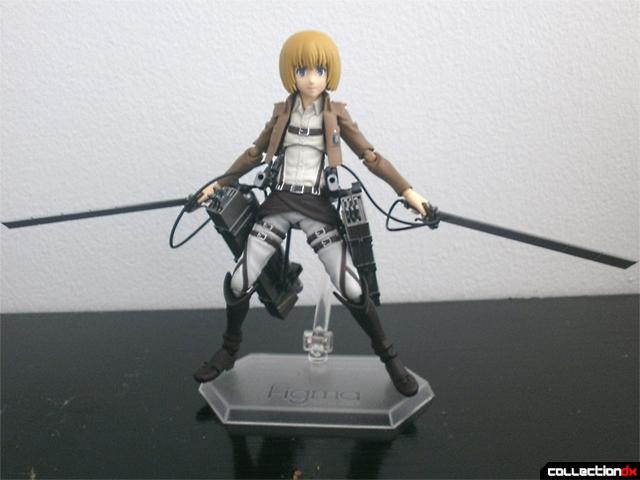 He might be an exclusive and thus harder to get ahold of, but Figma Armin is a worthwhile buy, especially if you want to complete the set for a full Titan-fighting taskforce. I'd recommend him to fans of the show who've already bought Figma Eren and/or Mikasa, but if you just want something of Armin I'd recommend the Nendoroid out in a few months that won't be web-exclusive. To wrap up, let's have an obligatory Zeta Gundam joke. 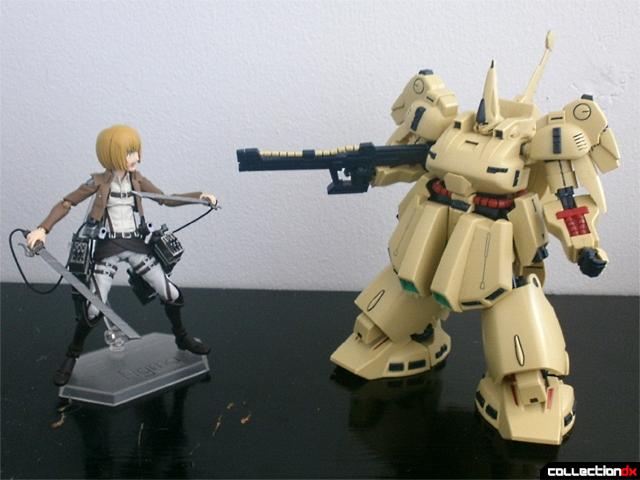 All you've gotta do is assemble the whole crew, and then get the Colossal Titan costume and dress up in it for some interesting pictures.