The Invincible Iron Man is basically American tokusatsu, so it is fitting that Marvel’s movie-verse Iron Man is the latest addition to Bandai’s SH Figuarts line.  The Figuarts line is designed to bring live action characters to life with incredible detail and unparalleled articulation.  When the Iron Man releases were first announced, I realized that Bandai’s effort could very well be the best small-scale action figure the Golden Avenger and his friends have ever received.

The Variable Threat Response Battle Suit, aka War Machine needs little introduction these days.  The Iron Man movie franchise has taken a B-tier 90s supporting character and turned him into an internationally recognized icon as Iron Man’s gunmetal and heavily armed comrade-in-arms.  Much of the credit for that rise to stardom belongs with the suit design.  The Marvel movie-verse VTRBS is a chunky and durable looking piece of tech with real world weapons and a believably cumbersome look that Bandai has given its due. 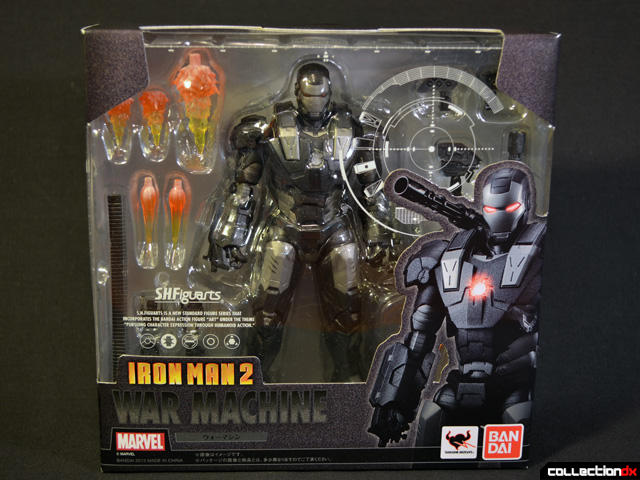 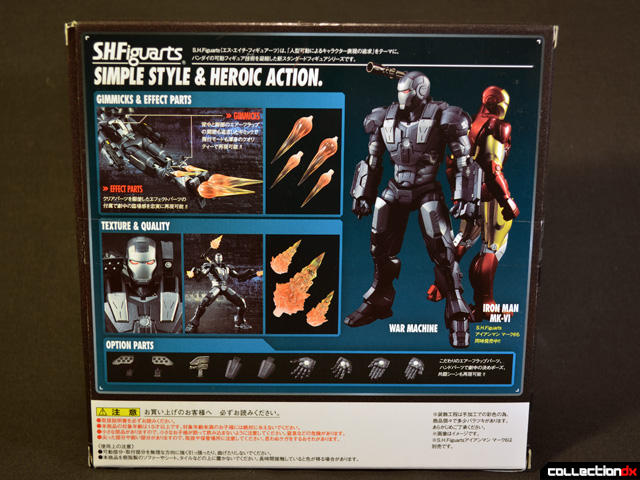 War Machine comes packaged in the same style of box as Iron Man Mk VI with a diecut window, sharp graphics, and enhanced photos of the toy.  I love how the graphics on the window mimic the style of Stark and Rhodey’s in-helmet HUD in the films. 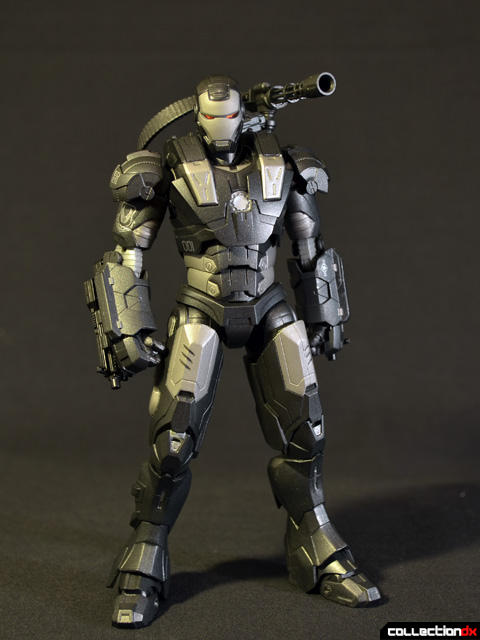 War Machine stands six inches tall, but the minigun can be elevated a bit past that height.  The figure is made from the same mix of hard and soft plastics as Figuarts Iron Man, with diecast metal feet for balance. 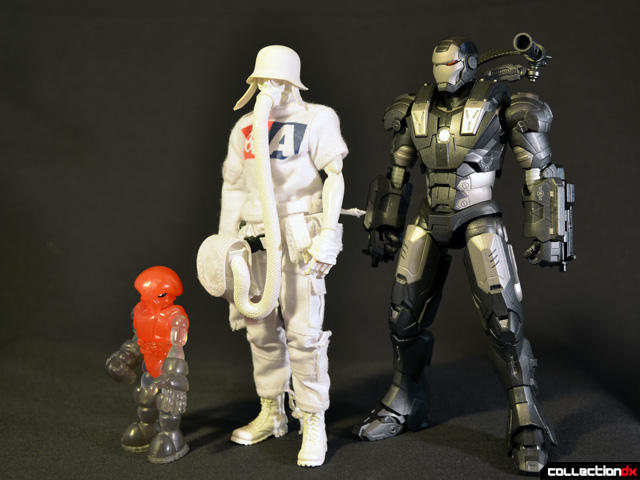 War Machine scales nicely next to other six inch scale figures, as seen here.  The sculpt of WM is bulkier than that of Iron Man, giving a little more believability to the idea that there’s a man inside the suit.  Wraith Pheyden shown for scale. 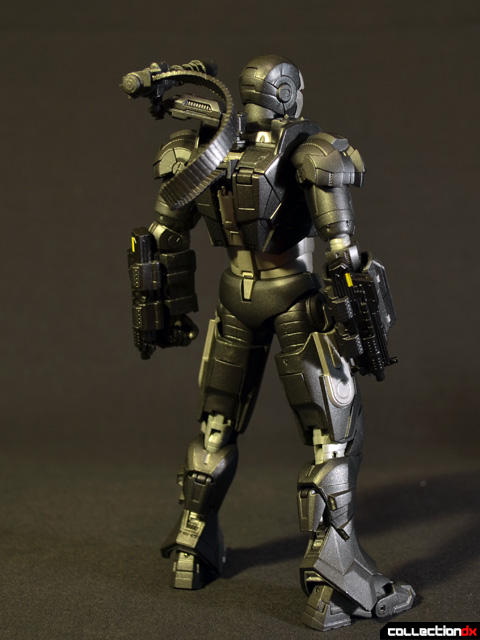 From the back, the glorious mecha-ey details of the weapons and armor become more apparent.  Out of the package the minigun and ammunition belt must be attached.  The minigun mounts securely to a port centered between the shoulders.  The mount for the minigun is supposed to slide from side to side to provide more aiming clearance, but Bandai instead opted to mount it in the center and make the posable mounting arm a bit longer.  While not accurate, Bandai’s solution does make for a durable solution that can be aimed over either shoulder.  The ammo belt is longer than on most depictions of WM so it can reach either shoulder, and is made from super soft PVC so it stays firmly attached and will never hinder motion. 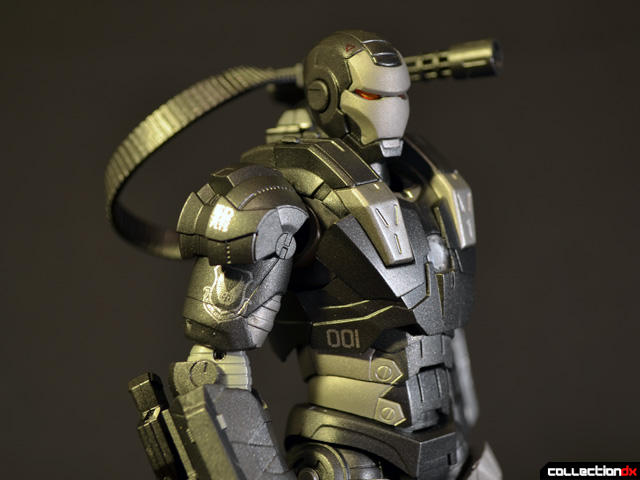 I griped a bit about the mask sculpt on Bandai’s Iron Man being very sharp and gaunt looking, but War Machine almost has the opposite problem.  The faceplate is a little too wide and a little too flat, almost like his nose got smushed in.  It’s not a terrible sculpt, but it does not look quite accurate.  What IS accurate is that sharply printed Edwards Air Force Base logo on the bicep, making Bandai’s War Machine more accurate than every other release of the character besides Kaiyodo’s Revoltech.  I am not sure if it was a licensing issue, but not even the Hot Toys figure has that decal. 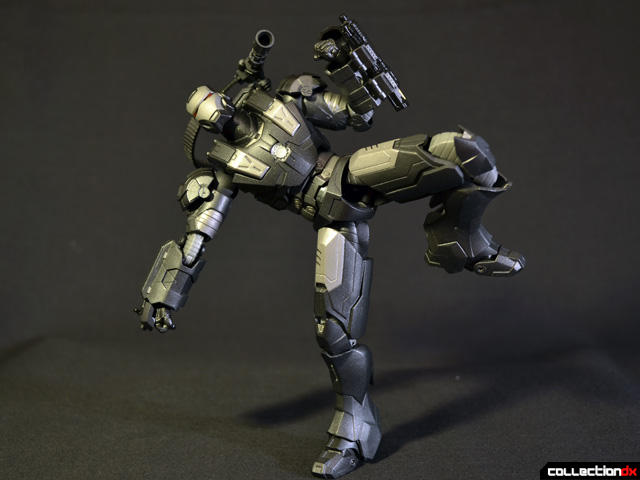 Figuarts figures are meant for posing, and War Machine delivers.  Normally when discussing figures of bulky characters like War Machine, caveats have to be added about how the figures are ‘posable enough’ given the limitations of the design.  Bandai did not settle for good enough, and there is nothing their War Machine should be able to do but can’t. 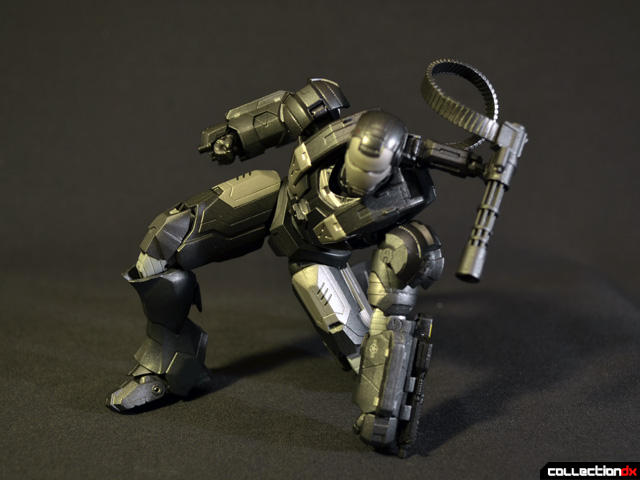 War Machine can even do the Iron Man Poster Pose, something the armor was never meant for. 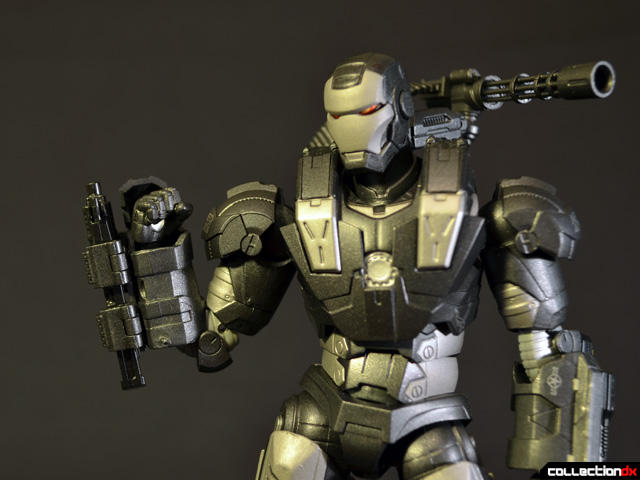 I went into nauseating detail on the clever tricks Bandai came up with to achieve maximum posability without sacrificing looks in my Iron Man Mk VI review, but I’ll go back through some of them here as well.  War Machine features the same lovely double jointed elbows with a separately posable elbow guard to keep the elbow bend from looking unnatural.  The abdomen is again made from multiple sliding armor segments for smooth motion and clean lines. 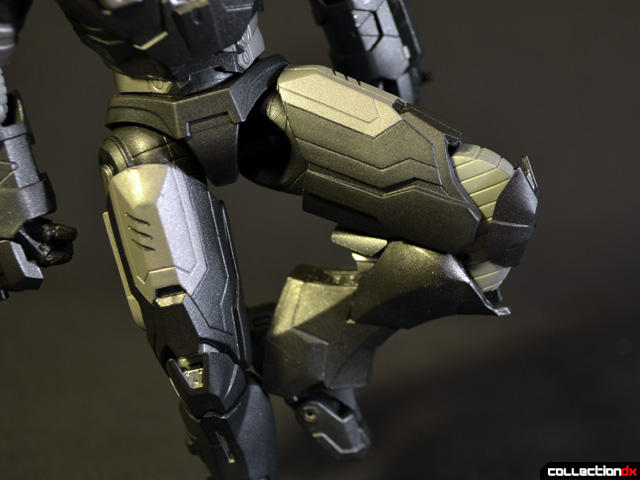 The knees are full of glorious mecha detail, and the hips feature the standard Figuarts extending joint feature for extra motion.  The thigh armor and skirt are both made from hard plastic, but do not interfere with each other. 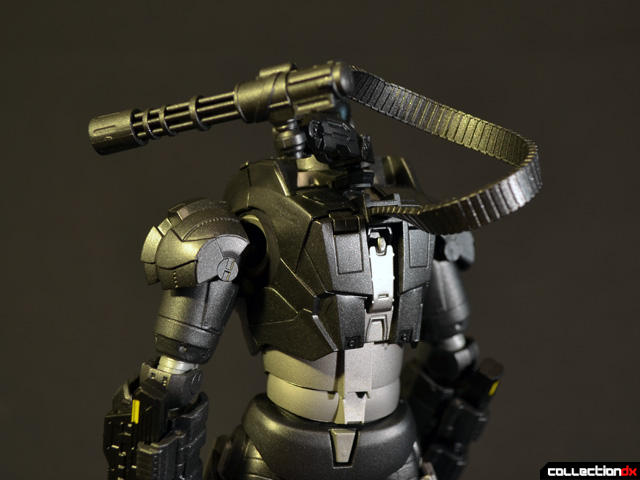 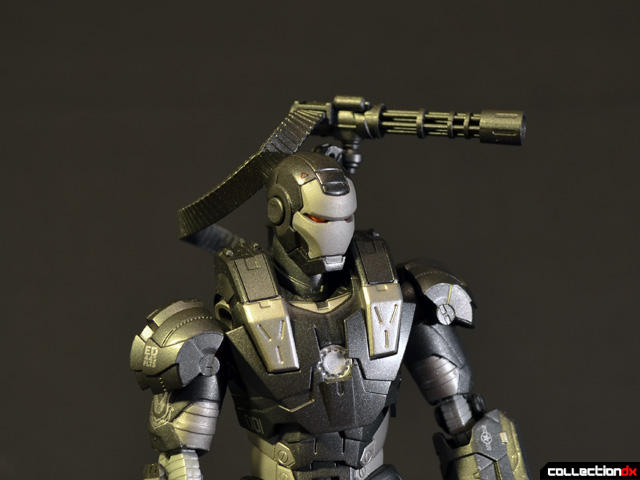 The minigun on the back attaches to the previously discussed fixed mounting point.  The gun arm is hinged at both ends, with an additional swivel under the minigun, allowing the gun to rotate and elevate all about, but the angle the gun is pointing at cannot be changed.  The Hot Toys figure had the same problem, meaning that the gun cannot be aimed pointing forwards in flying poses.  The lack of aiming posability seems like a lazy omission to me that could have been solved by making the joint where the gun attaches to the arm a ball joint. 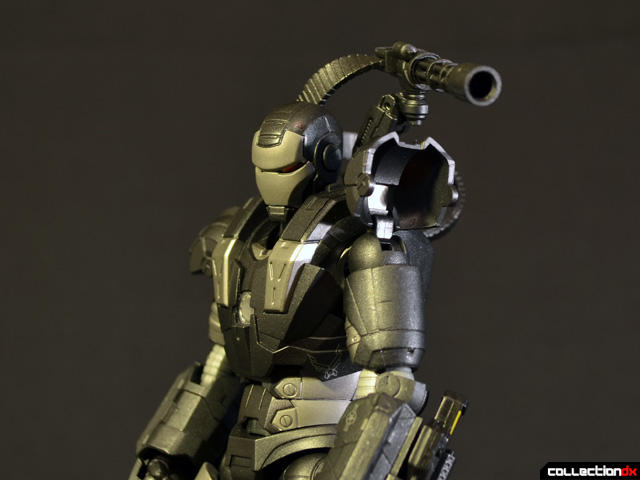 The shoulder pads are excellent.  The same elegant solution as used on the Figuarts Iron Man works here even for War Machine’s much bulkier pads. 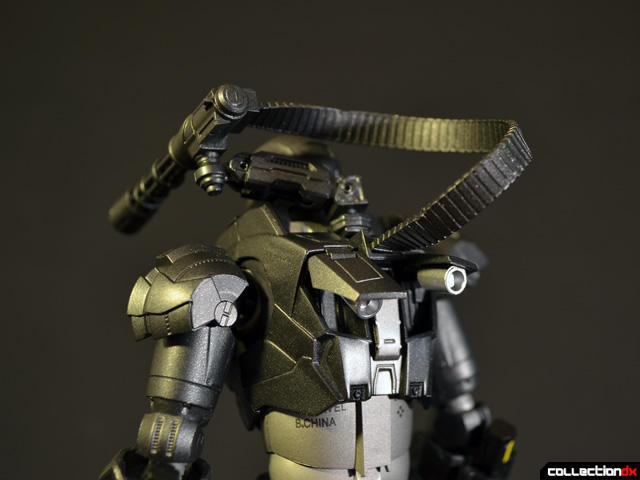 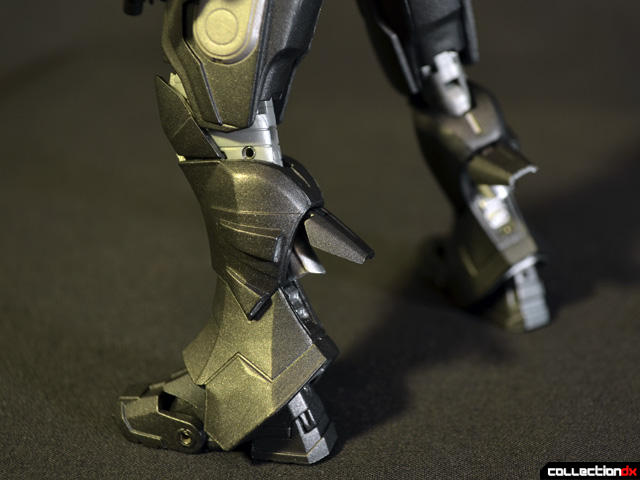 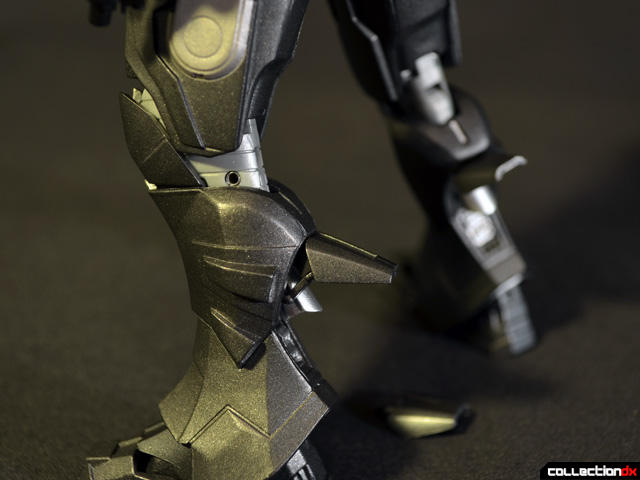 Whereas all of Figuarts Iron Man’s flaps and hatches were swappable parts, War Machine features some working flaps.  The deployable boosters on the back and back of the calves feature hinged flaps.  For the detail conscious, a swappable set of open calf flaps are also included that have little support arms.  Worth noting here is that Bandai’s War Machine’s legs are still not totally accurate to the film.  In Iron Man 2, when WM prepares for flight the panels on the sides of the calves slide down to provide extra thrust vectoring, a feature not depicted on any War Machine toy to date. 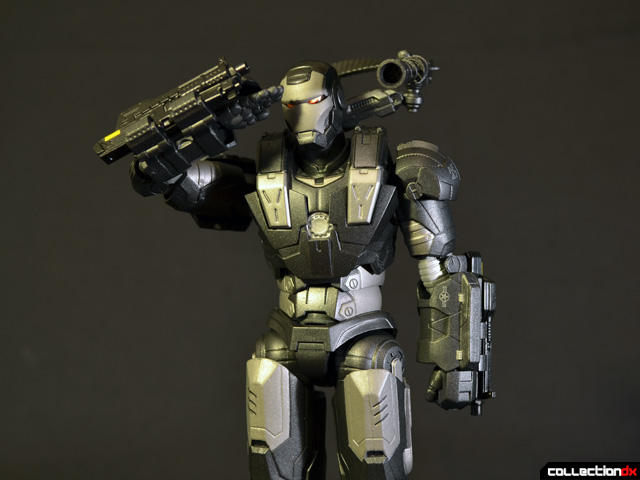 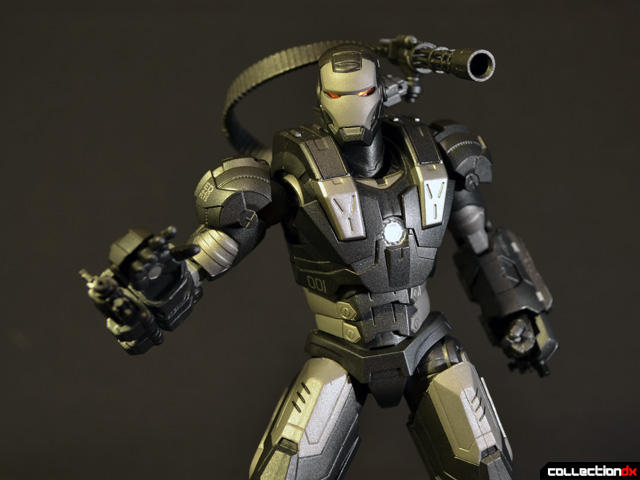 War Machine comes with three sets of hands: fists, karate chop hands, and splayed open hands.  The hands are easy to swap with durable ball joints.  The wrist guards are hinged and attached to the forearms, accurate to the suit in the film. 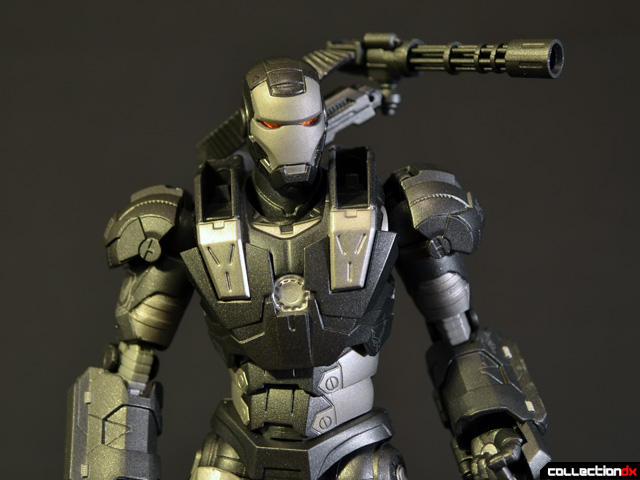 Figuarts Iron Man had swappable flaps, but War Machine comes with much cooler gimmicks.  The two blank panels on the shoulders come out, revealing empty slots with pegs in them. 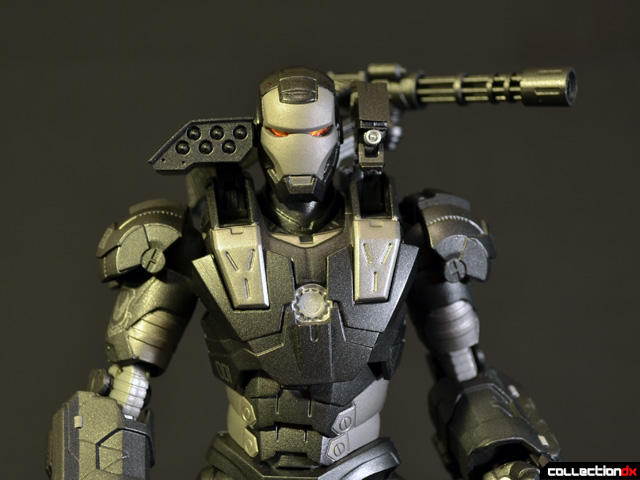 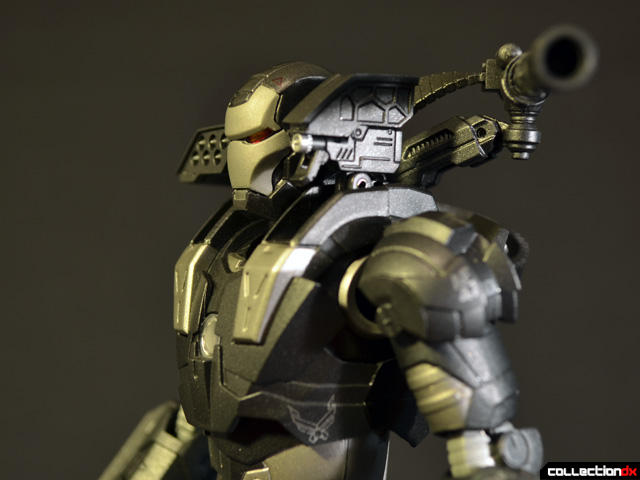 War Machine comes with swappable shoulder pod weapons with fine detail and posability.  He can be depicted in a screen accurate configuration with one micromissile pod and the ‘Ex-wife’ weapon.  The Ex-wife can elevate and features a movable little guard on the front. 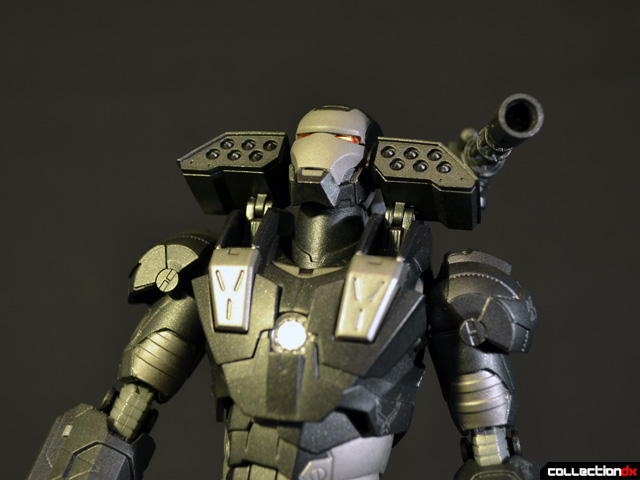 WM can also be geared up with two micromissile pods for some Itano-circus action! 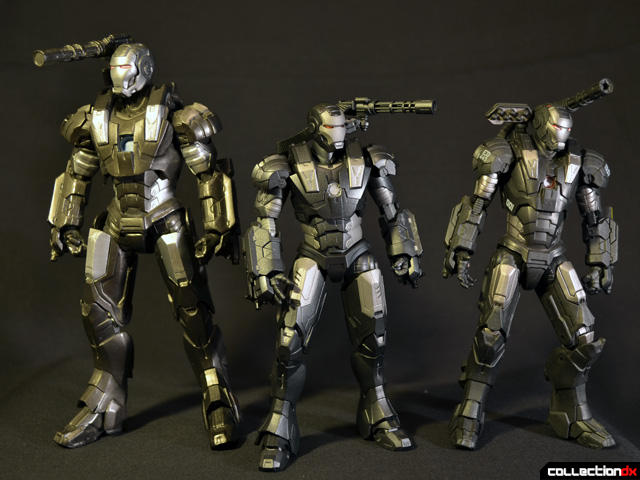 Bandai’s War Machine is well made and good looking, but how does it stack up next to other companies’ efforts?  Figuarts WM looks pretty good from here, shown with Diamond Select Toys’ version on the left and Hasbro’s six inch version on the right.  DST’s version is a mess, with limited shoulder articulation, no decals, weird proportions, and soft details.  Hasbro’s figure fares much better with decent detail, but suffers from limited articulation in the ankles, a lousy shoulder pad solution, an ugly helmet sculpt with poorly applied paint, and useless ankles.  I do not have Kaiyodo’s Revoltech version to compare with, but everything I have seen makes it look better than their Iron Man Mk IV/VI sculpt but still more stylized than Bandai’s effort with softer detail. 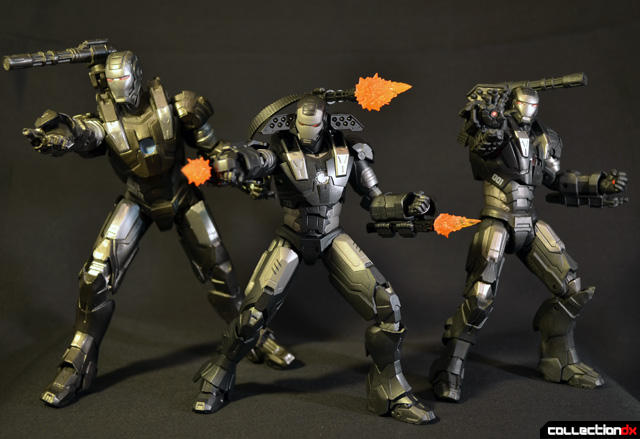 Posed for battle, Bandai’s superior design shines.  The DST version is an awkward and gawky tragedy that barely stands.  Hasbro’s sculpt looks stiff due to their weird hip joints and lack of ankle motion.  Even though Hasbro’s figure features ball jointed shoulders, it is not much more posable than the DST figure’s swivel shoulders without the shoulder pads looking out of place or popping off.  Bandai’s sculpt is leaner and sharper, but still manages to carry more weight and has a presence befitting of a guy in a two billion dollar suit armed with more guns than most militias. 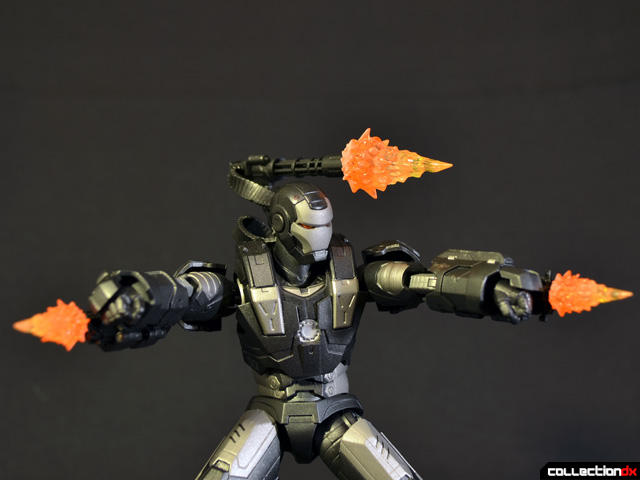 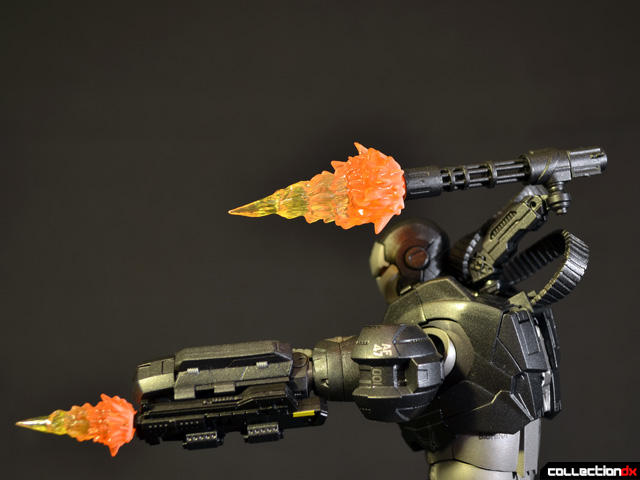 The remaining gimmicks are effect parts.  Two small and one large orange gummy pine trees are included as gunfire effects.  I like that they are rough explosion-ey looking parts to differentiate War Machine’s ballistic weapons from the smooth beam-effect parts included with Figuarts Iron Man. 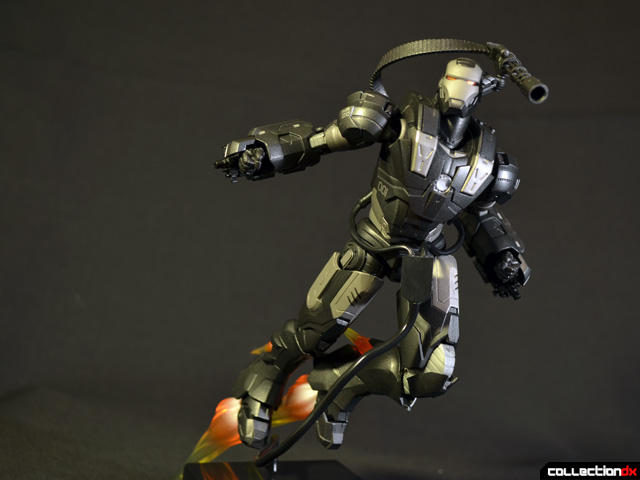 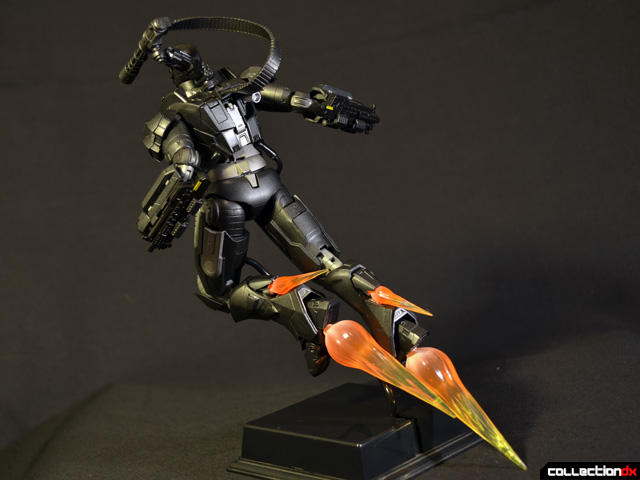 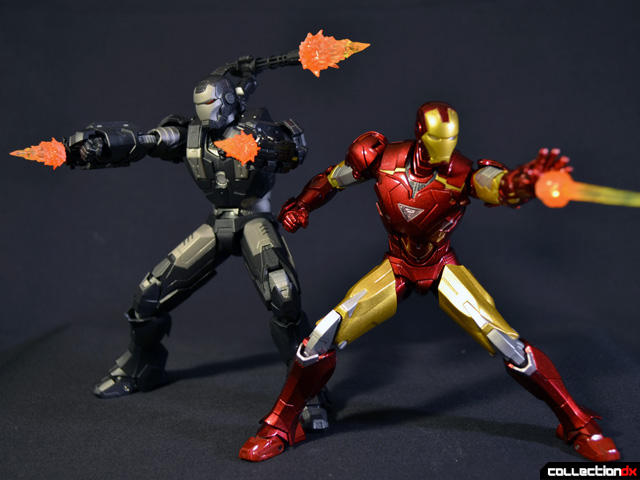 No War Machine review would be complete without some shots alongside his best friend, Iron Man!  The two figures complement each other very well and are both extremely well made.  You can’t have one without the other, and War Machine is well worth his 5000Y asking price.  I have seen US retailers mark WM up a little more than Iron Man, so he might be worth importing instead.  He is definitely one not to be missed! 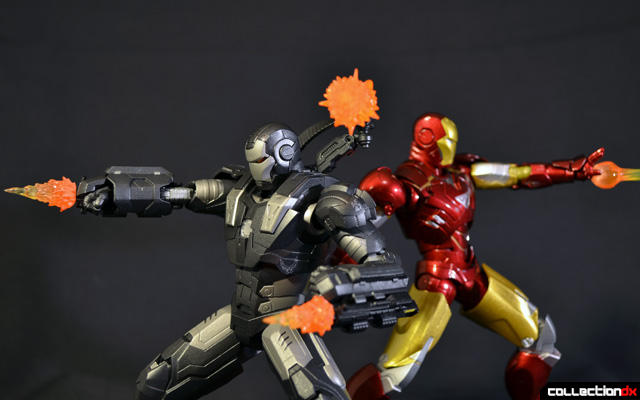 You're telling that to the guy in the two billion dollar suit! Come ON!

I knew there was a reason I liked you.

It's an illusion, Michael!

YOU TASTE THESE TEARS

the minigun on the 1/6 hot toys war machine fig CAN point up and down, which means it can be aimed pointing forwards in flying poses (contrary to your statement in the review) - there's a 'cut joint' just before where the minigun connects to the arm. it's fairly hard to see if you don't know where to look for it. it's noted in the instruction leaflet, but i still spent a good few minutes looking for it and was very hesitant to twist it the first time as i still wasn't sure it was there and feared breaking the gun :D

I've owned that toy since it was released and I did not know that. I'm going to have to go home tonight and check it out!

glad i could help :D
i bet you have more ideas for great poses now!