Forrest Gump is the 1994 film about Forrest Gump, a slow-witted guy chasing after his childhood sweetheart. Although his love eludes him for much of the film, Forrest finds his way into a multitude of historical moments and even meets many important people.

Although Forrest Gump is an awesome movie, the movies eponymous character never got an official action figure release. This is a wrong that two Chinese companies decided to right. The one we are looking at today is made by an unknown manufacturer.

For this release, Forrest comes in a cheap clear plastic coffin. 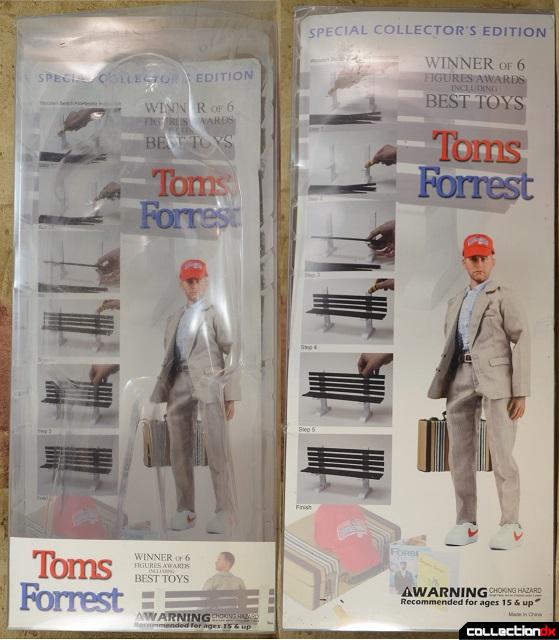 Both the front and back display the same information. According the package’s poorly worded claim, this toy is the winner of six figure awards including Best Toys. Somehow, I doubt that; though it is a funny nod to the critical acclaim that the movie Forrest Gump received; Forest Gump won 6 Oscars, including Best Movie. The packaging also claims that this is the Collector's Edition, but I am pretty sure that this toy is never going to appreciate in value and become a sought-after collectible.

The figure is not a very good representation of Forrest Gump. 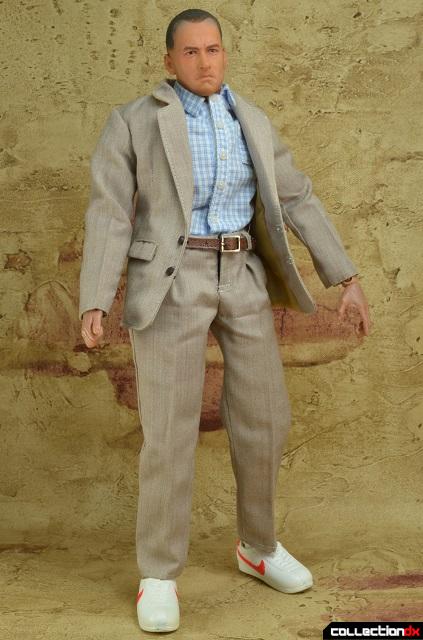 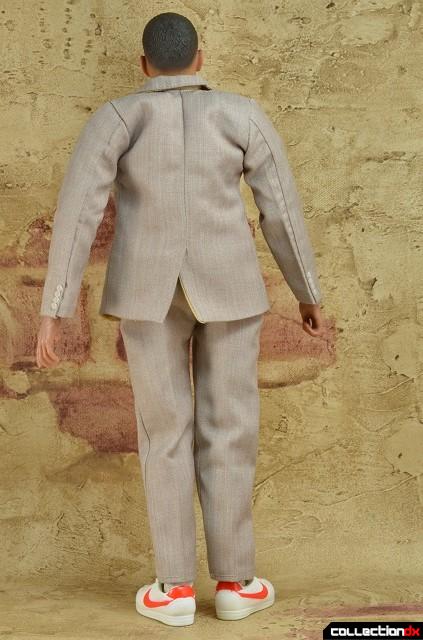 The face fails to capture the likeness of Tom Hanks in his role as the happy-go-lucky Forrest. 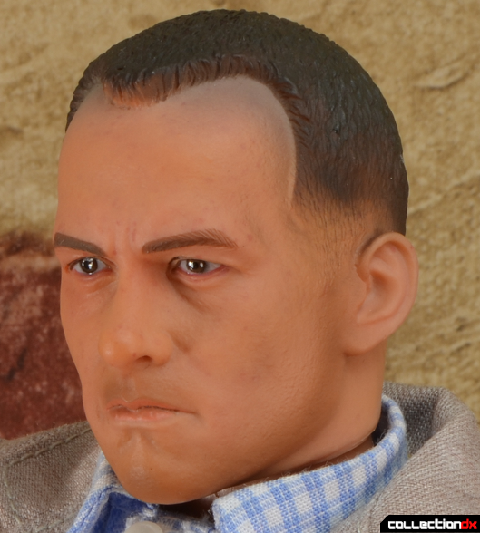 Why so serious?
While some of Tom Hanks' features are present in the sculpt, to me it looks more like what the adult child of Tom Hanks and Bruce Willis would look like.

The clothes look kind of like the ones Forrest wears in the movie, as he sits waiting for the bus. With the clothes, like with much of the toy, the effort to be accurate was only a half-hearted one. First of all, the clothes fit rather loosely. The checkered pattern on the shirt is not accurate to the movie. Also, Forrest’s pecs look like he has been hitting the gym in between his epic adventures. 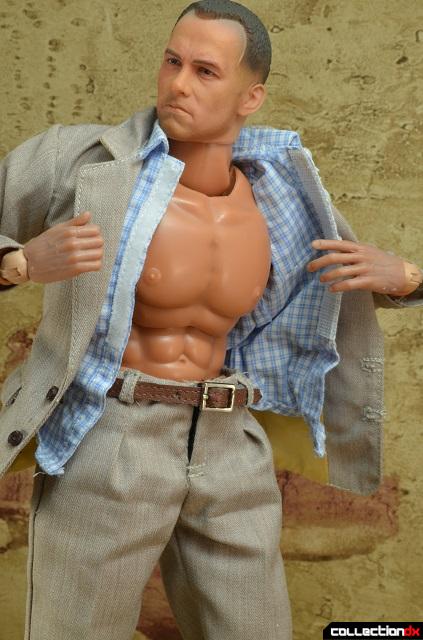 This is due to the fact that a generic body was used for this toy.

The Nike shoes have very plastic look and lack the muddy finish of Forrest’s shoes in the movie. 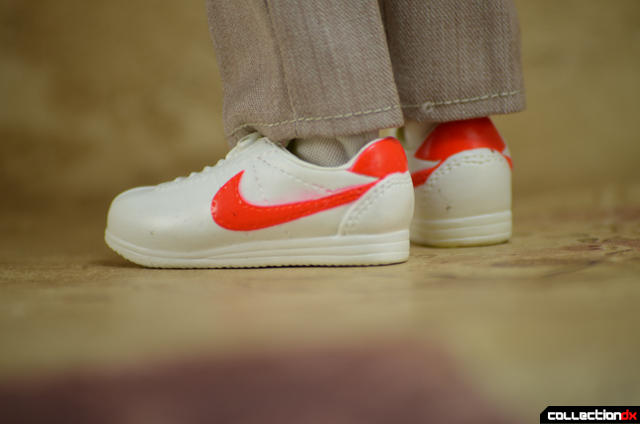 The body used for this figure is a generic 1/6 scale body, with 4 hands that are equally as generic. I would normally say interchangeable hands, but with this toy that might not be the case. The holes on the hands are much smaller than the pegs of the wrists. So putting on a different set of hands on Forrest proved to be pretty impossible. Just taking off the original pair was hard enough, since the peg that goes into the arm slides out with ease, unlike the hands.

Articulation for the figure is decent. 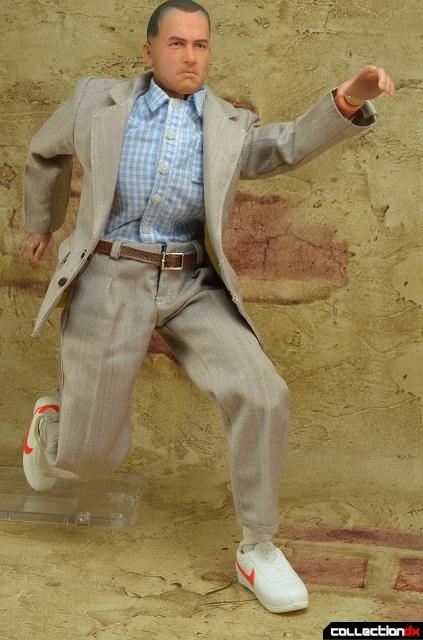 The only complaint I have is that the ball joints at the ankles are a bit on the loose site.

But what this toy lacks in terms of accuracy and articulation, he makes up for with some neat extras, some of which also lack accuracy to the source material. 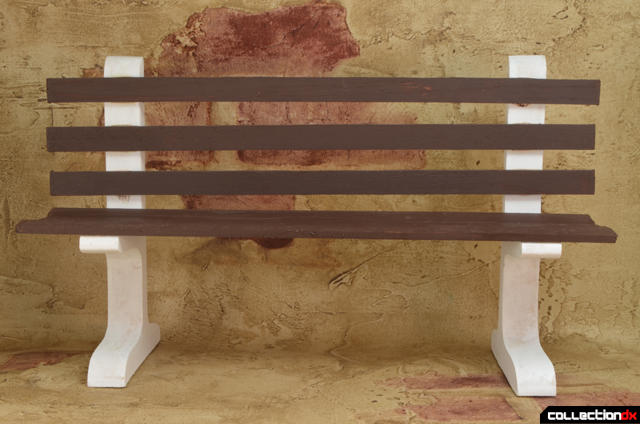 This bench is smaller than the one in the film and is pretty rough around the edges. The cuts on the white pieces of the bench are very uneven. 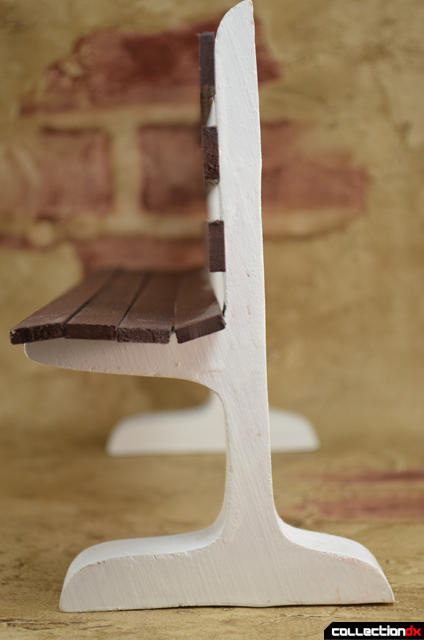 Another thing worth noting is that the paint was applied haphazardly. Some parts have too much paint and others parts don’t have enough paint which is evident by the fact that you can see the wood underneath.This reminds me of the kind of thing you would put together in a High School shop class.

If you can overlook the homemade look of the bench, it makes a good gathering place for your 1/6 scale toys. Since I don’t actually own any toys in that scale, my other toys had to make due. 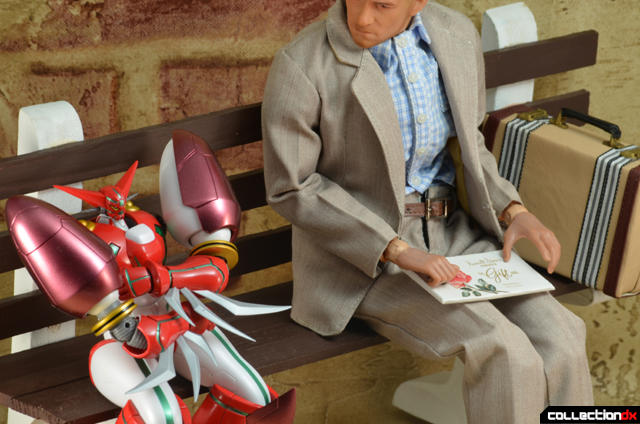 Shin Getter 1: Oh man, I am going to be late prostate exam. Where is that bus? 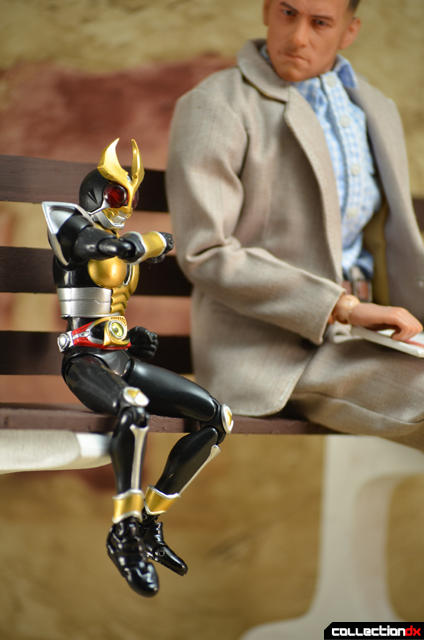 Agito: That bus sure is taking its sweet time. 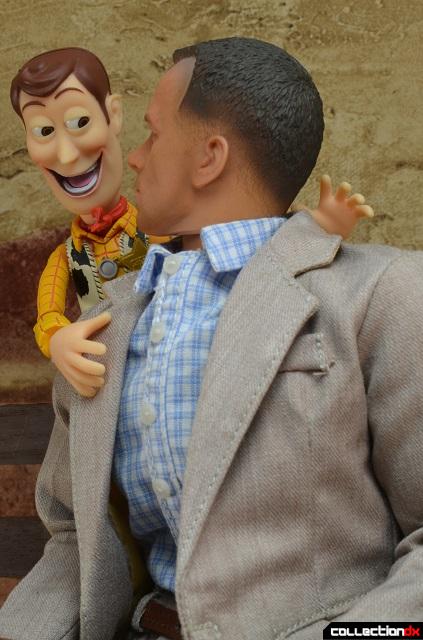 Woody: Mister, you sound awfully familiar. Talkin' to you is like talking to another version of myself... Let me hear that story about how you punched out Jenny’s boyfriend and she took you back to her dorm. I am going to pretend it’s me in the story.

Also included in this set is a Bubba Gump Shrimp Co. hat, which doesn’t really look right on Forrest. 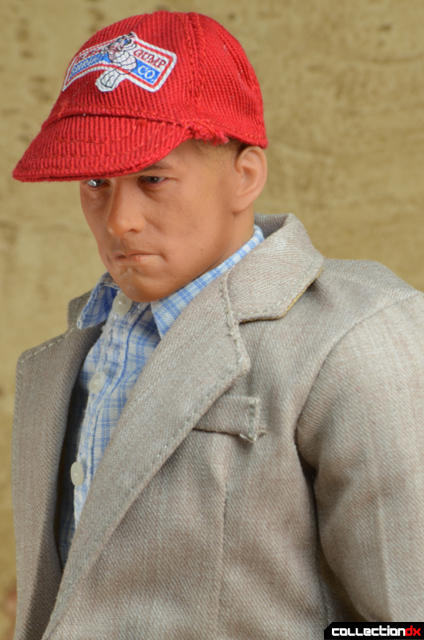 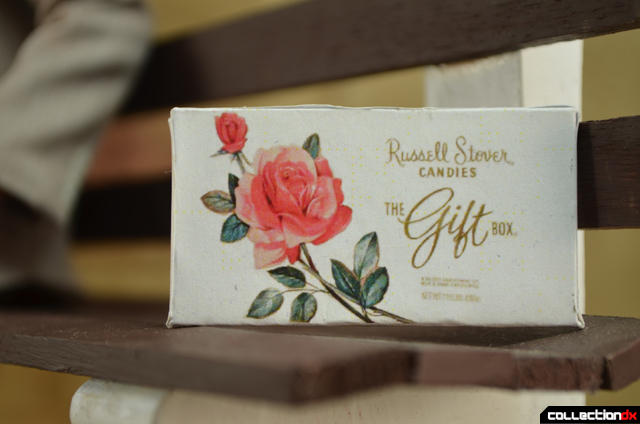 Life is like a box of you you know what. 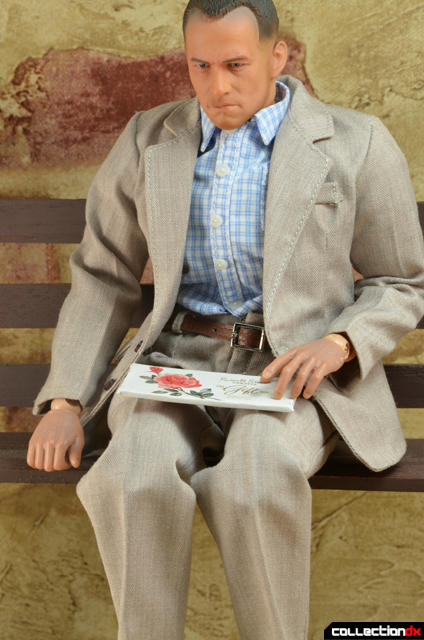 Another neat nod to the movie is a white feather that comes in this set. 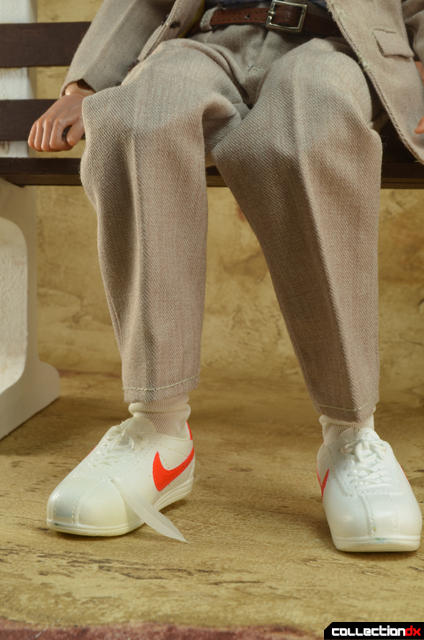 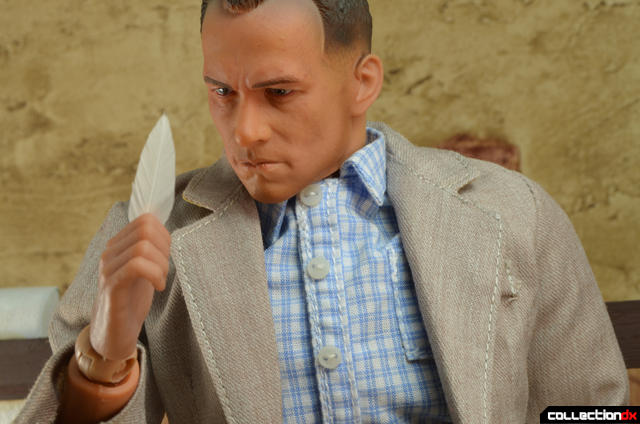 This of course is the feather that appears during the movie and is one of the more abstract objects of the film. The director stated that its meaning is really open to anybody’s interpretation of what it means. Some of the actors have said that the feather represents fate, luck, destiny and other forces of life that take Forrest through his amazing journey. 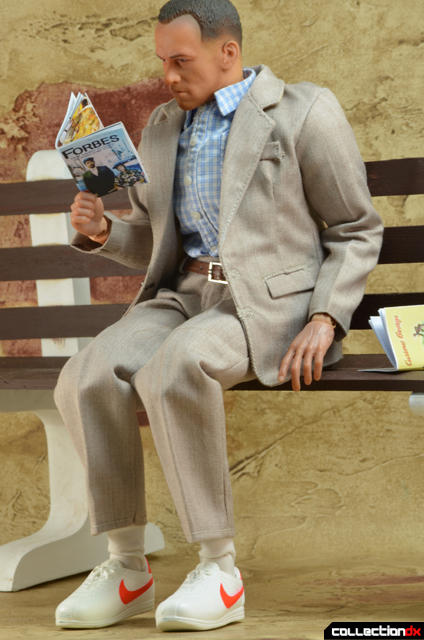 The pictures in the magazine, which appear to have been taken off a Google image search. 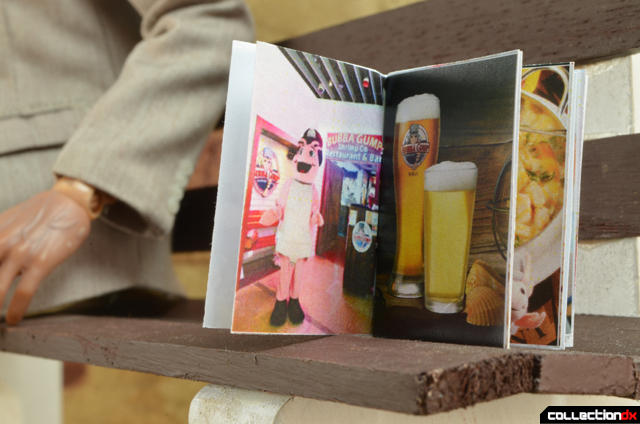 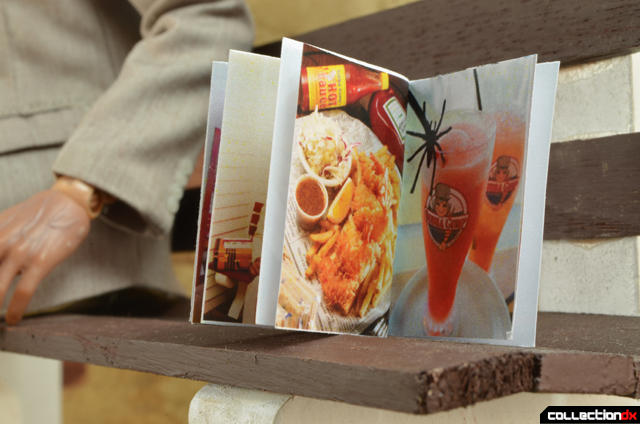 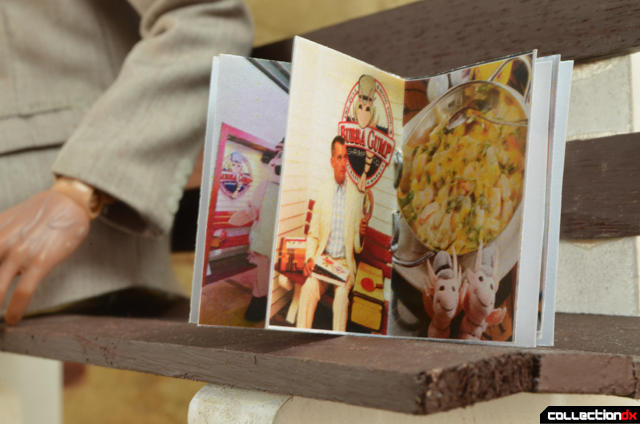 These pictures are held together by a couple of regular sized staples, which break the sense of scale that this toy is trying to achieve. Also, since only one side of the paper is printed on, and the blank sides are not glued together, you can see the blank sheets every couple of pages. 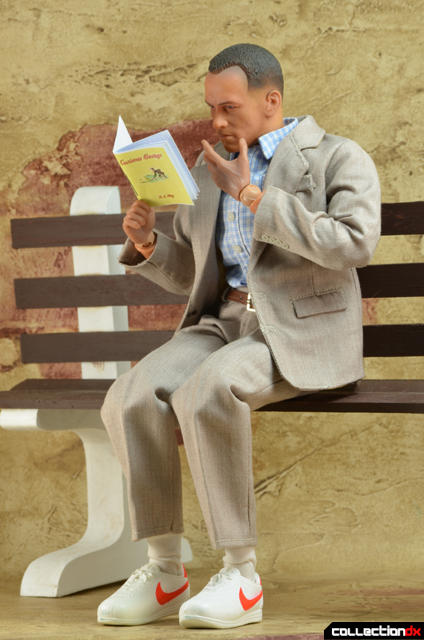 This piece of paper media does not have any illustrations on the inside; all of the paper is grid paper. 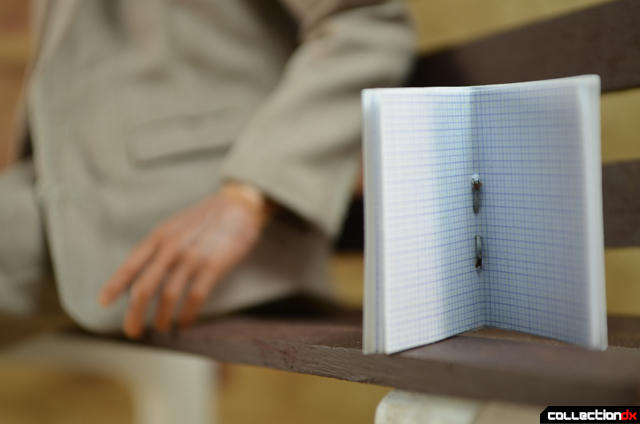 An odd addition to this release is Toms “Oscar”. 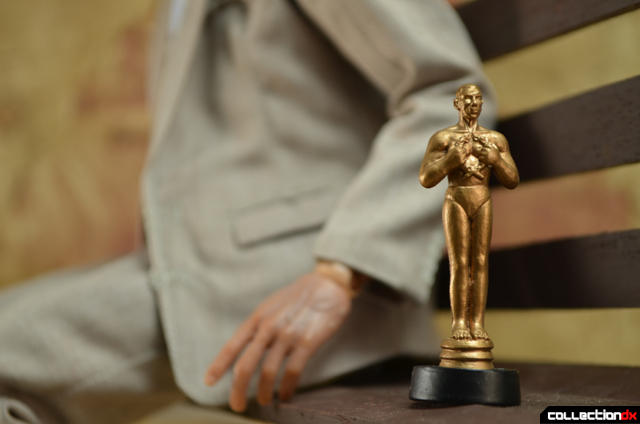 Also included is a ping pong paddle with a poorly sized picture of Chairman Mao. 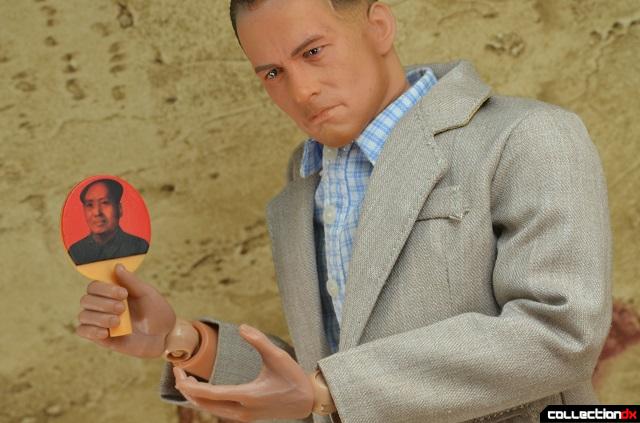 The paddle, like many other things in this release is inaccurate. The side with the Mao’s picture should be the black side of the paddle. Not on this paddle though, since it has two red sides. Also, in the film the image of Chairman Mao is a drawing. Instead we get an actually picture of Mao.

To keep all of his things, Forrest comes with his suitcase. 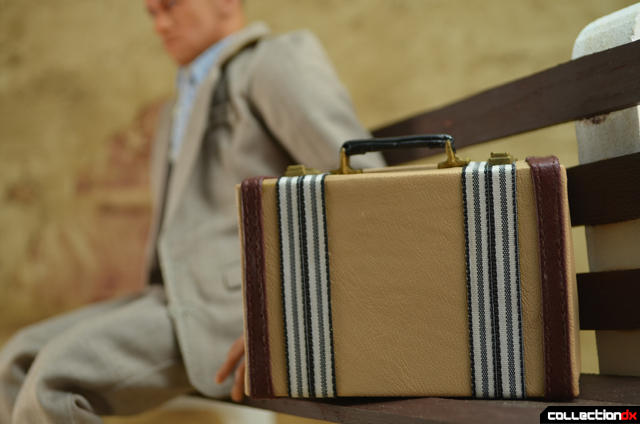 It is a nice little suitcase with a cloth interior. It even has a couple of plastic latches at the top, which work most of the time. 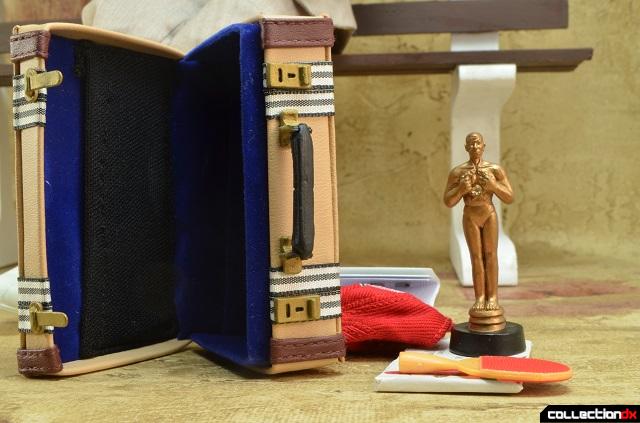 The major gripe I have with the suitcase is that Forrest cannot actually hold it. The handle at the top of the suitcase is too thick to go into Forrest’s hand. On the box, it clearly shows Forrest holding the suitcase, but there was obviously some trickery done for the shot since the right arm is obstructed by the toys body. 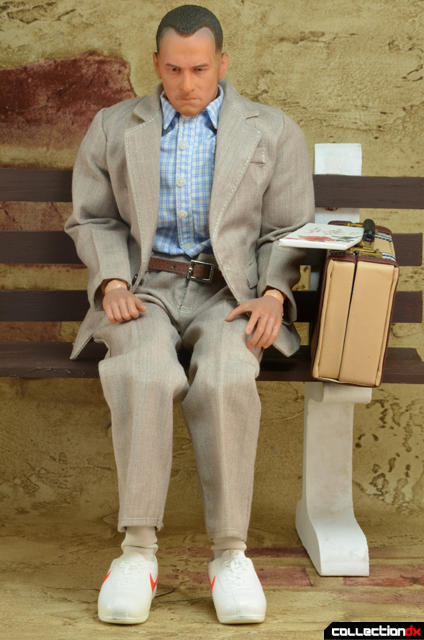 While handling this toy did not impress me, it was a neat toy to check and and it left me wondering who made this toy. Was it some small company looking to make a few bucks on a movie license? Or was the production of the toy run by fan of the movie. Whatever the case may be, this turned out to be an interesting unlicensed 1/6 scale toy.

A special thanks to my buddy Joe for letting me borrow this and asking me to review it!

Too legit to quit?

but I'm pretty sure Forrest Gump didn't have a permanent case of fart whiff grimmace.

They weren't trying to hard to get Forrest's likeness correct.

Maybe they are going to reuse the figure for a Saving Private Ryan release?!

What a strange odd bootleg release!

Could be. Maybe that was in the works, but never happened.

I could sit here and write several pages on my interpretation of the movie, but I know for a fact that no one wants to see that. So I will just say, nice review!

Is it just me, or does this figure look like Wentworth Miller from Prison Break?

A couple other inaccuracies... the chocolate box seems way too thin... and that's not even an Oscar statuette. It's holding a wreath, where the Oscar should be holding a sword.

That Woody photo is priceless.