Riderman is the official unofficial fourth Rider who first appeared in the 1973 tokusatsu television show Kamen Rider V3. After being framed by his superior, Joji Yuki was tortured with acid which resulted in the loss of his right arm. Yuki was saved by his friends and was remade into the warrior known as Riderman! After defecting from Destron, he now he fights alongside V3 in the hopes of defeating his previous ruling entity!

With this, Bandai gives us the S.H. Figuarts Riderman from the Tokusatsu show entitled Kamen Rider V3. An amazingly sculpted, beautifully colored, and accessory coupled figure, Riderman will please any SHF fan and Kamen Rider fan.

Packaging:
Riderman comes in the regular SHF box. It has an open front showing off Riderman inside with cool fill-less photos on front. 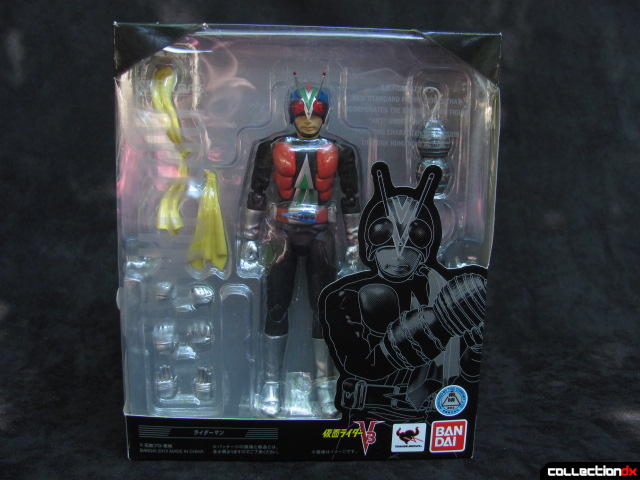 The back shows off the features of the toy and all sorts of other cool stuff that will make you want to buy it. 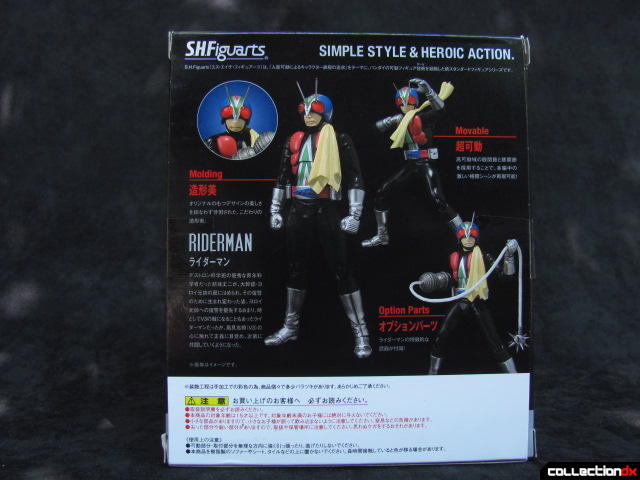 Aesthetics:
Riderman is simply gorgeous to look at. His paint is wonderfully deep with perfect 1970’s hues and shades; the colors don’t look like his suit ACTUALLY would, but more like they did 40 years ago on the original film. They look old and oversaturated, like he’s still in Technicolor. 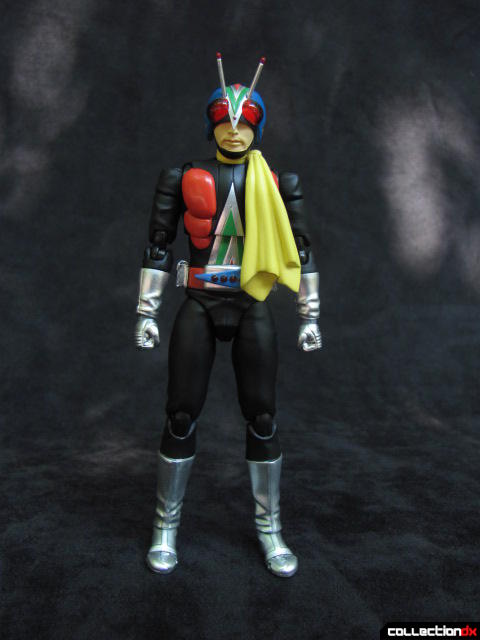 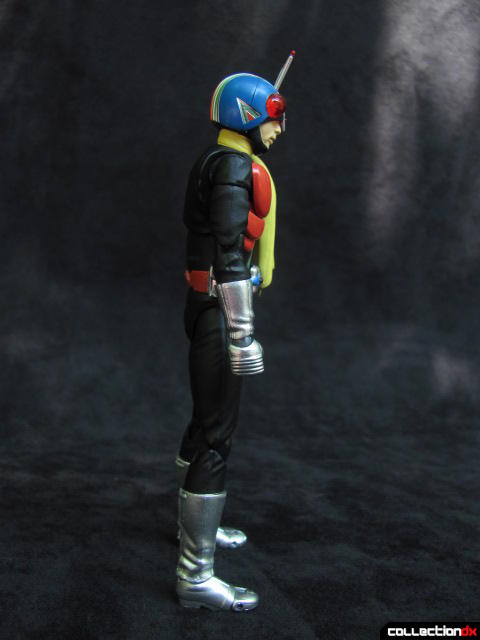 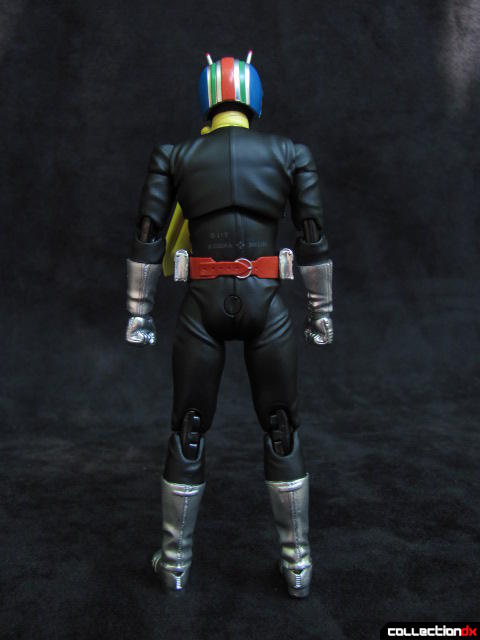 His colors are all so deep and wonderfully applied; they give a nice offset to the matte of his body suit and the silver of his gloves. Everything is perfectly garish and colorful, a staple of showa era riders, something that is endearing even to this day.

The detail on Riderman is excellent. There are folds in his suit, gloves, and boots that strongly emulate fabric; it jumbles up at all the correct places and looks excellent. The lines and grooves on his helmet and chest are beveled and give depth to the sculpt. Little doodads and button holes are present on his belt as well. 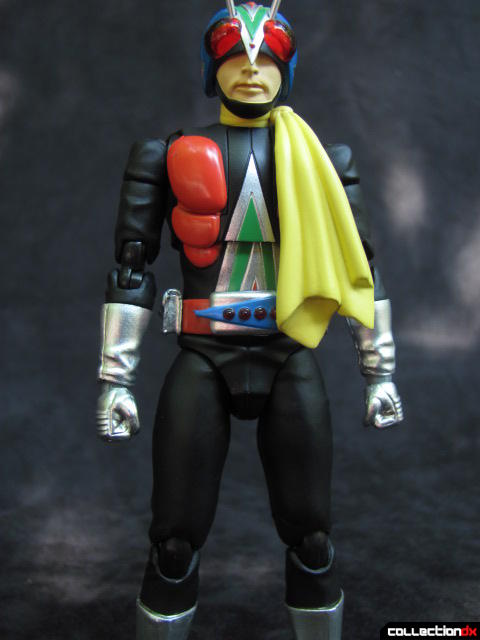 Riderman’s face sculpt is also something to be revered. The SHF line hasn’t been one for human faces—they are mostly helmeted or in an anime style. Riderman having a human face is unprecedented and the effect looks great. It’s a simple sculpt but is very effective and really makes Riderman standout from all of your other Riders. 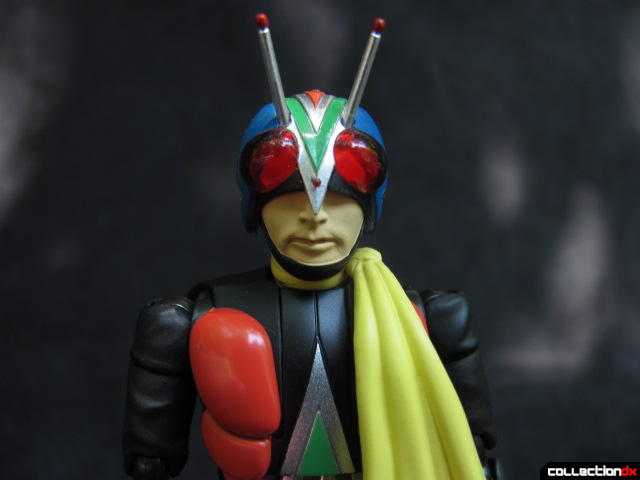 Articulation:
Riderman sports a wide range of joints and can be posed quite expressively. He has all the normal joints—toe joint, type-2 hips, double-jointed knees, waist, HUGE ab-crunch, universal shoulder, double-jointed elbows, and BICEP SWIVEL. 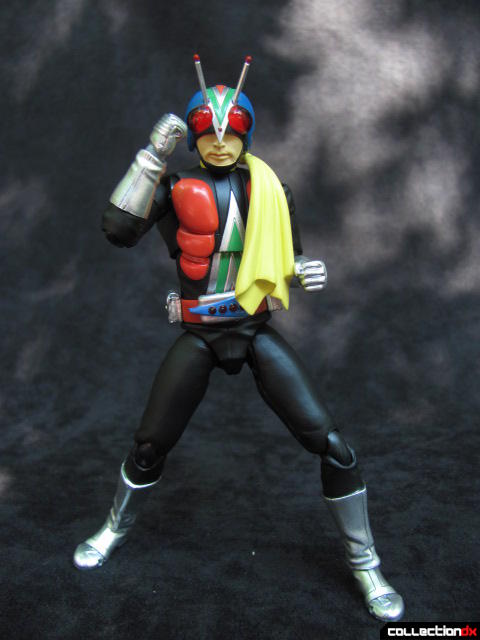 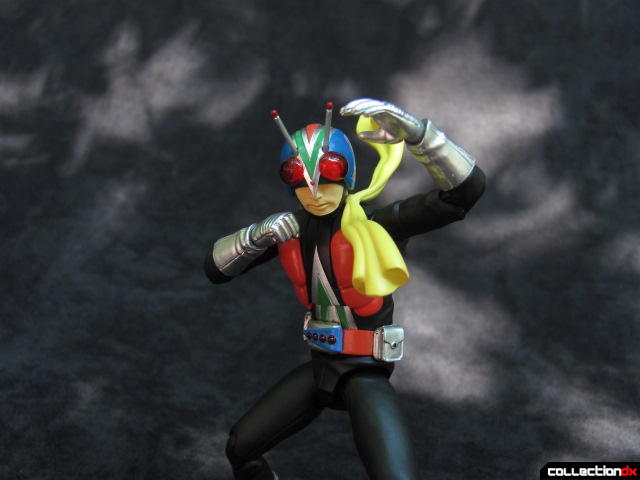 His feet are only ball-jointed, and said joint isn’t very deep. This kinda blows as it restricts some of his posing prowess; they also aren’t metal. His head, however, is on the most complex joint I’ve seen. A very wide neck with a double-ball-jointed neck makes Riderman very expressive. 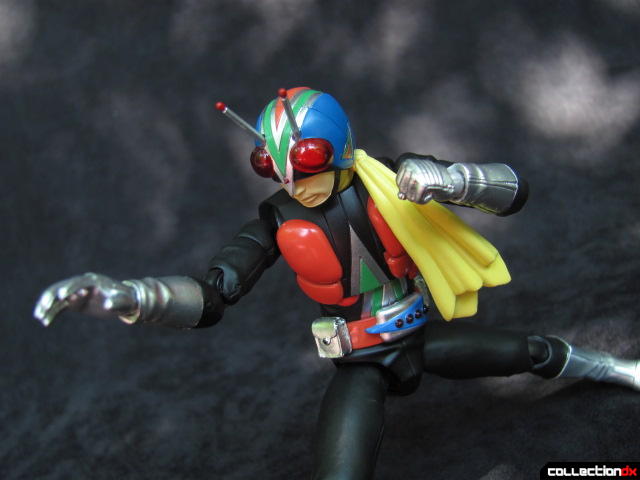 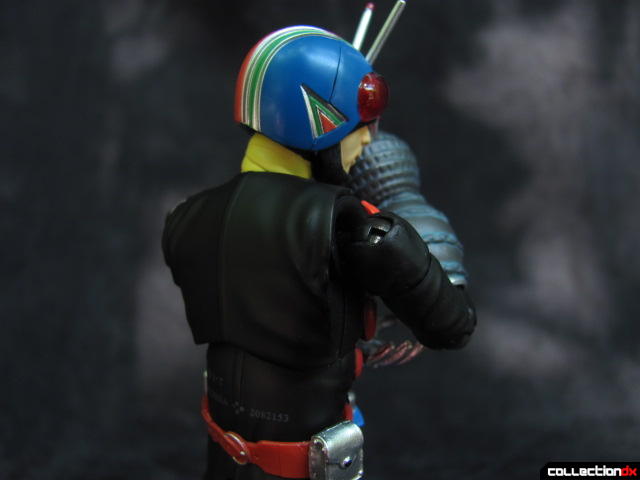 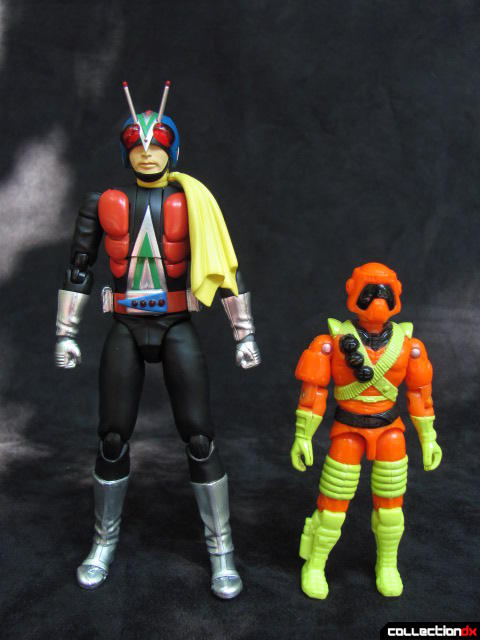 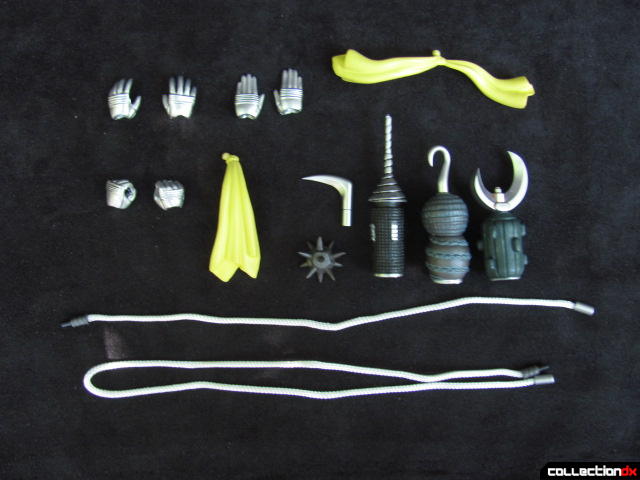 The cassette arms connect to a peg on Riderman’s right arm. His right forearm is easily detached and replaced with any attachment shown. This is a simple and fun process. All of these attachments have the same level of detail as Riderman himself and look great on him. 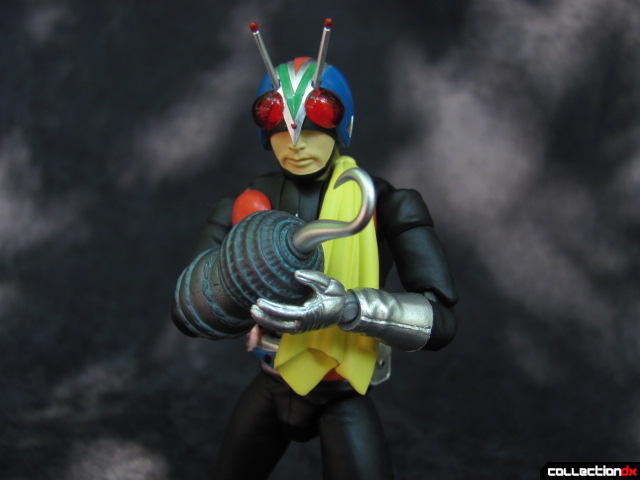 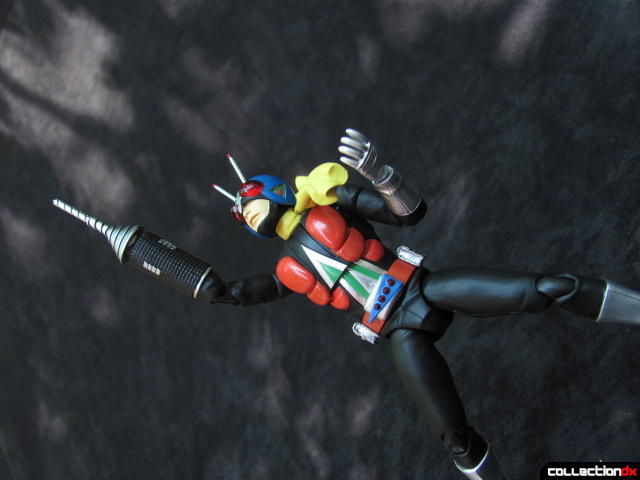 His scarves work on a simple ball joint and can be moved about to emulate weather, action, and mood. 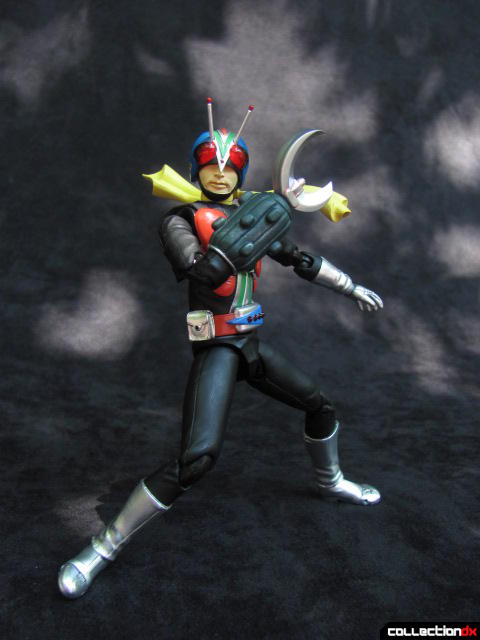 Gimmicks:
The main gimmick for Riderman—besides being super articulated—is his arm switching gimmick. As expressed prior, it works wonderfully well and looks great, too. 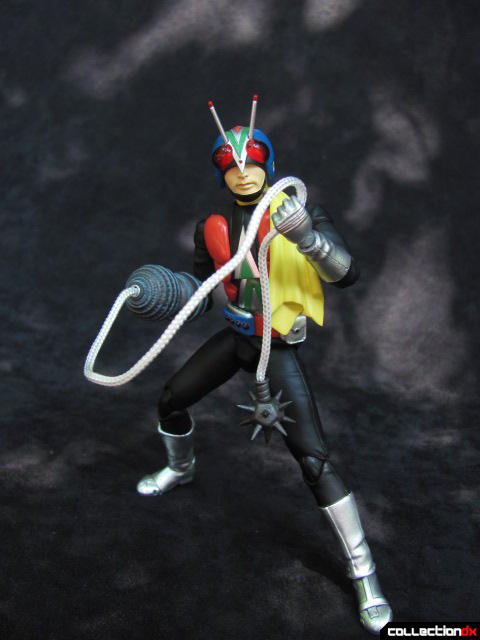 A simple peg system is used to put his hook, pick, and ropes onto his Rope Arm. The rope will have to be strung through his hand for him to hold it; this is a little cumbersome, but doable. Also, and this may have not been intentional, but Riderman’s hands fit onto the rope’s end… 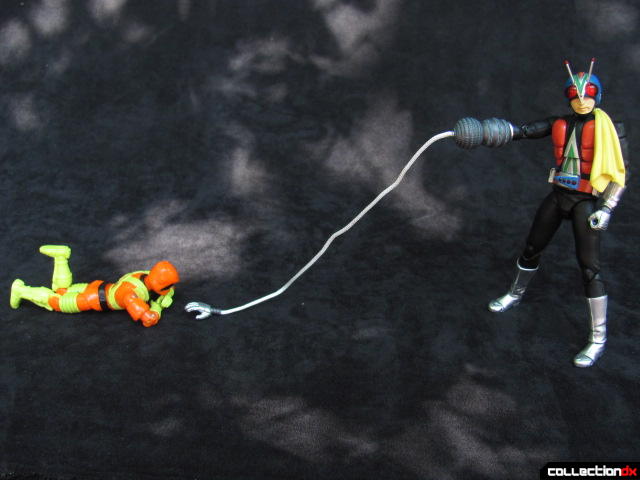 Closing Remarks:
Riderman is my favorite Rider for no good reason. This figure is everything I ever wanted it and an SHF to be. Riderman is gorgeous, being well detailed and painted. His sculpt and gimmick is fantastic, and he’s great to play with. His accessory count is explosive. With only unimpressive feet to bring him down, Riderman is a great figure; I highly recommend him. 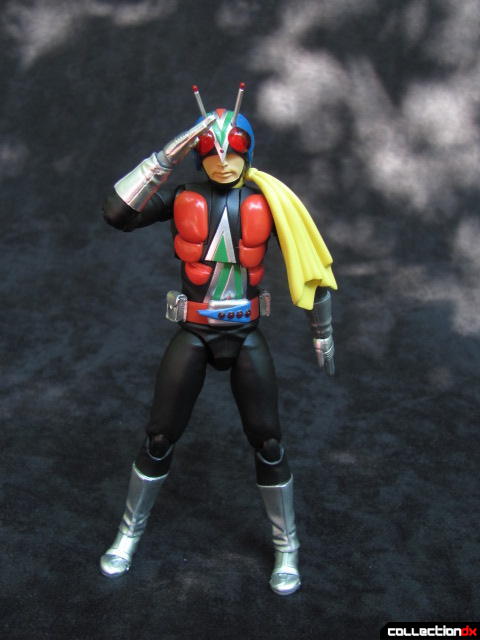