We are now officially at the tenth release in Saint Cloth Myth EX line and past the halfway mark for the Gold Saint releases in this line.

There is very little revealed about him in the series, other than his his deep appreciation for beauty, his cruel nature and his fighting style. As the guardian of the final Temple in Sanctuary, Aphrodite confronts Shun and Seiya on their way to the Pope’s Chamber. This encounter quickly becomes a fight between Shun’s chains and Aphrodite’s deadly roses. 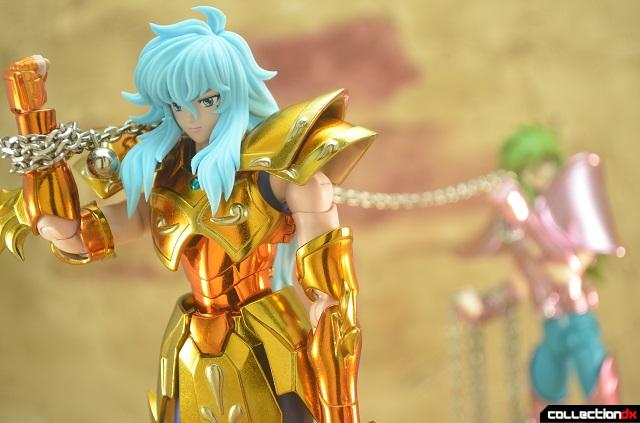 Let the battle of the bishounen (pretty boys) begin!

So like the other releases in this line, Pisces comes in a cardboard box designed to look like the Pandora Boxes of the show. Since this is where the Saints stored their armor, it makes sense that Badai made a Pandora box for you to store the parts of the toy. 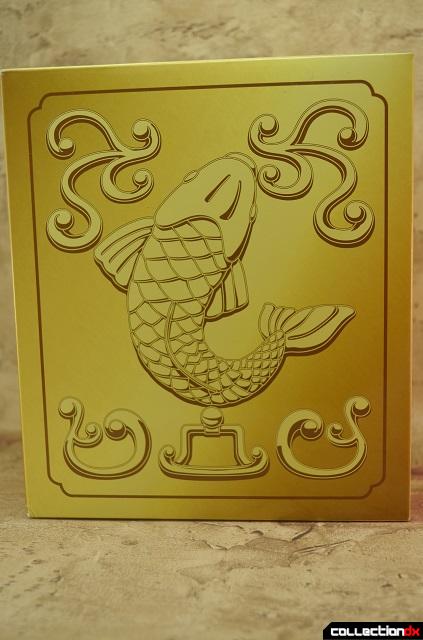 On the front of the box is the symbol for the Pisces constellation. Since the other sides of the boxes are the same on all of the EX Gold Saint releases, I am not going to waste review space showing you these sides.

The box comes packaged with a nice glossy sleeve over it. 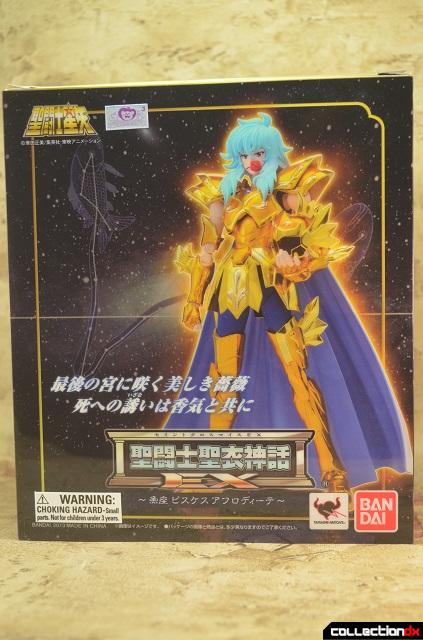 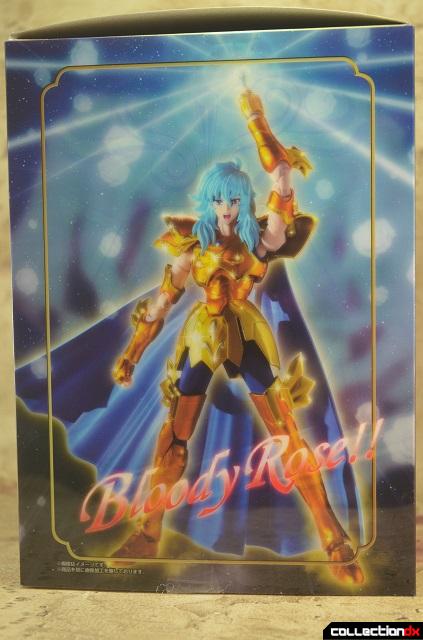 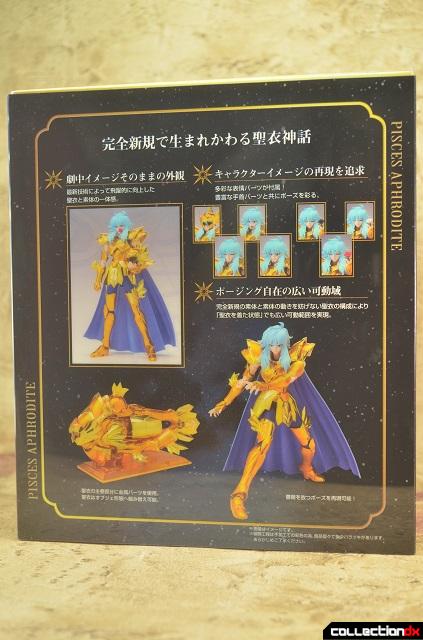 This shows the various product pictures that Bandai uses to sell these toys when they are sitting on the shelf. I totally forgot to take a picture of the side with the Object Mode on it, but since that is where the review is headed anyways, let’s just get to that.

The Object Mode for Pisces is of course a fish. It comes with a stand that holds plugs into the body of this fish at the part that is made of the chest armor. 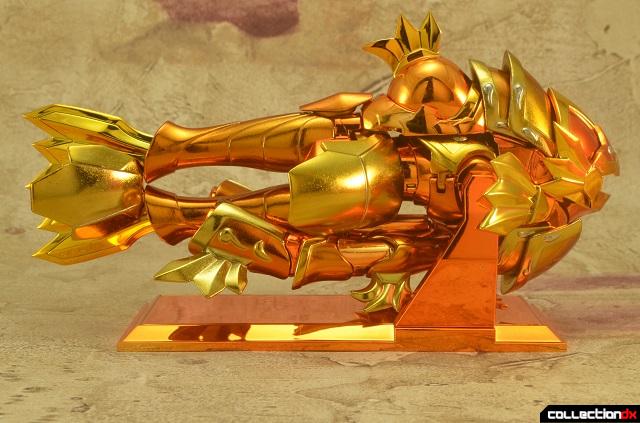 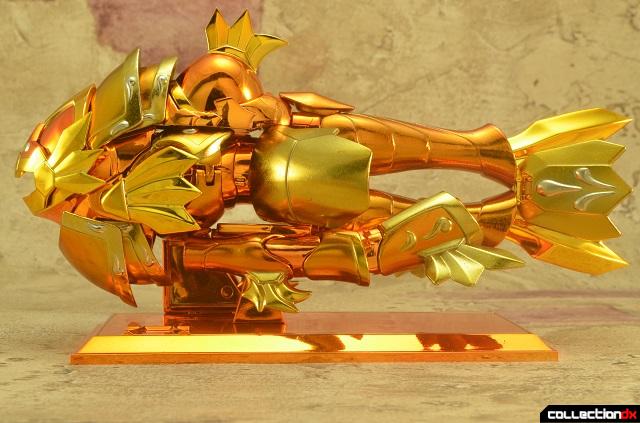 This Object Mode was pretty easy to put together and looks pretty good with all of the extended fins, panels and such making this a good fish totem made out of armor. 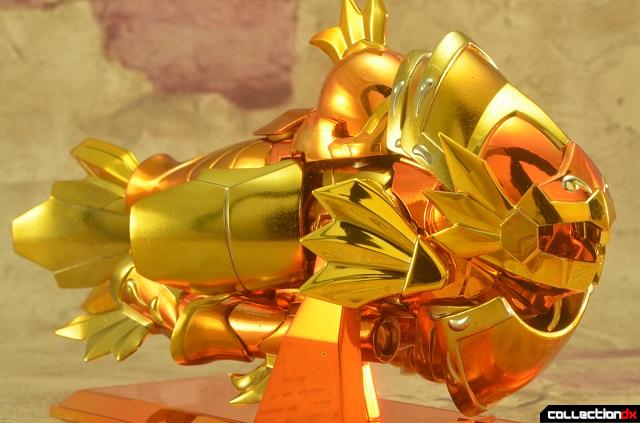 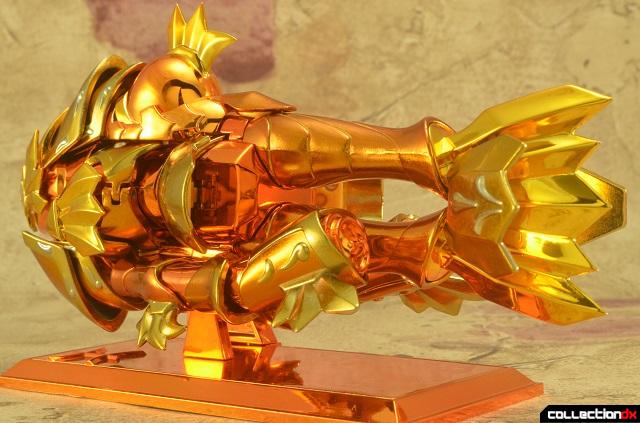 That being said, its design is a slight departure from how it looks in the show. Most notably, the gaps in the body of the toy are not present in the show. Also, the design of the Object Mode in the show is longer. The one for the toy condenses down the Pisces Object by re-arranging a couple of features of the design.

So Pisces, like the other Gold Saint in the EX line suffers from a severe case of malnutrition. 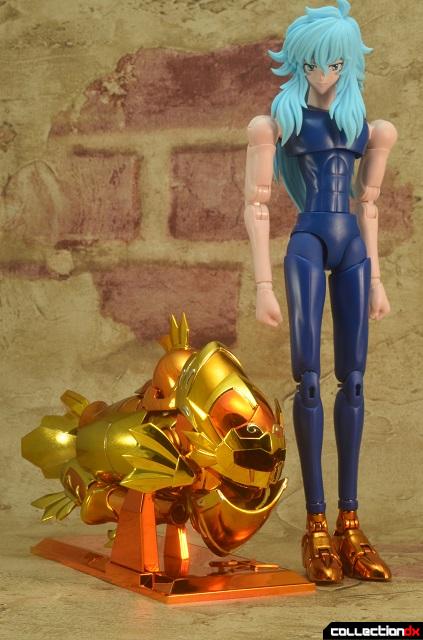 Luckily, this means that the figure looks good once all of the armor is placed on the toy. 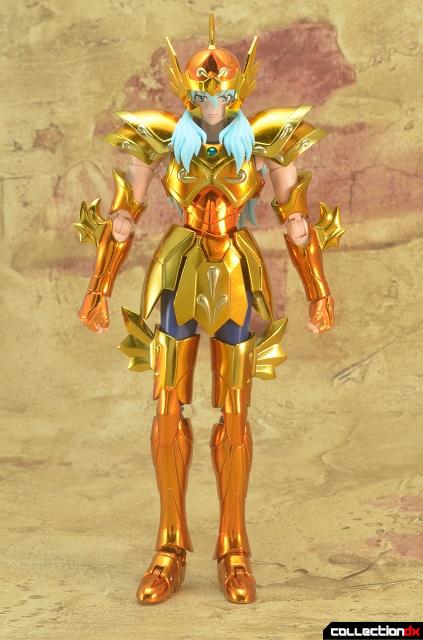 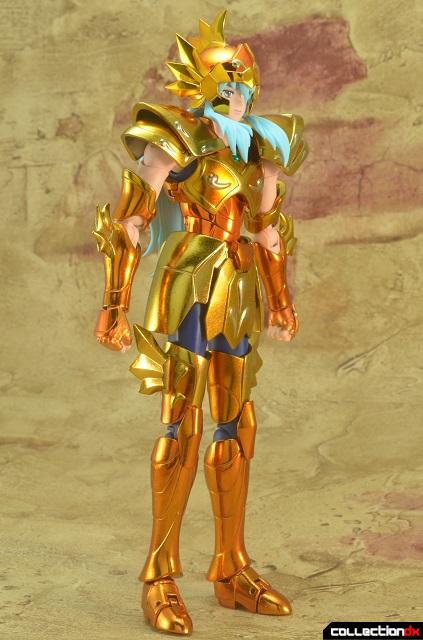 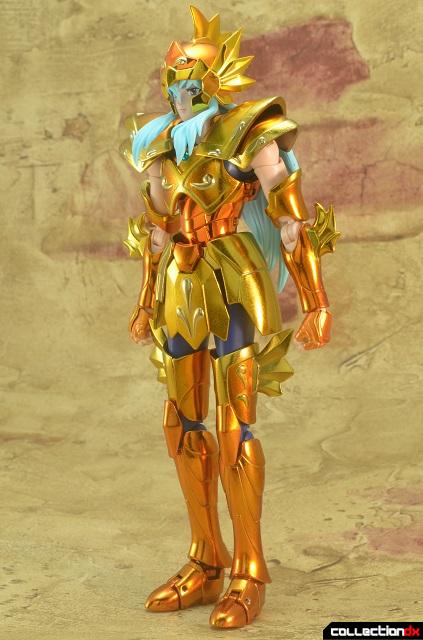 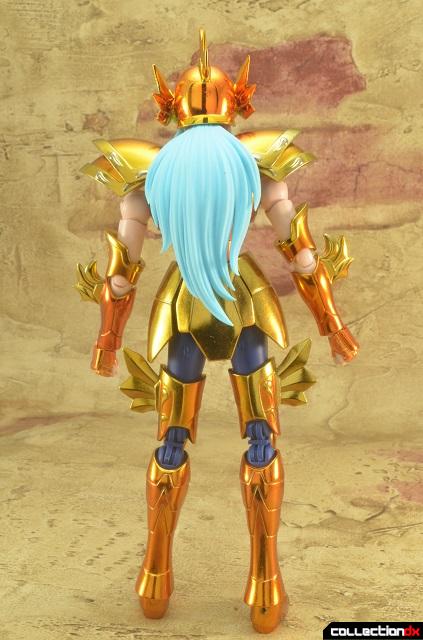 The fit between the armor and the body of the toy is very good. The only minor issues I had with the cloth were the loose fit of the helmet on the head, and the helmets two pieces coming apart once in a while.

The color of the Cloth stands out quite a bit thanks to the strong orange that was used on some of the armor. This makes the Pisces Cloth reminiscent of the Marine Scales of Poseidon’s generals. Which in a way is fitting since the Pisces Cloth’s theme is similar to that of the warriors of Poseidon. However, the orange is actually a bit too pronounced when compared to how it appears in the show. Don’t get me wrong, the orange appears in all of the right spots on this cloth. It is much more faithful to the design than the original release, which used gold in some of the spots that were supposed to be orange. Besides being more correctly colored than its predecessor, the armor itself is much more faithful to the source material. 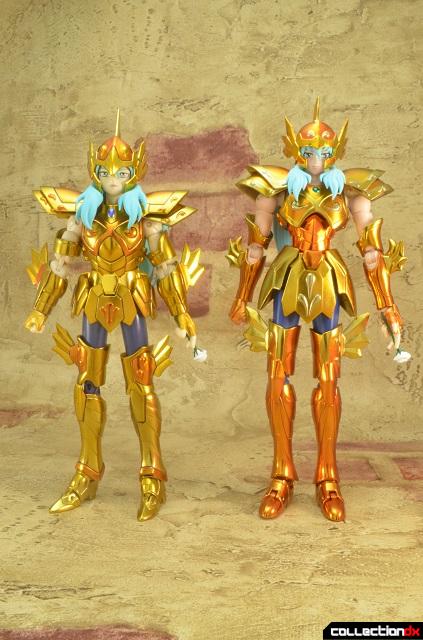 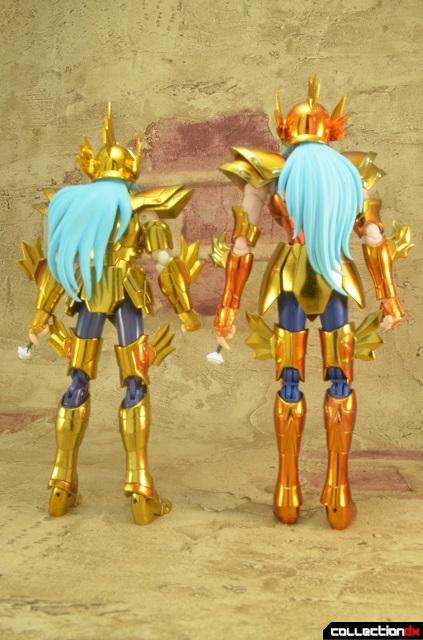 Just about every piece of armor on the new release depicts the Pisces cloth as it appears in the show. The only real exception being the slim armor that goes around the abs and lower back of the figure. In the show, this was a heftier piece of armor that is pretty much a part of the chest armor.

As with any great Saint Cloth Myth release, Bandai kept the plastic to a minimum on the armor for toy. Only the helmet, the covers for the back of the hands and the armor for the abs and lower back are made of plastic. 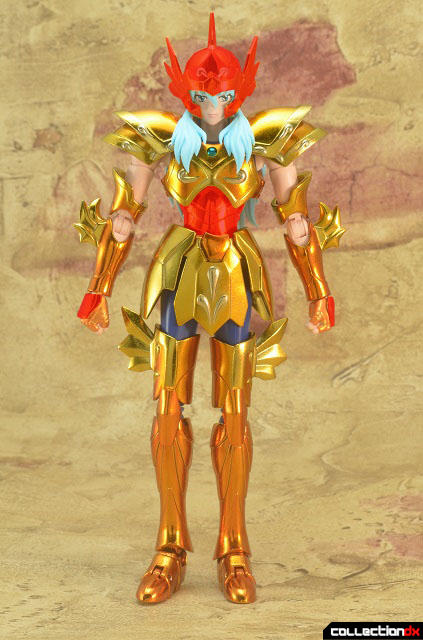 Which means every other piece of armor is nice, shiny metal!

While this guy has a lot of armor on, he still has a lot of good range of motion. The EX line is designed with getting great poses out of the armored figure, instead of the being a block of metal (which was the case with some of the older releases). Taking a knee is no problem for this pretty boy. 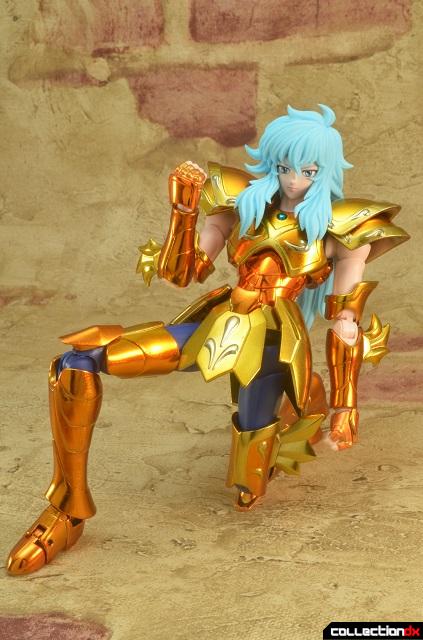 It is worth noting that the front skirt does not move up enough to allow the leg to move directly forward. Instead, the leg has to peek through the space between the front and side skirt.

Now Pisces Aphrodite is a character that fights in a very minimalistic manner, which is why many of the pictures from here on will not be so dynamic.

To compensate for that, here are a couple of shots showing of the articulation of this figure. 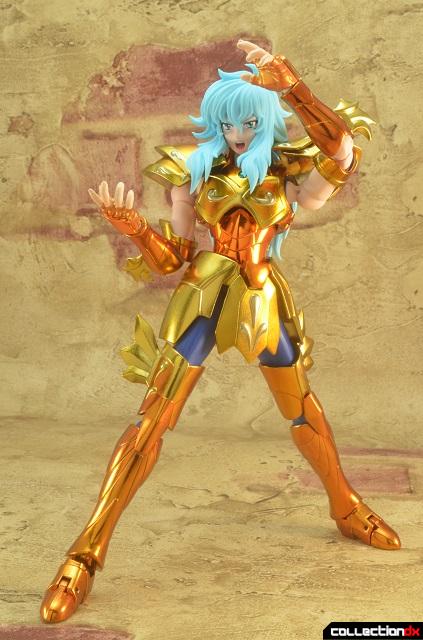 Pisces is getting ready to perform an Athena Exclamation… if only he had two Gold Saint buddies to help him out with this one. 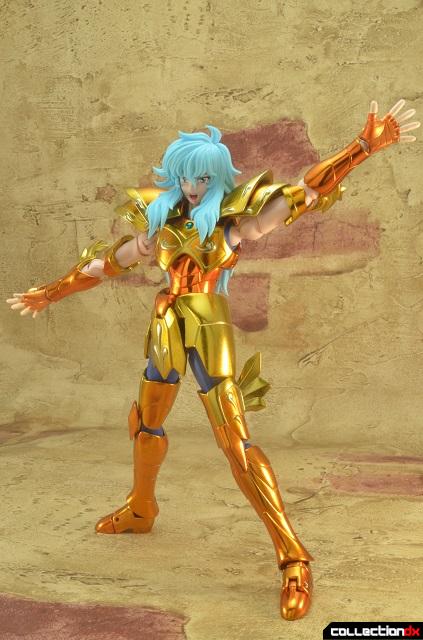 Here is the pose that he strikes as he readied an attack that was trumped by winds of Shun’s attacks.

As with all of the other Gold Saints in the EX line, Pisces comes with a cool three-piece plastic cape, that can be use get some nice dramatic poses out of this toy. 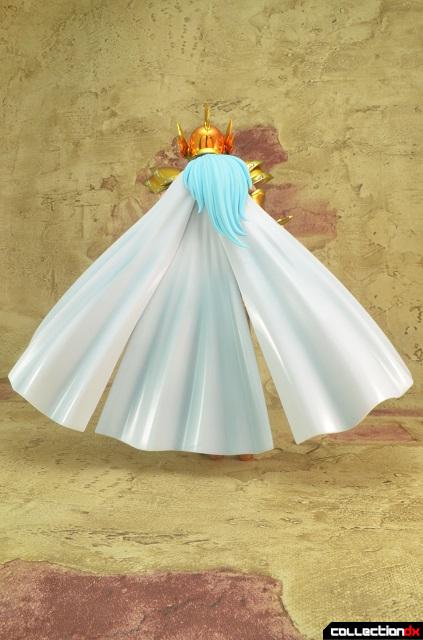 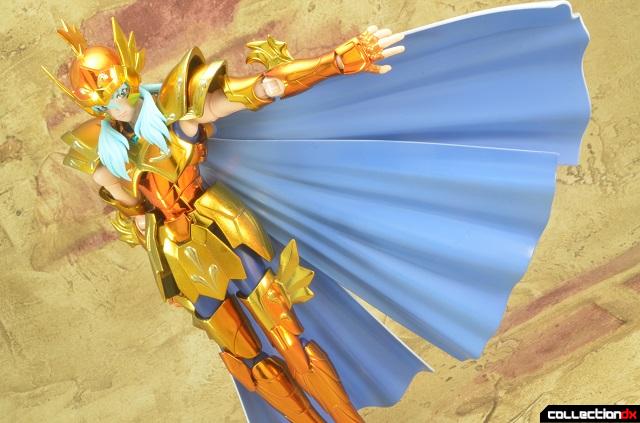 This EX release comes with five different faceplates that help add to the expressiveness of the figure. 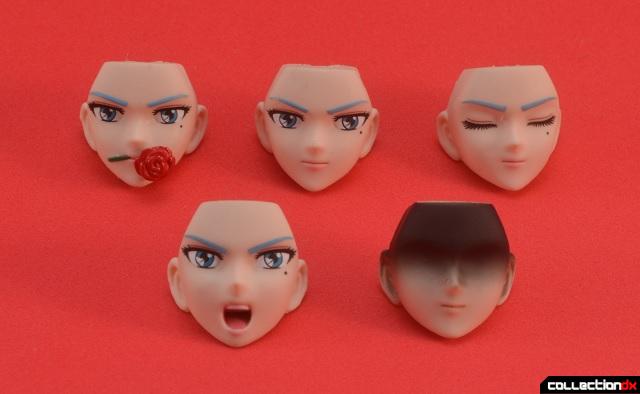 The somewhat-unique faceplate in this release is the one with the face partially blacked out. 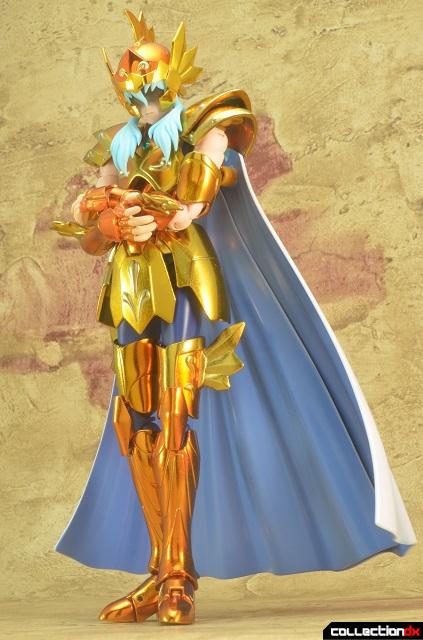 This face is to represent the mysterious man who guards the last House of Sanctuary. 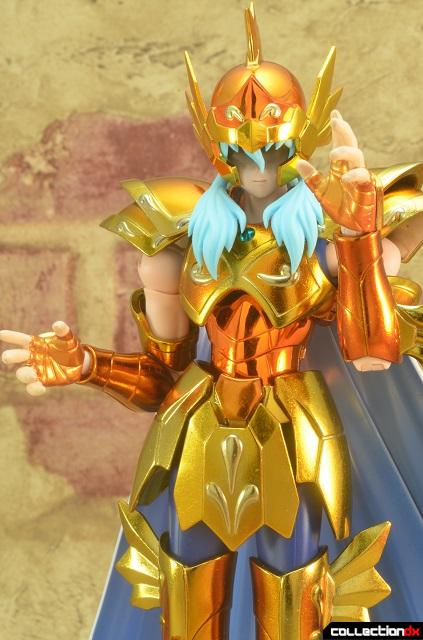 Oh no. Who could that be?

Okay. I guess there isn’t must mystery behind it considering this show has been out such a long time, plus I have already used so many pictures of the regular face.

The unique faceplate in this release is the one with Aphrodite holding a rose in his mouth, as he would sometimes do in the show. 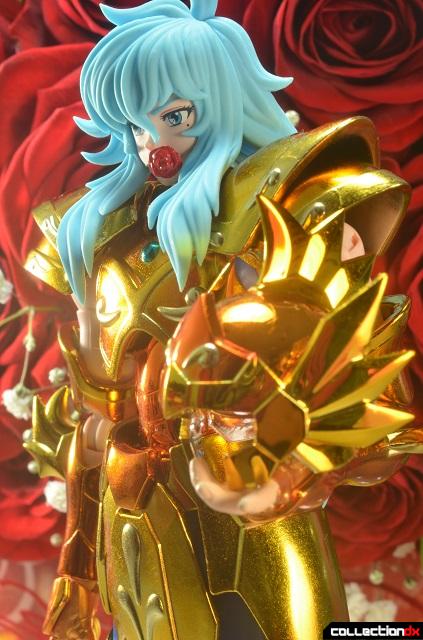 Pisces comes with several interchangeable hands: Two sets of closed hands (one set with and one set without armor), two of splayed hands and two special hands with rose stems on them. This set comes with 6 rosebuds that can be attached to the stems. There are 3 types of rosebuds( 2 of each) that are included in this set.

The Royal Demon Rose, which poisons the victim and causes him to slowly lose his 5 senses. 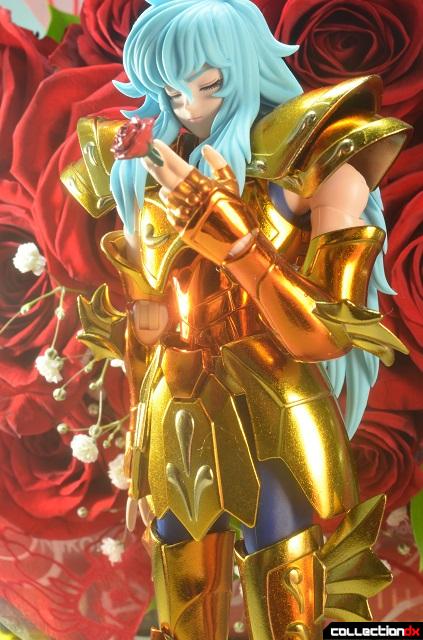 The Piranha Rose, which can shatter anything it comes into contact with. This is the one that Pisces uses to destroy Shun’ Andromeda Cloth. 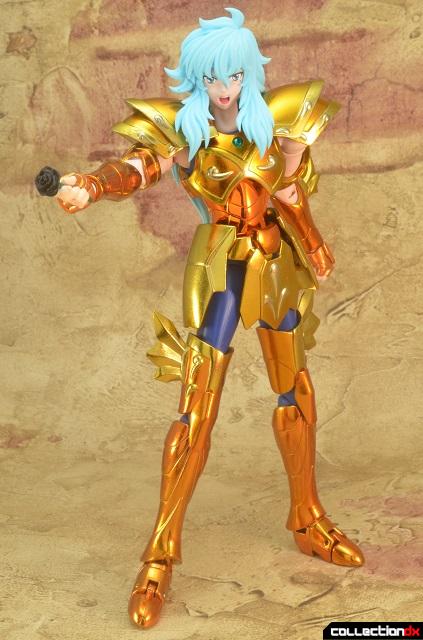 As you can see in this close-up, the roses are beautifully sculpted. 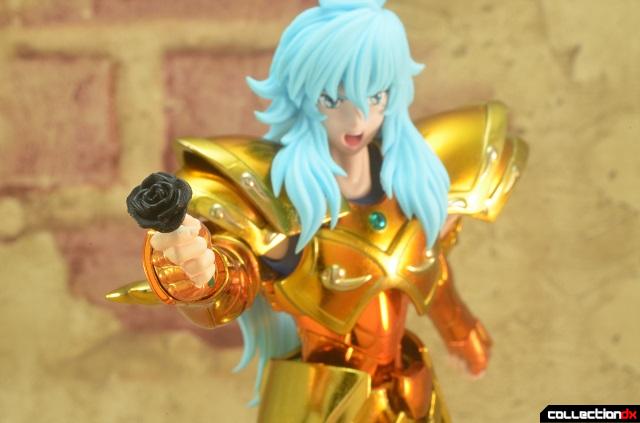 The Bloody Rose, which is a white rose that Aphrodite throws at the opponent’s heart. This rose slowly becomes red as it consumes all of the opponent’s blood. 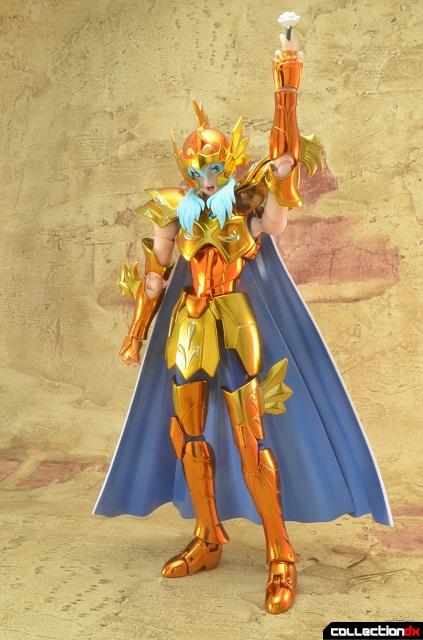 So all in all, this is a solid release in the EX line. However, this is one that I would only recommend to those who really like the character or are looking to complete all of the Gold Saints; chances are if this is you, then you probably already have this. At the end of the day, Pisces is a second rate Gold Saint, so I found it hard to get really excited about this character. Also, while this release does just about everything right, it doesn’t bring anything new to the table that hasn’t been done in the EX line or with the release of this character in the original line.