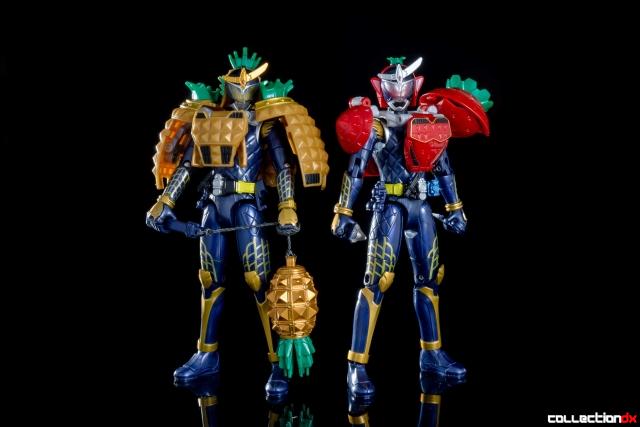 Debuting in early in the series, the Pine and Ichigo Lockseed provide Kamen Rider Gaim with access to both heavy and high speed armors. Since both are alternative armors for Gaim, Bandai saw fit to release both in a set as the fourth entry in the Arms Change line. 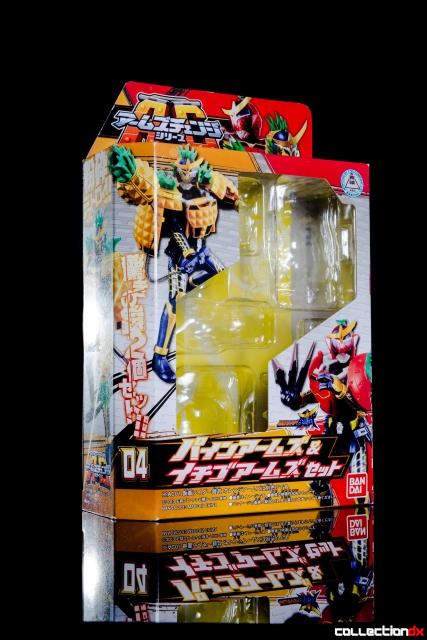 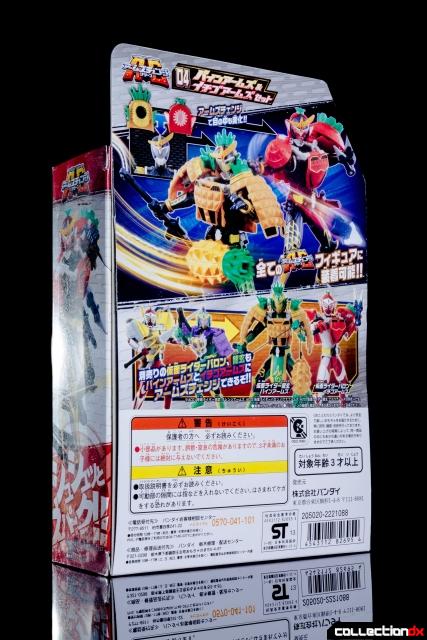 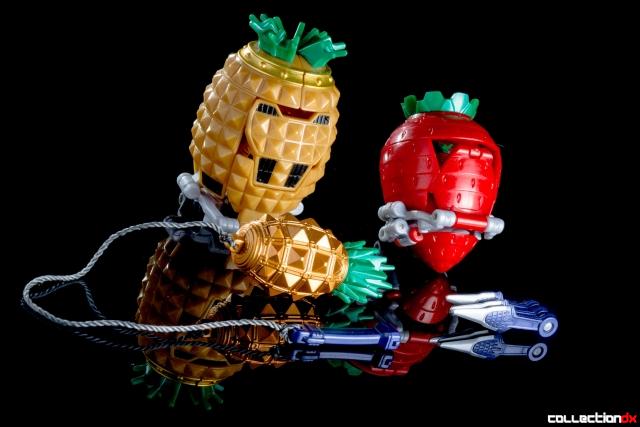 AC04 still comes in the same standard Arms Change box with a front window and bezel. Included in the set is the Pine Arms, Ichigo (strawberry) arms, Pine Iron and Ichigo Kunai. I forgot to take a picture of the helmets, but like all the other fruit armors, each has a unique pattern that shows through the visor of the Beat Rider. No figure is included, though it would have been nice to have some fixed posed bodies to display the armors or something. 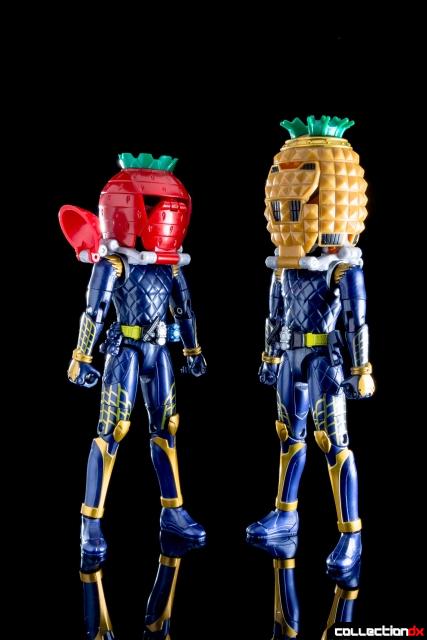 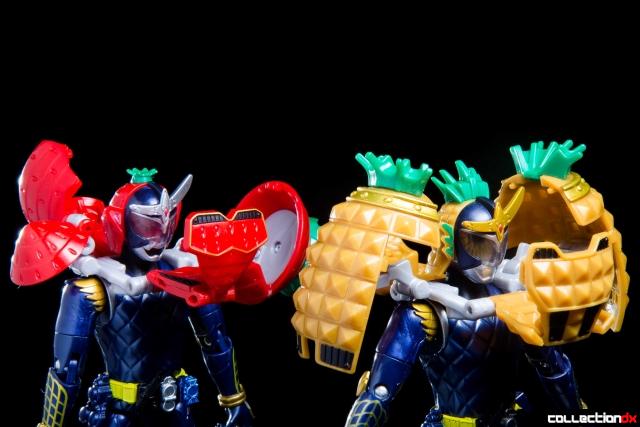 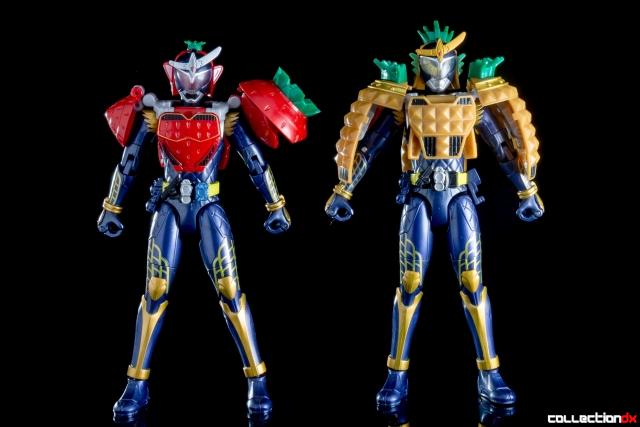 Both the Pine and Ichigo Arms attach to the shoulders like all previous armors. The Ichigo Arms requires opening the bottom of the strawberry first before mounting. The Ichigo Arms is not difficult to transform, but it is a little more complex compared to the others and brings a refreshing change of pace. Fully transformed, the Pine Arms resembles a heavily armored Samurai while the Ichigo Arms gives Gaim a more ninja-like appearance. 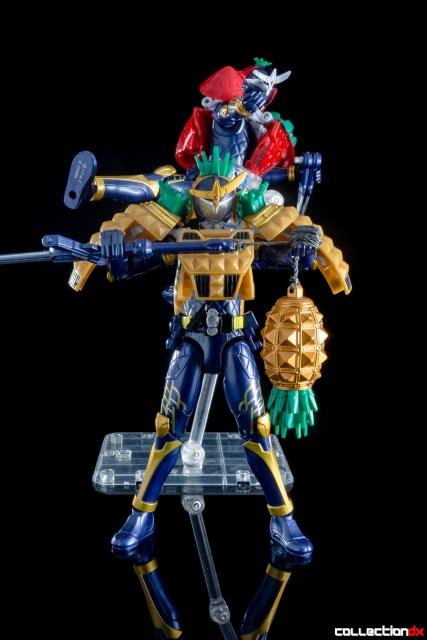 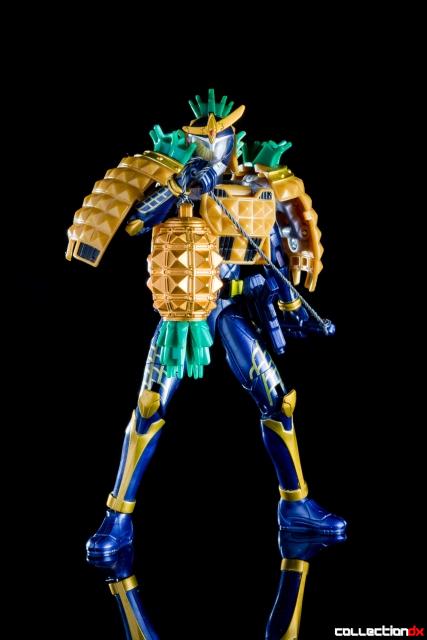 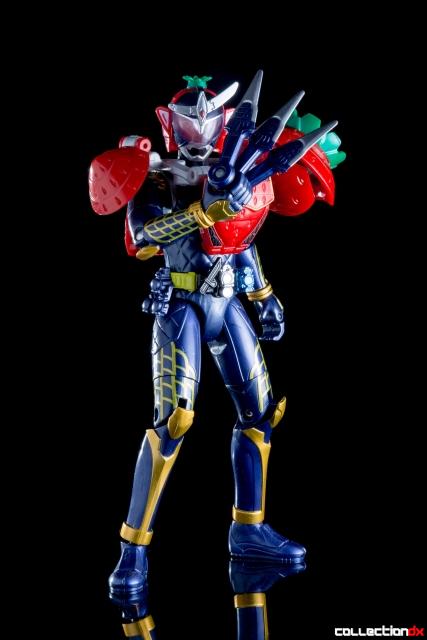 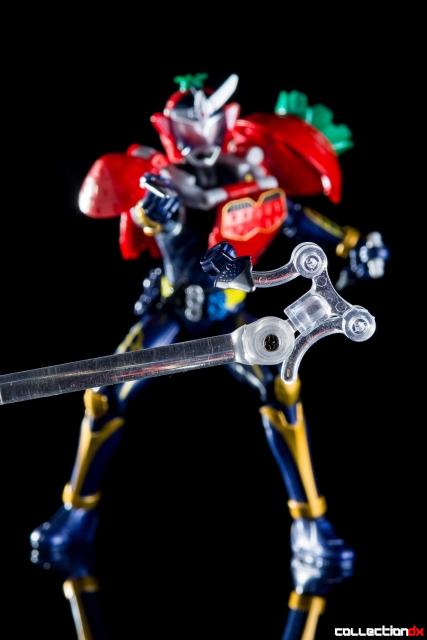 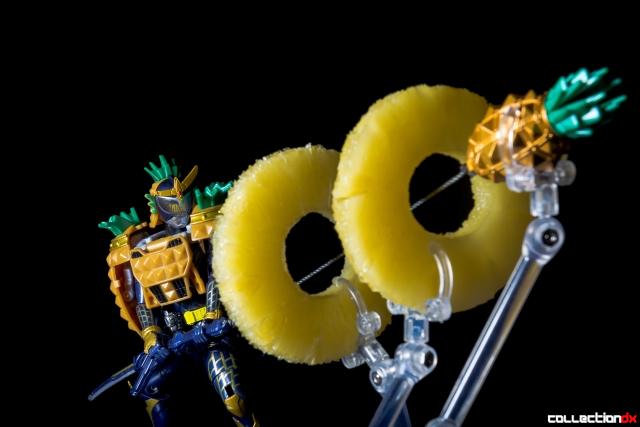 The Pine Iron is a pineapple shaped flail and is capable of combining with Gaim’s Musou Saber to form Kusarigama Mode (chain sickle). It’s a fun weapon and the ‘chain’ is a fairly long piece of string, but it also makes it a bit difficult to put into standard poses without wrapping the string around a hand. On the other hand, the Ichigo Kunai is a set of three strawberry themed throwing knives that can connect together. Gaim can hold them connected or individually and one of the few weapons that the Arms Change figures can hold firmly (I’m looking at you Sonic Arrow and DJ Gun). 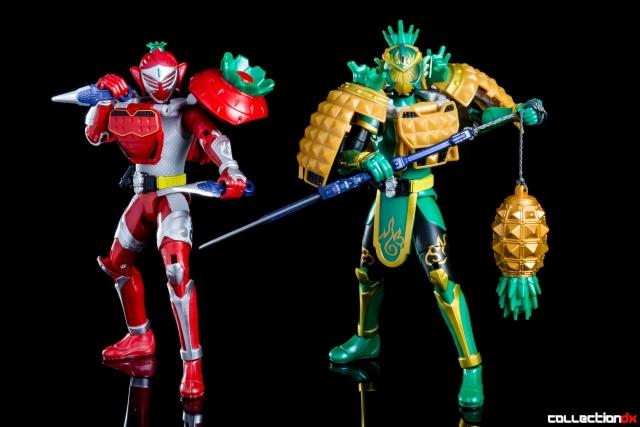 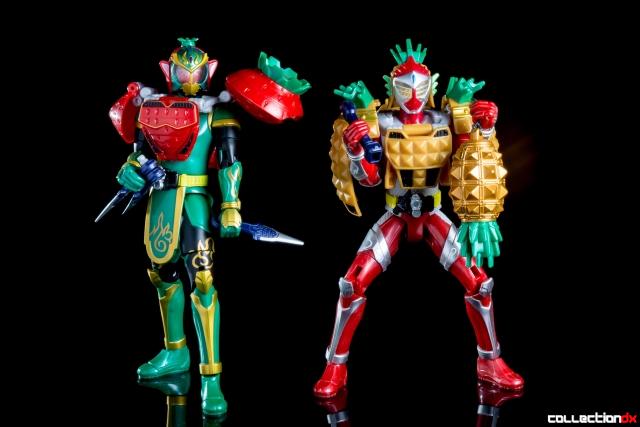 Of course the main gimmick of the Arms Change line is ability to interchange armors between figures. Baron seems to look pretty stupid in any armor that isn’t medieval themed, while Ryugen looks good in Pine Arms with the green complimenting the yellow. It may all come down to personal taste, but at the end of the day, everything looks best on Gaim. 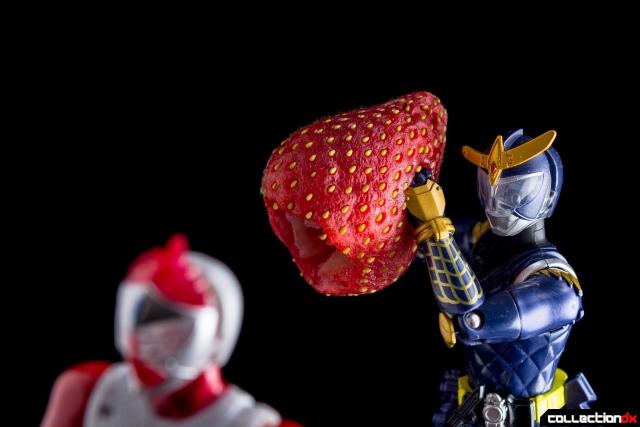 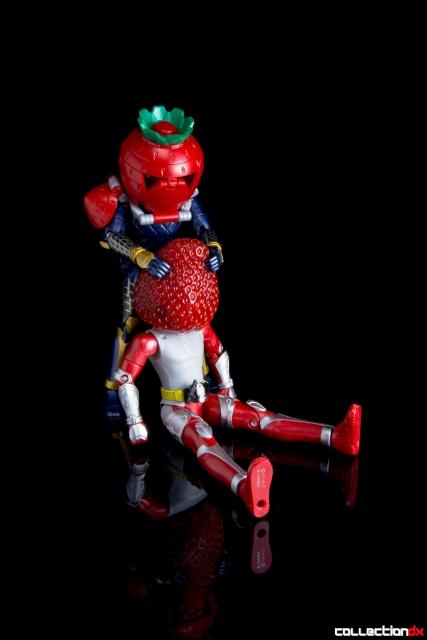 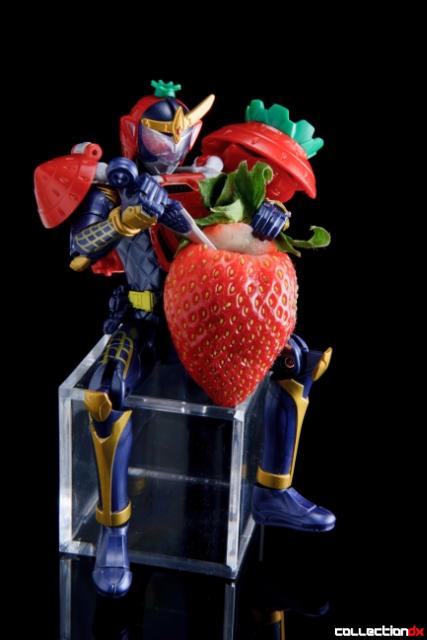 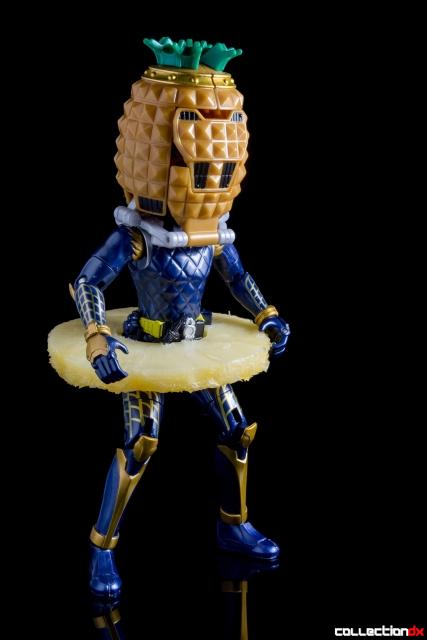 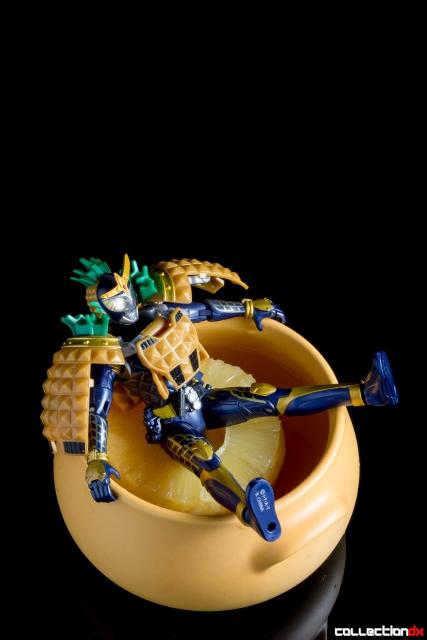 Both Pine and Ichigo Arms are two of my favorite armors in the Arms Change line. The weapons aren’t frustrating to hold like certain later releases in the series and the armors do not restrict articulation like Banana and Budou. Unfortunately AC04 also seems to be one of the hardest sets to find in the series as well. I managed to grab one on Mandarake for close to retail, but the price seems to jump around a lot, with the cheapest one on ebay at 55 dollars.

Of the 9 Arms Change sets I own, AC04 is probably my second favorite after Gaim, making me want to more Gaim pre-Arms figures to display them both. While the Energy Riders and Kachidoki Gaim have been frustrating and made me rethink my commitment to the line, AC04 is still one of the best sets released.

5 comments posted
What is this I don't even

What is this I don't even

This armor is totally bananas.

These photos are next level. Really great work.

Also, I bet you have the only Kamen Rider Arms Change figures that actually smell like their respective fruits.

Thanks for the compliment! I actually do only own the fruit themed riders! Didn't order Bravo though because I didn't want to buy a Durian...