This review sample was provided by Tamashii Blue Fin!

Origami Tobiichi: stalwart student and powerful wizard. Following the death of her parents, Origami joined the AST—Anti Spirit Team—to seek revenge against those who murdered her parents. An unsocial yet reckless girl, Origami lives life and attends the Raizen High School with her friends and AST comrades.

With this, Bandai give us the Origami Tobiichi from the AIC PLUS+ anime entitled Date a Live. Part of Bandai’s AGP (Armor Girl Project) line, Origami’s figure focuses on armoring up and blowing stuff up (at least with one’s imagination for the latter). Moe and mechanical, this figure proves to be an interesting piece.

Packaging:
Origami’s box is rather bland, all things considered; being pure white with a cut out and text, it doesn’t do a lot. It kinda looks like a technical document more than toy packaging. 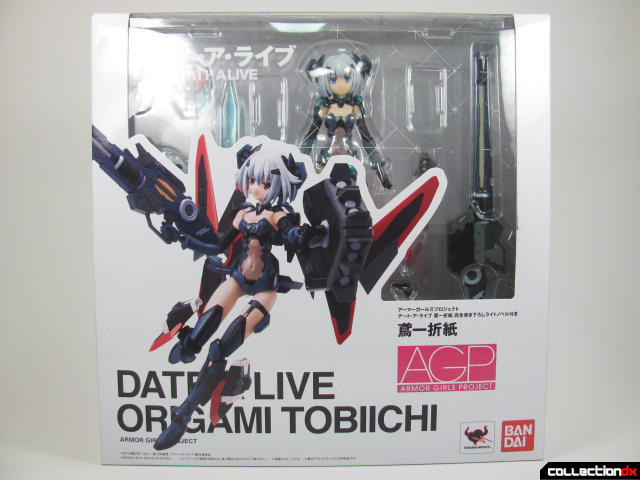 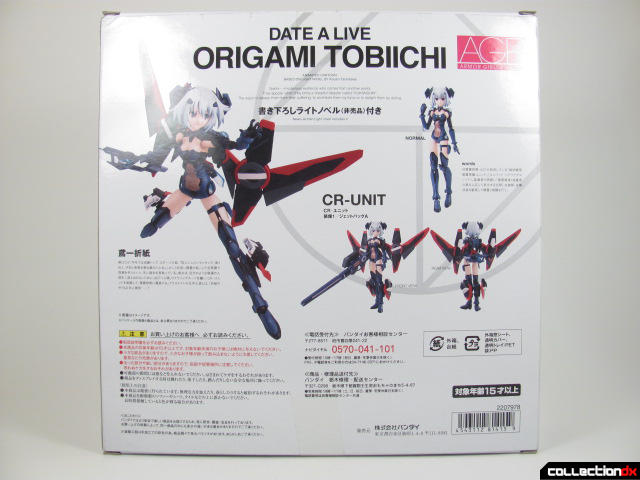 Aesthetics:
Origami is a rather drab figure (but this isn’t a bad thing at all). All her colors are matte and dark which serve well as a stark contrast to her skin and hair; this makes each extreme pop making a visually nice appearance. Her paint apps are very tight and expertly applied; there is no overspray anywhere on this figure (even on the smallest details). 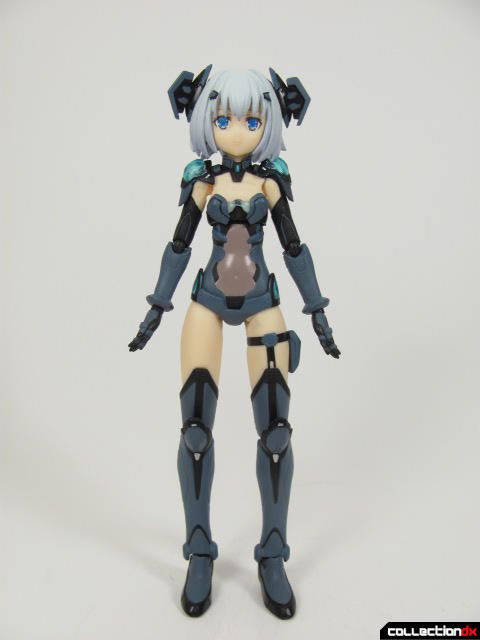 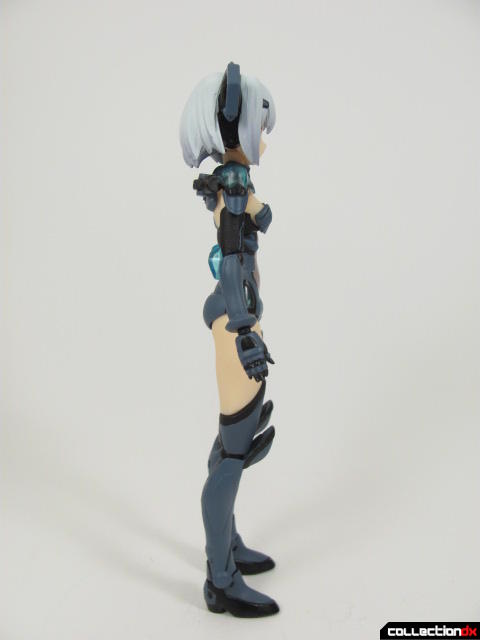 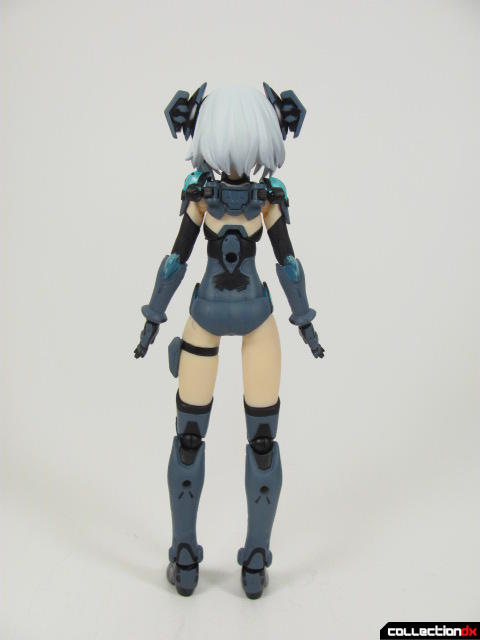 Where there is detail, there is a lot.
Origami’s suit (or lack thereof) is covered with little grooves, armor bits, bumps, and raised details; it looks more like an armor system—like it should—rather than boots, arm length gloves, and a one-piece (like it does). This overall appearance gives weight and coolness factor. 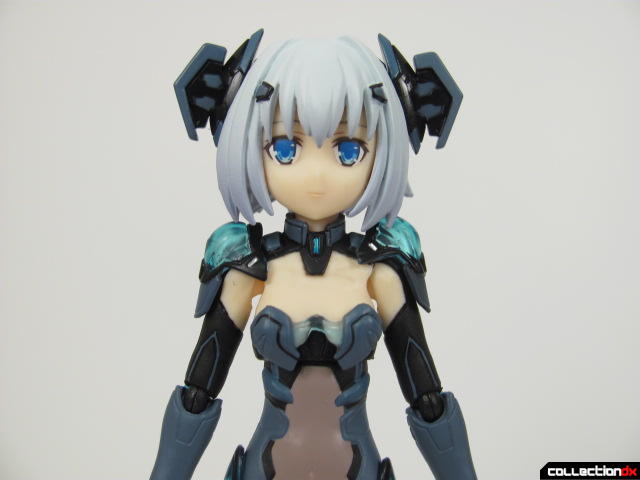 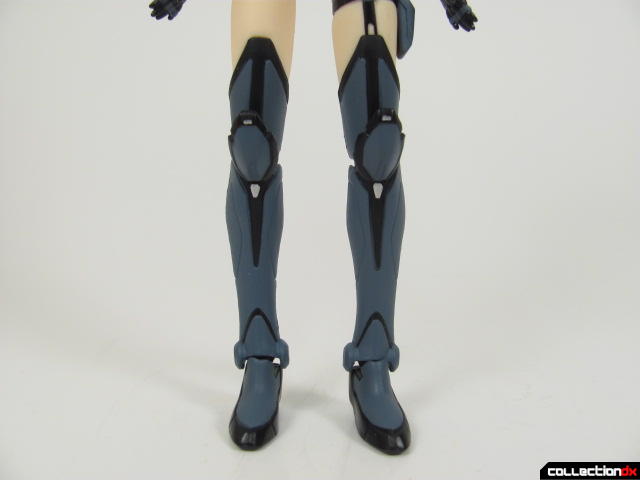 Being such a skin tight design, Origami sports sculpted muscular and bone detail as well, even down to a little belly-button. These features are sculpted well.

Origami also has translucent pieces on her body that look really nice yet not obtrusive against the matte slough of her body suit.

Articulation:
Origami isn’t the best moving toy in the world, but she’s far from being a brick. Suffering from single joints and some (really nice) articulation hampering detail, most of her joints don’t move more than 90 degrees; however, this doesn’t mean that she can’t pull off some really nice and varied poses and hold them well. 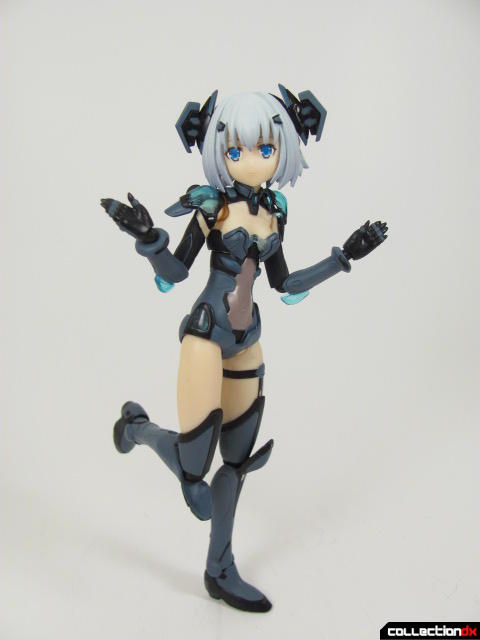 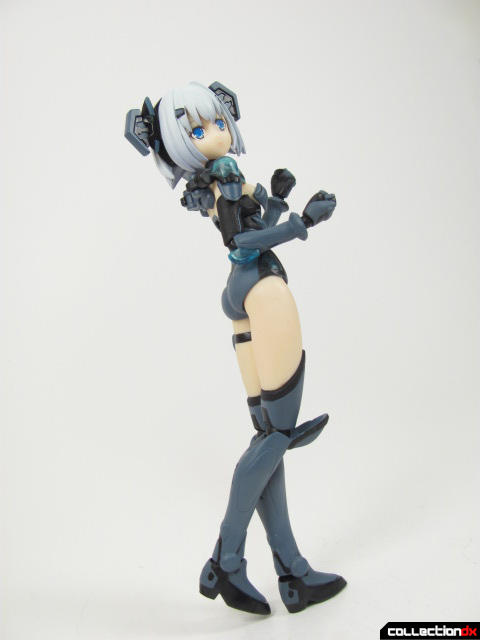 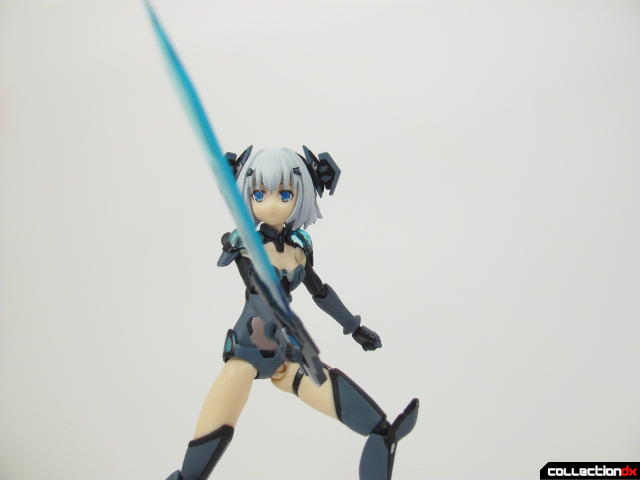 Origami has a double ball-jointed neck that is quite expressive; a ball jointed chest; doubled hinged shoulders and hips; singled jointed elbows and knees; ankle rockers (which are useless due to her sculpted armor); universal wrists; and an articulated butt.
Seriously.
It moves about.
This allows for more natural looking poses (as odd as that sounds) and is quite welcomed. 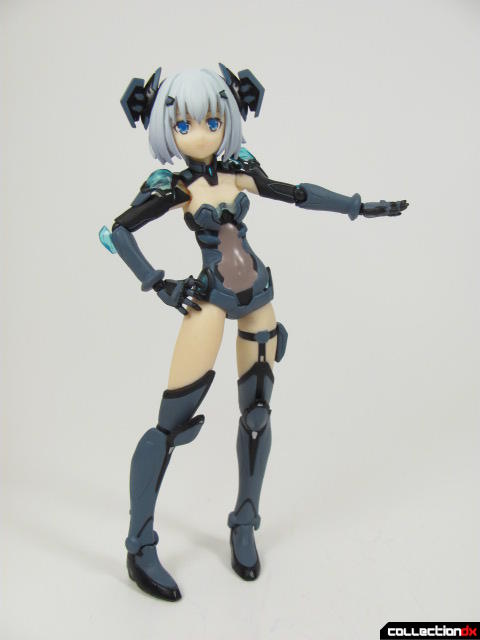 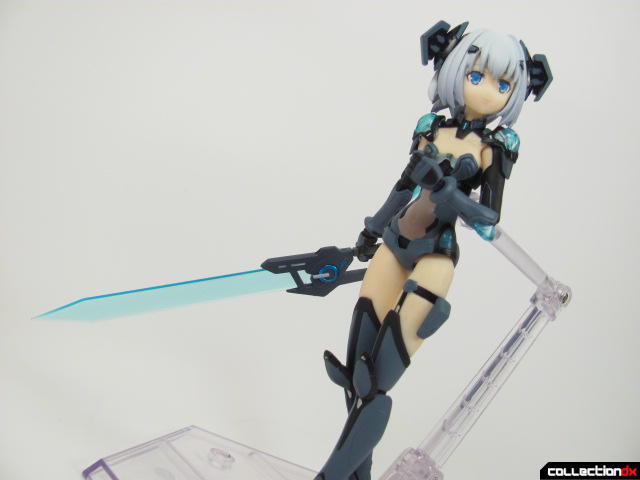 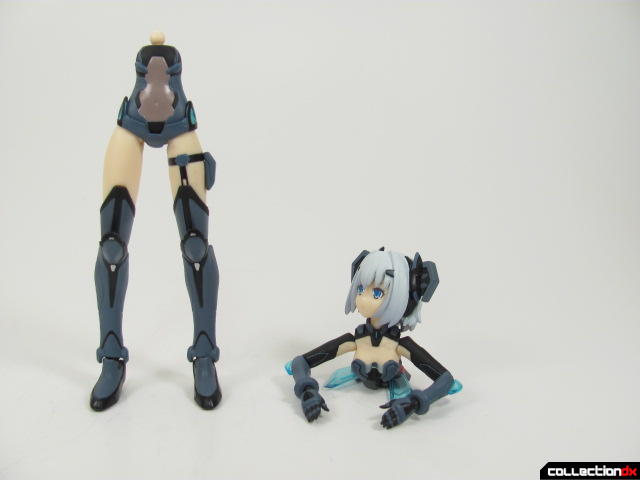 Origami is well articulated and can do a lot of things; it’s just that it could be better.

Origami stands at about 5.5 inches tall. 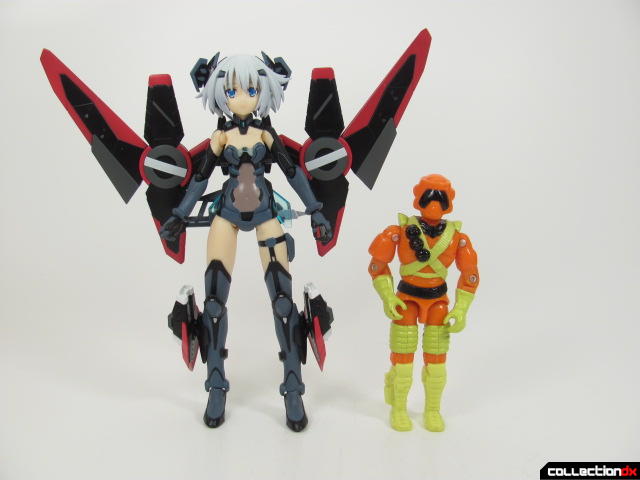 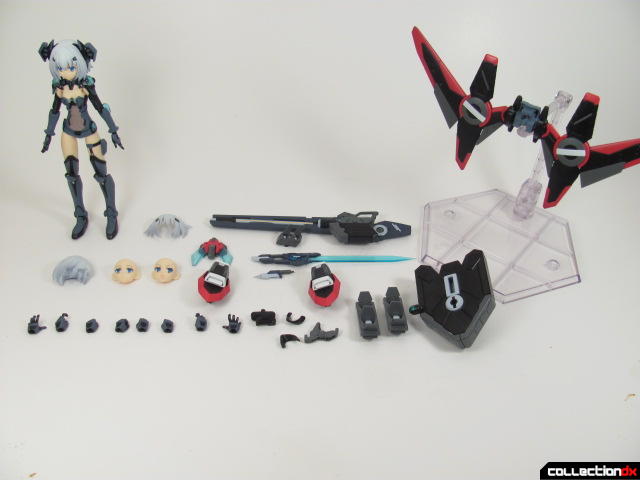 These accessories share the same aesthetic qualities as Origami; they are all well painted and rife with details, both paint wise and sculpt wise. Her hands, hair, and faces are all easily interchanged via the normal procedures. 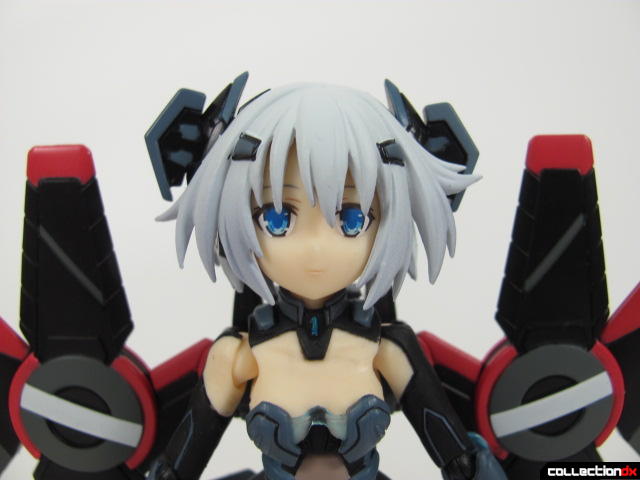 Her other accessories are very light and feel like they are made with some rather subpar plastic (or at least of some different material that what is normal). This isn’t a cost issue, but a weight issue. You’ve got a lithe girl holding huge weapons; if they weighed a lot and you had anything less than Figma joints, then she’d be flopping all over the place. This is completely alleviated by light weapons and accessories. When she uses them, it’s like they aren’t even there (to a degree; her wrists are still kinda weak). 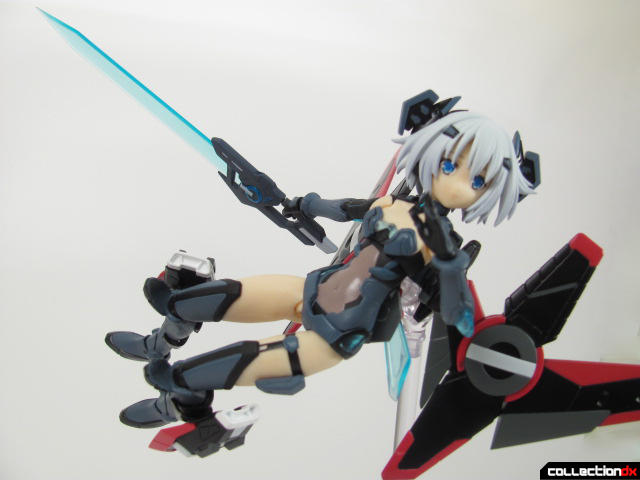 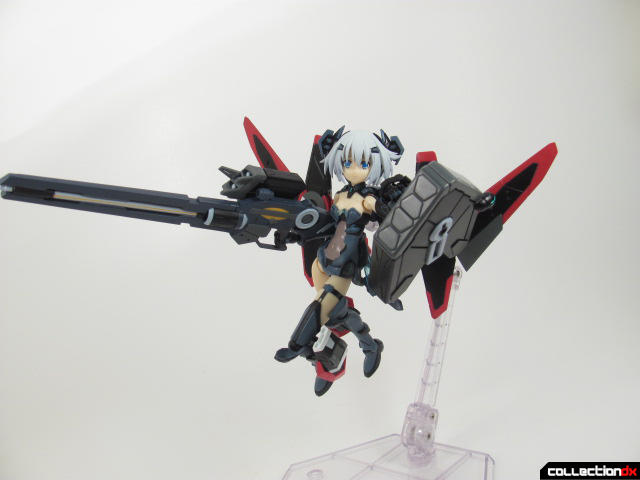 Some of the accessories are—or can be—ambidextrous and also be customized with effect parts. The jet pack includes articulation in the form of hinges and swivels.

Her butt flap armor can also double as weapon storage for both her gun and sword: 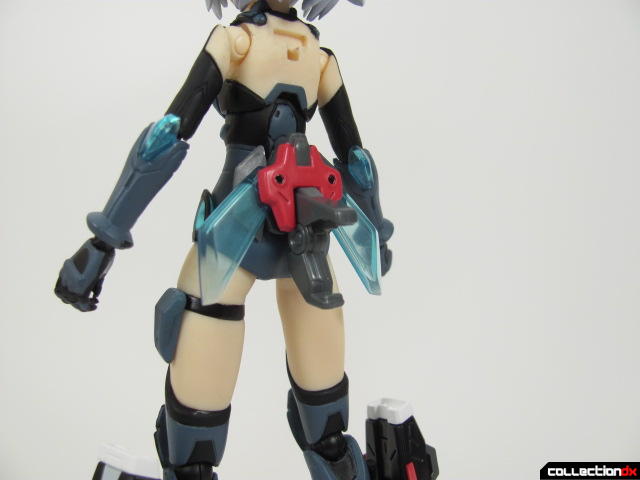 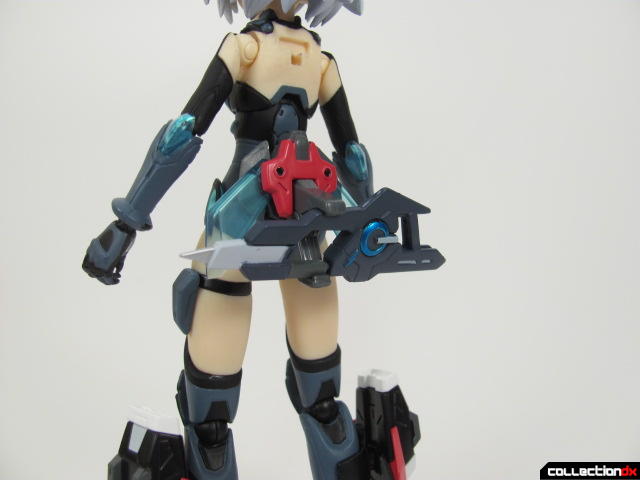 Origami also comes with an original light novel from the creator; I can read a darn thing in it, but it sure is an extra and a cool one at that. 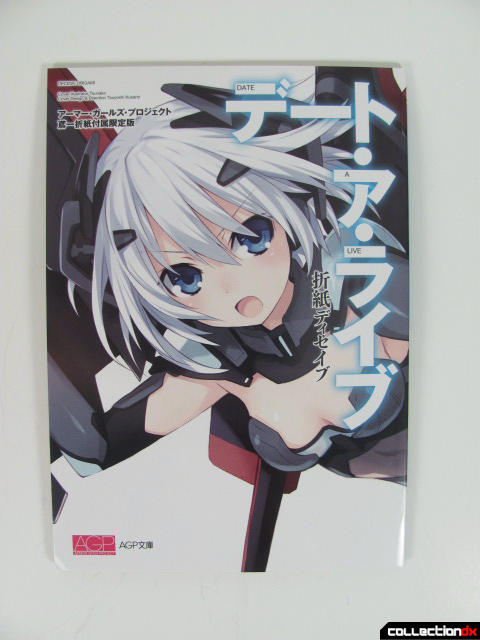 Also, her stand is MAGNIFICENT.
It has a mechanical base joint, wide area, and a great reach.

Gimmicks:
The main gimmick of this line is the ability to armor up the main figure. This gimmick works well enough but it can be rather finicky at times and difficult to execute; instructions are your best friend. The legs boosters are connected with a half inch long clamp which is a right pain to connect, and the jetpack falls out of its hold way too often. However, the end result is nice~ 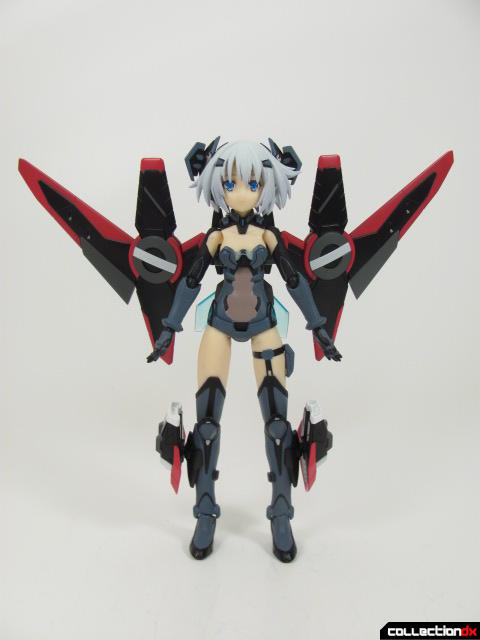 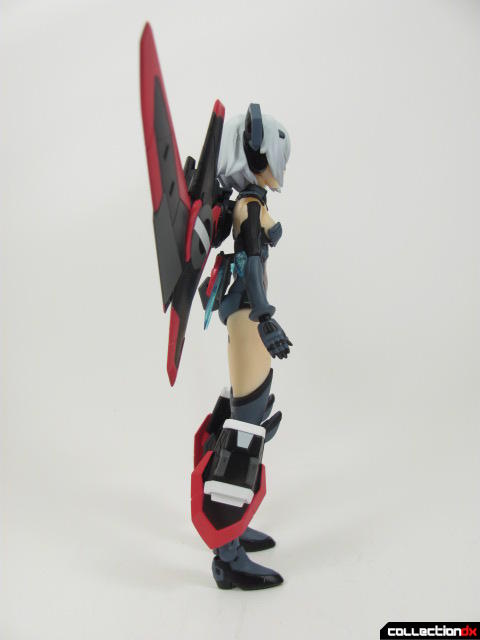 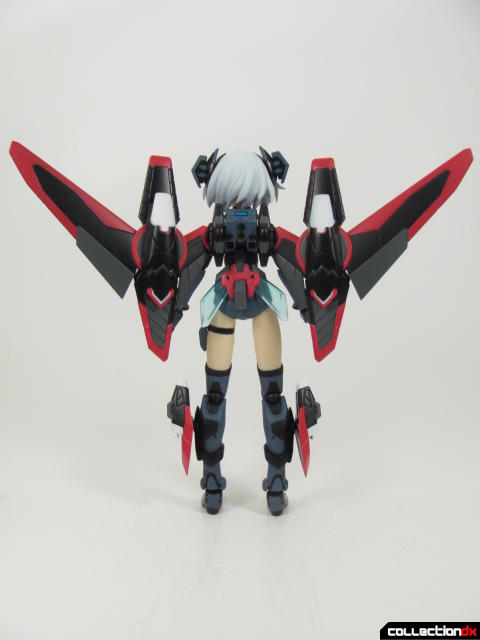 This gimmick transforms the toy from a simple girl to a soaring death harbinger. These additional armor pieces are seamlessly attached and look good on the base figure. The jet pack can get in the way of some more extreme poses, but it can be moved out of the way easily enough. 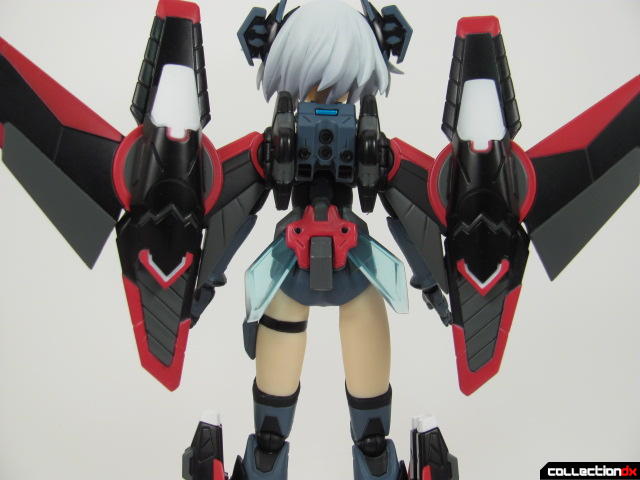 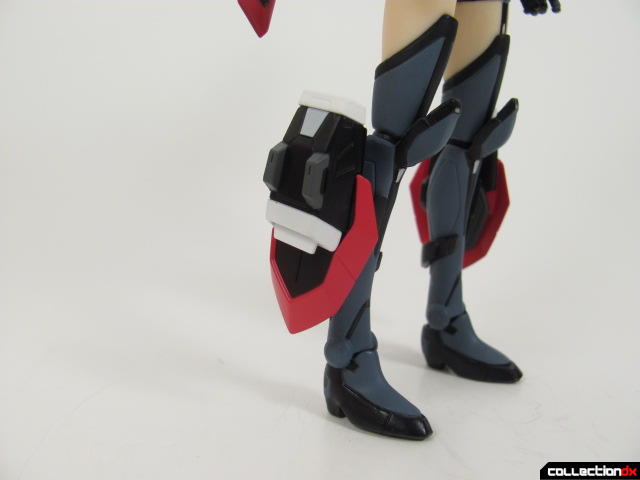 This gimmick added with the accessories makes a very interesting and distinct toy, one that just looks good on your shelf: 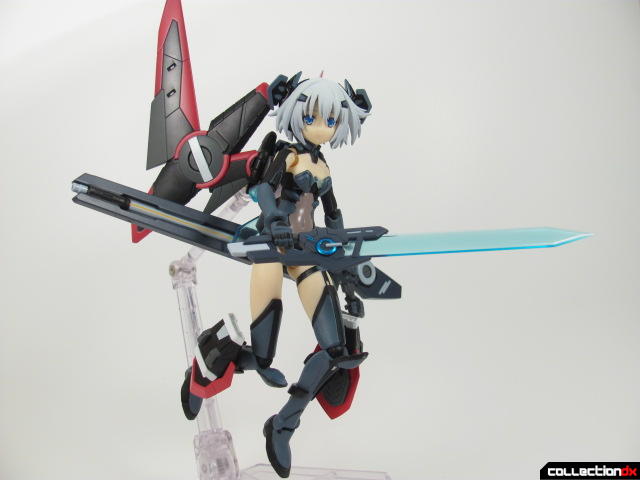 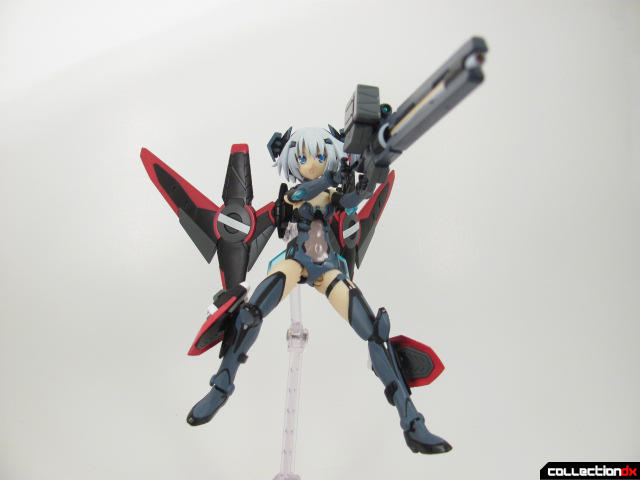 Closing Remarks:
AGP Origami Tobiichi is a cool and interesting figure; it really isn’t like anything else I own. With a cool gimmick, loads of accessories, solid paint and construction, and just being plain cute, Origami is a good toy. Though she suffers from her gimmick being finicky at times, lacking in some pose-ability, and perhaps feeling light to some, this does not make her trying or unplayable. If you’re a fan of the show or of just the idea, I recommend this figure, but make sure this is absolutely something you want; the 7000~ Yen price tag isn’t something to laugh at. If that is in your price range, then I do not believe you will be disappointed. 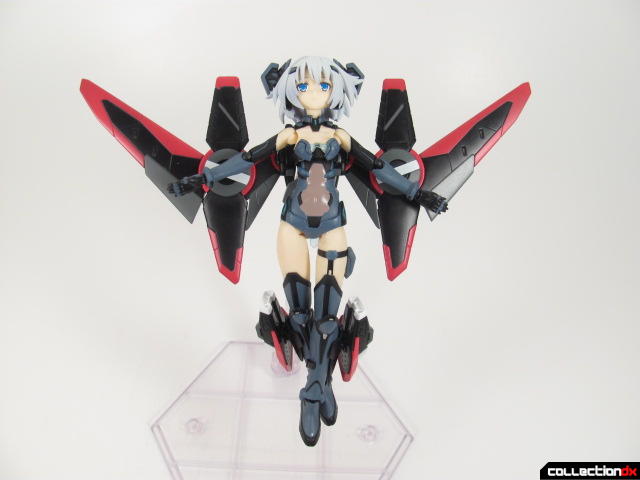 This review sample was provided by Tamashii Blue Fin!