In the mood for some KFC? I'm not talkingin about the Colonel's crispy chicken. I'm talking about Keith's Fantasy Club Micro Robo. Here's a bit of fictional biography:

"Micro Robot was released at the tail end of a canceled Japanese toyline, and largely forgotten in favor of a more popular western iteration with a new colouration.

Despite being a "good-guy" toy, his decades left unsold and unopened in the toy aisles turned him bitter and twisted..."

In case that doesn't make sense, this is based on the Microscope Robo MC20. This robot was part of the Micro Change line released by Takara for the original Microman line before it was canceled. Hasbro picked up this mold and turned it into what we now know as Perceptor. The black coloring has also inspired the character Magnificus and the Shattered Glass Perceptor.

Micro Robo comes in what I can only describe as an adequate box. Points for the satin feel of the box, but points taken away for the blurry photograph and homemade look of the box. 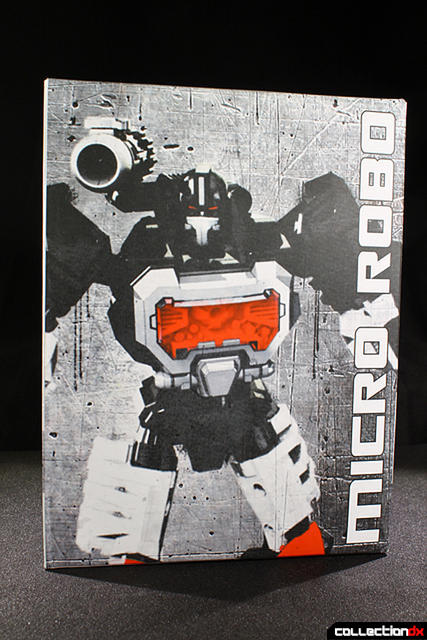 The back gives a little backstory including the fictional biography of this figure. 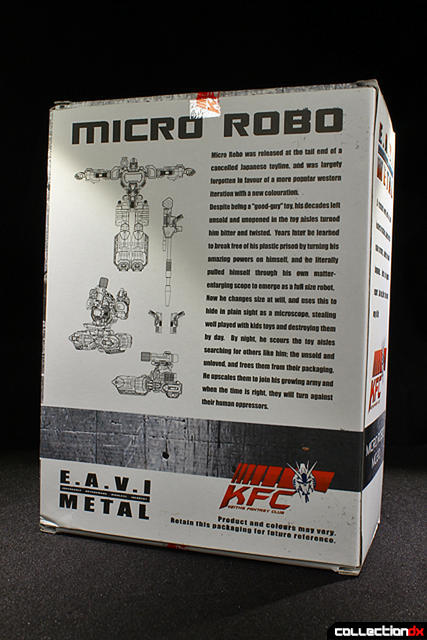 A nice touch is the use of their own branded factory seal. I think the whole sealed thing is way overrated when all it is a a piece of Scotch tape that can be very easily replaced and sold as MISB when it isn't. Having a branded seal make it much more difficult to fake a factory seal. 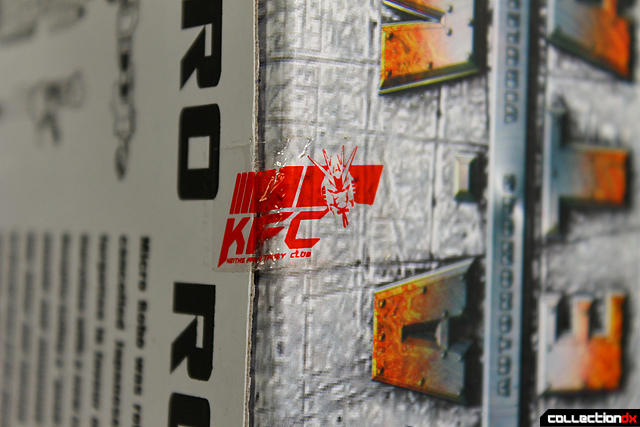 The figure comes in a plastic tray with everything neatly arranged. It comes with weapons and a gold collector coin. Although the plastic tray has empty spots, it's not missing anything. The empty spot is for later releases. 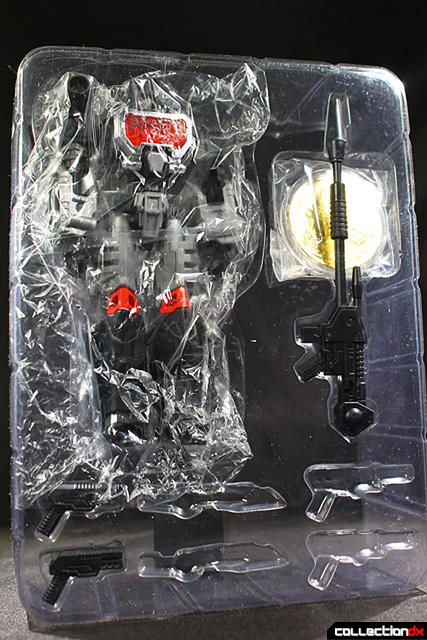 The figure has a nice design. Obviously CAD came into play in it's design. The figure feels well built and joints are firm. There is just something about the feel of the plastic I can't quite put my finger on. The plastics feel very high quality but there is a rawness and machined quality to it that you dont find in mass produced figures. Speaking of which, there is only 1000 of these pieces made. 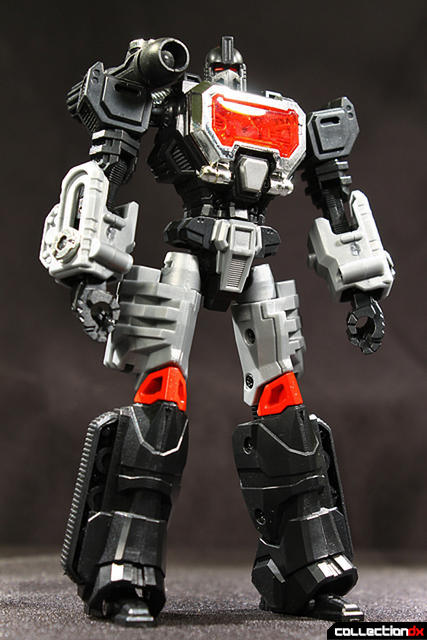 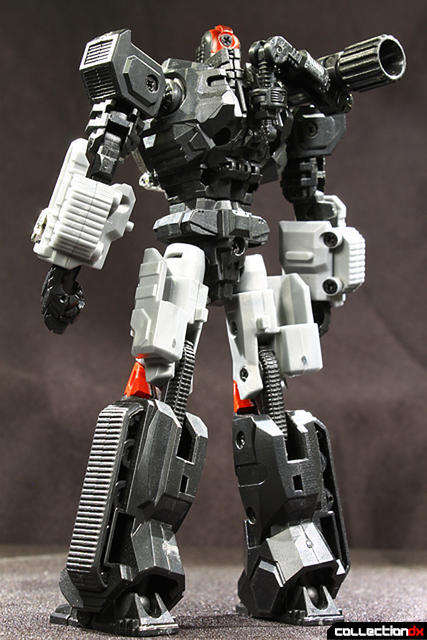 This figure looks good in all the right places. I really do like the head sculpt with it's light piping and the clear red plastic with chrome surrounding used on it chest. Unfortunately, the chrome suffers from the slight roughness of the plastics. 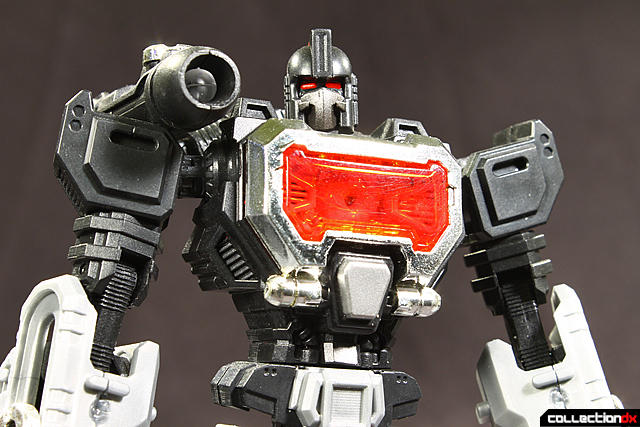 There is a simple but effective set of instructions included to allow you to transform him into one of three modes. 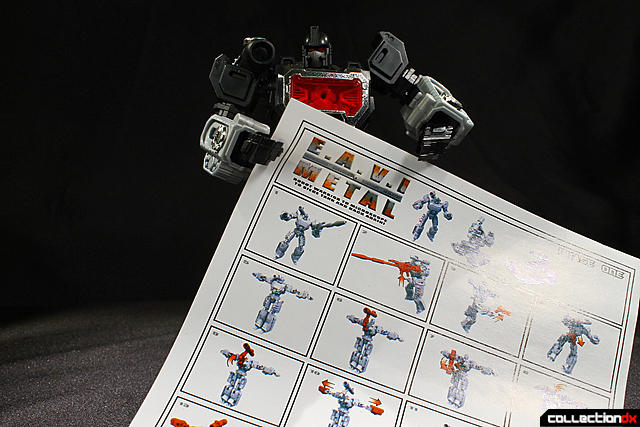 There is also the obligatory Spec Card included in the set. 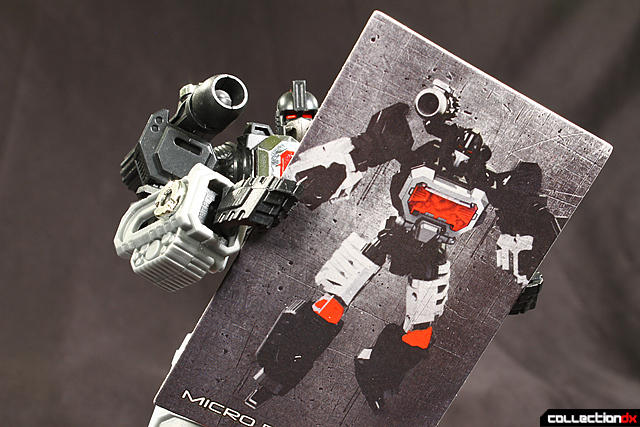 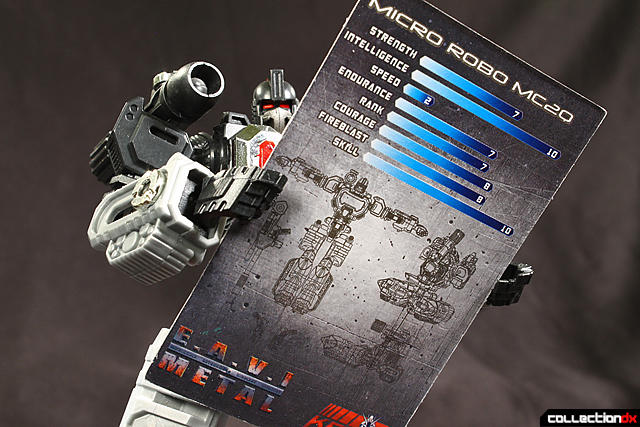 Although I am not a collector of coins, this set includes a really nice gold coin thats about the size of a half dollar. It even comes in a clear plastic case. Looks really nice actually. 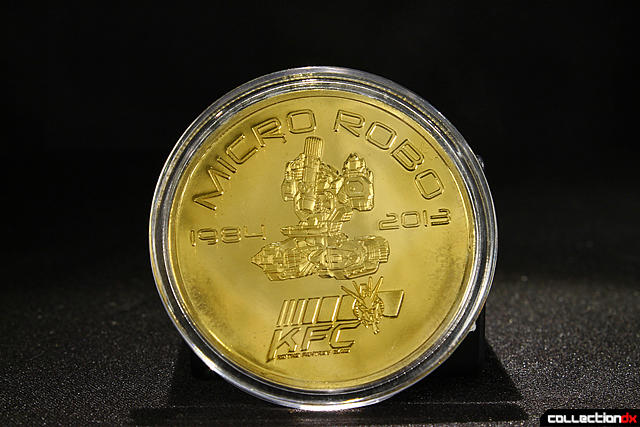 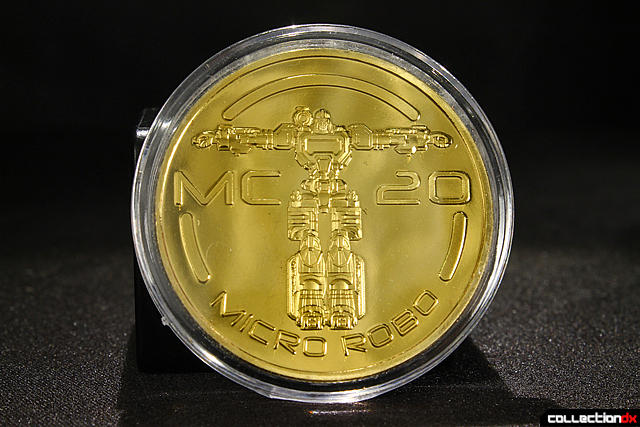 The articulation is very generous. Even the shoulders have a back and forth movement. 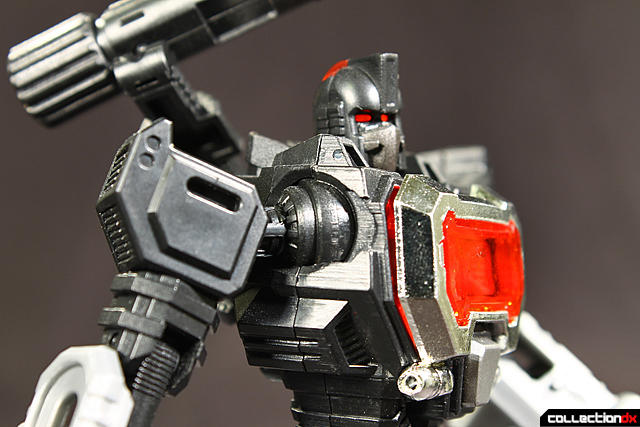 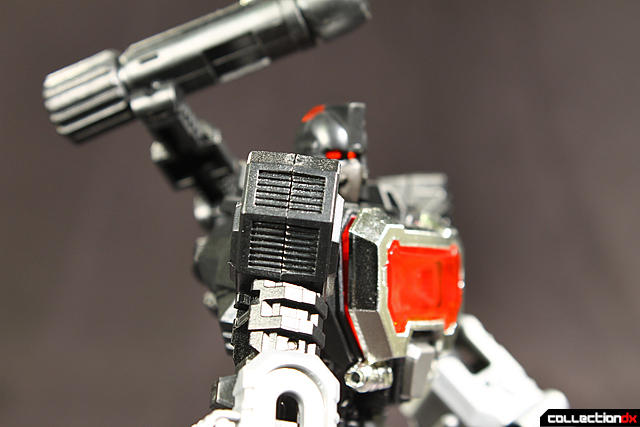 I am not the most inventive when it comes to posing, but you get the idea. 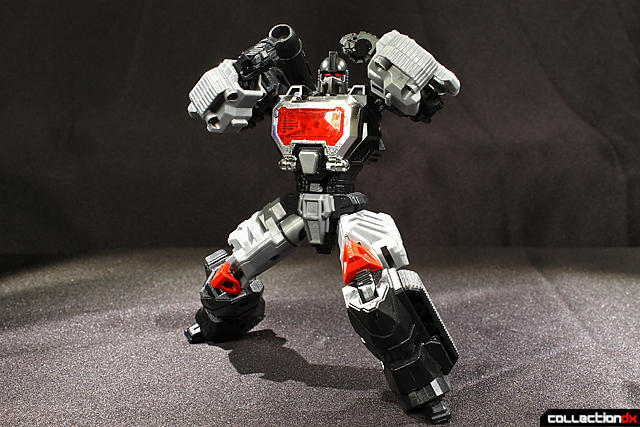 Although the tray suggests otherwise, this specific set only has two guns and a rifle. 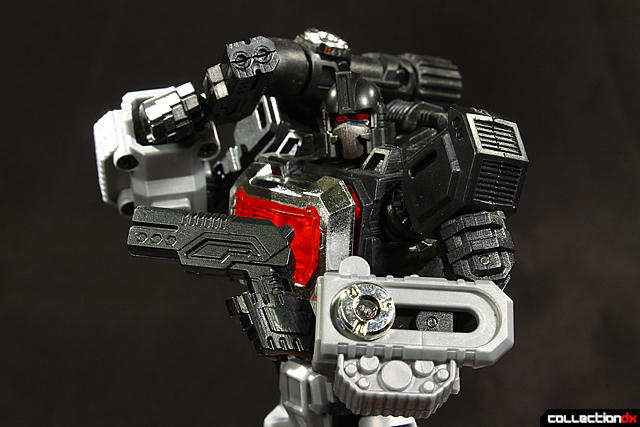 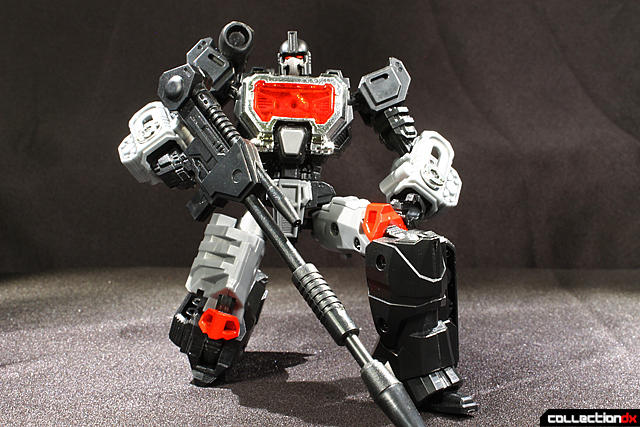 Micro Robo changes in to two other modes. One being the Cyber War Seige Tank which happens to look OK but probably could have been better. I do not mind it too much since anything else would have probably compromised robot mode somewhat. 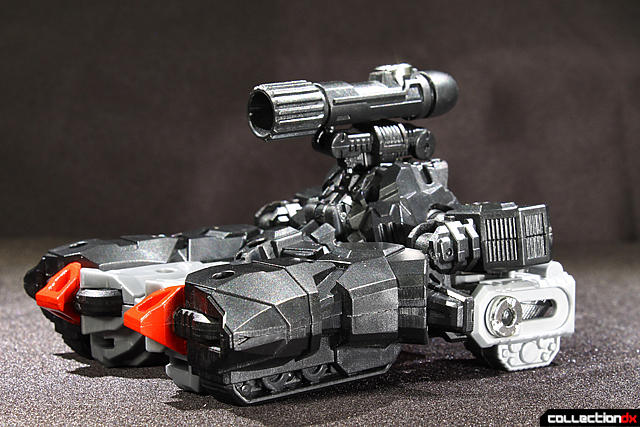 The other mode is the Cyber War Macro Scanner which is his most popular mode and most familiar to G1 fans. 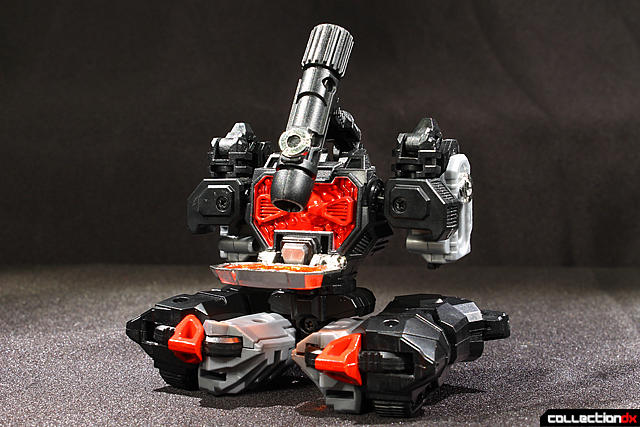 To finish the review, here is Micro Robo with the guy who started it all, The Microscope Robo MC20. 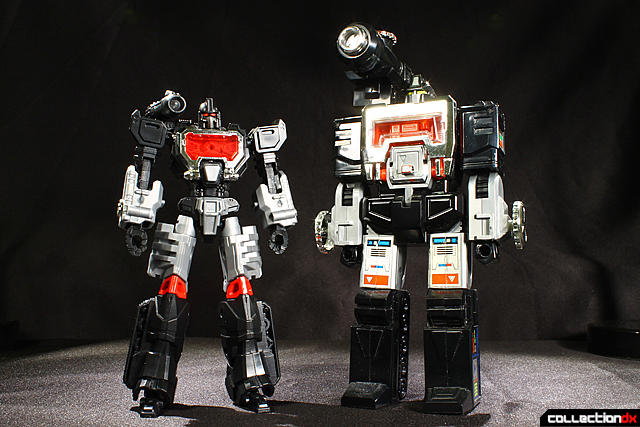 I'm not familiar with Perceptor or the Micro Change original, but I like this toy's design. It reminds me of Galaxy Mega.

Perceptor was actually one of the few Transformers I loved as a kid. I'm not sure why but I did. And while this new figure's design looks pretty cool, I much prefer the classic G1 color scheme. Dang. I kind of want to buy one now.