Once upon a time, Sakura Wars was one of the mighty pillars of Sega’s domestic portfolio, mentioned alongside the likes of Sonic and Phantasy Star. The series spanned 4 installments and multiple sidestories across the Saturn and Dreamcast before Sega’s brightly shining star burnt out, after which it would appear for its last performance on the Playstation 2 and the Wii, which also happened to be the only game that saw an English release.

The games were heavily promoted by Sega. They even did commercials featuring the Sega Saturn's spokesperson, Segata Sanshiro, who some may recognize as the actor who played the original Kamen Rider!

The characters from Sakura Wars crop up in strange places every now and then, but there hasn’t been a numbered installment in the series since 2007, and can be considered effectively shelved for now. The current state of the franchise consists of a free to play browser game and a manga in which the robots have been dropped in favor of hunky guys.

The games mostly take place in an alternate history Taisho era Japan, where everything is steam-powered and the biggest threat to national safety comes from demons and other weirdos. Various armored suits have been developed to fight this threat, but require a large amount of spiritual energy to operate. In the game’s fiction, this naturally means that young women tend to make the most adept pilots, but gender is not actually a prerequisite. I was planning on writing a longer summary on the plot but honestly Wikipedia does a pretty good job if you want more details.

The Koubu is the venerable suit used throughout the series, appearing as the starting unit for the majority of the games. Each sequel introduces a new iteration of Koubu, but the basic shape remains the same.

Megahouse brings us their take on the Koubu as part of their Variable Action line, depicting it as it appears in Sakura Taisen: Atsuki Chishio ni, the PS2 remake of the first game. This trademark pink suit belongs the main heroine of the series, Sakura Shinguji. They’ve announced plans for the entire Flower Division lineup, and I hope this branches into the suits from the other games (or better yet, the upgrade suits). However, I’ll come right out and say it. This isn’t a great toy, and I’m not sure if my investment in the series is the only thing preventing me from being a lot more disappointed. Before I start complaining though, let’s talk about what the toy does right. 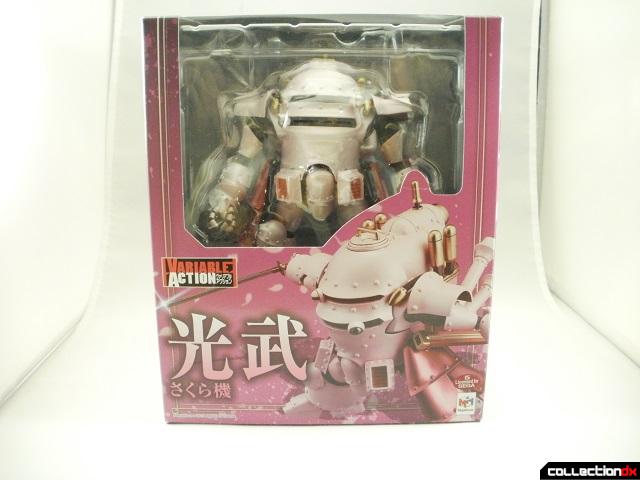 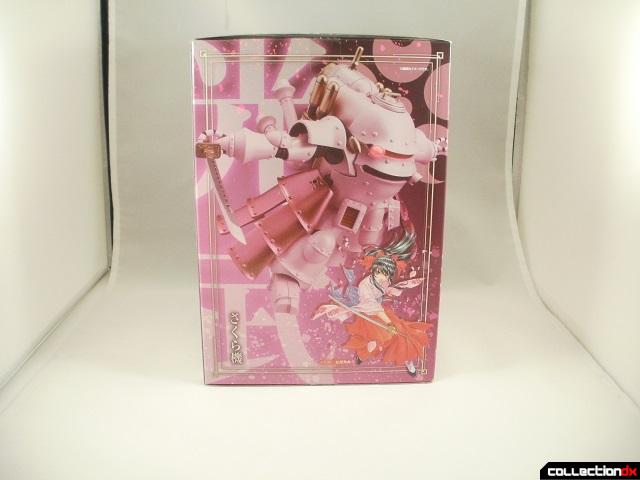 There aren’t a whole lot of Koubu toys that have been made, but this is far and away the most poseable of the bunch. The elbows are double jointed, and a pop-out extension combined with a swivel joint in the shoulders gives the arms an impressive range of movement. The forearms and biceps rotate as well. The knees are detented and double jointed which give the ankles slightly over a 90° range of movement, and the feet have another pop out extension which help out with dramatic stances. 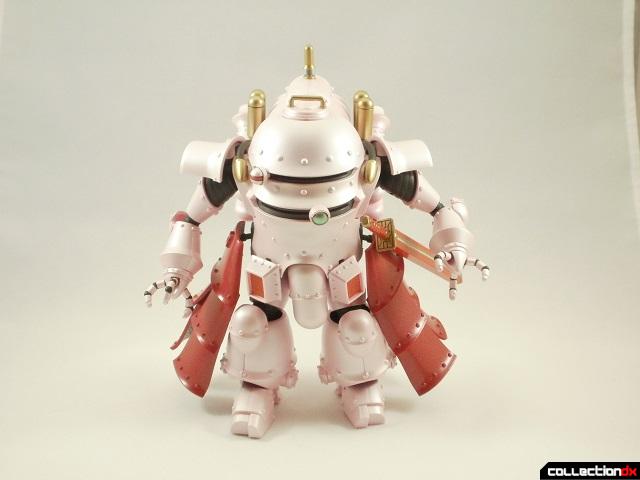 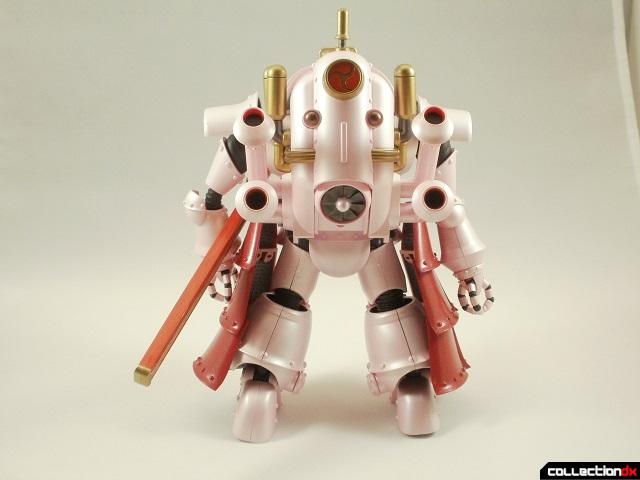 The paint job is gorgeous. The base color is a pearlescent metallic pink, and all of the smaller applications are perfectly applied. 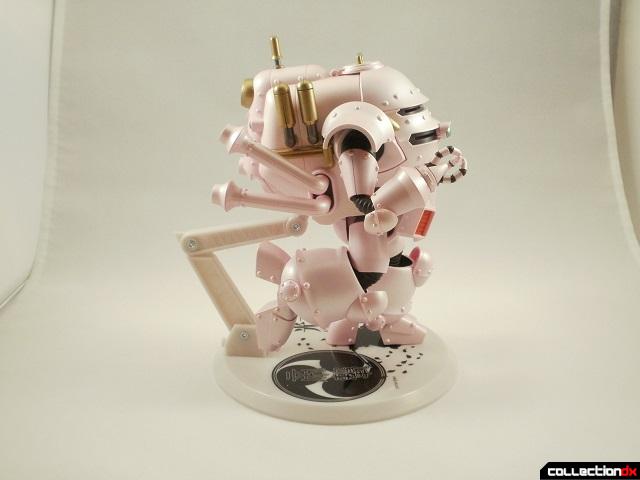 Accessories are minimal, consisting of a sword (with removable blade), sheath, and a hand that is permanently attached to another sword hilt for more secure sword fighting action. 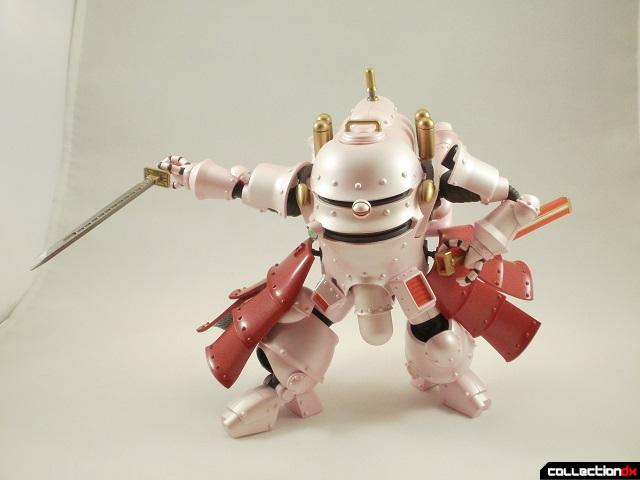 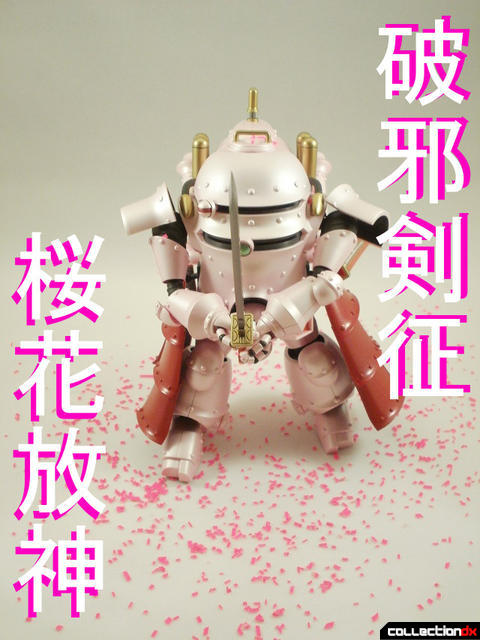 There’s also a base, which is really nice, although I found it’s not really necessary for most standing poses. It features the logo of the Imperial Assault Force and the Koubu name, and has a slight metallic sheen to it similar to the Koubu itself. 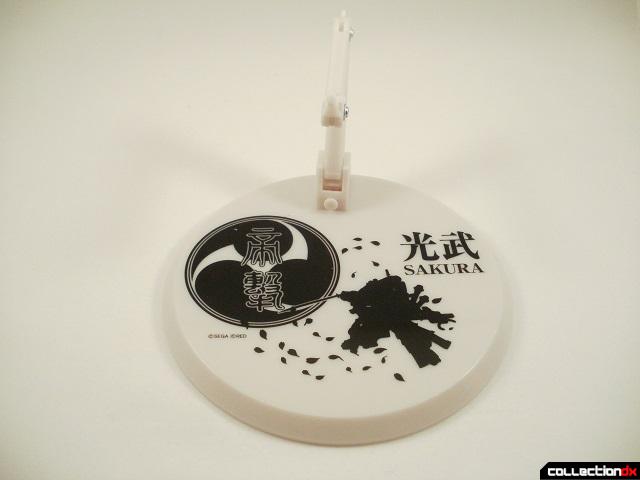 There’s an opening cockpit gimmick that does, well, what it’s supposed to. You lift up the top hatch, and the front half of the Koubu slides forward and down. It’s nothing really spectacular, and after seeing how the inside is laid out I quickly gave up hopes about the chance of Megahouse releasing pilot torsos. At any rate, it performs as advertised. 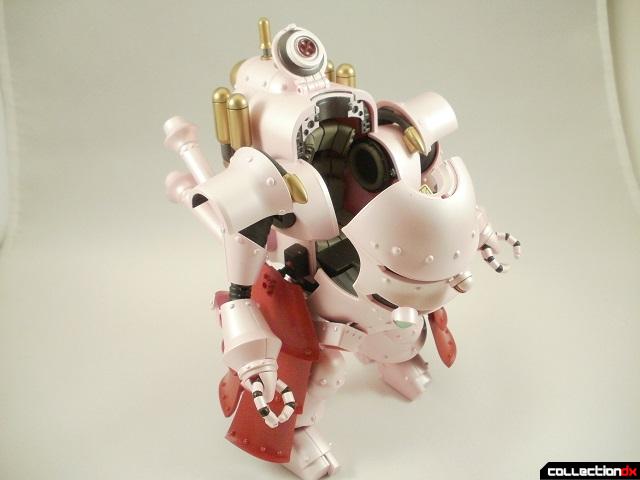 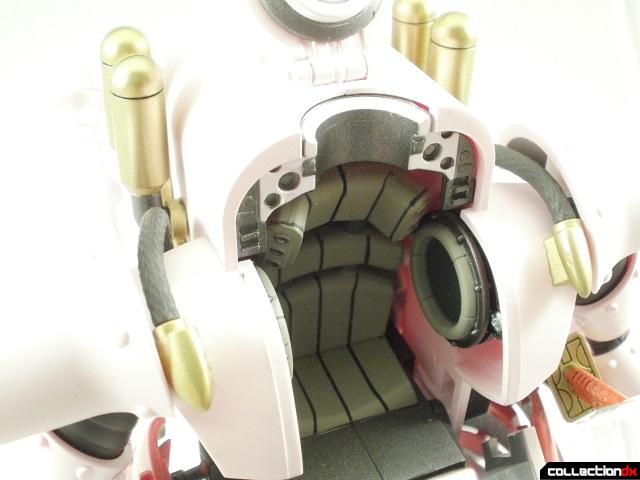 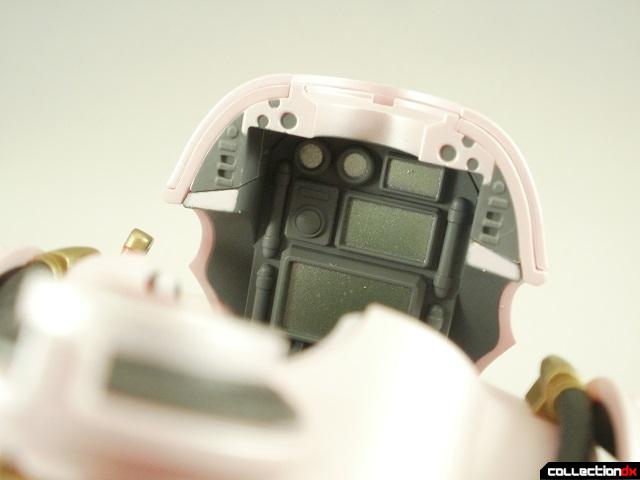 While this might not be a feature, the skirt armor can easily be shortened by removing segments, or taken off completely for those that prefer the look of the original games. 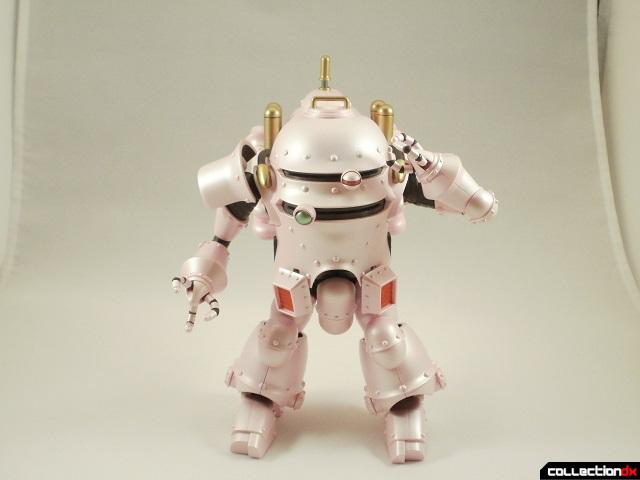 The first thing you notice when you pick up the Koubu is that it’s light. Since this is a very back heavy design this is somewhat expected, but more problematically, a lot of it just feels very fragile. The hands feel like they might break apart without any warning. This feeling wasn’t helped by the fact that the paint on the wrist peg the hands attach to had been wet when the hands were put on, and freeing them was a long and nerve-wracking process. On the sword holding hand, the hand looks to only be attached to the hilt by a small area of super glue. Getting the blade into the empty hilt is a tight fit, which
doesn’t make me confident about how long it’ll last before breaking off.

There are also a lot of questionable construction issues. From the press photos one noticeable issue were the large gaps in the armor pieces on the arms and legs. This was not fixed for the retail release. In fact, on close inspection, there are several areas that appear to have been slightly misaligned when they were glued. One of the golden cylinders on the ‘backpack’ was loose out of the box, and will have to be glued in place eventually.

That beautiful paint job? It scratches very easily. Out of the box, there were already some areas where there was chipping where plastic comes in contact with other plastic. There’s nothing super large or noticeable, but the longer you spend examining it, the more tiny chips you’ll find.

Almost everything on this toy is made of hard ABS plastic, with the only exception being the fingers (those hoping for squishy hoses need not apply). Even the ball joints are plastic on plastic, and some of them are quickly getting loose. One of the hip skirts is the biggest offender, and while this isn’t a particularly hard fix, being a simple ball joint, I’m worried about the long term friction of joints like the shoulders, which don’t appear to be possible to disassemble.

Finally, the Koubu can’t put its legs together. The width of the crotch armor prevents this, and results in a slight ‘A’ stance. A pop-out joint for the hips would have easily fixed this, but on further reflection, maybe it’s for the best that the legs can’t touch, considering the paint issues.

At a retail price of 7200 yen, I really can’t recommend this. AmiAmi has it for just under 6000, but once you factor in shipping it’s still asking a lot. For me however, this scratches a very specific itch, and I’ll continue to pick up at least a couple more of the releases from this line. I just hope Megahouse fixes some of the problems. 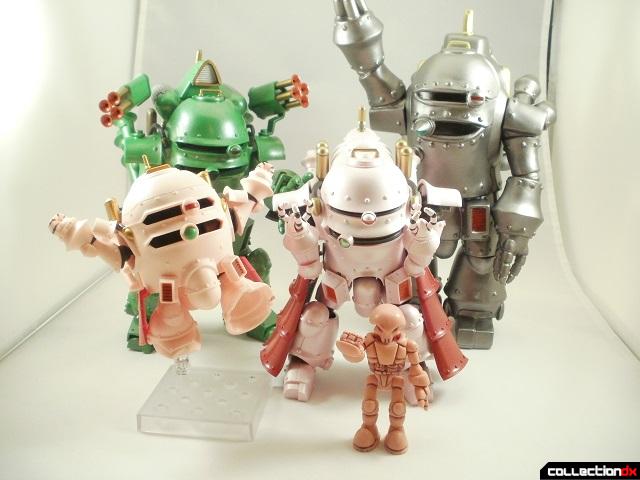