Senki Zesshou Symphogear was one of the surprising hits of its season. As a completely new property in the ever expanding "magical girls who fight like giant robots" genre, the show garnered many fans with its peppy characters, awesome fight scenes, and a boundless enthusiasm that mirrored that of its main character, Tachibana Hibiki. As every good headstrong idiot needs a stoic partner, Hibiki is joined by veteran warrior Kazanari Tsubasa who uses her striking blue and white Symphogear armor to help save the world from the mysterious creatures simply called "Noise." 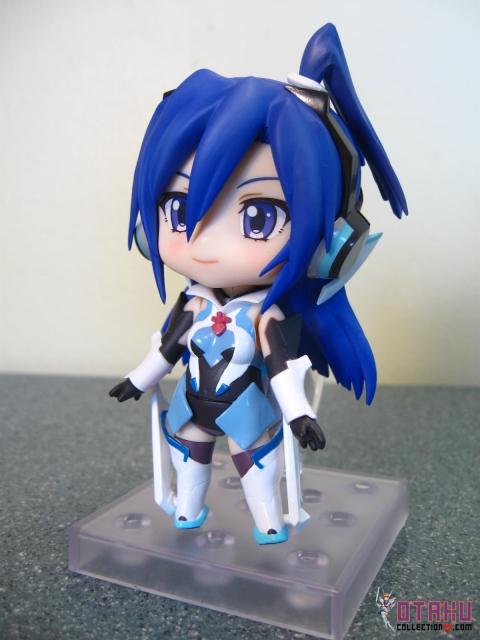 Kazanari Tsubasa is my first full-sized Nendoroid figure so I was pretty excited to do this review. The chibi-fied Tsubasa is a perfectly petite version of the character in her Symphogear armor. There's even a small version of the "Relic" she wears around her neck, which is what allows her to transform into this form by singing. The figure stands roughly four inches tall is made almost entirely out of PVC plastic. Tsubasa is quite sharply molded with numerous parts being pointy enough to draw blood. Good Smile Company has been on an unstoppable roll with the Nendoroid line as Tsubasa herself is the 278th entry! 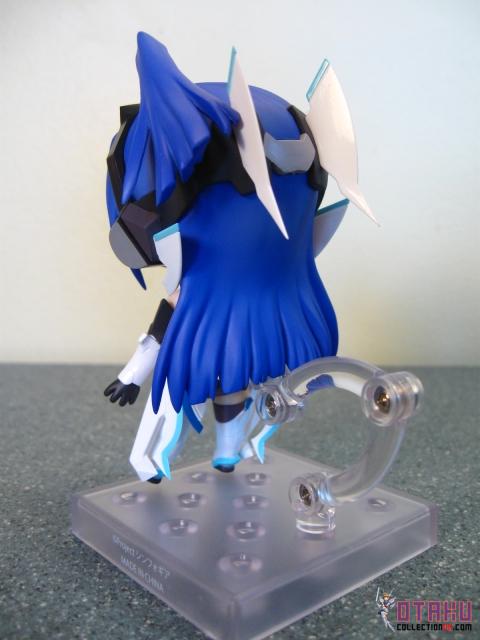 Due to the fine molding on various parts, I am wary when handling the figure as to no damage any of the fine points like the ends of Tsubasa bladed hair bow. Also note that the little side ponytail is mounted with a ball-joint and thus has a little bit of articulation. Like all Nendoroids, Tsubasa needs a stand to remain upright. The armature has a fairly wide range of motion which allows Tsubasa to pose in a manner similar to a regular action figure. 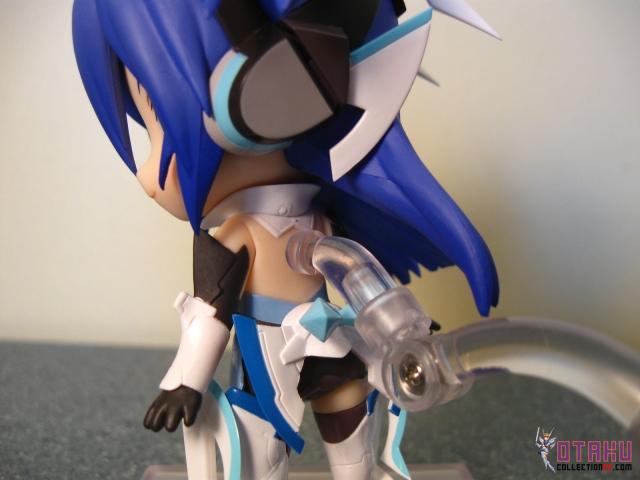 One thing I do find irksome is the weak connection point between the display base and Tsubasa's back. The end of the arm clips softly into a hexagonal shaped hole in her and tends to pop out during handling. Definitely pose Tsubasa first before reattaching her to the stand. The headphones on her armor help drive home how a Symphogear user has some real music powered might!  Sadly on my figure the two halves of Tsubasa's hair do not come together snugly and leave a tiny gap in the headphones. 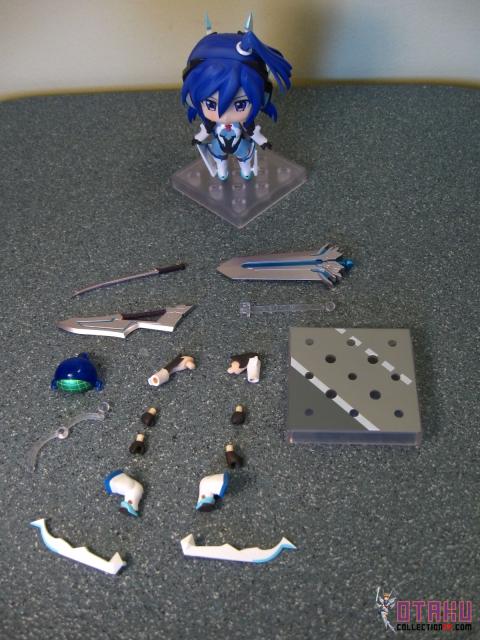 Accessories wise Tsubasa comes with a good selection of character specific bits and two pairs of optional arms and legs. I was surprised to see she even comes with tiny pea-sized optional hands! You get two fists and two weapon holding hands to go along with the splayed hands already installed on the default arms. The extra legs with bent knees also come with the outstretched leg blades installed but they can be swapped out with the retracted pair on the straight legs. The extra display base with a painted on roadway comes in a black plastic bag packaged outside of the plastic tray everything else comes in. You get three swords (one with its own clear stand) and a small Noise which also has a stand. 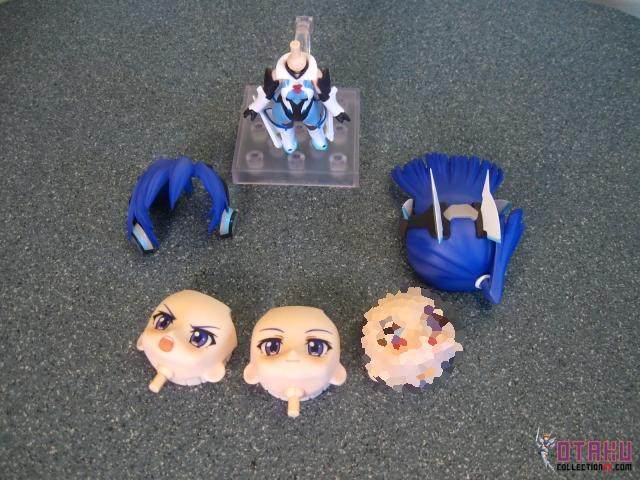 Like every good Nendoroid, Tsubasa comes with several alternate faces. All three faces are expertly done with tampographed eyes and perfectly painted mouths. The first one is the pleasant smiling face you saw before, the second is a stern war face, and the third is a surprise... doh ho hoooooo~

To change out a head simply pry open the front and rear halves of Tsubasa's hair and change out the head. Sometimes the neck joint will remain in the head so just pry that out after. 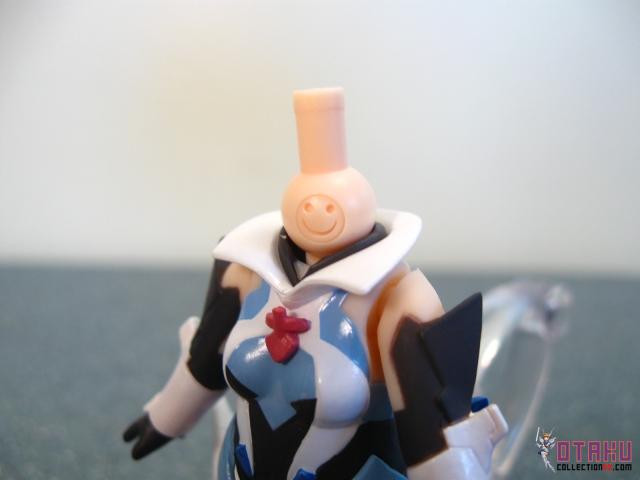 One thing that is endearing (and slightly disturbing) about Nendoroids is how all the standardized universal joints they use have a little smiley face on them. That way each one can always have a "Good Smile!" 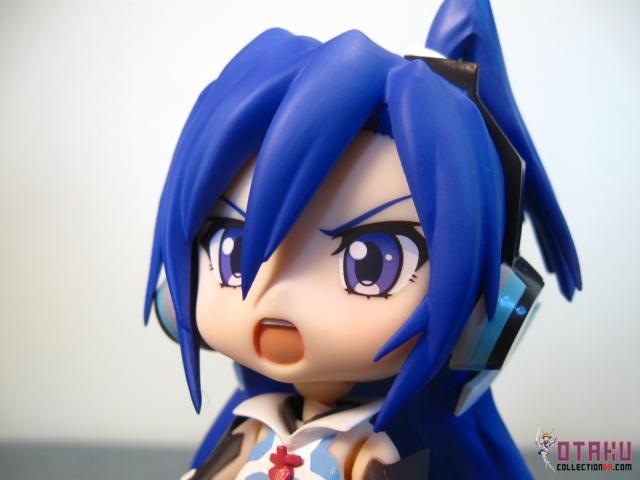 The yelling face is probably how most people remember Tsubasa. She's a tough no-nonsense type of fighter who deals with threats with equal amounts of cool-headed professionalism and unflappable determination. 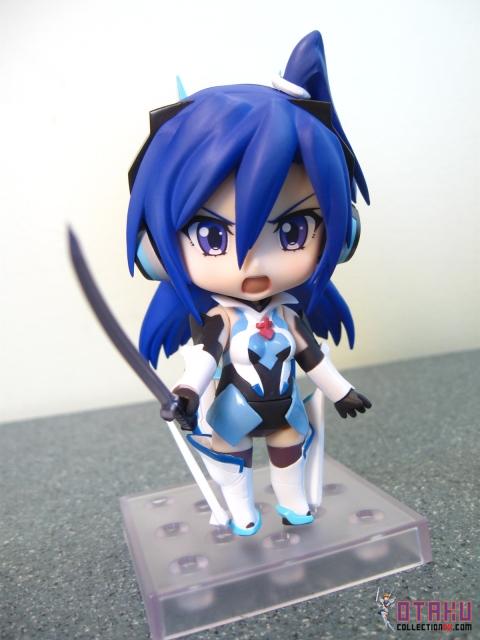 Even though Nendoroids are simple figures with limited articulation, their attention to detail excellent finish allow them to capture the essence of a character. Even little Tsubasa still looks like she means business with her katana. 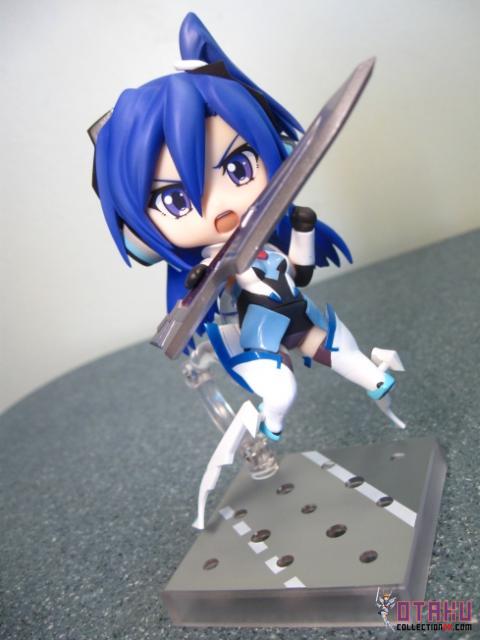 Her weapon holding hands do a decent job of gripping both of her blades and the small but effective set of extra limbs let her pose like a real action chibi. The arms simply plug in and out of her shoulders and can raise up and down. The legs swap in and out from the absolute area of her thighs and can twist at the joint. Her hips are also ball-jointed for extra articulation. 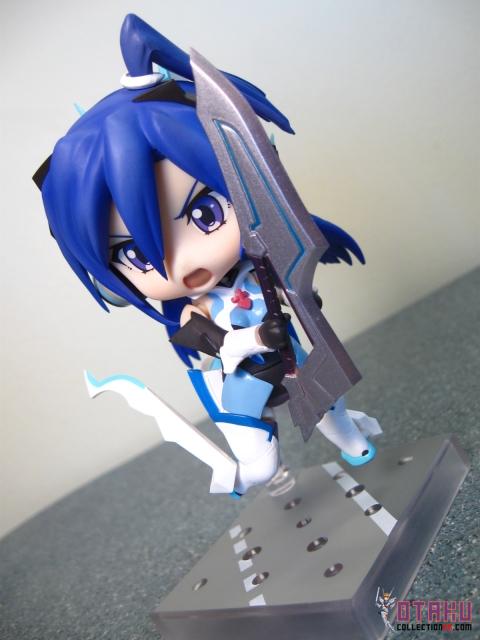 When posing her head be sure to keep the ends of her hair out of the way. I must admit due to her extremely sharp design, Tsubasa can be tough to handle when swapping parts in and out. 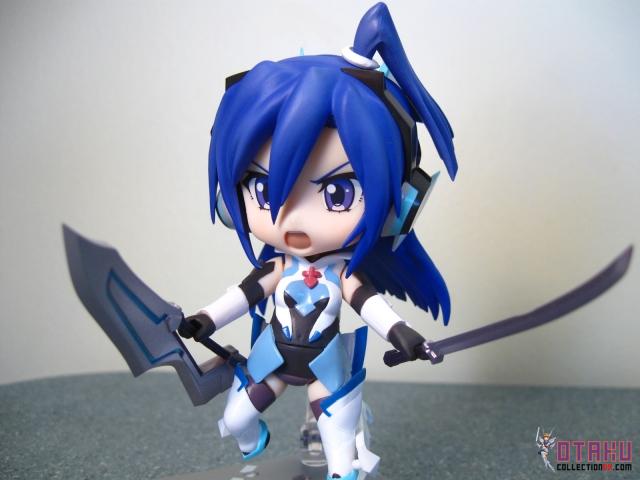 Still, Tsubasa can dual wield swords like a true warrior. Did I mention how much she likes swords? She even considers herself to be a sword! 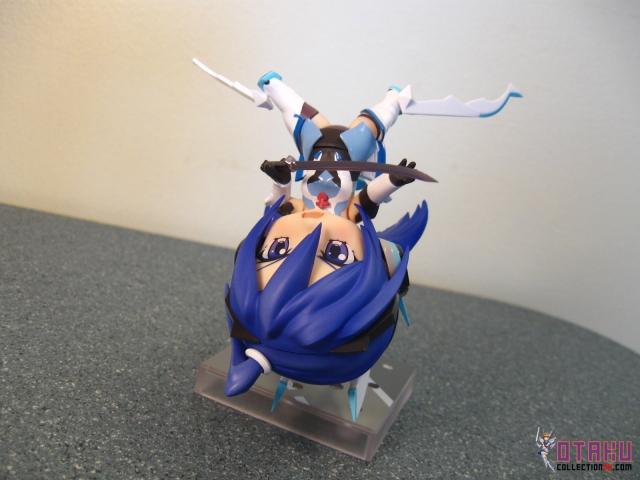 Both sets of leg blades plug into the ankles of either leg type and can move around via a ball-joint. Tsubasa's fixation with swords is manifested through all the bladed on her armor which she uses to slice up Noise monsters with ease. 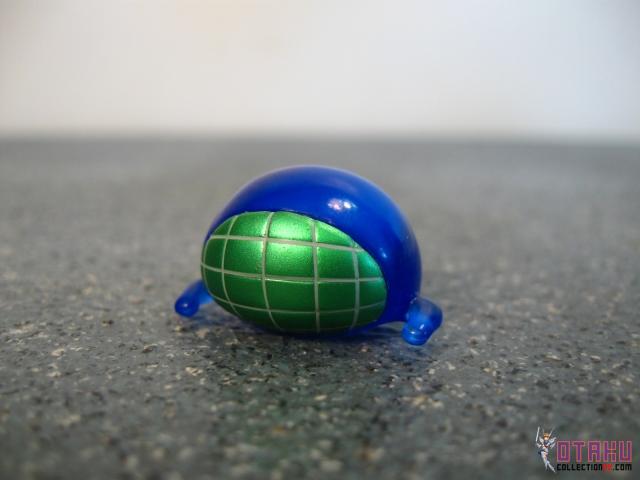 Speaking of Noise, the little one included with Tsubasa is just a little blob o' monster. It's one of the basic types of Noise that is nevertheless capable of making defenseless humans turn to dust. The Noise is made out of semi-clear plastic with a painted green "face." 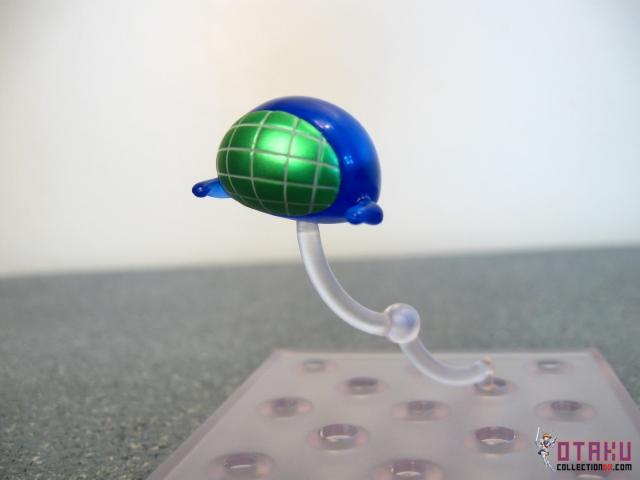 As mentioned before, the Noise even gets its own display stand that plugs in underneath. The armature has one point of articulation in the middle in addition the the ball-joint in the figure and at the base. 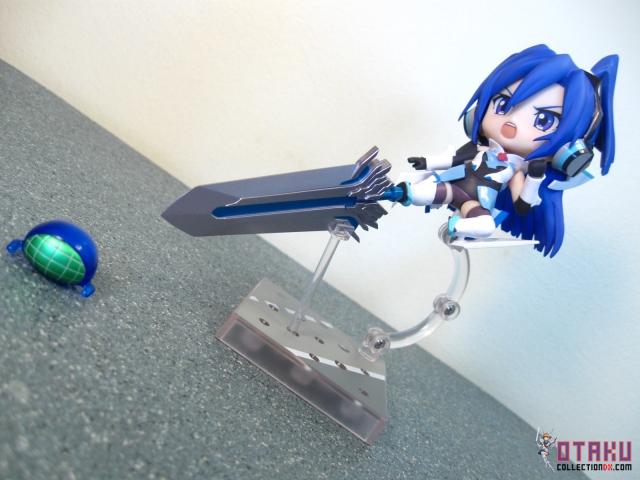 Of course the little Noise is really here to get summarily destroyed by Tsubasa and her swords! For some real overkill you can use this huge broadsword that itself a smaller version of a building sized (!) one she employed in one episode to keep a foe at bay. Here it lets her deliver a wicked RIDER KICK on the hapless Noise. Setting this up is somewhat tricky as you have to wedge the sword into the clear display arm and then position Tsubasa just right. Surprisingly the sword stays attached to the arm pretty well but Tsubasa tends to tumble off her mounting. Oddly enough there is no way to connect her foot to the handle of the blade so you just have to line them up yourself. Still when it's all put together, sword kicking Tsubasa makes for an impressive display! 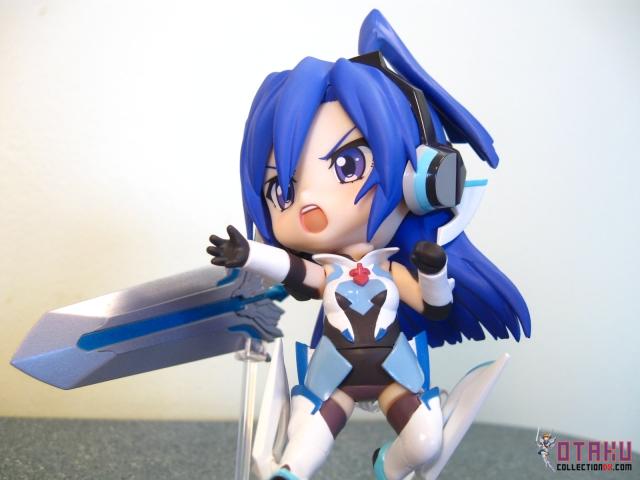 And if you want you can always have Tsubasa telekinetically hurl that huge sword at things since the handle is too small for her to grip it normally.

But enough about swords, let's talk about that mysterious third face. 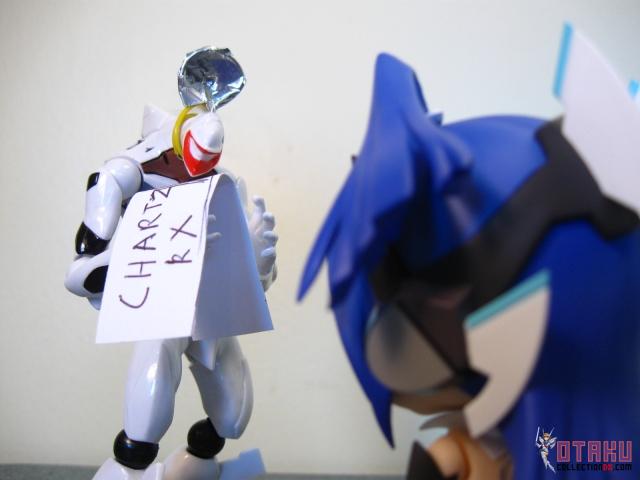 "Well Tsubasa, it says here there is no reason why you shouldn't live a long and healthy life..." 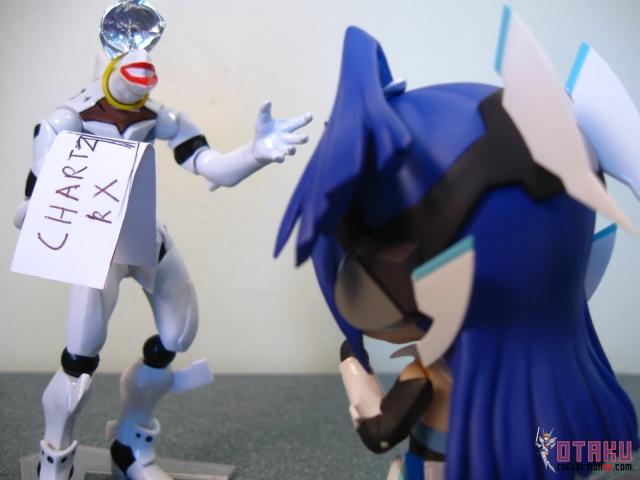 "However you will be bleeding constantly from both eyes." 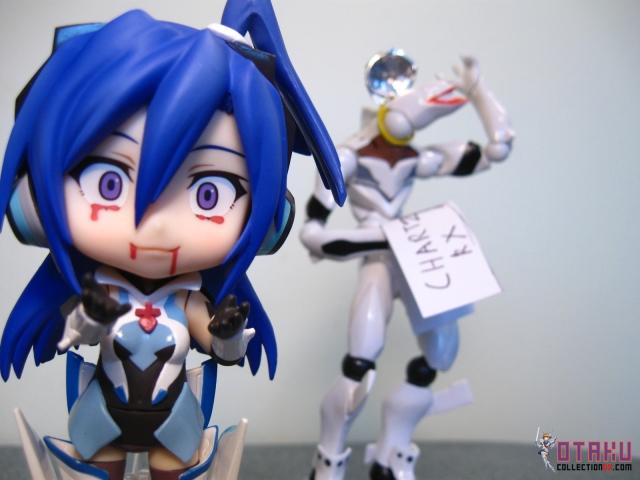 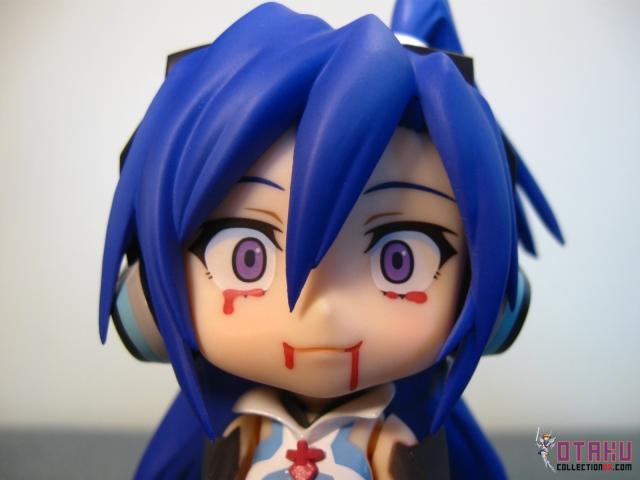 So for those who haven't just spit out their beverage all over the screen, allow me to provide some context for... blood face. 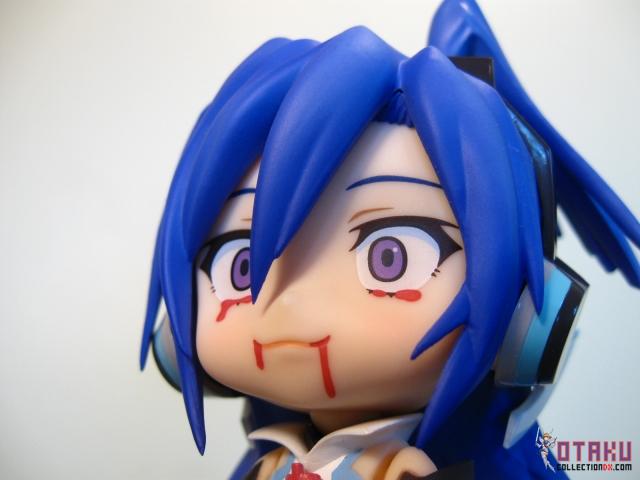 While it may look like someone caught Tsubasa stealing the last jelly doughnut, this is from one of the most poignant scenes from the anime. 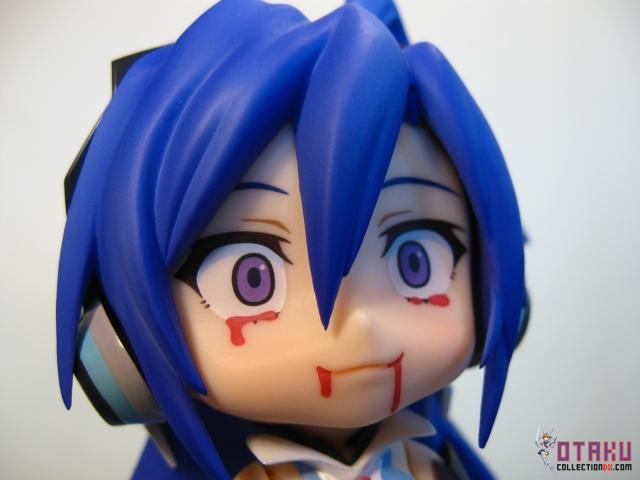 Symphogear users gain power from the songs they sing during battle. When the enemy is just too tough, they can sing their "swan song" which gives them an immense boost in power at the cost of pushing their bodies to the breaking point. When Tsubasa encountered a mysterious and powerful Symphogear user, she sang her swam song in order to ward off this seemingly invincible foe. The resulting strain left her looking like... 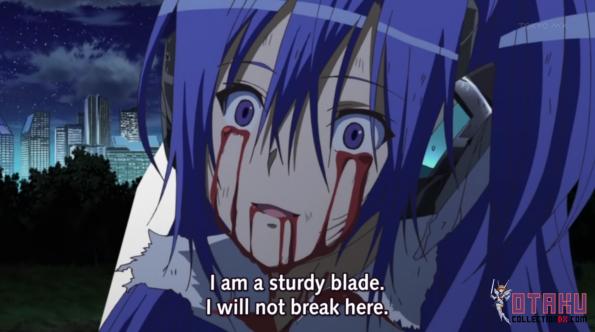 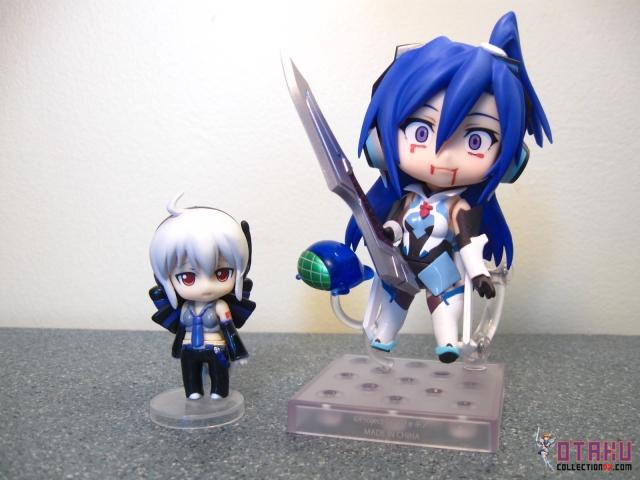 Regardless of its context in the show, Nendoroid Tsubasa's blood face is pretty hilarious in a morbid sort of way. On this figure she doesn't look shocked in a "under extreme physical duress" way... more like she was startled by Solid Snake. 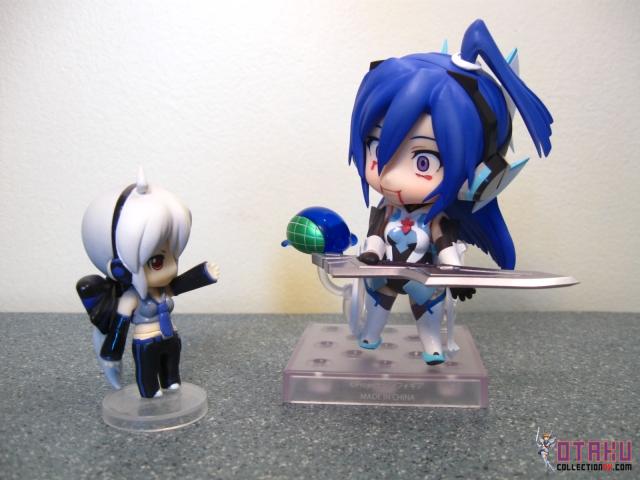 I honestly cannot help but chuckle a bit when I see her with that face. This makes me a bad person. 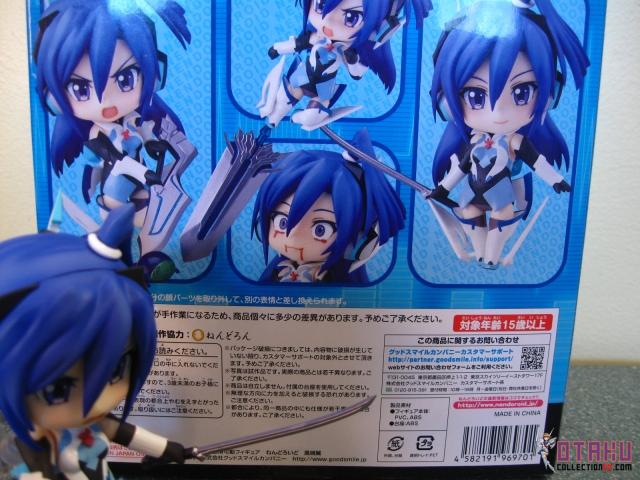 I can't be the only terrible person out there because they make no bones about advertising the blood face on the box! And not just once... 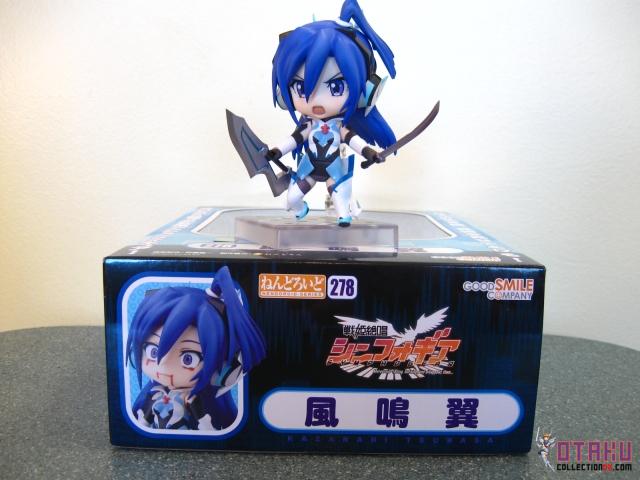 But twice! Yeah it's the bottom of the box you most people won't see that right away but still.

When it came down to choosing between getting the Figma of Tsubasa and getting the Nendoroid, I have to confess that the blood face pushed me into the getting the latter (because I am a bad person). Tsubasa was one of my favorite characters from the show so I'm glad to have a quality representation of her in plastic. While not as full featured as a Figma, the Nendoroid has a lot of charm and character to it that most action figures can't beat! I highly recommend this to fans, Nendoroid collectors, and bad people alike.