Out of the box, my Pteragordon came in pieces: the body, legs and wings are separate parts that attach to the body via eight-sided pegs. 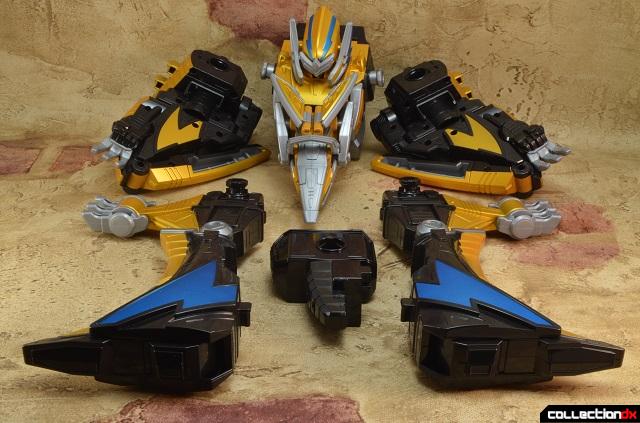 Like of all the other Zyudenryu, Pteragordon comes with his very own Jyudenchi “Beast Battery”. We’ve been through this plenty times, so I am sure you know the drill.

The back of the battery has the name of the mecha: Pteragordon. 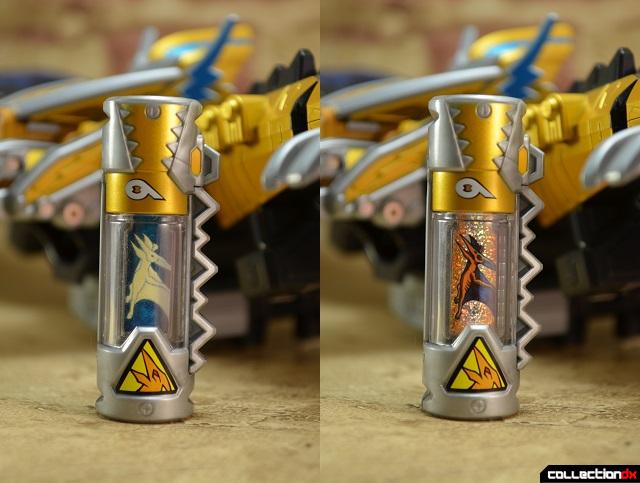 In dormant mode, the sticker on the panel can soak up some light. Then, if you turn the lights, you get a glow-in-the-dark outline of the dino.

Pteragordon is the first mecha since Gabutyra to house its own sound-producing electronics. 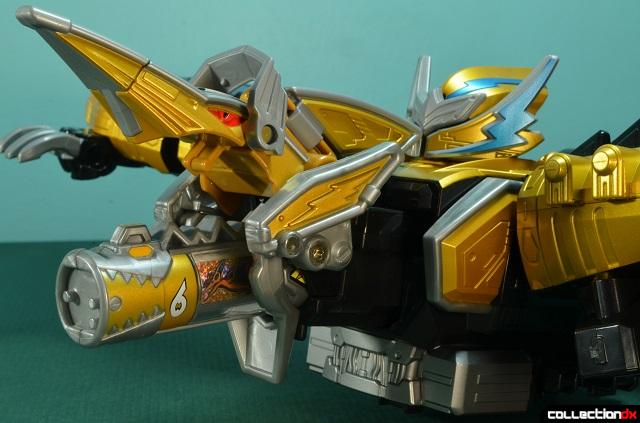 When you insert a battery into the mouth of Pteragordon, the toy and it will say:

“GABURINCHO! Pteragordon!" The voice for this mecha is the same as the one used for Gabutyra.

Unfortunately, this is the only sound that this toy will produce when a battery inserted, since electronics are not as sophisticated as the ones on Gabutyra. At the top of the battery chamber's inside of the battery chamber there is a button that is activated when the lightning bolts on top of a beast battery press it. This is different from Gabutyra's chamber which has a battery reader that can differentiate between the different batteries. So inserting any battery, or any object really, will produce the same sounds from the toy.

This makes me feel not so bad for missing out on the first run of this toy, which included the special Deboss Battery that was used during Pteragordon’s first couple of appearances in the show.

You can also activate a couple of sounds on the electronics by pressing the well-hidden button next to the "On/Off" switch ( which causes the toy to make the same chomping sound as Gabutyra when it is turned on). 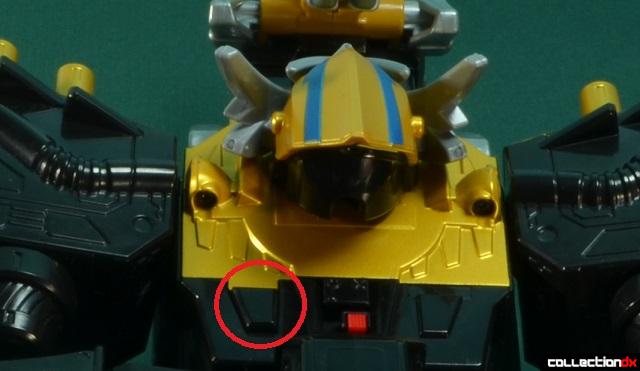 Now that we checked out the electronics a bit, let’s move onto the toy. 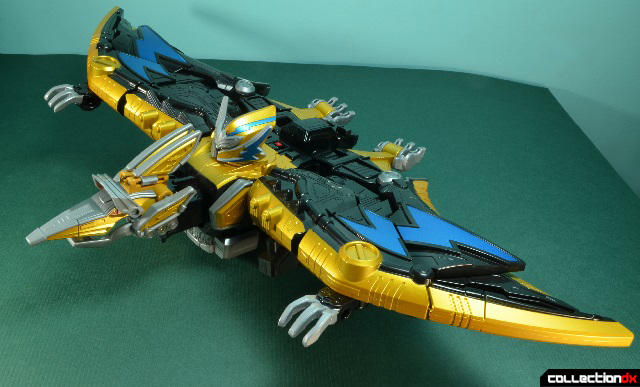 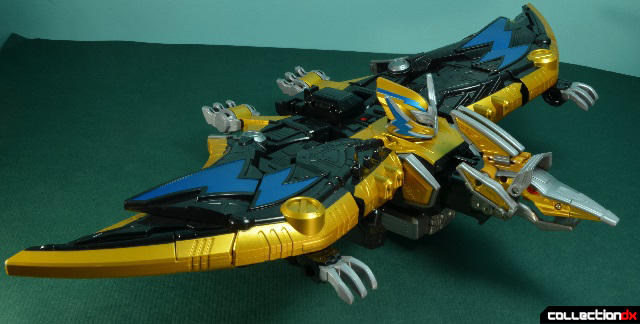 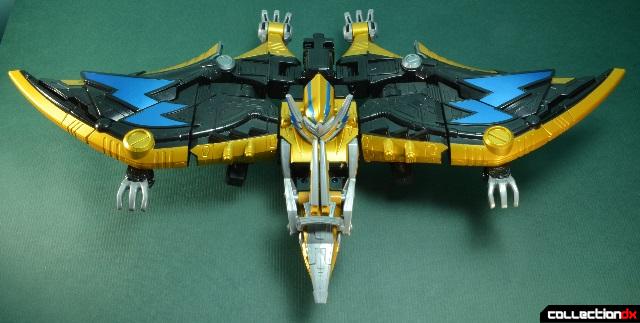 From the top, Mr. Gordon looks pretty good, thanks to the lighting theme and the cool black, blue and gold paint scheme.
While some of the features are a bit more flat than I would like, such as the arms and legs, Pteragordon still has more depth and detailing than many of the other Zydenryu so far. 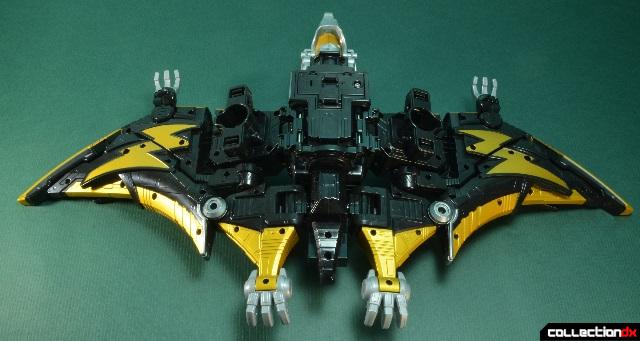 The underside is not as pretty to look at , since the function of the toy overpowers the form. The bottom of this beast, is home to the shoulder connection points for the robot form, the compartment for the electronics and a whole mess of screw holes.

You can display Pteragordon as he appears in the early part of the show by simply bringing the visor down over his eyes. 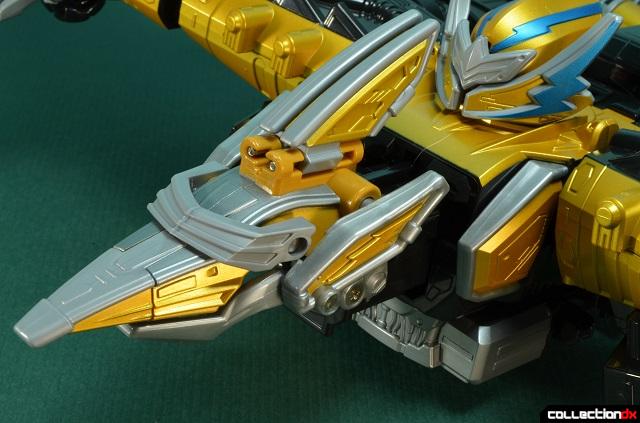 Pteragordon is the first toy in the line that can transform into robot on all its own. With a simple, yet satisfying transformation, the mecha transforms in to Pteraiden-Oh .All around, the Pteraiden-Oh looks pretty damn sweet! The combination of the slim build with black, gold and blue paint make this figure look quite sleek. 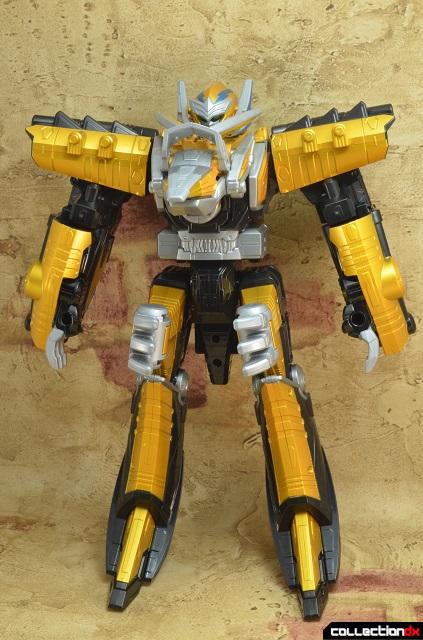 At this time, we can talk about one of the sounds the toy makes with the battery inserted. A press of the button will play a music riff and the signature voice of the toy line, the voice-over for the show and also Kyoryu Violet himself will announce that this is the Pteraiden-Oh. 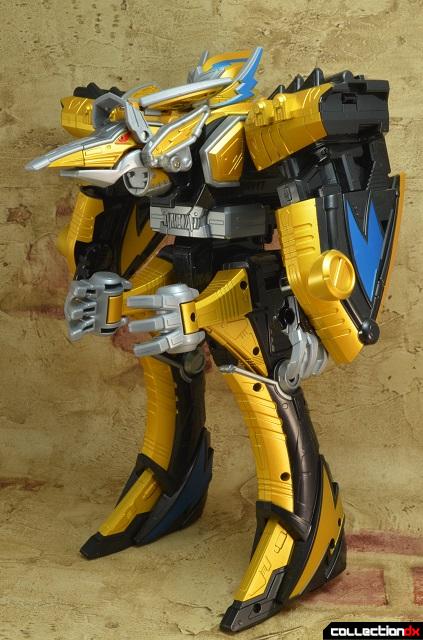 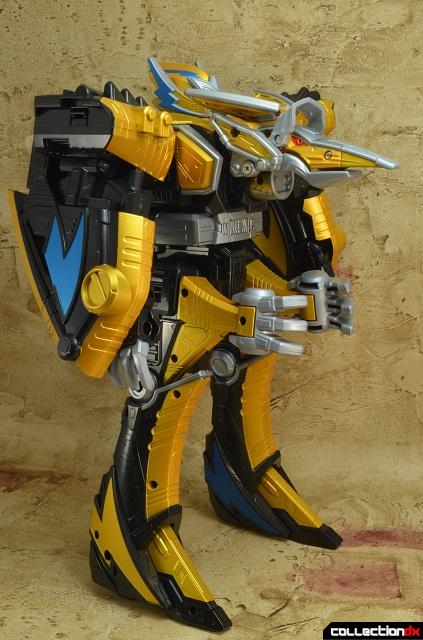 From the back, the figure is mostly black. This is due to the fact that the back is composed of the inside parts of Pteragordon. 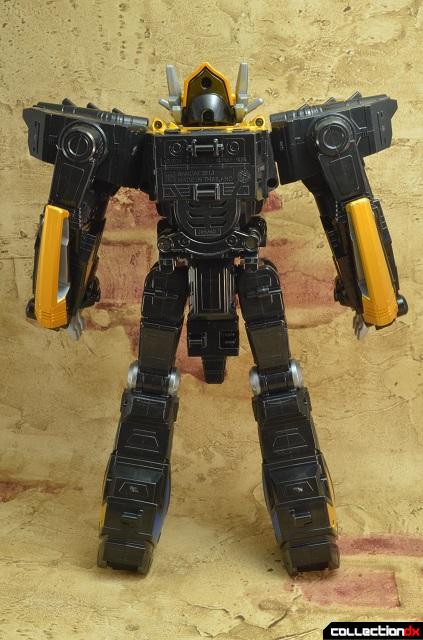 You can bring down the visor on the pterodactyl and robot faces to turn this into “evil” Pteraiden-Oh. 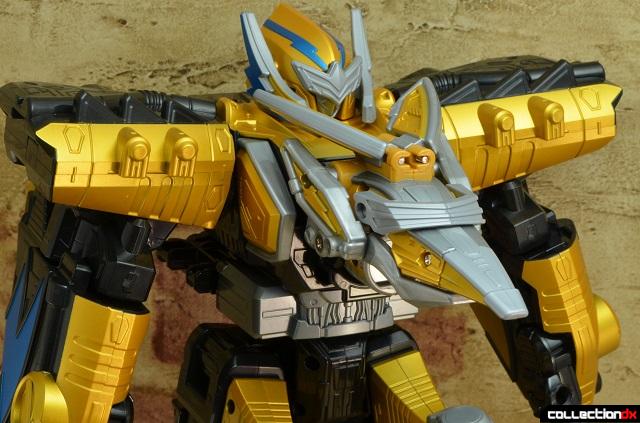 The Pteraiden-Oh is notable for first showing up in the show as an evil mecha first, much like the Gao Hunter from Gaoranger.

Besides looking cool, the Pteraiden-Oh poses an ability that is quite rare in Super Sentai toys: articulation in the knees! Yes, this toy is not just one big brick of plastic whose legs are good only for decoration and keeping the toy upright.

This is one active mecha! 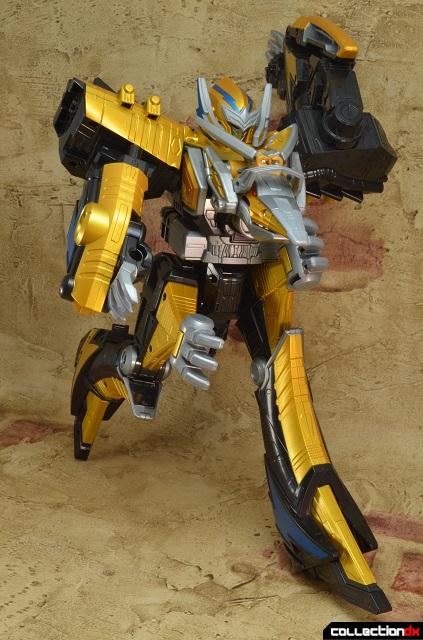 It can do a high kick! 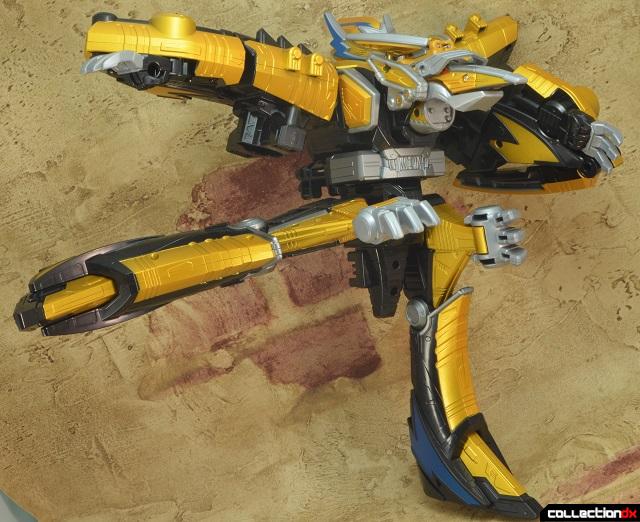 The feet can even extend out a bit. This is used to close up the gaps on the wings, when this toy is in its Pteragordon form.

It can simulate that weird thrusting pose that Voldo does in Soul Calibur. This is made a bit creepier with thanks to the positioning of the hands on the upper legs. 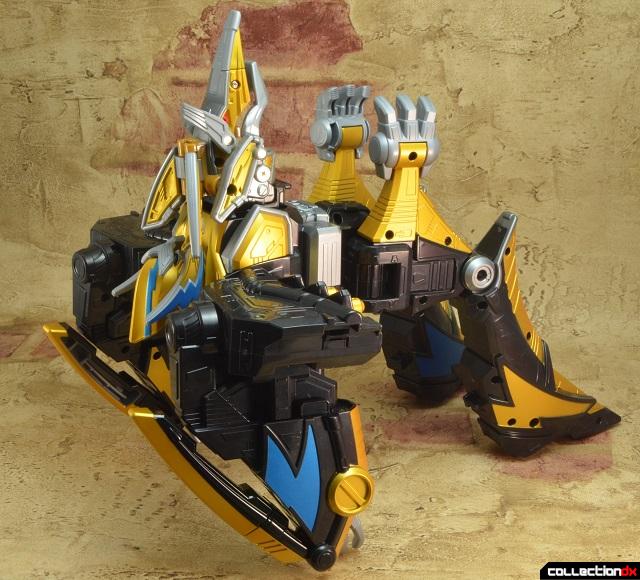 And thanks to the ratchet joints at the thighs, it can even do the splits. 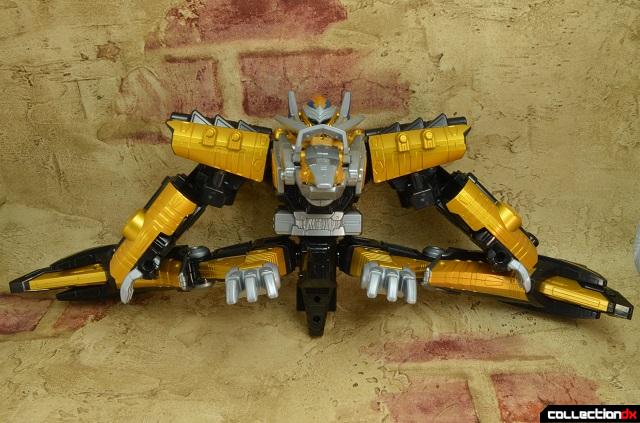 Now I just want to note that the Pteraiden-Oh cannot actually stand on one leg or hold the splits pose. For the photos, I had it resting against the back of my light box. This brings me to the point that the articulation at the knees, thighs and feet is, as great additions to the toy as they may be, are were not engineered with having an articulated robot in mind. The transformation between the Pteragordon and Pteraiden-Oh calls for these parts to move, so they were engineered with these joints. Nevertheless, it is still amazing that he can move his legs.

Transforming the Pteraiden-Oh back to its pterodactyl form, then attaching it to the back of the Kyoryujin and swapping a couple of parts will create Raiden KyoryujIn. 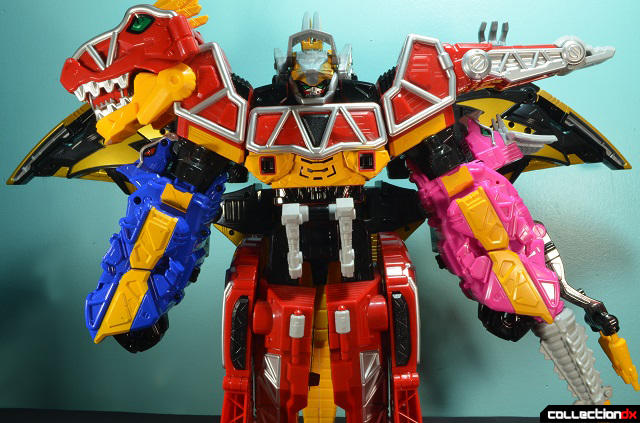 In this form, the Pteragordon is known as the Ptera Wings. At this time, it is appropriate to hold the button on the back of Pteragordon, with the battery inserted of course. A shamisan/rock jingle will play as we hear Kyoryu Violet announce that this is the Pteraiden-Oh Kyoryujin. 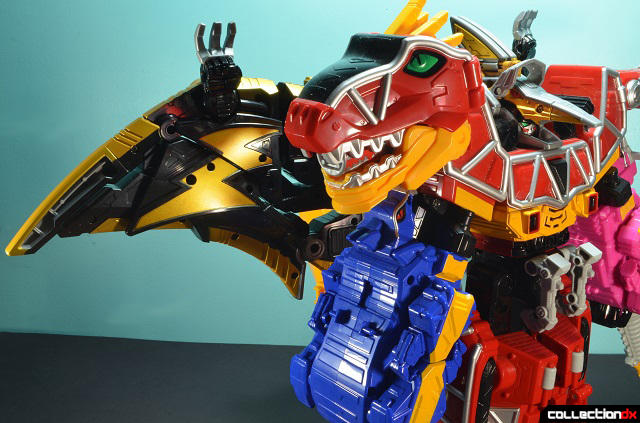 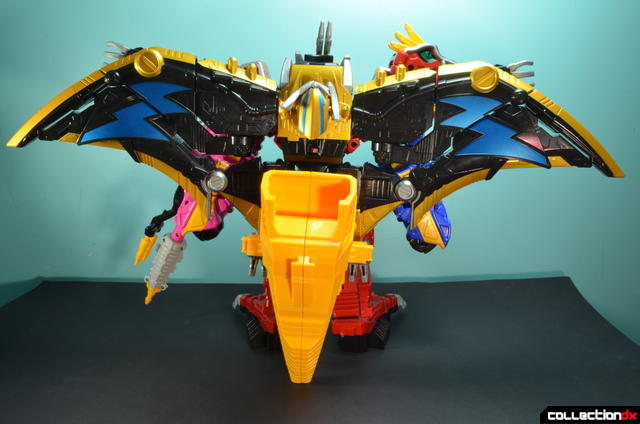 This works to effectively turn this tail into the third leg of this tripod formation. 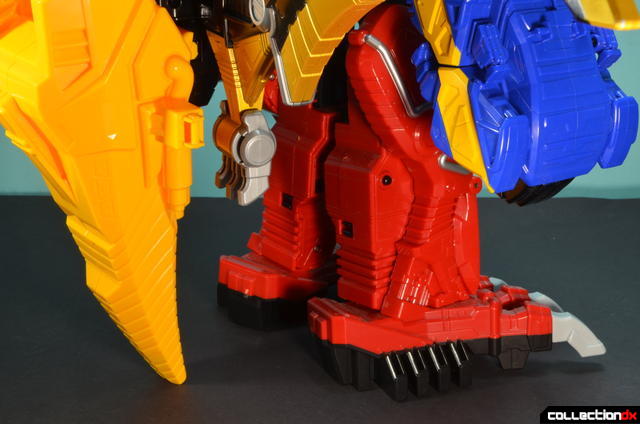 This is probably the only way the toy would stand up, as it is super-back-heavy. You would think that with the support of the tail and the four connections on the back would keep Pteragordon attached to the Kyoryujin, but that is not always the case. Being as heavy as Pteragordon is, it has a tendency of popping off if you try to move the toy by just holding the Kyoryujin. So you have to take a two-handed approach to handling this guy, unless you want parts falling off. Good thing these toys are super-sturdy can handle falls, should this happen. That being said, this is my least favorite combination of Pteragordon, since it is fairly unstable. Not only did I have to worry about Pteragordon falling off the back off the Kyoryujin, but I also have to deal with the weakening connection point on Gabutyra’s left shoulders, which cause the Dricera to fall off fairly often.

Another nit-pick I have about this combination is that Pteragordon attaches over the on/off switch of Gabutyra, making it inaccessible. Just like the other mecha’s in the line, you can produce the mecha’s finishing move by inserting Beast Battery into Gabutyra’s mouth. In order to do this though, you have to first make sure you go through the battery swapping process that switch the electronics in the mecha into Kyoryujin mode.

After all this is done, inserting the battery into Gabutyra and pressing the button on Gabutyra's chest will produce a:

“Vamola Much! Don Don! ”, which is followed by a lightning sound and some explosions.

But Gordy has more in store for us. Not only can it become the Pteraiden-Oh and the Ptera Wings, it can also combine with the auxiliary mechas in the line. The following are the combinations that have been used in the show so far. 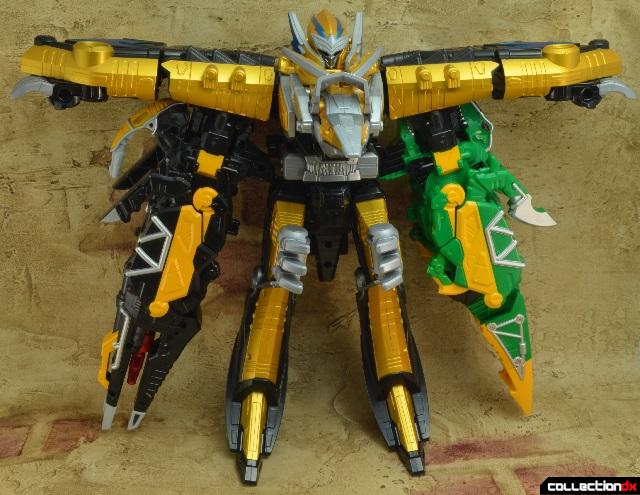 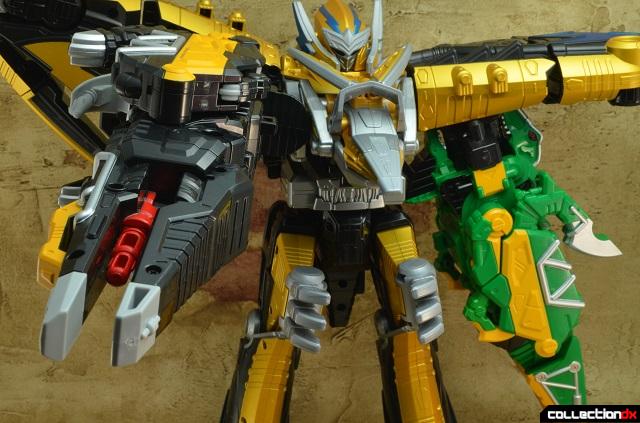 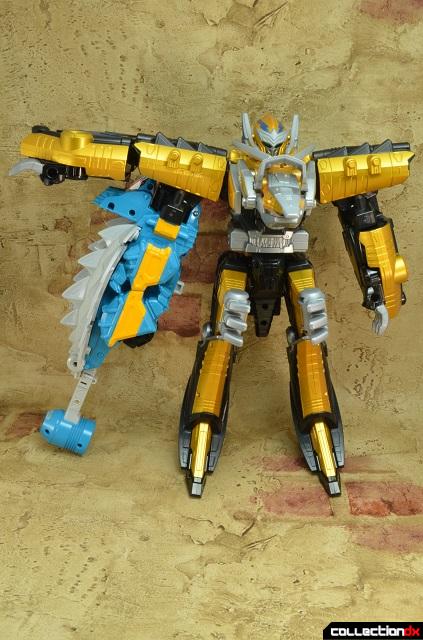 This combination does work quite as well as it should, due to the fact that Ankydon has the longest, straight tail of the auxiliary mechas and that Pteraiden-Oh is shorter than the Kyoryujin. With Ankydon’s hammer fully extended, the right leg does not fully touch the ground. 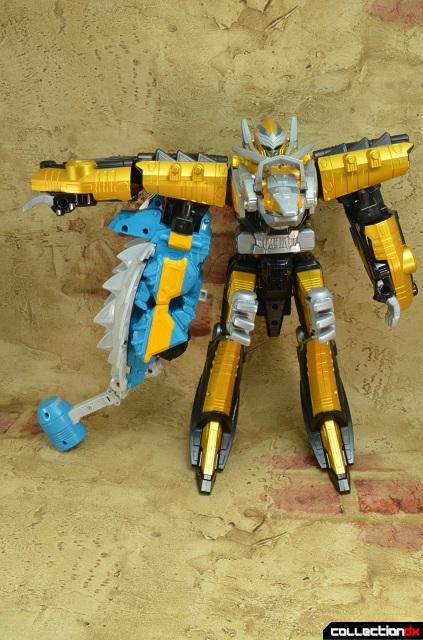 To alleviate this issue, you can either fold the hammer up or move the arm up. 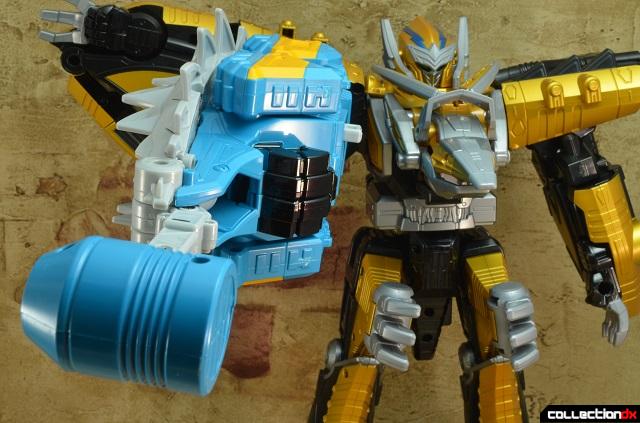 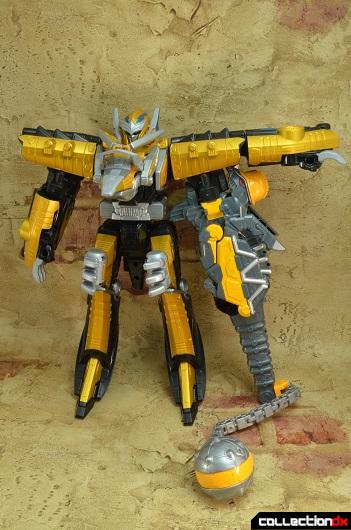 Even though these combinations add extra weight to one side of the Pteraiden-Oh, it surprisingly has no issues keeping upright. 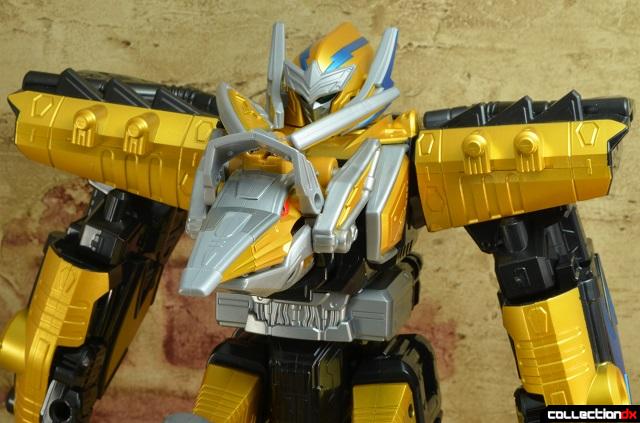 So there you have it. The Pteraiden-Oh is a breath of fresh air in an otherwise stale line. It exceeds in terms of design, play value and just all around coolness. This toy has quickly become my favorite of the line. Sorry Gabutyra, you are going to have to settle for being number 2.

2 comments posted
As cool as the design is, it

As cool as the design is, it kinda sucks that he just amounts to a wing pack and helmet for Kyoryujin.

While the Ptera Wings aren't the most imaginative use of Pteragordon, I think the Ptera Wings look pretty cool on the Kyoryujin. Plus they give the already-big Kyoryujin even more shelf presence.