In super robot shows, the local police generally have the unlucky task of vainly trying to keep the monster of the week from rampaging through the city until the hero arrives to trash it. Like Patlabor before it, Brave Police J-Decker cuts out the civilian vigilante middleman by making the robots themselves da’ law! I have this weird issue with Super Robot Chogokin Brave figures in that I never seem terribly impressed by them until I actually hold the damn things in my hands. This release keeps that tradition going.

J-Decker comes in a slightly smaller than usual SRC box. The usual emblazoned Japanese text is replaced with the Brave Police’s signature combination phrase in English. 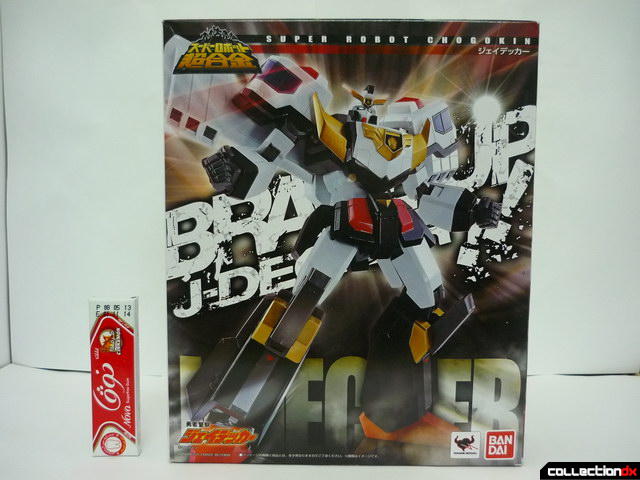 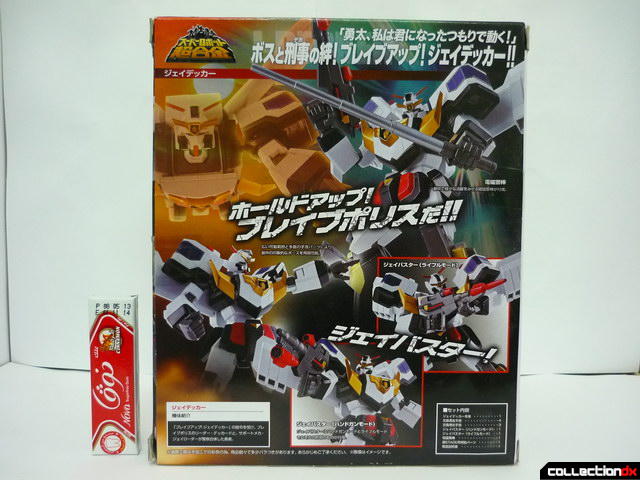 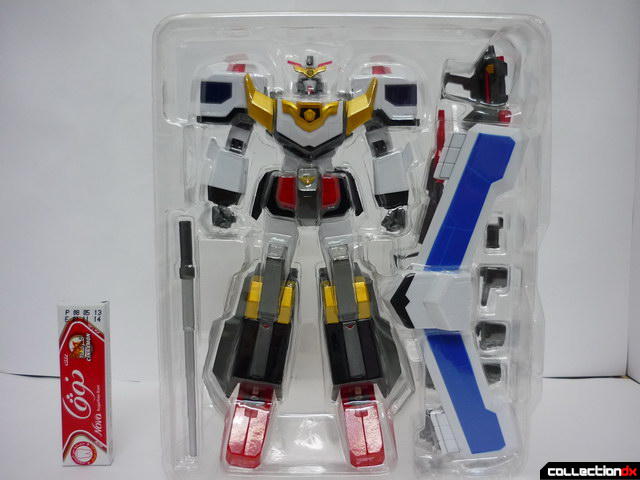 After attaching the backpack, the non-transforming figure stands roughly 16.5cm to the tip of its wings, making this the tallest Brave release yet. 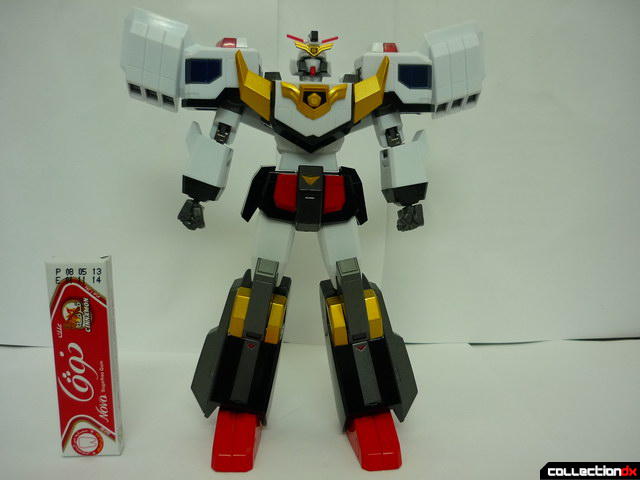 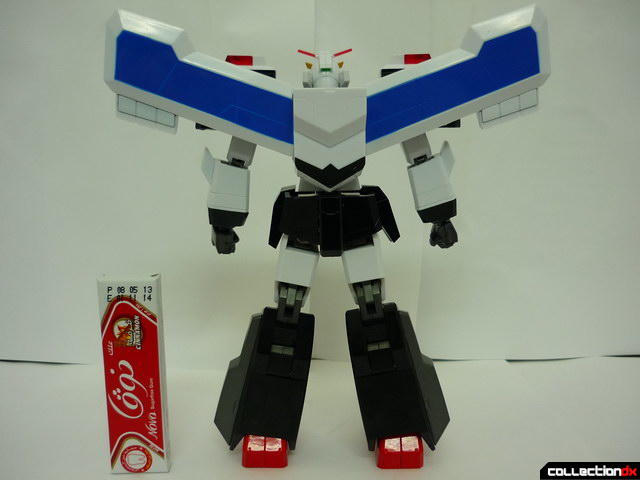 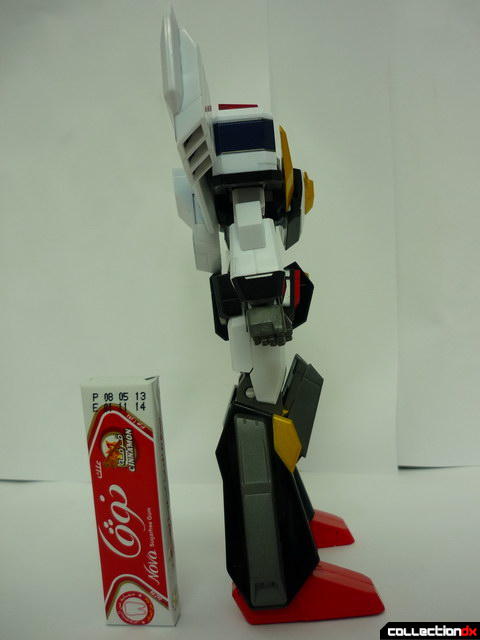 The head is nicely detailed, but you need to be careful when handling it. The crest and the police lights are very thin and made of hard plastic, and the figure does not come with soft replacements. If you’re wondering why there’s no alternate head with a different/removed mouthplate, it’s because behind J-Decker’s faceplate is just another face, that of his core robot Deckard, which isn’t terribly worth the effort to mold. A nice touch is the neck piece that’s molded into looking like it has a carbon fiber cover to avoid that awkward blockiness that Might Gaine’s neck suffered from. 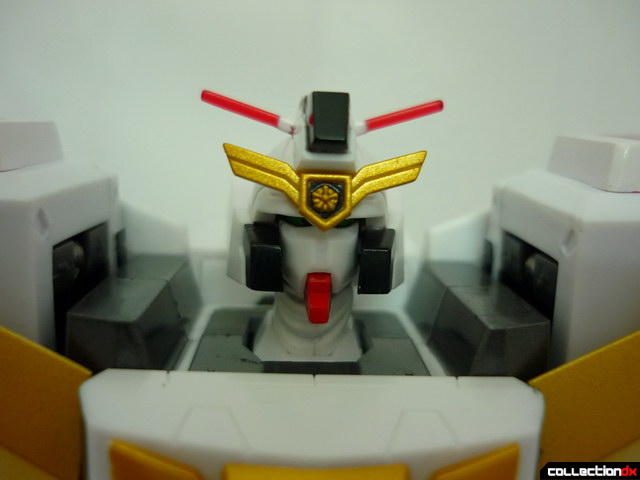 J-Decker shares the same overall build as Might Gaine, right down to the diecast content and metal hip joints that allow great posability. In fact, I could probably get away with copying the Might Gaine review word for word and changing a few things, but what kind of law abiding nerd would I be if I didn’t give the Brave Police the respect it deserves? 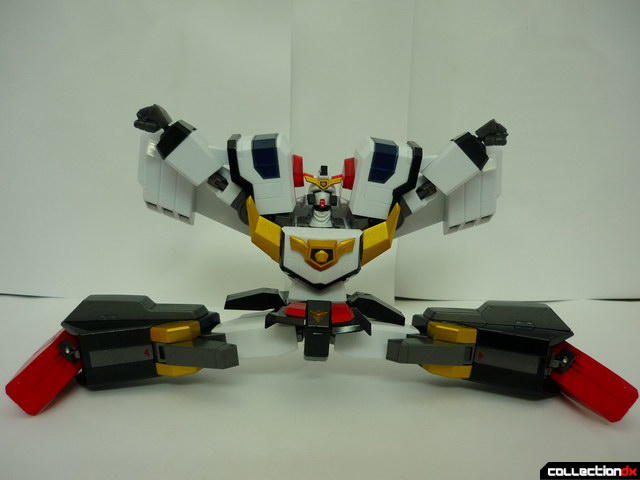 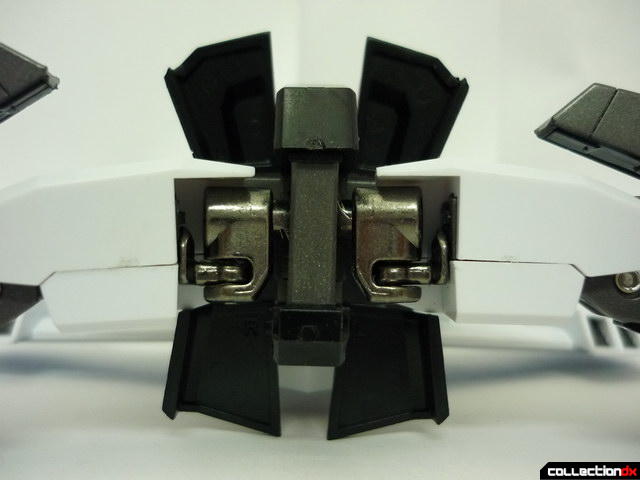 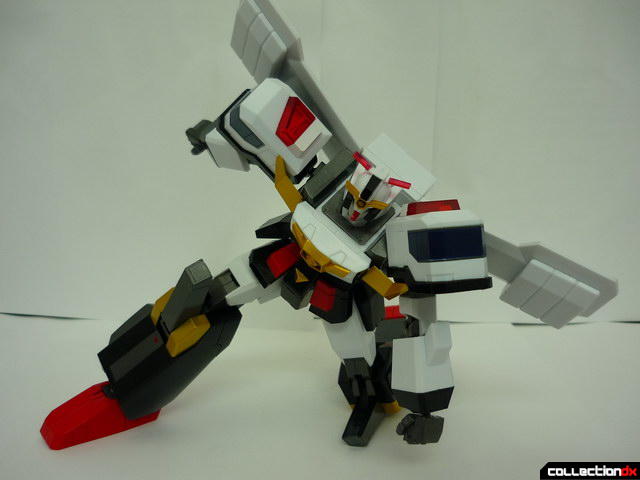 As for the differences, despite the really blocky shoulders the figure can swing its shoulder sockets out even further than Might Gaine. Better yet, the golden edges of its chest crest are hinged and can swing forward so as not to obstruct the arms.

J-Decker’s wings don’t fold vertically but they can swing backwards much like GaoGaiGar’s. Annoyingly, the bottom of the backpack bumps into the rear skirt armor, but it’s not a big deal. 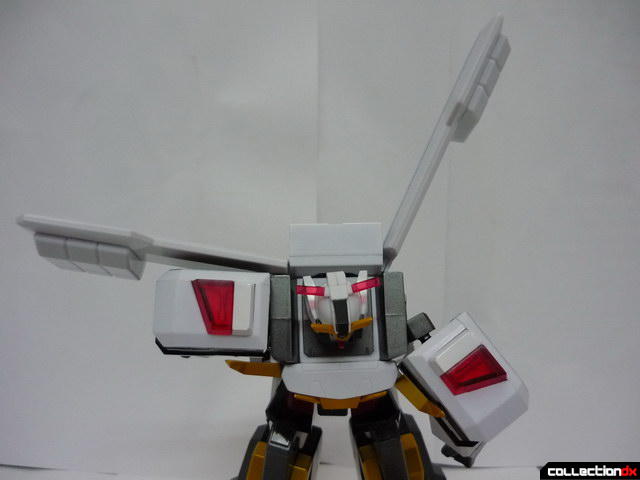 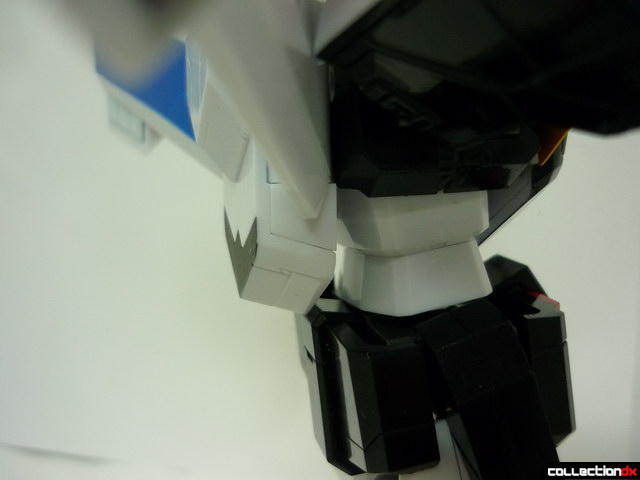 Another difference is that, whereas the top part of Might Gaine’s leg armor didn’t directly touch the knee joint, J-Decker’s hugs it more closely. The result is that the figure’s crus can get stuck behind the thigh when you bend its knees. 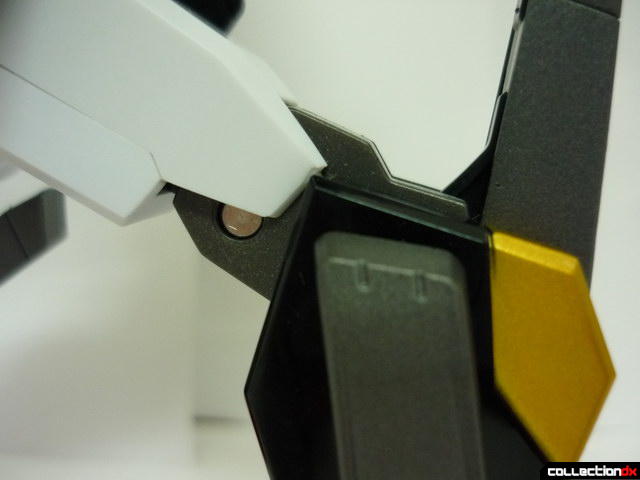 Since the feet have simpler design than Might Gaine’s, when you pull them down you can now see how the ankle joints look like now that they’re not obstructed. On the other hand, the bulk and the single color give J-Decker a bad case of mecha clown shoes. 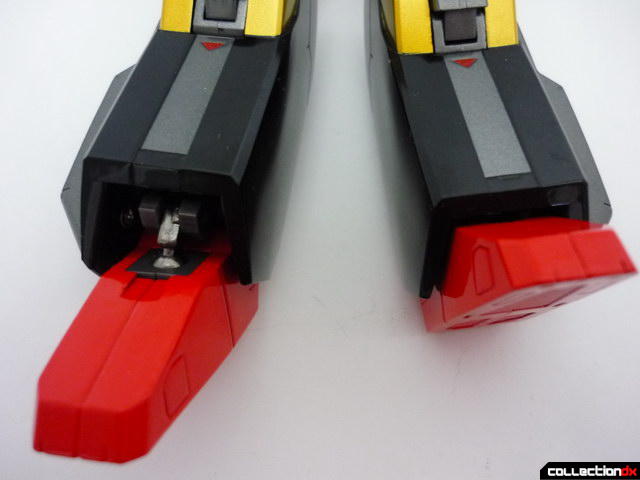 J-Decker comes with one pair of closed fists, two pairs of weapon holding hands, one pair of open palms and one finger pointing left hand. They mount on double ball-jointed wrists that are less prone to popping off than Might Gaine’s were. 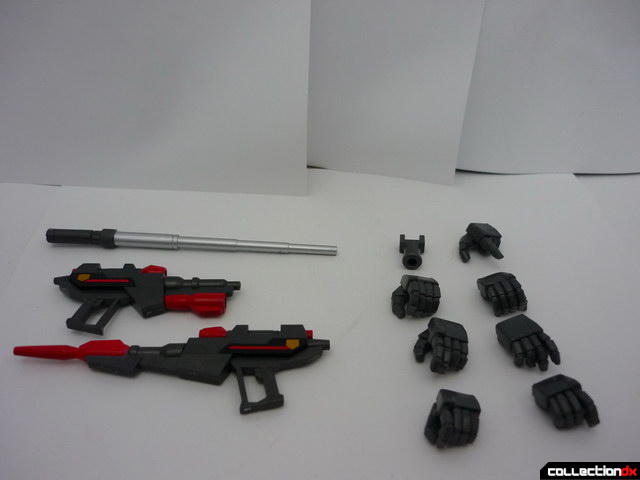 Like any good policeman, J-Decker prefers to incapacitate criminals up close with an electromagnetic baton. The simple look suits it perfectly, but wouldn’t you freakin’ know it the first wave defect fairy pays me yet another visit and makes the baton handle slightly crooked. 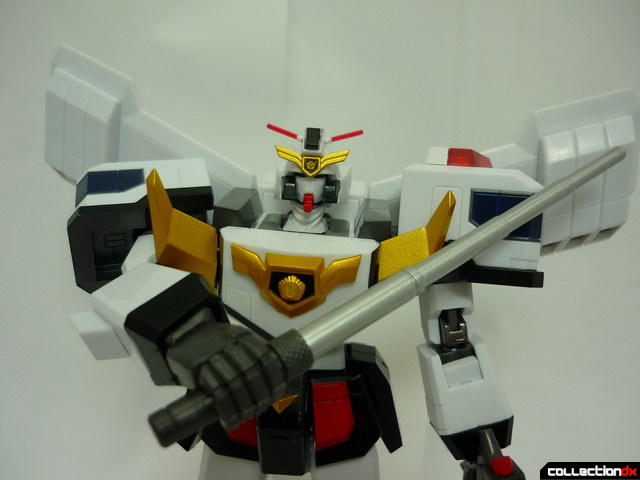 Somewhat less exciting is J-Decker’s gun the J-Buster. You get one version in its gun mode and the other in its rifle mode. The functionist in me is glad that the figure can dual wield the two guns, but the fashionist finds it odd that they couldn’t replicate the incredibly simple transformation of the buster from gun to rifle mode, which is nothing more than another barrel swinging out from under the gun and attaching to the nozzle. Sillier still is how the Brave Police emblem on the gun has no tampographed details whatsoever when the smaller crest on the figure’s head has a tiny molded badge. The gun’s aesthetic also feels like it belongs more on a Gundam mobile suit than a Brave robot, but that’s probably just me. 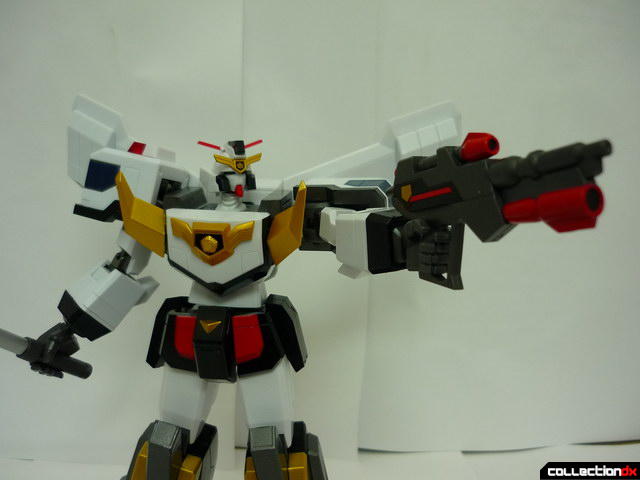 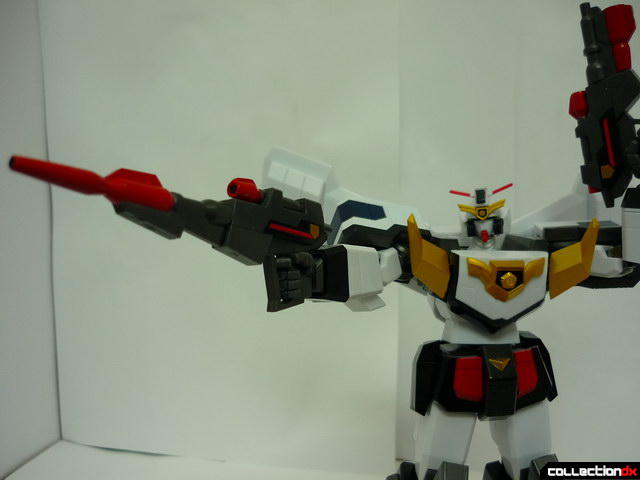 The figure comes with a more or less identical Tamashii Act Stage adapter to Might Gaine’s. 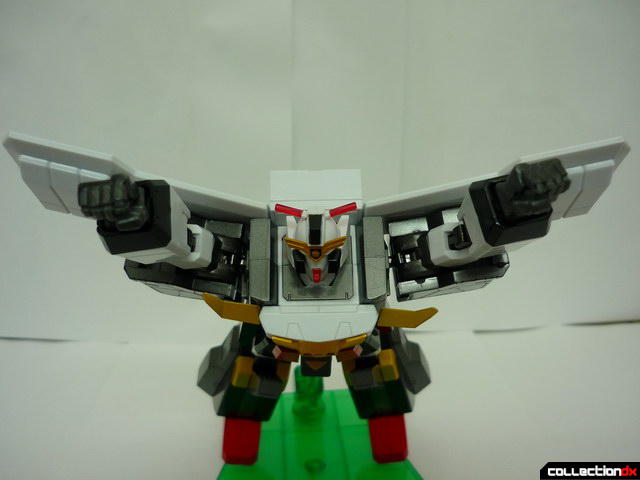 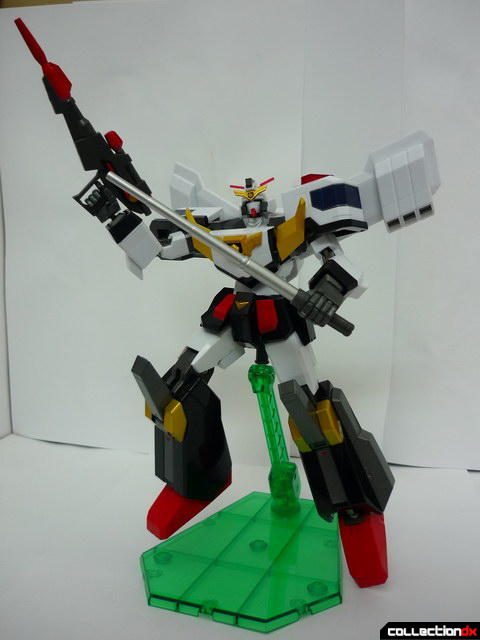 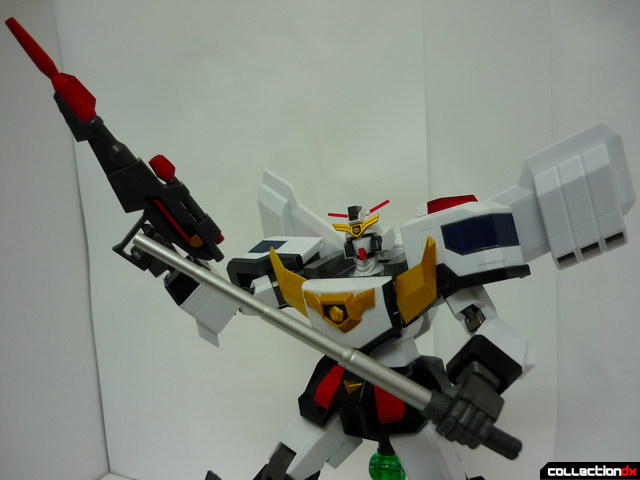 Did I mention how hilariously out of scale the SRC Brave robots are with each other? 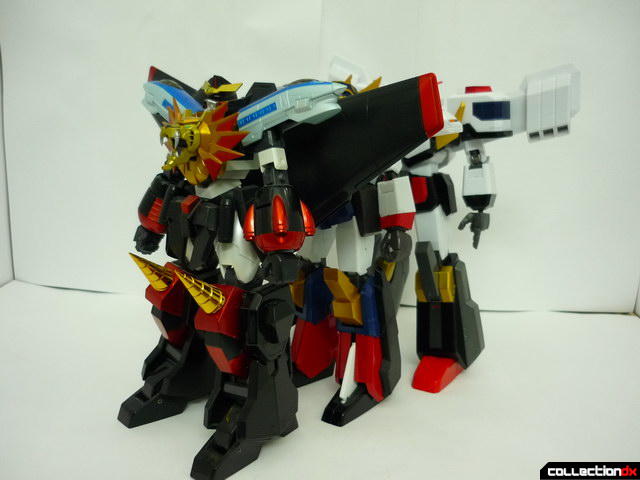 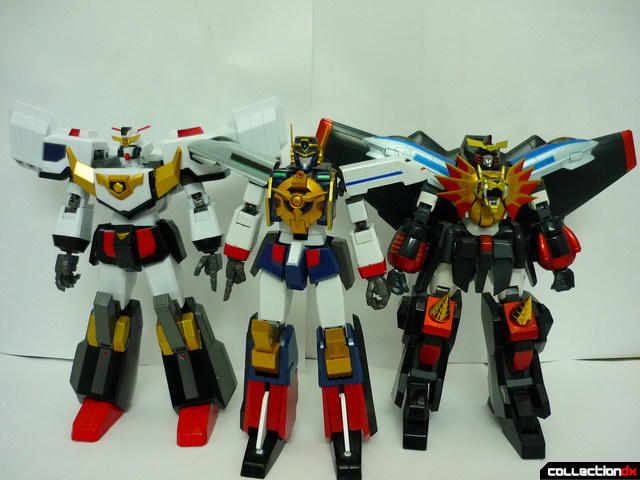 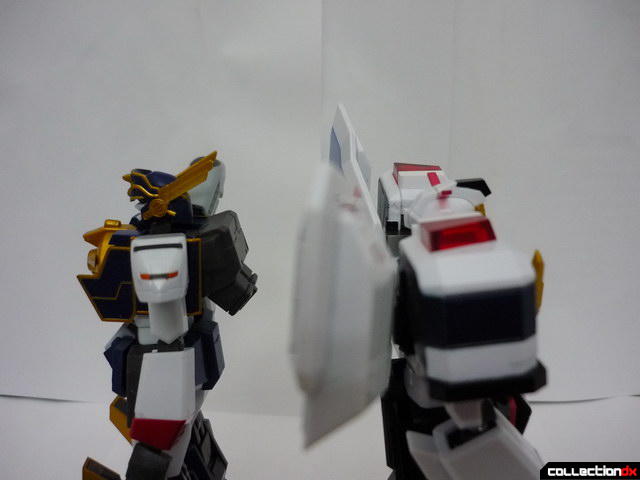 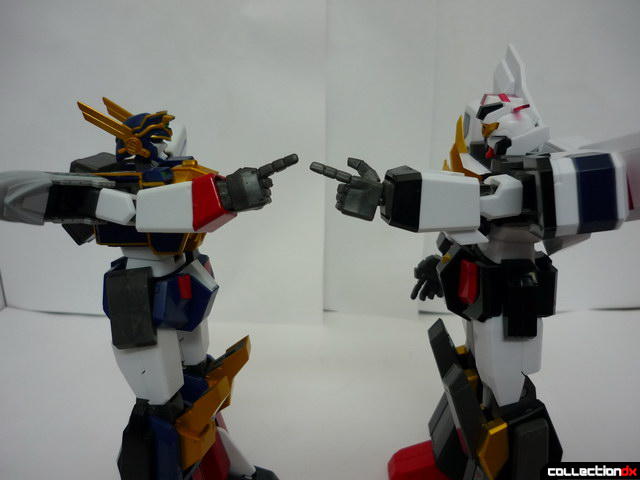 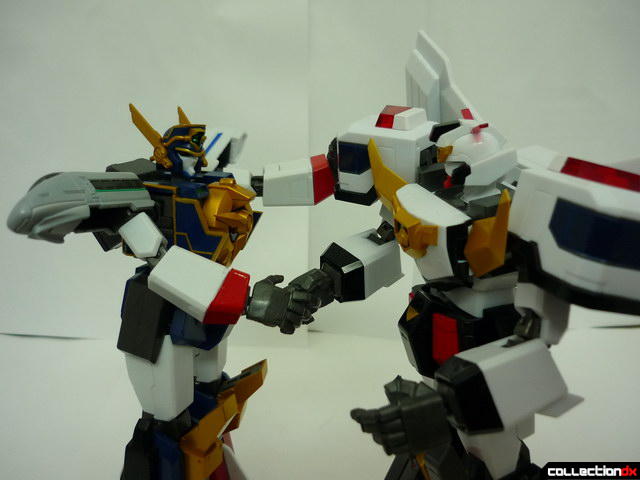 Did you lose weight? 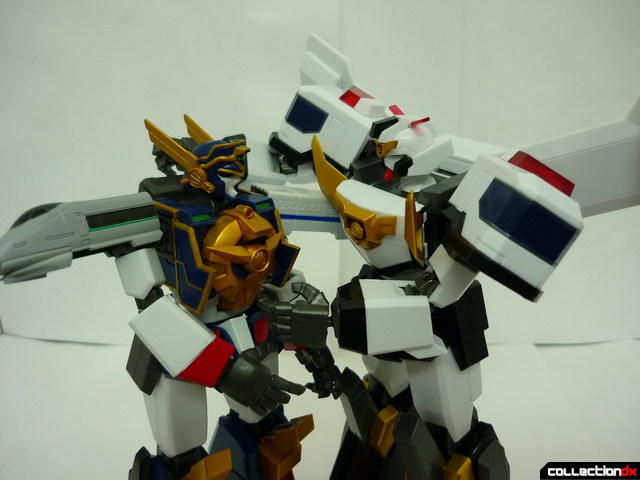 I dunno, did you get fat? 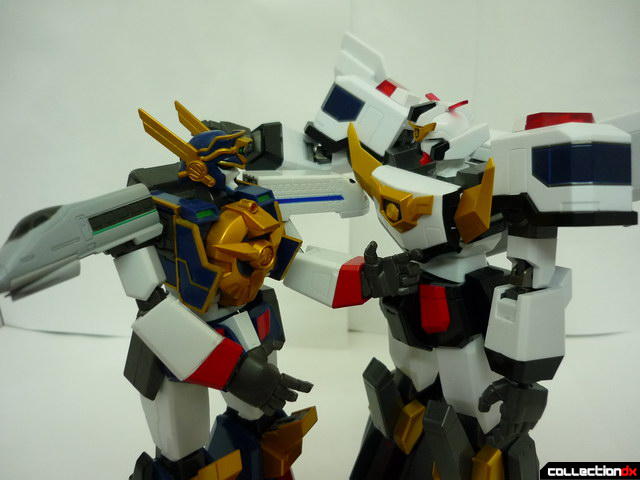 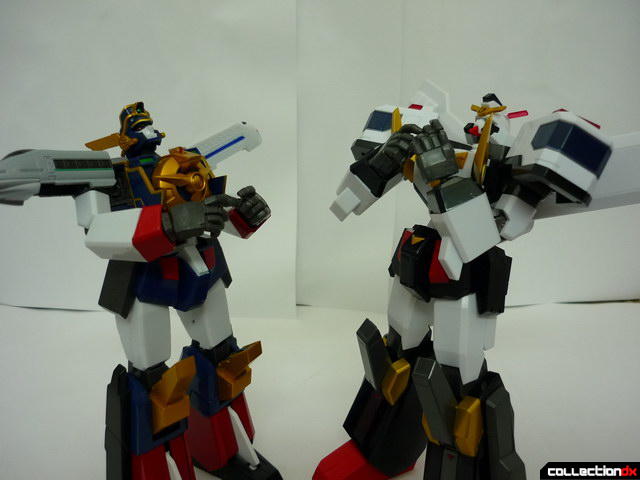 The SRC line has pulled off another successful Brave robot. Even if you’re not a fan of the shows, there’s a lot to love about Okawara’s work on this 90’s franchise (though the less said about most of the Great combinations, the better). 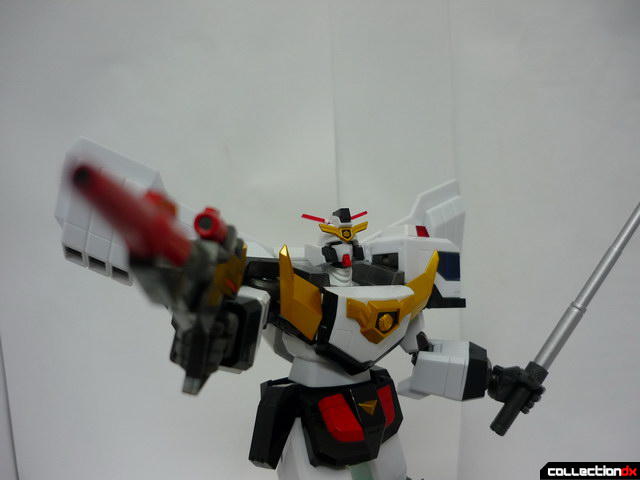 I really would, not just specialty shops or a Japantown, I'd love to go to a Toy's R' Us or Target to get something like this to put on my shelf. If only they were more easy to find ever since the local Asian import store at my local mall closed down :(

It sucks being a 14-year old teen who lives in an area where you can only find this stuff Online >.<

Meh. As far as giant police robots go, I think something like Patlabor or the Dekaranger robot looks a lot better. And what's wrong with the look of something like Great Exkaiser?

Well I did say "most". Great Exkaiser and Great Fighbird are fine. The other main Greats/Supers/Fires? Not so much.

The figure looks good and moves well, with good accessories. The only problem is its too damn big. It scales way above any of the other Brave robots, and even feels oversized for the SRC line as a whole. I mean we expect Mazinkaiser to be the biggest baddest thing on the shelf, alongside GGG. But J Decker should not be standing an inch taller than Might Gaine. Or a head taller than Daizyujin and the Sentai robots. I know they aren't in any way to scale with each other. But it's just J Decker looks out of place. He is almost the size of the smaller SOC's. He can dance with Venus A and look her in the cockpit and not the breast missiles.