In the Late 70s, early 80s, one of my favorite shows was "Creature Double Feature", a Saturday afternoon double showing of B-movies which would also show Godzilla and kung-fu movies. Saturday morning back then was nirvana for kids. I got up early and sat through shows like Jabberwocky until I could get to the actual cartoons I cared about. I would have my routine, my shows I watched, and I ate the same snacks and the same lunch. I remember it still - Dr. Pepper and a ham and cheese sandwich, with Doritos stuffed inside.

The cartoons stopped around noontime, but later in the afternoon Creature Double Feature would be on Channel 56. it was either that or candlepin bowling. Yes, I spent far too much time glued to the TV when I should have been playing outside, but I have few regrets. There is something to be said for waiting until Saturday to be able to see the shows you want. It somehow made them more special.

My Dad worked on Saturdays, but not a full day, so he was often coming home when Creature Double Feature was on. He'd be tired so he'd kick off his boots and chill on the couch with me. I never knew if he was actually watching the movies, or just decompressing from work. Regardless, it is a fond memory.

Fast forward to the year 1999. I had moved out, my family sort of fell apart, and people had gone their separate ways. Out of the blue, I get a call from my Dad. There was a new Godzilla movie out, in the theatre. He wanted to take my brothers and I to it, and of course, I jumped at the opportunity.

The movie was of course Godzilla 2000, known as Godzilla Millennium in Japan. For me, it was the first "modern" Godzilla film I had seen in a theatre. (We're not counting that american abomination). To be in the theatre with my Dad, the fact that he remembered our times on the couch after work, it meant the world to me. It still does. Because of this, I have a VERY fond attraction to this version of Godzilla.

The latest entry into S.H. MonsterArts, Godzilla 2000 is maybe one of the best "Godzillas" of the line. Part of it is my affinity for the design, but in actuality is really nicely done. 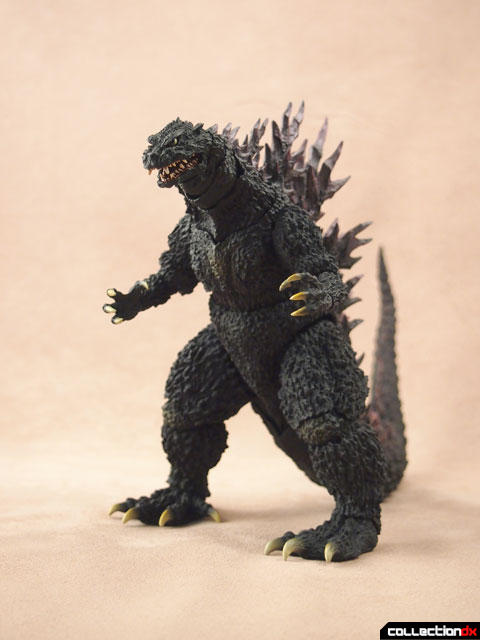 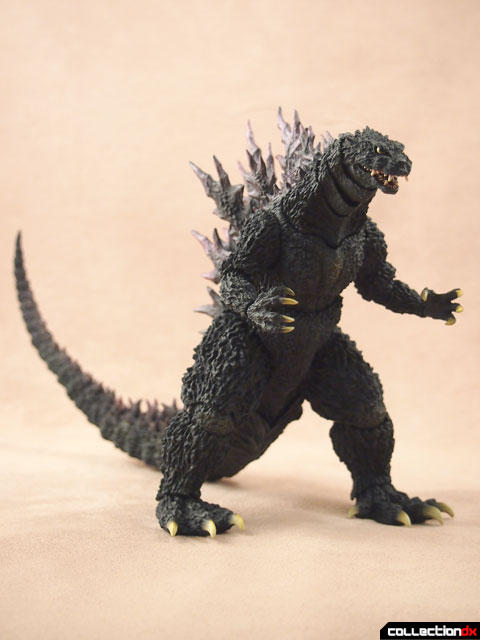 The box is nice - your standard mass-market S.H. Monsterarts box with the clear panels and foil lettering. It's striking on the shelf. The clear plastic trays and plastic wrap make it a bit difficult to see the details of the figure. Why have a window box if you can't see the toy? 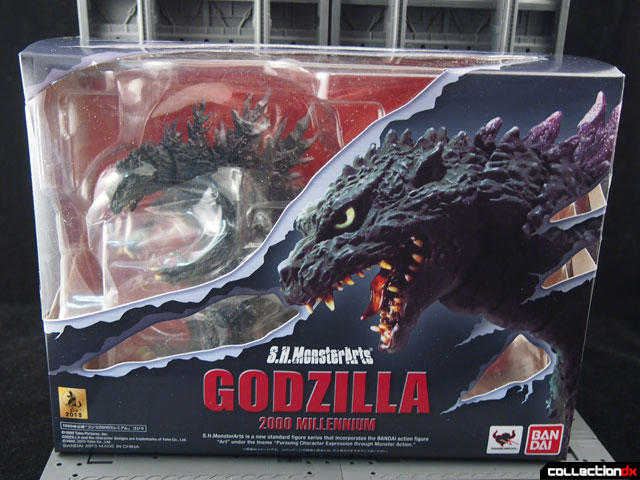 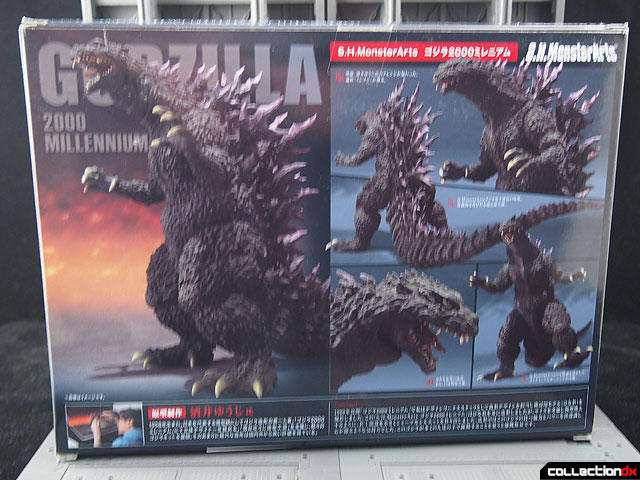 This version of Godzilla is more aggressive and intense than others. The edges are sharper, the face fiercer, the spikes bigger. Sculptor Yuji Sakai has outdone himself here. 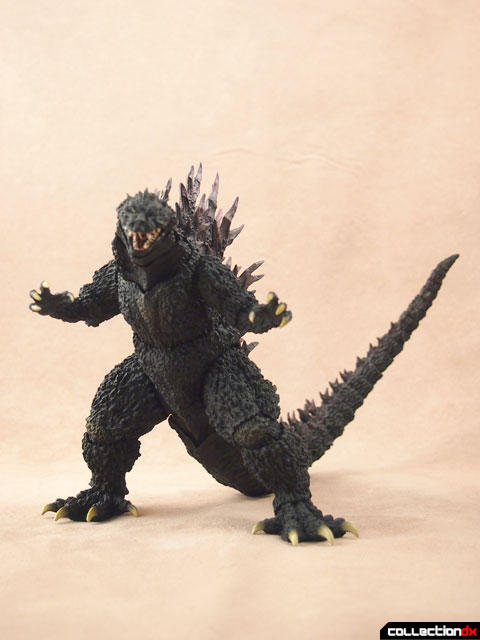 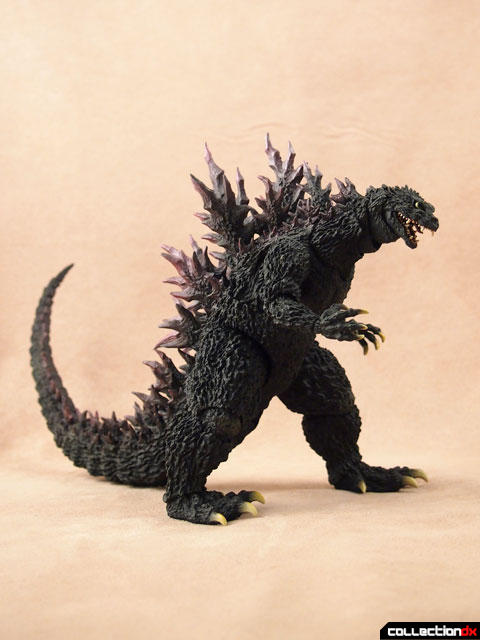 Godzilla stands 150mm tall and 370mm long from head to tail, making him the longest MonsterArts release yet. He has a tendency to hunch over so be sure to straighten him out when posing. 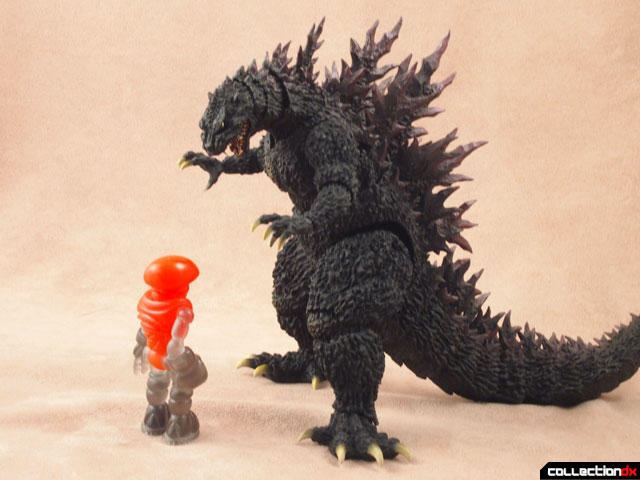 Articulation is good, with a great range of motion in key areas. It can be tricky with SHMA releases to tell which joints are articulated and which are just covers for a larger joint. It is only trough experimentation that you can tell which is which. 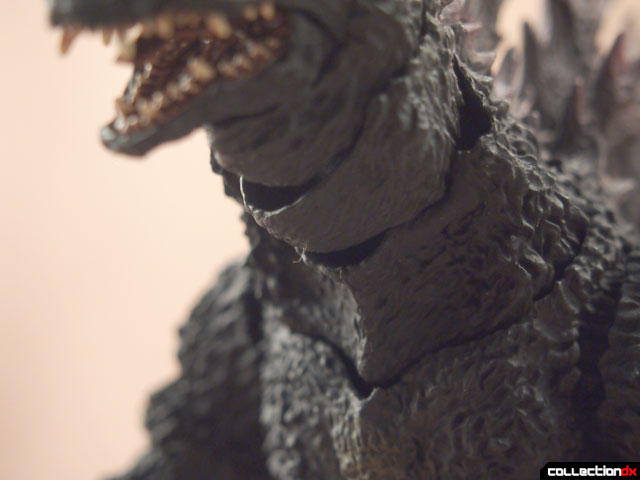 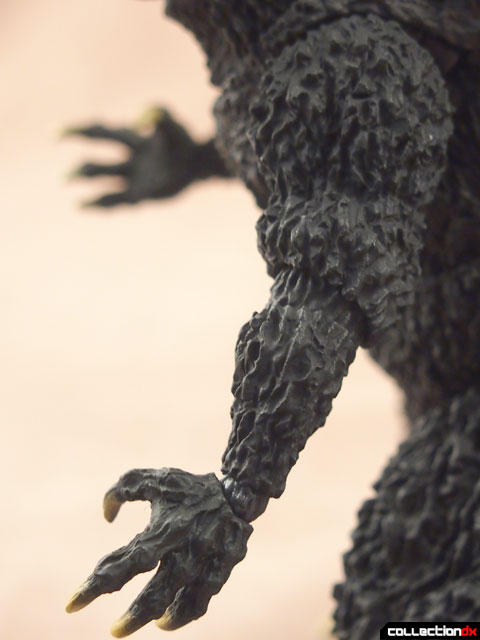 One small quibble with the paneled approach is that still, in some poses, you can see right through the figure. 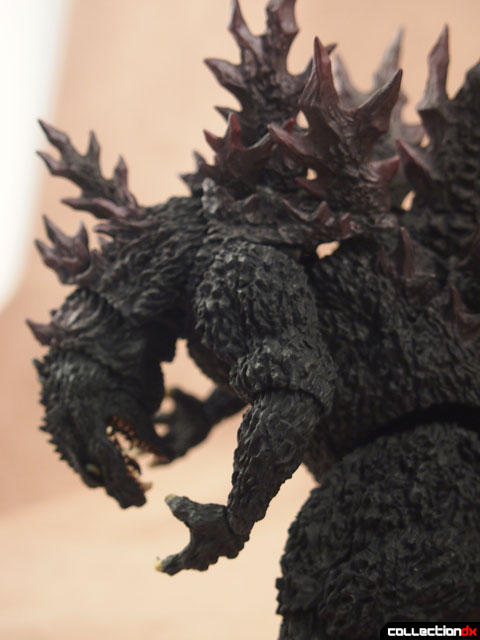 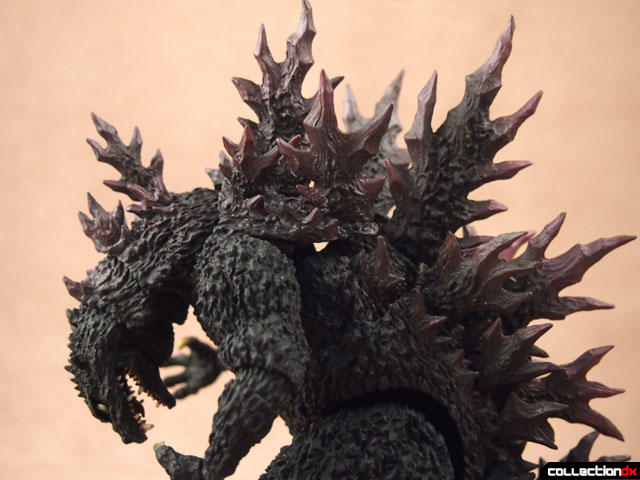 The tail has over 20 different individually jointed segments. The segments hold a shape well, but I found that the tail would pop off at the base of the body easily if I over extended it. 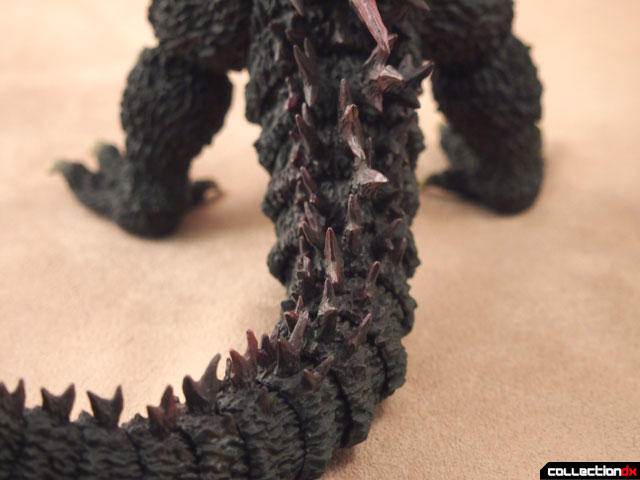 The head is nicely done with no paint issues. The teeth on the front are a little dull. I'd expect for an adult collectable they could sharpen these up. The lower jaw articulates on a ball joint, which sometimes makes for a mis-aligned jaw. Another nice feature is the articulated tongue. Overall though, it's a great release. There's only so much to say about the toy itself when most of it is pretty much spot-on. Once again though I would have liked to have seen effects parts, maybe a crushed Tokyo landscape or something added to the set as the figure itself is bare bones. Why does the Ultra-Act line get all the love when it comes to effects parts? Godzilla 2000 arrives courtesy of Bluefin Distribution. If you want one for yourself, visit Amazon.com or any one of our great sponsors.

3 comments posted
Do You Remember Goji

I just got this figure in the mail yesterday and I can't get over how awesome it is!

Great review, such good memories of this film, especially seeing in theaters on opening night. First time I'd hear a crowd in South Georgia go nuts about seeing a giant monster movie. It more than made up for that 'not-zilla' movie that came out before it. The styling of the Goji suit was such a "F-U" to the American film, capturing the pure raw spirit of what Godzilla really should be at the time.

Whoa- that's a lot smaller than I expected it to be! Wraith Pheyden only comes to his hips!? I was expecting this to be, like, 12" tall.

I love this thing, the only complaint I have is that one of the dorsal plates is bent. He is more poseable in hand than you'd think, though no more than you need. He looks eerily natural in most positions and is one toy best displayed above you or at eye-level. Mine is standing ontop of my DVD shelf in the living room, roaring down and defying intruders to de-alphabetize my anime.

My favorite Godzilla design executed wonderfully... so very happy to have him.