Bunpachy is the hard-headed companion of the equally hard-headed member of the Kyoryuger, Kyoryu Gray. 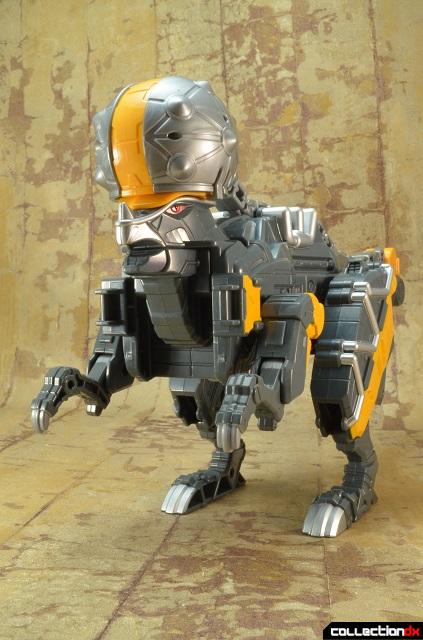 Bunpachy is a Pachycephalosaurus, which were dinosaurs that had long hindlimbs and small forelimbs, much like the Velociraptor and Parasaurolophus. Because of this, the body of Bunpachy is remold of the Zakutor and Parasagun body, much in the same way that Ankydon is a remold of Dricera and Stegotchi. 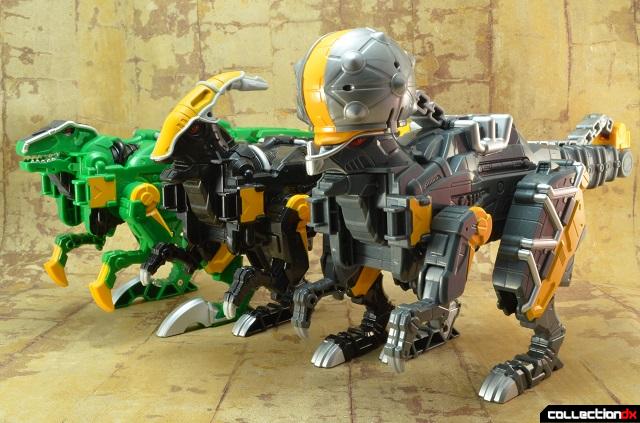 Like most other mecha in the line, Bunpachy suffers from being fairly flat on the sides. 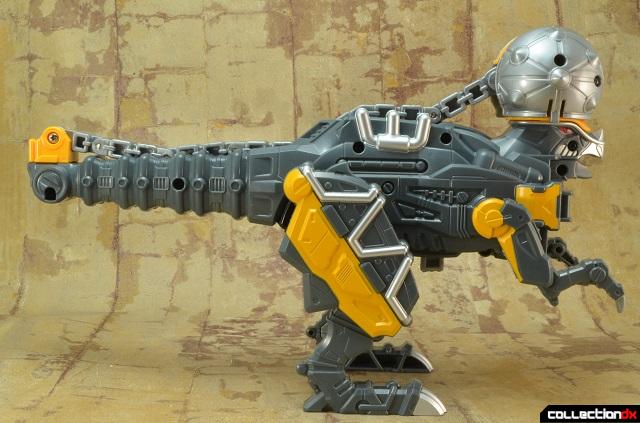 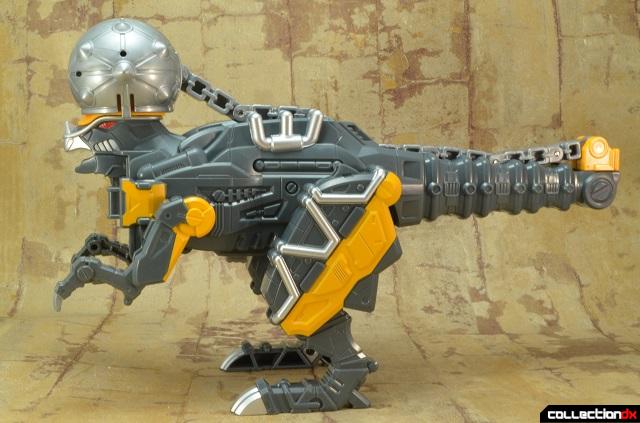 Although it is a remold, the toy does a good job of capturing the features of the dinosaur, including the Pachycephalosaurus’ large, bony dome atop its skull. 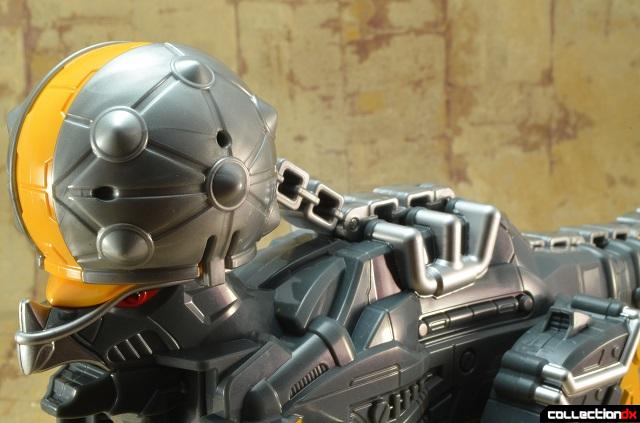 Although Bunpachy’s grey color does not hide the fact that the toy has a hand on its underside, the grey scheme compliments it a heck of a lot better than the bright colors of the other arm mecha.

Bupachy is the 4th release in the DX Jyudenryu line of auxiliary mechas. However, it is not actually Jyudenryu number 4.

As you can see on Bunpachy Jyudenchi (Beast Battery), he is number 8 of the 10 great Zydenryu. Each battery has a couple of play features. One is that the button on top of the battery can switch the panel inside of the battery. 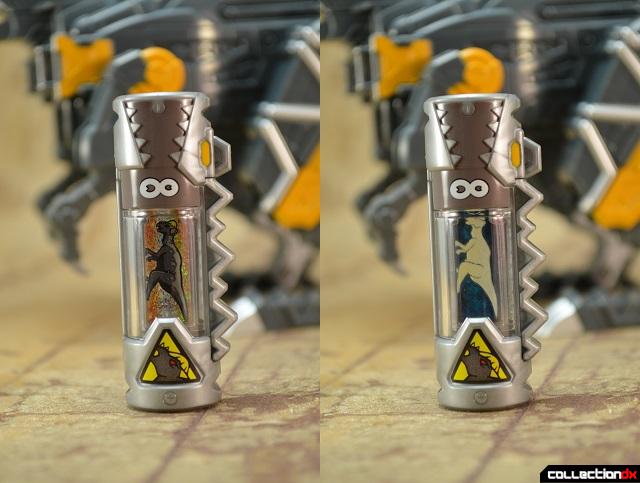 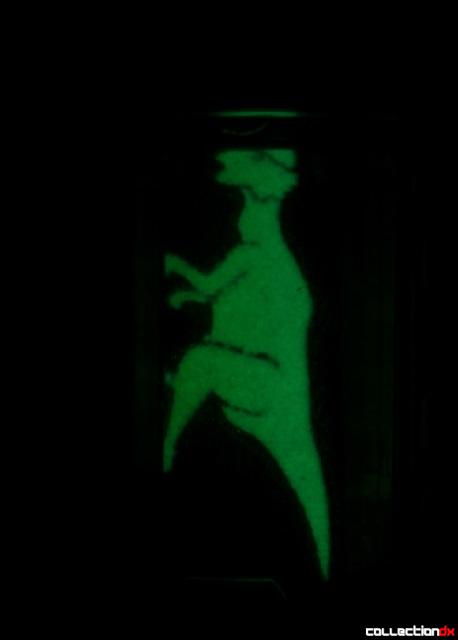 This is a pretty cool, low-tech way of representing the fact that the batteries are storing energy. I feel a bit dumb for having overlooked this feature, which I discovered only by accident with this battery. I am sure that this feature is probably explained in the manual. However, since I do not read Japanese, I feel a little less dumb for not noticing the glow-in-the-dark feature of the battery.

Another feature of the battery is that you can cram it down Gabutyra’s mouth and it will give you the corresponding sound for the battery which is “Gaburincho! Bunpachy!” 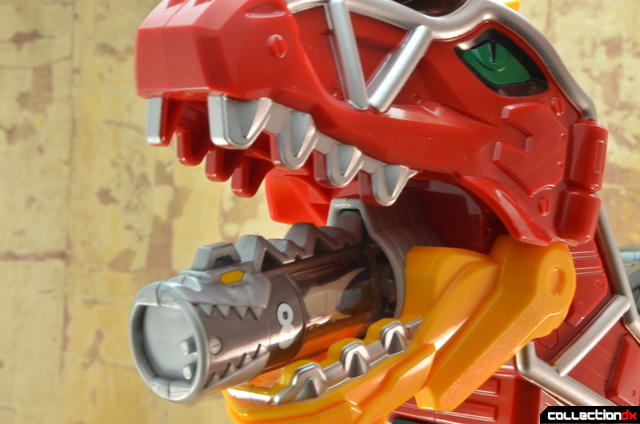 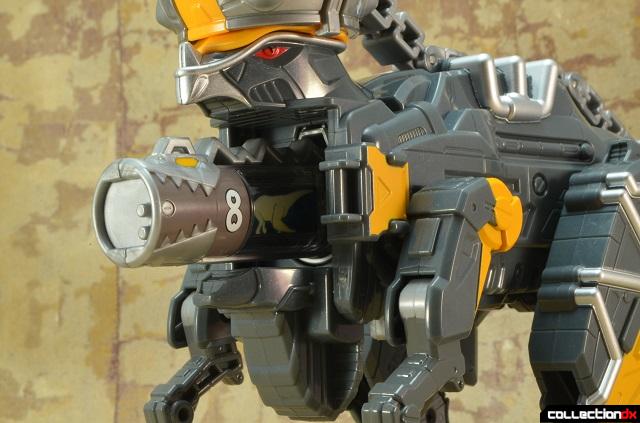 This causes a tab on the hard hat under the dome to release the dome, which is attached to a chain on the tail of the mecha; the chain and spiked ball become a flail for the mecha. 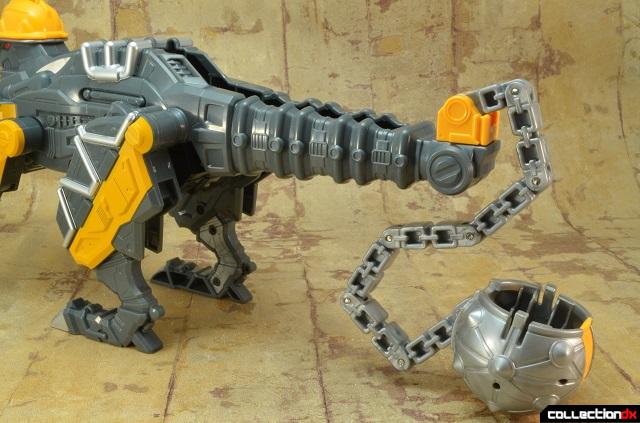 Inserting the battery does not completely deploy the weapon, which is a bit of a disappointment. Having to manually pull the chain back is much less exciting than if the toy did it for you. 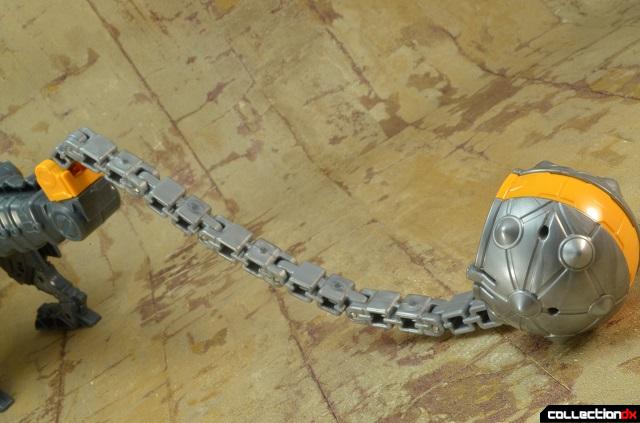 The flail is neat because it gives the dinosaur extra length and the weapon is not confined to staying near the body of the dinosaur. The flail can actually rotate a full 360 degrees around the body, thanks to the yellow connector piece, which appears to be on a ball joint, on the tip of the tail. So kids could effectively use this toy as a real plastic flail. Talk about your unintended roleplaying toys! 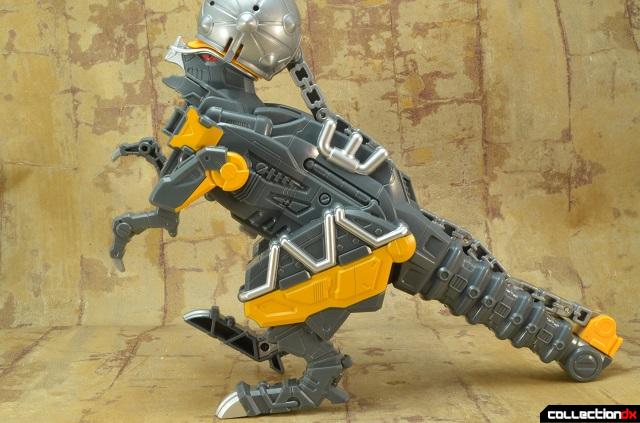 In order to prepare Bunpachy for attachment to the Kyoryuger, you simply have to fold back the legs of the toy and then tuck the arms into a recess on the back of the legs, and release the battery from its chamber. 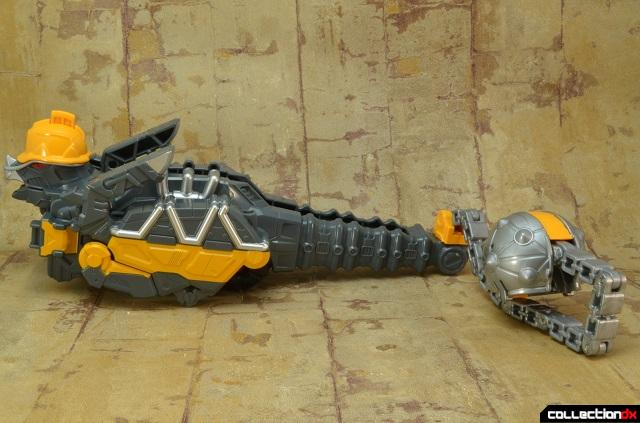 For today’s transformation, Bunpachy is going to be accompanied by Ankydon.

While you can just attach the mecha onto Gabutyra to form the combination that is unique to Ankydon and Bunpachy, it is a bit more special if you go through the battery swapping to elicit the sounds of this combination. The process is as follows:

-Remove Gabutyra’s battery
-Have Gabutyra read the battery for Ankydon and Bunpachy
-Put Gabutyra’s battery back in.
-Then you press the button on Gabutyra to play the combination samba jingle.
-Once you attach Ankydon and Bunpachy, you hit the button once more to hear the Kyoryujin plays a Chinese jingle and say:
“Kyoryujin Kanfu( Kung Fu) Acho!!”
To which want to reply, “bless you!”

Since Bunpachy’s weapon is a flail, it should be no surprise to anybody that this dinosaur becomes a flail weapon for the Kyoryujin Kung Fu combination. 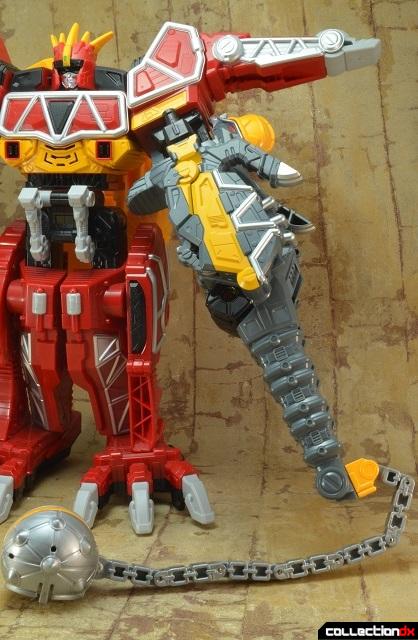 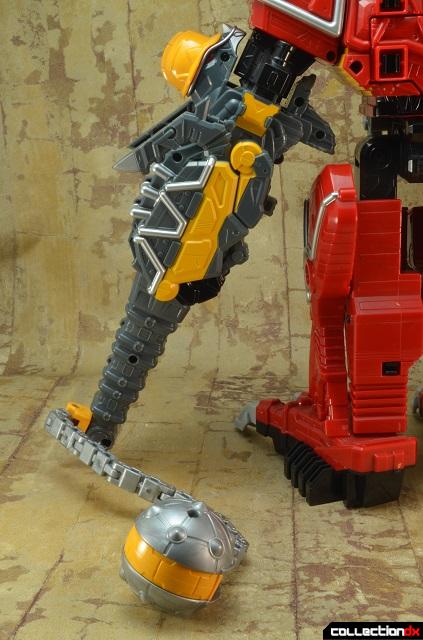 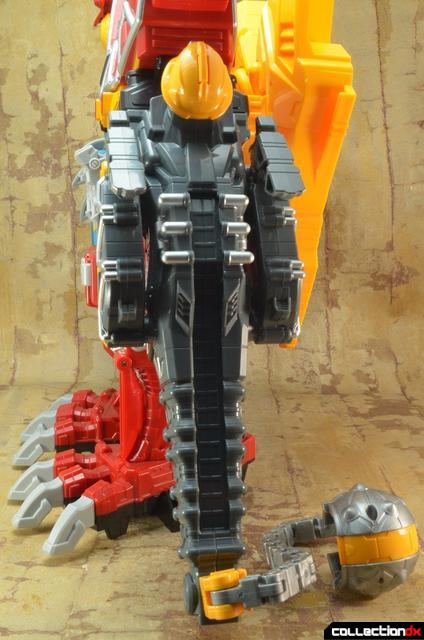 The arm can be lifted up, thanks to the shoulder joint on Gabutyra. This will lift the flail off the ground. However, it doesn't really act much like a flail, since the ball just dangles on the chain. You can move the Kyoryujin from side to side, which will swing the flail. However, this ends up acting more like a pendulum than a flail. 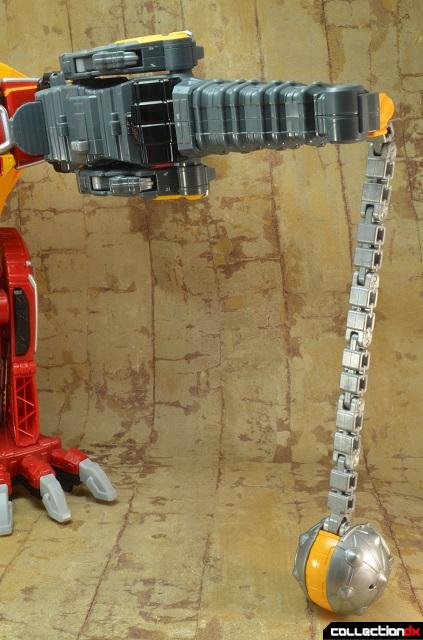 Although at first, the inclusion of a flail may be a bit odd for the Kung Fu themed combination, it actually makes sense because flails are weapons that were used in ancient China. 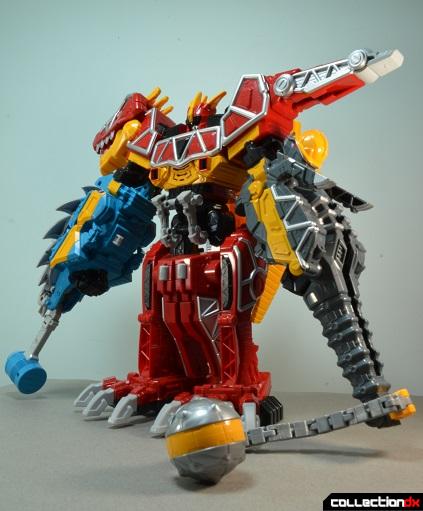 Hammers, on the other hand ( no pun intended), have also been used for martial arts. Although Chinese hammers look a bit more ornate that the toy-like hammer of Ankydon.

Inserting Bunpachy’s battery back into Gabutyra after the Kyoryujin has been formed, which requires dummying of Bunpachy’s battery in one manner or another, will cause Gabutyra to go,” Gaburincho! Bunpachy”, which is followed by a faster samba beat. After that, pressing the button on Gabutyra’s side (the Kyoryujin’s chest) will produce the special attack sounds for Bunpachy:

“Vamola Much! Bun Bun”, followed by the sounds of chains and gunshots.

All in all, this makes for a decent combination and an okay toy. To be quite honest this was a review that almost did not happen. Since at this point 6 of the 8 mechas in the line use 2 molds for the body, I had become tired of the reviewing essentially the same two dinosaurs with different weapons. So I almost canceled my pre-order for this guy. However, in the interest of reviewing all of the DX Jyudenryu, I begrudgingly decided to forge on with this review.

So did this toy win me over? Not really. Since it brings really nothing new to the table, except for the unique weapon gimmick, I am still left wanting a unique experience from this mecha. Lucky for me, the next Kyoryuger review that I will be doing is Pteragordon, since I don’t think I could stand doing a review of another remold! So Bunpachy is a mecha in the line one that people can skip, unless they are completionists or have a particular adoration for this mecha. 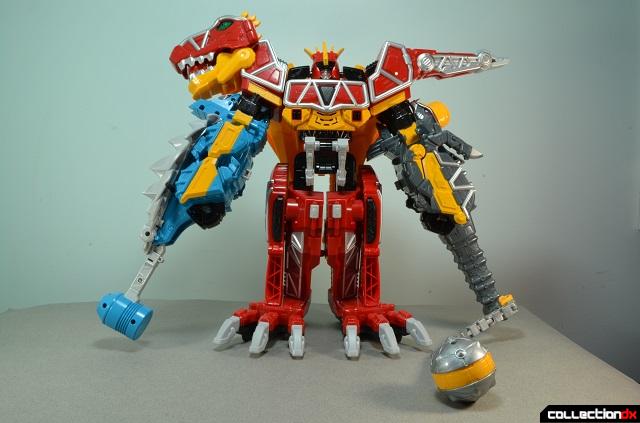 Holy crap a Pachycephalosaurus with A FRACKIN WRECKING BALL FOR A FOREHEAD!

Darn, those Kyoryuger feet are ugly as hell...

I got the Power Rangers samurai megazord, it was a block of plastic that just move the arms up and down.... i sold it by the minute I opened...
¿Are these japanesse counterparts the same?.... I mean, statics... articulated-less???

In general, the individual mecha in the Japanese Super Sentai line have more articulation than the American versions. But when you combine them, most of them end up being big plastic bricks. In this line, the Kyoryujin and Pteraiden Oh ( which I have yet to review), actually have some good articulation in the legs.[G2:680047]