The DX Jet Scrander Set for the DX Soul of Chogokin Mazinger Z is a must-have if you already have the Mazinger. Not all accessory sets are worth getting, but this one adds so much to the toy.

Of course, here in the states we all hate the idea of the Tamashii Web Shop exclusives. Thankfully Bluefin is able to bring some of them over for direct sale to US consumers. While this is awesome, not every Tamashii Exclusive is offered due to license restrictions or lack of demand.

I'm glad this piece was offered, as it makes an already awesome toy so much greater.

The Jet Srcander is a jetback that allows Mazinger Z to fly. He gets it later on in the series along with a Pilder upgrade which is also included.

The outer box is the brown Tamashii mailer box, but inside is the more traditional SOC box. It's impressively large, and if you think you're just getting wings you are in for a surprise. 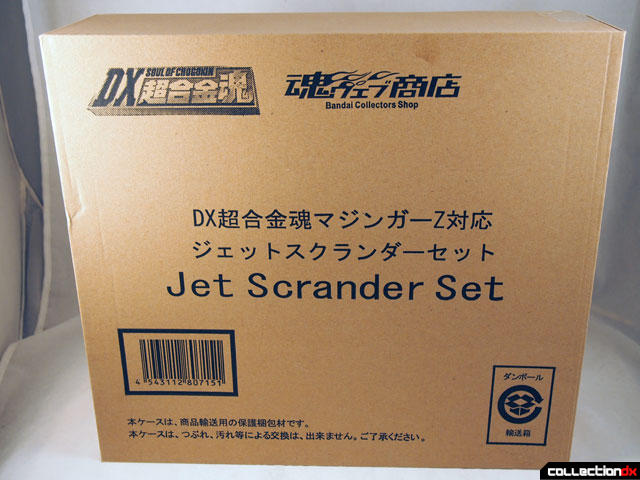 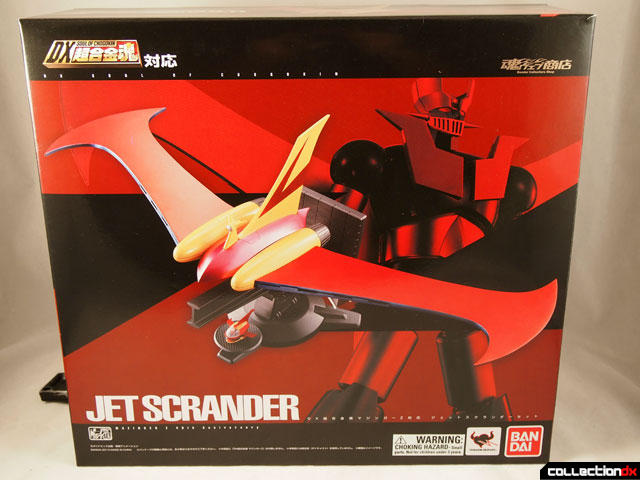 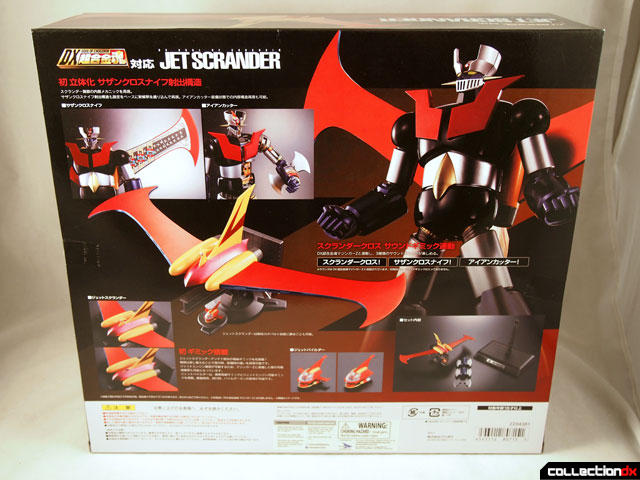 Included in the set is:

The Jet Scrander has an enormous wingspan of over 14 inches. It's really insane how much more presence this adds. The wings need to be attached before you put it on, but once you clamp the belt around the waist and align the pegs in the back the set holds securely. 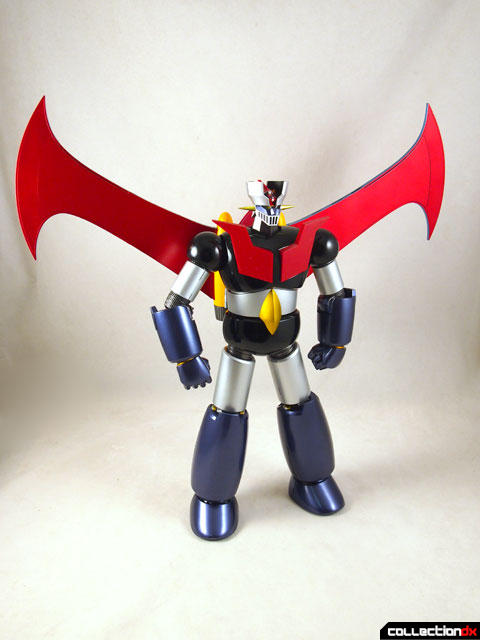 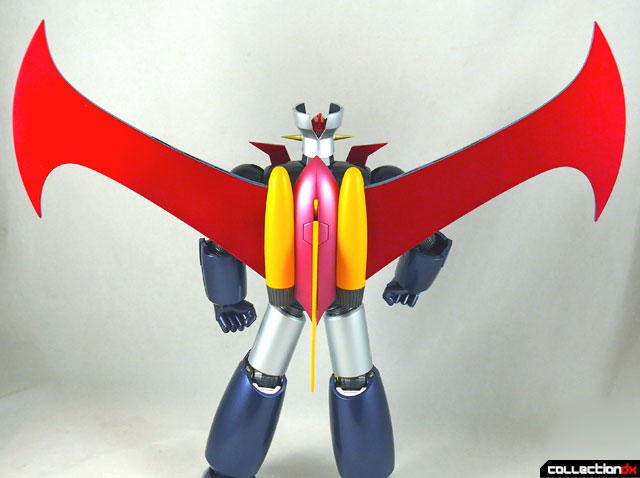 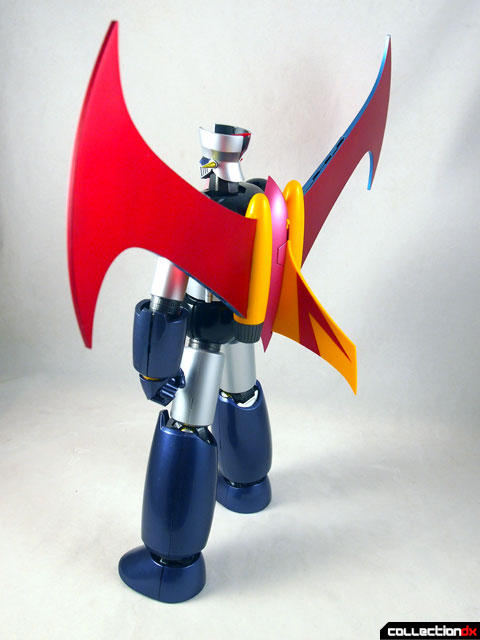 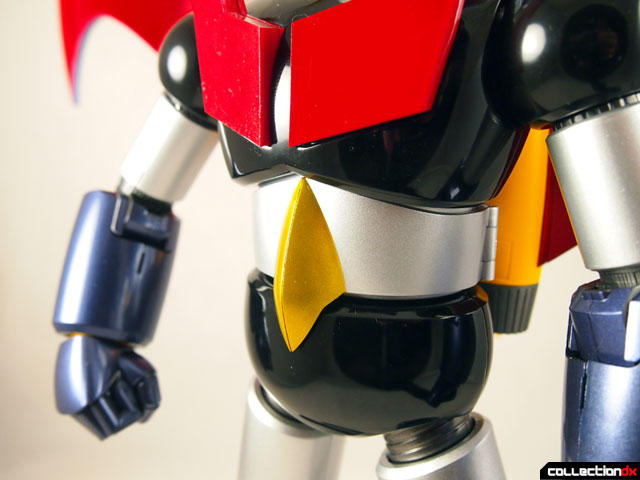 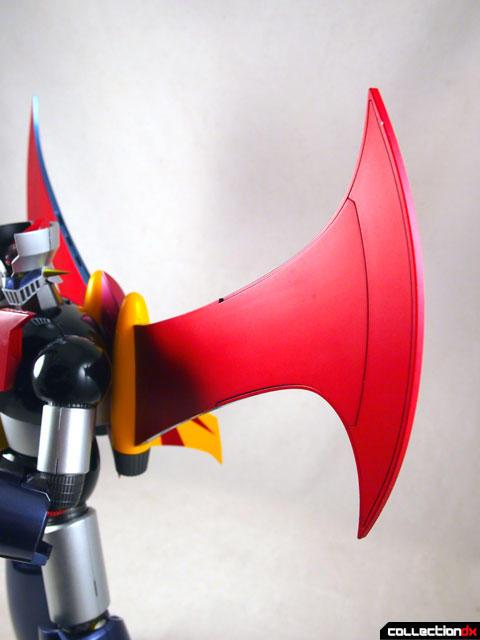 The wings have the ability to pivot a small amount at the jet engines. 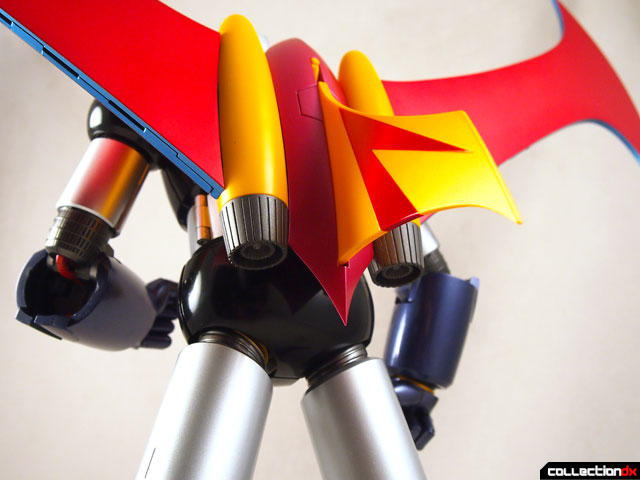 When not in use, you can mount the Scrander on the launchpad display base. In the show, the Jet Scrander would be launched separately from the same base when Mazinger needed it. In the animation, the wings would launch while swept back, and would swing forward when docked. The way Bandai achieved this effect is to make the wings reversible. you have to remove and re-attach them to get them to look right, but it works great. 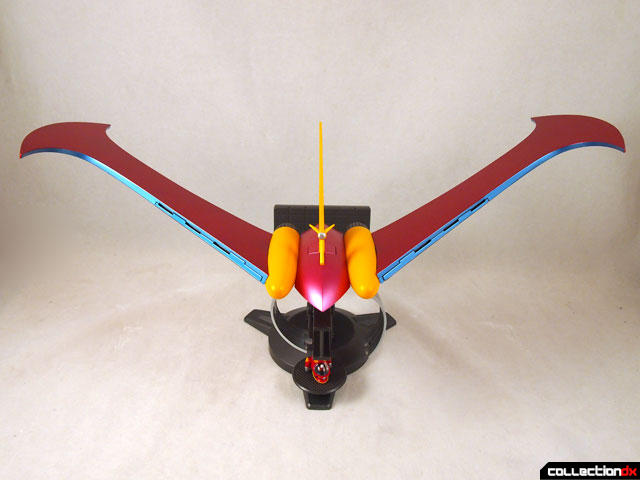 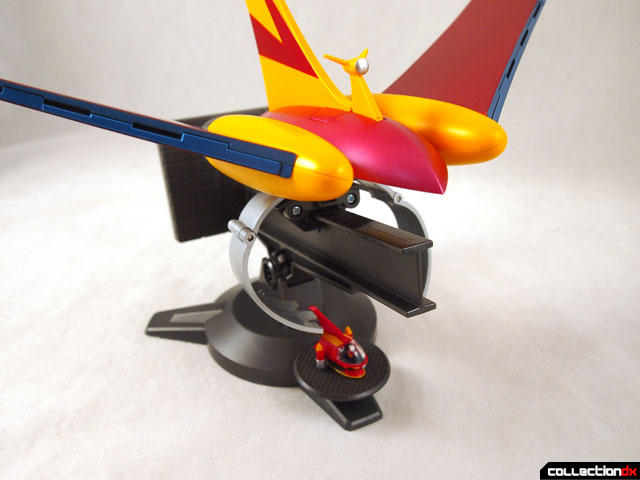 The Scrander attaches to a module on the rail of the stand and will only rest with the wings swept back. if the wings are forward, the Scrander will topple off the stand. 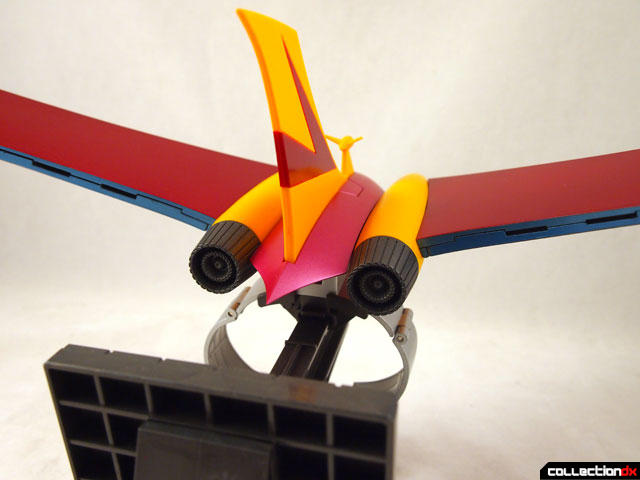 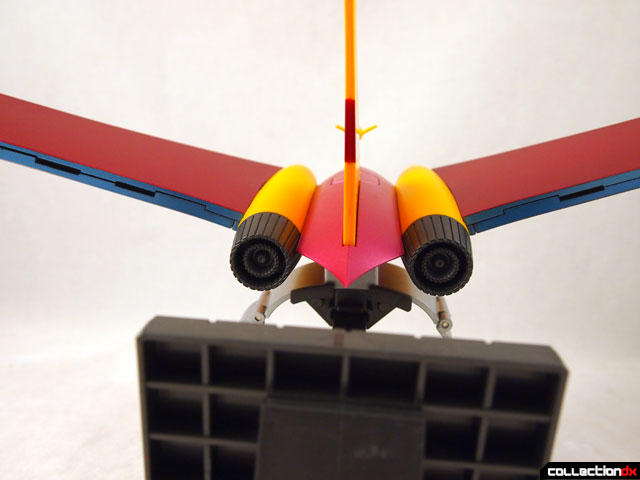 The back fin of the scrander tilts open to reveal the control tower. This tower is visible in flight but hides away when docked with Mazinger Z. 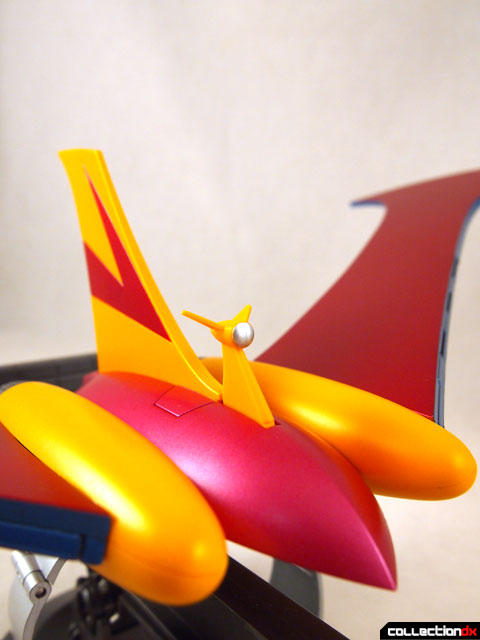 The Jet Pilder is the upgrade to Koji Kabuto's Hover Pilder. This control ship now uses jets instead of fan blades for propulsion. The miniature pilder has moveable wings and articulated side jets to dock in the appropriate position. Despite the tiny size, all details are sharp. Please note that when extending the wings, you need to pull them back first before they will swing out. 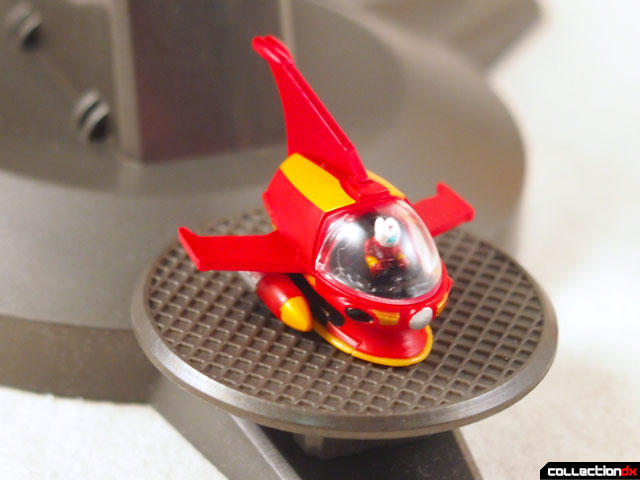 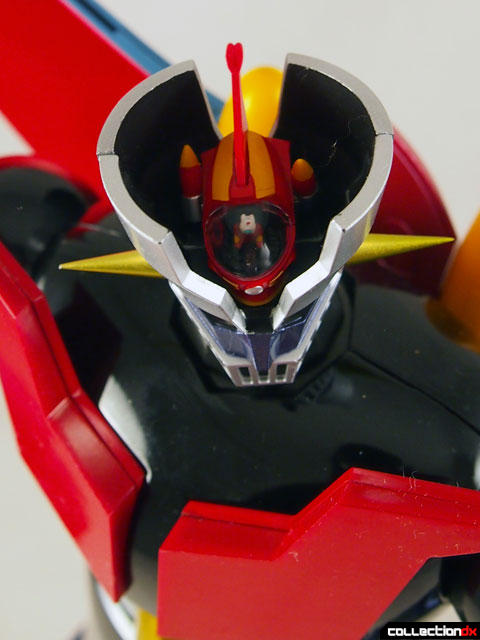 The Iron Cutter Fists were another notable exclusion from the DX Mazinger Z set. I'm glad they are included here, as they add more value to this set. The blades are large and sharp, although entirely plastic. 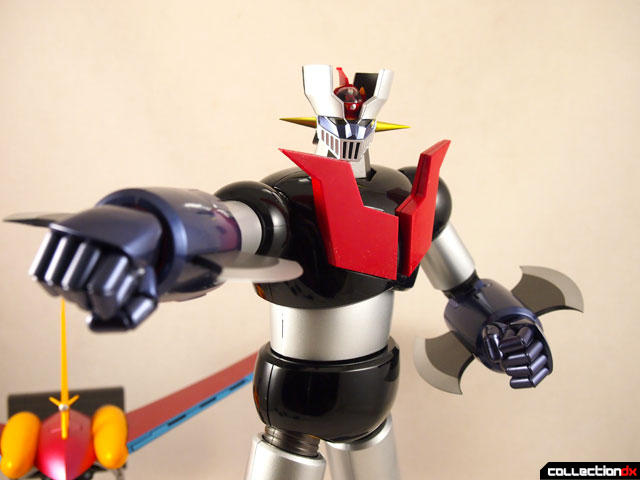 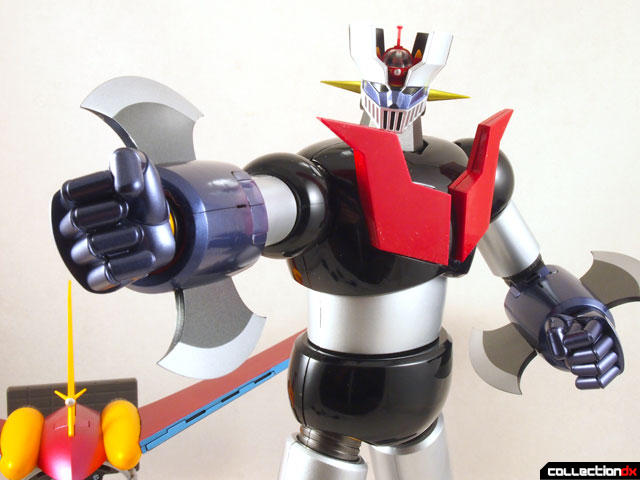 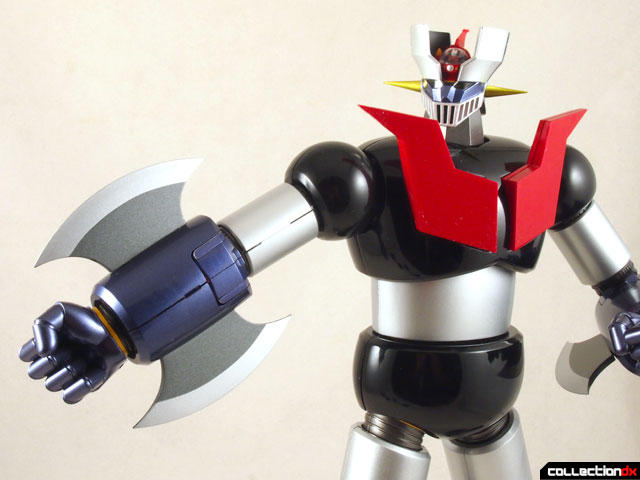 What if you want to display your Mazinger in it's half-armored mode? Bandai has you covered with some extras in this set. Two blank Iron Cutter arms are included so you can attach the cutters to the arms with panels also removed. 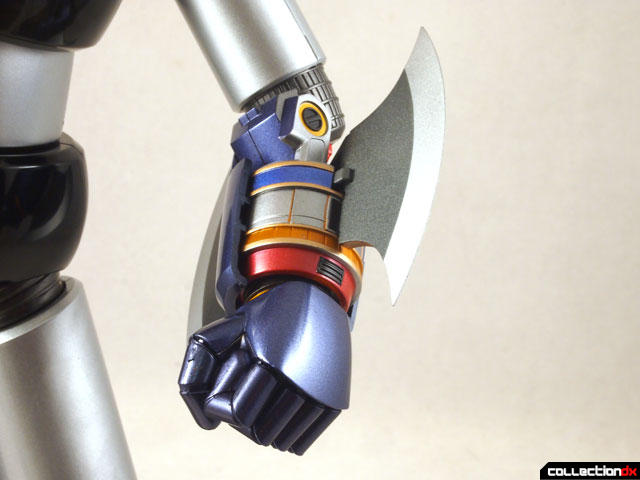 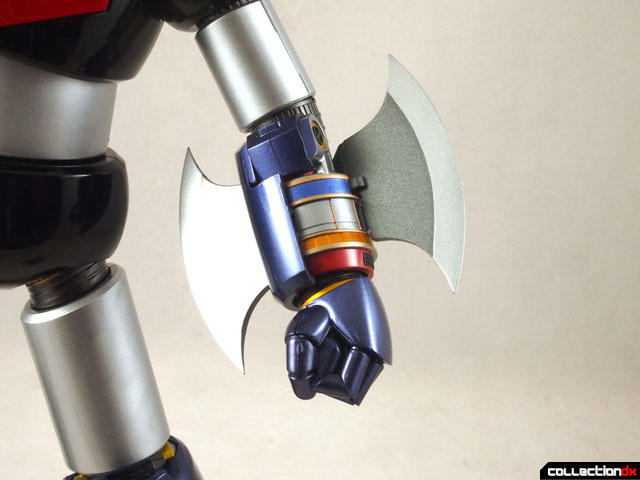 The wings also have removable panels to reveal the inner mechanisms of the Jet Scrander. The only thing that looks odd is that the belt has no removable panel, making for a solid part in an otherwise armor-less display. 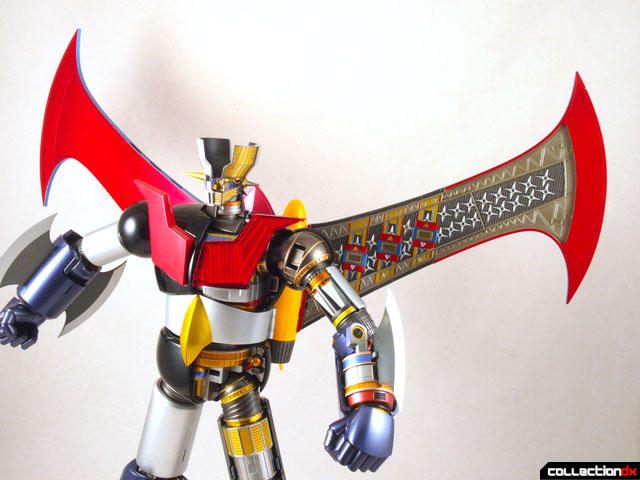 The last part is a display stand for Mazinger Z while wearing the Scrander. The original set came with the giant hangar base that while cool, was a bitch to display the figure in. The Scrander cannot fit in the base (and does not connect to it in any way), so a new stand is included. This one has a long support arm that attaches the the bottom of the Scrander and holds the figure securely. A new metal nameplate us also included (not shown in photos). 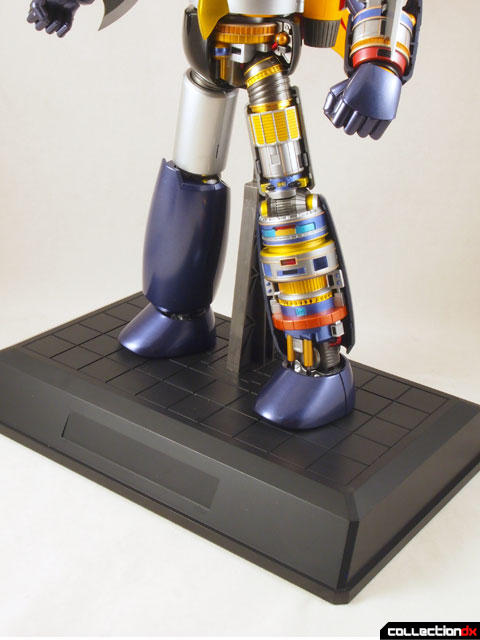 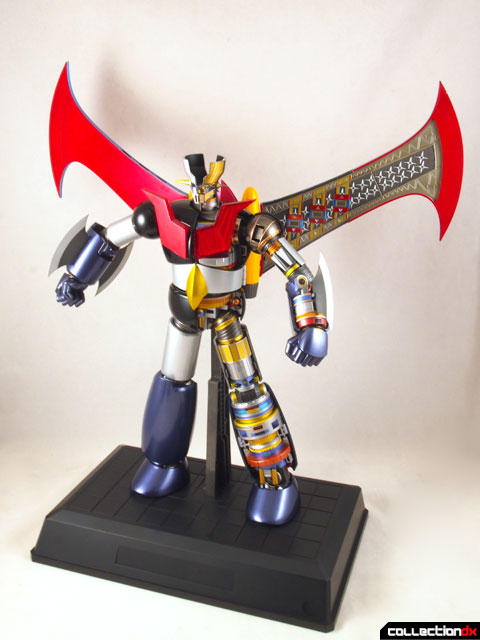 Overall, it's a really great set. If I was going to complain at all I would mention the lack of any ability to attach the Scrander to your existing hangar base. It seems like a no-brainer to be able to clip the stand to the base. Also it would have been nice if the Scrander had light up engines. Bandai has done this recently with their Space Battleship Yamato releases, and it would have been a nice addition here.

This set is highly recommended if you have the DX Mazinger Z.

Both are available as a set from Bluefin Tamashii Nations Premium Store.

2 comments posted
The belt that attaches the

The belt that attaches the Scrander will scuff the finish on Mazingers abdomen after being on for a while.

The funny thing for me was I bought the Scrander first as motivation to get Mazinger.

It would be so fantastic if Bandai could sell all the tiny vehicles from sets like this and monsterarts etc in a big booster pack. Their perfection at that tiny size is unrivaled.