Cup of Fuchiko or コップのフチ子 is a series of Gashapon toys created by manga author Katsuki Tanaka in collaboration with Kitan Club featuring the titular Fuchiko-san; a dead eyed looking OL (office lady) sitting on the edge of a cup. The name Koppu no Fuchiko is a bit of a play on words, literally translating Fuchiko’s cup, while ‘Fuchi’ can also be read as edge, translating to “edge of the cup.” While English language information on the series is rather limited, with most sites rehashing the same few tidbits, what is known is that Fuchiko has become somewhat of a cultural phenomenon with sales exceeding 4 million units as of last September. Spawning a variety of recolors and spinoff series, crossovers with mascots such as Hello Kitty and Funasshi, and even a café, Cup no Fuchiko seems to have secured its place in Japanese pop culture. 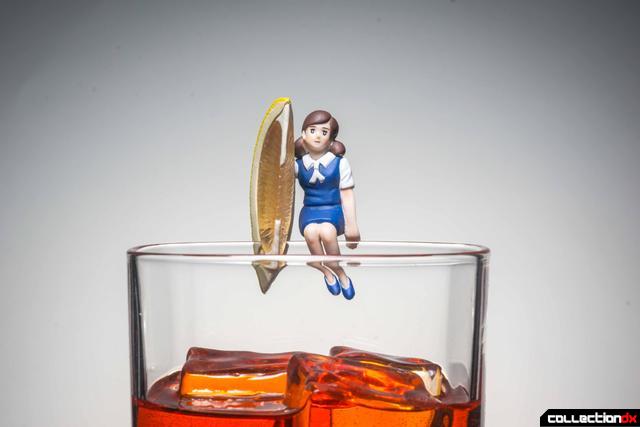 I first encountered Cup no Fuchiko on a trip to Tokyo in October of 2013. I had kept seeing her in Gashapon machines everywhere I went as well in most of the toy stores I had hit up, but it wasn’t until my last day in Japan that I decided to use up some of the remaining 100-yen coins to buy a few before I left. Once I got home, I immediately proceeded to buy a full set online.

As a fan of sad looking toys, Fuchiko immediately appealed to my interests. I generally don’t talk about toys too often with friends but I found myself sharing Cup no Fuchiko with everyone I know. There’s nothing like pulling out Fuchiko in the middle of a meal and seeing the reaction on their face.

While Cup no Fuchiko series 1 has been released in a variety of colors, I will be using the navy version for this review. Fuchiko is generally sold in Gashapon machines for 200 yen, though she is also available for purchase in blind boxes that come 12 to a case. There are 6 normal figures and 1 secret figure in each series, so unfortunately buying a full case does not guarantee two full sets. Each of the Fuchiko figures is named, so the following will be rough translations.

Hanging Fuchiko (Burasagari Fuchiko) seems to be stuck in some sort of predicament. How did she end up like this? Is she doing this for fun? The design of the figure works great on all cups and edges without any difficulty. 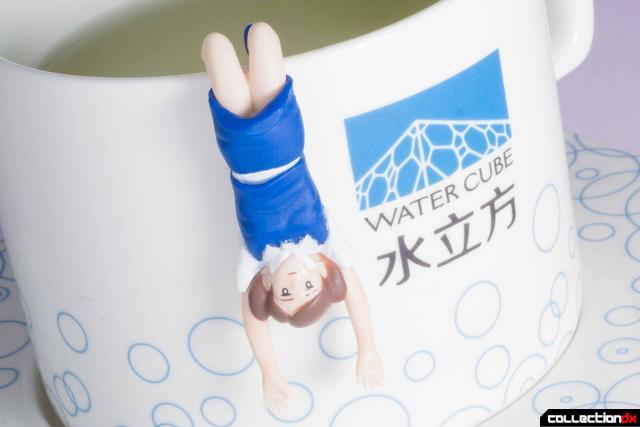 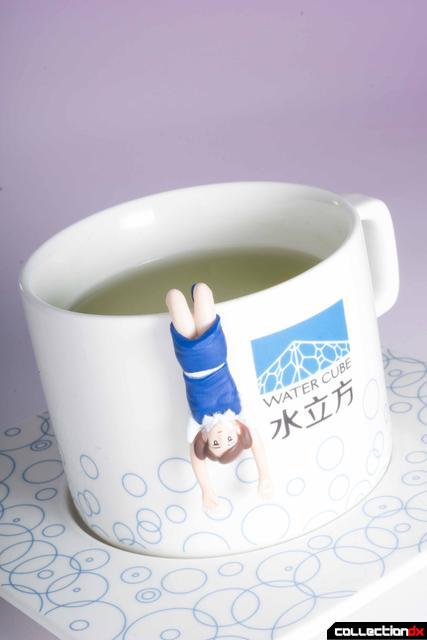 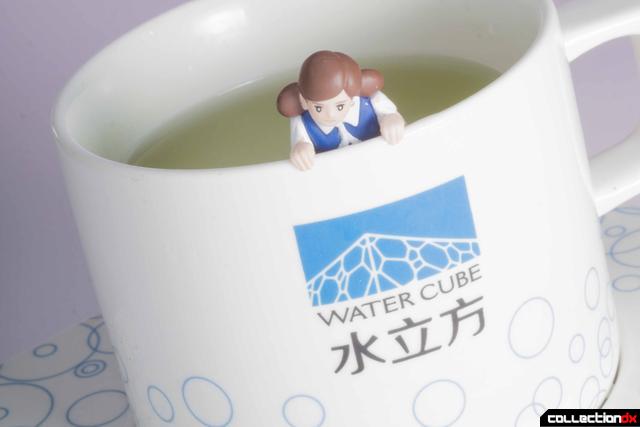 Sitting Fuchiko (Suwaru Fuchiko) and Lemon Fuchiko work similarly, and require her hands to cling onto the edge of a cup or edge to help her sit up. Lemon is probably my favorite figure of the series. 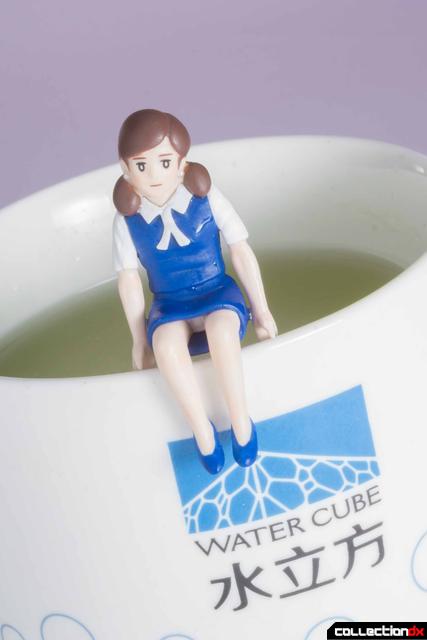 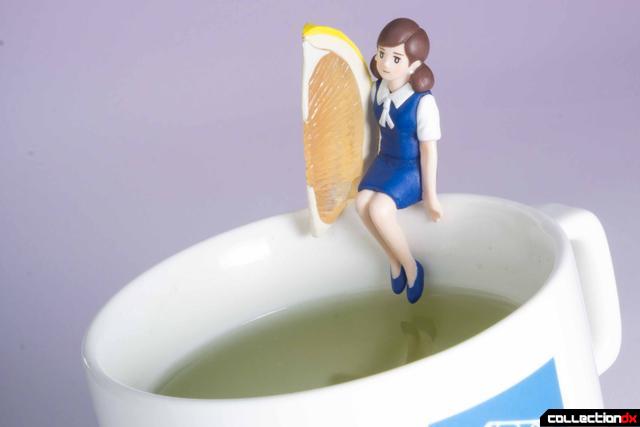 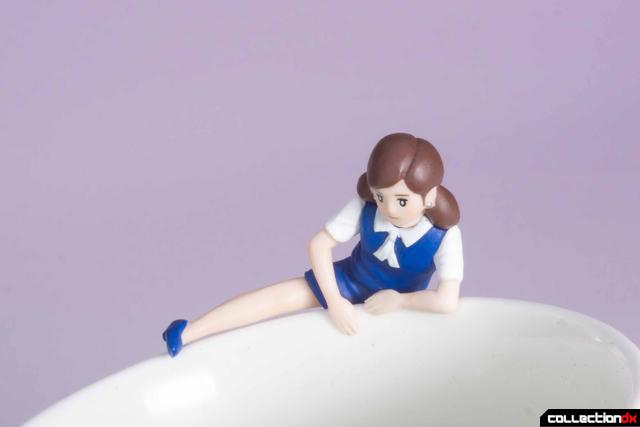 Balancing Fuchiko (Baransu Fuchiko) is probably the most difficult figure to set up in the series. Balancing on the cup requires a bit of patience and easily falls over with any movement. 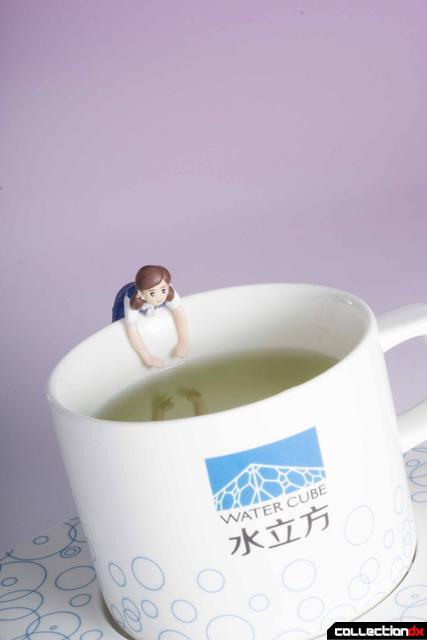 Summer Fuchiko (Natsu no Fuchiko) is the secret figure of the series. Wearing a silver bikini, she is supposed to lay flat on the edge of a cup but tends to not stay in place too well. It’s easier to just have her hanging over the edge instead. 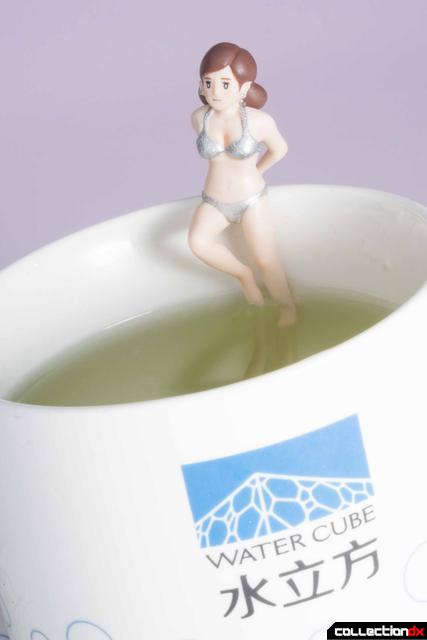 At 200 yen each, Cup no Fuchiko is worth picking up on a whim by anyone with a passing interest. The designs are quirky and unique, and the quality of the figures is superb. Paint application is crisp and clean and there are no flash marks or obvious mould lines. 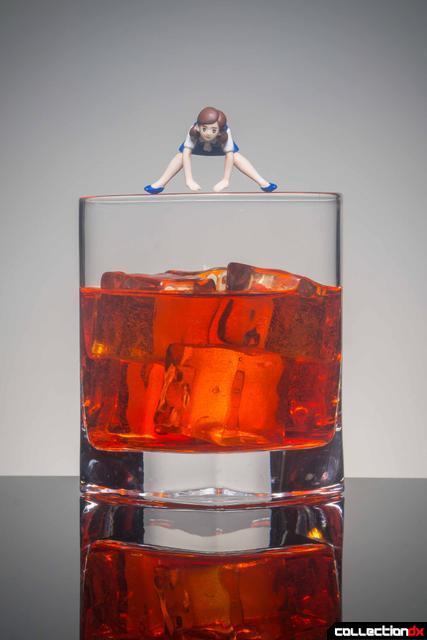 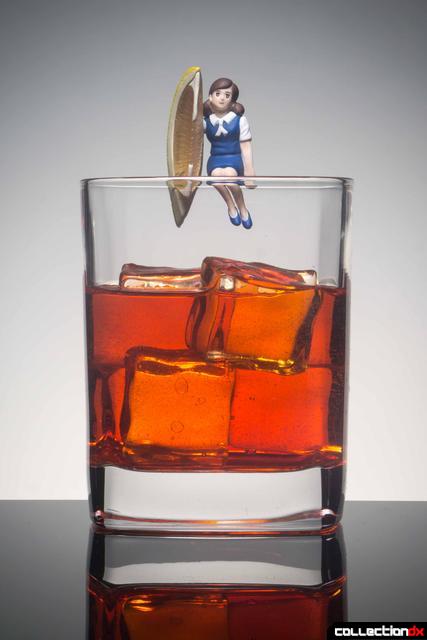 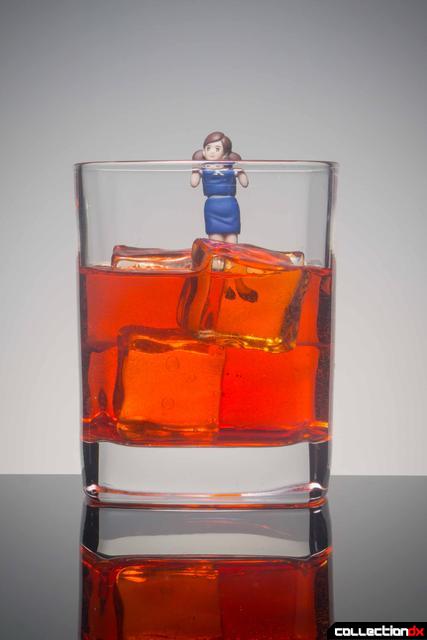 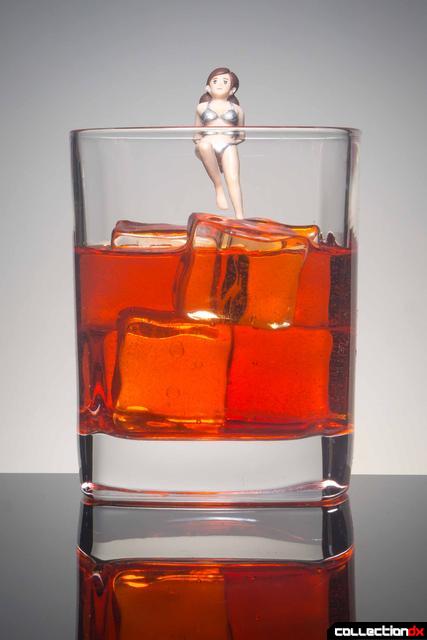 I really can’t think of anything negative about the Fuchiko figures though trying to buy them can be quite a hassle. The popularity of the figures means that prices on eBay can be almost two or three times as much as they cost retail. AmiAmi is the only online retailer available to westerners that I know of to sell cases of Fuchiko but they tend to sell out very quickly. Rereleases do happen occasionally but I have only seen navy color release online.

Personally, I think Cup no Fuchiko is one of the most creative Gashapon toys released in quite some time. She already looks incredibly silly in her poses, but imaginative people can create all sorts of interesting situations with her. In a time where every meal is Instagrammed, Cup no Fuchiko fills the role of the perfect photo accessory. Everyone should by Cup no Fuchiko figures. This is the greatest toy line that no one outside of Asia seems to have knowledge of. In closing, I will leave a video of Fuchiko promoting movie theater manners.

I was in Japan back in June this year and she was *everywhere*! I told some of my friends about them and they immediately wanted some. One of them lucked out and got the bikini version (red though this time); I've had to make do with a sort of hands up gesture with an inclined head - I don't think you have that version, possibly a newer release...?

Theres also a sort of companion figure of a slightly creepy guy who may or may not be stalking her...

Are you thinking of this one? She's from series 2.

...shes got her hands almost touching, as if shes about to start praying.

Oh are you talking about this one? She's from series 2 too.